On Monday we left Carlsbad, NM and headed back to the southwest on US 62, the same route we used a few days earlier to get to Carlsbad.  The road provides some great views as you pass down along the Guadalupe Mountains. 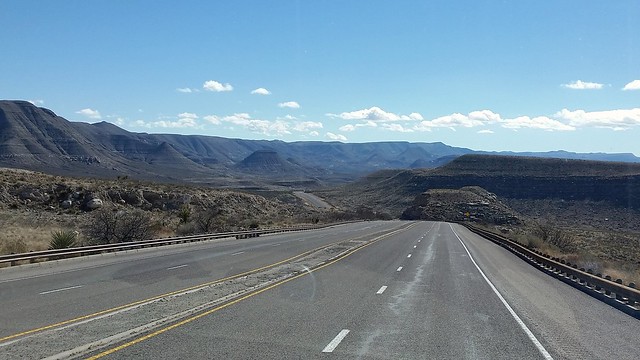 Us 62 in the Guadalupe Mountains

After about 140 miles we came to the entrance road to Hueco Tanks State Park and  Historic Site, just east of El Paso. 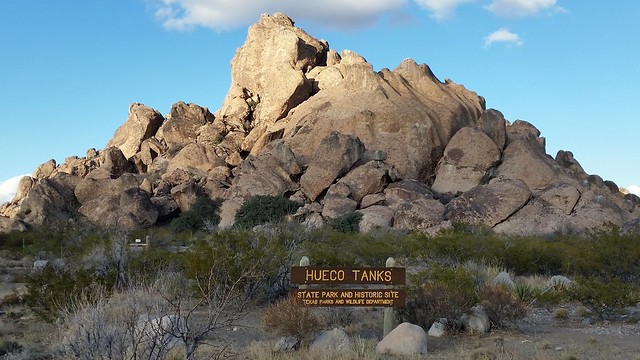 Hueco Tanks State Park and Historical Site has 16 RV and camping sites with water and electricity, many long enough for a large motorhome.  We just made the decision to come here over the past weekend and the reservation site was closed so we couldn’t be sure of getting a spot.  But we called the office in the morning before leaving Carlsbad and were told there were some spots available.  Once there we found they did, indeed, have a spot that would fit our motorhome.  After registering but before going to our assigned site, we were required to watch a 15 minute video about protection of the fragile resources of the park.  Once finished with registration and the video, we headed into the campground, stopping at a gate at the entrance to the campground section of the park that requires someone to manually open and close it. 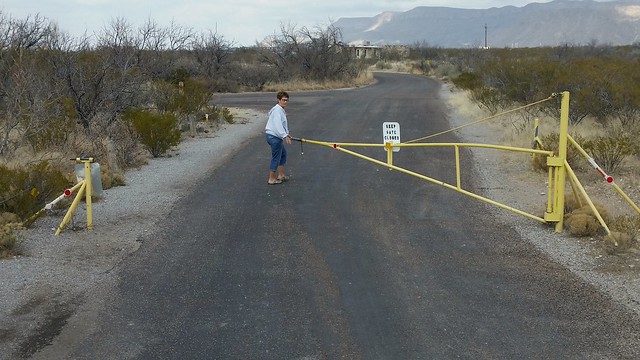 We found our site (#3) to be very long, with a covered picnic table. 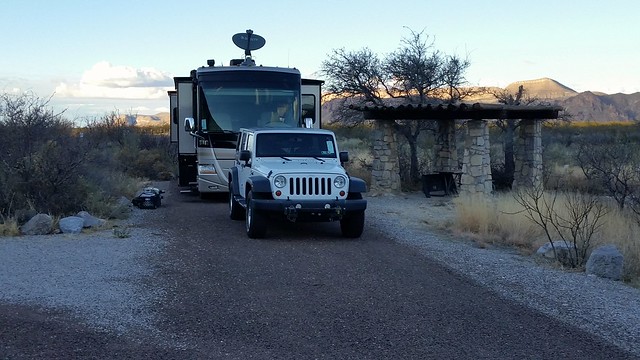 This small state park is popular for birding and bouldering, and is culturally and spiritually significant to many Native Americans.  It contains over 2,000 interesting pieces of rock art, mostly hidden in small caves under huge boulders.  To protect the fragile environment the park only issues entrance permits to 70 people per day.  Ten permits are reserved for people in the campground on a first come first served basis but campers must present themselves at the park office by eight in the morning.  We had heard that these go quickly so we were up and at the office just a little after seven.  We were pleasantly surprised to find that the sun rises in the east about this time, and apparently does so every day!  Who knew? 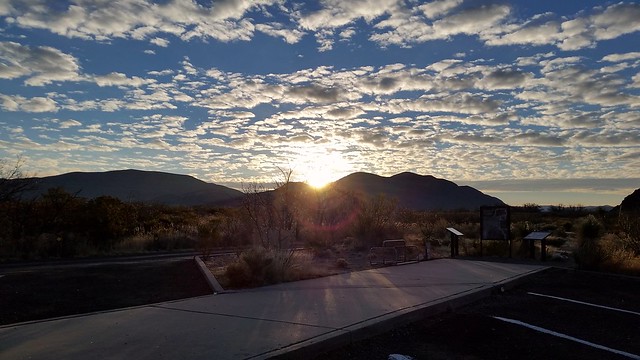 There were only nine people seeking permits that morning so we could have waited to arrive until eight, but then we would have missed the sunrise.  Permit in hand, we headed back to the motorhome to enjoy breakfast and wait for the temperature to reach a reasonable degree.

Once up on the rocks our first goal was to find the Cave Kiva, a small, hidden cave with some interesting rock art.  To find the kiva we went to the park headquarters and asked for directions.  We were given a one page set of directions and were required to leave a driver’s license to secure its return.  The paper described two rock formations to follow after climbing a ridge behind a picnic shelter. 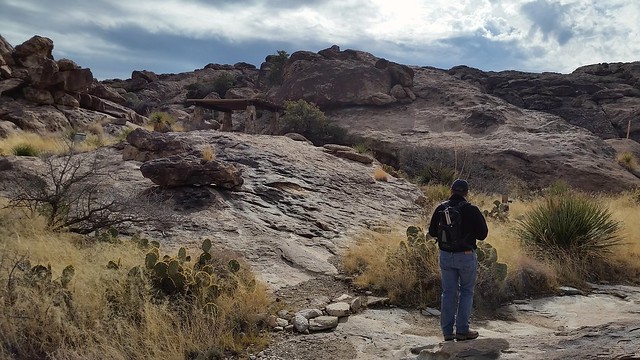 First you climb the ridge behind the picnic shelter 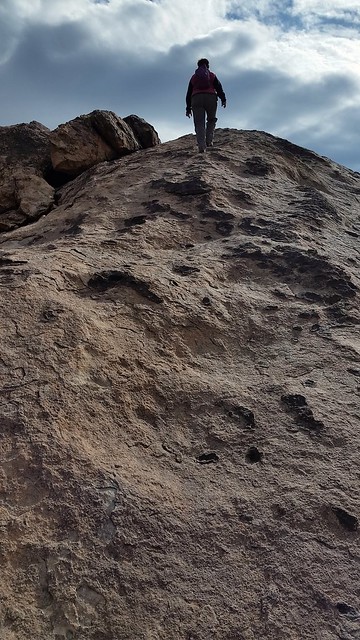 Up the ridge we go

After climbing the ridge we were instructed to find the rock formation that resembles a duck.  From there look to the right and find the rocks that look like an alligator. 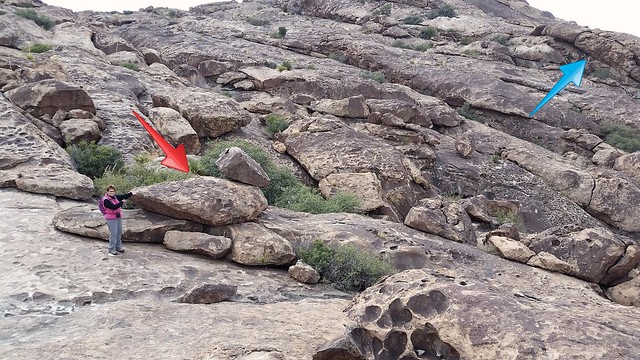 Climbing straight up from the head of the gator we found the cave entrance under a huge boulder. 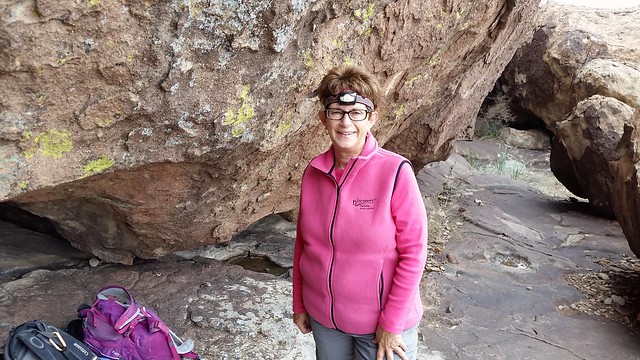 A veteran spelunker prepares to enter the cave 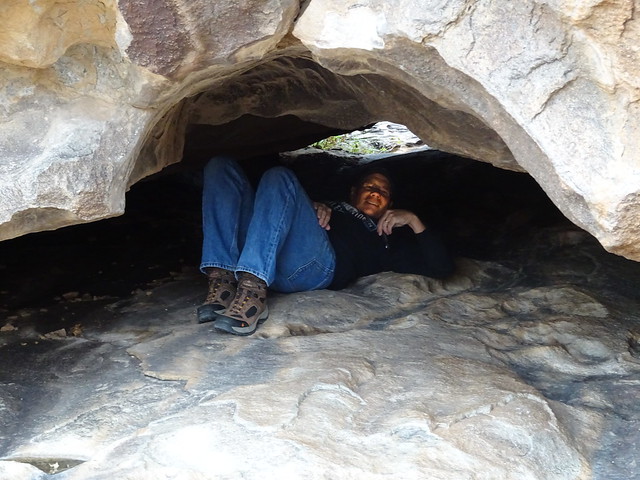 It’s a bit tight at first 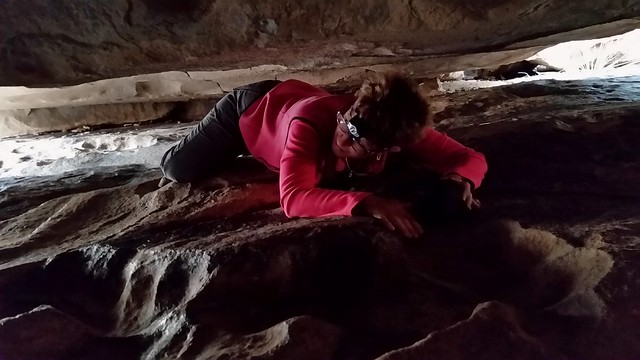 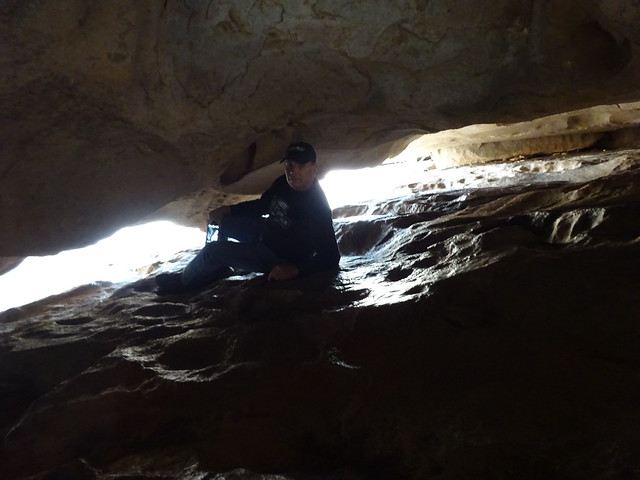 The rocks are slippery from all the traffic over the years

Once inside there was enough headroom to sit up and, in some spots, stand.  The rock art was on the walls right in front of us.  There were seven faces or “masks” to find.  We found all seven! 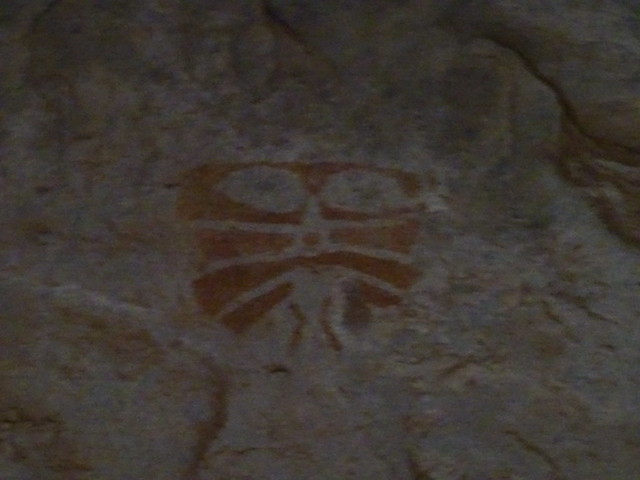 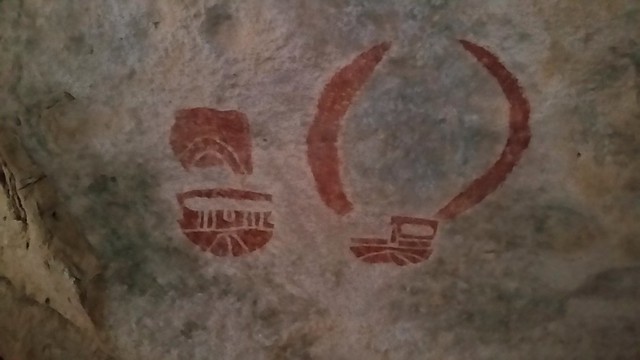 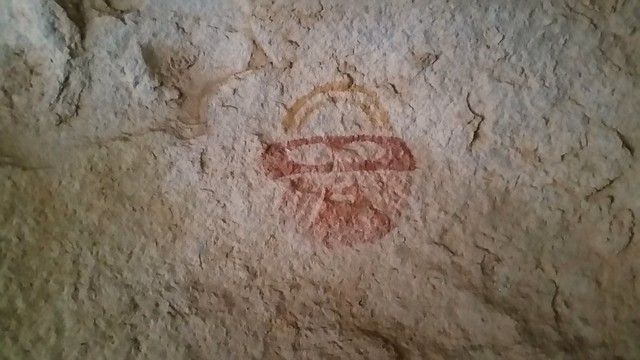 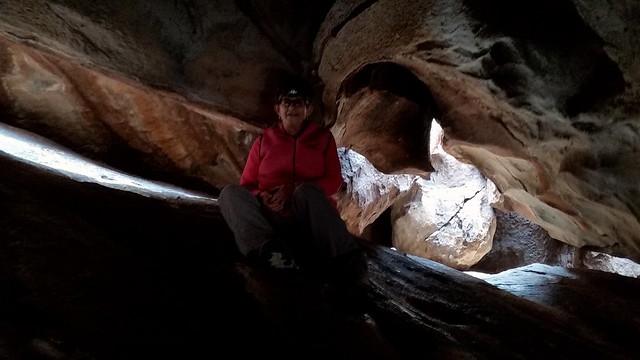 A young spelunker at rest 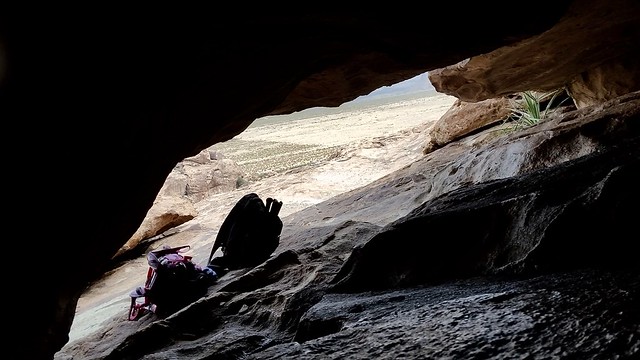 Backpacks at the entrance

We climbed out of the cave and made our way up the rocks to get a better view of the surrounding area. 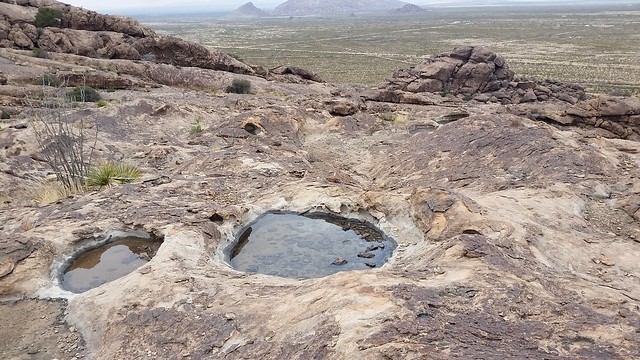 Examples of the tanks that name the park

We were leaving the park the next day but, since check-out isn’t until two in the afternoon, we used the morning to take another short hike up into the rocks using the Chain Trail. 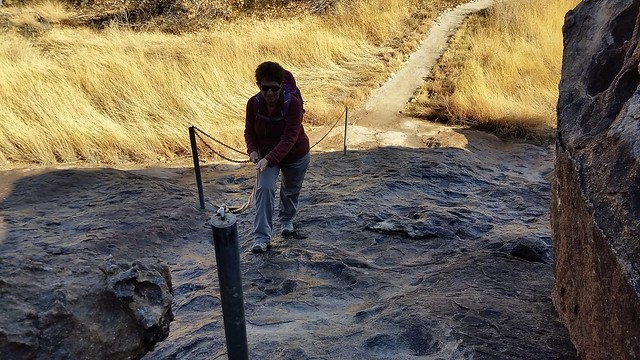 This area is very popular for bouldering, an activity where you just use your fingers and toes to scale the sides of large boulders.  You can identify these people heading out into the rocks as they carry what appears to be a doubled over mattress on their backs.  We sat for a while watching two groups to see them climb, but it is our observation that this sport involves a great deal of standing around talking.  Finally one young lady laid down on her mat, reached up to the boulder, pulled herself up, and quickly made her way to the top.  She was pretty impressive! 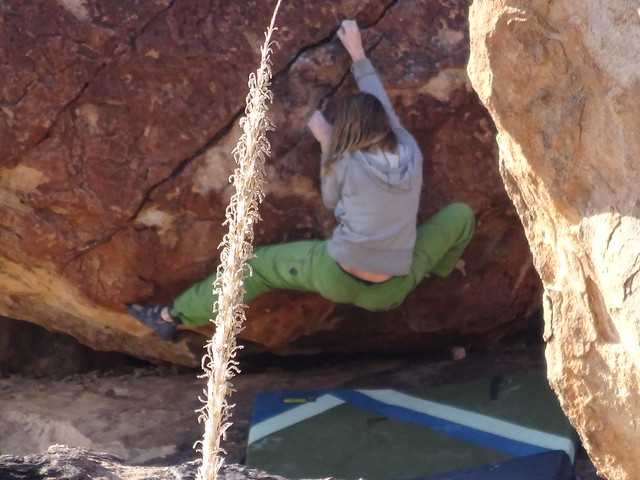 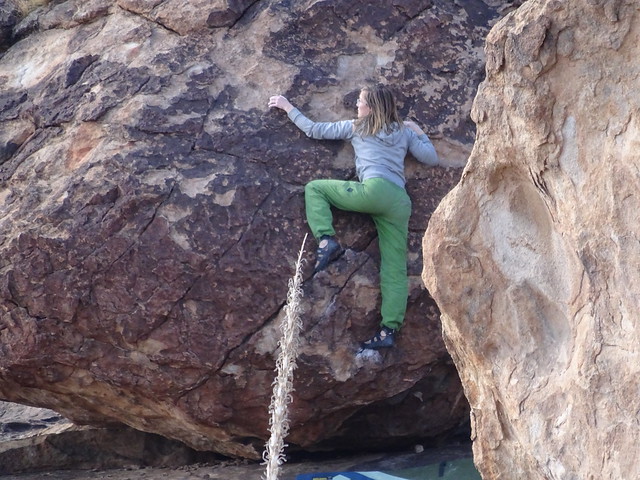 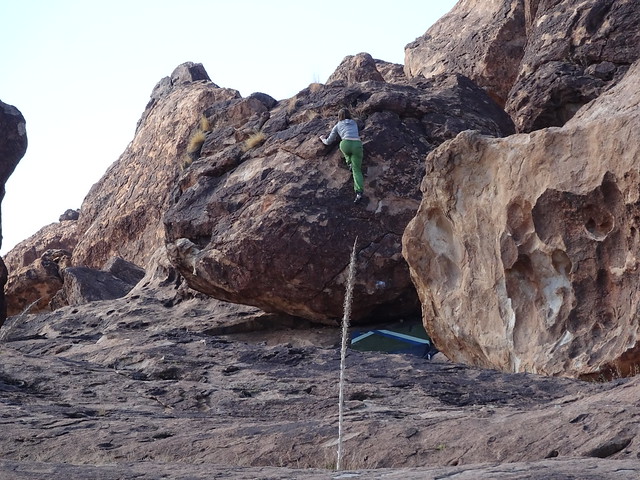 We spent some time looking for another small cave that had some artwork.  We had trouble locating the cave at first but spotted the entrance when we heard a group on a ranger led hike talking inside it.  Once they left we made our way inside.  One area had an inscription made by a local named Santiago Cooper in the late 1800s. 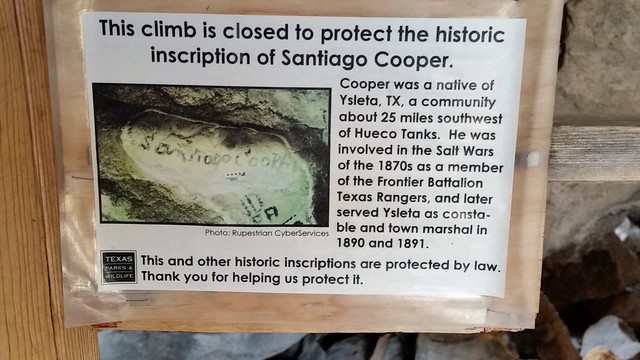 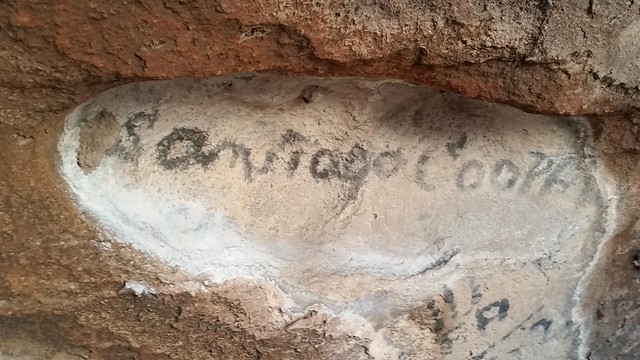 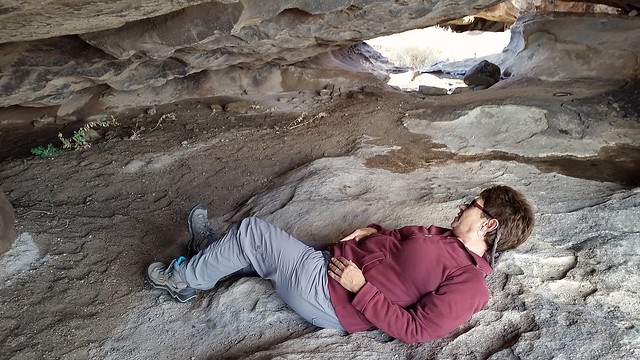 Getting a view of some artwork 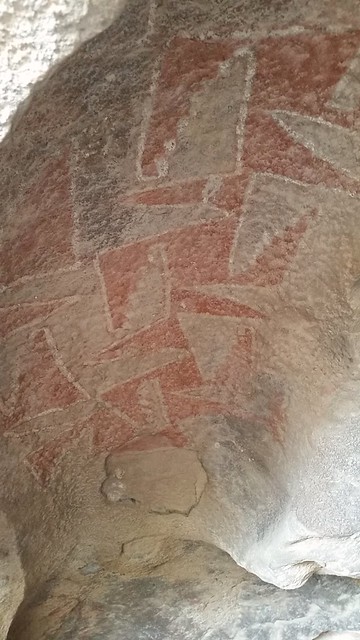 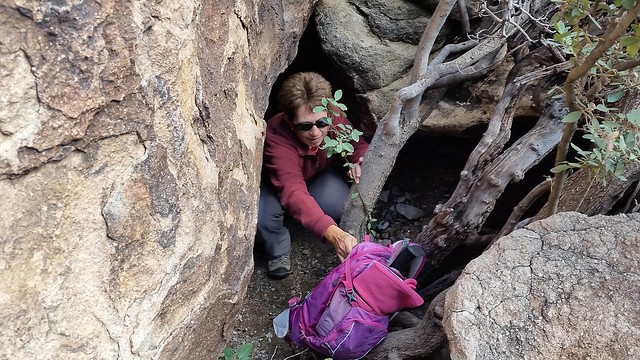 Getting in and out was a bit of a challenge

Once out of the cave we made our way back to the motorhome, packed up a few things, and headed down the road.  We really enjoyed our brief stay in Hueco Tanks.  We only hiked the North Mountain section of the rocks, as that is the only place open to self-guided hiking.  If you are really interested in rock art, climbing/bouldering, or birding, you can participate in some ranger-led hikes in the West Mountain and East Mountain sections.