A Quiet Stay Near Iowa City

Posted on August 9, 2016 by placestheygo

When we arrived at Sugar Bottom Recreation Area, a Corp of Engineers park just north of Iowa City, we had a reservation for four days.  About 60% of the sites here are reservable with the rest available on a first come first served basis.  The site we reserved turned out to be a bit unlevel, and we were fortunate that one full hook-up walk-up site was empty upon our arrival.  With a very nice site and nothing on our schedule for the near future, we ended up extending our stay here to the full 14 days allowed.  While central Iowa is not exactly in the list of the top ten places to visit, we did find a few things to keep us busy.

Nearby Iowa City is home to the University of Iowa, and the school dominates the city.  The campus is integrated into the center of the city so it doesn’t seem to have that same campus appeal we have found in other schools.  Some people obviously enjoy the urban setting of schools like this, but we prefer a campus away from the city.  One afternoon on a visit to a nice farmers market in downtown Iowa City, we walked a few blocks to the west to visit the Old Capitol Museum.  It was once the main government building for the state of Iowa, and it now stands as the most prominent landmark at the center of the university campus. 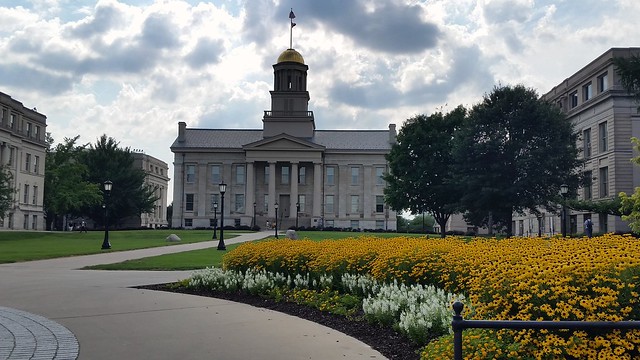 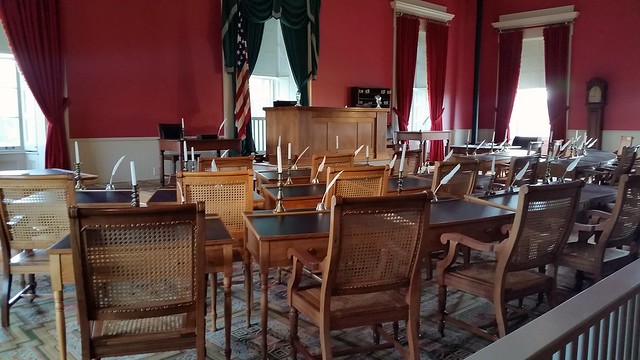 After ten years of housing the government in Iowa City, the state decided to move the capital to Des Moines, a city located more toward the center of the state. When the state government moved in 1857, the Old Capitol Building became the first permanent building owned by the University of Iowa. 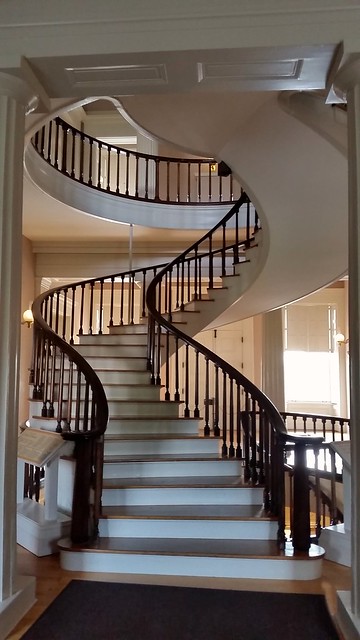 Beautiful staircase leading to balconies for the legislative rooms

The city of Cedar Rapids is located about 20 miles north of our park.  One afternoon we drove up for a visit.  While it is the hometown of PGA golfer Zach Johnson and NFL MVP Kurt Warner, Cedar Rapids’ best known figure may be artist Grant Wood.  You may not recognize the name but you’re probably familiar with one of his most famous works.

This year is Wood’s 125th birthday and, in recognition, 25 fiberglass statues of the couple in the famous painting have been decorated by local artists and placed at various locations throughout the city. 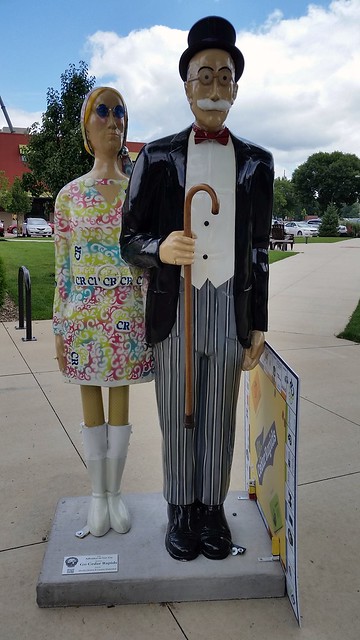 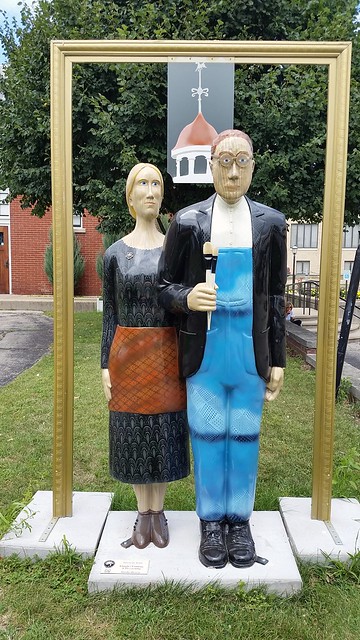 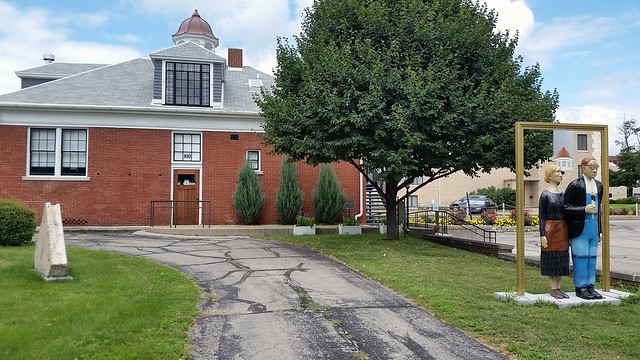 Wood’s studio on 2nd Ave. (closed the day of our visit) 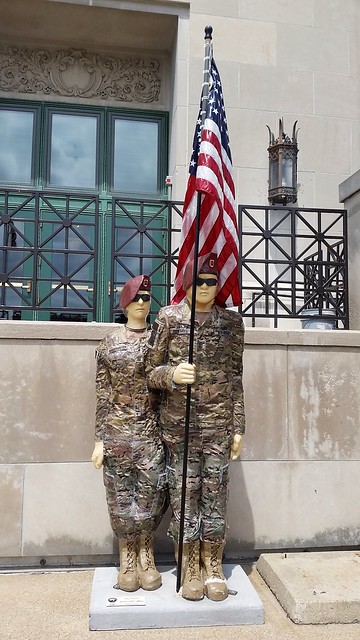 The “Mike and Rosie” statue sits at the entrance to Veterans Memorial Building, located on May’s Island in the middle of the Cedar River. 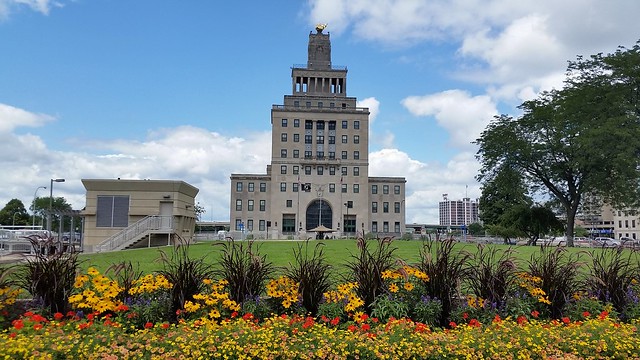 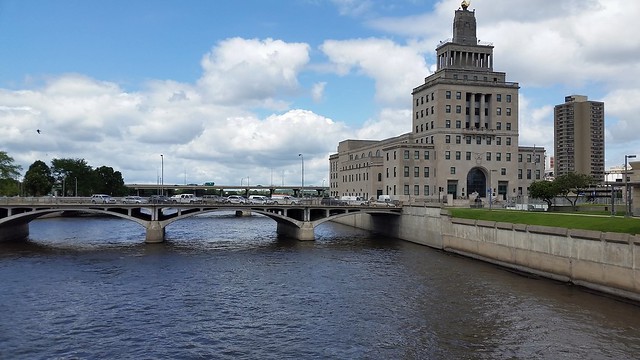 The Cedar River on one side of the island

The building sustained considerable damage, as did other buildings along the river, in flooding that occurred in 2008. 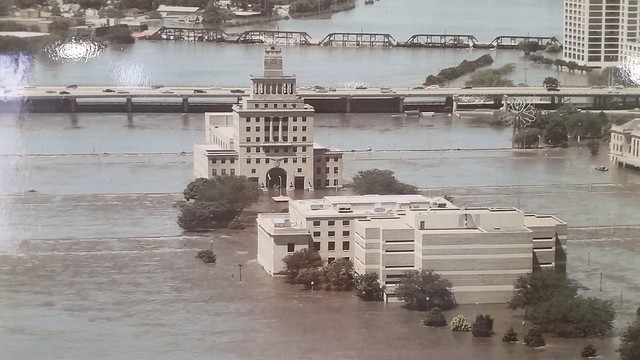 Our main reason for visiting the Veteran’s Memorial Building was to see the large stained glass window designed by Grant Wood.  The window measures 24 by 20 feet.  It depicts a 16 foot Lady of Peace and Victory in the clouds.  She wears a Grecian robe and a blue mourning veil and holds a palm branch for peace in one hand and a wreath for victory in the other.  The artist’s sister, Nan, was the model for the Lady of Peace and Victory.  Across the bottom are six 6 feet tall soldiers representing the American Revolution, War of 1812, Mexican–American War, American Civil War, Spanish–American War, and World War I. 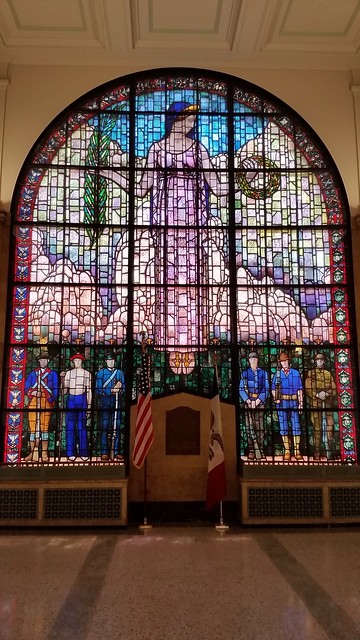 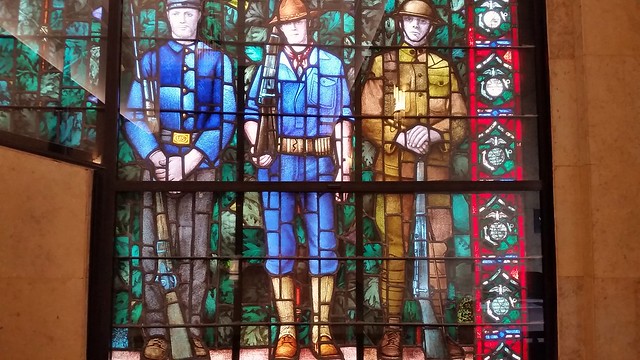 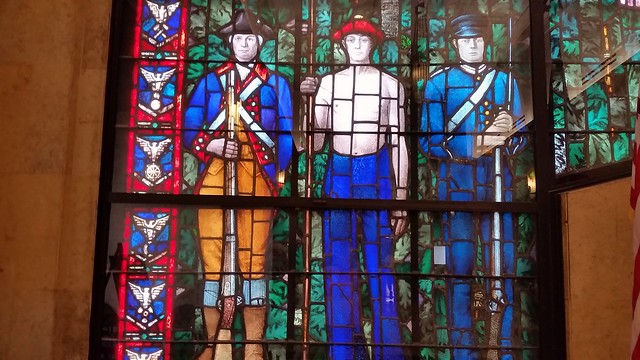 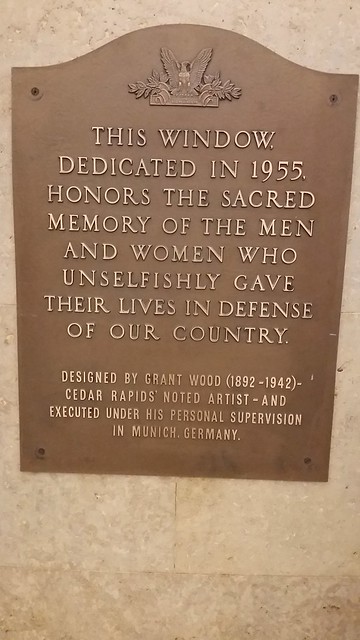 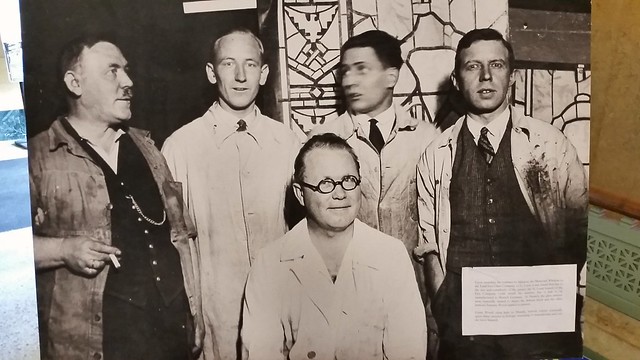 Grant Wood (seated) supervising the construction of the glass in Germany

The humidity levels have been brutal during our time in this area so outdoor activities have been limited.  One slightly cooler afternoon we did complete a short hike on the Cedar Valley Nature Trail, located within the Sugar Bottom Recreation Area. 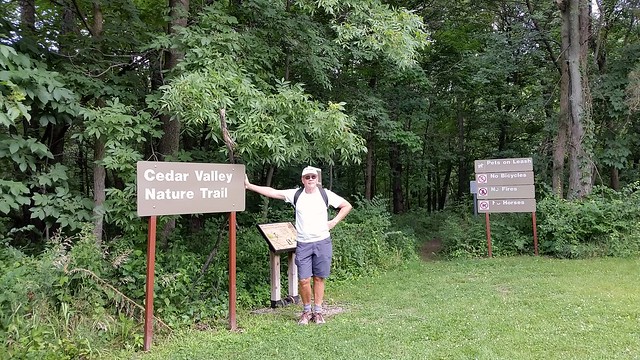 Although only about three and a half miles out and back, the trail has some decent “up and down” sections that provide a good workout. 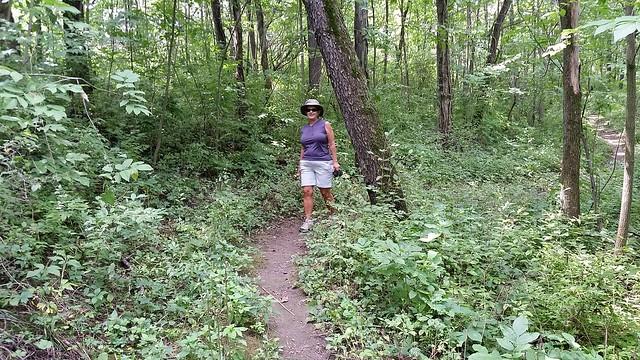 The trail passes by an cave, a home to some Native Americans from as long ago as 10,000 years.  The entrance is blocked off as it is used by the University of Iowa Archaeological Field School. 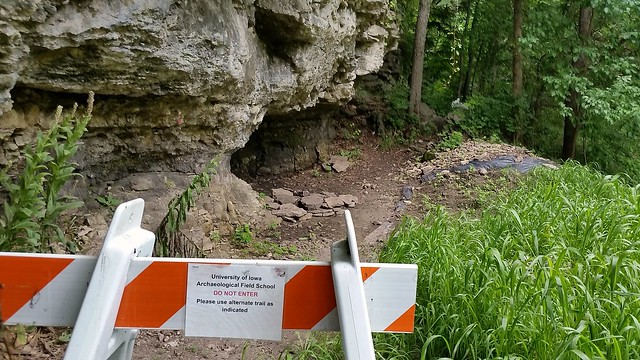 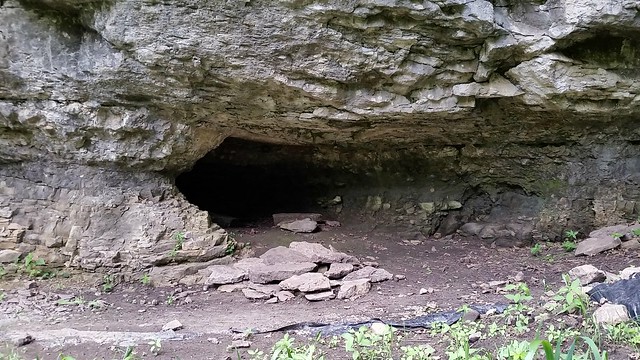 The next day we drove to the other side of the reservoir to hike the Square Point/Woodpecker Trails. 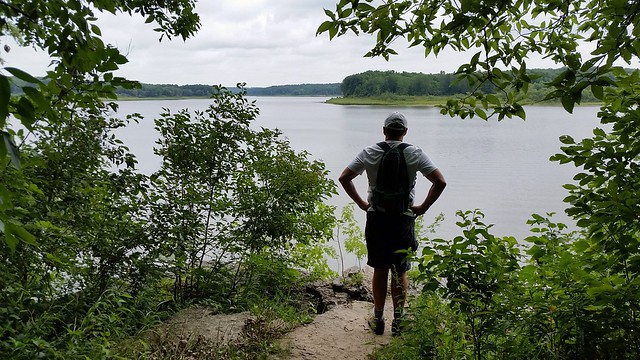 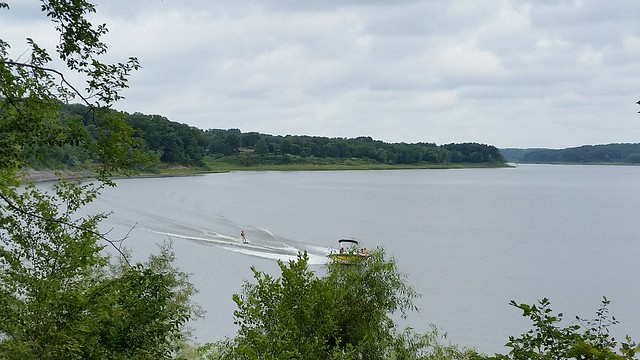 By connecting the two trails we were able to complete a hike of just under four miles. 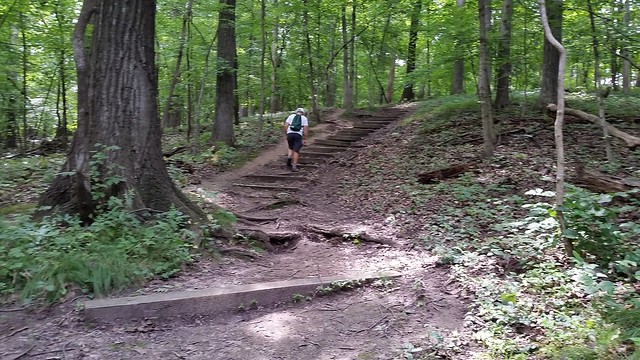 Just a mile or so from the Square Point/Woodpecker trails is the Coralville Dam, an earthen dam built to control flooding on the Iowa River. Sitting on the west side of the dam is the Devonian Fossil Gorge.

During a flood in 1993 water roared over a large spillway on the west side of the dam.  For 28 days as much as 17,000 cubic feet of water-per-second flowed down the spillway, obliterating the road and a campground.  Fifteen feet of river-bottom silt and sand were rapidly eroded and washed away, exposing the limestone below. Up to five feet of limestone was then eroded near the end of the spillway and stone slabs weighing as much as two or three tons were carried hundreds of feet downstream.  When the flood abated, the eroded gorge surface exposed a rich collection of Devonian-age fossils from when Iowa was covered by warm, shallow seas 375 million years ago.  Naming the area the Devonian Fossil Gorge, the Corp of Engineers built a small visitor center next to the site with a concrete walk leading down to the fossil bed.

In 2008 another flood caused the river to go over the spillway again, significantly widening the gorge and exposing more of the fossils.  Below is a photo taken during that flood showing water cascading through the fossil gorge. 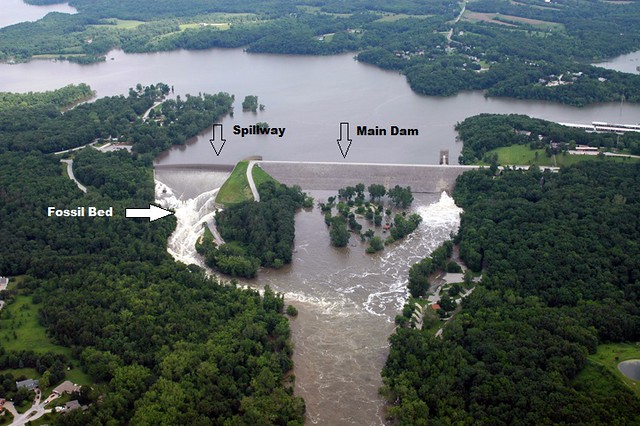 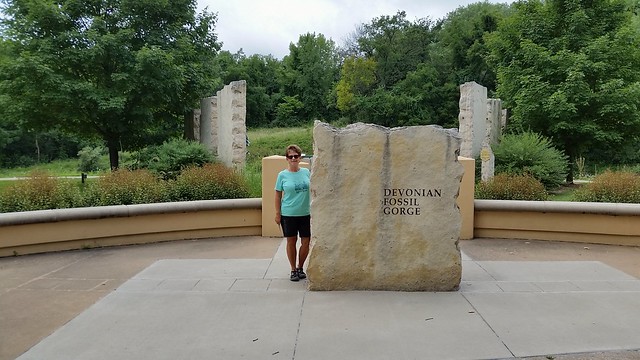 A young archaeologist in the center of the visitor area 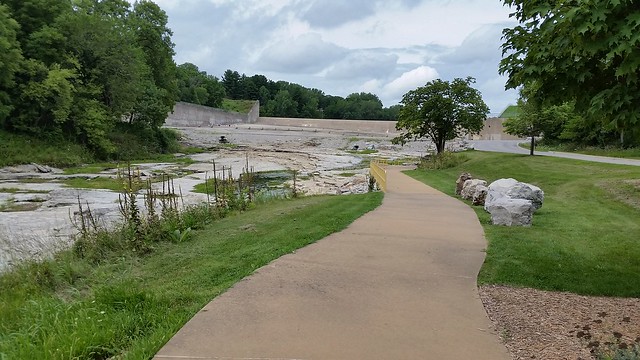 Sidewalk into the gorge (the spillway is visible in the background) 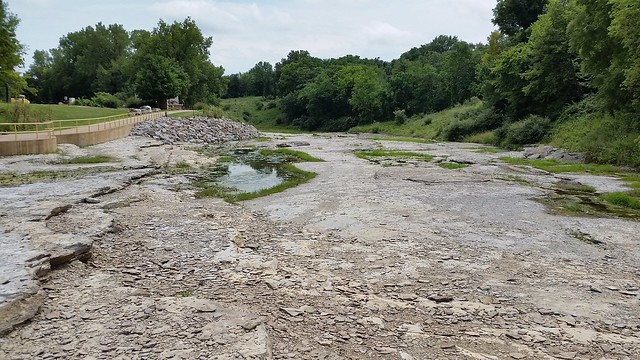 Looking down the gorge (the spillway is behind us)

As you go down the gorge you have to look carefully to spot the fossils embedded in the rock.  Once you spot one, the others around it become more apparent. 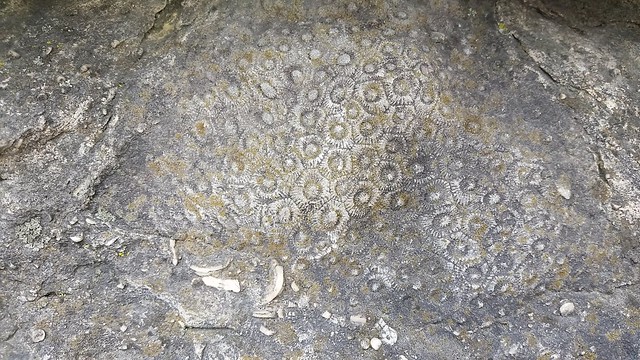 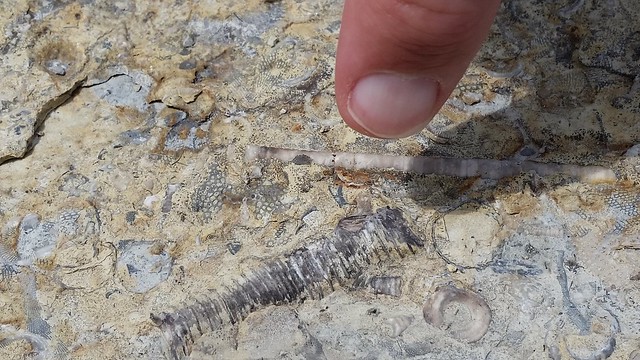 Stem of a Crinoid (Sea Lily) 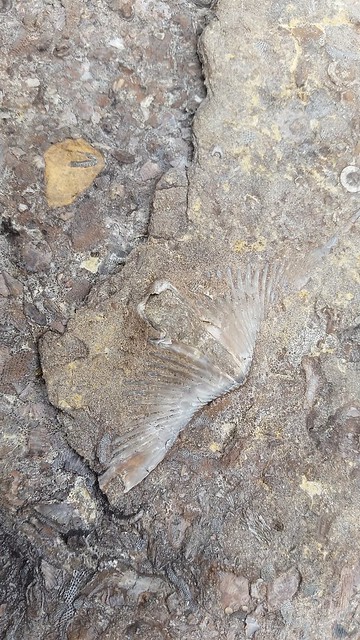 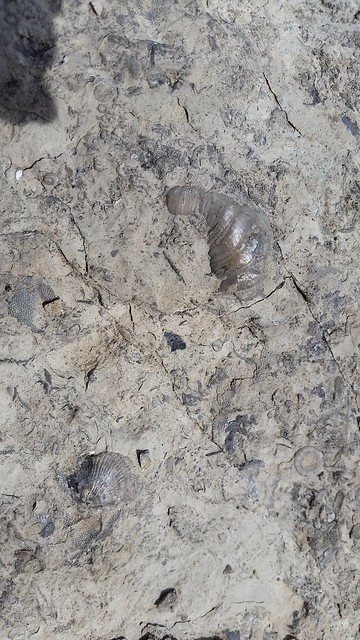 That ends what was planned as a brief (four day) stop that became a wonderful, long (14 day) stay near Iowa City.  Next up is a week along the Mississippi just south of Davenport, IA.  More on that later . . .

45 Responses to A Quiet Stay Near Iowa City