Along the Mississippi – Davenport and Muscatine, IA

After leaving the Iowa City area we had a short drive of about 60 miles to our next stop at Shady Creek Recreation Area, a small Corps of Engineer park along the Mississippi River between Davenport and Muscatine, IA.  The park is typical of COE campgrounds with nice paved sites.  While some COE parks have full hook-ups, Shady Creek only has electric, so we arrived for a one week stay with a full tank of fresh water and empty waste tanks. 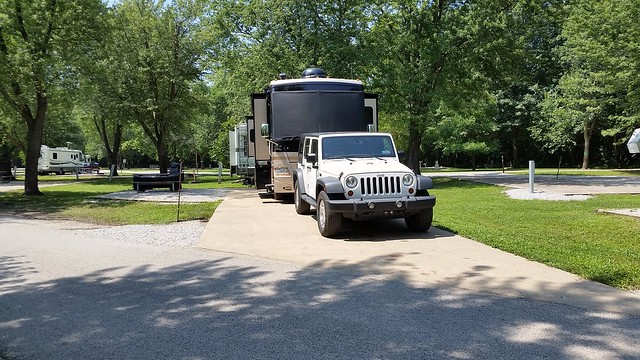 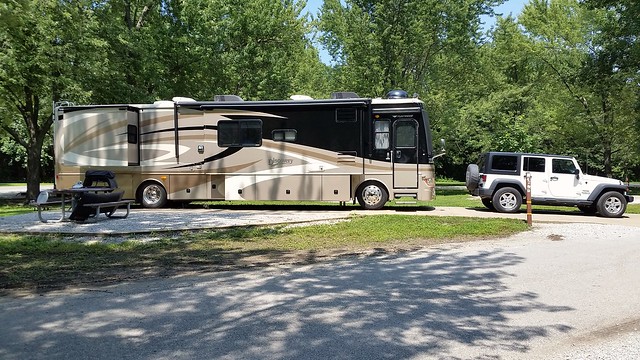 For the past few years Pam has been following a former York Township Elementary School (where she taught for “a few” years) third grade student, Brendon Sanger, as he played college baseball at Florida Atlantic University.  Last year Brendon was drafted by the LA Angels and this year is playing for the Burlington (IA) Bees, a Class A team in the Midwest League.  Davenport also has a team in the Midwest League, the Quad City River Bandits, and we were pleased to see that the Bees would be playing in Davenport during our stay.  Pam is friends with Brendon’s mother on Facebook and let her know of our plans to attend a game.  Brendon was happy to have someone from home attend one of his games and left free tickets for us at the stadium.  OK, so the night we were there was half price night making a ticket $3, but we still saved $6.  And we still had to pay for parking ($2)! 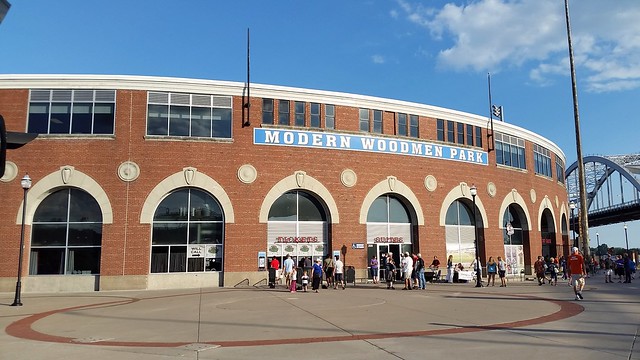 Modern Woodmen Park is a nice little ballpark right along the Mississippi next to downtown Davenport.  Modern Woodman is an insurance and investment firm located across the river in Rock Island, IL.  We were there on a Monday night and the crowd was a bit small so we were able to get great seats a few rows behind the visitors dugout.  Since he had not seen Pam since third grade we weren’t sure if Brendon would recognize us, but when he turned around to return to the dugout after the national anthem he recognized the two young fans waving to him and came up to say hello.  While he didn’t have much time right then he said he would come up in the stands to talk after the game. 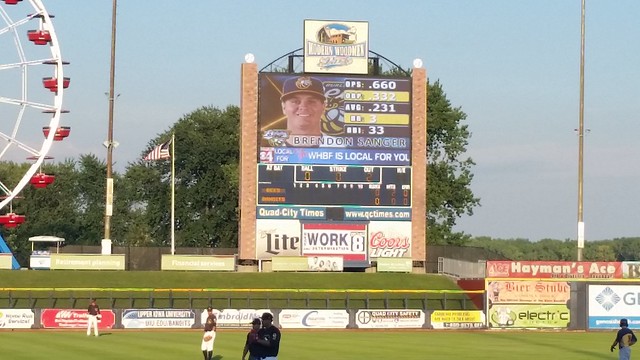 Although he usually plays second base, for this game Brendon was the designated hitter.  He had two hits in the game and scored a run. 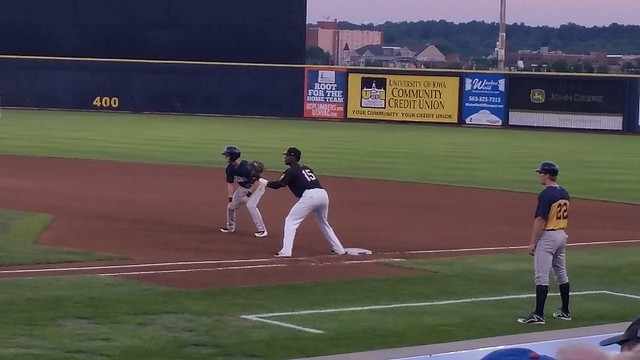 On first base after a solid single 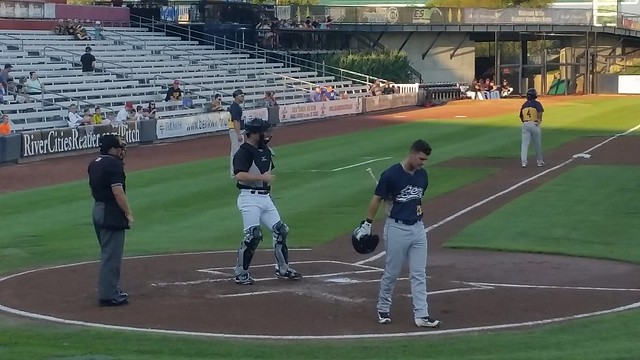 Oops, not so good on this one

Now we certainly do enjoy a baseball game, and both teams played very well.  But nine innings is enough, especially when you have no interest in or experience with either team.  So we were a bit dismayed when the score was tied at the end of the ninth, and the tenth, and the eleventh, and the . . . you get the idea.  By the time the game ended (in the fifteenth inning with the Bees winning) we were sitting in an almost empty stadium!  We would have left hours earlier but told Brendon we would talk with him at the end of the game (who knew?).  But it was worth the wait as we had a nice talk before he had to get to the bus for the return trip back to Burlington (75 miles away).  No hotels in the minor leagues!

Our son, Kevin, is a pilot for ExpressJet, a regional airline flying as Delta Connect, and Davenport is one of the cities they service.  When he found we would be in the area, he was able to fly a route that put him in Davenport overnight and most of the day on Wednesday and Thursday (he flew to Atlanta and back Wednesday night).  So we drove to Davenport both days, picked him up at a downtown hotel, and spent the day together (oops, we forgot to get a photo).

Later in the week we drove down the river about 10 miles from the park to visit the “Pearl Button Capital of the World.”  That, as everyone knows, would be the city of Muscatine, IA.  To find out what it means to be the Pearl Button Capital, we made a visit to the Muscatine History and Industry Center. 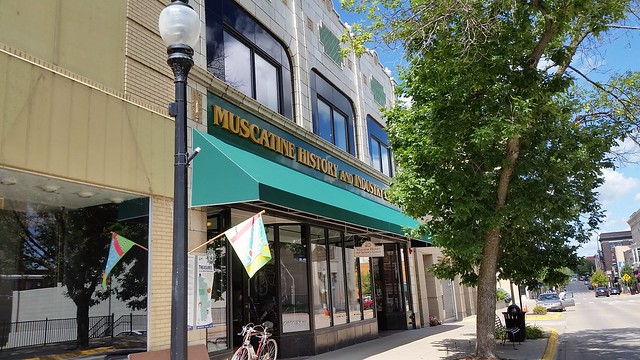 We became curious about the button industry here when we spotted a statue called “Mississippi Harvest” in a park along the river.  The statue is man standing in a small boat holding a pair of large tongs with mussels at his feet. 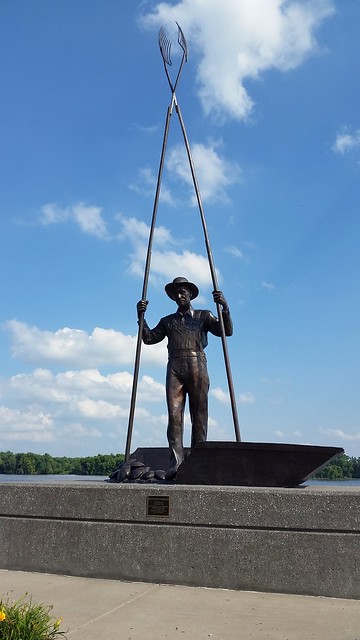 A picture that inspired the statue was on display in the center. 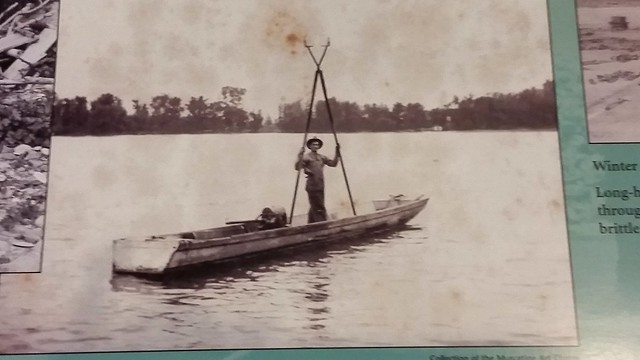 So why is the town called the “Pearl Button Capital?”  In 1884 J.F. Boepple, a German immigrant, began producing buttons that looked like pearls by machine-punching them out of freshwater mussel shells harvested from the Mississippi River.  Muscatine’s slogan, “Pearl of the Mississippi,” refers to the days when pearl button manufacturing by the McKee Button Company was a significant economic contributor.  In 1915, Weber & Sons Button Co., Inc. was the world’s largest producer of fancy freshwater pearl buttons.  From that time forward, Muscatine was known as “The Pearl Button Capital of the World”. 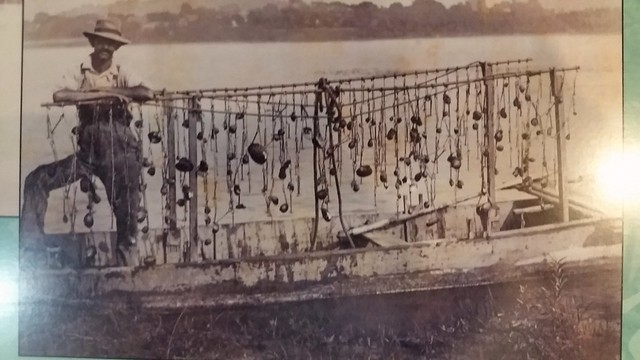 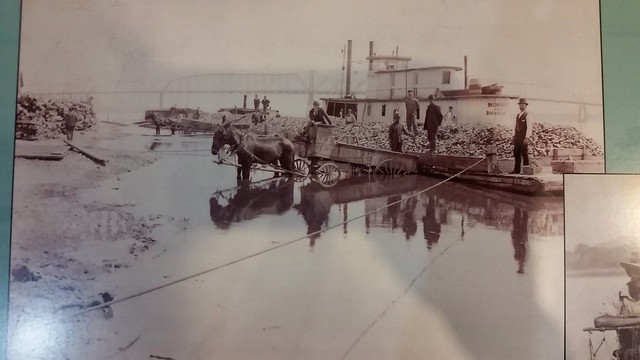 Unloading mussels on the river bank

Shell cutters operated lathes with tubular saws made of hardened steel and used tongs to hold the shell in place. Jets of water sprayed on the saw during cutting to keep it cool and to control dust. The cutter produced blanks or circular pieces of shell with one rough side and one smooth side. 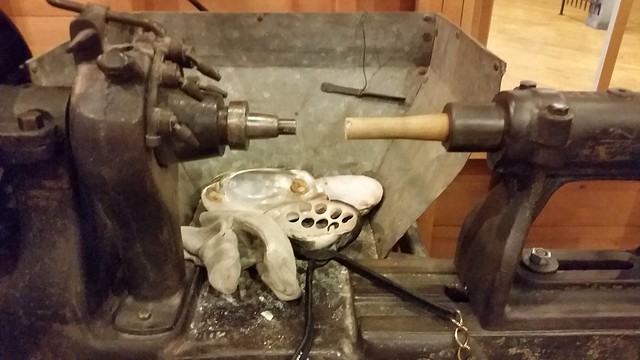 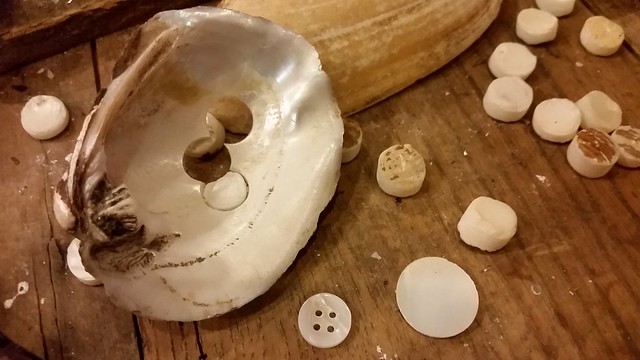 Shell, blanks, and a button 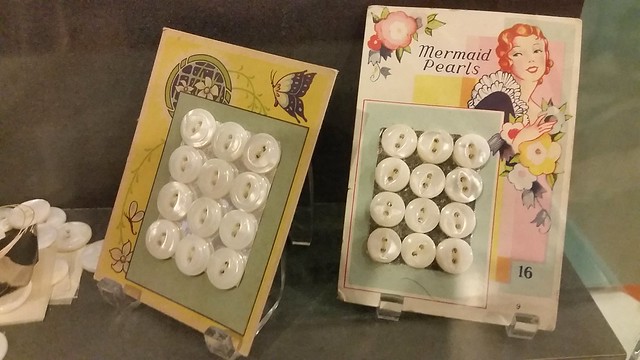 The second floor of the center is dedicated to displays highlighting eight current industries that are in Muscatine.  One company that is familiar to us is HON,  a company that is a leader in the production of school and office furniture.  Most of us sat in desks manufactured in Muscatine as we went through our school years. 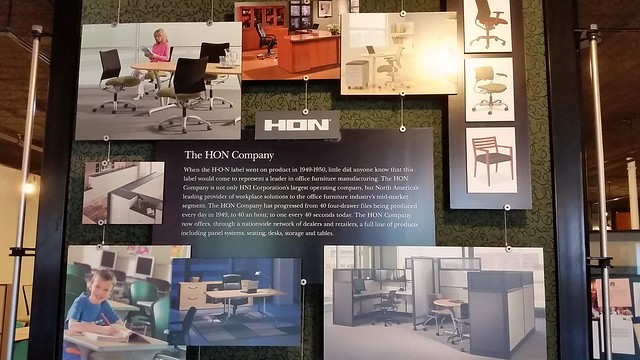 Not far from the Shady Creek Recreation Area is the Pine Creek Gristmill.  The mill essentially appears as it has since the 1920s and is a virtual museum of the range of milling processes that were used between 1848 and 1929. 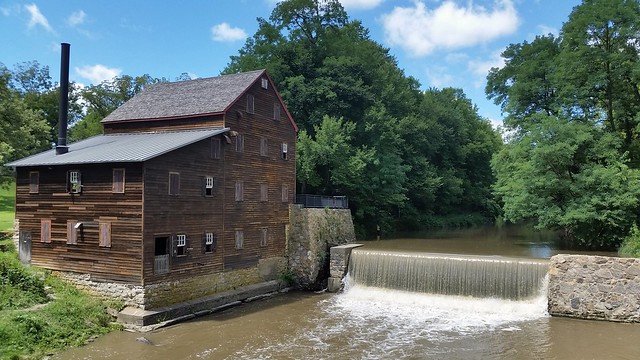 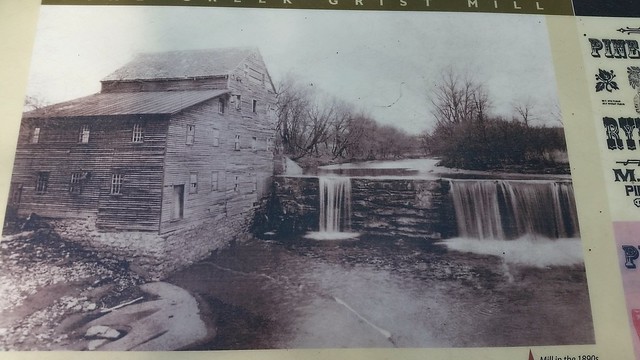 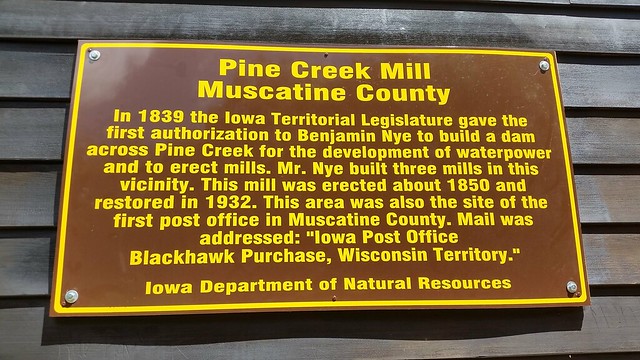 A non-profit organization has restored the original building to operational status.  It was quite impressive to stand inside when the machinery was in operation.  Belts driven by a steam engine in the basement were moving in all directions on three floors powering machines and lifts moving grain through the milling process. 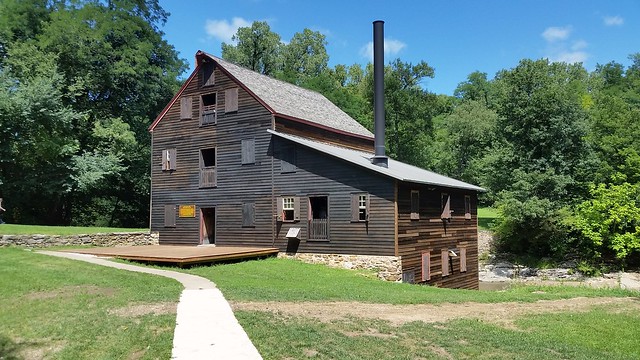 The Mississippi River is known for its high volume of barge traffic.  We spent one afternoon along the river watching a few of the large barges move up and down the river in front of us.  First we stopped at one of the numerous locks that are located along the river. 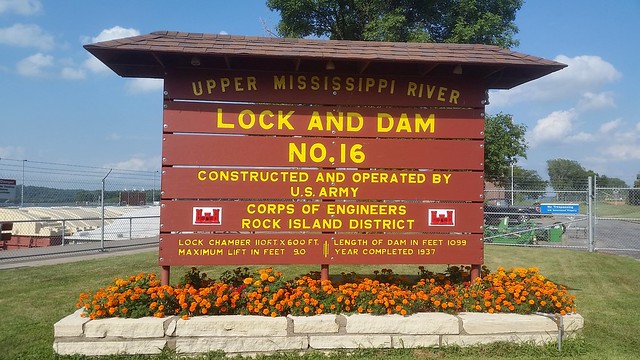 A tug pushing 15 barges was slowly making its way through the lock.  It is so long that it has to push the first half of the barges into the lock, disconnect them, and pull back with the other half.  The first barges are lifted and pulled out of the lock, then the tug pushes the remaining ones in and they are lifted.  Then they move forward and reconnect before moving on.  It is a slow, methodical process that they repeat at each of the numerous locks. 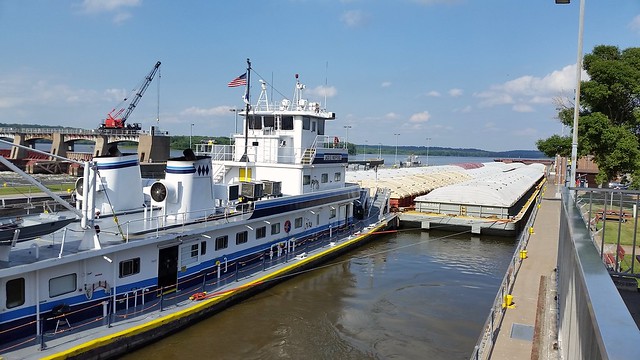 We then moved down to Riverside Park in Muscatine, set up our bag chairs, and enjoyed some quiet time watching the barge traffic while enjoying our favorite beverages. 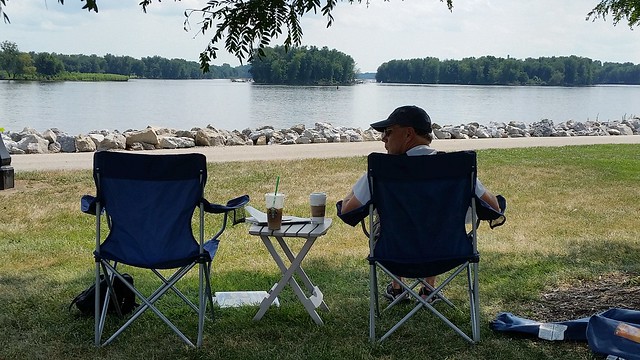 While we watched, two large 15 barge vessels passed each other right in front of us. 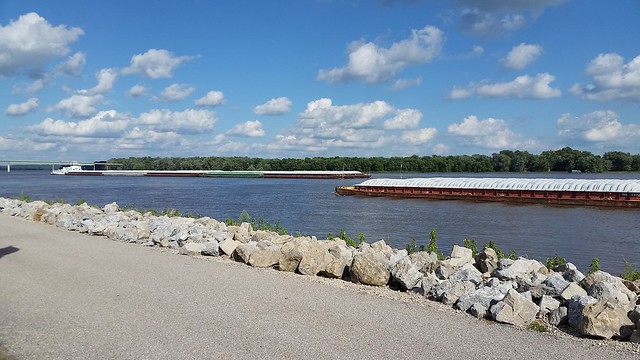 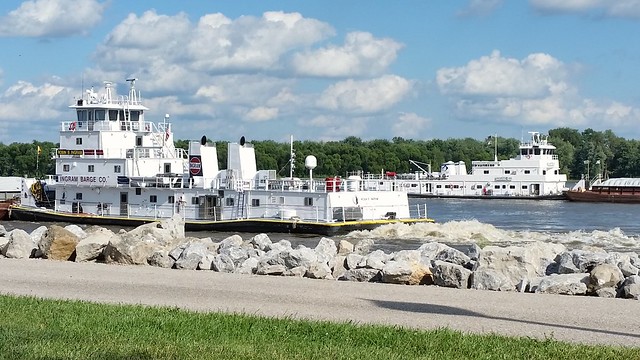 Look at the wake behind each boat in the photo below.  Can you tell which one is going upstream and which is headed downstream? 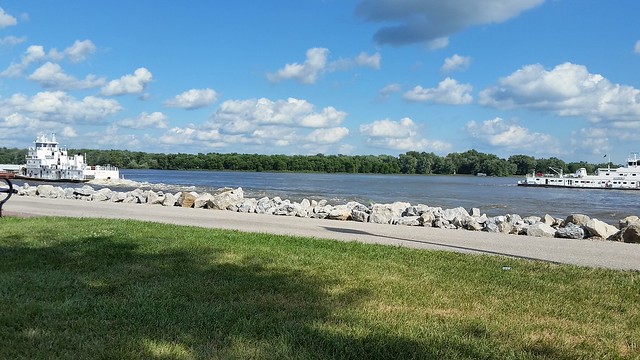 That concludes a fairly interesting visit along the Mississippi River.  Next up is a four day stop in Champaign, IL as we continue moving east.  More on that later . . .

12 Responses to Along the Mississippi – Davenport and Muscatine, IA