We’ve made our way south into central Iowa where we are staying at a nice COE (Army Corp of Engineer) park called Sugar Bottom Recreation Area.  Fellow bloggers John and Sharon (On the Road of Retirement) stayed here in June and recommended it.  The park is along the Iowa River just north of the Coralville Dam. 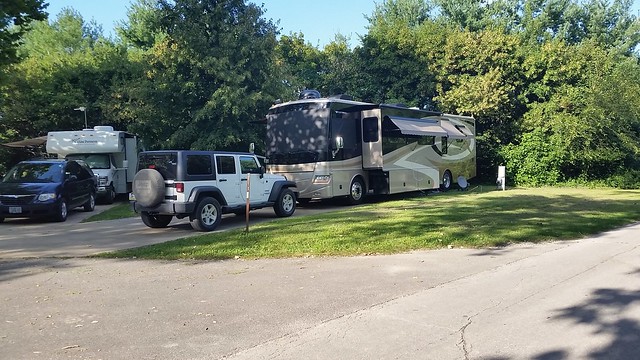 Sugar Bottom is the largest of a number of nice campgrounds surrounding the reservoir created by the Coralville Dam.  Most sites are water/electric but there are also a few full hook-up sites.  Sixty percent of the sites are reservable on-line while the rest are first come first served.  We had a reservation for a gravel, water/electric site but found that one paved full hook-up site was available when we arrived, so we were able to take it.  The site appears a bit small in the pictures but with the “V” layout we have good privacy from our only neighbor and a wide lawn between us and the road. 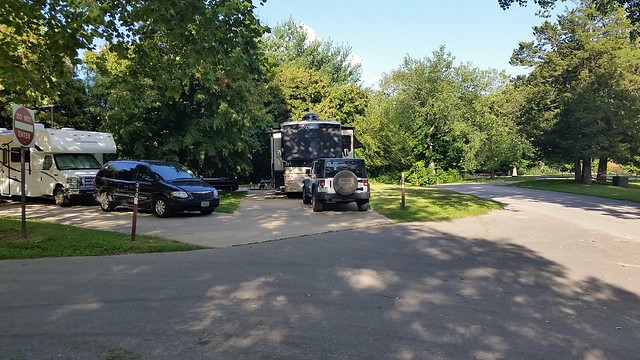 The Amana Colonies are located about 20 miles to our west, so one day we drove over for a visit.  Like many who have heard of the colonies but never knew much about them, we thought it was an Amish settlement, similar to those found in Lancaster County near our former home in Pennsylvania.  It turns out the only similarity that the people of Amana had with the Amish is that they were of German descent and very religious.

The Amana Colony is seven villages on 26,000 acres.    The villages are named Amana (or Main Amana), East Amana, High Amana, Middle Amana, South Amana, West Amana, and Homestead. The villages were built and settled by German Pietists, who were persecuted in their homeland by the German state government and the Lutheran Church.  Calling themselves the Community of True Inspiration, they first settled in New York near Buffalo in what is now the Town of West Seneca.  However, seeking more isolated surroundings, they moved to Iowa in 1856. They lived a communal life there until the mid-1930s.

Our first stop was at a small visitor center in Amana where we purchased tickets that gave us entry into various spots in the colonies.  We then moved just down the street to visit the Amana Heritage Center and Museum. 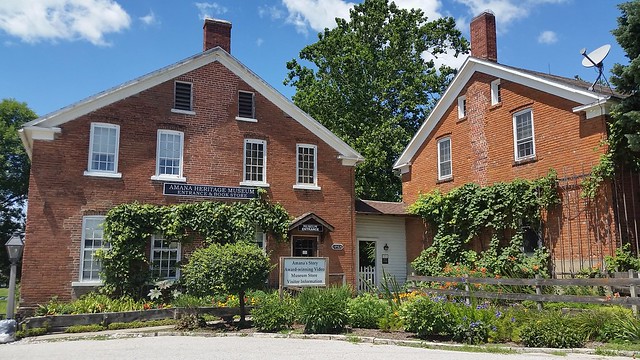 Entrance to the Amana Heritage Museum 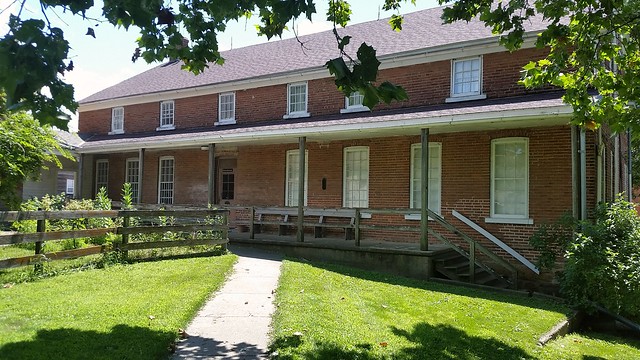 Side view of the museum located in the former schoolhouse

The museum is located in two adjacent buildings.  The entrance is in the village’s former schoolhouse.  It contains a room filled with old photos and displays as well as a small theater where we viewed a brief but informative video on the history of the colonies.  Following the video we were instructed to cross a small yard and enter the main part of the museum located in a former family residence called the Noé House.  The Noé House, built in 1864 of locally produced brick, was originally a communal kitchen and later a doctor’s residence (Dr. Noé). 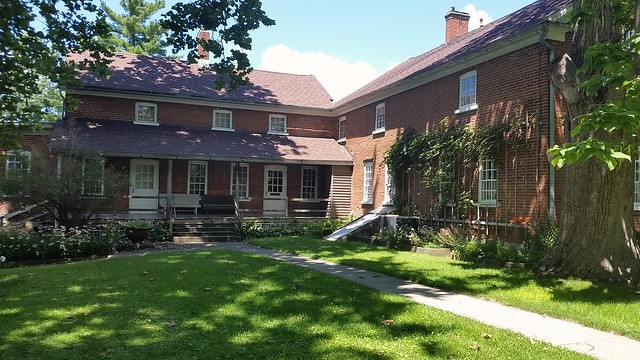 The various rooms in the house were filled with memorabilia and old photos depicting life in the commune. 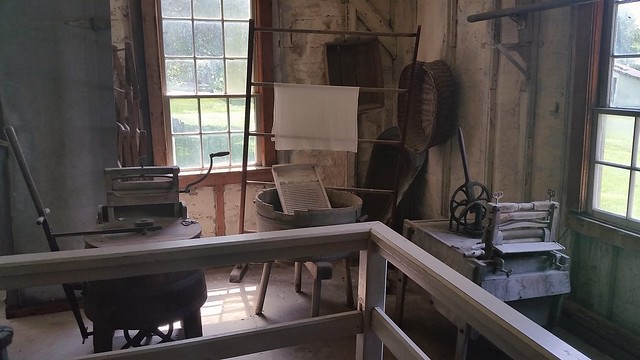 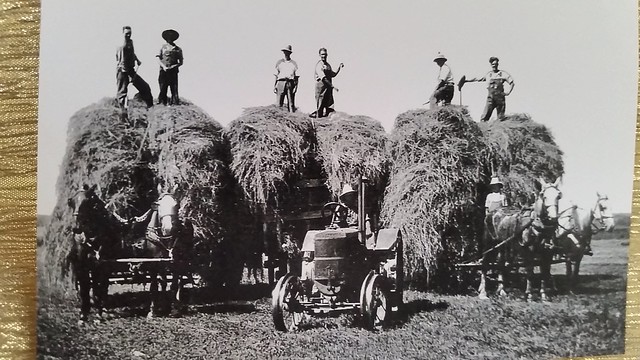 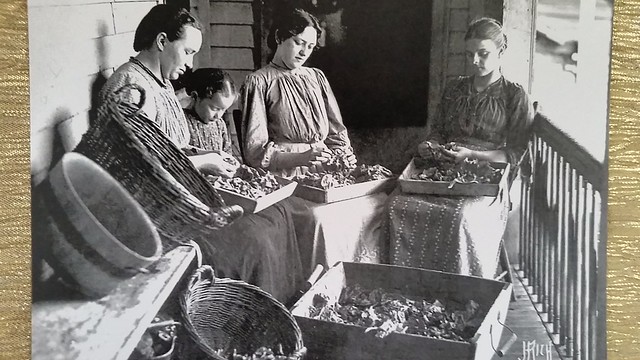 A note on a bulletin board outside the museum that said Lily Lake was in full bloom.  We didn’t know what that meant until we drove by the lake a few minutes later.  We discovered that the lake is covered with lily pads in full bloom! 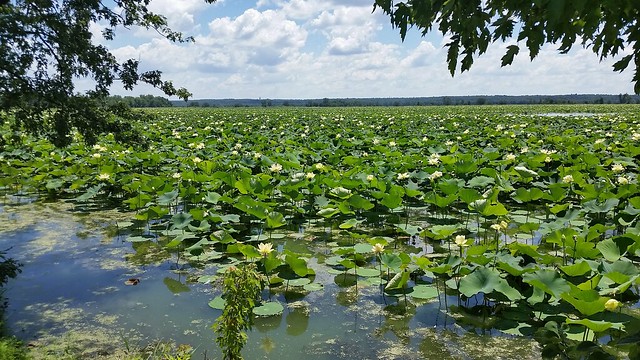 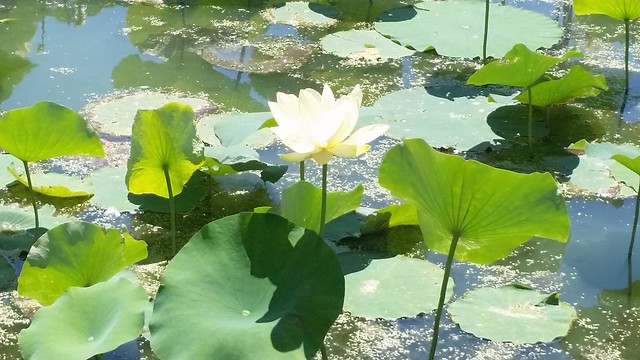 We drove just a few miles west to Middle Amana where we visited a communal kitchen.  There was no cooking in the homes of Amana citizens.  Instead, people originally ate together in groups of thirty to forty-five.  Communal kitchens, each with their own gardens, hosted meals.  Men would sit at one table while women and small children would sit at another. Prayers were said in German before and after meals.  Meals were not considered social affairs so conversation was discouraged and diners were expected to eat in 15 minutes (no time to waste, there was work to be done!). 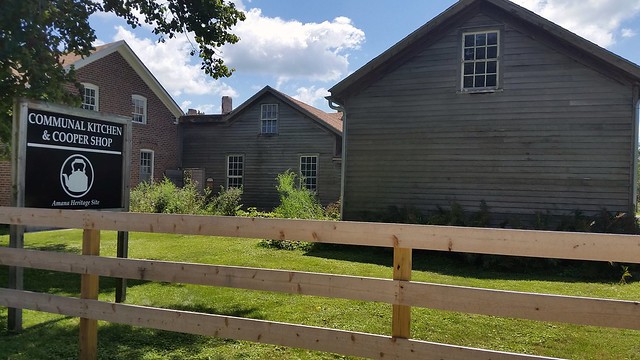 There were as many as fifty-five communal kitchens in the Colonies: sixteen in Amana, ten in Middle Amana, nine in Homestead, six in South and West Amana, and four in East and High Amana. 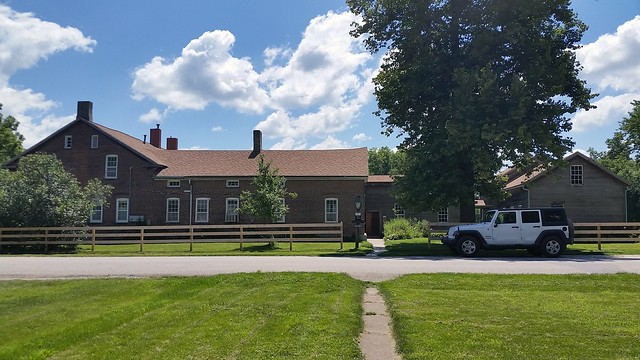 View from across the street 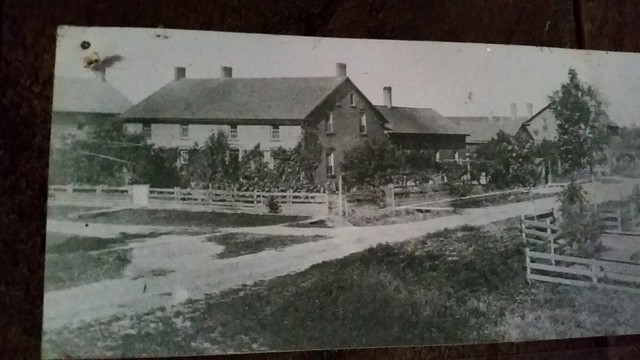 Old photo of the communal kitchen 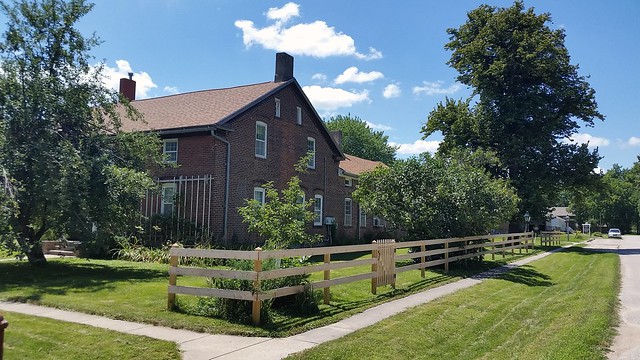 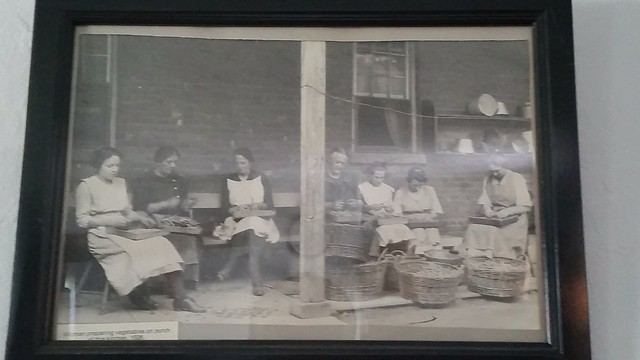 Women preparing food on the porch 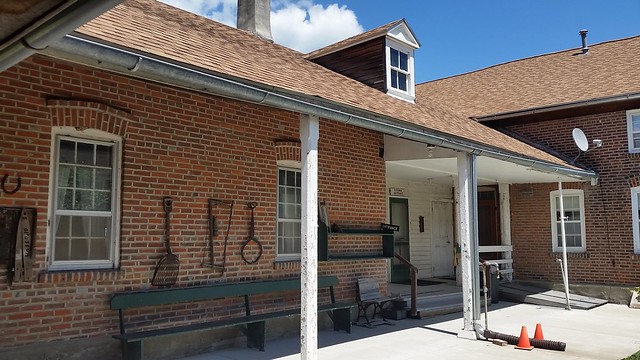 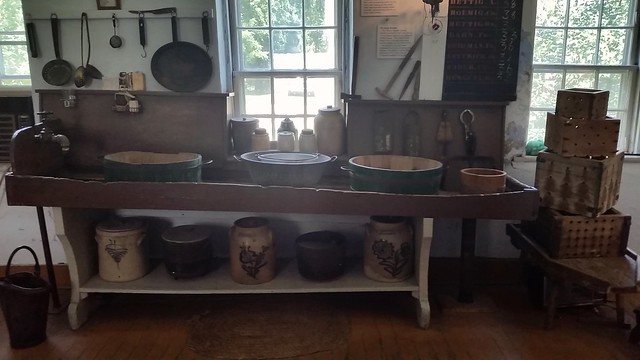 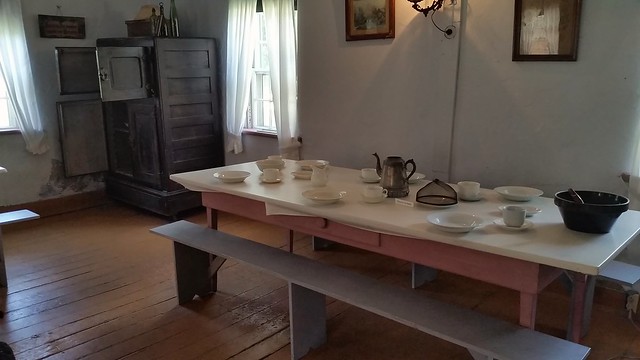 Serving area – there are two tables in this room

Across the street from the kitchen is the cooper shop.  The coopers in the communal Amana Colonies produced tubs, barrels, and other containers used throughout the community. 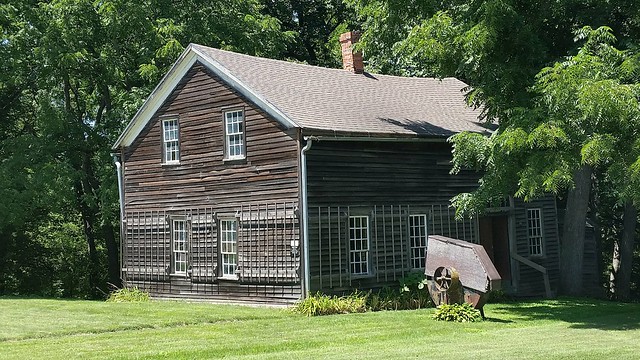 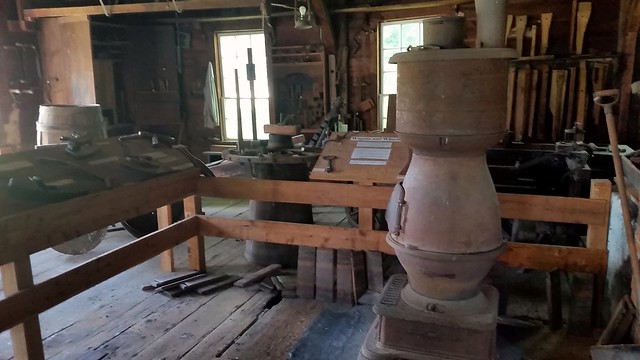 We continued west about three miles to High Amana for a visit to the High Amana General Store. 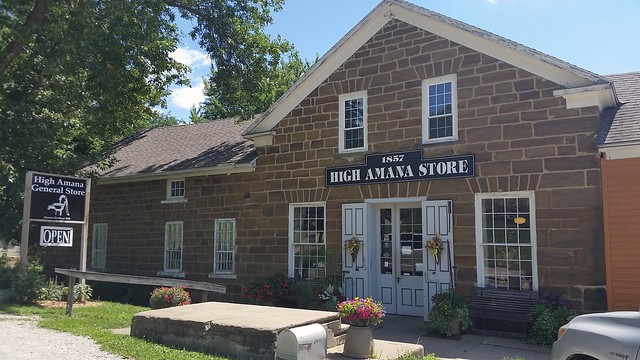 Everything from tires to Amana beverage coolers to souvenirs has been sold at the High Amana Store.  It gained importance in the 1920s as the manager expanded the merchandise to include bicycles, radios, and other popular items. Now called the High Amana General Store, the building has remained essentially unchanged as the merchandise and the store’s role in the community have changed. The pressed metal ceiling, long sales counter and other fixtures date to the 19th century. There are antique display cases in which gifts and Amana Colony made crafts are displayed, a hand pump, original patterned ceilings and other traditional decorations and furnishings. There is a kerosene pump inside for filling lamps and stoves. This pump is one of the oldest functional antiques in the store. 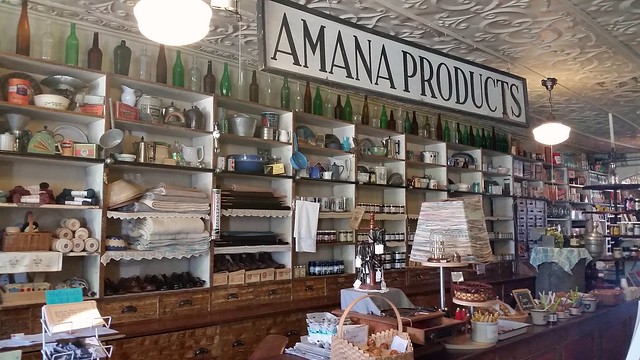 In 1931, in the wake of the Great Depression, the Great Council (the governing body) disclosed to the Amana Society that the villages were in dire financial condition. The Depression was particularly harsh in the Colony because a fire badly damaged the woolen mill and destroyed the flour mill less than ten years earlier.  At the same time, Society members were seeking increased secularism so that they could have more personal freedom.  The Society agreed to split into two organizations. The non-profit Amana Church Society oversaw the spiritual needs of the community while the for-profit Amana Society was incorporated as a joint-stock company. The transition was completed in 1932 and came to be known in the community as the Great Change.

Today the Amana Society continues to own and manage some 26,000 acres of farm, pasture and forest land.  Agriculture remains an important economic base today just as it was in communal times. Because the land was not divided up with the end of communalism, the landscape of Amana still reflects its communal heritage.  In addition, over 450 communal-era buildings stand in the seven village.  In 1965 the National Park Service designated the Amana Colonies as a National Historic Landmark.