A Visit to Oklahoma City

We left Wichita, KS on Saturday and headed south for a visit to Oklahoma City, OK.  After driving south on I-35 into the city, we turned east on I-40 and continued to Shawnee (birthplace of Brad Pitt), about 30 miles away.  The Heart of Oklahoma Expo Center has a large number of RV spots, many with full hook-ups, at a reasonable price.  We found the main section to be empty, so we selected a site at the far end.  For two of our three nights we were almost alone, with only a travel trailer in a distant site for a neighbor. 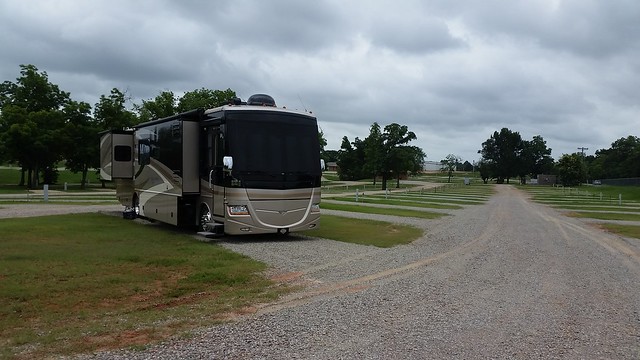 A pet peeve that many full-timers have with RV parks is that, even with numerous empty sites, the park will assign someone to the site right next to you.  The Heart of Oklahoma Expo doesn’t assign sites, you just pick one and go to the office to pay.  So we thought it was interesting when, for the last night of our stay, someone chose to park right next to us.  Are you serious!  There are about a hundred nice sites in this section of the park and you set up right next to us!  And to top it all off, they were up, slamming their door, and driving away at 6:30 the next morning! 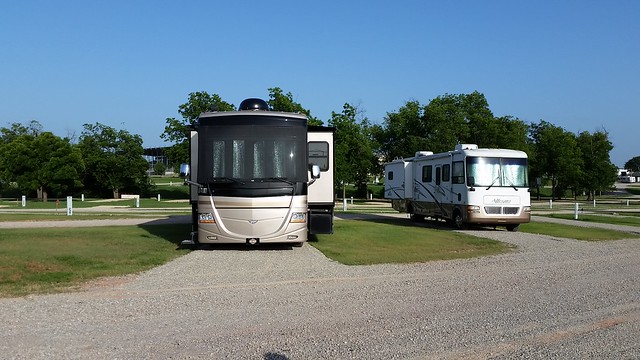 We were only in the area for a couple of days but we did manage to check out a few interesting sites.  First, we drove to Norman, a few miles south of Oklahoma City, to visit the campus of the University of Oklahoma.  We were very impressed with this campus with its large open spaces, well maintained grounds, and beautiful buildings. 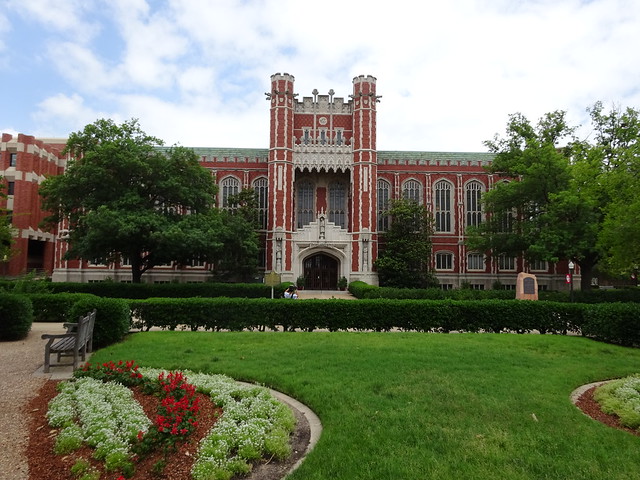 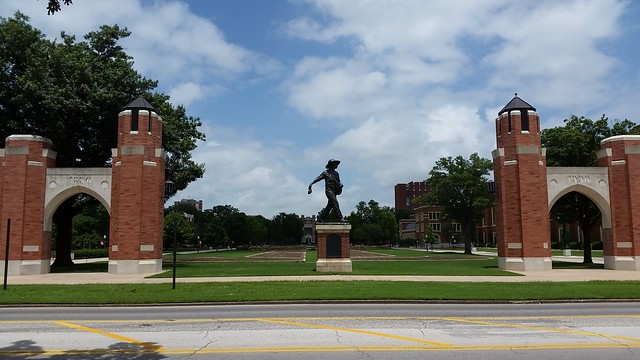 The university seal features the Seed Sower, an emblem of the first university president, David Ross Boyd.  It is said that Boyd walked across the Oklahoma prairies sowing the seeds of education, as well as literally planting many trees throughout the region.  The Seed Sower statue is at the entrance to the South Oval in the center of the campus. 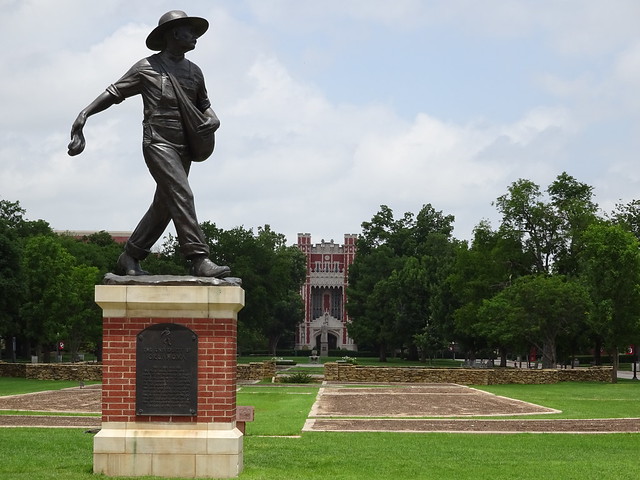 The football stadium stands almost in the center of the campus.  Despite its large size, it fits nicely into the campus without overwhelming its surroundings. 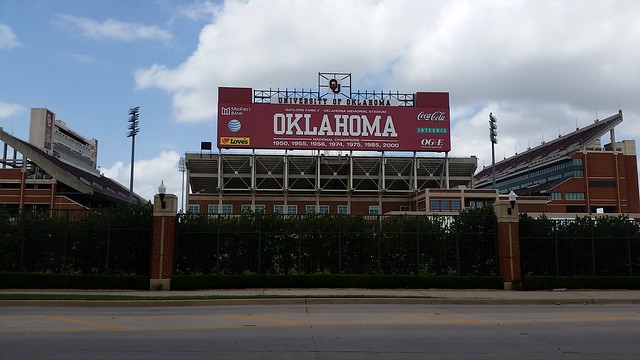 We then drove north for a visit to the town of Moore, just south of Oklahoma City to visit the area destroyed by a tornado in 2013.  Two elementary schools in the area were directly in the tornado’s path.  Briarwood and Plaza Towers sustained enough damage to be considered a total loss. Miraculously no one was killed at Briarwood Elementary but seven third graders inside Plaza Towers’ 2nd-3rd grade annex lost their lives when the structure’s walls collapsed. 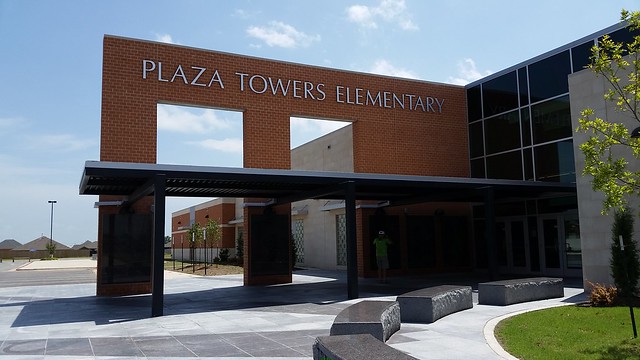 Both schools have been completely rebuilt and the entrance of Plaza Towers has a very moving memorial to the seven students killed.  Next to the entrance are seven benches.  The name of each student is engraved on the end of a bench and the stone front section of the bench depicts that student’s interests. 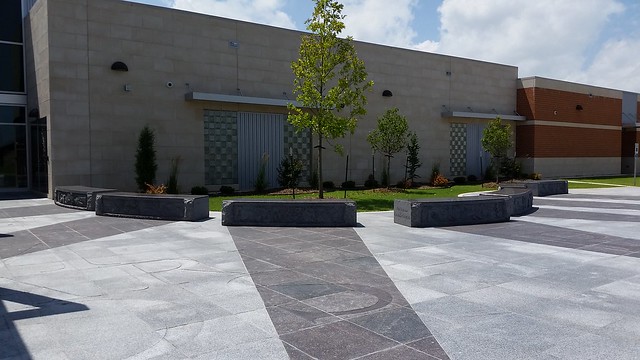 Seven silhouettes of children (three boys and four girls) are engraved onto plaques on the wall of the school entrance as if they were running, walking or skipping.  Each silhouette includes a personal effect that represent items special to the child’s life. 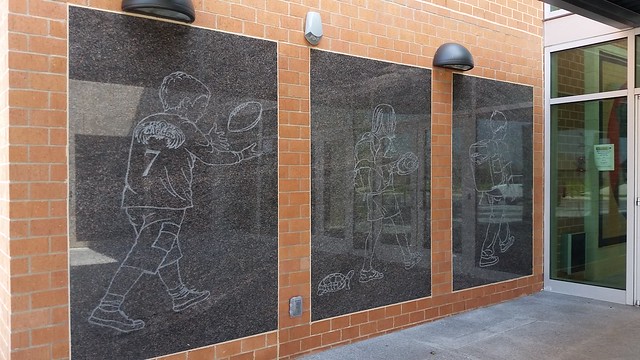 The memorial is very impressive.  While honoring the lost children, it is subtle enough that students entering the building are not constantly overwhelmed by the tragedy.

The next day we drove into Oklahoma City for a visit to the Oklahoma City National Memorial.  Thisl Memorial honors the victims, survivors, rescuers, and all who were affected by the Oklahoma City bombing on April 19, 1995.  The memorial is located on the former site of the Alfred P. Murrah Federal Building, which was destroyed in the bombing.

The most moving section of the memorial is the Field of Empty Chairs.  One hundred sixty-eight empty chairs hand-crafted from glass, bronze, and stone represent those who lost their lives, with a name etched in the glass base of each.  They sit on the site where the Murrah Building once stood.  The chairs represent the empty chairs at the dinner tables of the victims’ families. The chairs are arranged in nine rows to symbolize the nine floors of the federal building; each person’s chair is on the row (or the floor) on which the person worked or was located when the bomb went off.  The chairs are also grouped according to the blast pattern, with the most chairs nearest the most heavily damaged portion of the building. The westernmost column of five chairs represents the five people who died but were not in the Murrah Building (two in the Water Resources Board building, one in the Athenian Building, one outside near the building, and one rescuer).  The 19 smaller chairs represent the children killed in the bombing.  Three unborn children died along with their mothers, and they are listed on their mothers’ chairs beneath their mothers’ names. 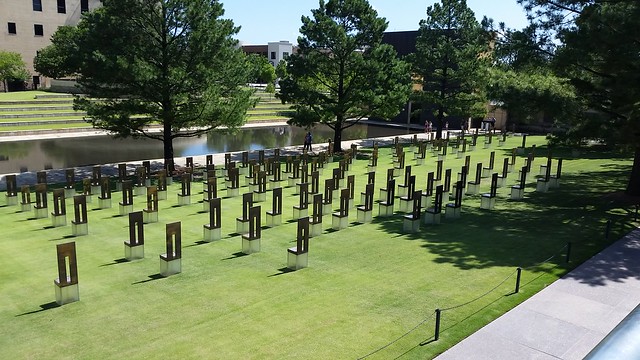 The Field of Empty Chairs

The Reflecting Pool, a thin layer of water flowing over polished black granite, runs east to west down the center of the Memorial  on what was once Fifth Street.  The tree on the far left in the photo below is near the spot where the truck containing the explosives was parked. 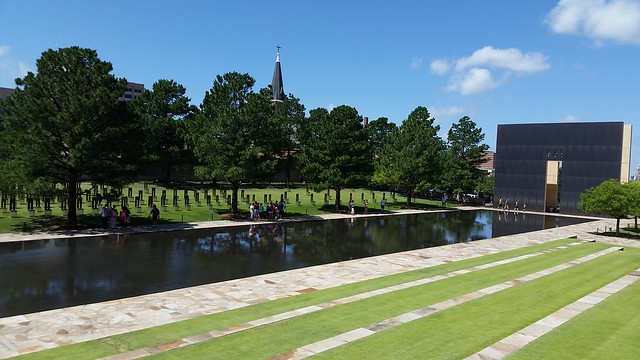 The Reflecting Pool and the Western Gate

At the ends of the Reflecting Pool are The Gates of Time, twin bronze gates that frame the moment of destruction – 9:02 – and mark the formal entrances to the Outdoor Memorial. On the eastern gate the numbers 9:01 are etched, representing the last moments of peace, while its opposite on the western gate, 9:03, represents the first moments of recovery. 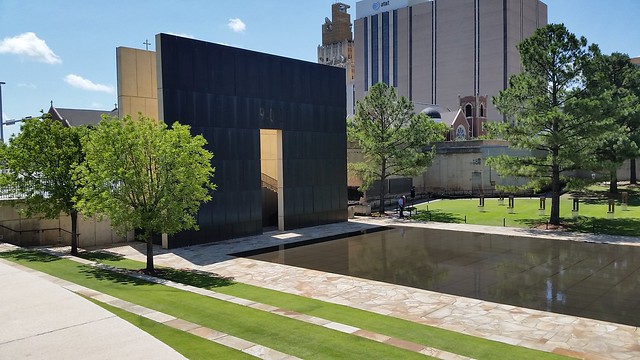 The Survivor Tree is an American elm on the north side of the Memorial, this was the only shade tree in the parking lot across the street from the Murrah Building.  Commuters arrived early to get one of the shady parking spots provided by its branches.  Photos of Oklahoma City taken in the 1920s show the tree to be about 100 years old.   Heavily damaged by the bomb, the tree survived after nearly being chopped down during the initial investigation, when workers wanted to recover evidence hanging in its branches and embedded in its bark.  The force of the blast ripped most of the branches from the Survivor Tree, glass and debris were embedded in its trunk and fire from the cars parked beneath it blackened what was left.  Most thought the tree could not survive.  Almost a year after the bombing, family members, survivors and rescue workers gathered for a memorial ceremony by the tree noticed it was beginning to bloom again.  The Survivor Tree now thrives, and the Outdoor Memorial design includes a mandate to feature and protect the tree.  For example, one of the roots that would have been cut by the wall surrounding the tree was placed inside a large pipe, so it could reach the soil beyond the wall without being damaged.  The decking around the tree was raised several feet to make an underground crawlspace; workers enter through a secure hatchway and monitor the health of the tree and maintain its very deep roots. 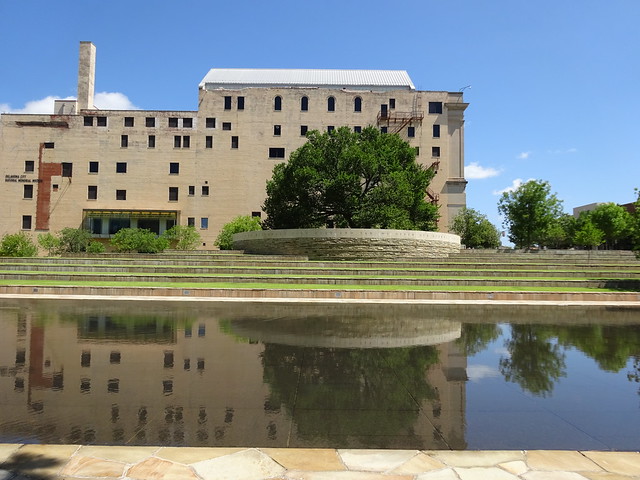 More than 5,000 hand-painted tiles from all over the United States and Canada were made by children and sent to Oklahoma City after the bombing in 1995.  Most are stored in the Memorial’s Archives, but a sampling of tiles is on the wall in the Children’s Area. 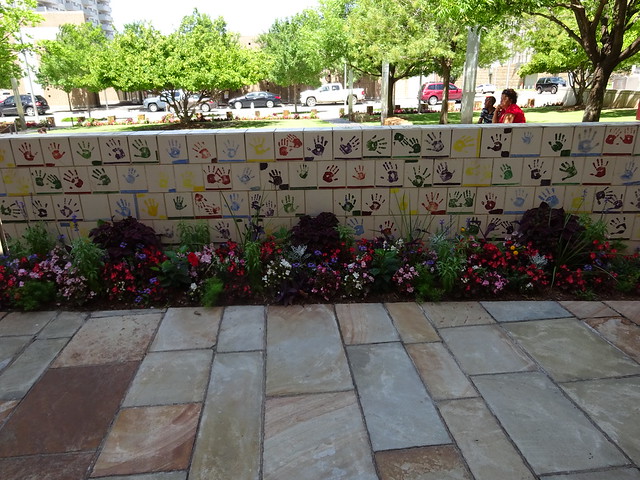 Tiles in the Children’s Area 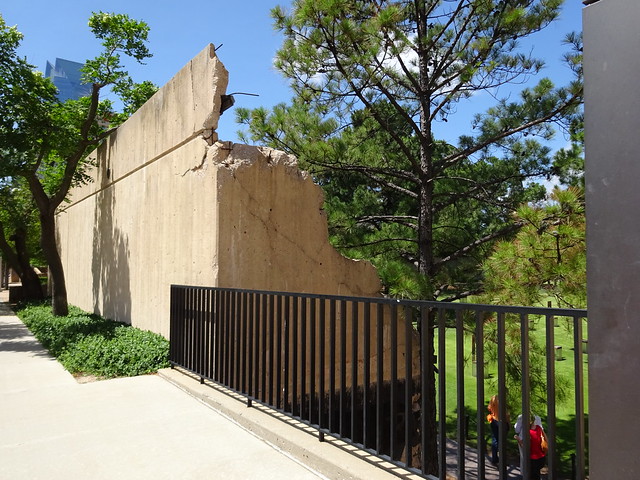 The only remaining part of the original federal building

Later we made a visit to the Bricktown neighborhood for lunch.  Bricktown was once a decaying warehouse area but it has been renovated and now is home to a number of restaurants, bars, and parks.  Top attractions include the mile long Bricktown Canal and the Chickasaw Bricktown Ballpark, home to the Oklahoma City Dodgers, triple A affiliate of the L.A. Dodgers. 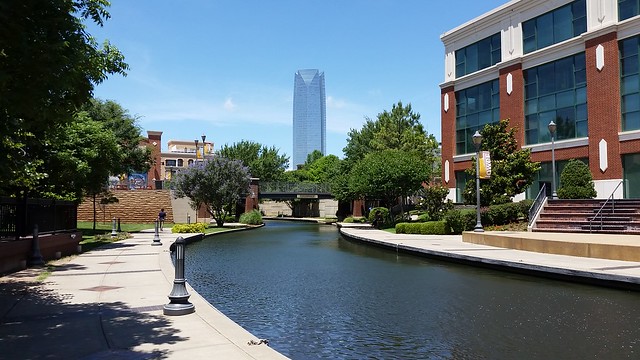 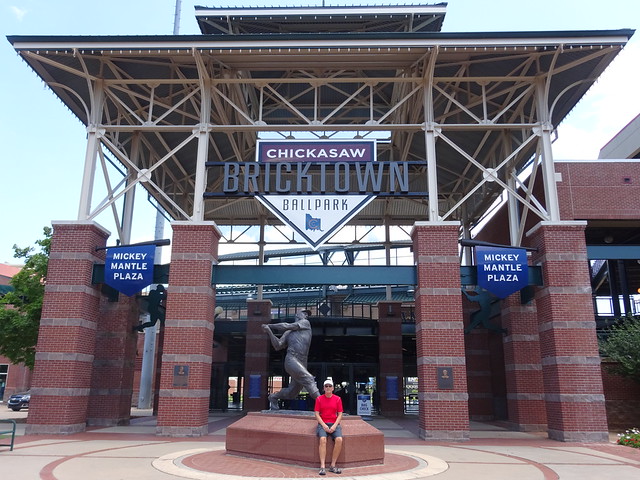 We are now continuing east on I-40 headed for Russellville, AR for a short stay in a Corps of Engineers Park outside of the town.

36 Responses to A Visit to Oklahoma City