In our last blog we were just finishing our visit to Oklahoma.  We left there and continued our journey east in I-40.  Since, like many people, we don’t like to drive long distances, we set our sights on Russellville, AR, about 200 miles away. 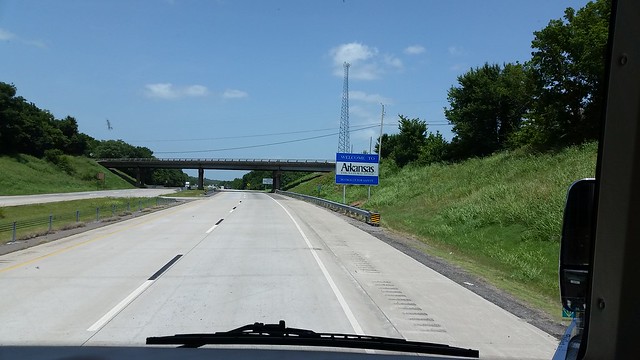 Our first visit to Arkansas

We arrived at Old Post Road COE (Corps of Engineer) Park early in the afternoon and quickly found our site.  The site is a bit low in the back so we had some difficulty getting the motorhome level without lifting the rear wheels off the ground (not a good idea).  With the temperature in the high 90s and the dew point in the  70s we were pretty wet by the time we were settled in for our two night stay. 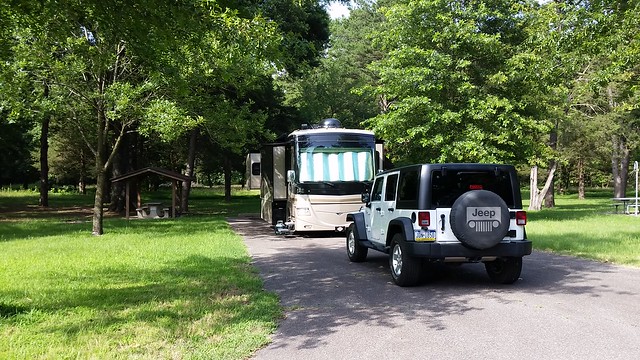 This park is right along the Arkansas River just below the Dardanelle Lock and Dam.  The dam is not very high as its purpose is not flood control, it is to increase the depth of the river behind it for navigation purposes. 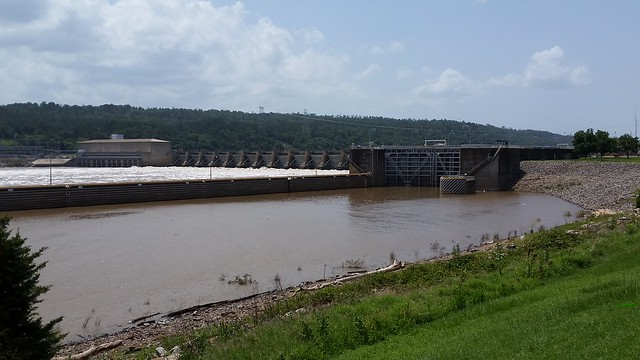 The Dardanelle Lock and Dam

We didn’t do too much during our stay in Russellville as the heat and humidity continued to be oppressive.  We then drove about eighty miles further east on I-40 for a visit to Little Rock and set up in another COE park, Maumelle Campground, a few miles west of the city. 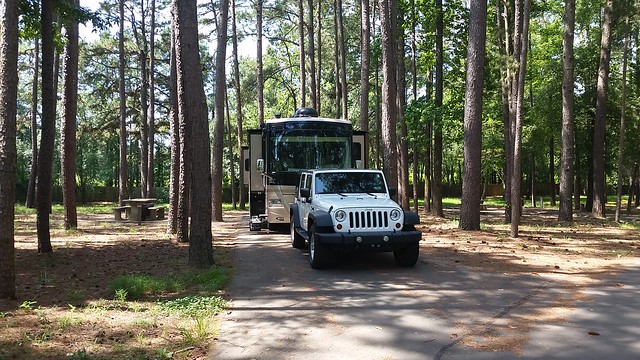 While in Little Rock we decided to pay a visit to the William J. Clinton Presidential Center. First a disclaimer:  The writer of this blog is a Republican who did his best to remain objective during this visit.  Some displays in the center made this attempt very difficult!

The first thing that struck us as a bit odd about this facility was the two rather large, moving dinosaurs next to the main entrance and a large banner announcing a dinosaur exhibit on display for six months. 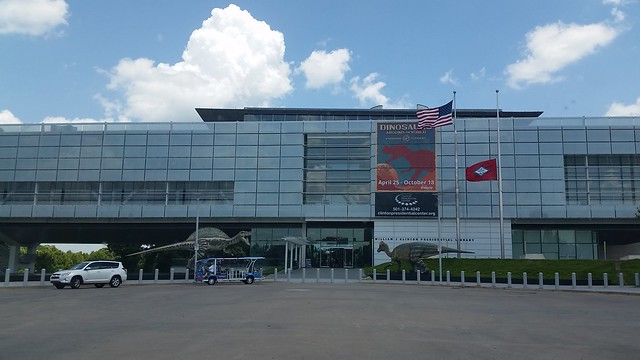 We asked someone about this and were given a lengthy explanation that boiled down to it being an attempt to attract families with children to visit the center.  We inquired as to the connection between Clinton and dinosaurs and found it was the fact that he designated the Grand Staircase-Escalate National Monument as a national monument in 1996 using his authority under the Antiquities Act.  Since 2000, numerous dinosaur fossils over 75 million years old have been found there.  Go figure!

The displays in the center are informative and nicely arranged, but the information was a bit over the top if you are a Republican.  John expected to see a picture of Clinton in a superman suit as it appears he saved the country from the evil Republicans during his time in office. OK, end of rant . . .

Little Rock has a nice biking path along the Arkansas River, but one look at the temperature on the dash of the Jeep in the photo below will explain why we decided not to explore it. 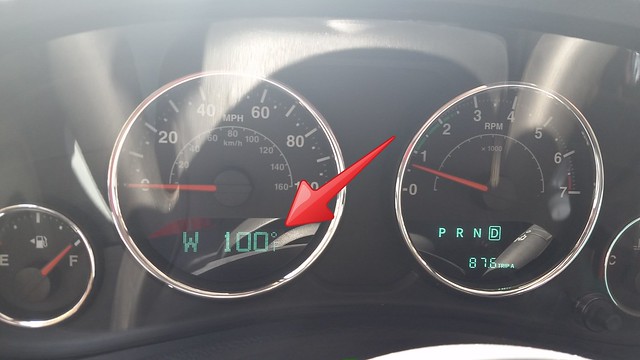 We did take a ride past the famous Little Rock Central High School.  The school was the focal point of the Little Rock Integration Crisis of 1957.   Nine African-American students, known as the Little Rock Nine, were denied entrance to the school in defiance of the 1954 Supreme Court ruling ordering integration of public schools.   This provoked a showdown between the Governor Orval Faubus and President Eisenhower that gained international attention.  Eisenhower ended up ordering army troops to insure the students were allowed into the school and troops patrolled inside and outside the school for the remainder of the school year. 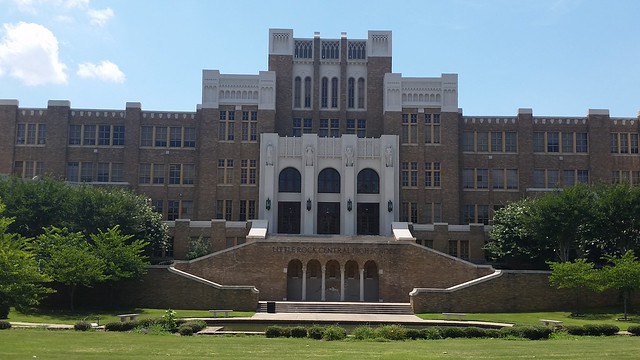 The next day we continued east on I-40 to Tom Sawyer’s RV Park in West Memphis, AR.  This is a very nice park sitting between the Mississippi River and the flood controlling levee so it tends to flood quite frequently. 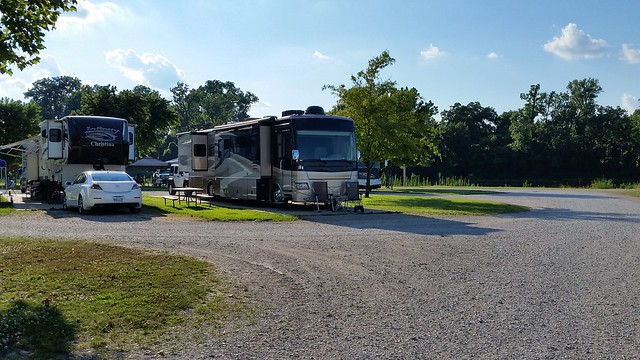 We were assigned an end site on a concrete pad with a great view of the river.  We placed our chairs in the shadow of the motorhome and enjoyed watching the barges go up and down the river. 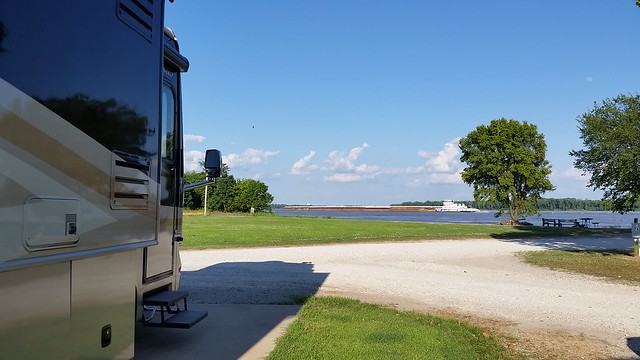 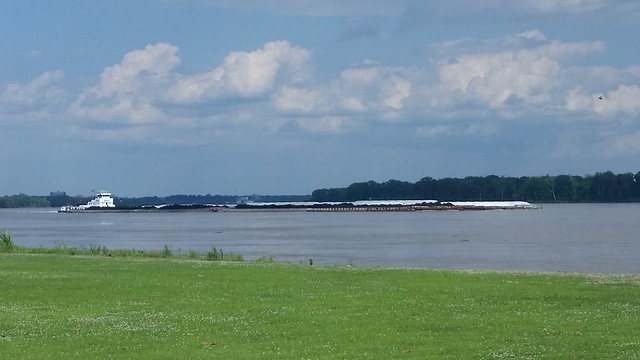 The park is very prepared for the frequent floods.  The office is on wheels and the main electrical boxes are placed about 15 feet up telephone poles.  The photo below shows the laundry room located on the second floor above a concrete room. 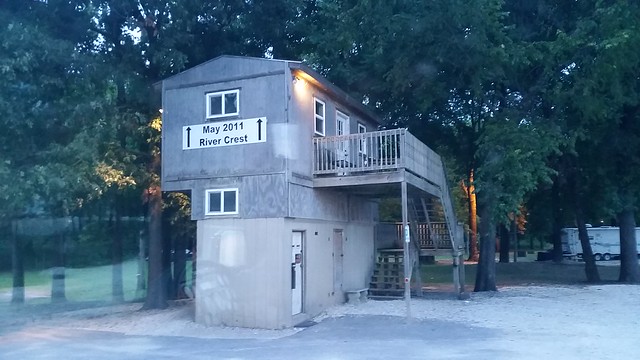 Our only full day in Memphis was filled with sight-seeing.  We drove by Graceland and found Elvis had left the building, so we decided not to join the thousand visitors lining up in the hot sun for a visit.  Instead we drove downtown for a visit to Sun Studio, where an 18 year old singer named Elvis walked in one day in August of 1953 to record a song for his mother. 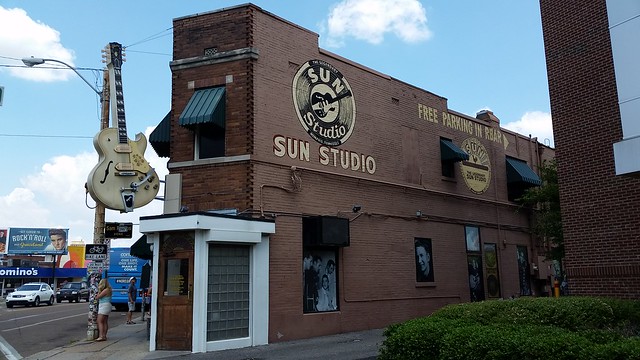 On December 4, 1956, Elvis stopped by the studio while Carl Perkins was there cutting new tracks, with Jerry Lee Lewis backing him on piano.  Johnny Cash was also in the studio and the four started an impromptu jam session. Sam Phillips left the tapes running and the recordings survived and have since been released under the title Million Dollar Quartet. 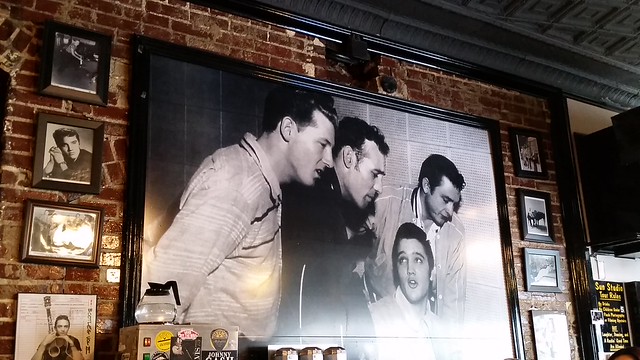 We continued into the downtown for a visit to the Peabody Hotel to check out the famous marching ducks. 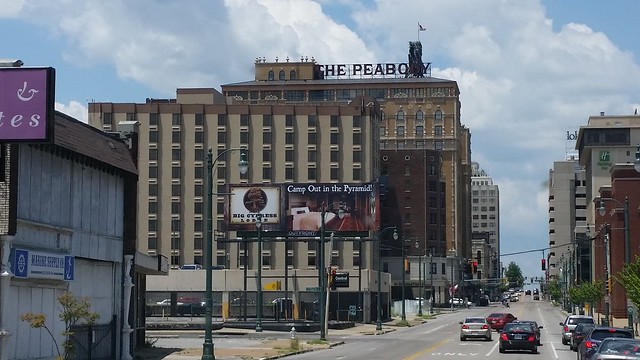 The marching ducks are part of  a custom dating back to the 1930s.  The general manager of the time had just returned from a weekend hunting trip in Arkansas.  He and his friends, after enjoying an adult beverage or two, found it amusing to leave three of their live English Call Duck decoys in the hotel fountain. The guests loved the idea, and since then, five Mallard ducks (one drake and four hens) have played in the fountain every day. 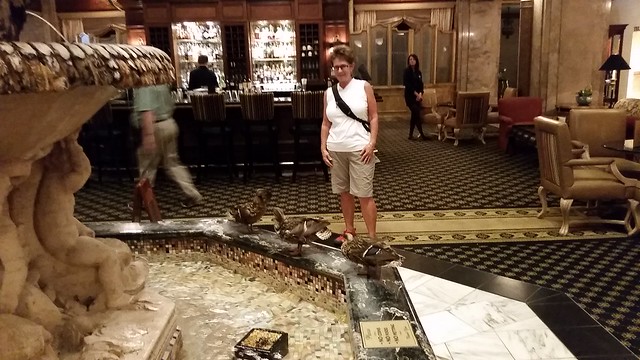 In 1940, a Bellman by the name of Edward Pembroke volunteered to care for the ducks. Pembroke was given the position of “Duckmaster” and served in that position until 1991. As a former circus animal trainer, he taught the ducks to march into the hotel lobby, which started the famous Peabody Duck March.  Every day at 11:00 a.m., the Peabody Ducks are escorted from their penthouse home on the Plantation Roof to the lobby via elevator. The ducks, accompanied by the King Cotton March by John Phillip Sousa, then proceed across a red carpet to the hotel fountain, made of a solid block of Italian marble. The ducks are then ceremoniously led back to their penthouse at 5:00 p.m. 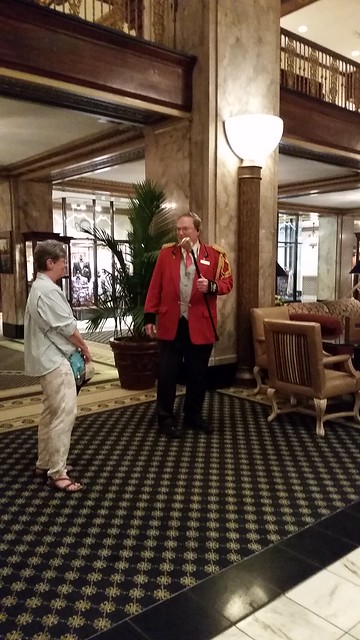 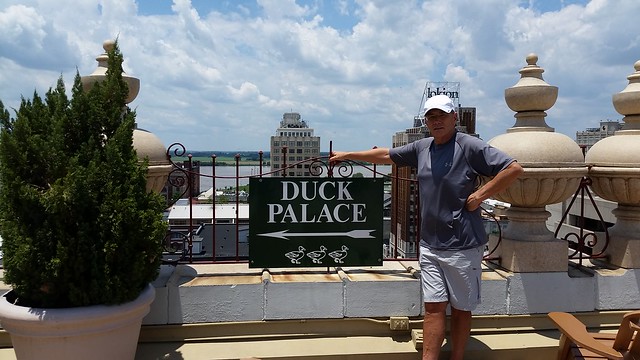 On the roof headed for the Duck Palace 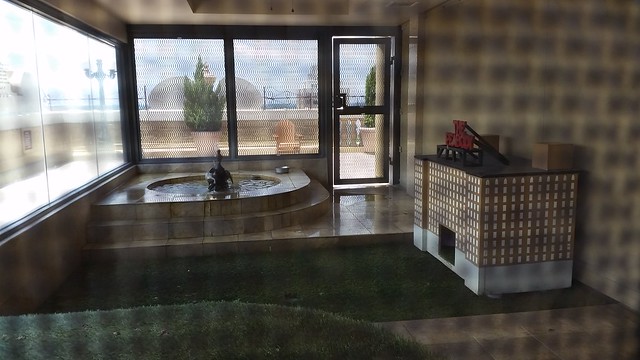 Since it was early afternoon the duck march was too long a wait for us, so we headed to nearby Beale Street, famous as the birthplace of the blues. 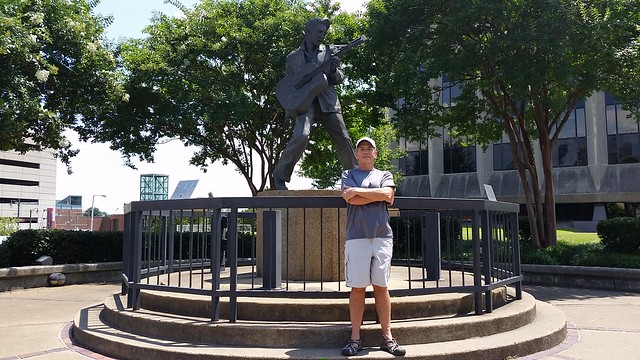 The King! (that’s a statue of Elvis in the background) 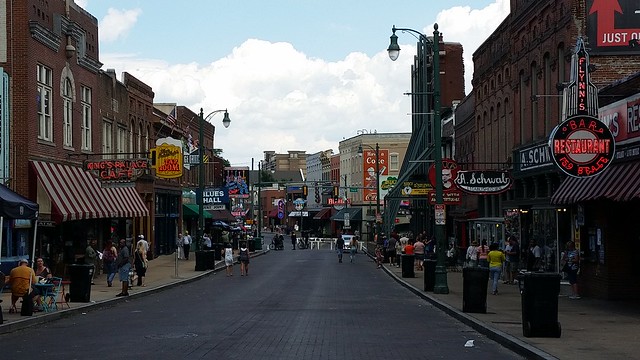 The main section of Beale Streat

Beale Street is lined with bars and restaurants offering live music and a variety of menus.  We stopped in a small park to listen to a band play.  They were pretty average and only attracted a small group of listeners and earned just a few tips. 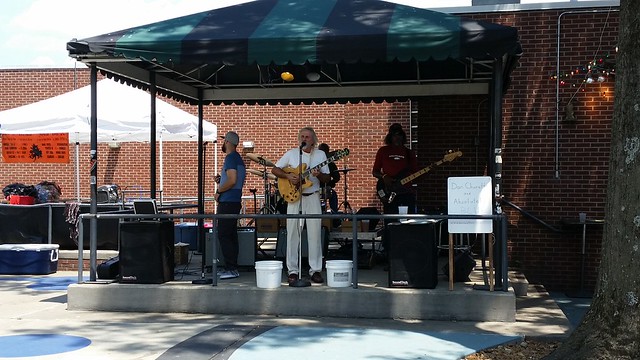 The sidewalks along Beale Street honor most of the great blues musicians with musical notes containing their names.  The most famous is the recently deceased B.B. King. 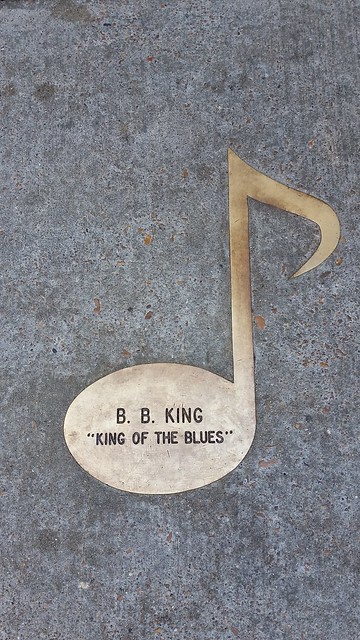 We couldn’t pass up lunch in B.B. King’s Blues Club.  After all, he was known as the “King of the Blues.” 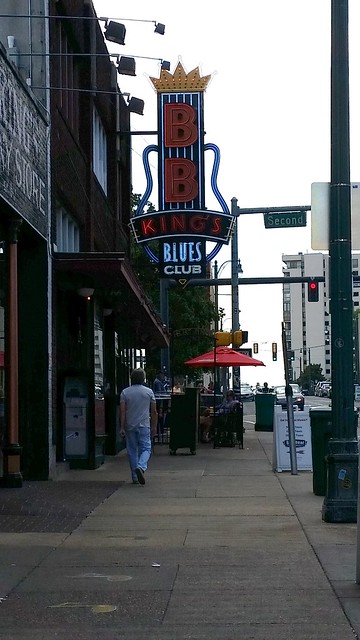 The food was just average in B.B.’s club, but the band playing that afternoon was outstanding! 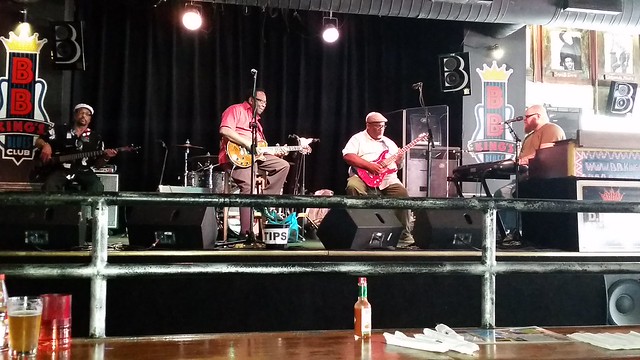 The next day was another travel day.  Atlanta is four hundred miles away, farther than we care to drive in a day, so we thought we would divide that in half and stop after about two hundred miles (our usual one day distance).  But we couldn’t find a good place to stay for a night near the highway and there was a threat of rain the following day, so we decided to just dig in and do the drive in one day.  If you’ve ever been through Atlanta, you know that the traffic is terrible, especially during rush hour.  So we decided to leave West Memphis at first light so we could arrive in Atlanta early in the afternoon. 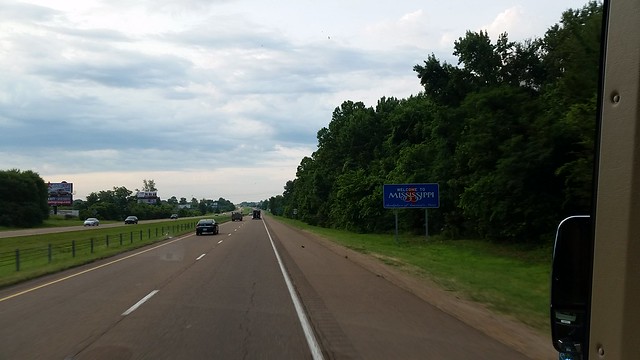 Our strategy paid off as we arrived in the Atlanta area in mid-afternoon (we lost an hour changing time zones) and, although traffic was heavy it kept moving. 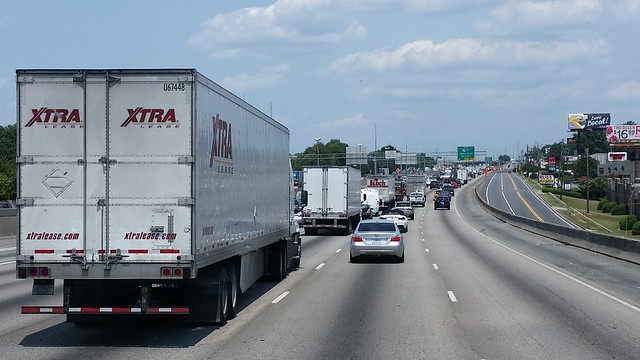 We arrived at Jones RV, just off of I-85 north of the city and quickly got set up.  The park is not the nicest we have stayed in but it is conveniently located to our son’s home. 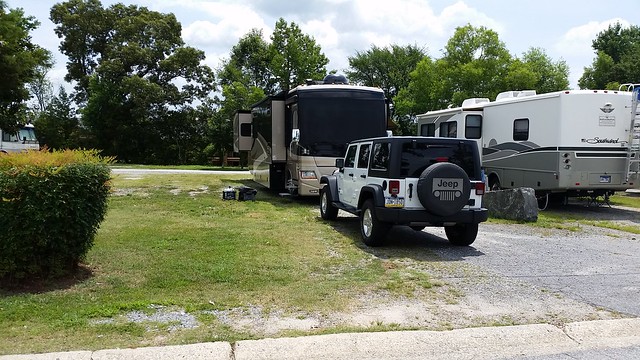 Remember that beautiful view of the Mississippi River in front of us from the photo at the beginning of this blog?  Well, that is long gone.  The photo below shows our view here at Jones RV! 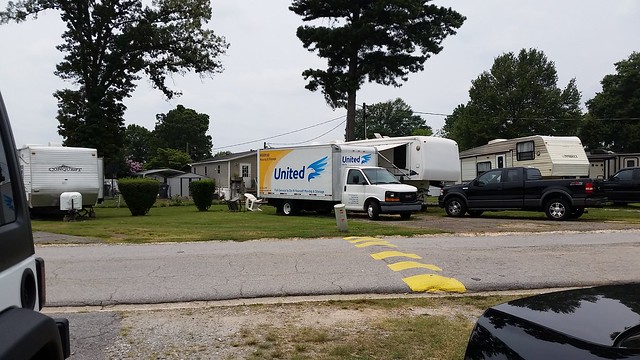 While here John completed a couple of minor repairs in the motorhome.  The most important one was to replace the pump in the Splendide washer/dryer.  The impeller (the blade that pushes the water) came off the shaft in the pump while we were in Denver and a call to the company tech line revealed that the only fix is a new pump. 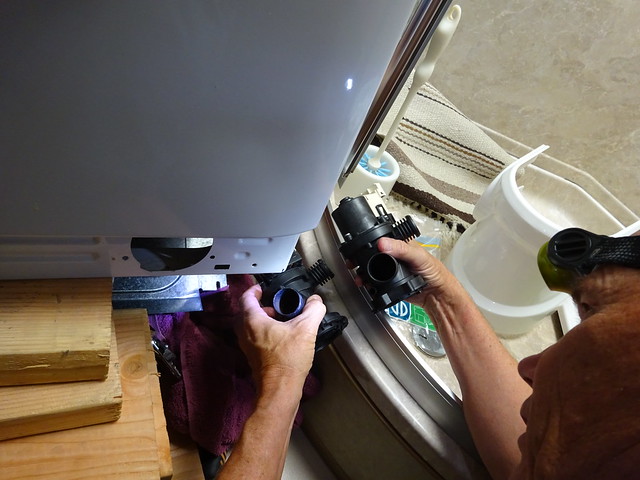 The old pump and the replacement

Replacement of the pump is fairly simple, but getting to it is a bit difficult.  The tech said to just tip it over on its side and remove the thin metal panel on the bottom.  But that would require moving it out to the living area, not an easy task as the unit is quite heavy.  So John just moved the unit out of the cabinet and propped it up with a pile of wood.  He then just bent the metal panel down, giving him access to the pump.  The metal panel is now a bit out of wack but it is not visible so that doesn’t matter.  Oh boy, no more laundromats!

We’ll be in Atlanta until Saturday, then move to Gaffney, SC to get the motorhome serviced.  They don’t have any appointments available for a few weeks so we’ll be “walk-ins,” which means we hope for a cancellation or they are able to fit us in after those with appointments have all work completed.  So our stay there may be brief, or it may not!

53 Responses to Oklahoma to Atlanta