A Brief Visit to Wichita, KA

We dropping our daughter, Jessica, off at the Denver Airport on Wednesday morning for her return flight to Baltimore, returned to the motorhome, finished packing up, and headed east on I-70.  After about 250 miles we pulled into High Plains RV Park in Oakley, KS for the night.  We had stopped here two years ago so we knew it was a good spot for an overnight stay.

The next morning we were ready to head out early but a thunderstorm moving across central Kansas caused us to delay a couple of hours.  But just before 11:00 we were back on the highway continuing to the east.  At Salinas we turned south on I-135, headed for Wichita.  After another 250 miles we stopped for the night at Payne Oil RV Park.  OK, the name sounds a little strange but it turned out to be a decent place.  Years back the owner of the oil company decided to add a small RV park and a nine hole golf course to his property across from the oil company office.  The golf course doesn’t seem to exist any more but there are about 15 RV sites offered on a first come first served basis.  If you arrive before five you pay at the oil company office.  Arrive later and you put your money in a metal container next to the door.  There are no amenities, but the sites are level,  the full hook-ups work well, and it’s only $20 a night.

We intended to just stay here one night but, since Wichita is only 20 miles down the road, we decided to stay another night and spend a day looking around the city on our bikes.  Wichita has many miles of bike paths and one runs right along the Arkansas River.  We parked near the convention center and quickly road across the river. 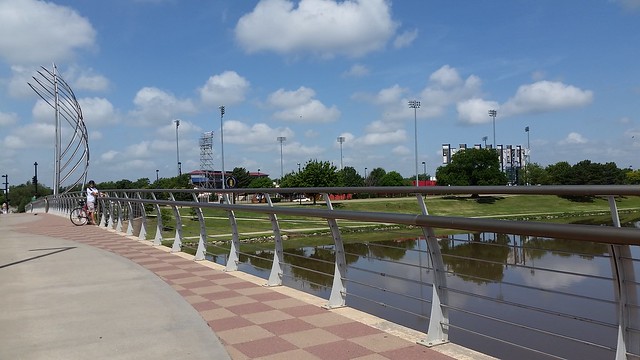 Once on the other side we biked upstream along the river bank.  Friends Steve and MonaLiza were here just a couple of days ago and said the river was very high from all the recent rains.  We could see debris on the path in spots indicating the water had recently covered it, but the river has returned back to within its normal banks. 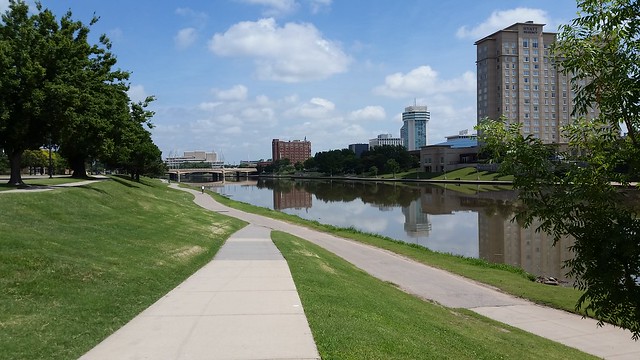 At the confluence of the Arkansas and Little Arkansas Rivers is a beautiful statue called The Keeper of the Plains.  The statue is a 44 foot high steel sculpture by Kiowa-Comanche artist Blackbear Bosin. It stands adjacent to the Mid-America All-Indian Center. Surrounding the base of the statue are multiple displays which describe the local tribes that used to inhabit this area. 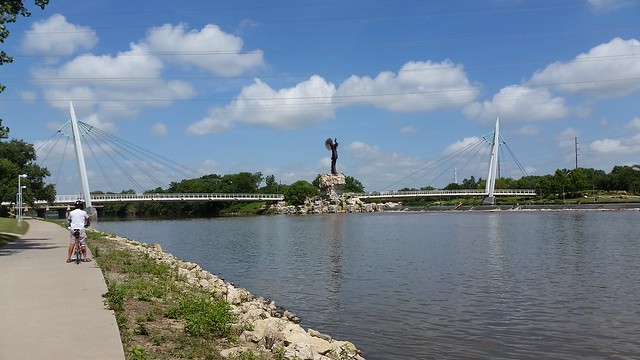 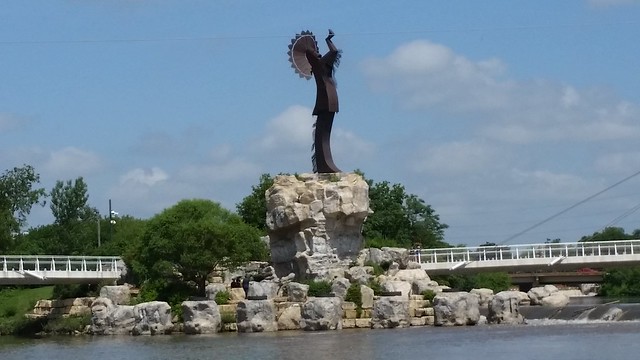 We continued north on a bike trail a few miles before heading east on a surface street headed for a visit to the campus of Wichita State University. 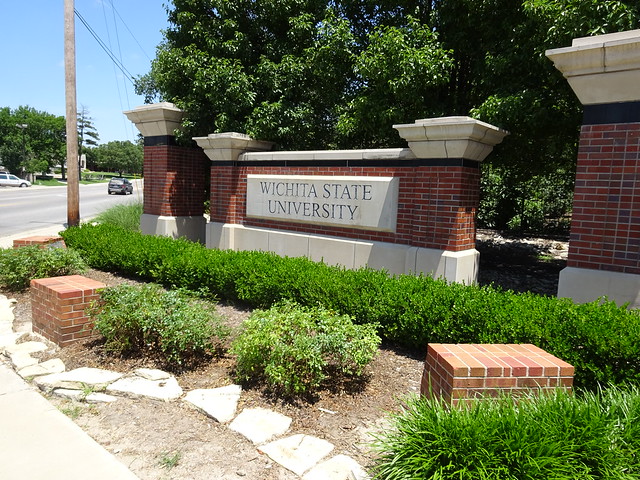 The name for the school’s athletic teams is the Shockers and, collectively, students are also referred to as being “Shockers.”  The name reflects the university’s heritage. Early students at what was then Fairmount College earned money by shocking, or harvesting, wheat in nearby fields.  Early football games were played on a stubbled wheat field.  Pep club members were known as Wheaties.  Tradition has it that in 1904 football manager and student R.J. Kirk came up with the nickname Wheatshockers.  Although the Wheatshockers name was never officially adopted by the university, it caught on among the fan base.  Newspaper writers also liked it because it was easily shortened to “Shockers” in headlines, and the shorter name was officially adopted by around the time Fairmount became the Municipal University of Wichita in 1926. 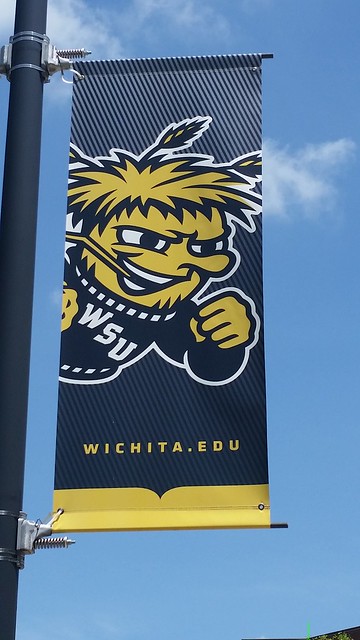 While the men’s basketball team has had great success in the past couple of seasons, baseball is the top sport here.  The men’s baseball team is college baseball’s highest winning team for the past 31 years, with numerous conference championships and NCAA tournament appearances.  The baseball team won the national championship in 1989, and was runner-up in 1982, 1991, and 1993.  They play home games in a beautiful little ball park. 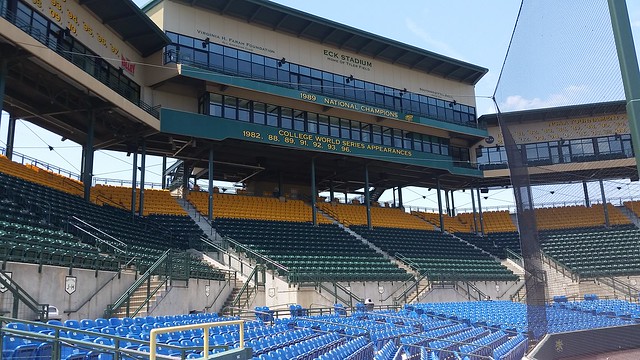 After exploring the campus, we rode back downtown to enjoy a late lunch.  MonaLiza had recommended a stop at Tanya’s Soup Kitchen on Douglas Street and we were not disappointed.  We enjoyed a large cup of soup and a sandwich and both were delicious! 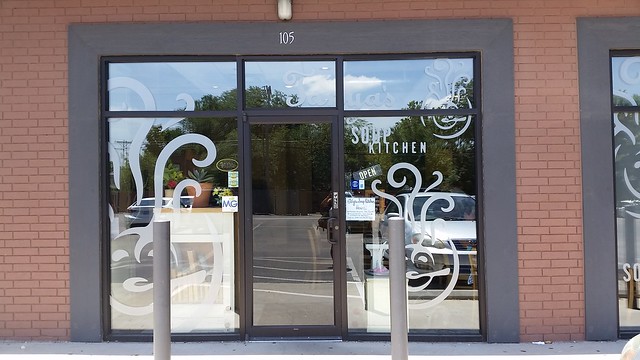 Tomorrow we continue our journey with a stop in Shawnee, Oklahoma, just east of Oklahoma City.  A check of the weather forecast shows no tornadoes or  heavy rains for the next few days, so we should be safe to visit the city without drowning or being blown away!

27 Responses to A Brief Visit to Wichita, KA