One of the reasons for our visit to Denver was to be near an airport.  Our daughter, Jessica, teaches school and usually flies to wherever we are located for a visit at the end of the school year.  Her plane was scheduled to land around six in the evening, but severe storms in the Denver area caused the airport to shut down for a few hours.  So while we sat in the terminal, Jessica stopped in Omaha so the plane could take on fuel and wait for the storm to pass.  She finally arrived after nine, tired but so pleased to see her parents! 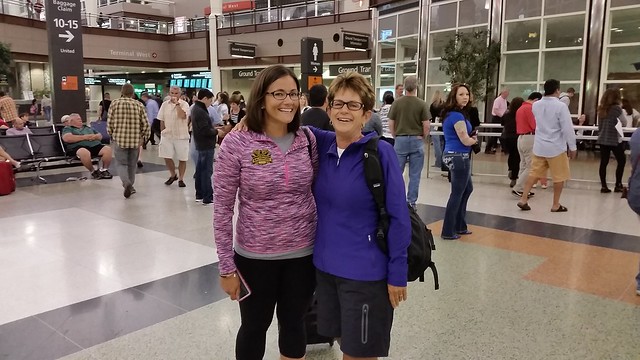 The first day of her visit we drove in to the city to check out the flagship REI store (Recreational Equipment, Inc).  Leaving the Jeep in the REI parking area, we walked across the South Platte River to the Wynkoop Brewing House (Colorado’s first brewpub and Denver’s first microbrewery) which is just south of Coors Field (home of the baseball Colorado Rockies). 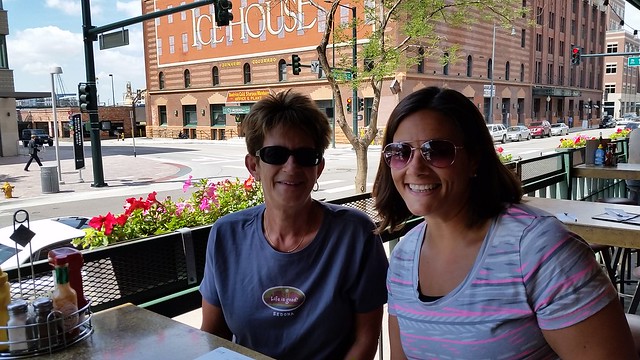 After tasting some of Denver’s finest brews, we walked back to REI for some shopping before heading to another brew house, Breckenridge Brewery, so Jessica could sample some of her favorite beer, Breckenridge Vanilla Porter.  The beer was very good, while the food was about average. 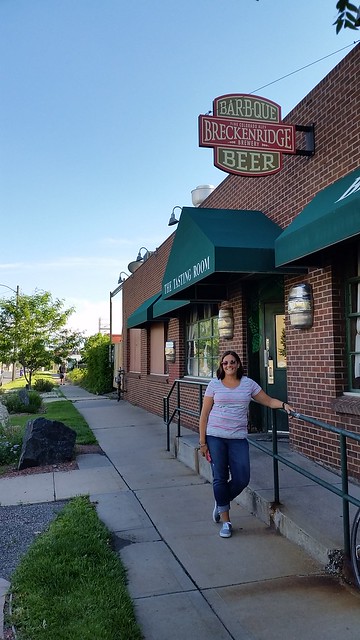 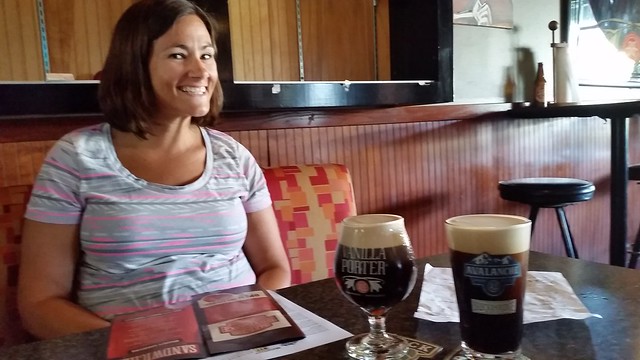 After recovering from our brewery visits, the next day we headed into the mountains for a bit of hiking.  Mt. Evans is about a forty-five mile drive to the west from us and, with an elevation of over 14,000 ft. boasts the highest paved auto road in North America.  At that high elevation snow keeps the road closed for most of the year, but their website said that it was open, so off we went. 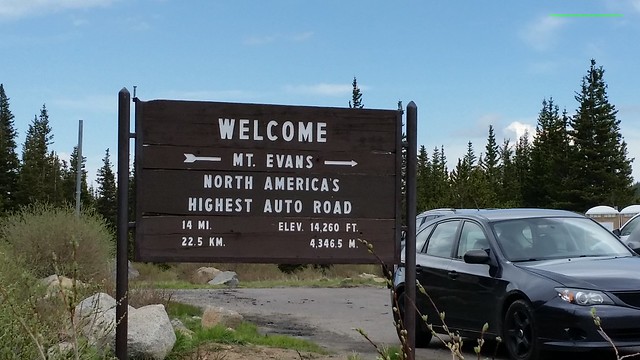 But when we arrived at Echo Lake, where the road to the top of the mountain begins, we found that the website was incorrect and the road was still closed.  An employee inside the Echo Lake Lodge said that recent snows had re-covered the road and there was still a large amount of damage to be repaired before the road could open for the season.  It would probably be mid July before it opened.  So we just parked near the lodge and headed out to hike to the Chicago Lakes since the trailhead was here. 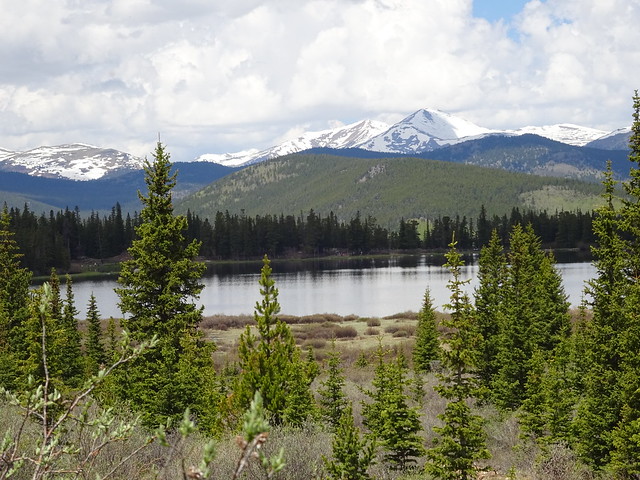 The trail begins next to the lodge and goes through a pine forest for about a half mile.  A bit of snow covered the trail in some spots, but it was mostly smooth and dry here. 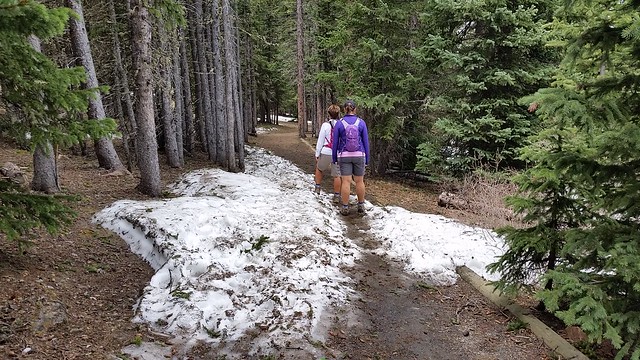 The trail then descends down a fairly steep series of switchbacks for approximately a mile to the bottom of a valley.  A nice wide bridge was there to help us across the strong waters of the Chicago Creek. 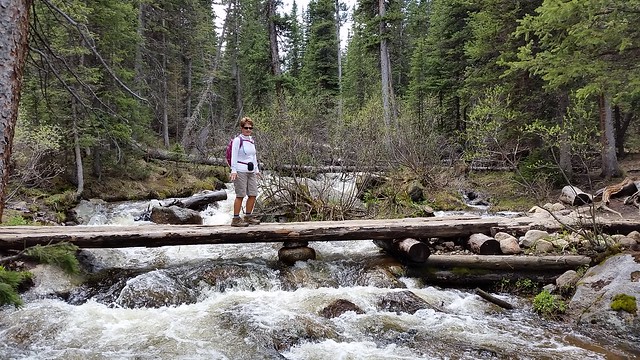 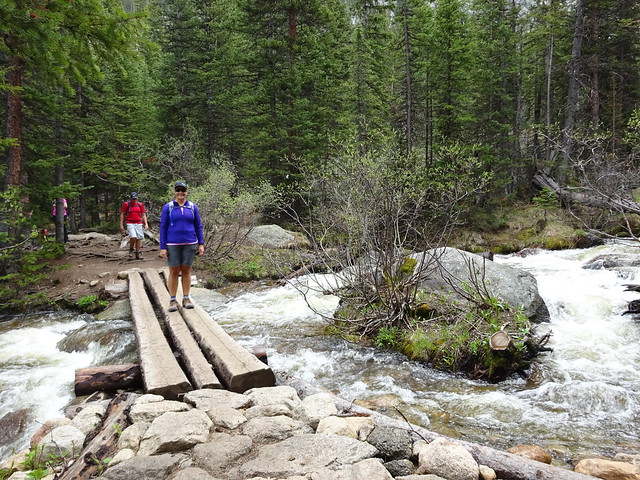 After crossing the creek the trail joins a dirt road and goes steeply uphill for about a half mile to the Idaho Springs Reservoir. 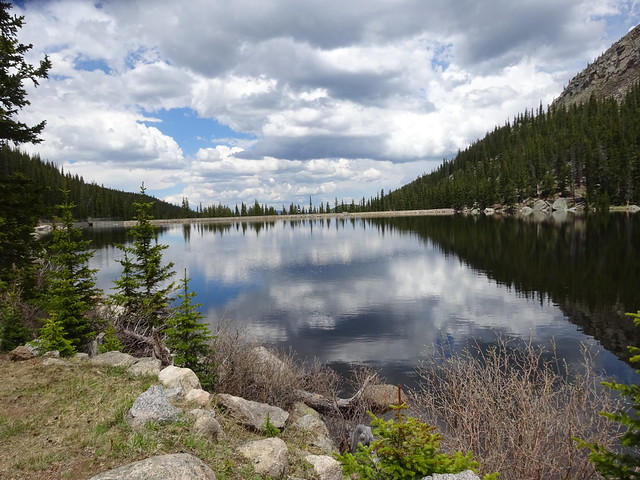 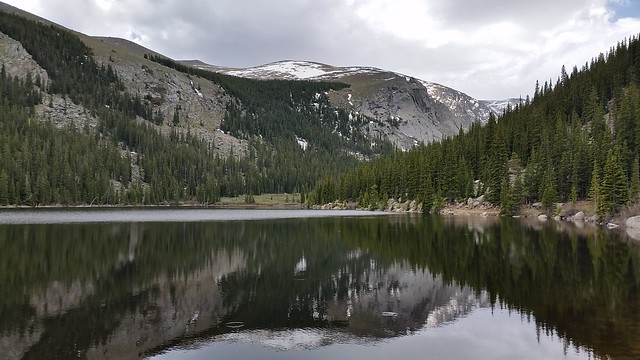 Hiking at over 10,000 feet takes a toll on you (Jessica was at the ocean two days earlier) so we decided to enjoy lunch along the water then head back. 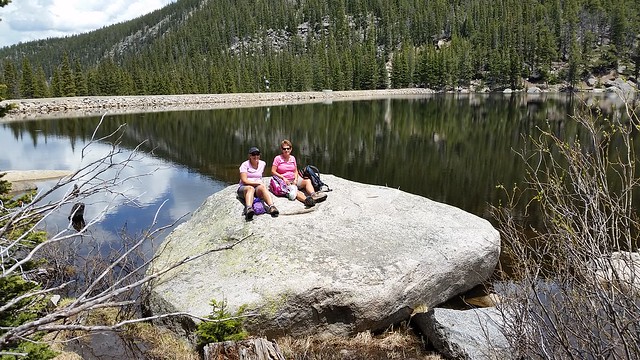 The perfect spot for lunch!

All that steep down hill we had coming to this location, turned into an uphill climb on the return hike! 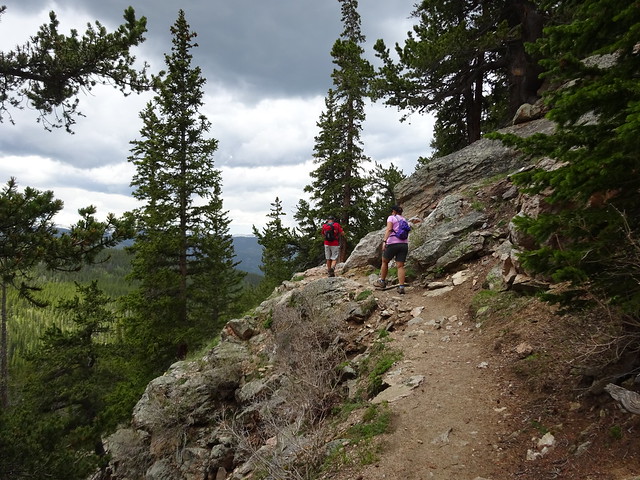 Returning to the Jeep after hiking about six miles, we drove the scenic route (although all routes seem to be scenic) back to the city.  As we drove through the small town of Evergreen we noticed a herd of Elk feeding near the road. 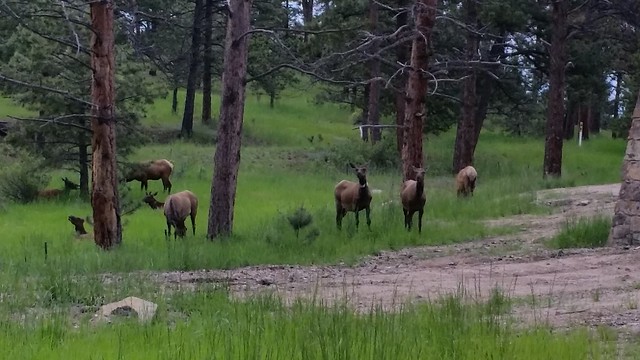 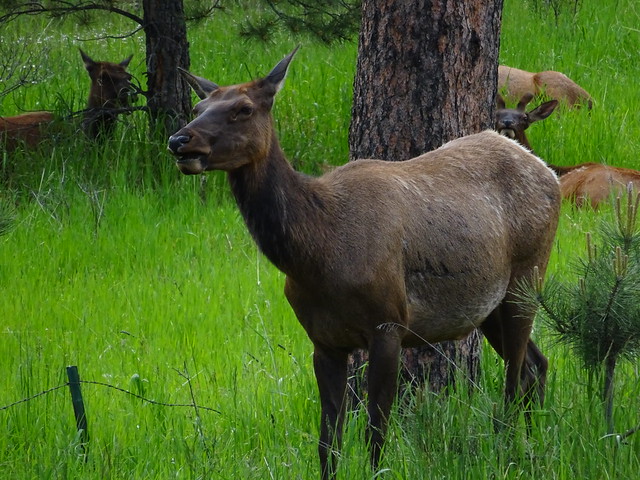 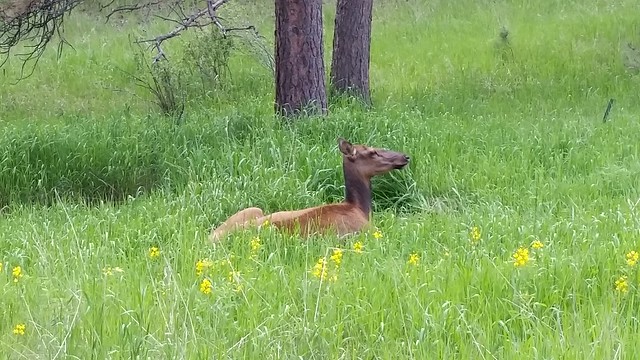 Our next two hikes were repeats of ones we did earlier in our stay with some RV friends.  The first of these two hikes was on the Carpenter Peak Trail, which begins in the red rocks of Roxborough State Park.  The trail begins at the visitor center and winds its way up a thousand feet to a great view of the mountains to the west and the prairie to the east. 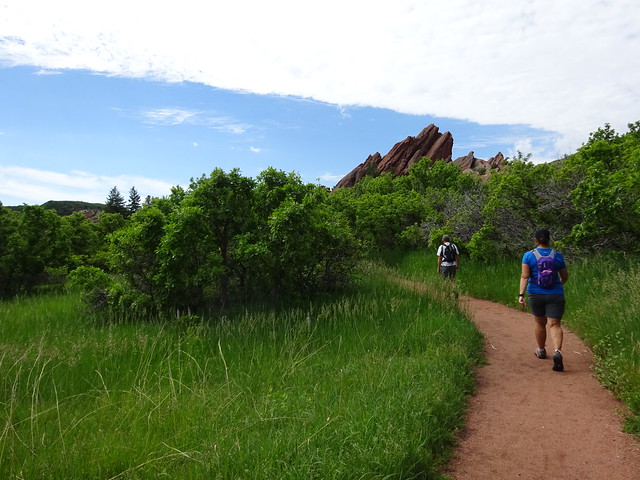 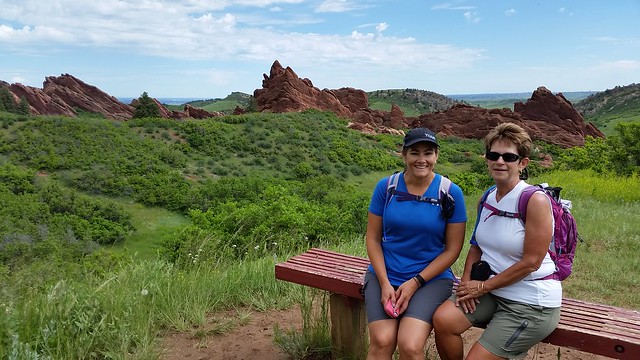 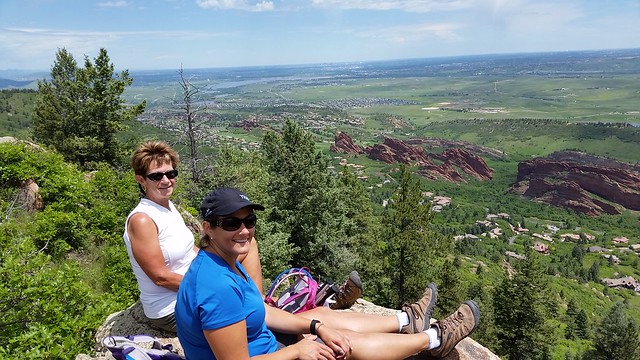 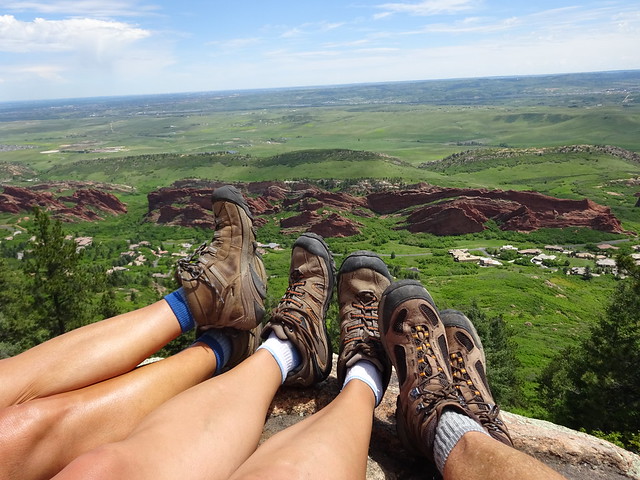 We took a break from hiking the next day and played tourist.  One stop on our tour was for a visit to the Hammond’s Candy Factory. 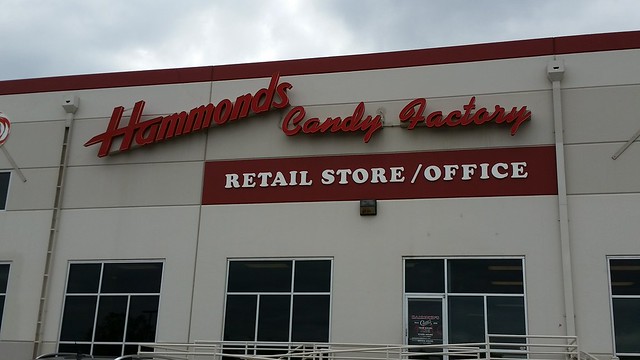 Located just east of I-25 north of central Denver, Hammond’s offers tours on the half hour. 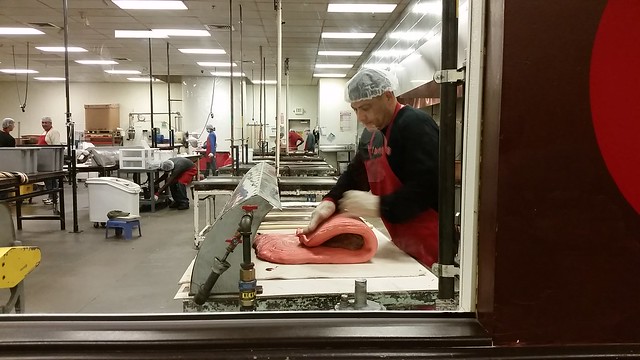 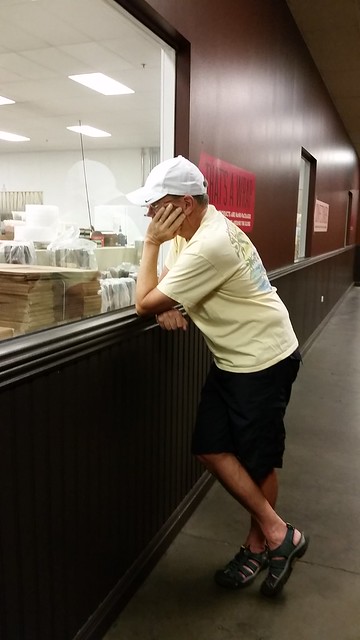 Everyone was thrilled by this tour!

On a more somber note, as educators we felt compelled to go to Columbine High School and pay our respects to the victims of the mass shooting that took place there in 1998.  On a hillside in Clement Park that overlooks the school there is a beautiful memorial to the thirteen students and one teacher who lost their lives in this senseless tragedy. 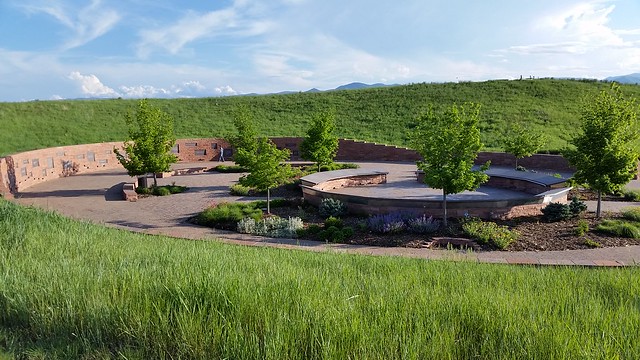 View of the memorial from the hillside 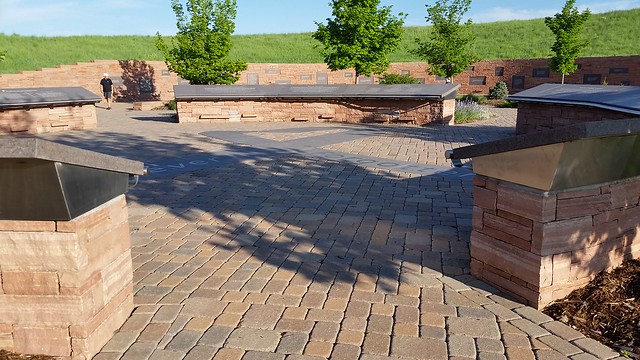 The last day of Jessica’s visit we headed back to Red Rocks Park to re-hike the seven mile loop on the Dakota Ridge and Red Rocks Trails.  We hiked this trail with friends Steve and MonaLiza previously and knew Jessica would enjoy it. 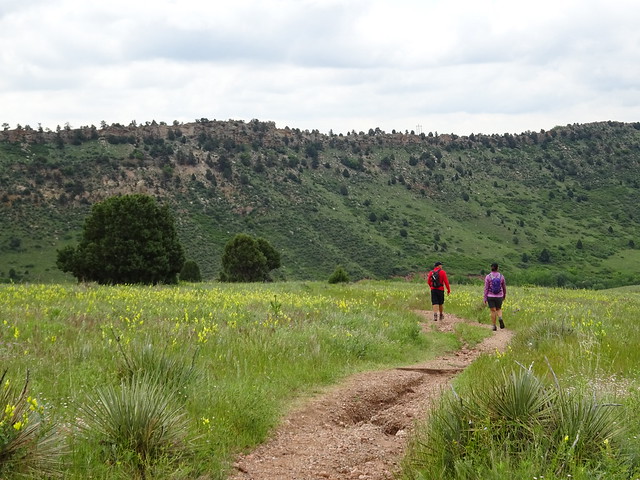 Heading toward the hogback of Dinosaur Ridge 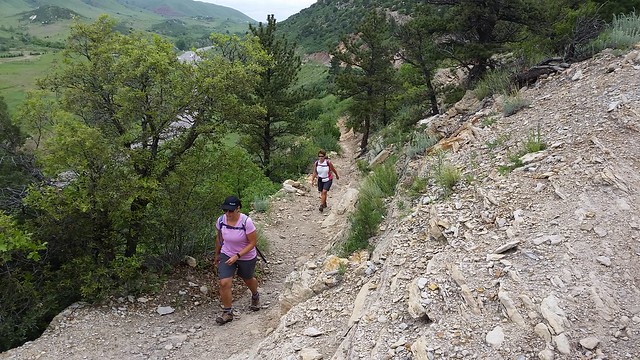 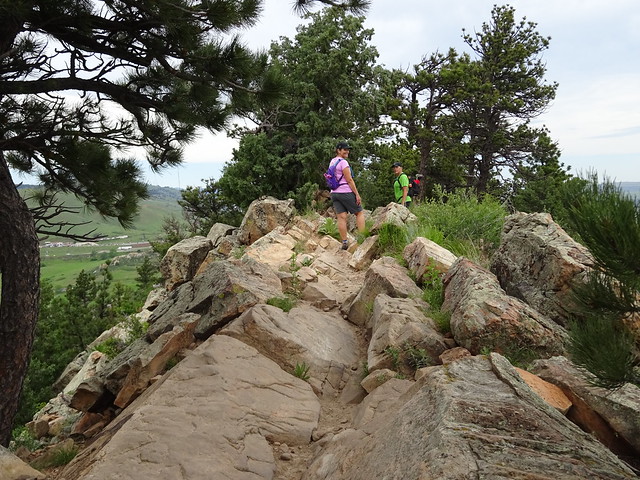 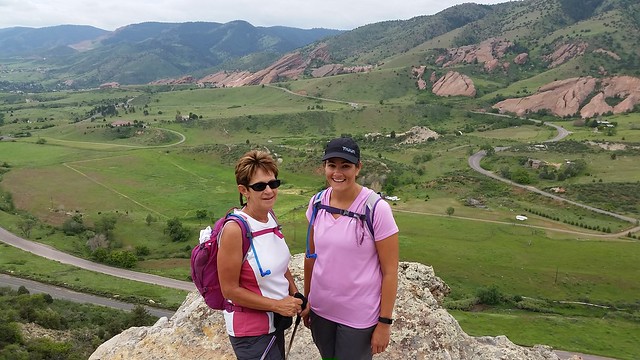 Beauty on the ridge!

On Wednesday Jessica had an early flight back to the east.  After dropping her off at the airport we returned to the motorhome, packed things up, and headed east on I-70.  Our long distance target is Atlanta for a visit with our son, Kevin, but we have a few places to visit along the way.