A Bit of Golf and a Visit to Rocky Mountain NP

With Dave and Sue nearby, a little golf was definitely on the agenda during our stay in the area.  The Denver area has numerous golf courses and one is very close to our RV park.  Broken Tee has a regulation course as well as a nine hole par three layout.  So we booked a tee time on the regulation course for Monday, which turned out to be a day of reduced greens fees. 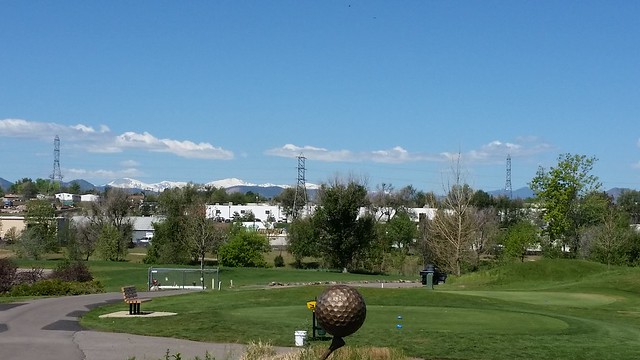 The first tee with a nice view of the mountains 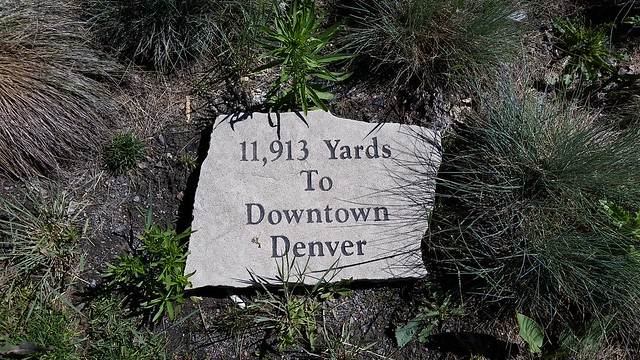 What’s the par for this hole? 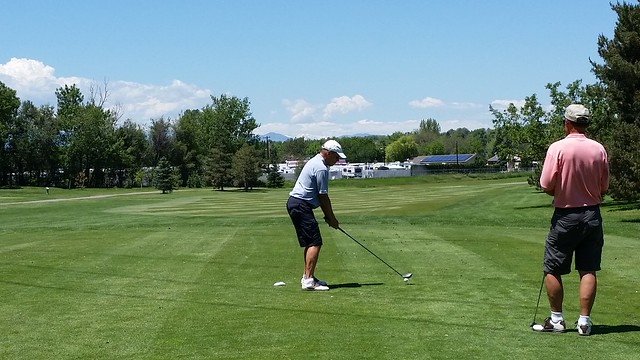 A good caddie is an asset! (thanks for the photo, Sue)

Crossing the South Platte River (thanks for the photo, Sue)

The next day we decided to take a long loop drive into the mountains and go up through Rocky Mountain National Park.  For the first part of the trip we drove west on I-70 to the Empire exit. 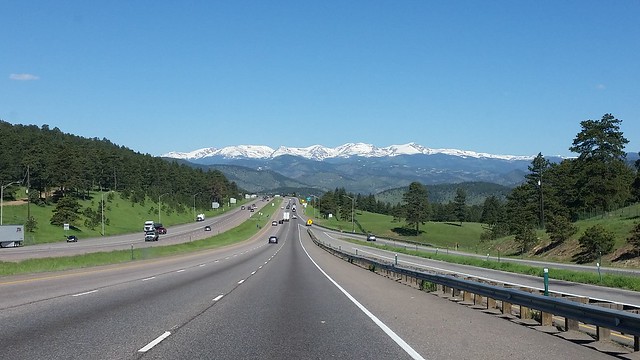 Looking west on I-70

Leaving the interstate, we drove north on Rte. 40, immediately gaining elevation as we drove over Berthoud Pass (11,000′). 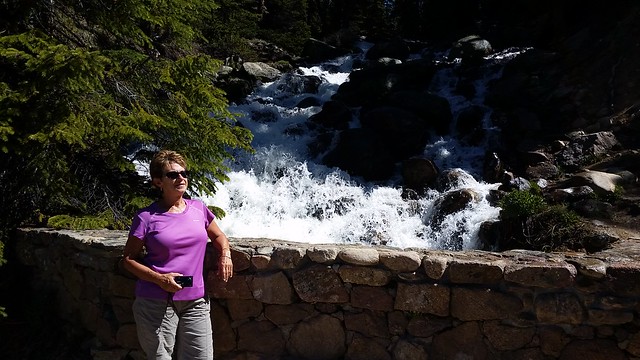 We passed one snowy hillside and saw two skiers coming down.  There was no lift so they must have hiked up the hill. 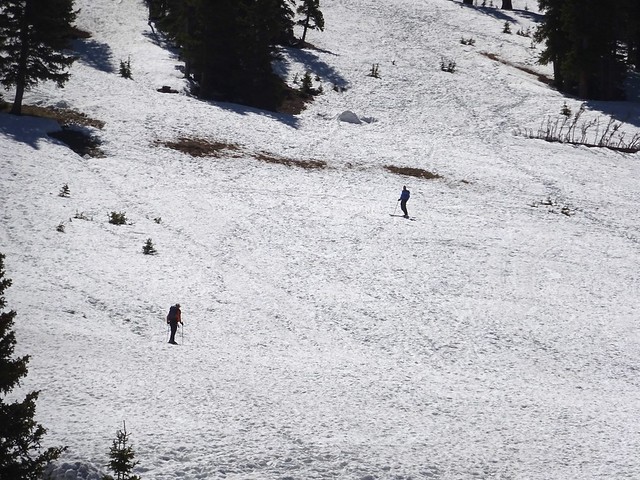 We continued north on Rte. 40 to Granby where we turned right on to Rte. 34.  Along Rte. 34 we passed by beautiful Lake Granby with the mountains of Rocky Mountain NP in the distance. 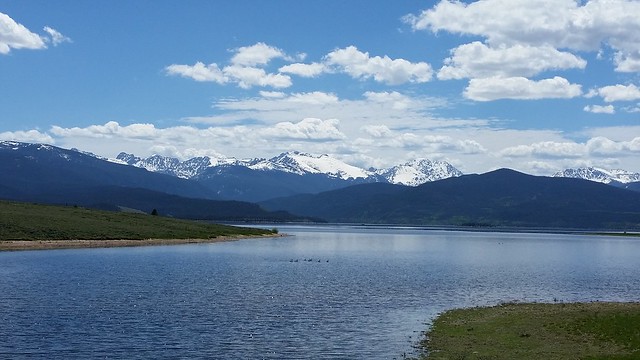 Just north of the town of Grand Lake we entered Rocky Mountain NP.  This road is a great spot to see moose, but we only spotted one foraging in the bushes. 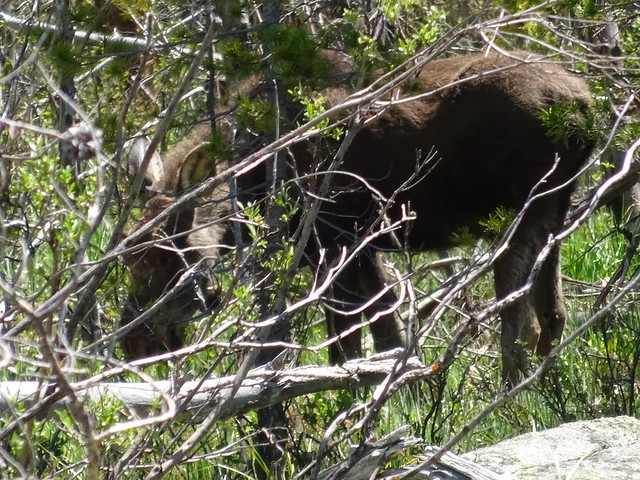 In the national park Rte. 34 is called Trail Ridge Road and is the highest continuous paved road in the U.S.  The road crosses the Continental Divide at Milner Pass (elev. 10,758 ‘) and reaches a maximum elevation of 12,183’. 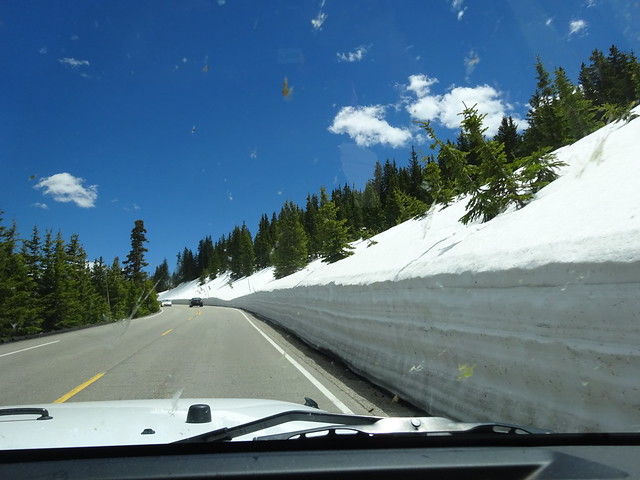 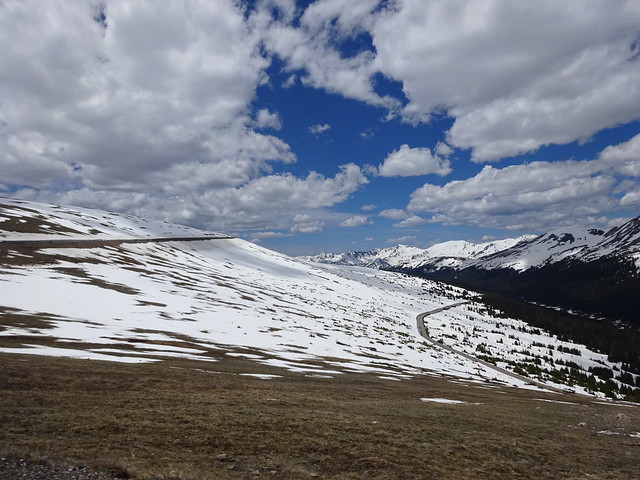 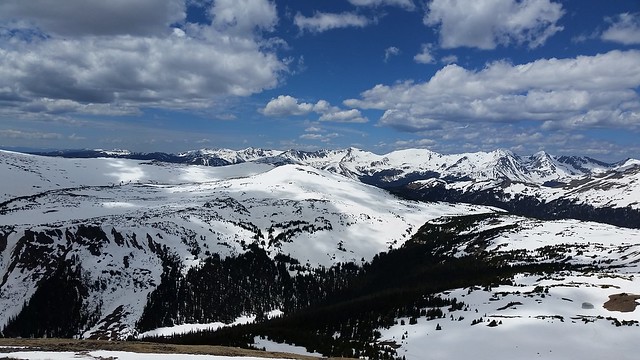 Views from the summit are spectacular!

After crossing the summit and descending back down to about 8,000′ we turned on to the Fall River Road at Deer Ridge Junction.  We went this way so we could go by Sheep Lakes, a wide meadow by a lake that is frequented by bighorn sheep.  The sheep are attracted by mineral deposits in the soil, which are essential in the growth of their horns.  Volunteers are stationed at a parking area to regulate traffic if any sheep attempt to cross the road.  We must have some sort of bighorn antenna, while we rarely can spot moose, we often see these magnificent animals.  As we arrived at the viewing area  a male and a female were grazing nearby. 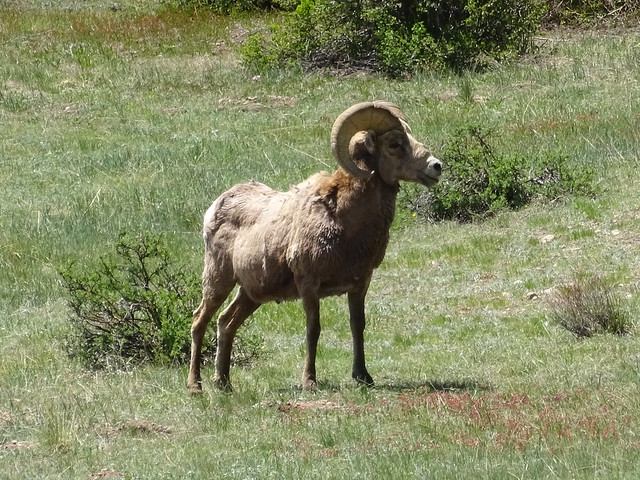 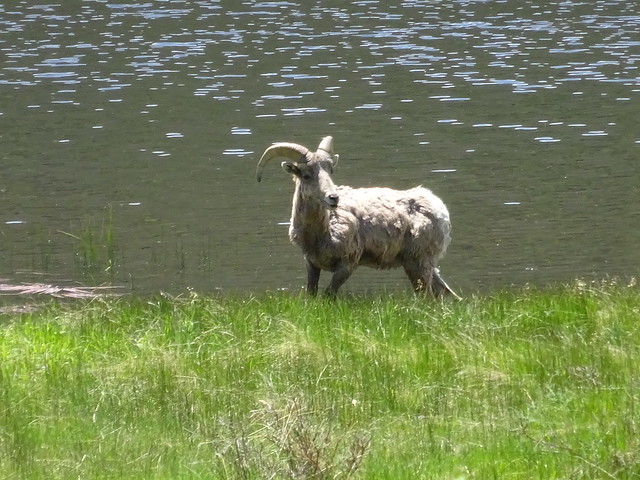 There were no other large animals in the meadow but the little fellow below kept a sharp eye out for any danger. 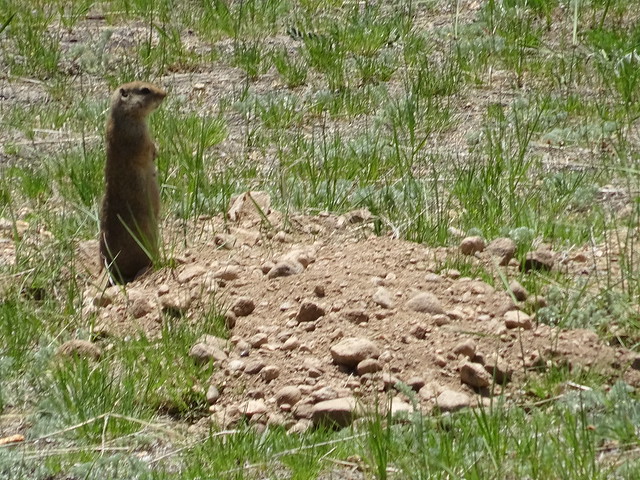 We continued down the road to the Fall River Visitor Center and inquired about any good hikes nearby.  The ranger recommended the Deer Mountain Trail, a six mile round-trip with a thousand feet of elevation gain.  He said we would have a beautiful view of almost 360 degrees from the summit.  So off we went, backtracking through Sheep Lakes to Deer Ridge Junction. 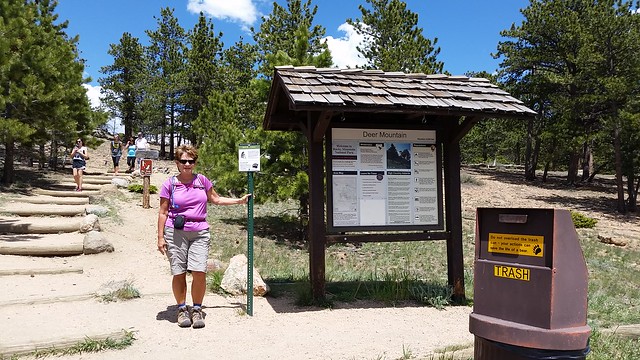 The trail began benignly through a pine forest, but we could see Deer Mountain at just over 10,000′ in front of us so we knew we would soon be going up. 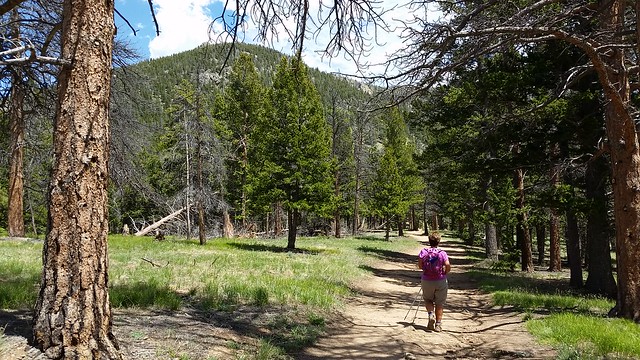 After about a tenth of a mile the trail began to gain elevation through a series of switchbacks.  In some sections the footing was very smooth, while in other areas it was quite rocky. 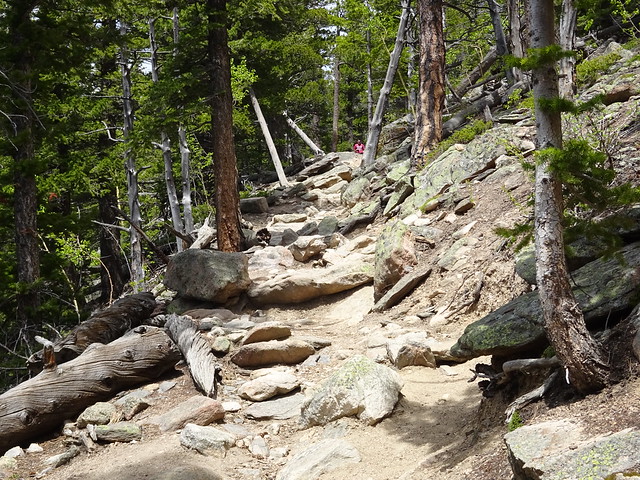 Where the trail went through open areas the views of snow covered mountains were beautiful. 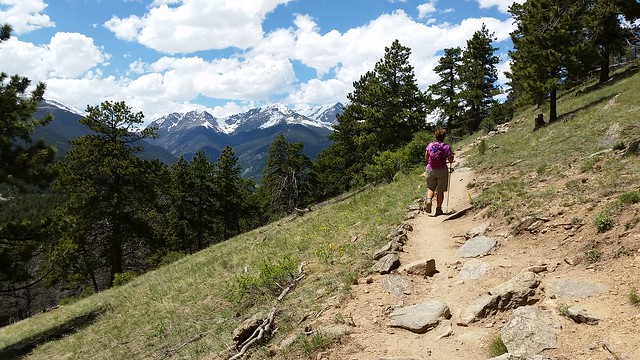 Once we reached the summit we sat for a while enjoying lunch while taking in the views all around us. 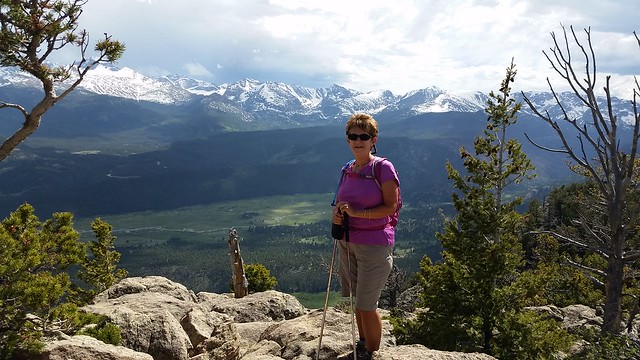 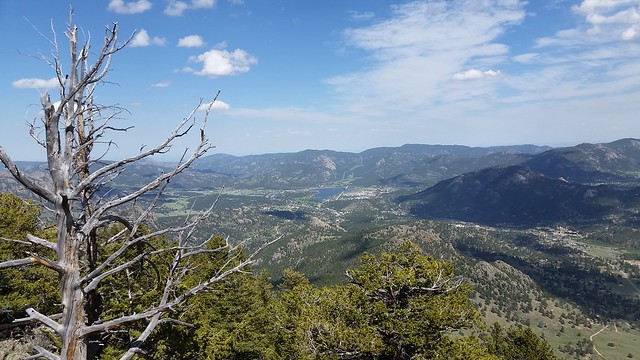 Estes Park is in the center of the photo

Storm clouds were building to the south so we didn’t stay long on the summit.  For most of the return hike the sun was shining on us, but as we approached the bottom, the skies darkened and a light rain urged us onward. 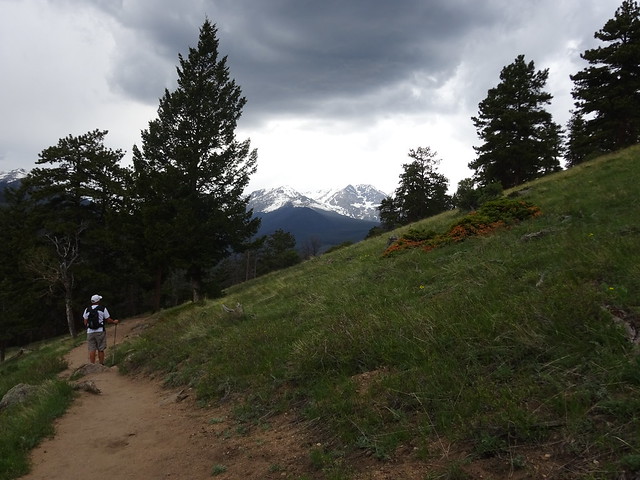 We hiked the last tenth of a mile in a fairly steady rain, but got in the Jeep just as the heavy stuff began.  Driving in to nearby Estes Park, untouched by the nearby rain, we stopped at one of our favorite coffee shops.  We enjoy this location because the outdoor seating is right along the Big Thompson River. 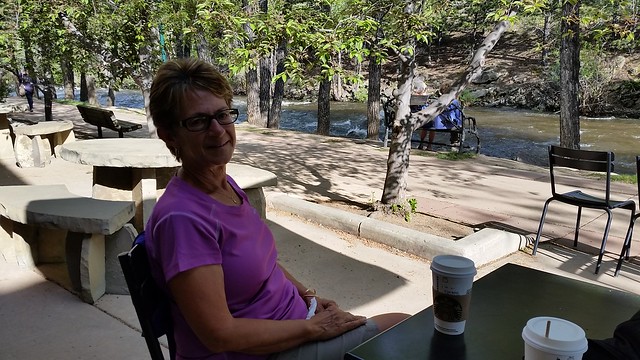 As we drove south toward Denver we could see large storm clouds on the prairie to the east.  At one point a weird half rainbow ran from the clouds to the ground. 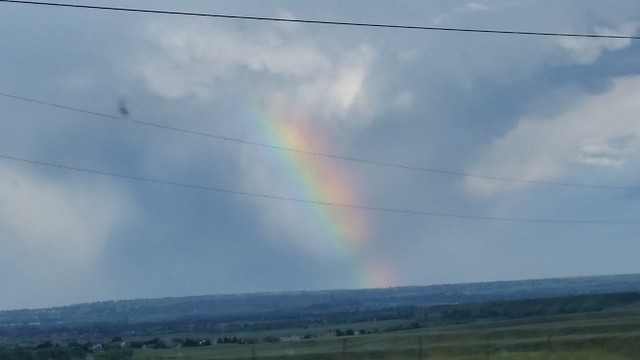 While a bit long (about 250 miles), this loop drive provides outstanding scenery.  Throw in a six mile hike with significant elevation gain and you have a great adventure!