Seeing the Sights in the Denver Area

While in the Denver area we have taken the opportunity to do some sight-seeing.  Twice we joined fellow RVers on visits to local attractions.  Both couples (Sue and Dave, as well as, MonaLiza And Steve) are staying in a park in Golden and one day invited us to join them on a visit to the nearby Coors Brewery.  Also joining the group was Dave and Sue’s son, Jesse, who lives in nearby Boulder and recently completed a graduate program at the University of Colorado. 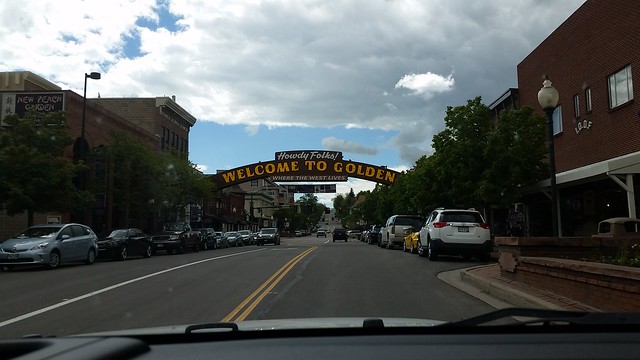 The tour begins in a visitors parking area where you board a shuttle bus that takes you to the tour entrance.  But first the bus takes you on a quick trip through downtown Golden, with the driver providing a brief history of the town. 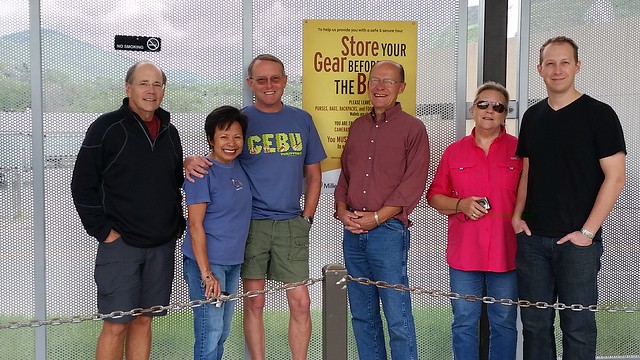 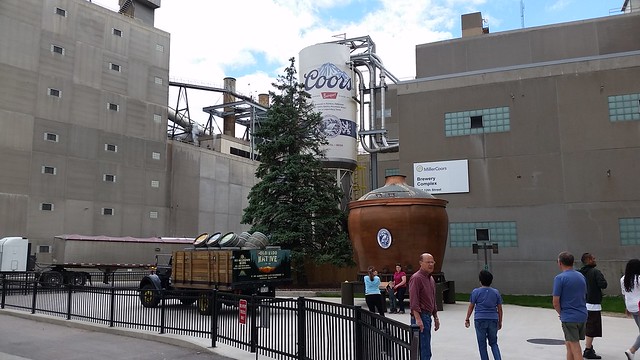 The tour is self-guided and each visitor is given an individual auditory player.  Each station along the tour is identified by a number.  Press the corresponding number on your device and you hear information about that step in the process. 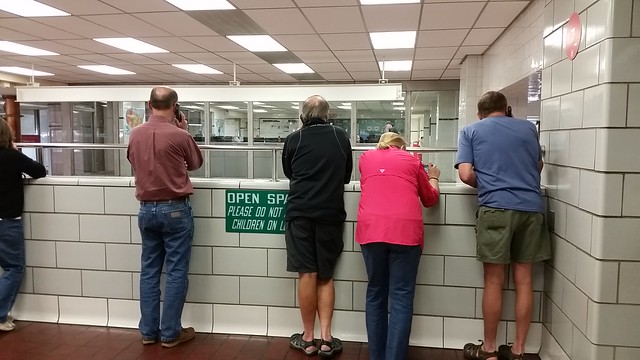 At the end of the tour each visitor of legal age is entitled to three glasses of the Coors of your choice.  Three glasses seemed a bit much for the group (especially for those driving) so one was our limit. 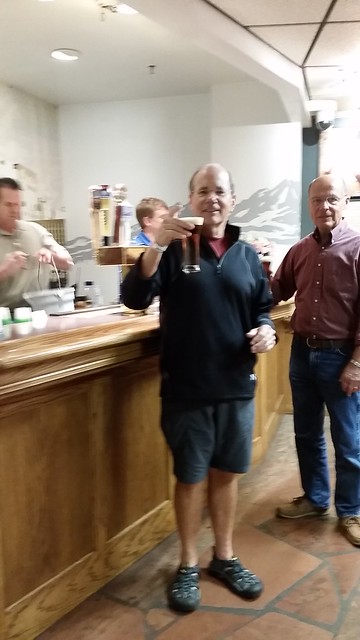 Later in the week we were again invited to join the group for a visit to NCAR in Boulder (more on that later).  On the way we stopped back at Red Rocks Park to check out the amphitheater. 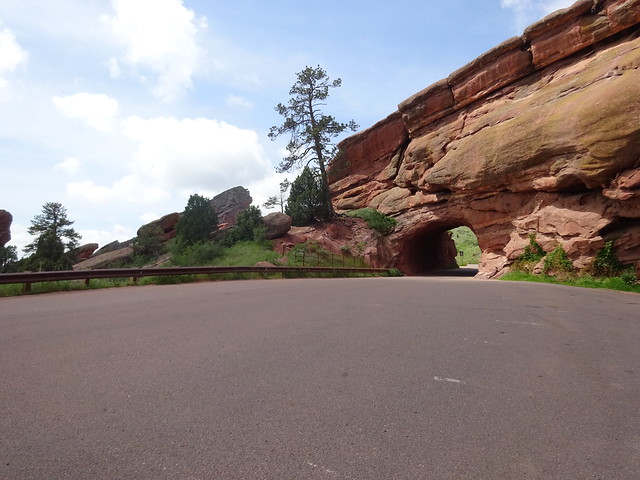 The amphitheater at Red Rocks was built by the CCC and completed in 1941.  With a seating capacity of 9,450 the open air venue has near perfect acoustics.  A long list of famous musicians, including the Beatles in 1964, have performed here.  The site is open to the public each morning and is utilized by a large number of people as an exercise facility.  The group below was working its way up the seating area completing a variety of exercises along the way. 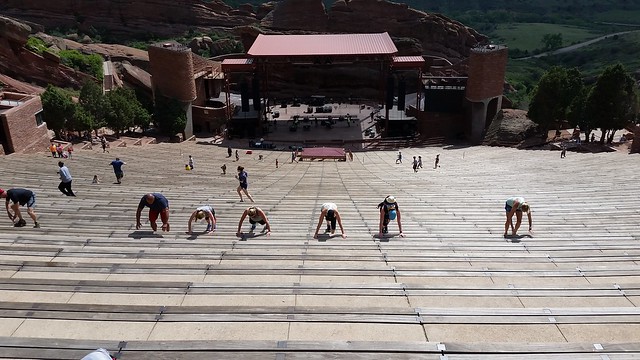 Tired arms do some push-ups 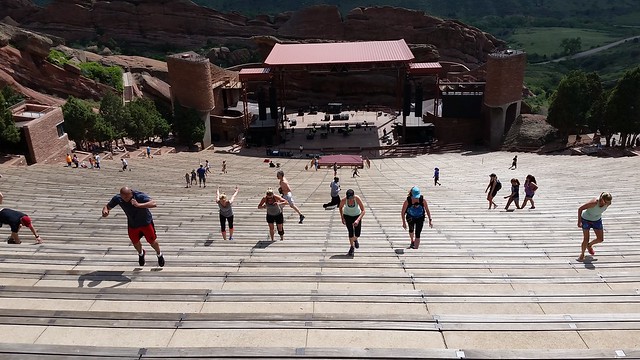 Can you spot the leader of the group?

After our quick stop at Red Rocks Park we continued up the road to the city of Boulder where we met Sue, Dave, MonaLiza, and Steve in the parking lot of the Mesa Laboratory of the National Center for Atmospheric Research (NCAR).  NCAR is a research center funded by the National Science Foundation.  Studies include meteorology, climate science, atmospheric chemistry, solar-terrestrial interactions, environmental and societal impacts.

The Mesa Laboratory complex was designed by architect I. M. Pei in 1961 as his first project outside of city building design.  It has been noted for its Anasazi-inspired architecture and use of bush-hammered concrete to blend into the surrounding area. 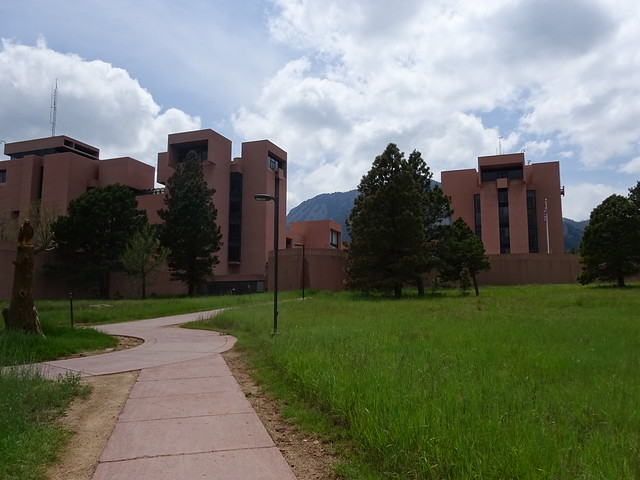 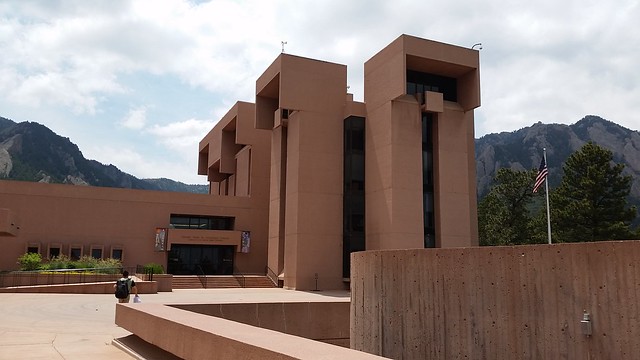 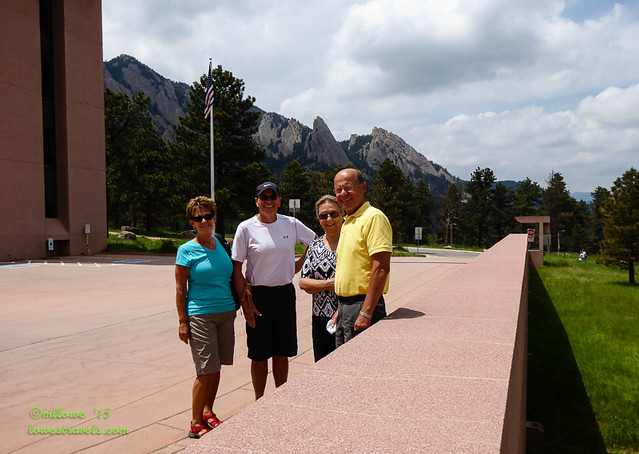 The Visitors Center at the Mesa Laboratory is open to the public daily at no charge.  There are many displays, some interactive, related to the various atmospheric studies of NCAR. 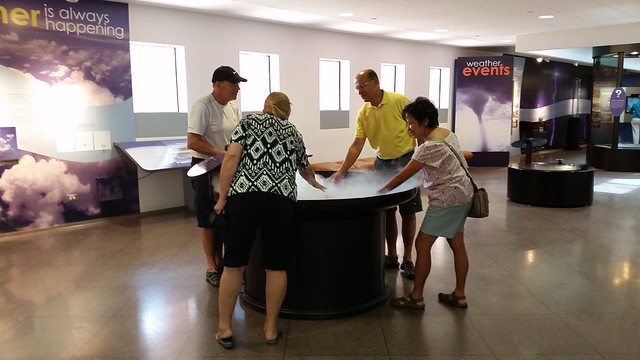 The children playing in a cloud 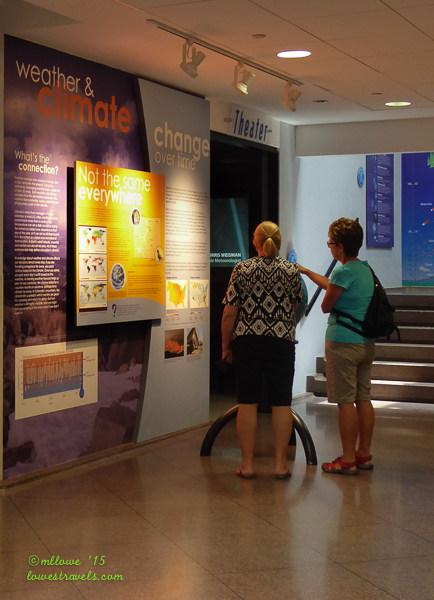 Each day at noon one of the staff leads a tour of the Visitors Center.  We arrived just before the tour began and enjoyed an interesting and informative presentation. 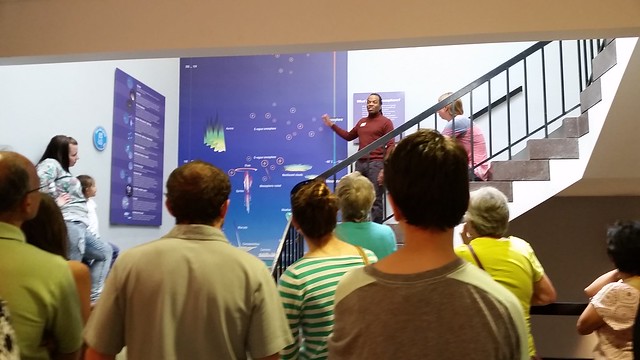 One of the displays has a diorama of the facility and information on its designer, I.M. Pei.  The display is in a room with a beautiful view of the mountains to the west. 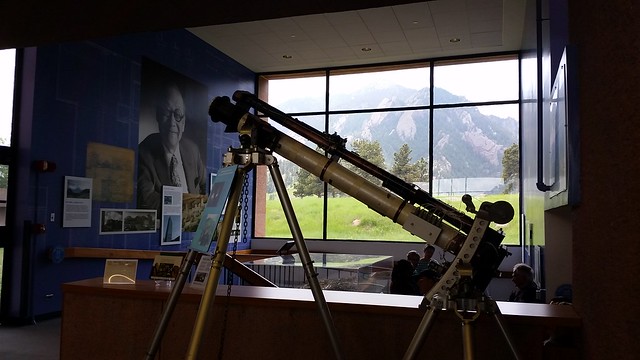 Following our tour, the group adjourned for a late lunch in downtown Boulder.  We arrived at The Bohemian Biergarten a half hour before they opened so we spent some time exploring the nearby shops.  The wait was well worth it, as the food and drink were both excellent. 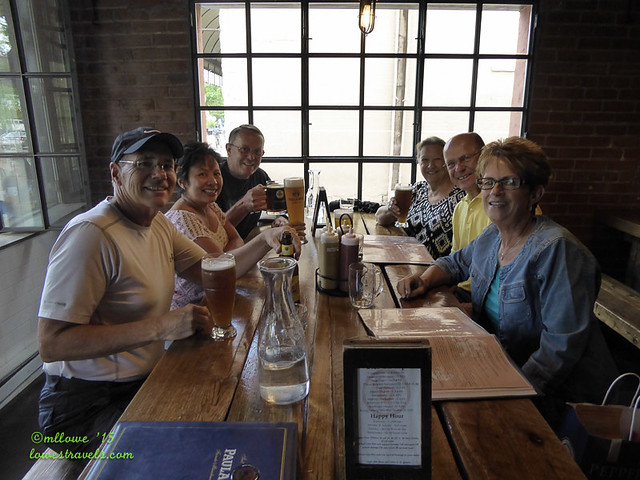 One of the nice things about the Denver area is that there are numerous bike paths throughout the city.  One of the paths runs right by our RV park and connects with another trail leading to downtown Denver, about ten miles to the north.  So one afternoon when it looked like the daily thunderstorms might hold off until late in the day we put some air in our tires and headed out.  The trail runs right along the South Platte River as it heads north of the city. 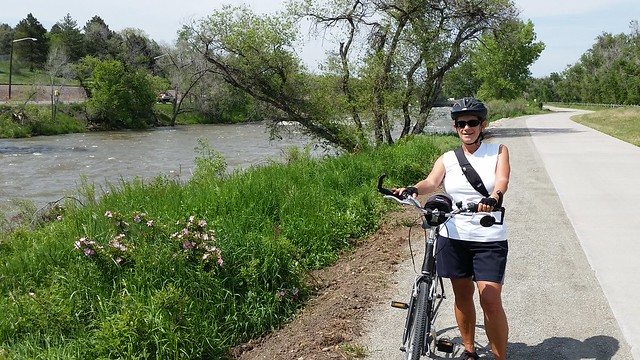 Due to all the rain in the area the past month there are a number of spots where the trail literally runs through the river! 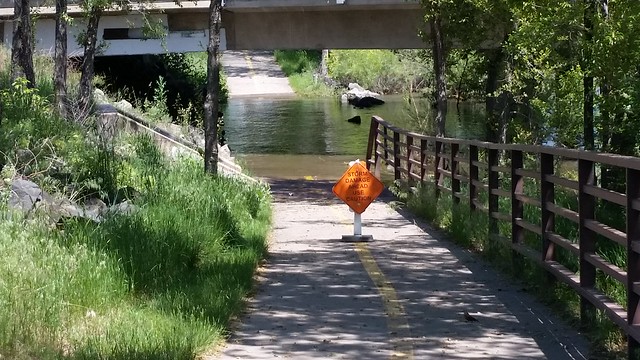 As we approached the center city the trail went right by Sports Authority Field, home of the Broncos. 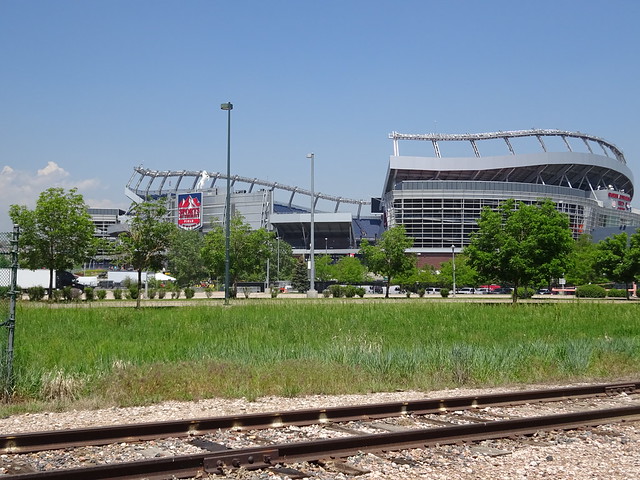 Just north of the football stadium we crossed the Platte River and rode into the center of Denver for a visit to the 16th Street Mall.  The 16th Street Mall is a pedestrian and transit mall that runs along 16th Street for 1.25 miles.  It is home to over 300 locally owned/chain stores and over 50 restaurants.

One of 16th Street’s most distinctive buildings is the D&F Tower (Daniels & Fisher).  When it was completed in 1910, this was the highest building west of the Mississippi River. It is modeled after The Campanile (St. Mark’s Bell Tower) at the Piazza San Marco in Venice and its four clocks (one for each side) are 16 feet high. 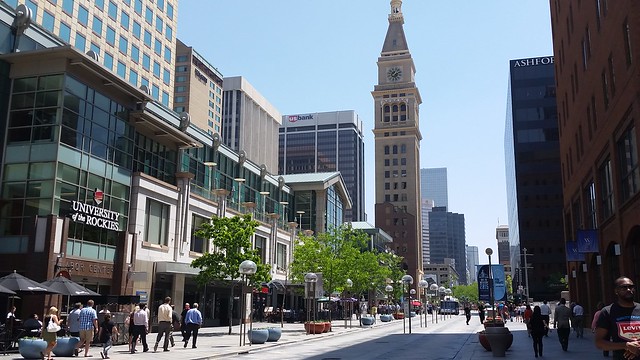 Another feature of the mall is the upright pianos located at various locations.  The “Your Keys to the City” program places 10 pianos along the sidewalks of the mall for public use from May 1st until September 30th.  Piano players, or anyone really, can use the pianos during the day between 8 a.m .and 10 p.m,, before they are covered. The pianos as are also covered during inclement weather.  The pianos are painted with inspirations from artists such as Vincent Van Gogh and also with some local landmarks such as Coors Field and the Rocky Mountains. 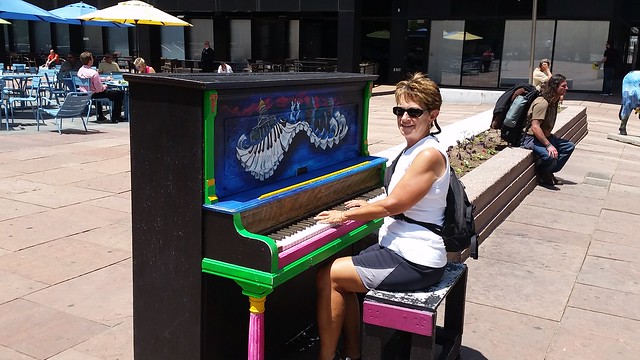 A local showgirl entertains the masses one afternoon

As we re-crossed the South Platte River on the return ride, we made a stop at what may be our favorite store in the whole world. 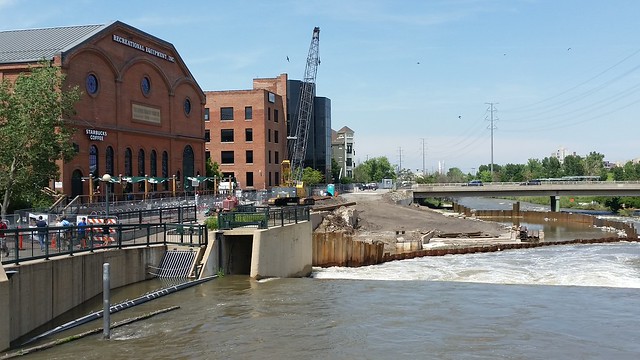 Can’t read the name of the store in the photo above?  Let’s zoom in a bit for a better look. 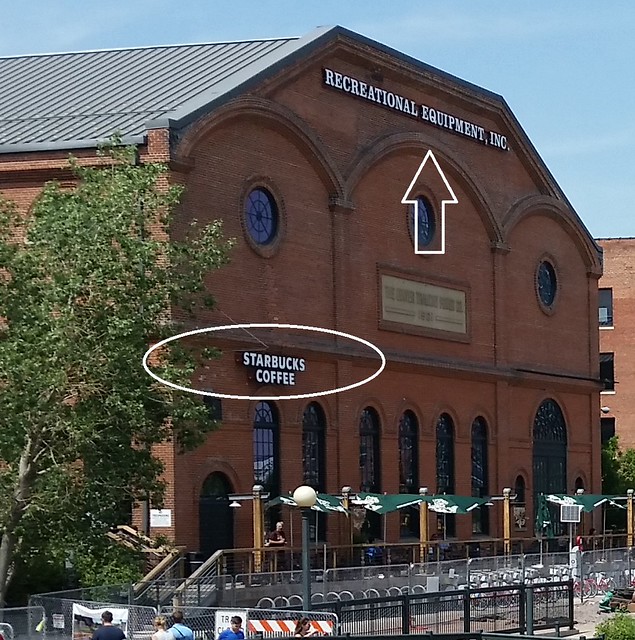 The arrow points to the name of the main business in this building, Recreational Equipment Inc., or REI.   This is a great store for hiking and biking equipment and has locations all over the country.  The Denver store is the largest one we have visited in our travel.  Now, to make this building even more exciting, the oval is around the location of that little chain of coffee shops from Seattle.  An REI and a Starbucks in the same building!  Life doesn’t get any better!

26 Responses to Seeing the Sights in the Denver Area