During their recent stay in the Denver area our friends, Hans and Lisa, did a great loop hike that began/ended in Red Rocks Park.  The park is the home of the famous amphitheater nestled within the red rocks.  While world-class musicians perform under the stars in the evenings, during the day miles of trails are open to hikers and mountain bikers.

Early one morning we met Steve and MonaLiza in one of the large parking areas and set out to do a seven mile loop beginning on the Red Rocks Trail.  Our plan was to follow the trail Hans and Lisa described using Red Rocks Trail, Dakota Ridge, Village Walk, Morrison Slide, then back to Red Rocks Trail. 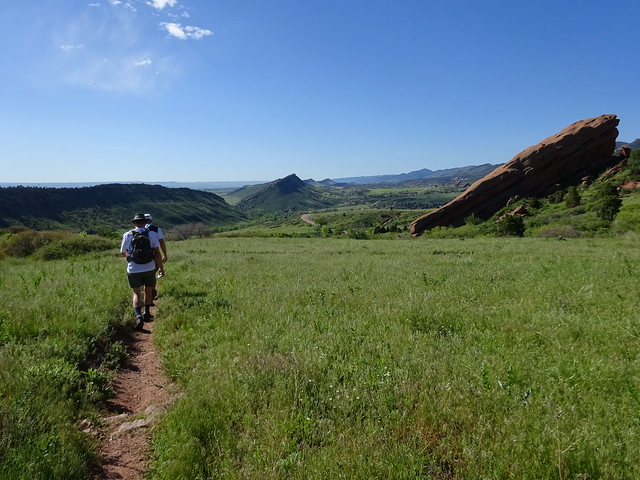 The trail begins through a flat grassland area

The high point (literally the highest point) of the hike was the Dakota Ridge, also known as the Dakota Hogsback.  This ridge of Dakota Sandstone creates a natural barrier between the foothills of the Rocky Mountains and the plains to the east. 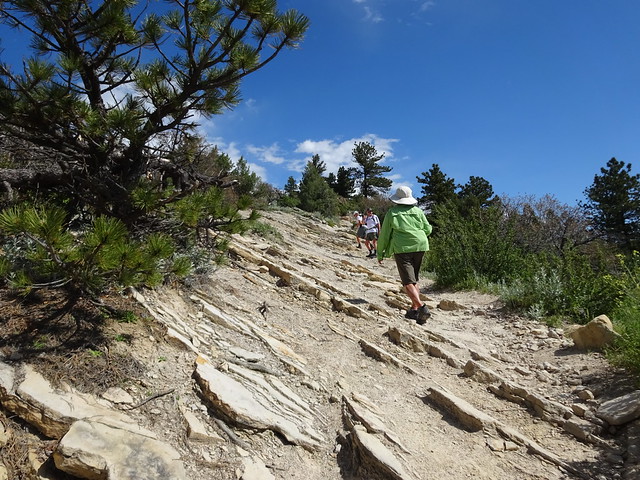 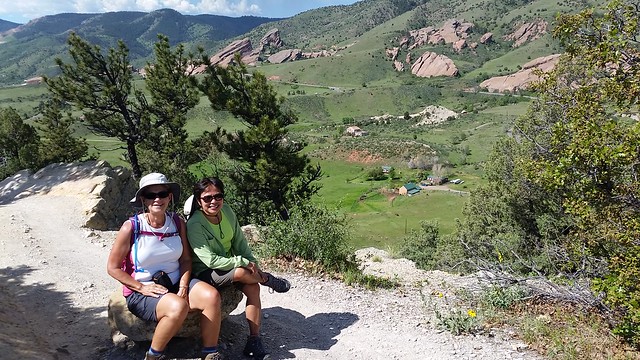 Beautiful view on the ridge

Look at the photo above.  See the red rock formation above the ladies?  That is the location of the Red Rock Amphitheater.  A zoom shot below shows the seating area. 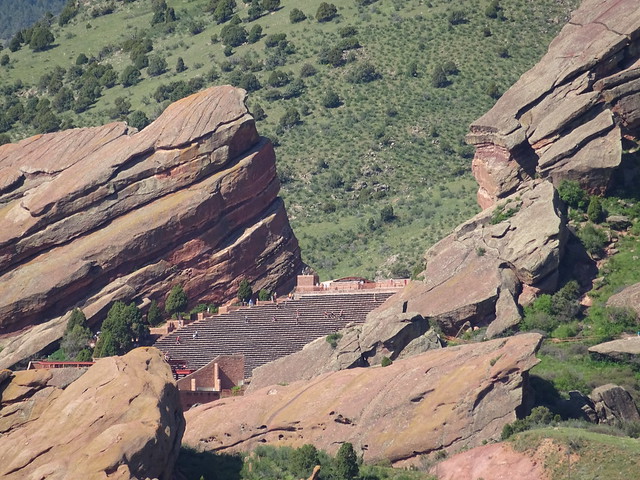 As we hiked along the Hogsback, we stopped for a snack and a group photo.

Looking down over the edge, Hawkeye Steve spotted a pair of antlers and two eyes peering back at him. 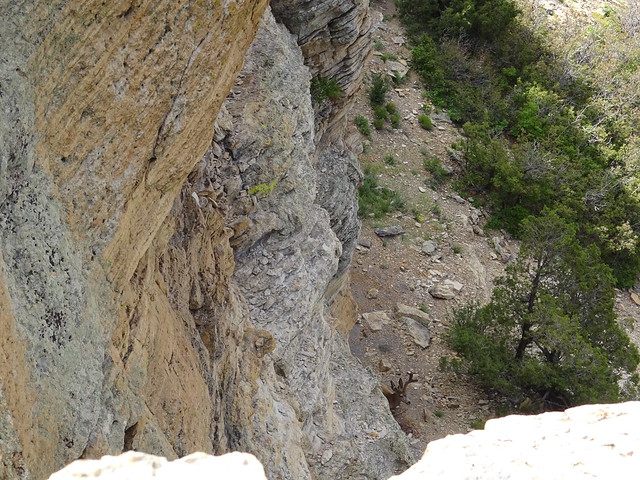 The little guy below had found himself a nice quiet spot in the shade for the day! 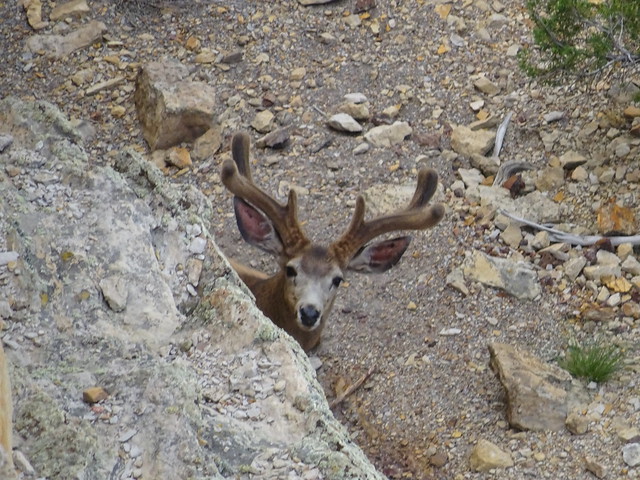 Looking back behind us you can see the road (CO-93) with the Hogsback on the left and Red Rocks Amphitheater on the right. 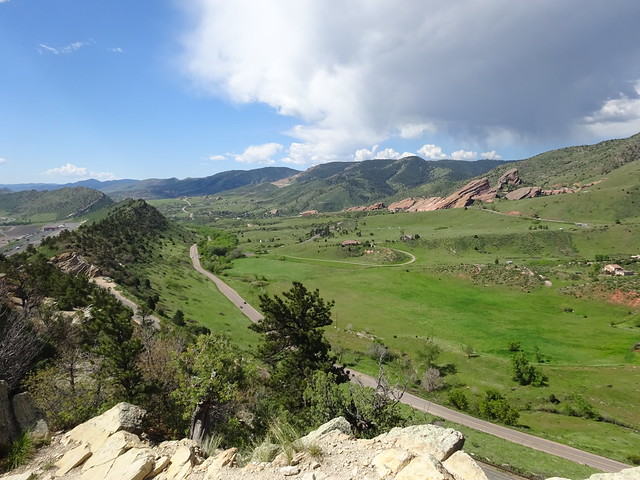 As we hiked the Hogsback the girls suddenly began to kiss a pine tree!  OK, they were just enjoying the butterscotch (or vanilla to some) smell of a Ponderosa Pine (bet you never saw Hoss doing this on the ranch!) 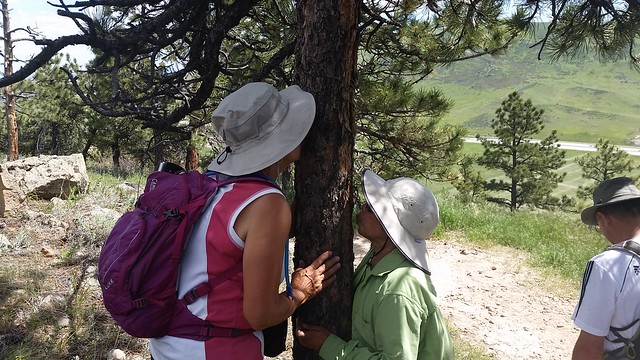 This trail is also a very popular route for mountain bikers.  Log ramps are built into steep areas of the trail to help them riding in either direction. 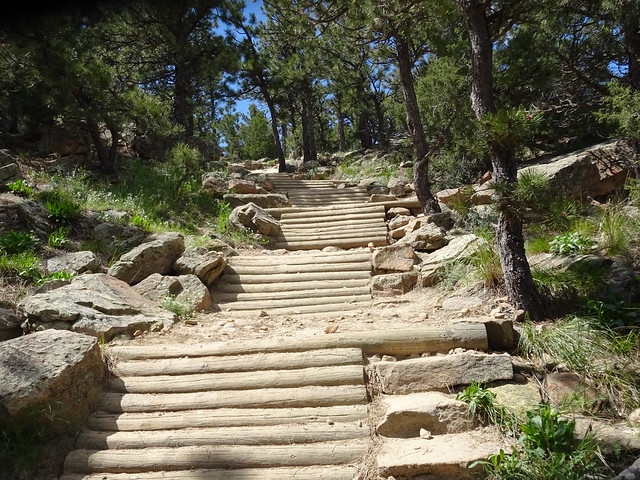 At the north end of the Hogsback, the Dakota Ridge Trail descends down to a point where you have to cross the highway (CO-93) again.  You then enter Matthew/Winters Park for the return hike. 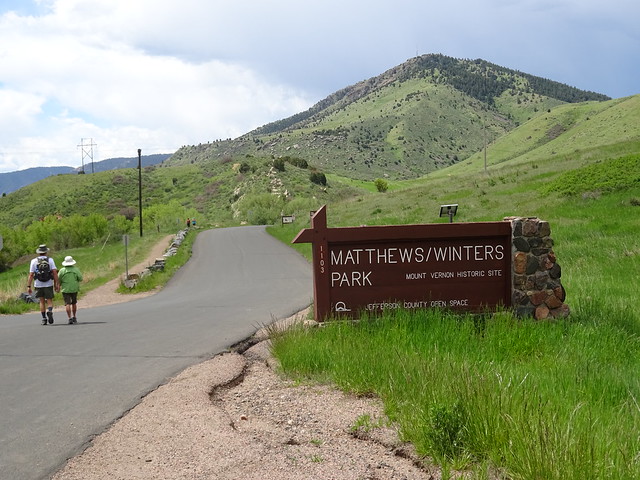 At Matthews/Winters we picked up the Village Walk Trail as it wandered across a grassy area. 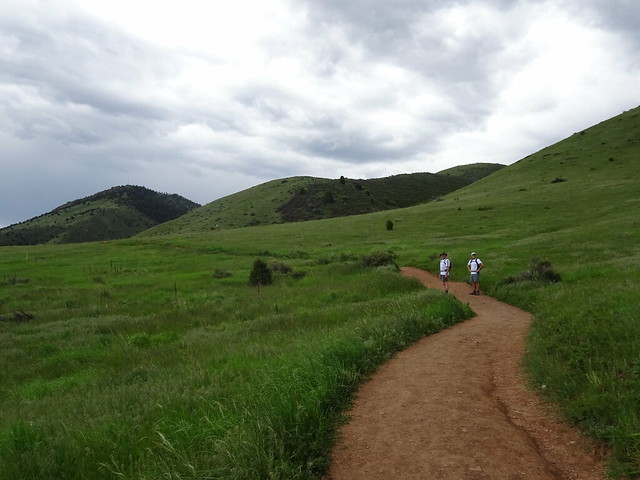 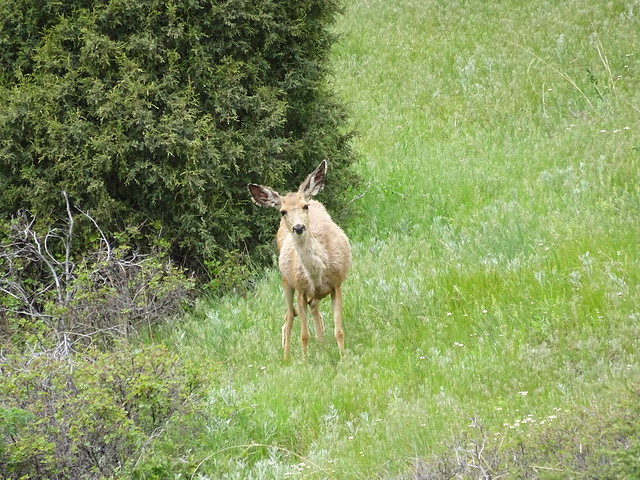 A bit of wildlife along the Red Rock Trail 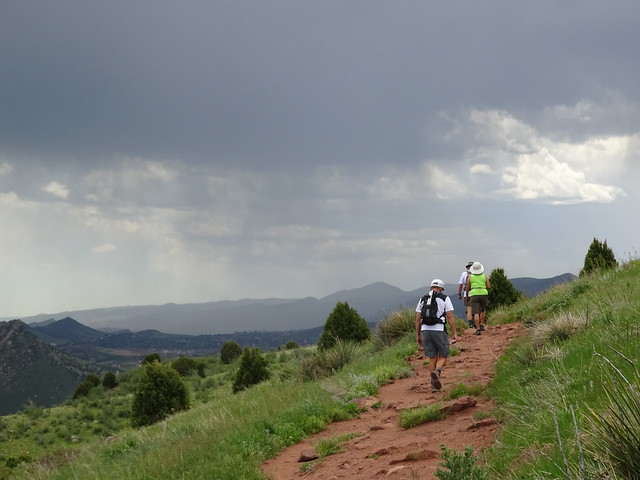 Thunderstorms all around us on the return trail

We returned to the parking area just in time to avoid some rain.  We planned to go up the hill and visit the amphitheater but the thunder chased us away.  We’ll save that visit for another day.

OK, we did have a little excitement on the trail.  Pam has frequently fallen while hiking, hence the moniker “nimble hiker.”  She was excited (and completely un-sympathetic) when John finally took a tumble on the Red Rock Trail.  He thought she might have pushed him, but she was behind Steve so apparently gravity is the culprit. 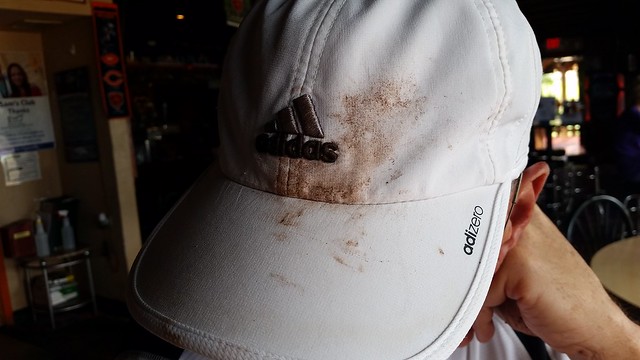 An example of using your head!

Other than a skinned knee, a cut on the hand, and dirt on his shirt and hat, he survived with no lingering physical injuries other than a bruised ego!