About ten mile south of Geneseo is Letchworth State Park.  Since we are always looking for a good place to do some hiking wherever we go the park beckoned to us, so off we went on a sunny Friday afternoon for a little walk in the woods.

The park is named after William Pryor Letchworth (1823-1910), an industrialist from Buffalo who in 1906 bequeathed the 1,000-acre estate that forms the heart of the park to New York State.  The park is roughly 17 miles long, covering 14,350 acres of land along the Genesee River as it flows north into Lake Ontario.

Within the park, there are three large waterfalls on the Genesee River and as many as fifty waterfalls found on tributaries that flow into it.  The gorge formed by the river, with rock walls rising up to 550 feet in places and which narrows to 400 feet across above the middle of the three falls, prompted the area’s reputation as the “Grand Canyon of the East.”

At the north end of the park is the Mount Morris Dam.  Completed in 1954, the Mt. Morris Dam is the largest flood control device of its kind (concrete gravity) east of the Mississippi River. It is 1,028 feet in length and rises 230 feet  from the riverbed.  When you first see the dam it looks a bit strange, as there is no water  behind it.  The dam is only used for flood control and proved its worth during the Hurricane Agnes in 1972, saving thousands of acres of farmland from flooding. 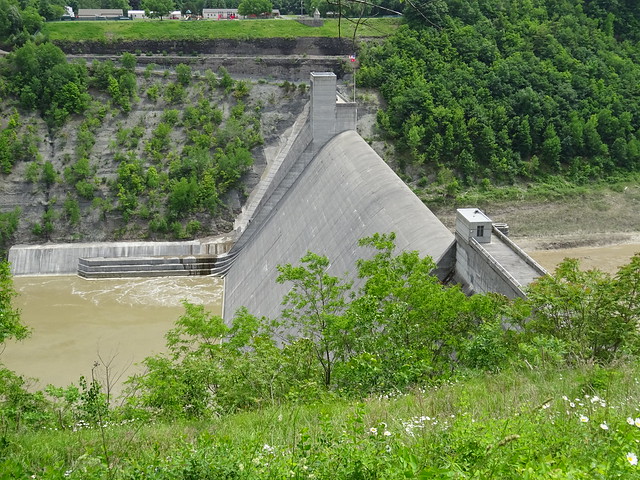 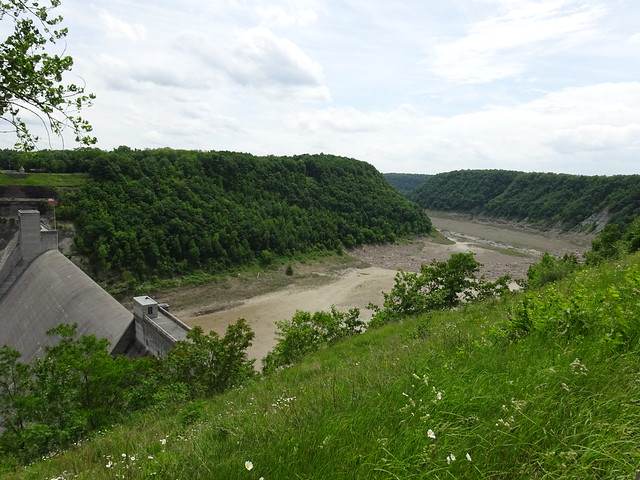 OK, who pulled the plug and let the water out?

We parked at the south end of the park at the trailhead for Trail 1, The Gorge Trail, which winds along the river with views of the three falls on the Genessee River.  The trail begins by going down a long, winding set of stairs.  We never like hiking “down” at the beginning of a hike as we then know what will happen on the return trip! 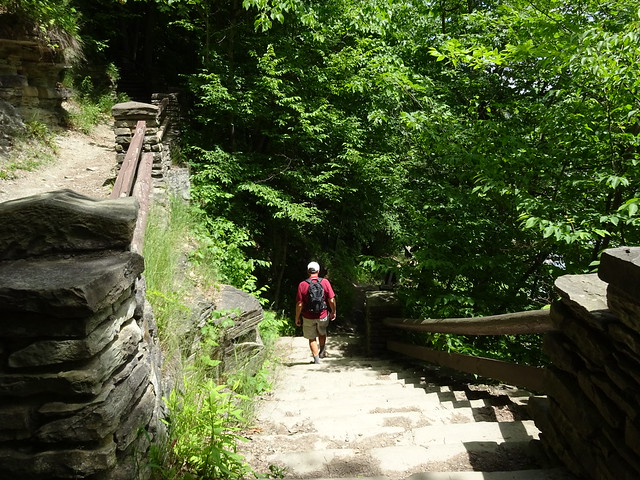 Toward the bottom of the stairs the path crossed one of many small waterfalls created by streams making their way to the river. 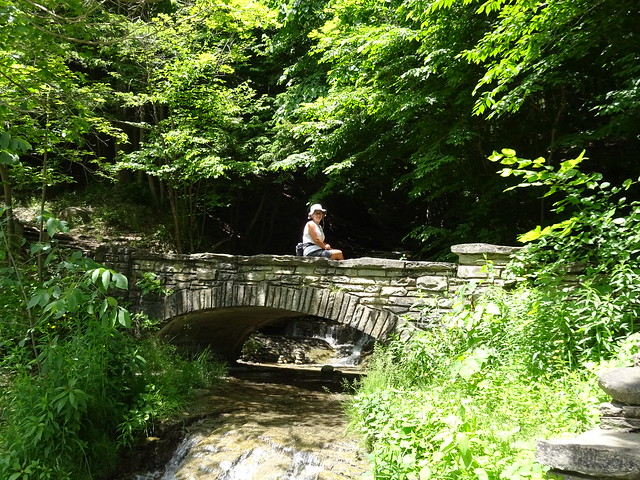 Looking back at Upper Falls you get a nice view of the Portage Railroad Bridge. 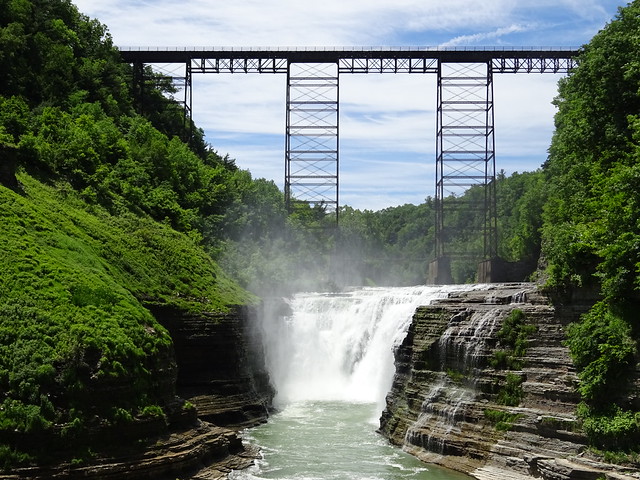 Upper Falls with the Portage Bridge above

In 1852 the Erie Railroad Company built a wooden trestle bridge over the river.  At the time, it was the longest and tallest wooden bridge in the world.  In 1875 the great wooden railroad bridge was destroyed in a tremendous fire. The bridge was a total loss, leaving only the concrete bridge abutments.

Immediately after the fire, officials of the Erie Railroad Company moved quickly to replace the wooden bridge with an iron and steel design.  Construction began June 8, 1875 and opened for traffic July 31, 1875. The bridge is 820 feet long and 240 feet high.  It is still in use today.

We hiked about a mile further downstream before coming upon the upper part of the Middle Falls. 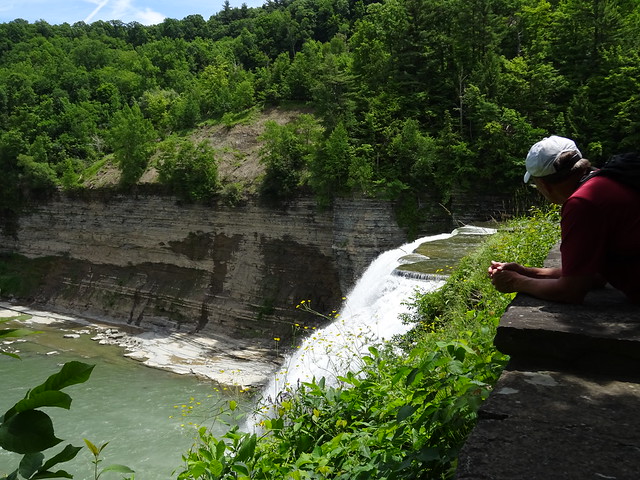 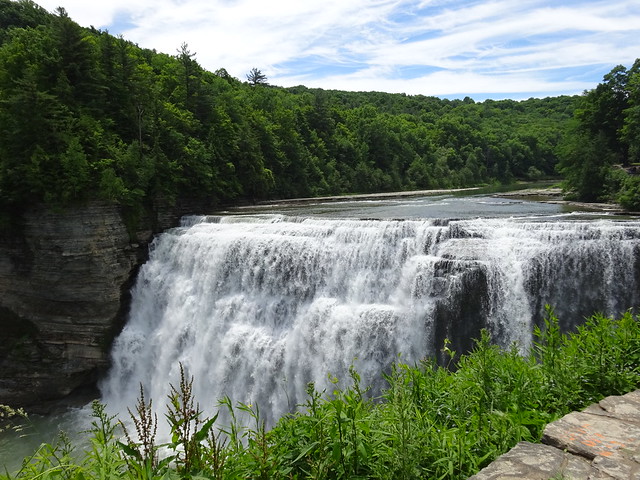 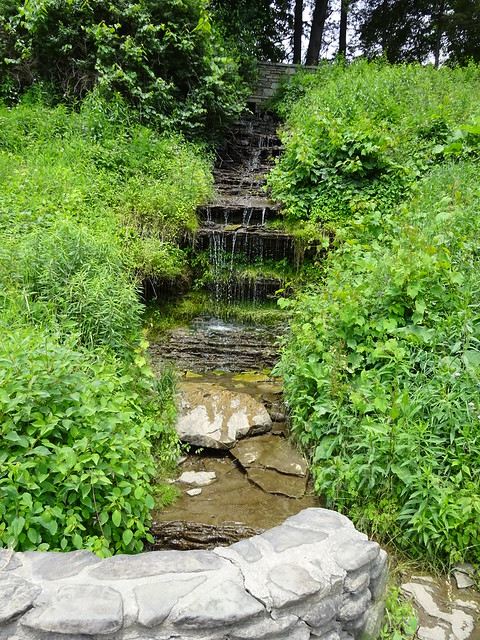 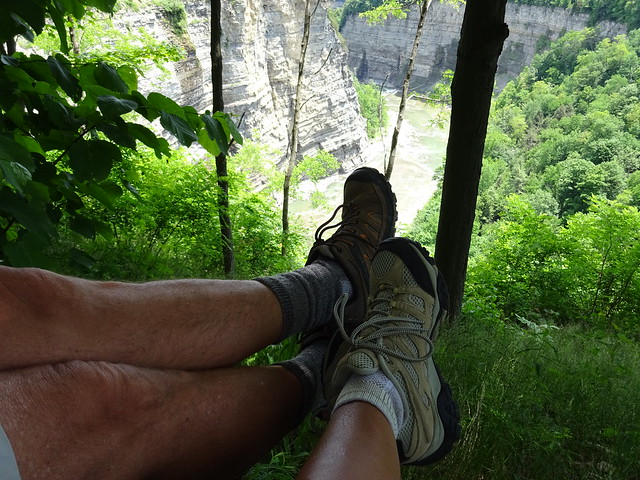 Its been a while since we had “Lunch with a View” 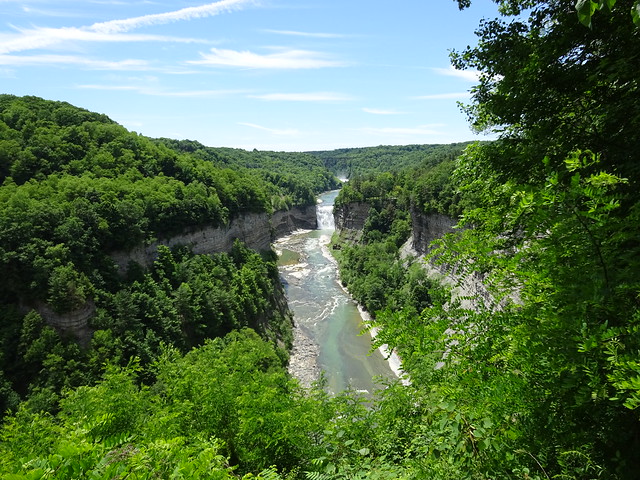 Looking back north toward Middle and Upper Falls 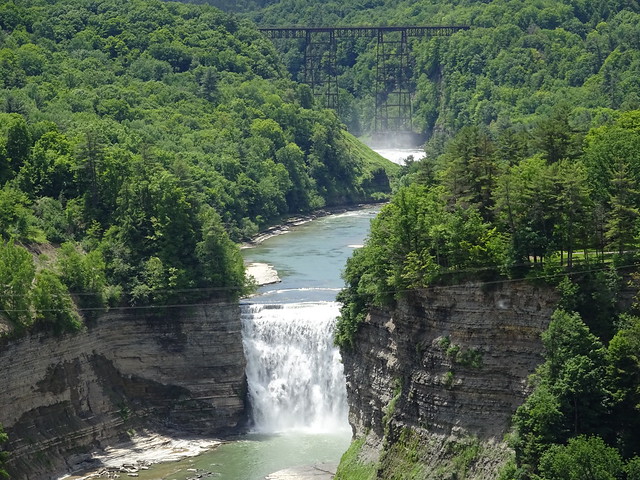 A zoom of the picture above 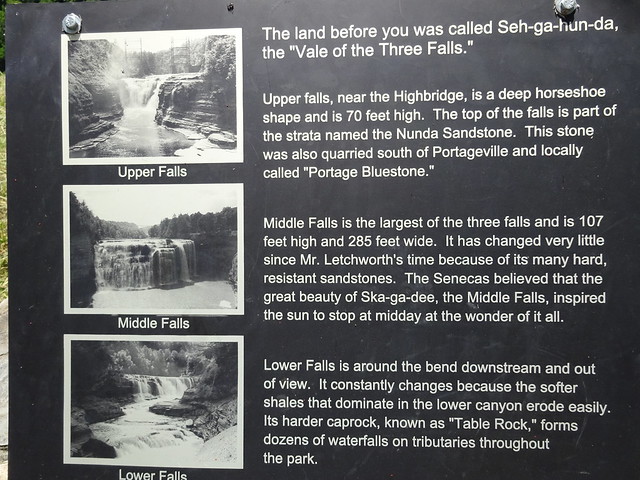 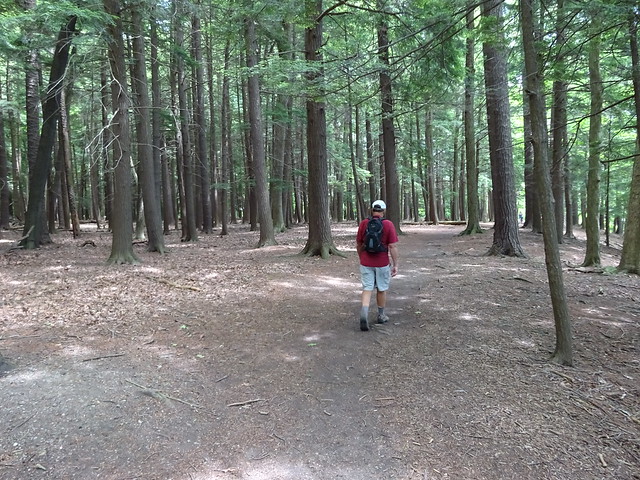 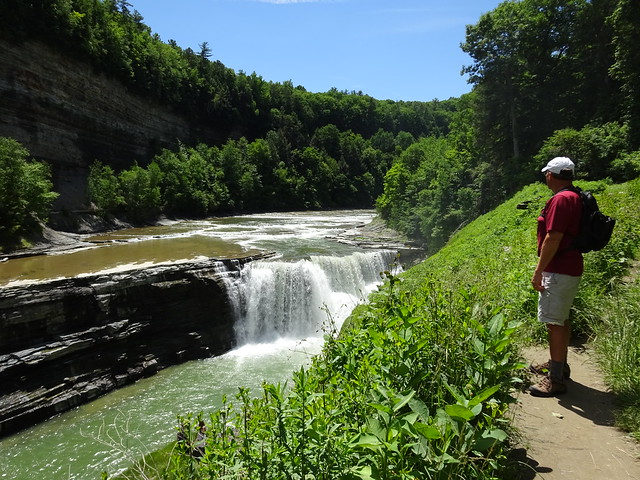 There is only one point where a trail crosses the Genesee River, over a beautiful stone bridge just below Lower Falls.  We hiked down to the bridge, where we turned around for the return hike. 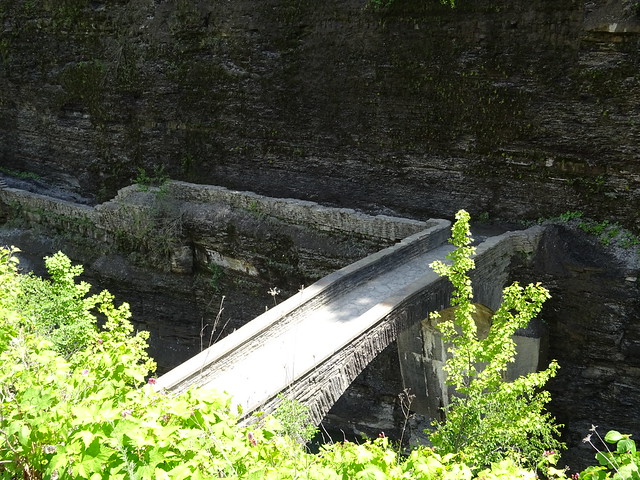 Stone bridge over the Genesee River 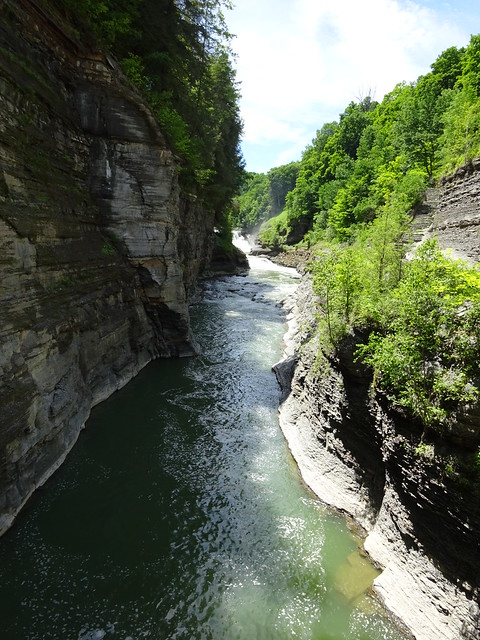 Looking north from the bridge 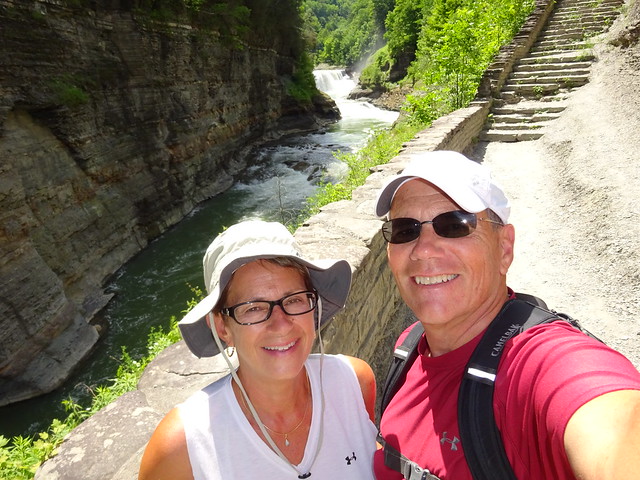 The trail from the rim of the gorge down to the bridge involves going down 127 steps (at least that’s the number on a sign at the top).  Of course, what goes down must come back up! 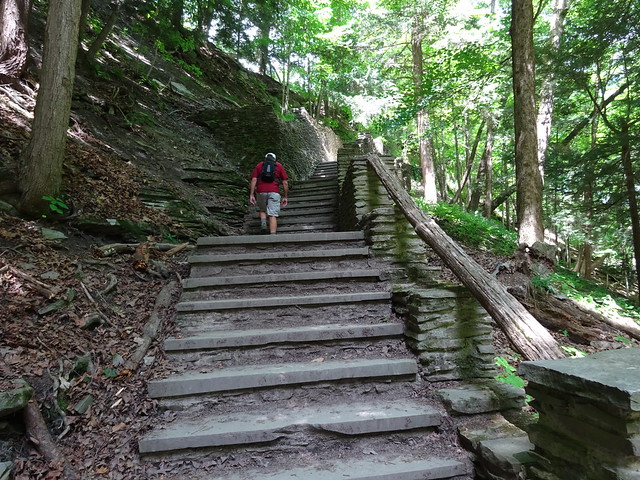 As we neared Middle Falls on the return hike, the light was just right for some great rainbows in the mist. 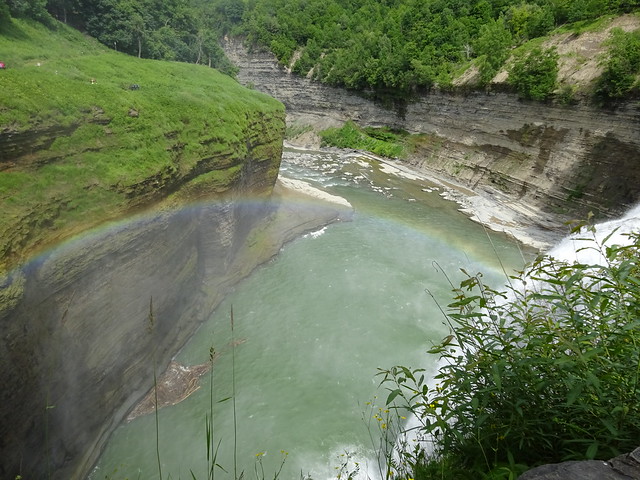 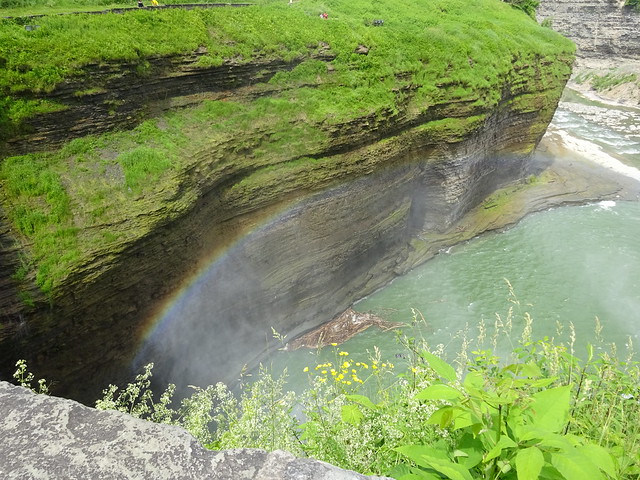 As we neared the Upper Falls it was time to re-conquer the long set of steps that seemed so easy at the beginning of the hike!  Total steps for the day…1,082 round trip!  Only a former elementary teacher would think to count all the steps. 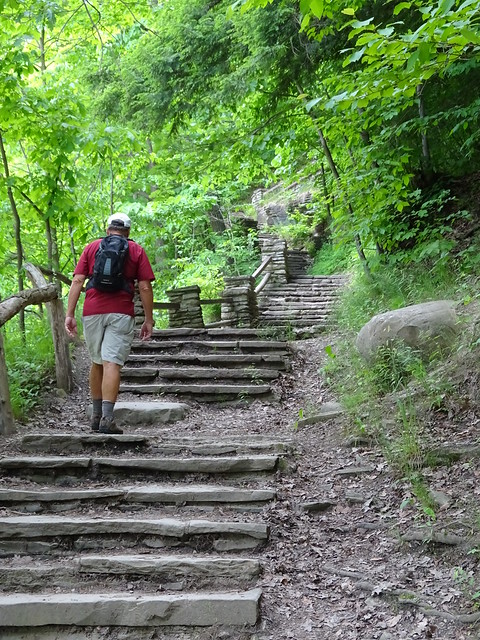 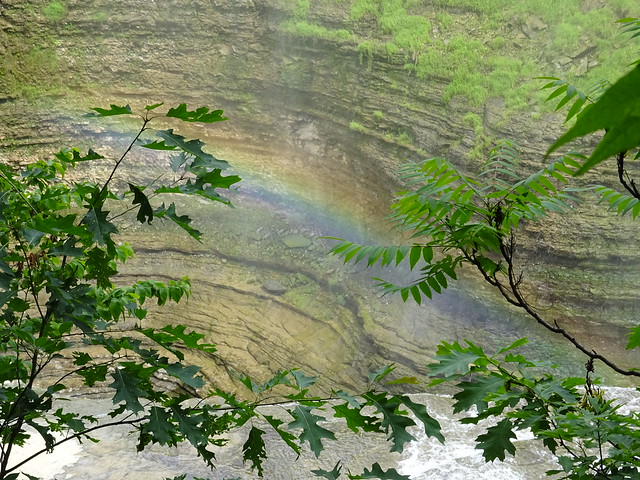 One last glimpse of a rainbow above Upper Falls

This was one of the nicest hikes we have found on the East Coast, with challenging elevation changes and great water views!  The sunshine, warm temperatures, and low humidity made for a great day.