Biking Along the Erie Canal

The Erie Canal flows just south of Rochester as it makes its way “from Albany to Buffalo” (cue the old song).  There is a great biking/walking/running path the length of the canal along the old tow path.  On two recent days we drove north from Geneseo to one of the numerous parking areas along the canal to enjoy some bicycling. 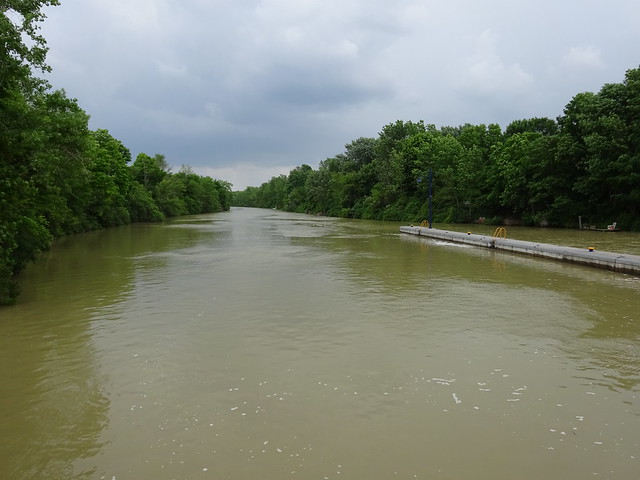 Typical view of the Erie Canal

The majority of the trail in the Rochester area is nicely paved, but there are some areas that are gravel. 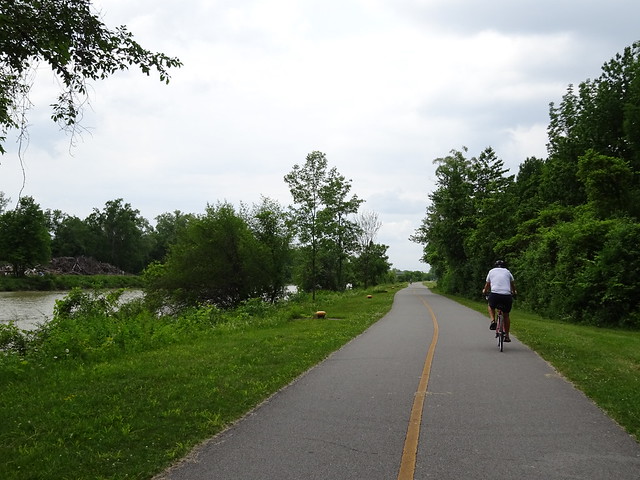 The first ride we took was toward the city of Rochester.  As we approached the city a detour on the path took us near the University of Rochester, so we took some time to ride around the campus.  The University  enrolls approximately 5,600 undergraduates and 4,600 graduate students.  With that many students we were surprised at the small size of the main athletic field pictured below. 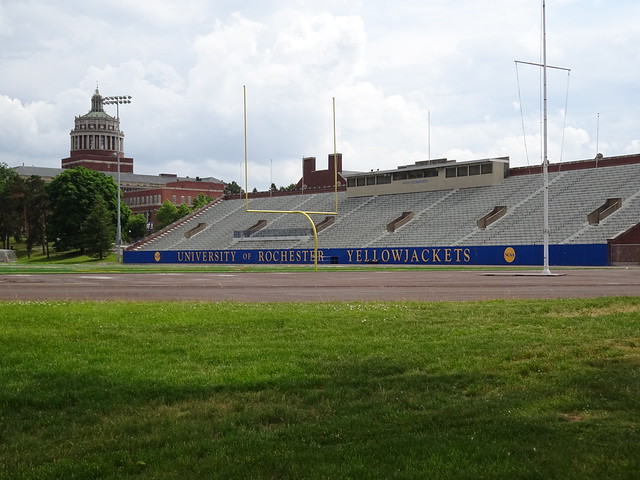 It is a multi-use facility with seating only on one side.  But we think this school has the right philosophical mix of academics and athletics.  When we visit a college campus we always read its Wikipedia page and look at the list of notable graduates.  With most schools, the list is filled with athletes who went on to compete at the professional level.  But the list of notable graduates for UR does not include one single athlete.  But it does have a long list of successful science, medical, and engineering people including five Nobel Prize winners, eight Pulitzer Prize winners, and nearly one fourth of the scientists on the board advising NASA on the development of the replacement for the Hubble Telescope.  Not a bad list!

A few days later we returned to the same parking area and took a ride along the canal in the opposite direction, passing through the small towns of Pittsford and Fairport.  The canal was originally constructed in the early 19th century as a commercial transportation line from the Great Lakes to NYC.  Today it is mainly used by a wide variety of pleasure boats.  The boat pictured below is called a Lockmaster and can be rented for three, four, or seven days. 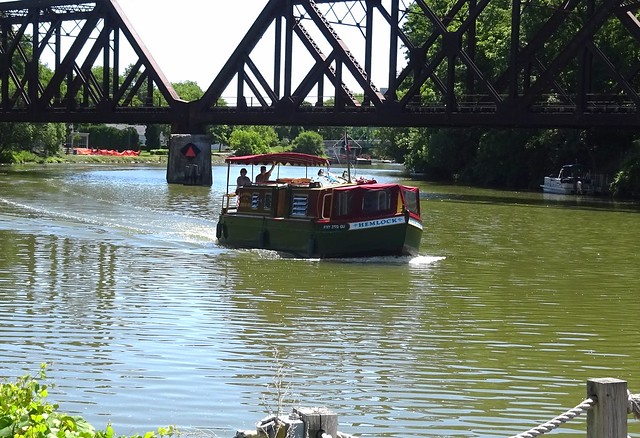 If you’re not up for a week on the canal piloting your own boat, a three hour cruise on a tour boat is available.  Below is the Colonial Belle on a canal cruise from nearby Fairport. 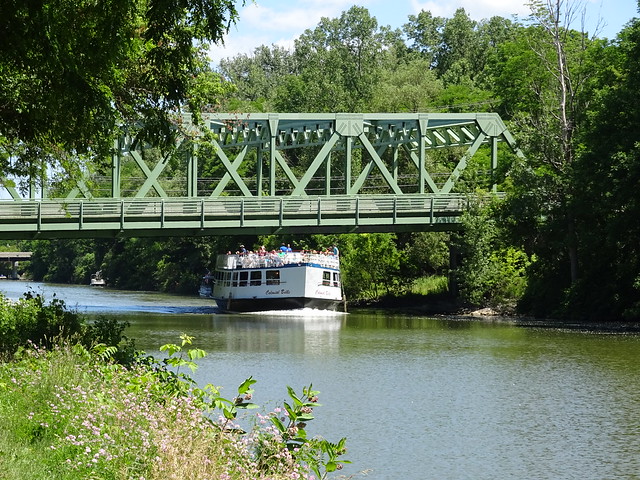 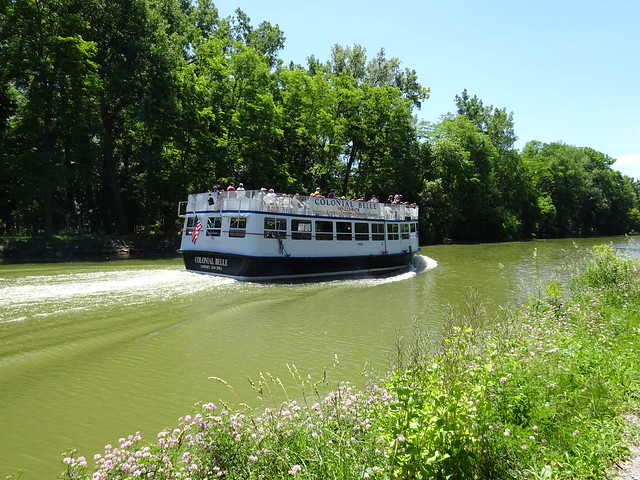 Not up for a cruise on a crowded boat?   Then the vessel pictured below might just be what you would like. 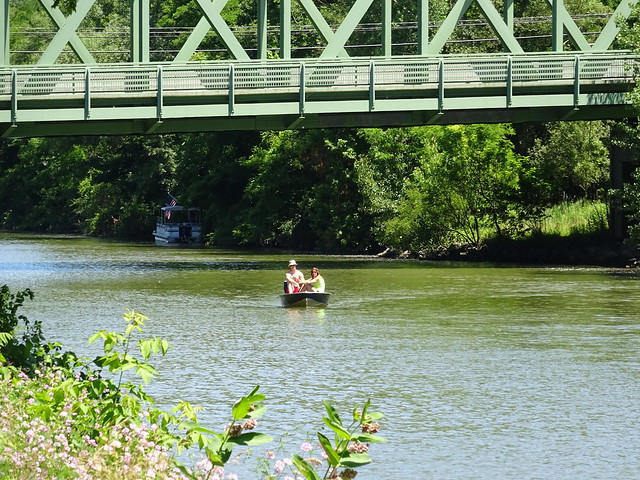 On the return ride through Pittsford we could hear music from a park bandstand on the other side of the canal. 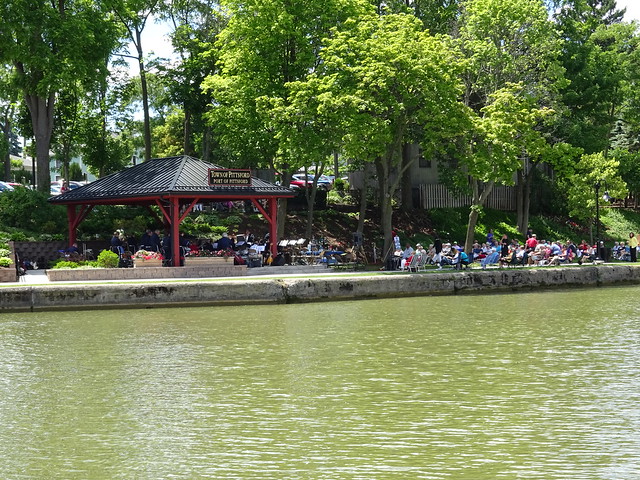 As we entered the town we recognized the “Washington Post March” by John Philip Sousa.  Is this a classic American scene or what?  Riding a bicycle along a canal through a small town while listening to a Sousa march . . . 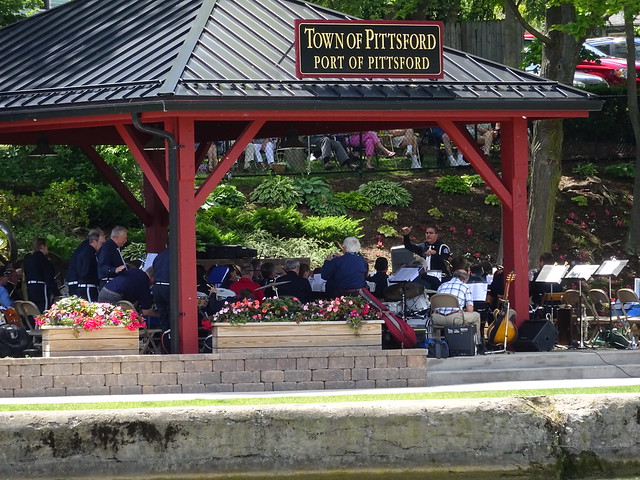 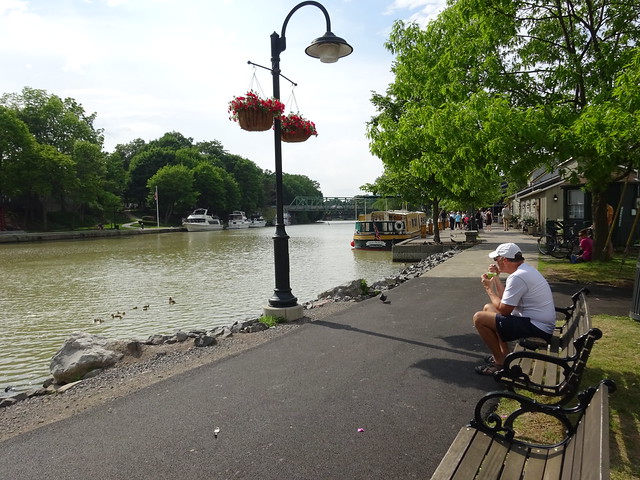 Our grandparents could have had the same experience a hundred years ago.  It doesn’t get any better than this ! ! !

37 Responses to Biking Along the Erie Canal