During our second week here in Borrego Springs we continued to enjoy some hiking, Jeeping, and golfing.  One afternoon we drove about 30 miles to the south to hike up Rainbow Canyon.  To get to the canyon we took Borrego Springs Road south and turned right on to Yaqui Pass Road.  That road ends at CA 78, where we turned west and drove seven miles to Scissors Crossing.  There we turned south on county road S2 for 11 miles.  At that point we turned around and parked in a small pull-out with Rainbow Canyon to our east. 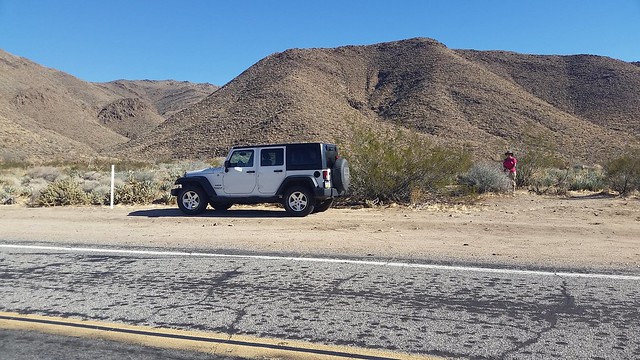 It was a short hike across the desert to the opening of the canyon.  Rainbow Canyon is not a difficult hike, but a number of pour-overs (12) requiring some scrambling to get up and over, make things interesting. 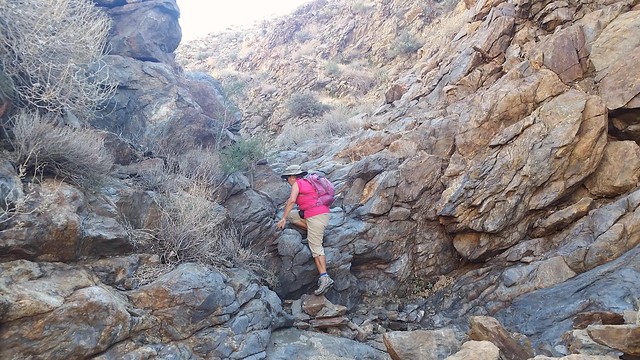 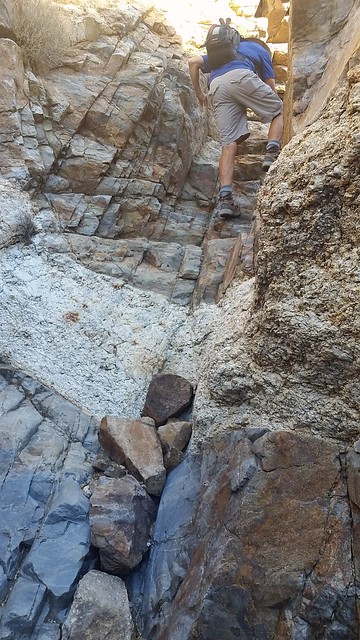 Colorful rock formations line the sides of the canyon. 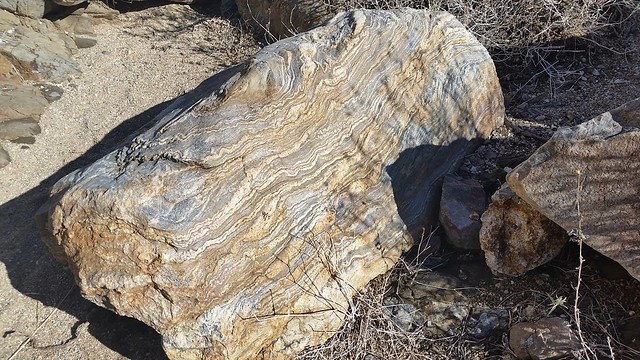 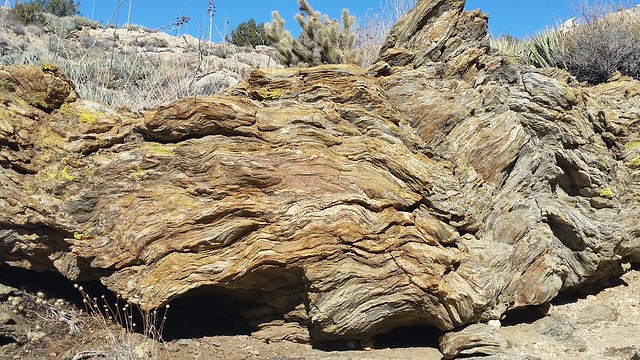 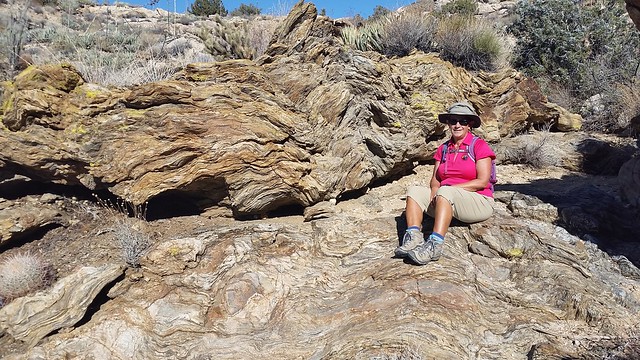 We hiked about 1.5 miles to where the canyon opens up to a flat area overlooking the Blair Valley.  At that point we turned around and returned back down through the canyon.

A couple of days later we drove/hiked a short distance from our park to find a small bench sitting on a hill east of town.  To get to the bench we drove east on county road S22 to the turn onto the wash leading to Fonts Point.  At just short of 1.2 miles from the highway, we parked on the right side of the main wash near the entrance to a smaller wash to the west. 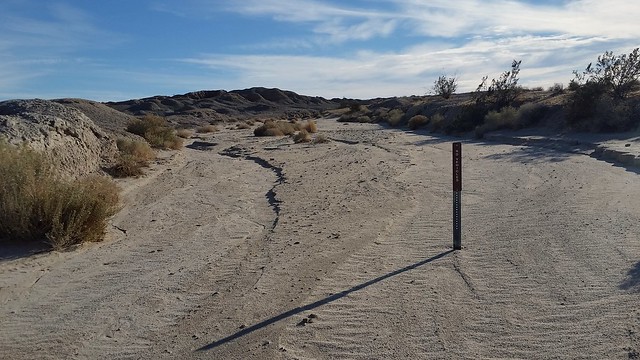 Entrance to the small wash

After hiking about half a mile west on the small wash we could see something sitting atop a hill that looked like it could be the bench. 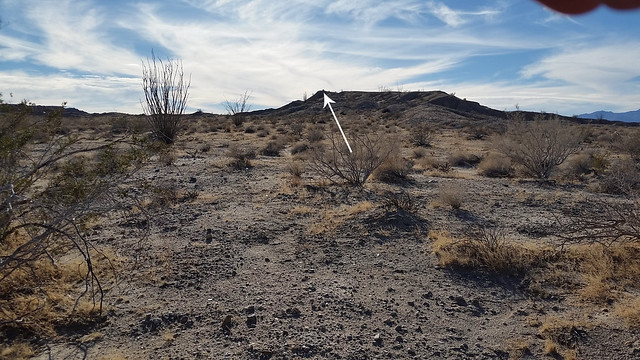 Is this the bench?

We hiked up to the top of the hill and found our target, Burks’ Bench. 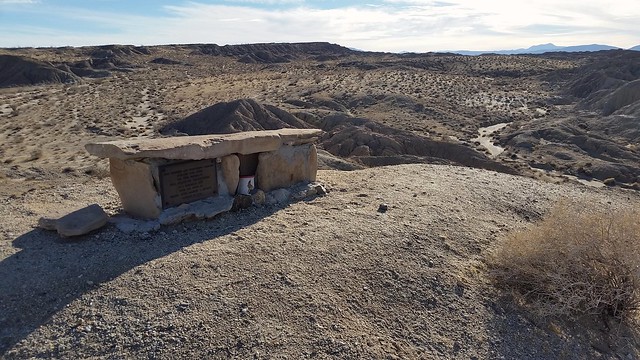 Dana Burks was a Palm Springs and Los Angeles real estate developer who saw the potential of developing Borrego Valley and purchased thousands of acres of land after the Great Depression.  The slow economic recovery following the Depression made him lose interest in the area.  His heirs still owned 1600 acres in 1974 when they decided to donate it to the state.  The bench overlooks the donated lands.  A plaque on the bench commemorates the gift. 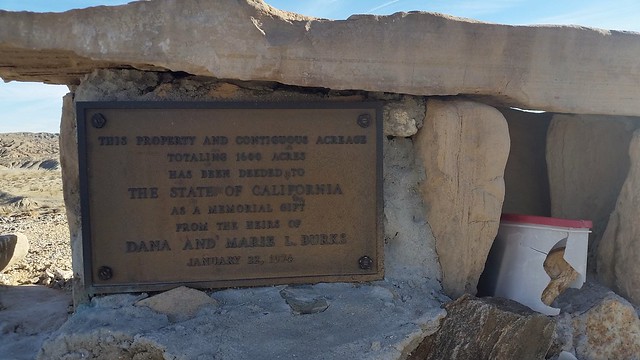 Next to the plaque we found a small container with a journal book inside.  Visitors to the bench record their presence and often leave a message concerning their visit. 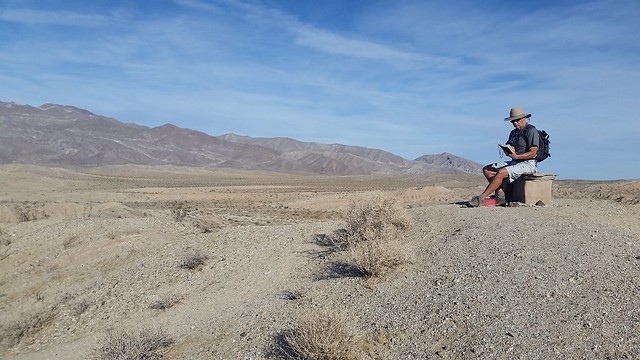 Every couple of days we enjoy a round of golf while taking in the fantastic views all around us. 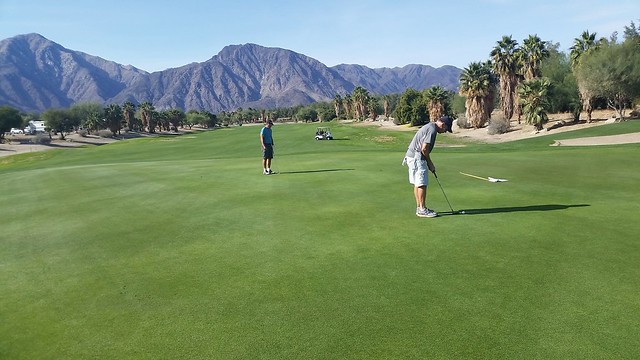 One afternoon we joined Dave and Sue in their Jeep to explore some back roads in Anza-Borrego Desert State Park.  We headed east on county road S22 for about 16 miles.  There we turned south into the Arroyo-Salado wash, the same spot where we entered the desert the previous week with Jodie and Bill (On the Road Abode).  Our first stop was a small oasis called 17 Palms. 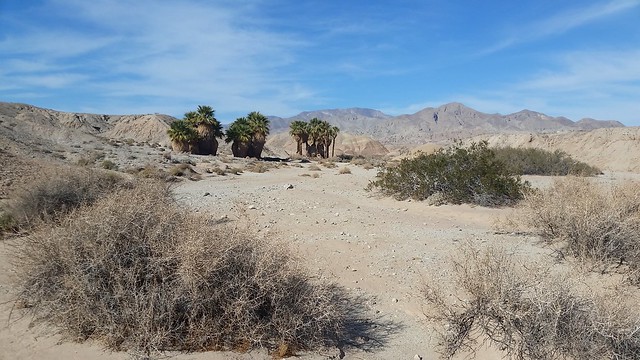 We’re not sure when this grove was named, but there are over 20 palms there now.  Maybe a few more grew up since Spanish explorers first came through the area.  There is a mailbox located between two of the trees with a notebook for visitors to sign. 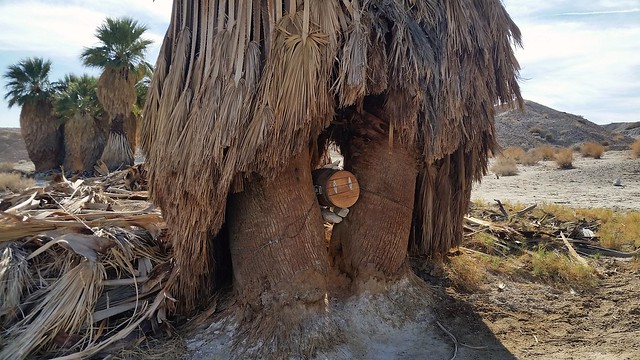 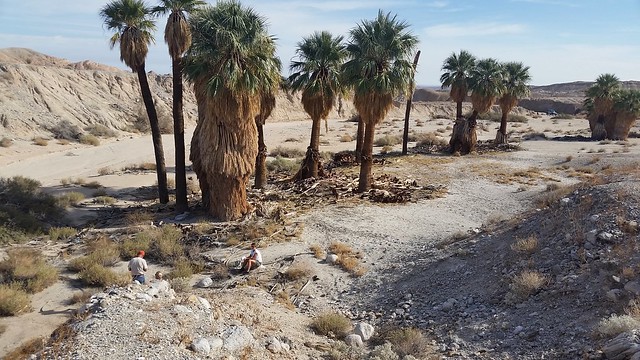 Looking down at our lunch spot from a nearby hill

Following lunch we continued driving south a bit before turning to the west on what’s known as the Cut Across Trail.  After a few miles we came to a road leading north up into Rainbow Wash.  The wash goes in the badlands that are visible from Fonts Point, a high point in the desert we last visited the week before with Jodie and Bill. 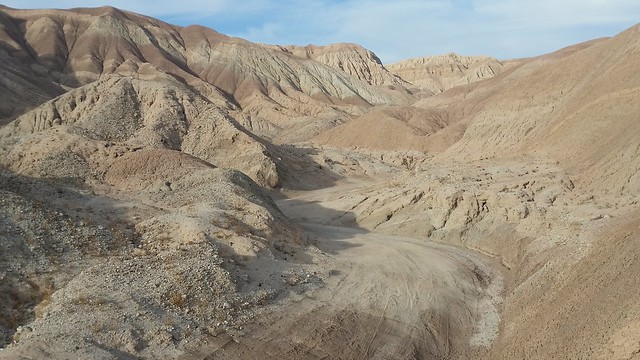 We continued up into the wash until the road began to narrow and became very tilted and twisty (both terms used by professional Jeepers!).  At that point we stopped and continued  for a bit on foot. 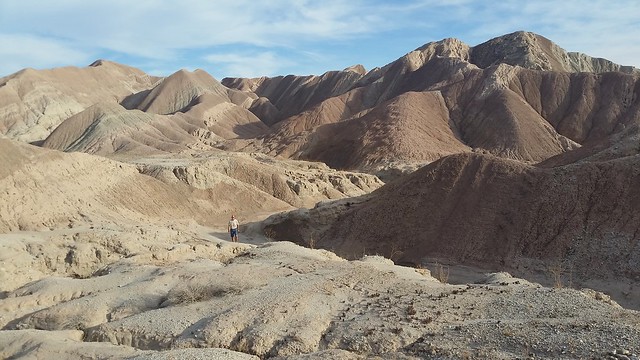 The landscape all around us was very impressive.  The sky was partly cloudy so the colors changed as the sun went in and out of the clouds. 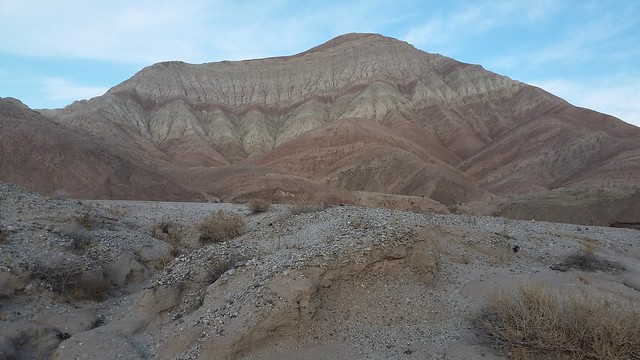 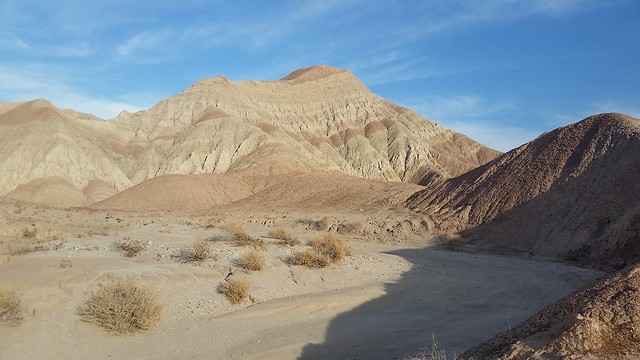 As we crossed over a small hill we almost stepped on two small eggs nestled in some rocks and twigs.   We have no idea who laid the eggs or how they would survive in this harsh environment. 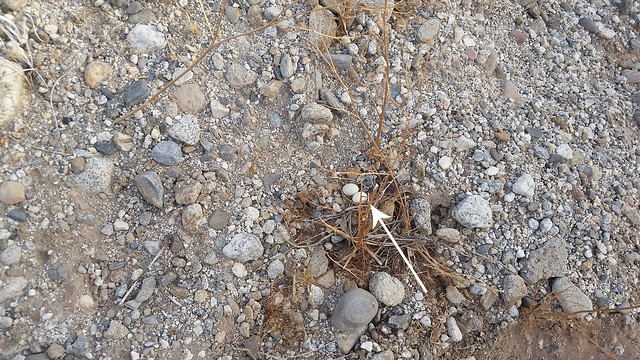 Later in the week we took a ride south to hike up Pinyon Wash.  To get there we drove out Borrego Springs Road and turned right on to Yaqui Pass Road.  That road ends at CA 78 where we turned east and drove just over four miles to the wash entrance (marked with a sign).  A mile and a half up the wash we took the left side of a fork and continued for a little over four miles to where the road ends at a pile of huge boulders.  The trail begins on the right side of those rocks and goes up through them for a short distance before the wash flattens out. 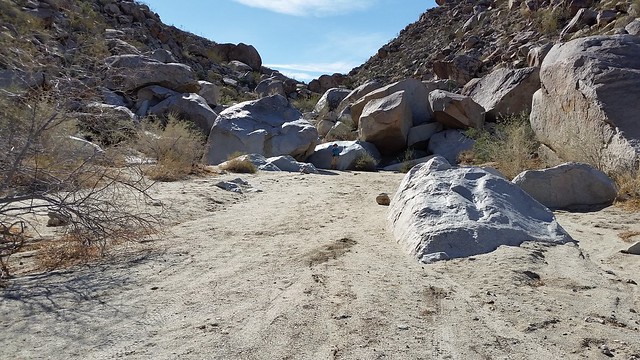 After about a mile and a half we exited the wash into a large open area called Harper Flats. 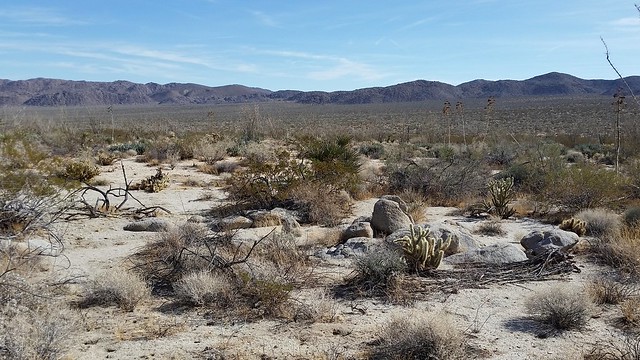 We read that there were a number of large rocks with morteros (grinding holes) made by early inhabitants as they ground corn.  We searched the area but could only find one of those rocks.  An animal had left his scat in one of the depressions, reminding us of a recent presidential phrase used to describe some countries of Africa and the Caribbean. 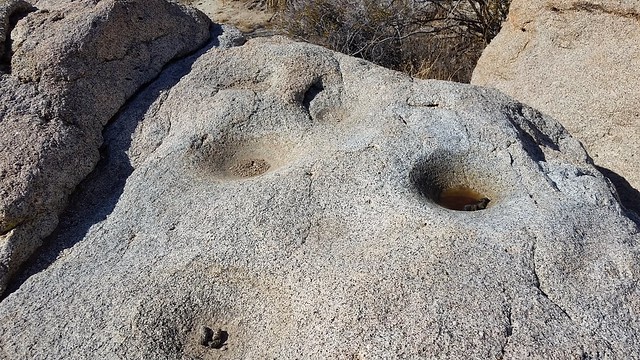 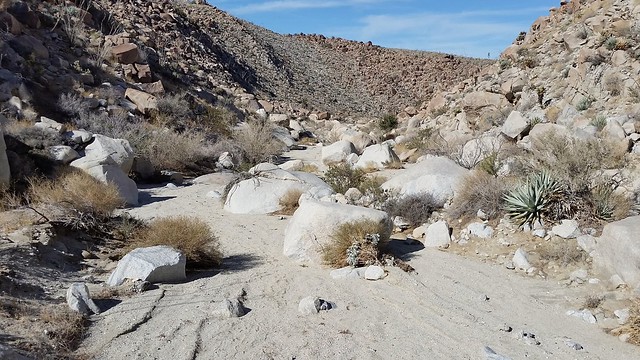 Looking back down the wash 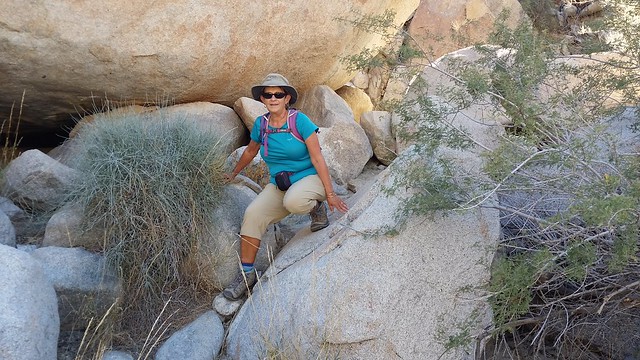 A bit of scrambling was required near the trailhead

Did we mention that we’re enjoying the golf course? 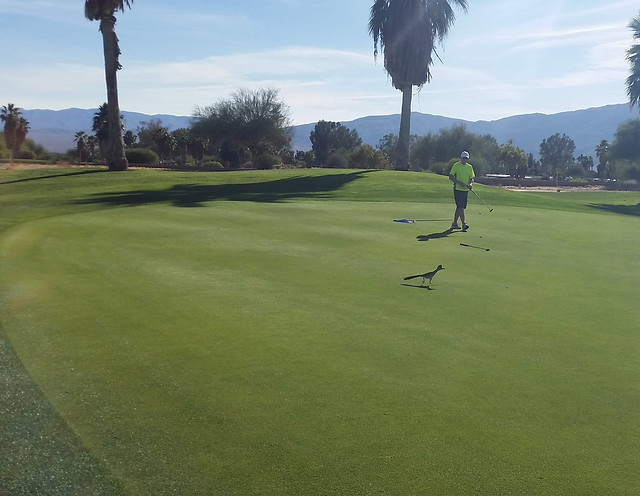 An unusual twosome on the second green

With a bit over two weeks remaining in our stay here we have a number of sites to visit on our list.  More on these later . . .