We’ve continued to enjoy nice weather and fun activities during our second week here in the desert of southern California.  One afternoon we joined Dave, Sue, and Lewis for a visit to an interesting rock formation west of here near the town of Warner Springs. 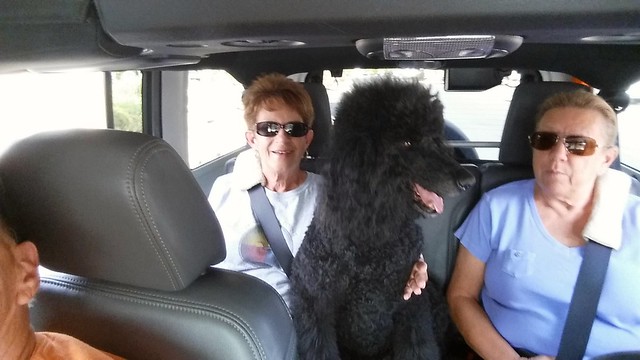 Lewis served as our navigator

To get to the rock formation we took San Diego county road S22 west up steeply through the Montezuma  Grade to CA Rt. 89.  There we turned north to the small town of Warner Springs.  There is a three mile long trail leading from Rte. 89 to the rock formation.  But we learned from a post in Al and Kelly’s blog (Travel With The Bayfield Bunch) that the first right turn in Warner Springs on to Camino San Ignacio Road leads to a pull off where it’s just a short walk to the formation.  But there was one little obstacle to get there, a fence with a large gate. 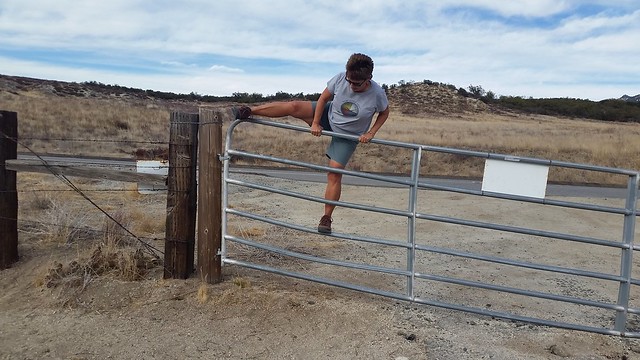 But we quickly made it up, over, or around the obstacle and headed out to the rock formation. 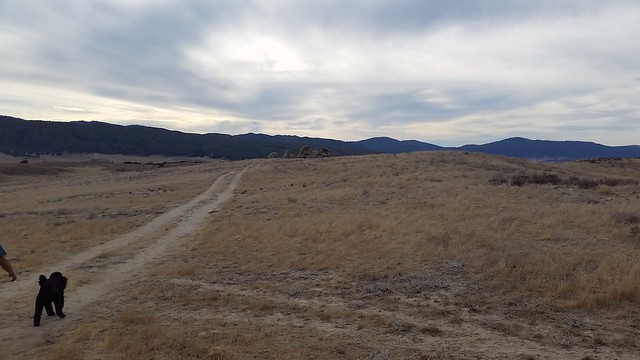 The rock formation is called Eagle Rock.  We’re not sure where the name came from but some people apparently see the image of a bird in the rocks. 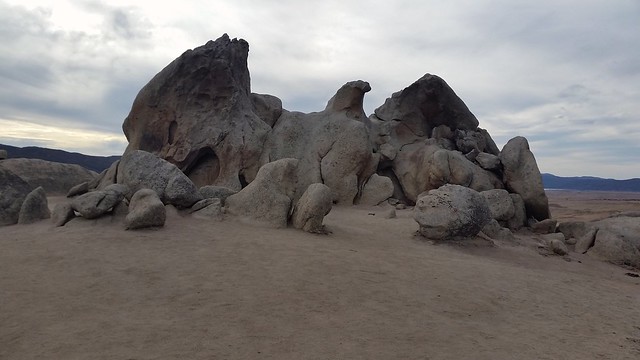 Lewis indicated that he didn’t see the resemblance. 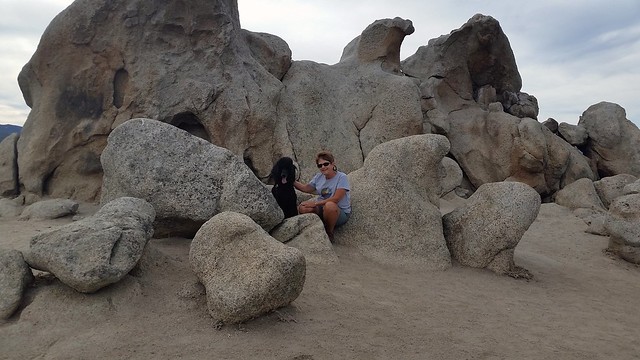 On the drive back we took a detour to visit the little town of Santa Ysabel and their most famous business, the Julian Pie Company.  If you are in the San Diego area for any length of time, you will probably come in contact with one of these tasty desserts.  Be careful, they are addicting! 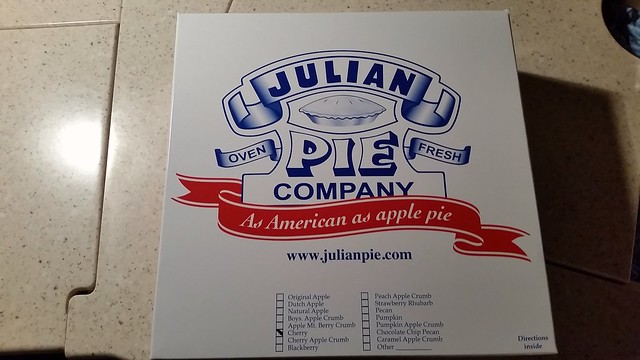 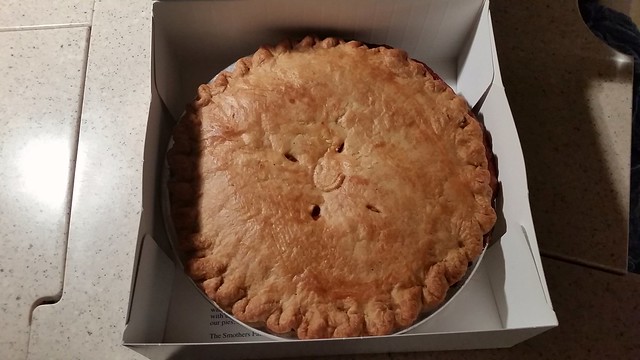 The next day friends Jodi and Bill (On the Road Abode) drove over from where they were staying in Thermal, CA for a visit.  After sitting at our site for a bit to get “re-acquainted” (we hadn’t seen them in a year) the six of us (remember, Dave and Sue are here, too) drove a short distance to Keslings Kitchen, a new restaurant in town, for lunch before heading out into the desert for some exploring.  Our first stop was at Fonts Point, a 14 mile drive to the east of Borrego Springs. 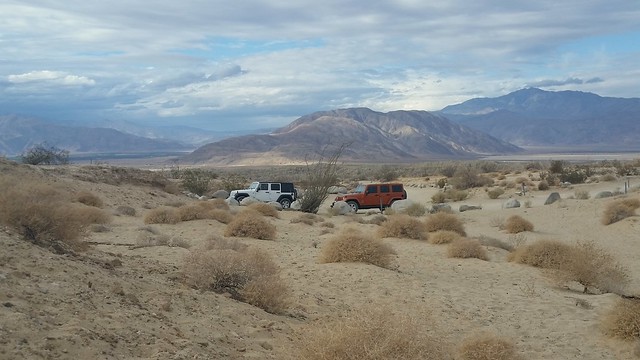 Fonts Point is a high area with great views of some badlands directly to the east and mountains to the west and north. 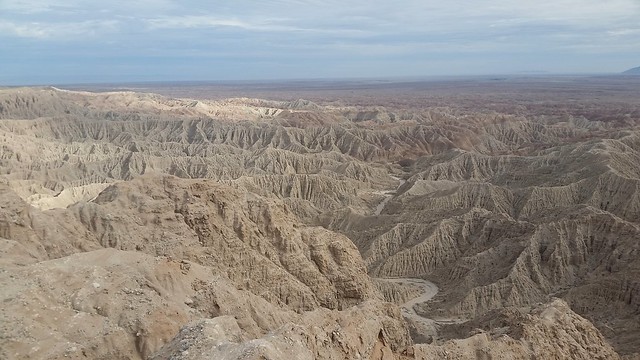 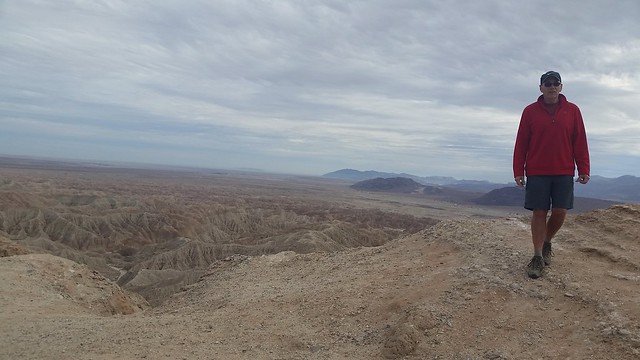 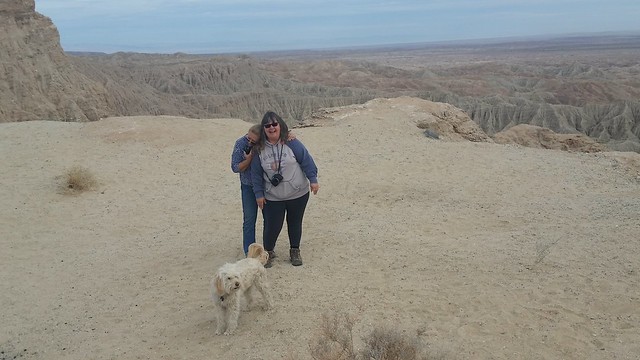 Sue and Jodie laugh it up while Tessa stands guard 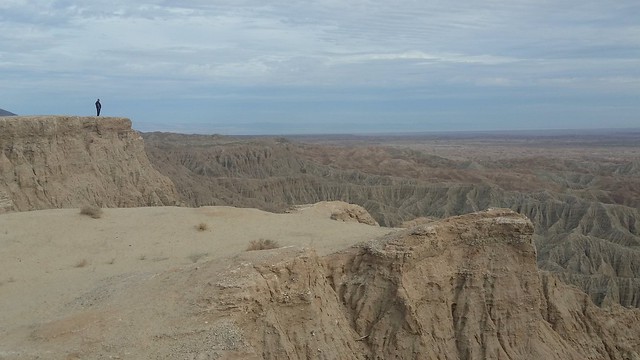 A local philosopher (Bill) contemplates the message of the badlands 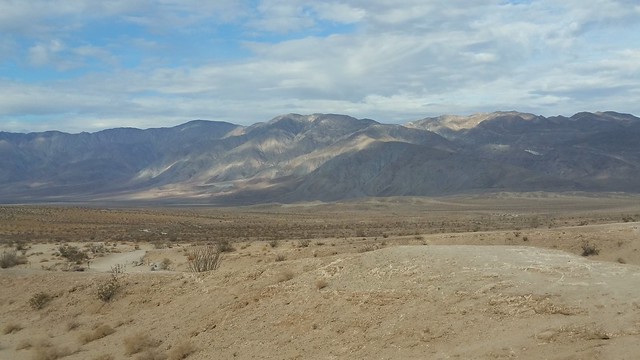 Breaks in the clouds paint the nearby mountains with sunlight

We left Fonts Point and drove further east on the S22 highway.  Five miles down the highway we turned south at the sign for the Arroyo Salada Campground and headed along a winding path through a series of washes.  We made a brief stop at a spot called Five Palms.  The name seemed appropriate to us. 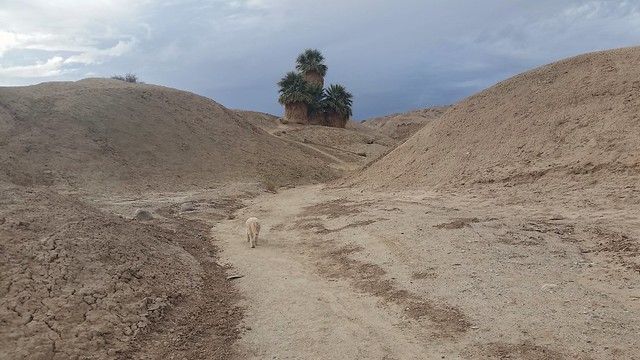 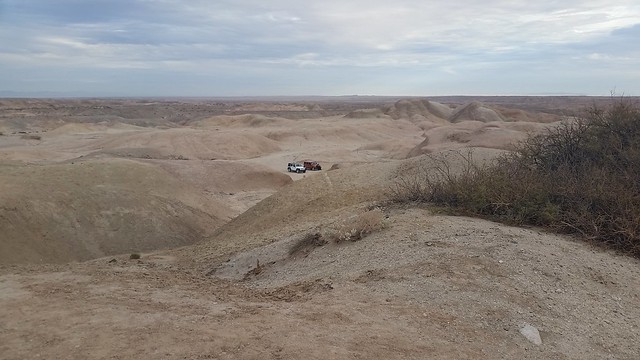 We then continued to follow the winding route through the desert until we came to a small field of bowling ball size rocks known as the Pumpkin Patch. 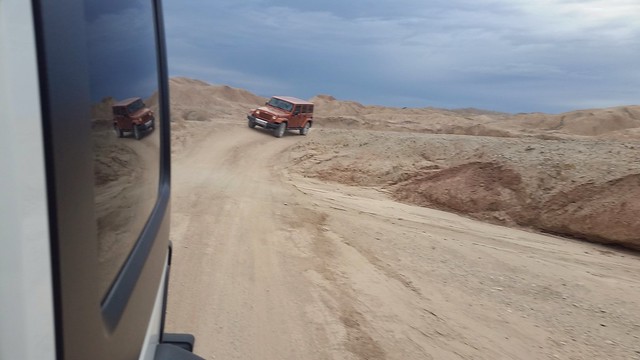 This unique landscape is the result of wind and water continuously eroding the surface soil and revealing globular sandstone concretions that look much like pumpkins in size and shape. The concretions are believed to be formed by the natural cementing of sand particles to a small object such as a piece of shell, a grain of sand or even an insect. 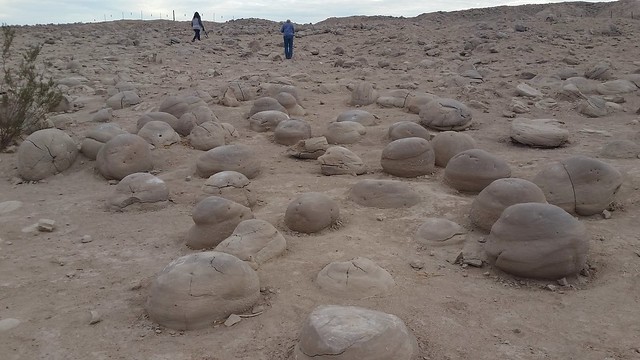 Jodee and Sue wander in the Pumpkin Patch 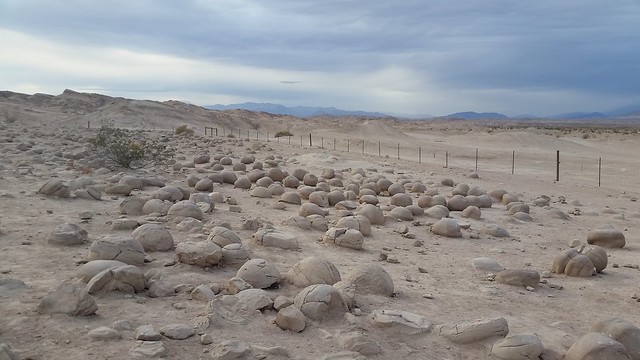 The empty, dusty parking area by the Pumpkin Patch seemed to be the perfect place for a dog to go a little crazy.  The normally calm Tessa recognized this and spent a few minutes entertaining us as she raced around in circles, kicking up a cool dust trail in her wake. 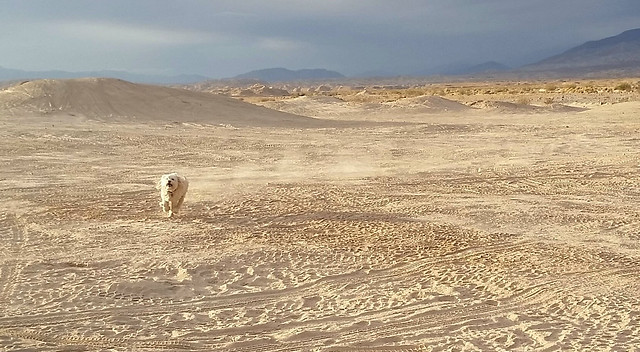 Who let the dogs out?

The sun was quickly setting in the west (as it usually does out here) so we decided we needed to head north back to the highway.  We have a very good map of the area and selected a route that would take us there.  But we were in a section of the Ocotillo Wells Recreation Area and the area is heavily used by off-road vehicles who often create their own roads, so following a trail on the map with numerous crossings with unmarked paths is difficult. 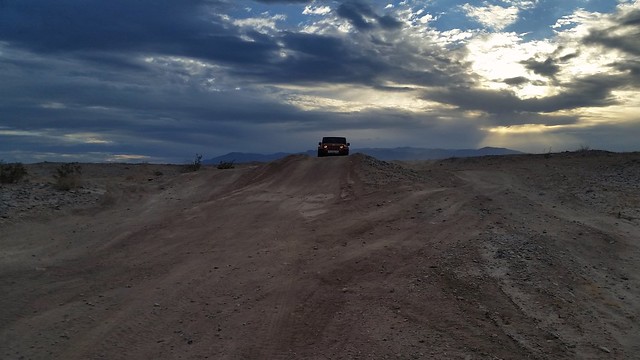 Needless to say, we took a wrong turn somewhere and, even though we could see a radio tower that we knew was on the highway, we had a bit of trouble finding a spot to drive up out of the washes to get to it. 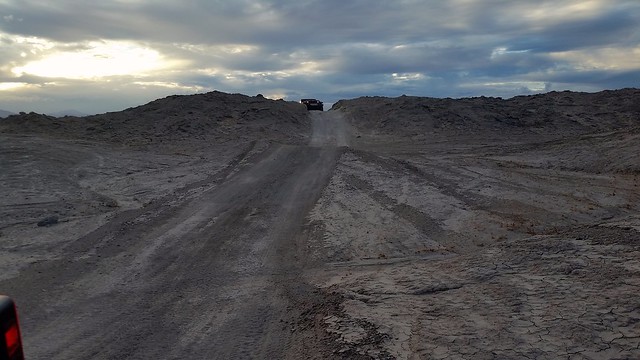 The path we ended up on took us up and over some fairly significant mounds, but Jeeps handle these obstacles without any problem.  It turned out to be great fun.  We made it out just before dark, said our good-byes to Bill, Jodie, and Tessa and headed home after another great day in the desert.