We’ve been keeping busy during our nine day stay in Portland.  On Saturday we headed down into the city to visit the famous Portland Farmers’ Market near Portland State University.  The flagship of seven markets operated by the group, this market was named the best farmers market in the United States for its size, varied offerings, live entertainment, weekly cooking demos, and more, by Bravo TV. 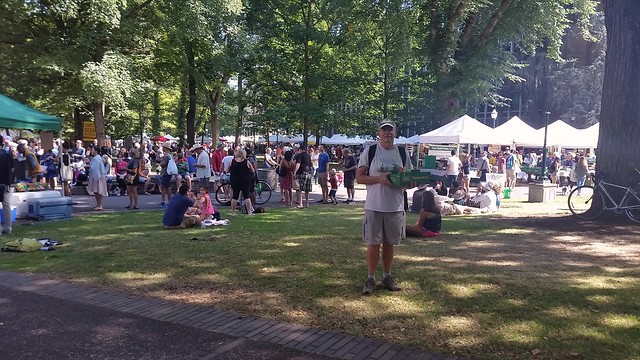 A young shopper proudly displays his box of fresh fruit 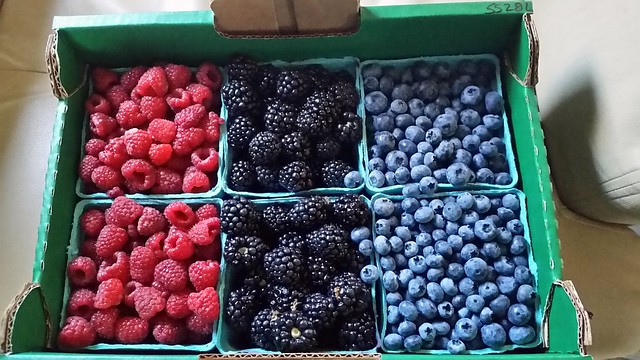 Time to bake a pie!

Portland has a pretty active radical group community, so what would a gathering like the market be without some of them showing up.  A small group from the hacktivist (the subversive use of computers and computer networks to promote a political agenda or a social change) group Anonymous stood silently near the vendors, protesting the treatment of animals. 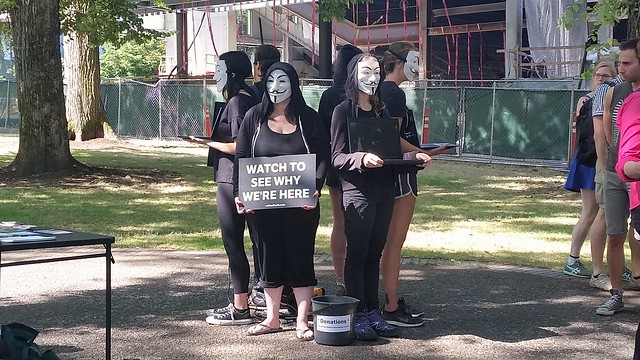 Monday was eclipse day and Portland was just north of the path of totality.  We knew we would experience about 99.37 percent coverage of the sun but read that even that coverage is far inferior to the experience of a total eclipse.   The traffic report on local television that morning showed extremely heavy traffic southbound on I-5.  So we headed to the east a few miles before heading south on a back road until we knew we were in the path of totality.  Unless you live somewhere in a cave you’ve seen your fill of eclipse pictures so we’ll only share one from our experience. 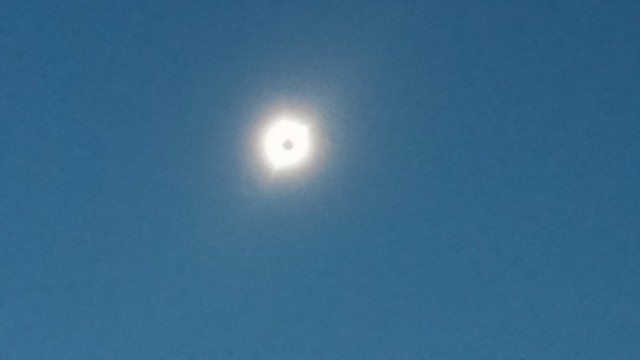 After the eclipse we decided to take a long drive all the way around the base of Mt. Hood. 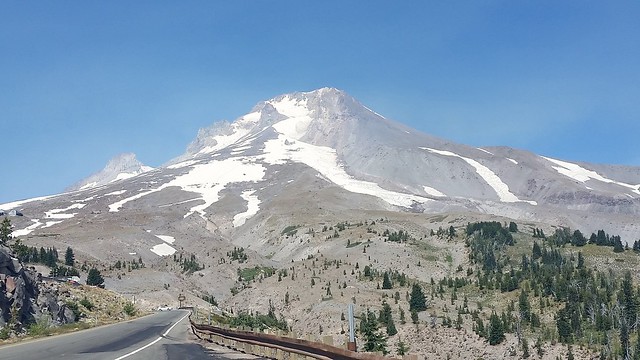 Peak of Mt. Hood from the Timberline Lodge parking lot 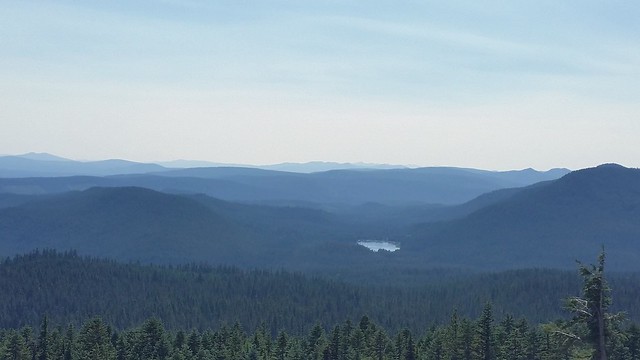 Looking south toward Clear Lake with heavy haze from the wildfires 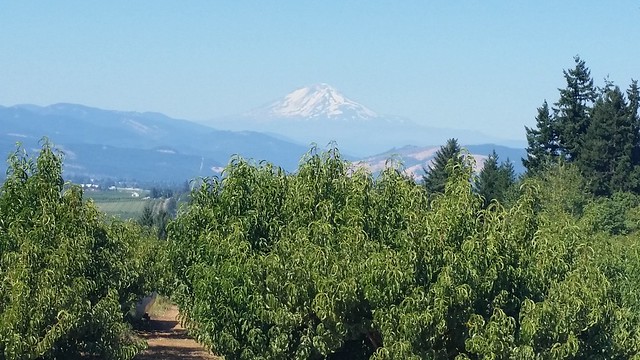 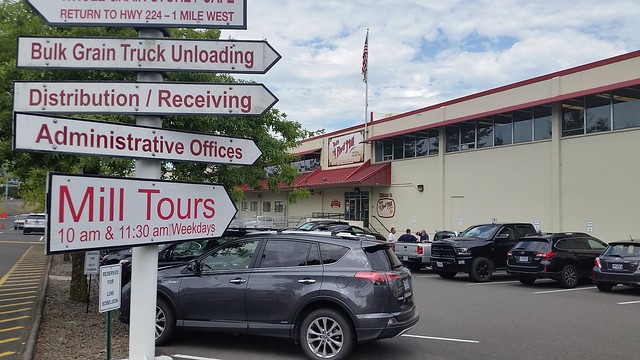 The mill offers a brief tour two times each morning on weekdays.  We arrived in time for the 10:00 showing. 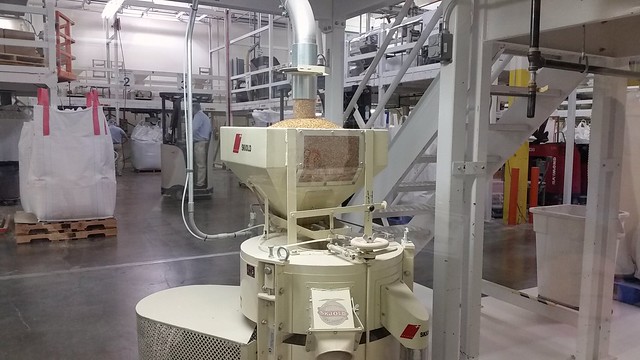 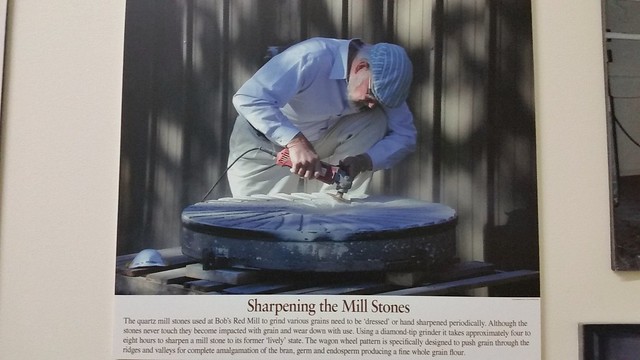 About a mile from the mill there is a Bob’s Red Mill Whole Grain Store.  It is a bit overwhelming to shop for whole grains here as they stock every one of the 1,347,568 types of grain produced by the mill.  Well, maybe just 337 products. 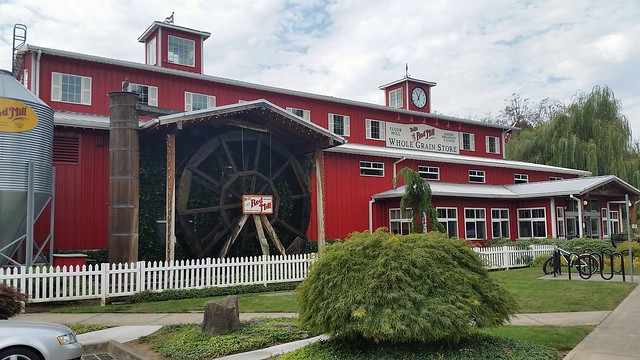 Toward the end of our visit here we wanted to get in a hike since we’ve just been bike riding.  We are located just a short drive from the Columbia River Gorge, so we decided to head there for a hike at the very popular Multnomah Falls.  We were fortunate to find a parking place a half mile away at the Wahkeena Falls.  From there a half mile trail leads to the Multnomah Falls.  This is a very popular spot and the falls viewing area was filled with people. 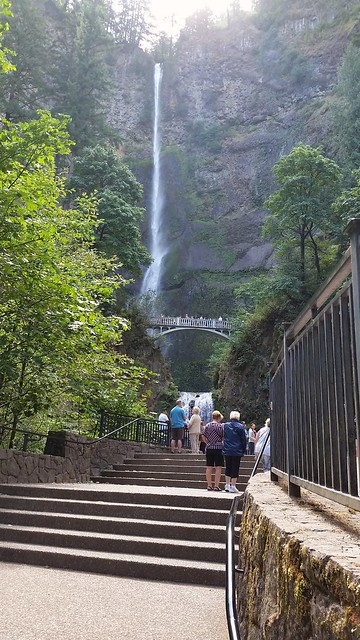 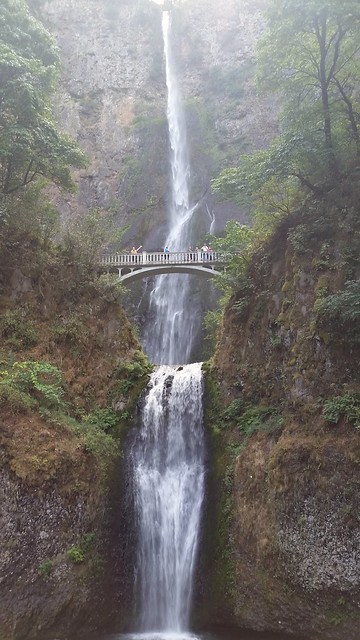 View of the Benson Bridge

Our plan was to do a five mile hike going steeply up into the gorge, then go west along a trail near the top, then return back down a trail to the Wahkeena Falls where we left the Jeep.  We did this hike on a visit here a few years ago and were anxious to complete it again.  The trail first went up and across the famous Benson Bridge near the falls. 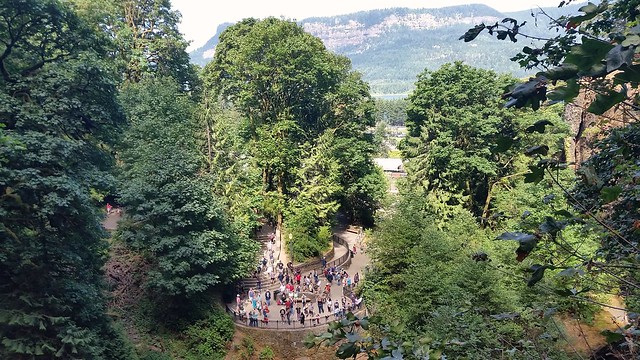 Looking back down from the Benson Bridge

We continued climbing up the Larch Mountain Trail beyond the bridge, going by a number of large and small waterfalls as we hiked. 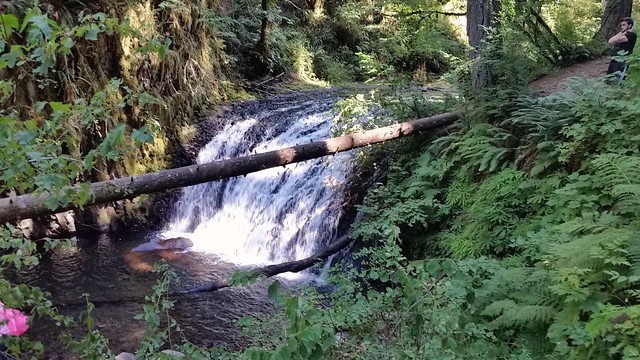 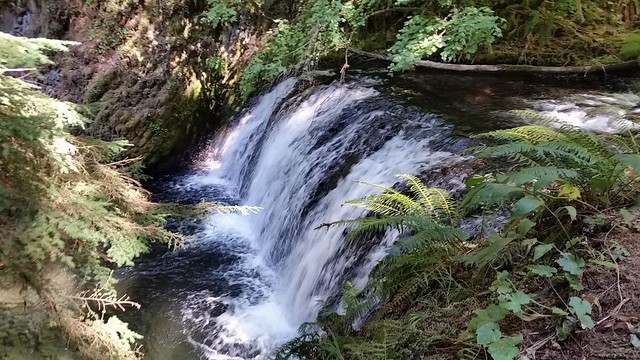 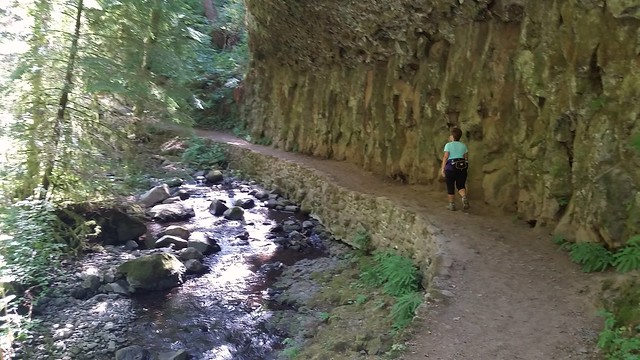 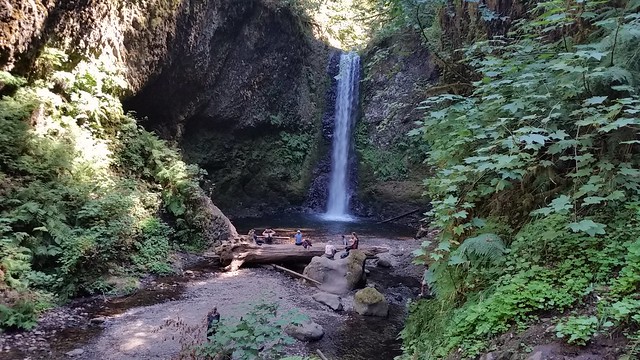 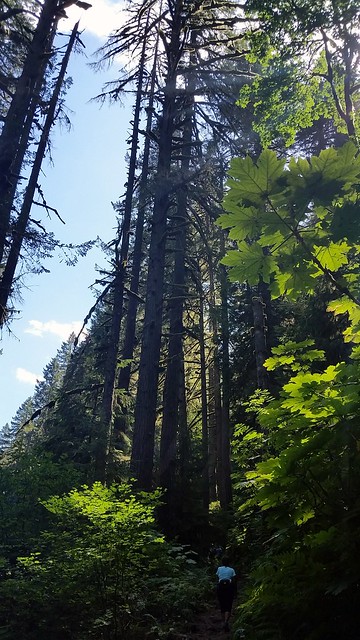 Some trees here are very tall! 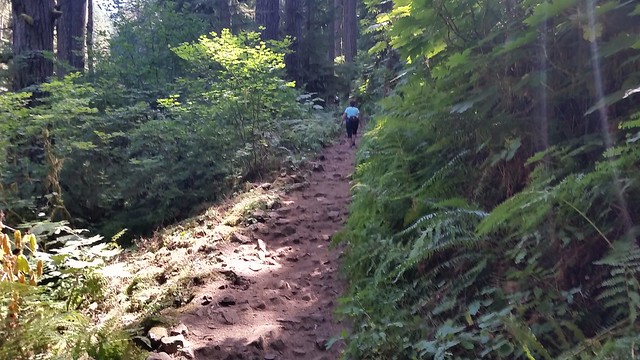 After climbing up for about two miles we turned west on the Wahkeena Trail.   This trail continued to gain in elevation, although the trail was not as steep as the Larch Trail.  After a hike of about a mile we reached the highest point in the loop (1,600 feet of elevation gain) where we turned north on the Vista Point Trail and headed down.  At one point a spring flows in the trail, making footing a bit of a challenge. 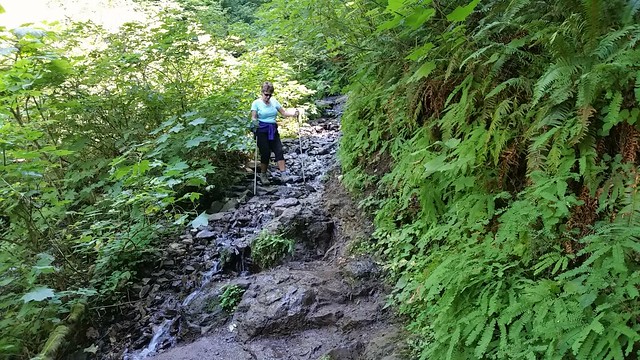 The trail hugs Wahkeena Creek, passing many spots with cool rapids and falls including  Fairy Falls, a beautiful fan form falls right next to the trail. 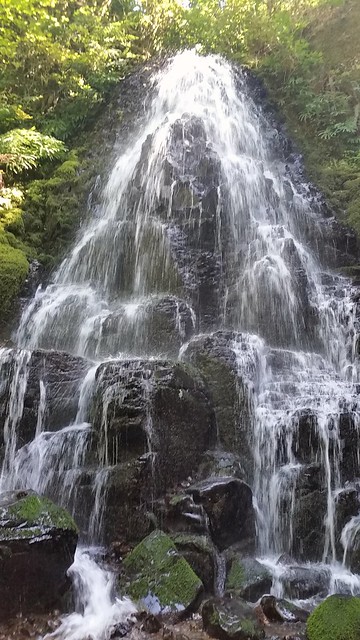 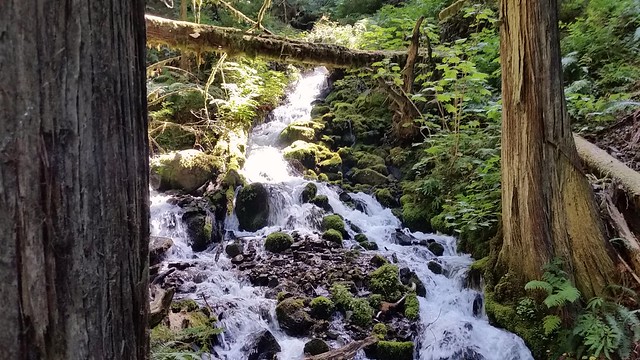 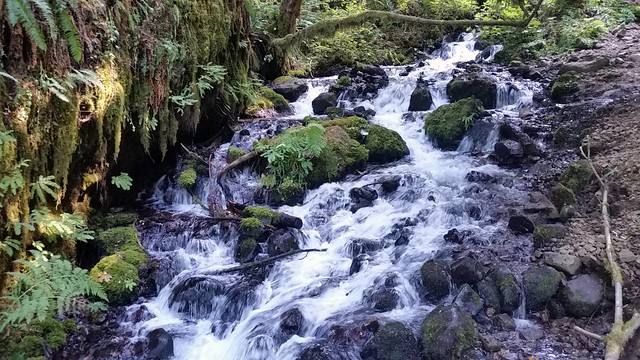 As we neared the bottom of the canyon we stopped at Lemmon’s Viewpoint to enjoy some great views of the Columbia River. 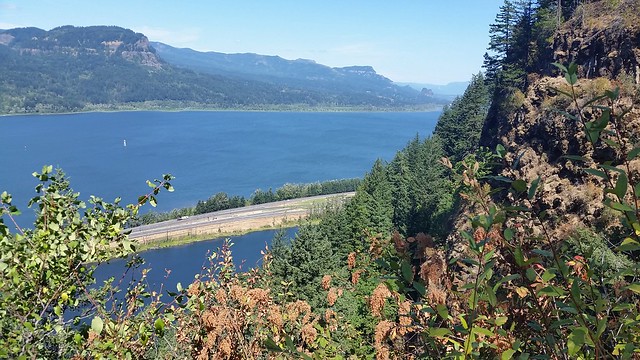 The trail then crosses a bridge over the creek right next to Wahkeena Falls.  Even in late August the flow over the falls was very strong. 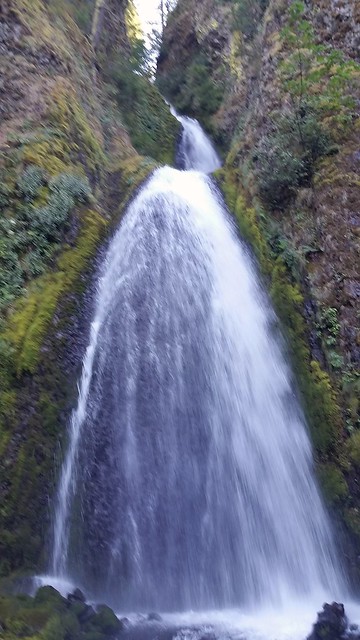 We made it back to the Jeep after a hike of five and half miles.  The steep up and down of the loop made this a very challenging walk, but the eight named waterfalls as well as countless cascades and intermittent falls make the effort worthwhile.

That concludes our stay in the Portland area.   We found some interesting things to do but the traffic around here is unbelievable.   Columbia River RV Park is located along the river right inbetween the two interstate bridges crossing into Washington (the only bridges over the river).  Both bridges are clogged most of the day, causing traffic to back up the on-ramps into the surface streets.  Some people must spend a good portion of their lives sitting in traffic each day!

We are now headed back to Bend, OR and will stay ten days in Crown Villa RV Park where we spent a month in late May and early June.  We planned this return to hike some of the trails we missed earlier due to heavy snow.  But forest fires in the area might limit our hiking.  More on that later . . .

16 Responses to Hanging Around Portland