Repairs Then on to Portland

We left Florence on Monday morning to return to Coburg, just north of Eugene, for our return reservation at Cummins Northwest.  We stayed the night across I-5 at Premier RV Resort and arrived at the Cummins location just before the appointed hour on Tuesday morning.  The plan was for them to replace the defective engine fan assembly and a leaking exhaust manifold.  Neither task is that difficult in a normal vehicle where the engine is readily accessible.  But in a motorhome the engine is crammed into the back with limited access, so they end up having to remove many things just to get to the engine.   We were prepared for the work to take all day Tuesday and probably part of the morning on Wednesday.  Andy, our service writer, said they could pull the motorhome out of the garage on Tuesday night so we could sleep in it, but we decided to just spend the night at a hotel.  About mid-day on Tuesday we got the dreaded call from Andy.  It’s never good to get a call from the garage long before the work is scheduled to be completed.  That almost always means they found another problem.  Sure enough, they found the turbocharger was on its last legs and needed to be replaced!  OK, just add another $3,000 to the bill (just for the part!).  The good news is that since the turbocharger was already off and sitting on the workbench, there would be no extra labor to replace it.  Also, if it had died while we were driving, we would have had to be towed to a garage and had all the labor expense to replace it.  So while it is expensive, better now than later.

While the motorhome was in the shop, we drove down to Eugene to get some exercise with a walk around the University of Oregon.  We parked in one of the large, empty lots next to Autzen Stadium, where the Ducks play football. 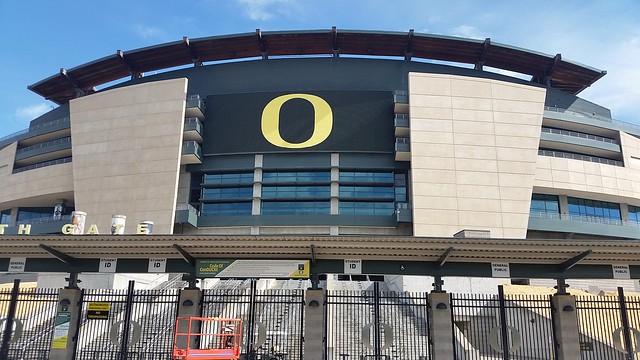 In front of the stadium is a sculpture made up of large Xs and Os, symbols used to diagram plays for a football team.  At the base of each is an inspirational saying, most related to football with many pertaining to leadership or character. 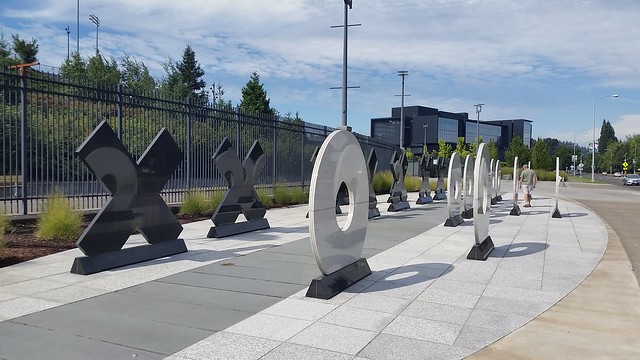 But some of the sayings have a bit of humor to them. 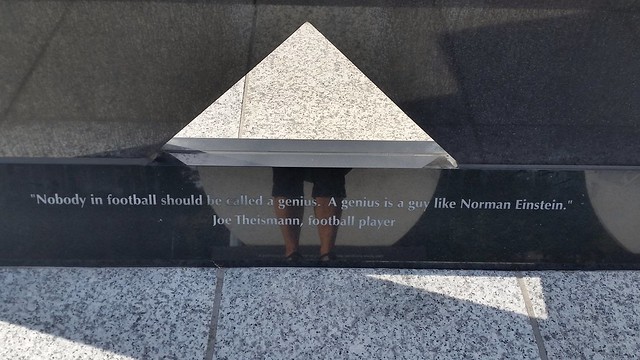 Between the stadium complex (there is also a baseball park and soccer stadium) and the main campus located to the south is Alton Baker Park, a large area filled with hiking and biking paths.  As we crossed a small stream going into the park we saw where the university gets its nickname. 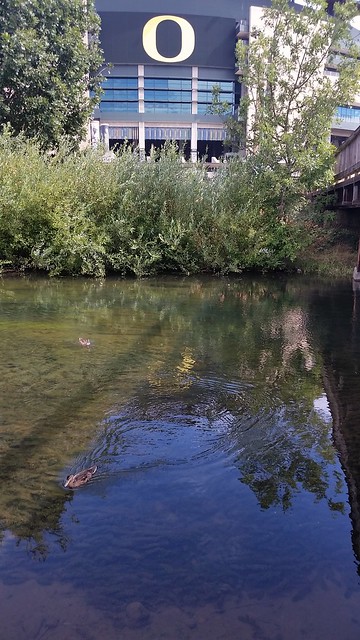 We walked through the park, crossed over the Willamette River, and entered the main campus of the University of Oregon. 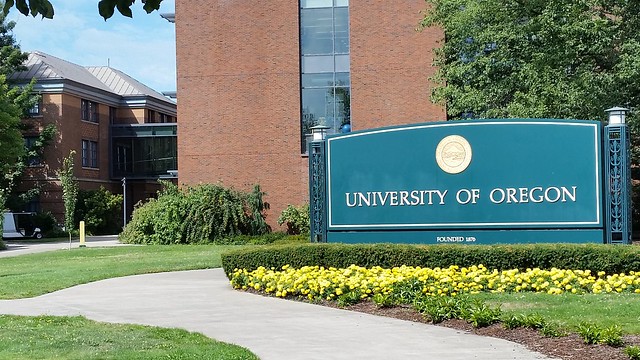 Another important sports venue is located right inside the main campus.  Hayward Field was at one time where the school played its home football games.  Built in 1919, it served as home to both the football and the track team until Autzen Stadium was completed in 1966.  Today it is one of the most recognized track and field facilities in the country. 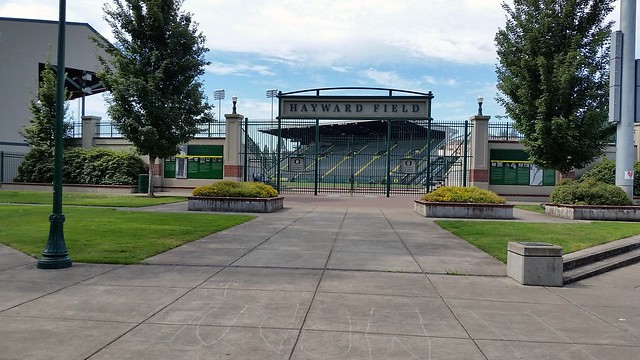 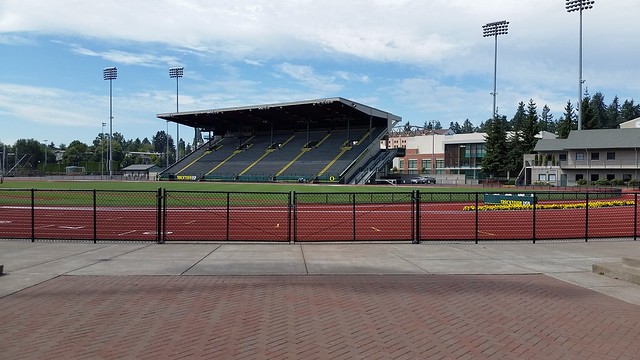 After our four mile walk we returned to the Cummins facility, where Andy informed us that a control unit necessary for the new fan assembly was not included in the shipping box.  He was not very happy about this as he had called the vendor and asked someone to check inside the box to be sure it was included before shipping.  When it was not there, he called the vendor again and got the same clerk back on the line.  He told Andy he though a small connection in the box was the controller, but it wasn’t.   Andy was very apologetic and assured us we would be ready to go the next day, as he had the part shipped overnight express.  The motorhome was able to be driven without the part so he had it parked in their customer area (water and electricity) so we wouldn’t have to spend another night in a hotel.  The part arrived just after noon on Thursday and the work was completed by mid-afternoon.  After we earned a boat load of frequent flyer miles paying the bill, we headed north to Portland, knowing that we would be going through the city at rush hour. 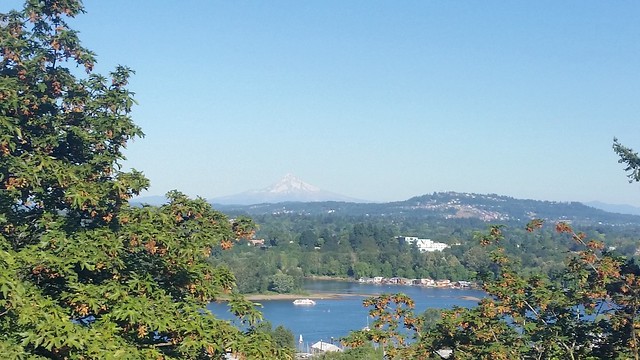 The Willamette River with Mt. Hood in the background (taken from I-5)

So we were not surprised when traffic came to a crawl as we entered the city limits.  It was bumper to bumper for the next 15 miles, but we just took our time while enjoying The Beatles Channel on Sirius/XM radio. 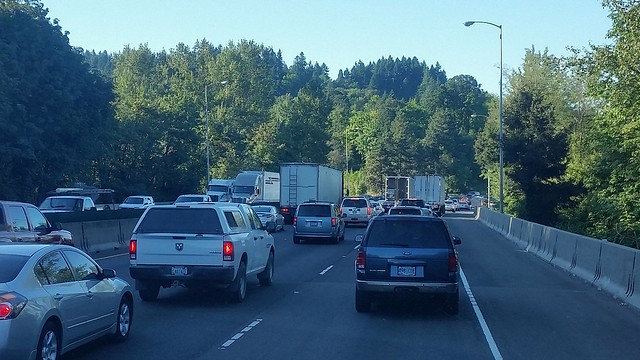 We finally arrived at our destination, Columbia River RV Park, and were greeted by a loud plane overhead as it took off from nearby Portland International Airport.  We knew the park was just west of the airport so the noise of the planes was not a surprise. 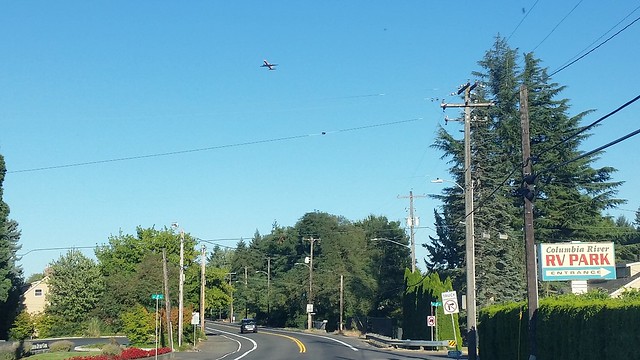 The sites in this park are a bit close together and the water pressure is pretty low, but the location is great, with easy access to the city as well as some hiking just to the east. 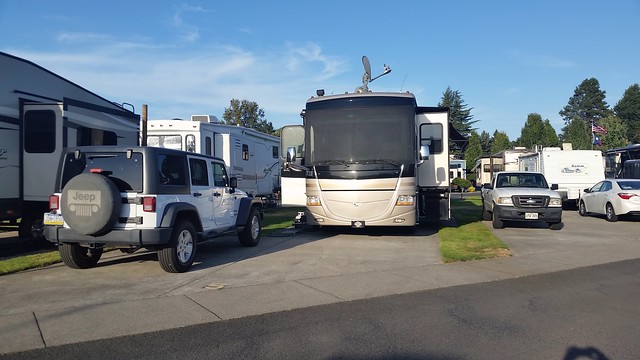 Traffic in Portland is insane, probably more than usual due to the upcoming eclipse.  So on Friday we avoided the roads and rode our bikes on the nice paved trail that runs along the nearby Columbia River.  We headed east on the path, taking us between the river and the airport. 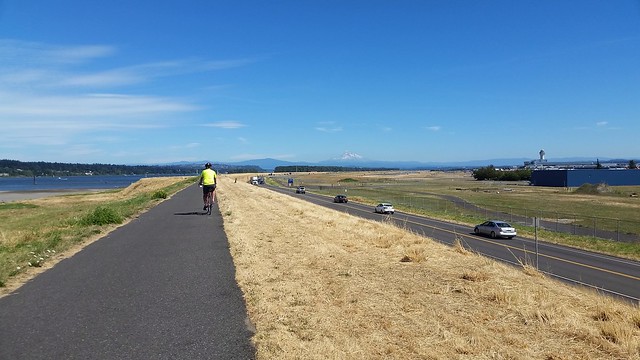 Columbia River on the left, Mt. Hood in the center, and control tower on the right 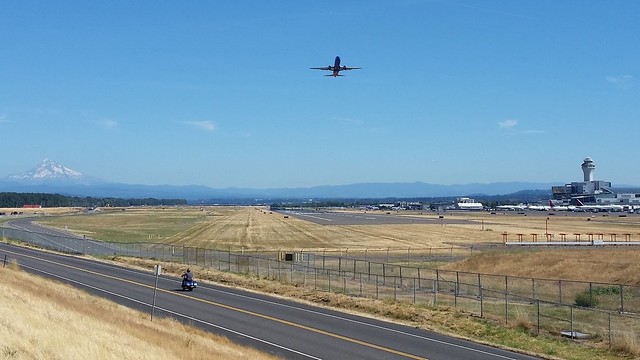 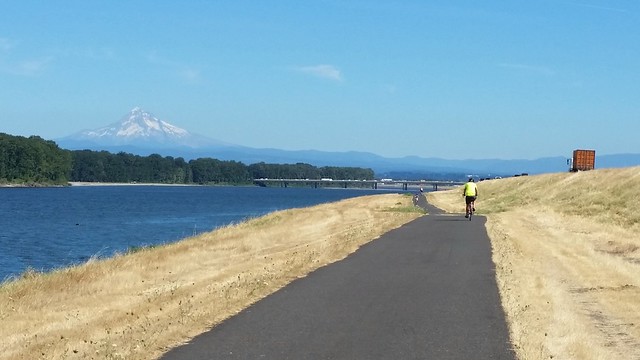 We rode the path for almost 10 miles before turning around next to a community of beautiful houseboats moored along the river at what is called a floating home marina. 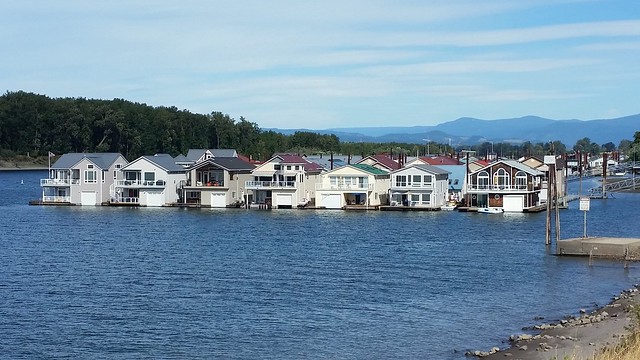 The ride back was right into the wind, which increased as we rode, making the trip a bit more challenging. 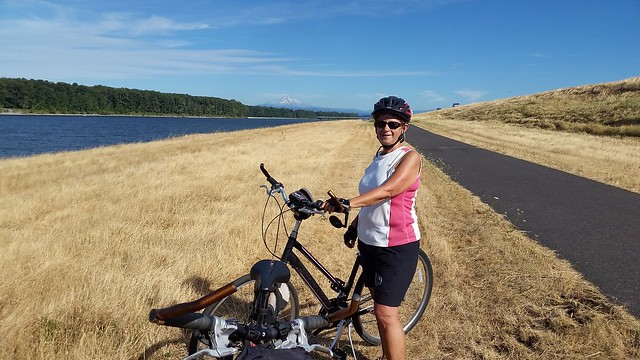 We’ll be here in Portland for the next week and have some trips into the city and hiking in the nearby Columbia River Gorge on our agenda so it should be a fun week.

28 Responses to Repairs Then on to Portland