On Thursday morning we left our dusty site at the Rock Springs KOA and headed east on I-80 for a drive of 230 miles to Casper.  After a hundred miles we exited the highway at Rawlins, WY and turned north on US-387.  About 50 miles from Rawlin US-387 makes a turn to the west, but we continued straight on to WY-220.  Fifty miles from Casper we pulled into Wyoming State Rest Area (that’s what it is called, maybe it’s the only one in the state!).  The rest area serves as a parking lot for Independent Rock State Historical Site. 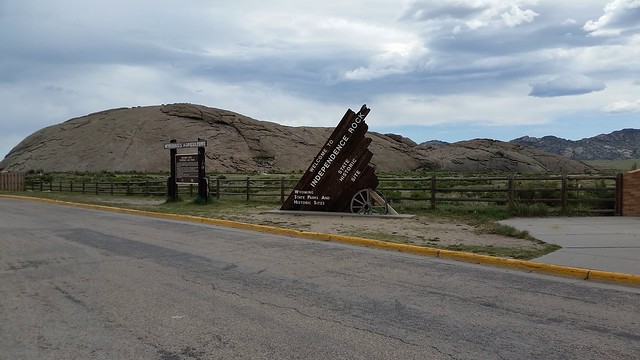 When Pam taught third grade they studied the pioneers crossing the continent on the Oregon Trail.  One of the most famous stops along the trail was here at Independence Rock.  Travelers knew that they needed to get to this spot by the beginning of July to insure they had time to get through the Sierra Nevada Mountains before the winter snow blocked the passes.  They planned to celebrate the Fourth of July near the rock, hence the name Independence Rock. 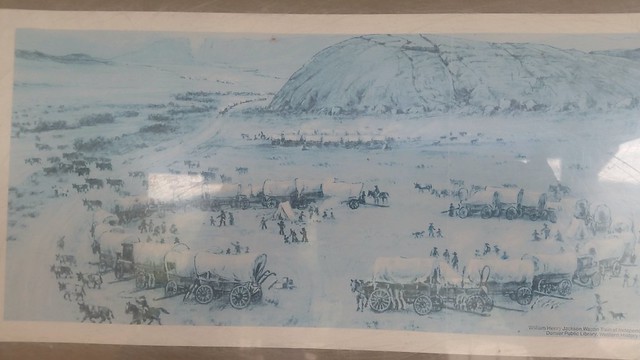 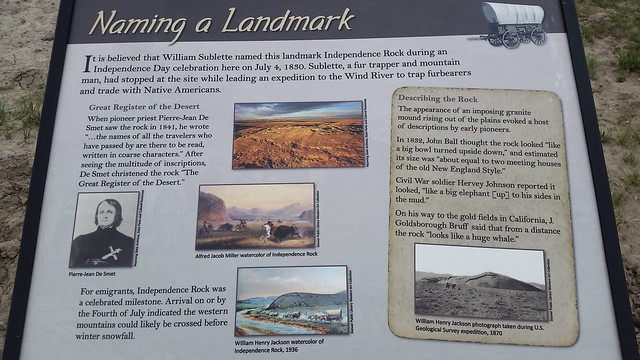 Over a period of more than 30 years up to the completion of the transcontinental railroad in 1869 almost a half million people passed this rock on their way to Utah (the Mormon Trail), California, and Oregon.  Since they only traveled through here in the early summer, the area around the rock was often quite crowded in early July.

One of the traditions of pioneer travelers was to carve their names into the rock as they past by.  Since many of these carvings are on the top we needed to climb up 136 feet to check them out. 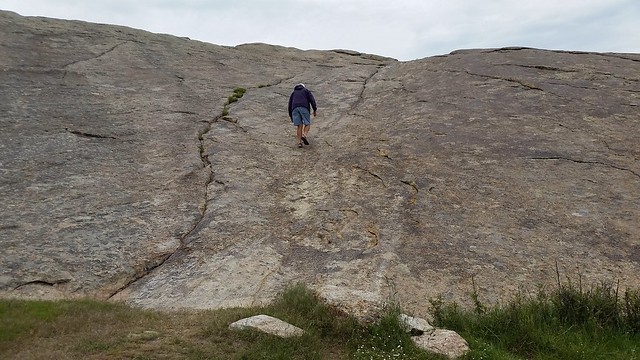 Heading up the rock 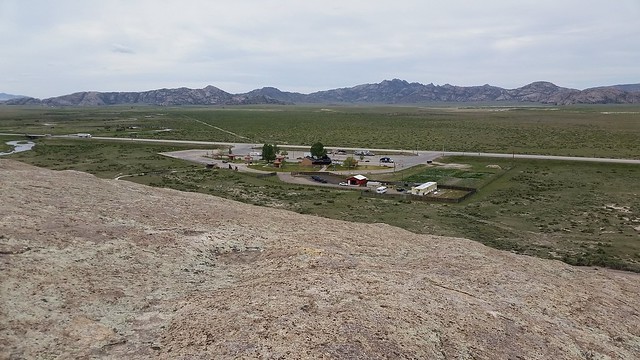 Looking down at the parking area from the top

Despite the high winds at the top we enjoyed seeing all the names spread over a large area.  Most were clearly from the time period of the great migration, while some were from more recent times. 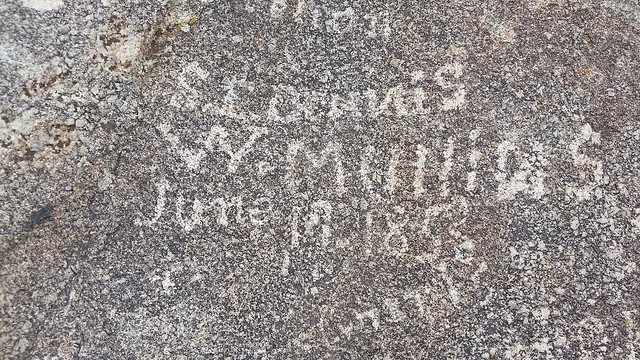 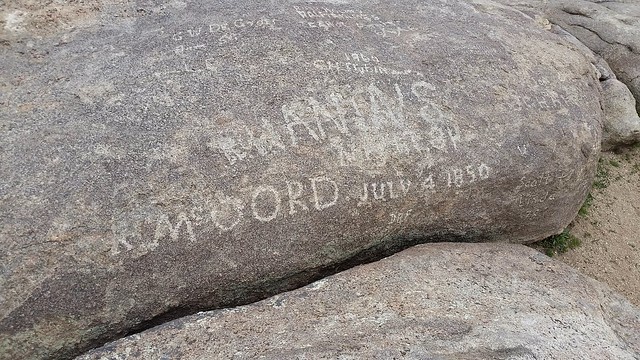 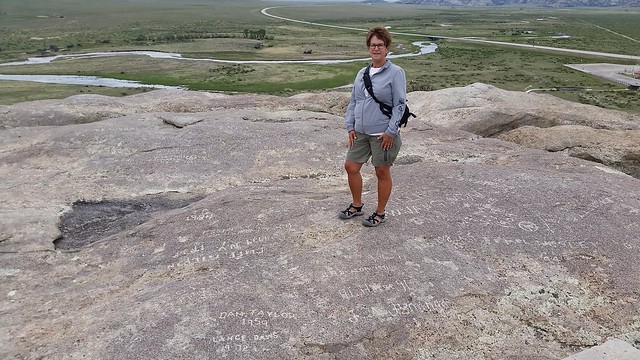 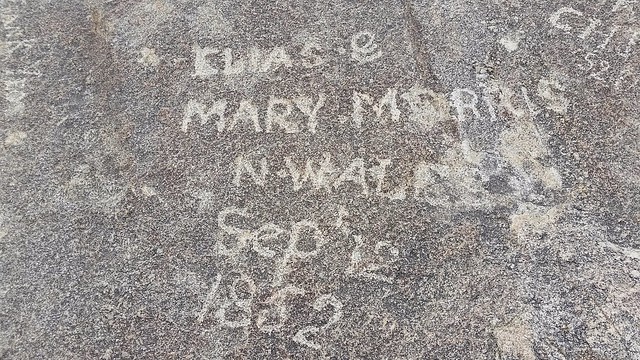 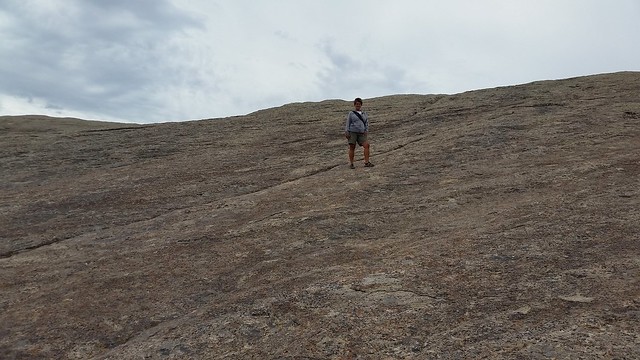 As we hiked the mile long trail around the rock we found large panels on the south side filled with names of travelers. 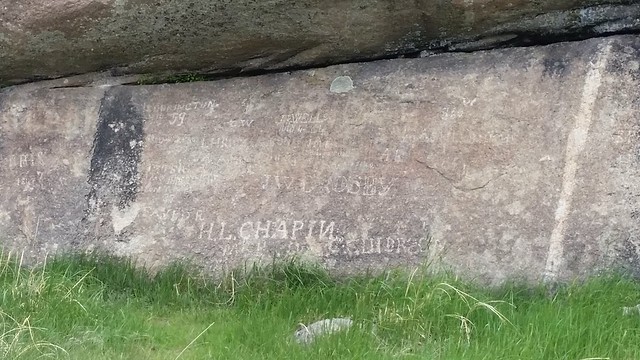 After enjoying lunch in the motorhome while parked in the rest area, we finished the lasts 50 miles of our journey to Casper.  We drove a few miles north of the city and took a site at the local KOA for four nights. 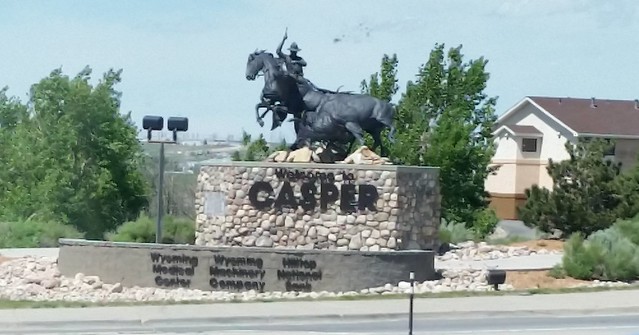 Casper is the second-largest city in Wyoming with a population of over 55,000 people. Only Cheyenne, the state capital, is larger.  Casper is nicknamed “The Oil City” and has a long history of oil boomtown and cowboy culture, dating back to the development of the nearby Salt Creek Oil Field.   The city was established east of the former site of Fort Caspar, which was built during the mid-1800s to protect telegraph and mail service.  In July 1865, Lieutenant Caspar Collins (the son of the commanding officer) was killed near the post by a group of Indian warriors. Three months later the garrison was renamed Fort Caspar after Lieutenant Collins.  The town is named Casper, instead of Caspar honoring the memory of Fort Caspar and Lt. Caspar Collins, because of a typo that occurred when the town’s name was officially registered.

Friday morning we headed into town for a stop at the Chamber of Commerce Visitor Center.  The young lady who greeted us was nice but really wasn’t very helpful.  She knew nothing about nearby hiking trails but said we would enjoy the bike trail that runs through town along the North Platte River.  Apparently she wasn’t aware of the high water in the river that covered much of the bike path, even though the path runs very close to the visitor center. 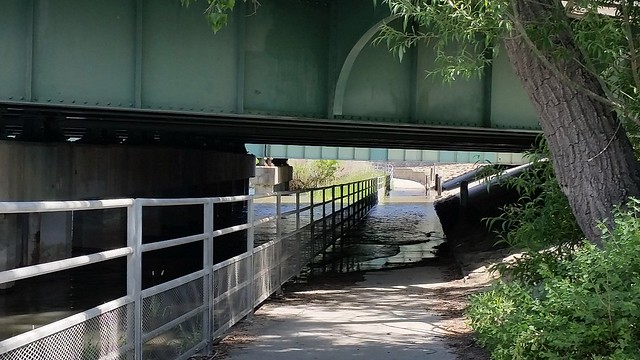 OK, riding the bike trail is out for this visit

One of the must-do activities in a visit to this area is a stop at the National Historic Trails Interpretive Center, located just a mile from the visitor center.  Casper is located near the spot where travelers heading west crossed the North Platte River, making it the perfect place to locate this facility.  The center is dedicated to educating visitors about the four groups of people who passed through the area including Mormons headed to Utah, gold-seekers heading to California, settlers heading to Oregon, and riders on the Pony Express. 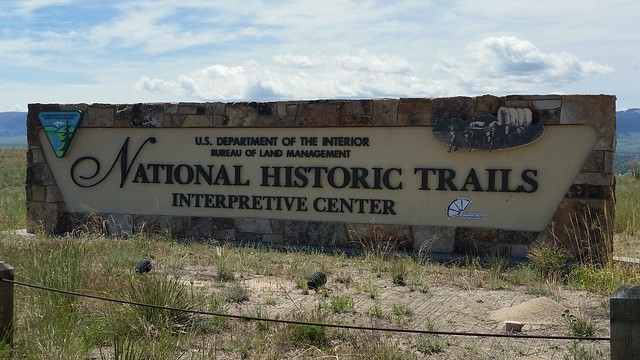 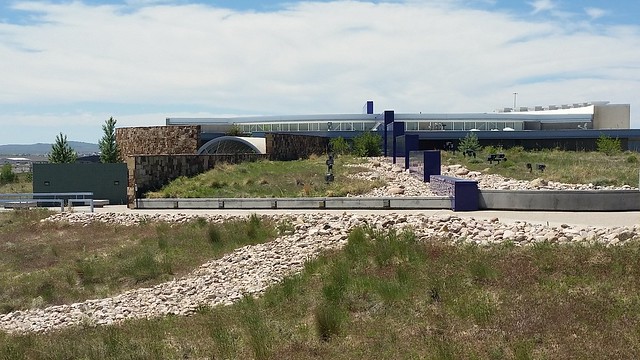 The center is built into a hillside overlooking the city 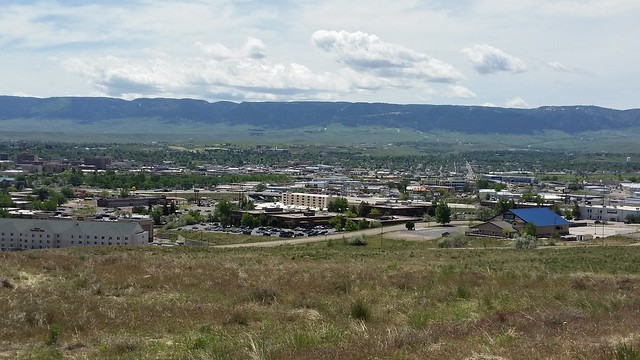 The view of Casper from the center

Displays in the center are very well done and appeal to adults as well as the many elementary students who tour the facility each year.  In the center of the building is a large amphitheater looking down at several large dioramas.  Above the dioramas are five large video screens.  The screens and dioramas are used in a multi-media presentation of life on the trail. 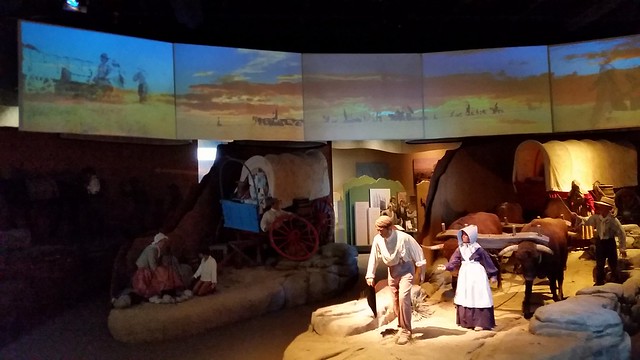 Surrounding the amphitheater are various displays and interactive exhibitions.  The coolest of these is a simulation of the crossing of the North Platte River in a covered wagon.  Sitting inside the wagon you look at a video in the front showing the view crossing the river while the wagon moves from side to side.  We imagine elementary students would love this experience (as we did!). 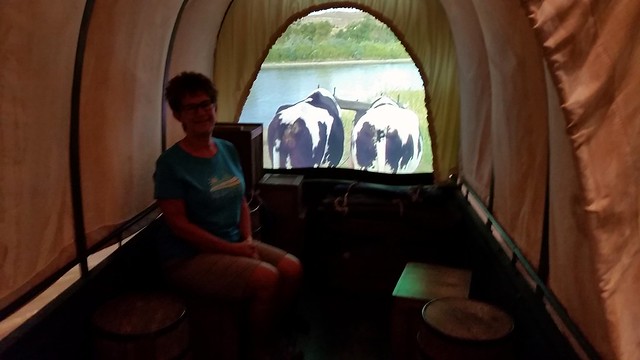 A young pioneer rides across the river – note the look of determination in her eyes! 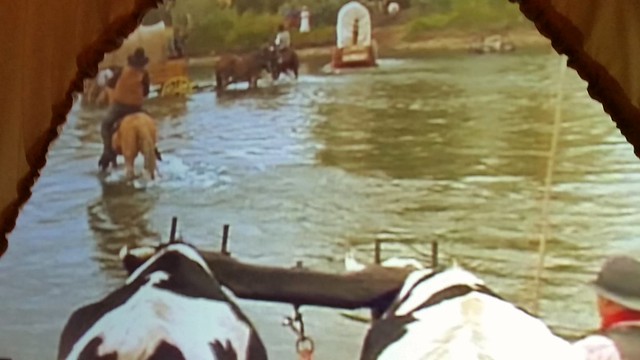 The view as the wagon enters the water

Following our visit to the interpretive center we drove south of the city and up into a long mountain ridge called Mount Casper.  At about 8,000′ of elevation Casper Mountain looms 3,000′ over the city. 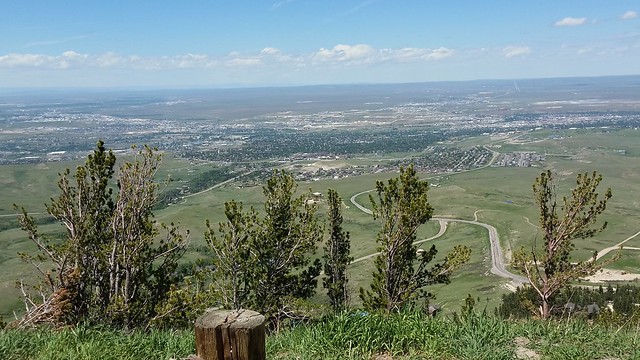 Looking down at Casper from about halfway up the mountain

The mountain is a popular recreation area and is used for hiking, mountain biking, nordic skiing and snowmobiling.  It even has a small downhill ski area. 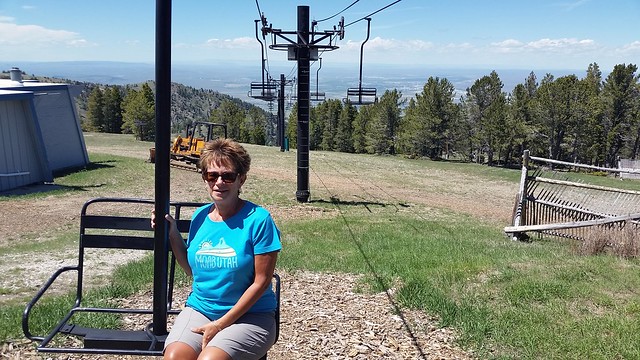 We have two more days to explore the area and the nimble hiker has been busy researching adventures, so our remaining time here should be pretty busy.

21 Responses to Heading to Casper