Posted on September 27, 2015 by placestheygo

We left the beautiful ski area of Park City, UT and continued west on I-80.  On the way through the Salt Lake City area we stopped at a truck repair shop to have the front end aligned.  While driving through Wyoming we noticed the outside of one of the front tires was showing excessive wear along the outer edge.  We had that tire replaced and both tires balanced at Les Schwab in Heber City, UT.  Schwab doesn’t have the equipment to do big vehicle alignments so we had it done at GCR Tire in West Valley City, UT.  They said the alignment was good but found a loose wheel bearing, which they felt was the cause of our tire wear.  After the alignment was completed we continued west along the south end of the Great Salt Lake. 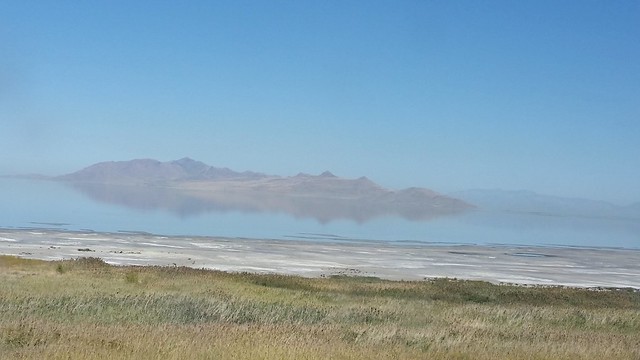 Mountains reflecting in the water of the Great Salt Lake 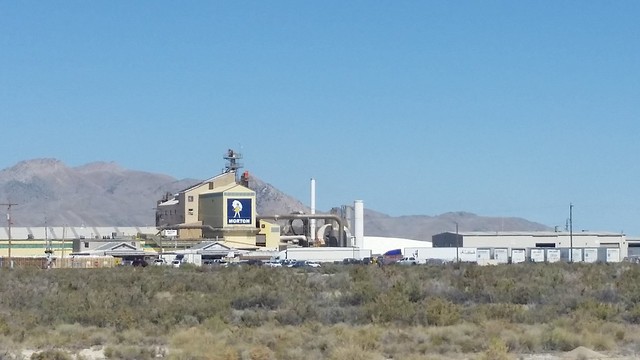 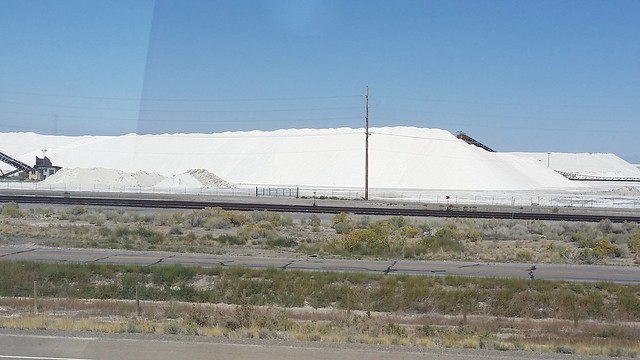 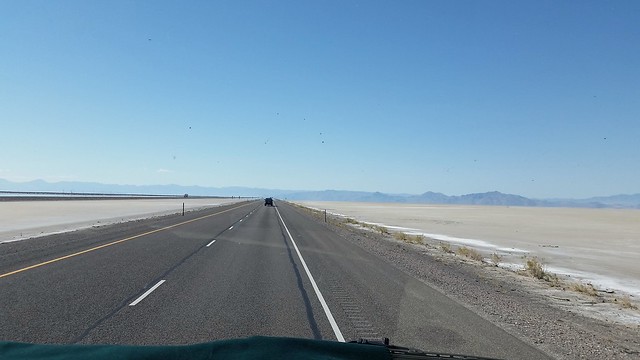 Through the salt flats 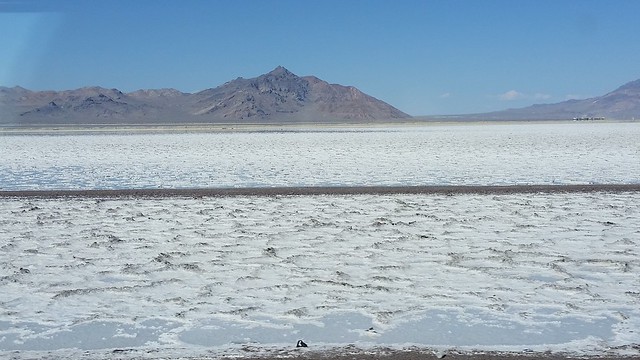 At times the salt looked like ice chunks on a lake 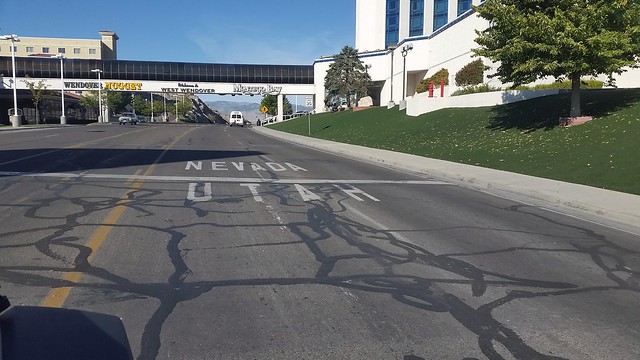 After enduring the cigarette smell while walking through one of the casinos to locate the Starbucks, we spent a quiet night in the local KOA, the only decent rv park in town. 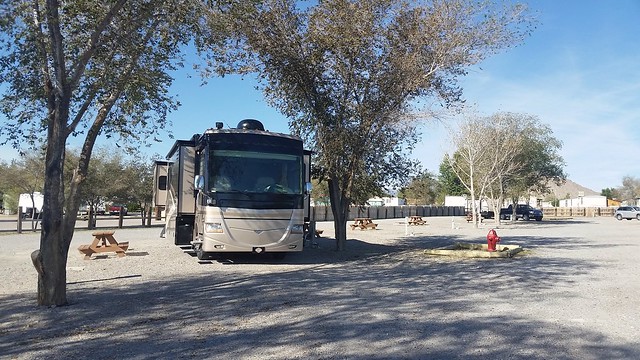 The next day we continued our journey westward.  Contrary to the myth that Nevada is all flat terrain, the scenery was quite interesting as we drove along the interstate. 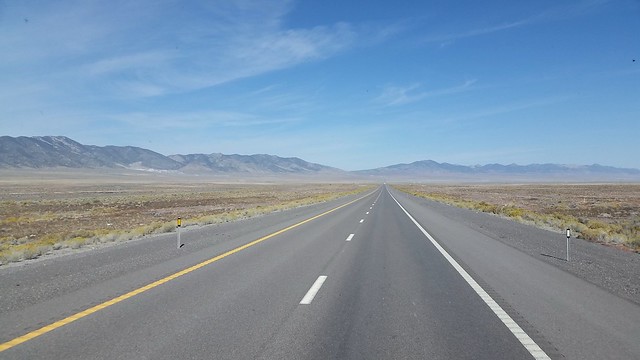 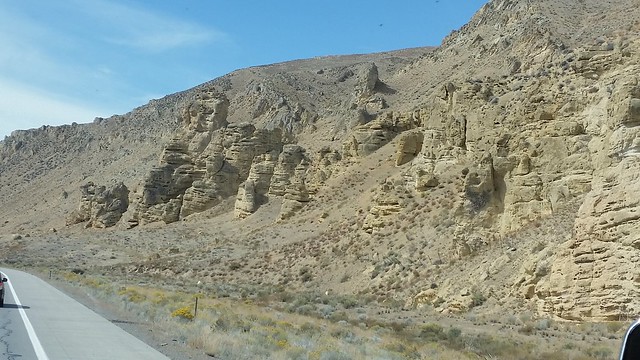 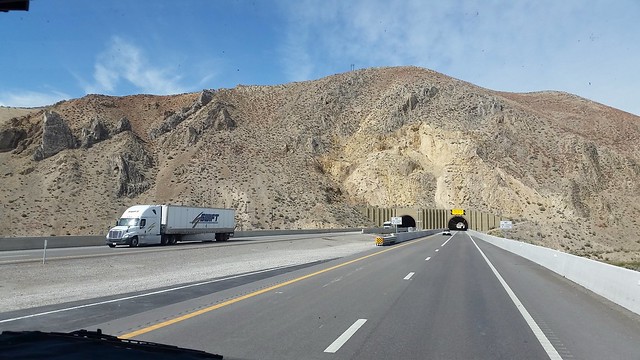 After a drive of about 230 miles we parked for the night in the New Frontier RV Park on the west side of the town of Winnemucca, NV.  Now you know that some vices illegal in most states are legal in Nevada, so Winnemucca has its share of casinos.  But we don’t like to gamble so we headed into town to see if there were other vices we could check out.  Turns out there is a vice for those who don’t gamble! 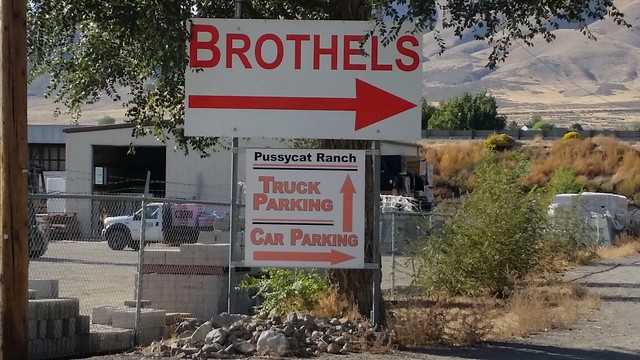 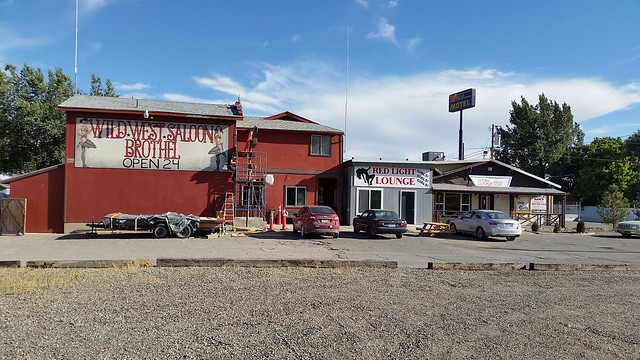 But the parking lot was very dusty and we didn’t want to get the Jeep dirty, so we passed on visiting this establishment.  Besides, we wanted to get back to the motorhome to enjoy a Nevada sunset! 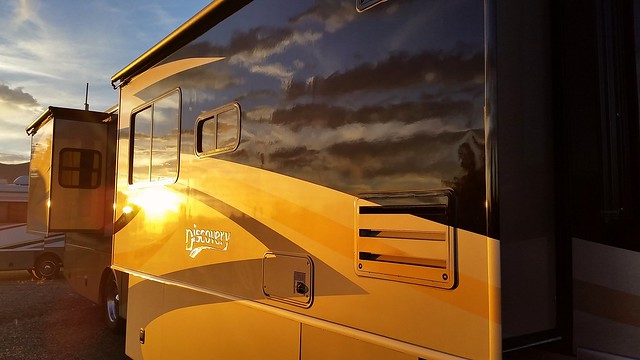 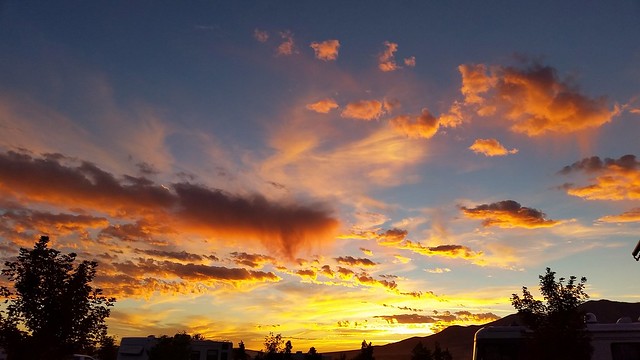 The next morning we continued our journey for another 170 miles to our destination, Carson City.  It seems that the front end alignment and wheel bearing adjustment didn’t cure our problems, they just moved to the other front wheel.  The problem is a mystery as for a time the front end will shake a bit, then for a while it rides smoothly.  Also, the tire on the other side is beginning to show a wear pattern on the outside.  So on our way into Carson City we stopped at Carson City Truck and Auto Repair, a shop that specializes in RV repairs.  John talked at length with the owner, who was very knowledgeable about alignments, and he is at a loss for a cause of our problem, especially since it is intermittent.  So Tuesday we’ll take the motorhome there to see if he can find the problem.  Until then we are comfortably set up at the Silver City RV Park.  RV pals Dave and Sue (Buluga’s Excellent Adventure) are headed this way and should arrive on Friday.  We will then join them for a ride south on scenic Rte. 395 down the east side of California.

37 Responses to Travelling Across Nevada