Posted on October 3, 2015 by placestheygo

One day during our stay here in Carson City we took a drive to check out some local scenes.  First stop was a visit to the state capitol in downtown Carson City.  The building was constructed between 1869 and 1871 and is listed in the National Register of Historic Places. 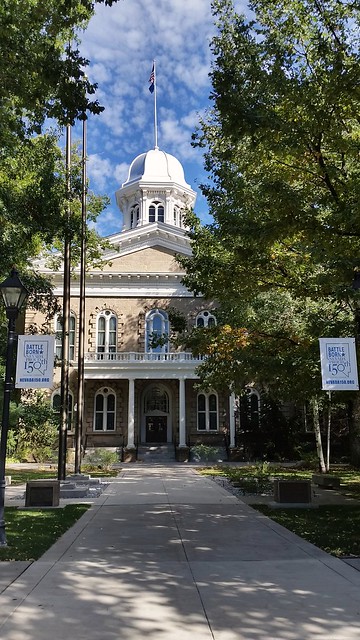 For more than 50 years, all three parts of the state government were housed in the Capitol. The Supreme Court met here until 1937, when it relocated into an adjacent building, and the Nevada Legislature met here until 1971, when it relocated to its new Legislative Building just south of the Capitol.  Every Nevada governor except the first has had his office in the capitol.  Today the Capitol continues to serve the Governor and other state offices. 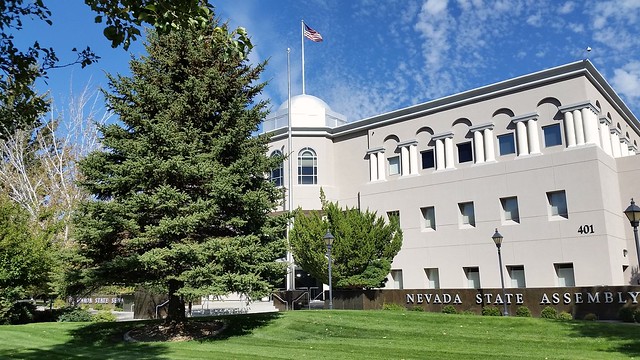 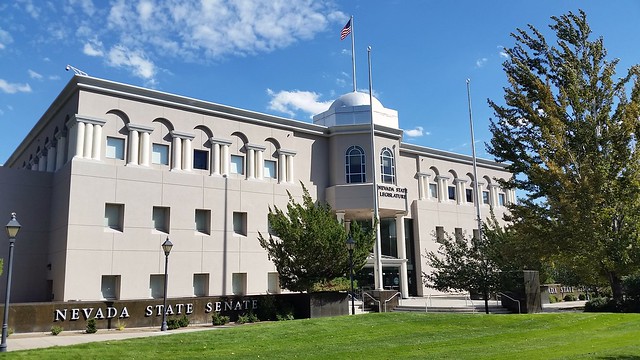 The capitol area in Carson City is the smallest capitol area we have seen in our travels, something we think is a good thing.  As we drove down the main street in front of the Legislature Building we had to stop to allow a few locals to cross the street. 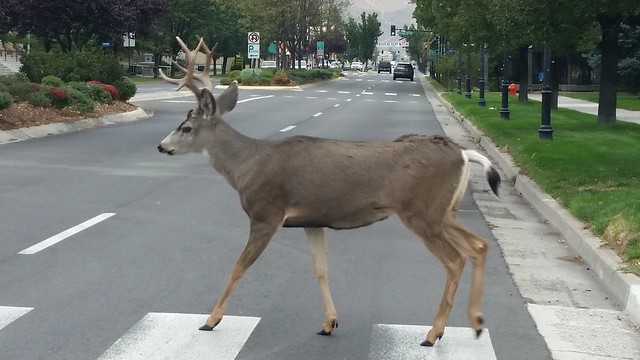 We then headed east on US-50 for a few miles before turning north on NV-341 for a visit to the old mining town of Virginia City.

Virginia City sprang up as a boomtown with the 1859 discovery of the Comstock Lode, the first major silver deposit discovery in the United States.  At the city’s peak of population in the mid-1860s, it had an estimated 25,000 residents. The mines’ output declined after 1878 and the city declined.  As of 2010 Census the population of Virginia City was about 855.  Today the main industry of the town is tourism. 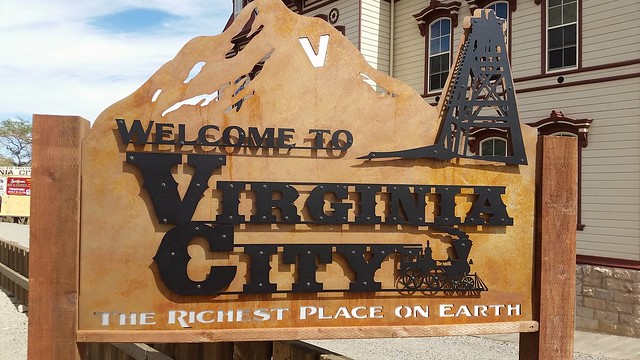 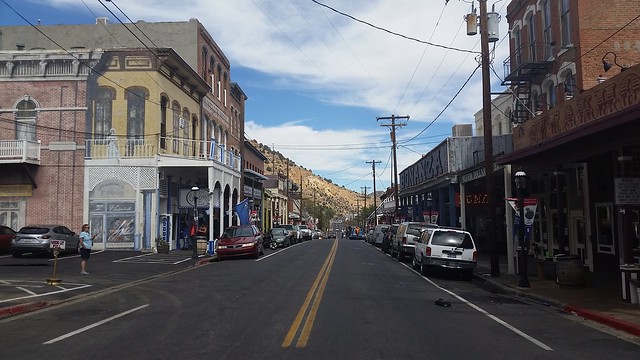 Tourism grew tremendously in the 1960s due to the popular TV series Bonanza.  The Ponderosa Ranch was located near the town and the Cartwrights visited Virginia City regularly.  People flocked to Virginia City to see the town made famous by the show.  The only problem was that The Virginia City depicted on Bonanza was located in a studio in Hollywood. 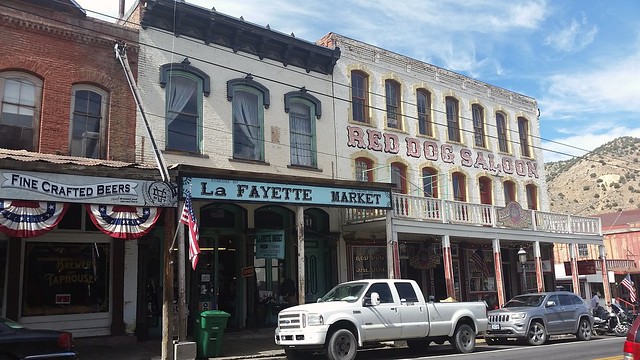 Virginia City could be considered the “birthplace” of Mark Twain, as it was here in 1863 that writer Samuel Clemens, then a reporter on the local Territorial Enterprise newspaper, first used his famous pen name.  Clemens lived in Virginia City and wrote for the Enterprise from late fall 1862 until May 1864, when he escaped from a potential duel instigated by a local newspaper editor upset at Clemens’ reporting. 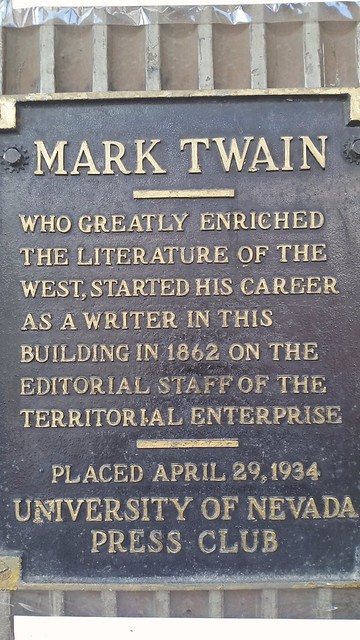 The Fourth Ward School is a restored building on the south end of C Street.  When constructed in 1876 it was one of eleven schools in town and housed 1100 students in grades 1 through 12.  It graduated its last class in 1936, after which its students were moved to a new school built by the WPA, one of FDRs New Deal programs.  The building then fell into disrepair and remained closed until 1986 when it was reopened as the Historic Fourth Ward School Museum. 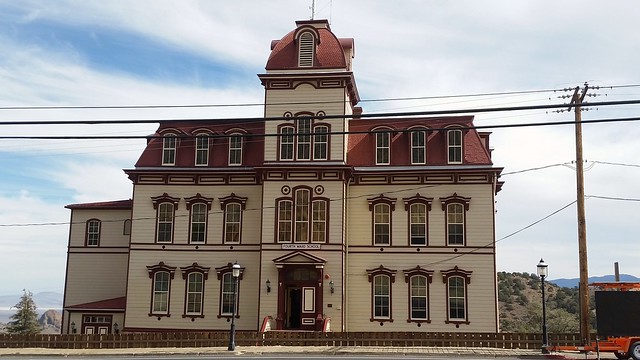 Leaving Virginia City we continued north on NV-341 as it twisted and turned on the way to the Reno area. 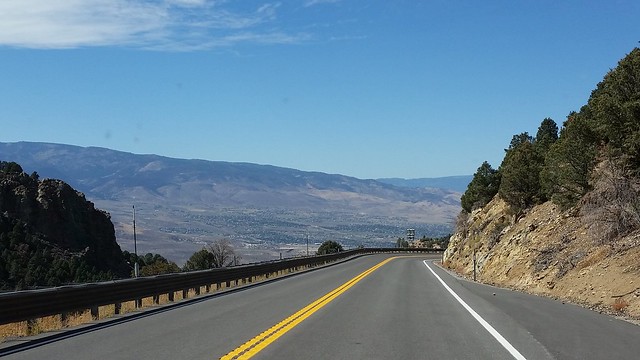 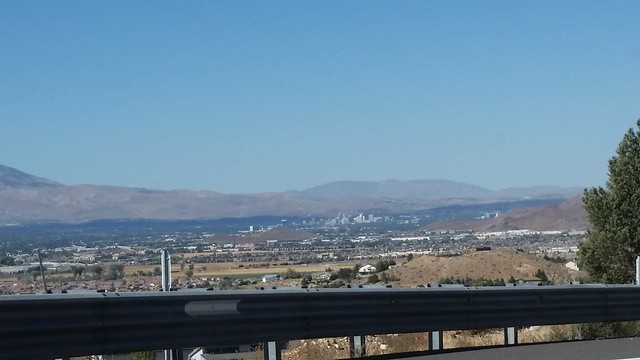 We had no plans to spend any time in Reno, but we did want to go through the casino area and drive under the iconic Reno Arch. 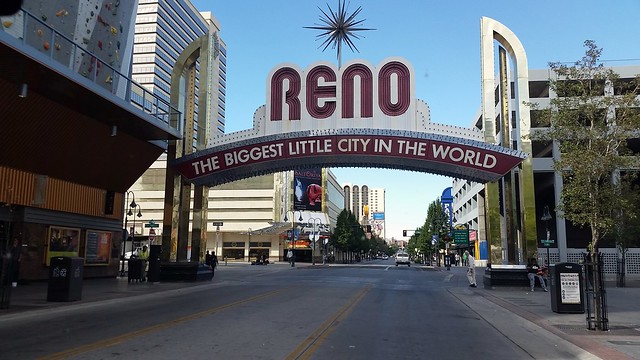 The original arch was built in 1926 to commemorate the completion of the Lincoln and Victory Highways.  The current arch was installed in 1987 and retrofitted with new lights in 2009.

By the way, in our last blog we described a problem with the front end of the motorhome.  While crossing Wyoming we notice excessive wear along the outside of the left front tire.  We had the tire replaced at Les Schwab in Heber City, UT and both tires were balanced. Once that tire was replaced the front end developed a shake, so we stopped at GCR Tire near Salt Lake City and had the motorhome aligned.  They said the alignment was good but a wheel bearing was loose, which they corrected.   But as we traveled across Utah and into Nevada the shaking continued and the right front tire began to wear on the outside edge, just like what had happened to the left tire.  At Carson City Truck and Auto Repair, a shop that specializes in motorhomes, the right front tire was replace, both tires were re-balanced, the alignment was re-checked, all steering components were examined, and the front shocks were replaced.  Things seem to be better but there is still an intermittent shake in the steering wheel at speeds above 55 mph (although less severe than before).  So now we’ll just keep an eye on the tires as we head south next week.

We have done a bit of hiking while here that we will share in our next post.  More on that later . . .

11 Responses to Checking out Carson City, Virginia City, and Reno