We left Cheyenne and headed west on I-80 for one of the shortest moves we have ever made.  It’s only about fifty miles to Laramie, our next destination.  The highway basically follows the path of the original transcontinental railroad as it slowly gains elevation.  After about thirty-five miles we reached Sherman Pass, the highest point on I-80 between New York and San Francisco at about 8,800 feet.  A rest area/visitor center is located at the summit.  The area is dominated by Lincoln Memorial Monument, a bust of Abraham Lincoln twelve feet high and resting on a thirty foot high granite pedestal.  The monument is in recognition of Lincoln’s signing of the legislation that lead to the building of the transcontinental railroad. 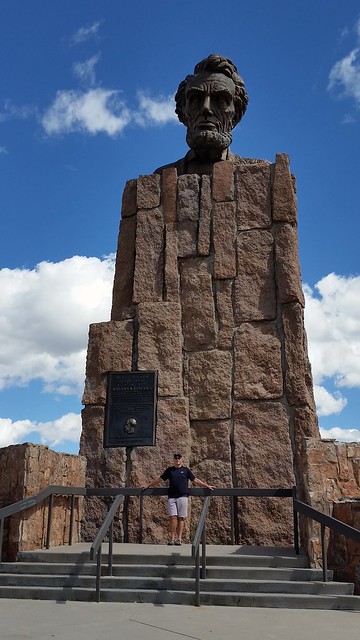 Below is a photo looking east from the visitor center.  Its difficult to believe you are at an elevation of just under 9,000 feet when you see the flat terrain.  West of the visitor center the highway goes steeply down hill for about fifteen miles to Laramie at 7,200 feet. 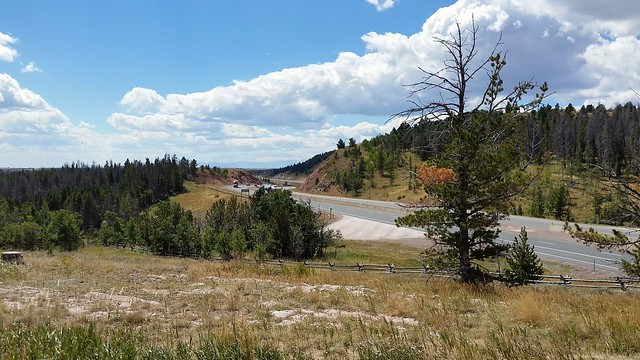 We drove on to Laramie where we set up at the Laramie KOA.  It’s a pretty basic, over-priced park but there’s little to chose in the Laramie area.  The next morning we headed back east on the interstate past Sherman Summit to do some hiking in the Medicine Bow National Forest.  But first, since it was near the same exit as the national forest, we made a visit to the Ames Monument. 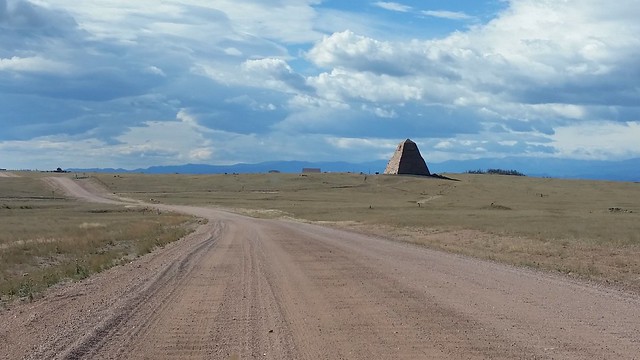 Completed in 1880, the monument is dedicated to brothers Oakes Ames and Oliver Ames, Jr., Union Pacific Railroad financiers. The brothers are credited with financing and completing the transcontinental railroad in 1869.  The Ames Monument marked the highest point on the transcontinental railroad at 8,247 feet.  But the railroad relocated the tracks further south to avoid deep snow , so there are no tracks nearby today. 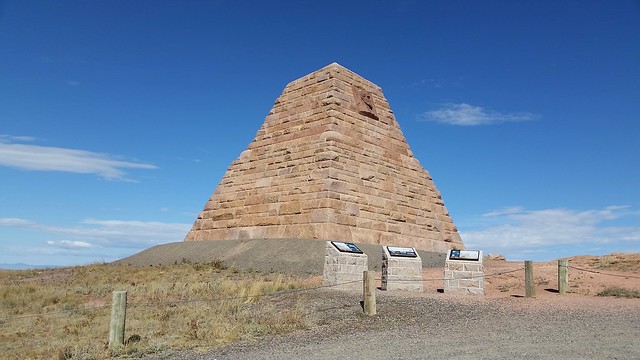 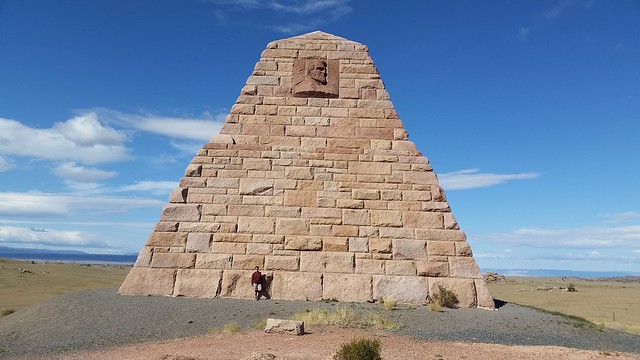 We left the monument and drove just a few miles to the Vedauwoo Campground and found the trailhead for the Turtle Rock Trail.  The trail is three miles in length at 8500 ft. and circles the large outcropping known as Turtle Rock. 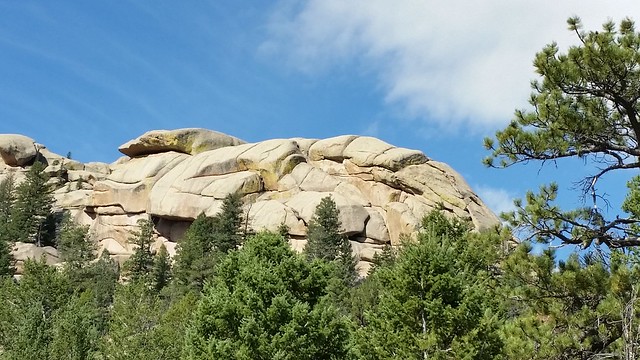 Turtle Rock (John doesn’t see a turtle, do you?) 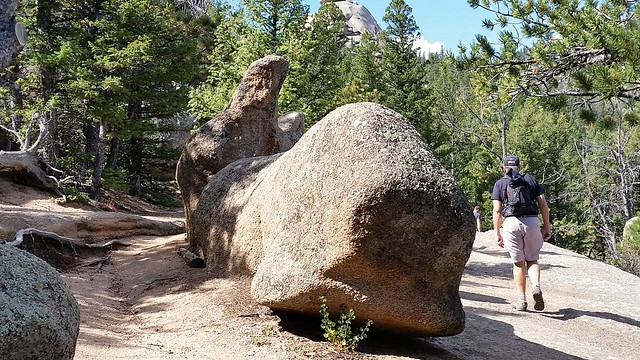 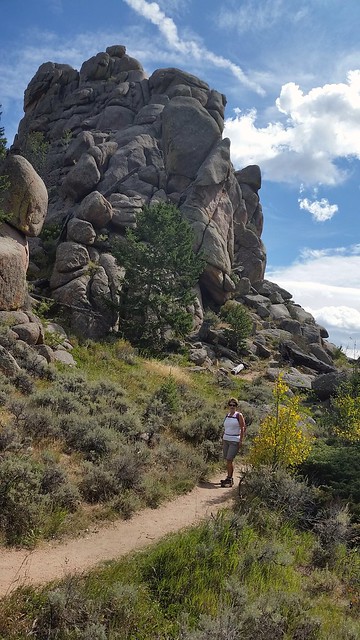 One side of the rock is a popular site for rock climbers.  See the climbers in the photo below? 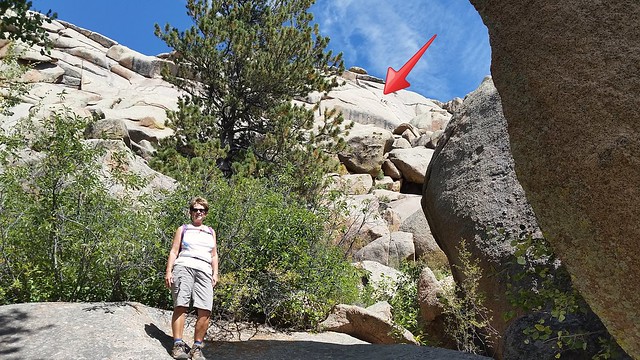 A zoom shot will help you. 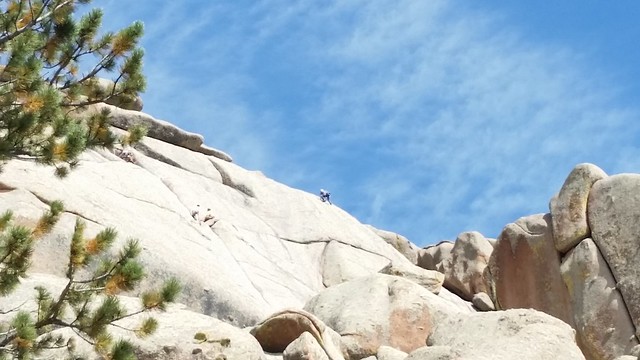 After our hike around Turtle Rock we drove back to Laramie and stopped at the restored Wyoming Territorial Prison Historical Site. 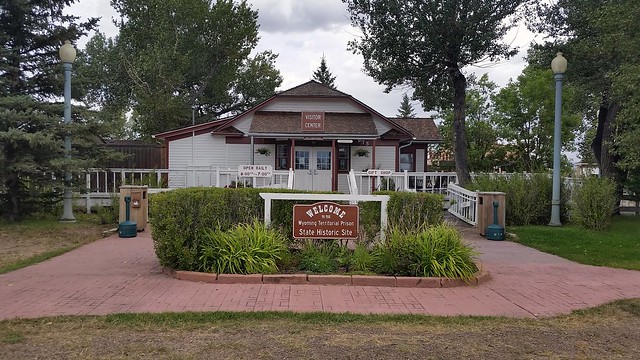 Built in 1872 it is one of the oldest buildings in Wyoming.  It operated as a federal penitentiary from 1872 to 1890, and as a state prison from 1890 to 1901.  It was then transferred to the University of Wyoming and was used as an agricultural experiment station until 1989. In 1991 the facility was opened to the public, and in 2004 was designated as Wyoming Territorial Prison State Historic Site. 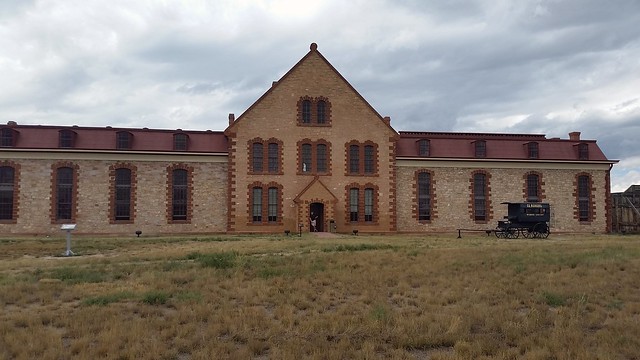 The front of the prison 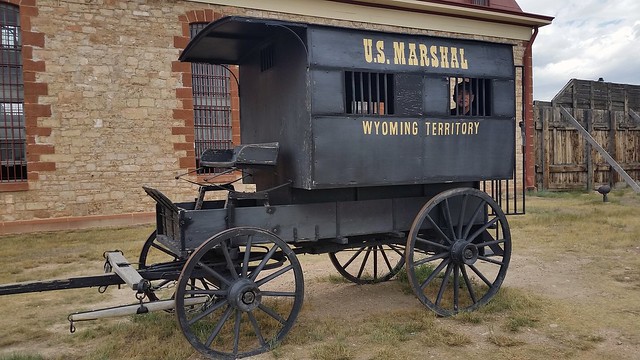 Is that a dummy in the wagon?

The prison followed a penal system of the time called the Auburn System.  It was a bit harsh by today’s standards.  The the main rule is shown below. 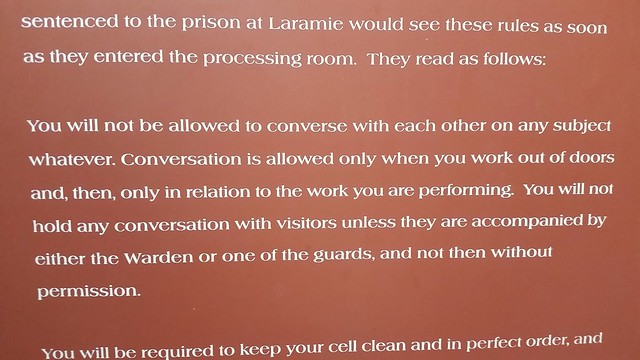 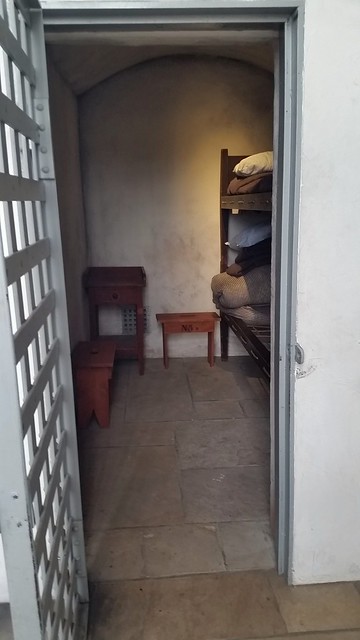 The most famous prisoner was a Mormon from Utah named Robert Leroy Parker who was incarcerated for eighteen months after buying a horse he knew to be stolen.  Apparently the stay in prison didn’t reform him as he went on to be a famous bank robber under the assumed name of Butch Cassidy. 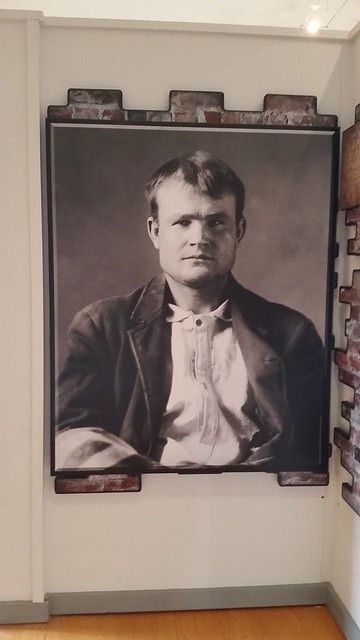 Later we drove across town (not far, it’s a small town) to visit the campus of the University of Wyoming. 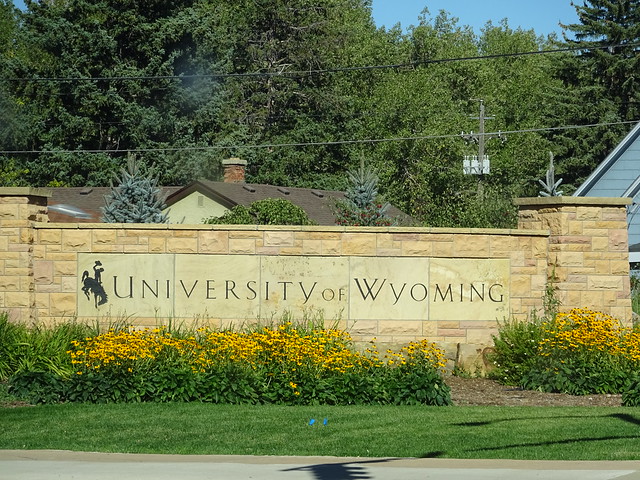 The school has a beautiful campus on the east side of the city.  The center of the campus is a quad area called Prexy’s Pasture.  The name is attributed to an obscure rule that the university president, or “prexy”, is given exclusive use of the area for livestock grazing.  No cattle were present during our visit. 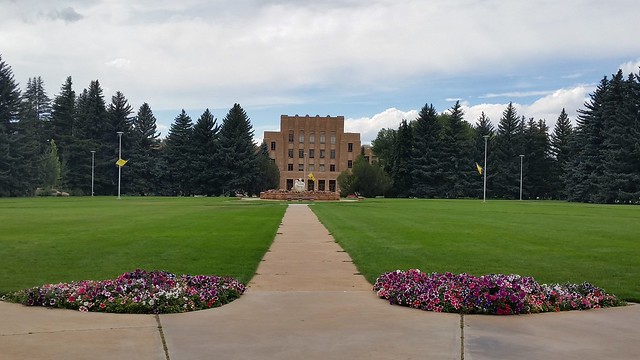 The school’s nickname is the Cowboys and a large stature of  the Bucking Horse and Rider, the registered trademark of the state of Wyoming (it’s on their license plates) is located in front of the Arena-Auditorium, their indoor arena on campus. 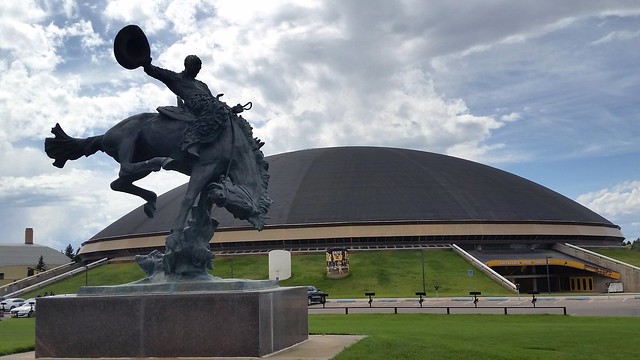 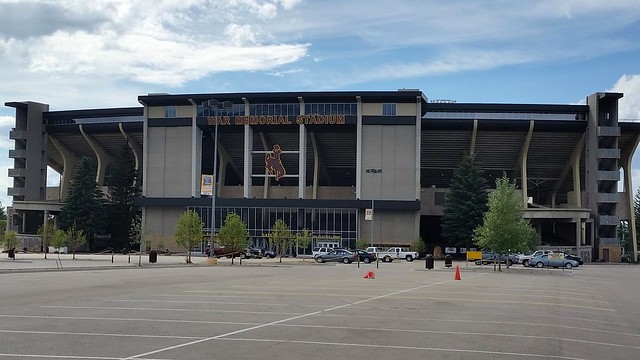 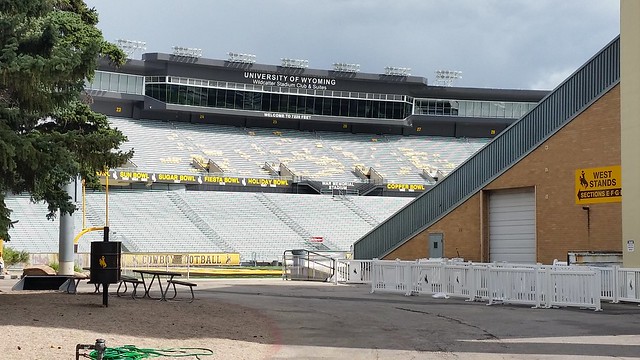 Whew, that was a busy day!  Fortunately there is one of those Seattle-based coffee shops in town so we had a place to rest after our busy schedule.  We have one more day in the area and the nimble hiker has a hike planned.  Look for that in the next blog, which will be creatively titled “Laramie, WY – Part 2.”