Earlier this week, while David and Karen were on a ranger-led hike through the Fiery Furnace (we did that hike during our last visit), we decided to check out a few arches we had not yet visited.  We drove in to Arches NP and parked at the trailhead for the Sand Dune Arch. 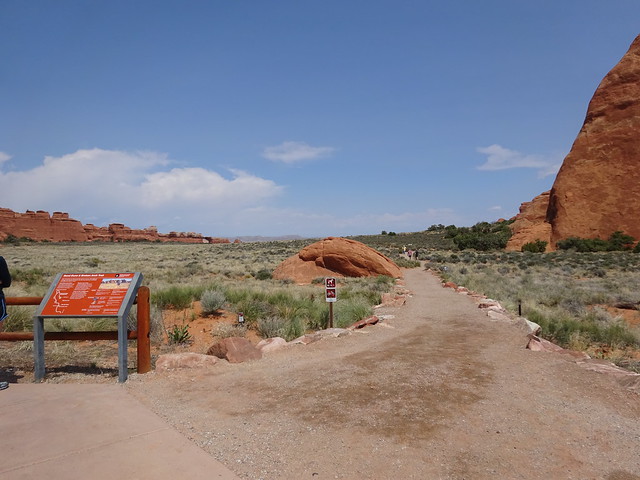 This arch is very popular as it is a very short “hike” from the parking area and the trail leads through an interesting short slot area. 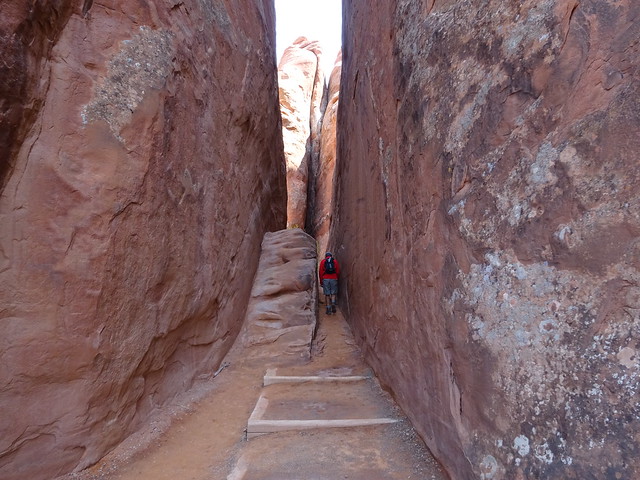 The Sand Dune Arch is not very large compared to many others in the park, but it is beautiful with the sun shining on the colorful rocks surrounding it. 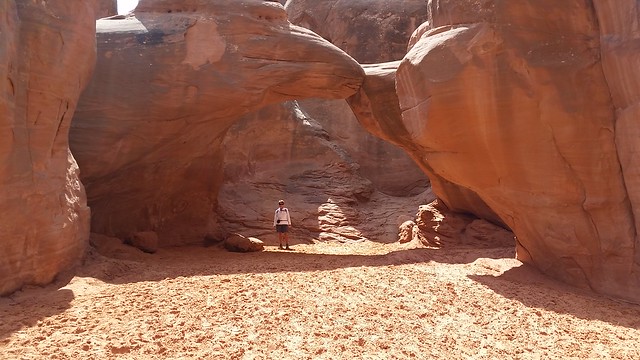 From the Sand Dune Arch,  a half mile hike across a flat plain takes you to the next arch, The Broken Arch. 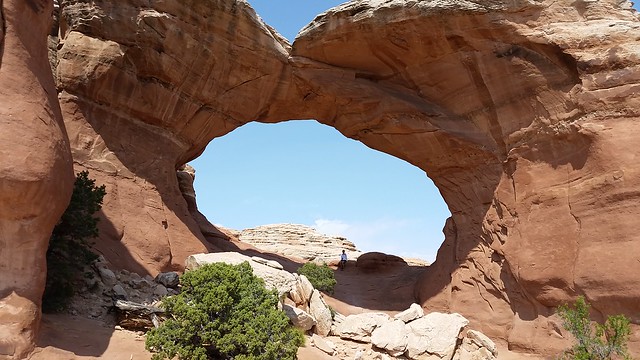 The trail leads right through this arch, so you get to see it from two distinctly different perspectives. 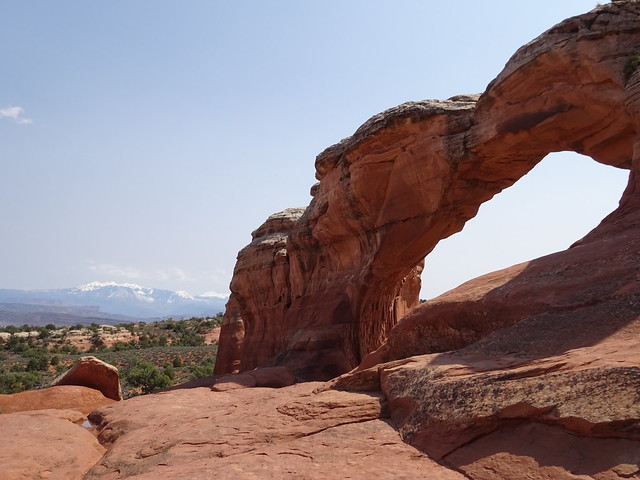 We continued on the trail knowing that it makes a loop going through the park campground.  In the distance we could see another arch that was not named our the park map from two years ago but is now.  It looked to be miles away from where we were, but turned out to only be about a half mile away. 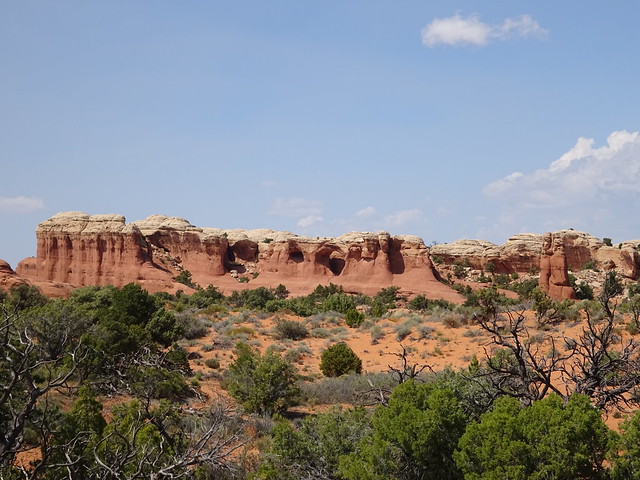 A short trail led about 300 yards to what turned out to be the Tapestry Arch. 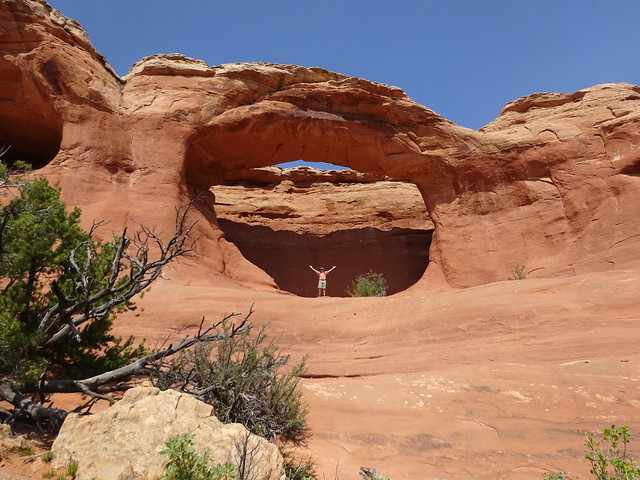 We returned to the main trail and looped through the campground into a short but interesting area through a couple of cool slots. 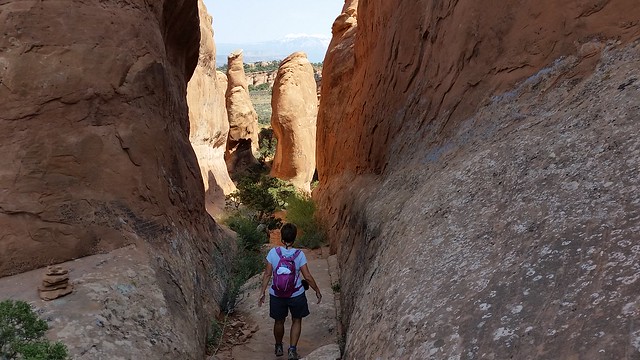 Last week we stopped in the Arches NP visitor center and asked a ranger if there were any interesting things to see that were away from the usual sites filled with people.  One of his suggestions was a visit to the Eye of the Whale Arch, accessible only by a four wheel drive vehicle or by a two mile hike up a rough dirt road.  The road is too rough for most visitors and not rough enough for the hard core “Jeepers” who frequent the area so not many people visit this arch.

To get to the arch we turned on to a dirt road right across from the parking area for the Balanced Rock.  This is a well-maintained dirt road for the first few miles that will eventually exit the park and take you to the main highway (191) that goes through Moab.  About a mile up that road we turned right on to another dirt road, one that is not maintained and is marked for four-wheel drive vehicles only. 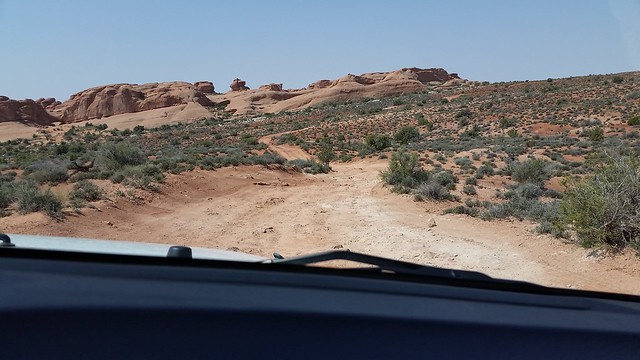 We agree with the necessity of a four-wheel drive high clearance vehicle, as this road is a bit rough.  After about two miles we came to a small parking area with the Eye of a Whale Arch in the distance.  The ranger was correct about the infrequency of visitors to this arch as we had the entire place to ourselves. 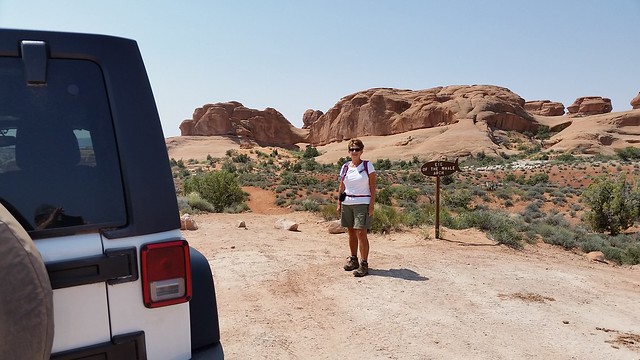 A short easy trail leads right up to the base of the arch.  The ranger had told us that the arch does not look like an eye from this side, so we decided to hike through it to get the better vantage point. 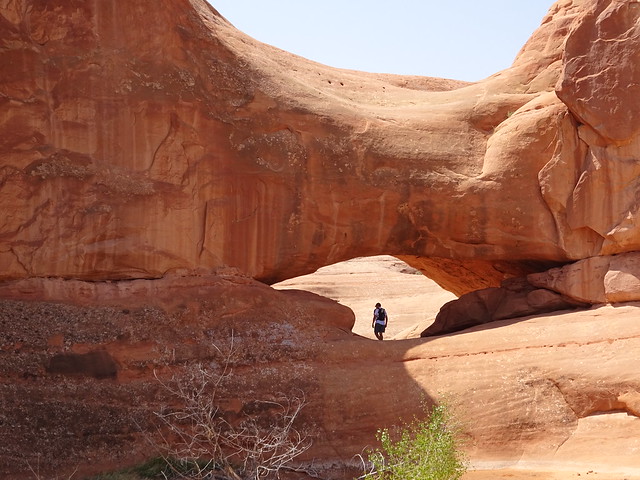 The climb up into the arch was pretty easy, but the climb down the other side required a bit of crab walking down the slick rock. 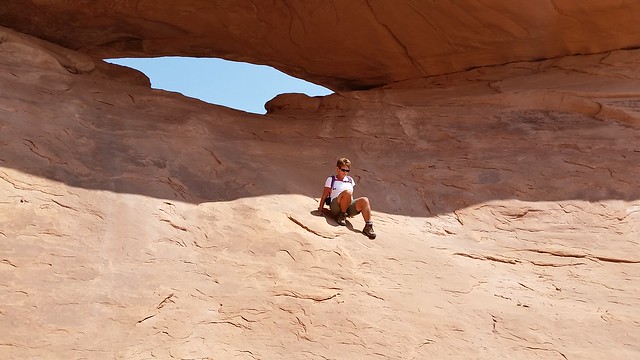 The ranger was definitely correct, as from the other side the arch does have a resemblance to an eye (complete with an eyebrow), although we couldn’t see the resemblance to a whale. 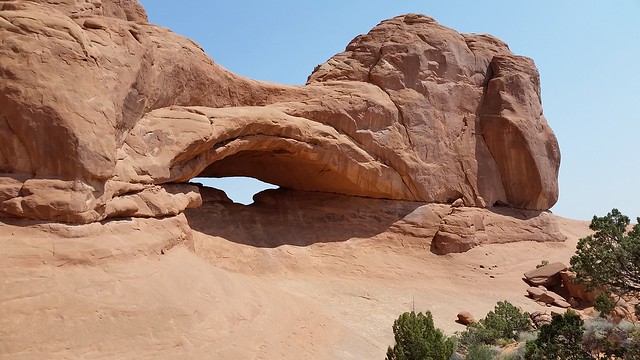 After exploring the rocks around the arch we returned to the Jeep and headed back down the road.  Pictures never adequately show the twists and turns of the terrain, but the three pictures below may give an idea as to what we drove through. 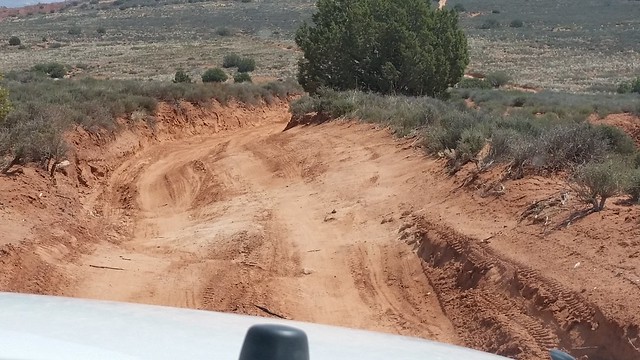 Winding through the sand 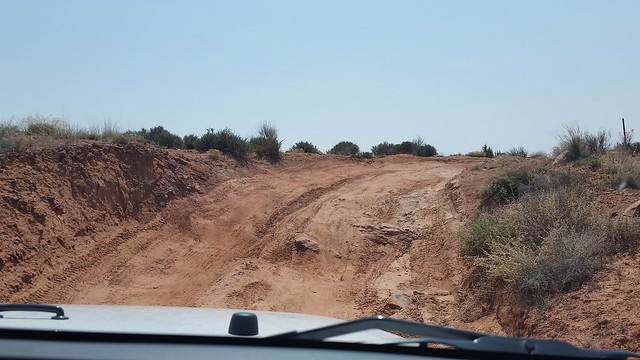 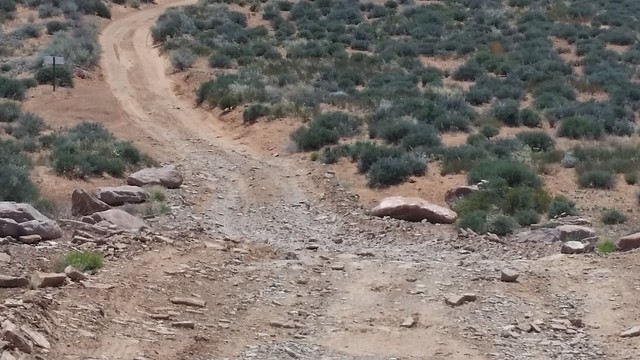 Returning back to the maintained dirt road, we turned right and headed west toward where the road exits the national park property.  Along the way we could see the Eye of the Whale Arch to our north.  From this distance we could see a slight resemblance to a whale. 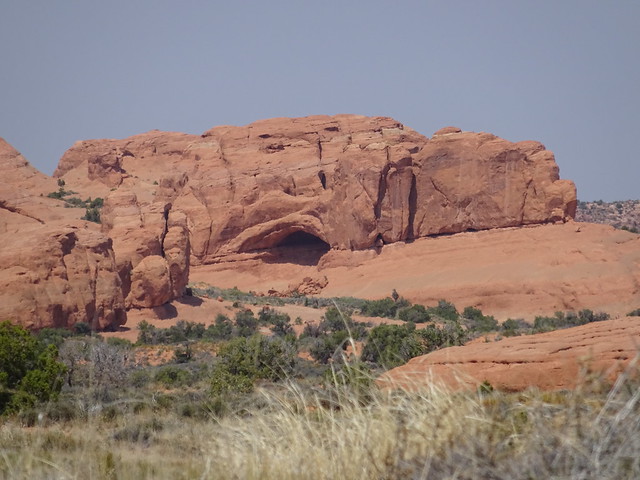 Signs for this road state that four-wheel high clearance is “recommended.”  We would change that to “needed” as it was quite rough in a number of spots.  Four miles to the west we passed a sign indicating the boundary of the national park.  There is no entrance station here so if you are willing to drive eight miles over some rough terrain you can avoid the entrance fee for Arches! 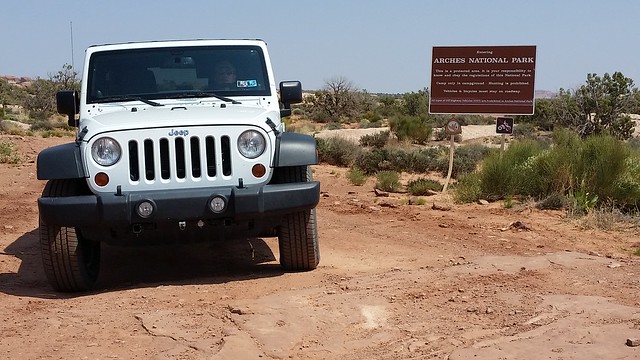 We were on this road because the ranger had told us about a display of dinosaur tracks by the road on public land just outside the park boundary. 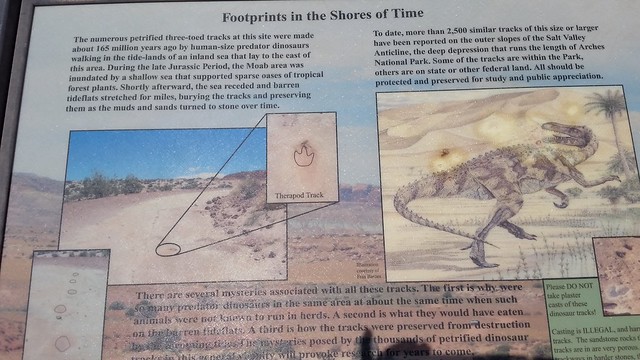 Three toed tracks made by human sized dinosaurs millions of years ago were clearly visible in the rock. 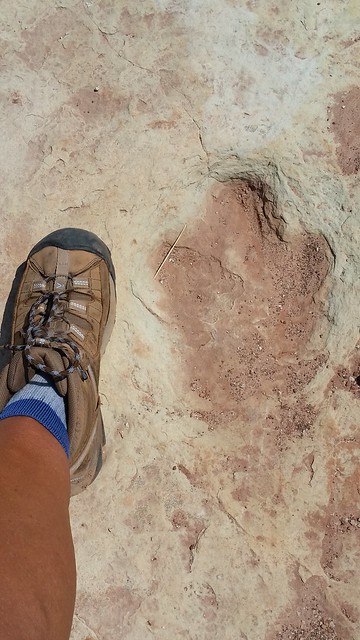 The dinosaur track is on the right

The road continues for about four miles beyond the dinosaur foot prints before reaching Hwy. 191.  The land is managed by the BLM (Bureau of Land Management) and is traversed by numerous mountain bike trails.

30 Responses to Arches in Arches NP