We have been traveling with friends, David and Karen, for about three weeks now and have had a great time exploring in northern Arizona and southeastern Utah.  But they are getting ready to move on without us and head west soon, so we wanted to share one of our favorite hikes in Arches NP with them before they leave.   The Devil’s Garden is a very popular trail with many options for hikers and numerous arches to visit.  David and Karen are adventurous so we decided to do the loop trail, a distance of about seven and half miles depending on how many short side trails you take to visit different arches along the way.

The trailhead for Devil’s Garden is easy to find as it is at the end of the main park road where the road makes a large loop and heads back toward the visitors center.   If hiking on a weekend or holiday, plan to get there early as this trail is very popular and the parking fills up quickly.  We were there on a Thursday so parking was readily available. 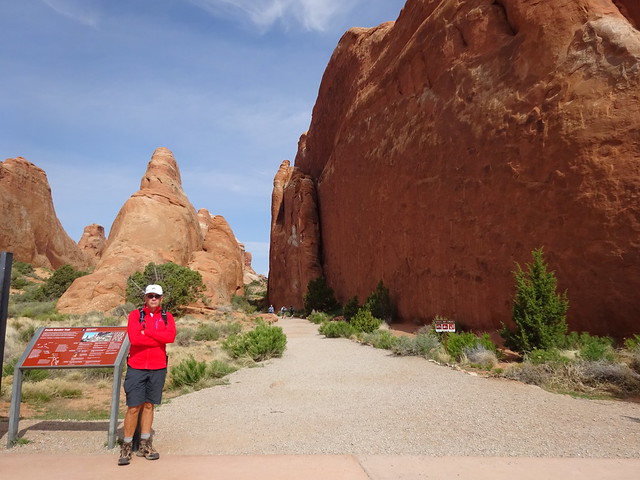 The first mile of this trail is well maintained and easily accessible for any level of hiker.  About a half mile from the start of the trail we took a right on to a side trail to see Tunnel Arch and Pine Tree Arch. 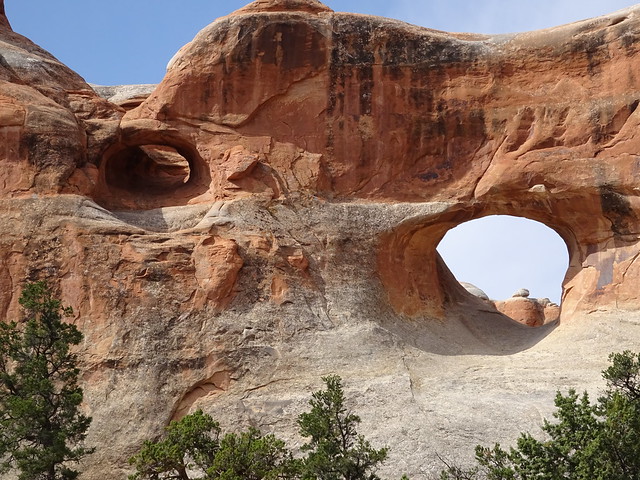 Tunnel Arch really has two arches side by side 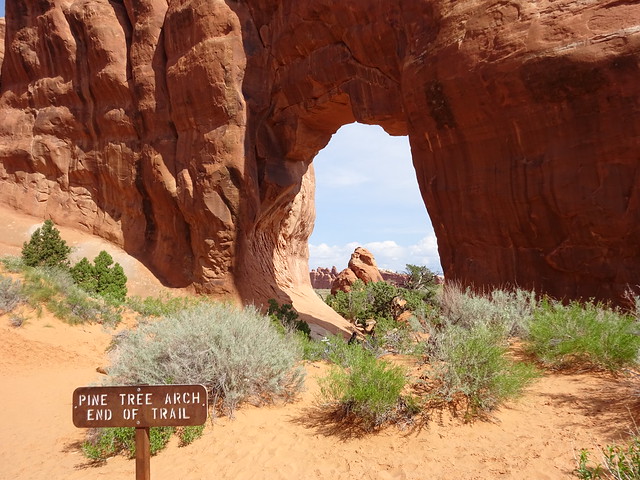 Pine Tree Arch (in case you can’t read the sign)

One of the most popular and famous arches in the park is the Landscape Arch.   At a little over 290 feet, it is considered the longest natural stone arch in the world.  A trail that led under the arch was closed in the early 1990s when several large chunks of sandstone fell from the center of the arch, so you can’t get very close. 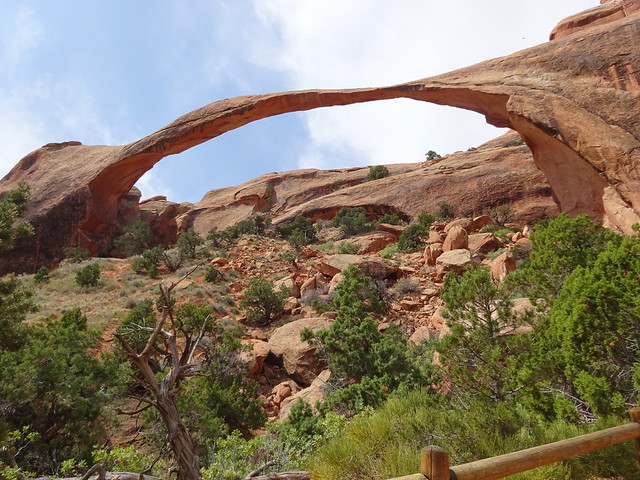 The Landscape Arch is the end of what is labeled the Primary Trail.  From here we continued up what the park calls a Semi-Primitive Trail, but it is still a good path.  The first part goes up a narrow fin of slick rock. 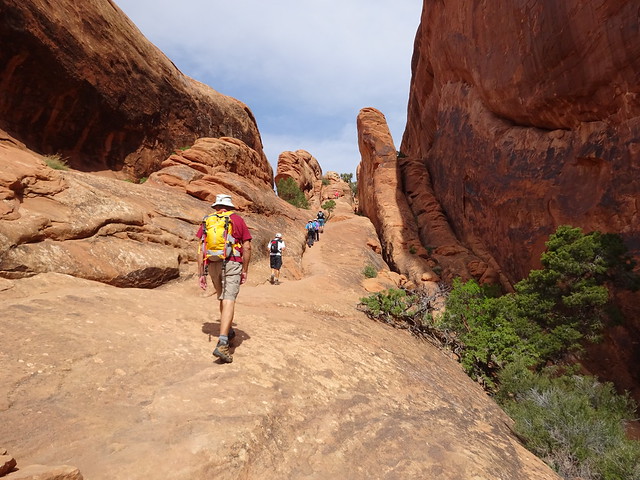 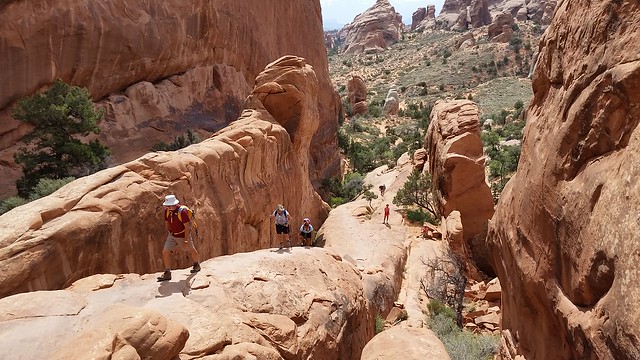 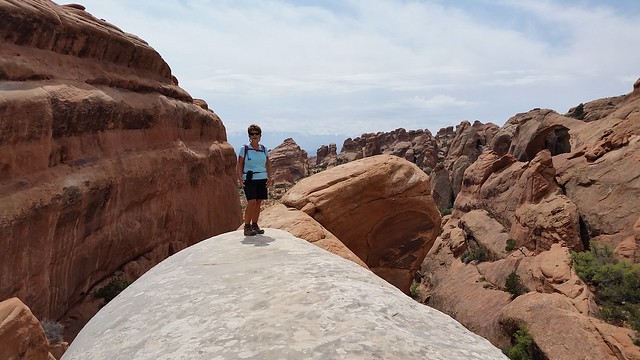 At the top of the fin you can see Partition Arch to the left.  A good side trail takes you to the back of this arch. 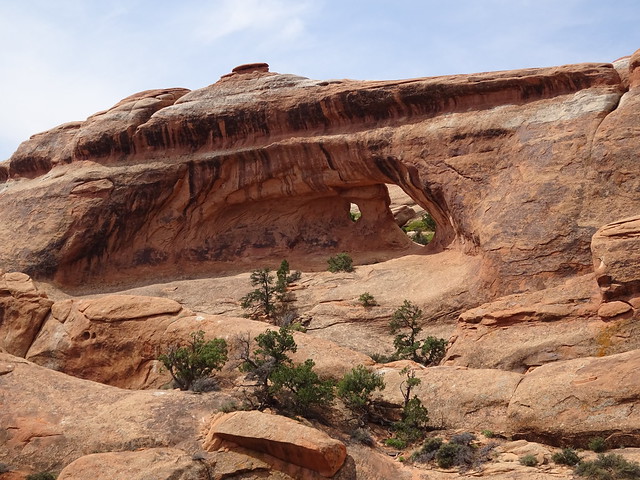 Partition Arch from the main trail 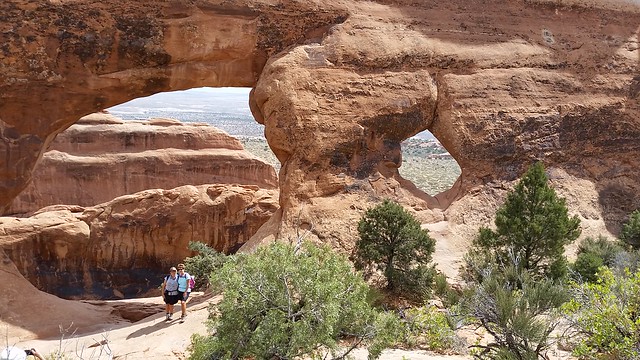 Just a bit further up the side trail is another arch, Navajo Arch.  David and Karen liked the lone pine next to the arch and posed for their next Christmas Card photo.  If the park finds the tree to be missing in December, they might want to check a certain site in an RV park in Cortez, FL! 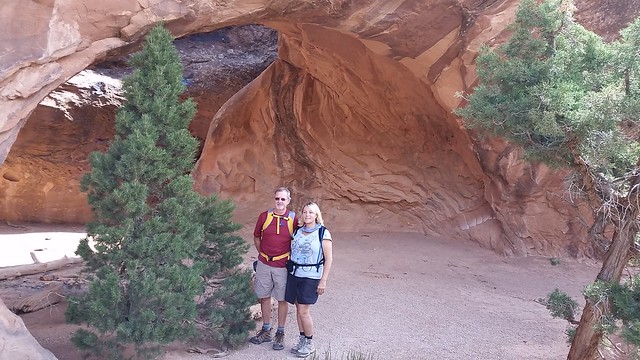 The trail to Navajo Arch goes along the side of a rock wall carved by wind and rain, creating cool patterns in the wall. 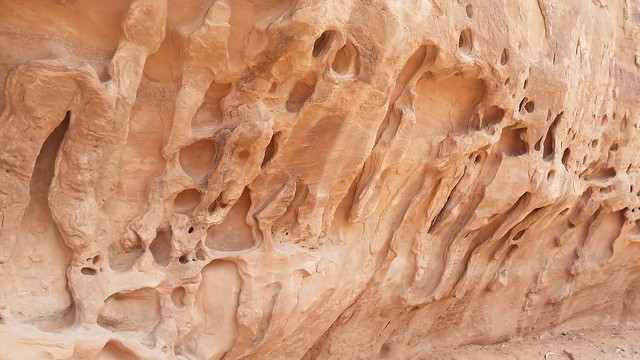 We rejoined the main trail and continued along another long but level rock fin. 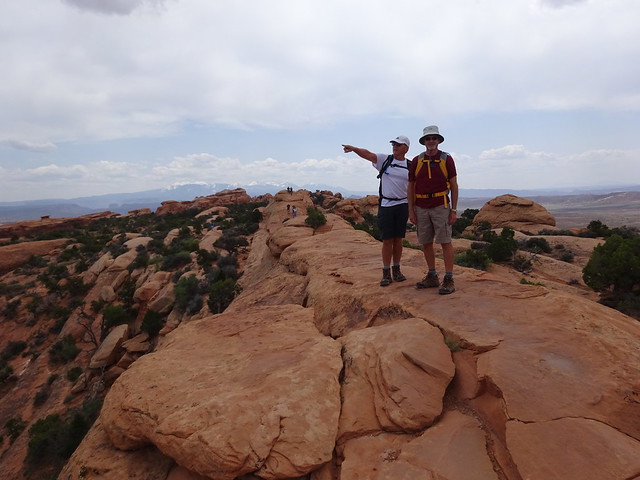 Along this sandstone fin there are many spots where you can stop and enjoy the great views.  We found a spot down out of the wind and enjoyed a great lunch with a view. 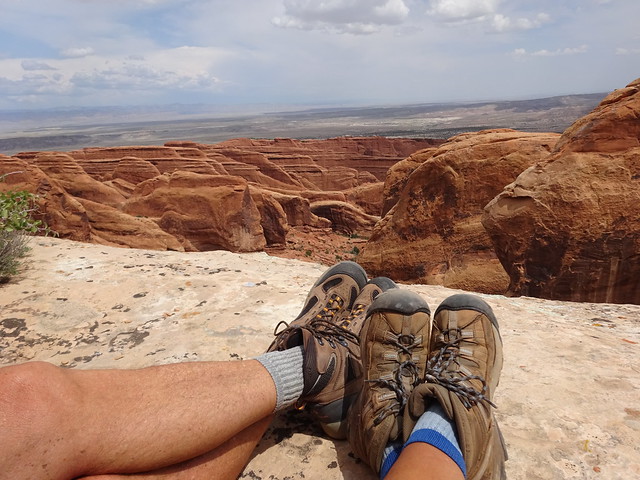 After our lunch we continued up the trail until the Double O Arch came into view.  This arch has a large opening on top of a much smaller one. 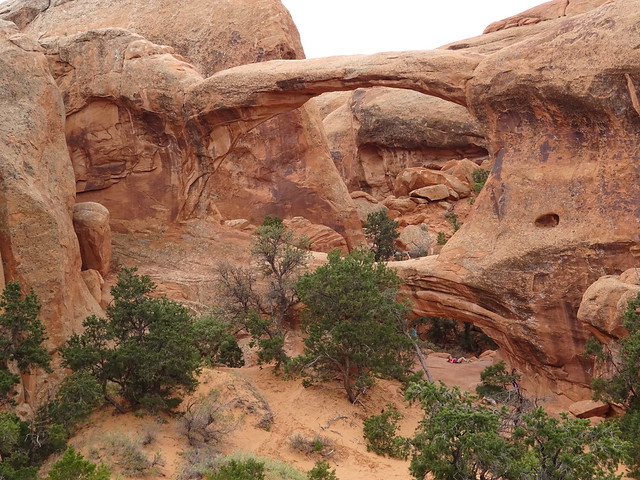 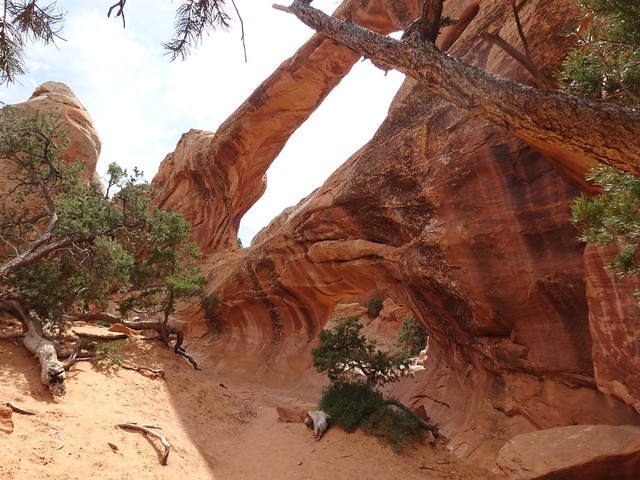 We climbed through the smaller hole for a photo from the other side. 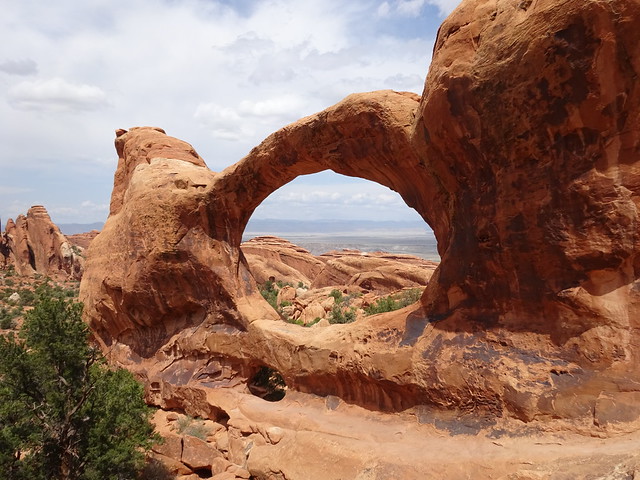 At this point the trail begins to make a large circle back toward the trailhead.  The park designates this part as a primitive trail.  While the trail is still pretty good, many parts are following cairns with several steep drops as it takes you in between and over some great rock fins.  There is only one side trail in this portion that leads out to Private Arch. 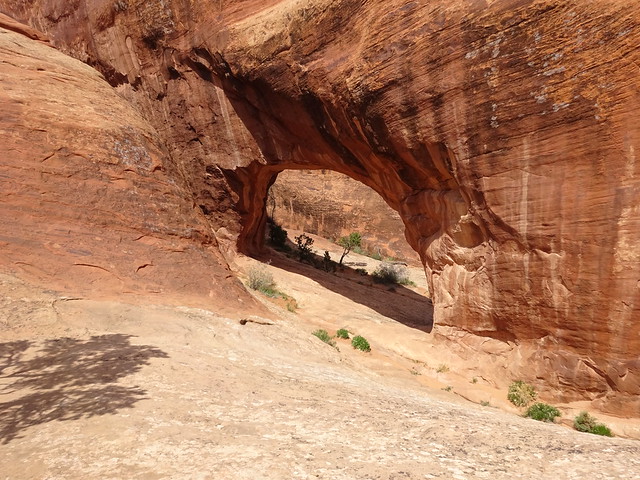 Above Private Arch is a long fin that, if you’re willing to hike up and out to the end, gives a great view of Devils Garden. 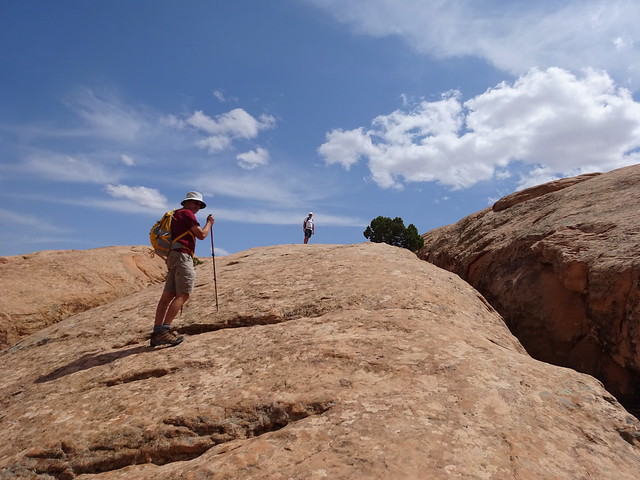 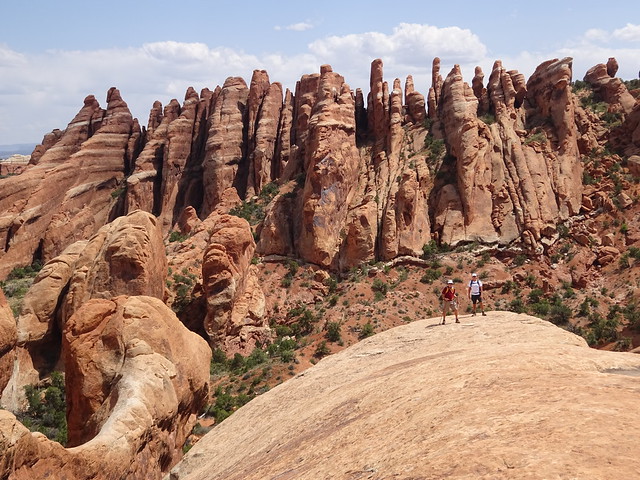 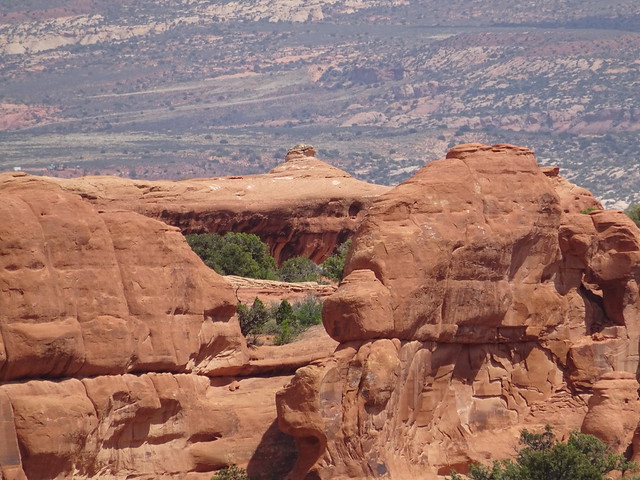 See the angry face in the rock?

Returning to the main trail we continued as the trail went up and over some narrow areas of slick rock. 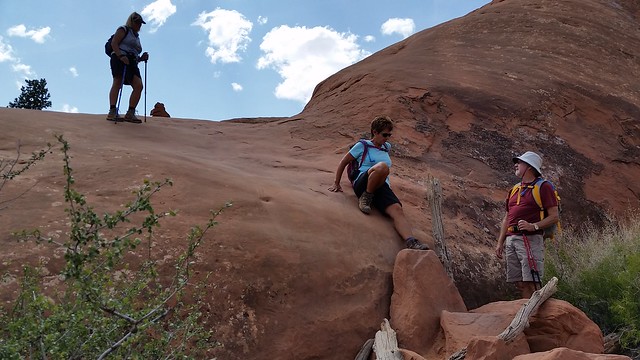 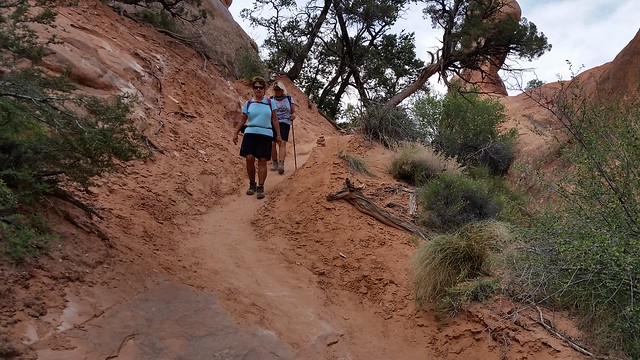 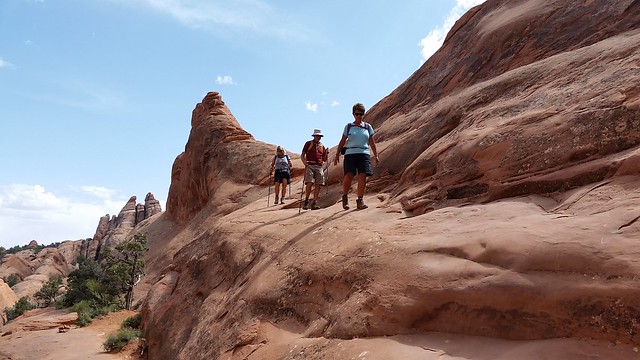 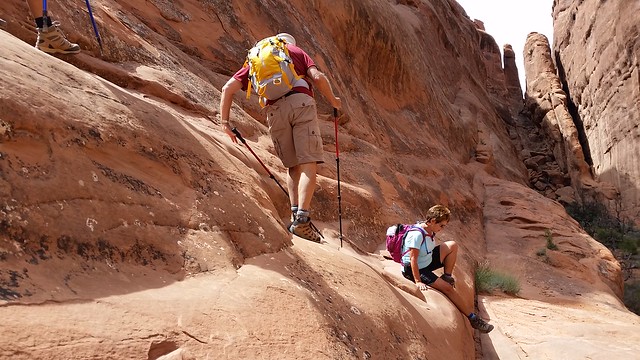 After winding our way through the rocks and up a sandy hill, we hiked through a flat area back to the primary trail again near the Landscape Arch. 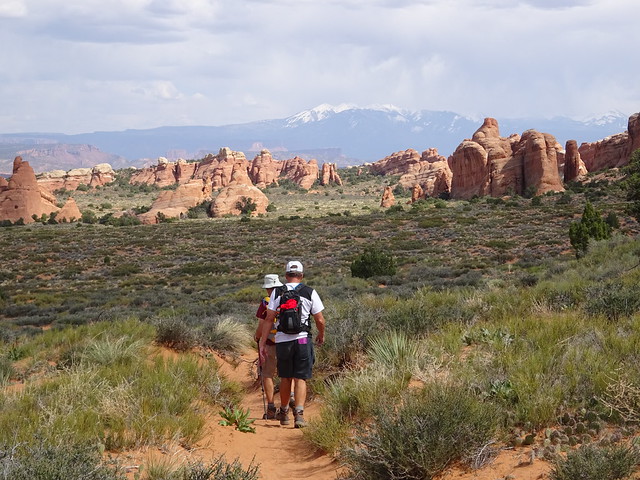 Heading back to the primary trail

Tomorrow David and Karen (oh, and Cody too!) head west for a visit to Capitol Reef NP.  We’ve enjoyed our time with them and look forward to seeing them somewhere out here in the west in the future or back in Cortez, FL.  We will be staying in Moab for another week before we also head to Capitol Reef.