Just a few miles north of Lone Pine is a significant historical site, Manzanar War Relocation Center.  While most important historical sites highlight events in American history that stir emotions of pride in us, this one is a stark reminder that there are many events in our past that bring out emotions of sadness and regret.  Manzanar is one of those places.

Racist behavior against Japanese immigrants and their descendants was very prevalent in the first half of the twentieth century.  This behavior reached hysterical levels when Japan attacked Pearl Harbor in early December of 1941.  There was wide-spread fear, fanned by the press, that the Japanese-American community along the coast would be loyal to the Japanese government and help facilitate an attack on the U.S. mainland.   Responding to this pressure President Roosevelt signed Executive Order 9066 in February of 1942.  This order authorized the military to prescribe military areas and to exclude “any or all persons” from such areas.  This power was used to declare that all people of Japanese ancestry were excluded from the entire West Coast, including all of California and much of Oregon, Washington and Arizona, except for those in government camps.

The order also authorized the construction of what would later be called “relocation centers” by the War Relocation Authority (WRA) to house those who were to be excluded.   This order resulted in the forced relocation, without due process, of over 120,000 Japanese Americans, two-thirds of whom were native-born American citizens.  The rest had been prevented from becoming citizens by federal law.  Over 110,000 were incarcerated in the ten concentration camps located far inland and away from the coast.  Manzanar was one of those camps. 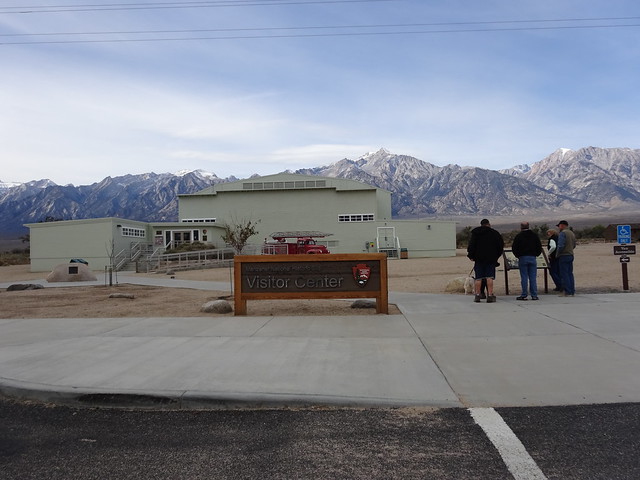 At the end of the war the internees were released and the camp fell into disrepair.  An act of Congress in 1992 designated the area as a National Historical Site and today it is under the jurisdiction of the National Park Service.  One of the few remaining buildings from a camp occupied by 10,000 people is the gymnasium/auditorium, built in 1944 by internees.  Today the building has been restored and houses a visitor center with an extensive interpretive center operated by the National Park Service. 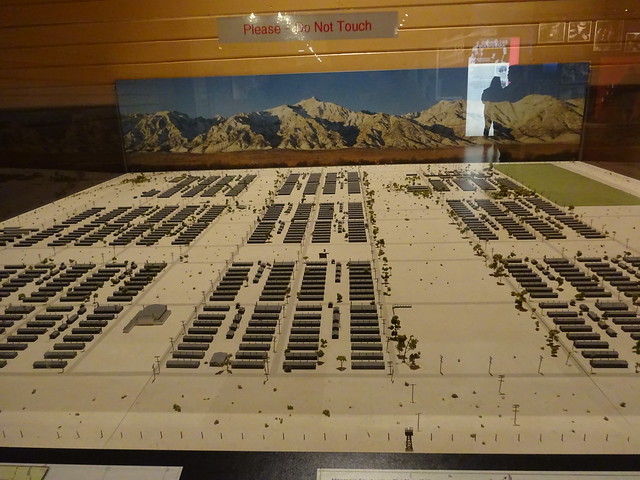 Manzanar was laid out in 36 blocks, each housing about 300 people.  A single block included 14 barracks, a mess hall, recreation hall, laundry room, ironing room, and men’s and women’s latrine.  Today building locations for block 14 are marked to illustrate the layout of a typical block.  A historic mess hall has been moved there and the National Park Service has plans to restore other buildings in the block. 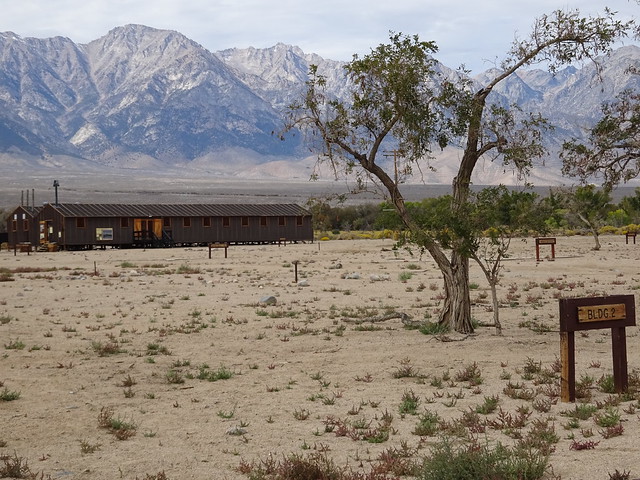 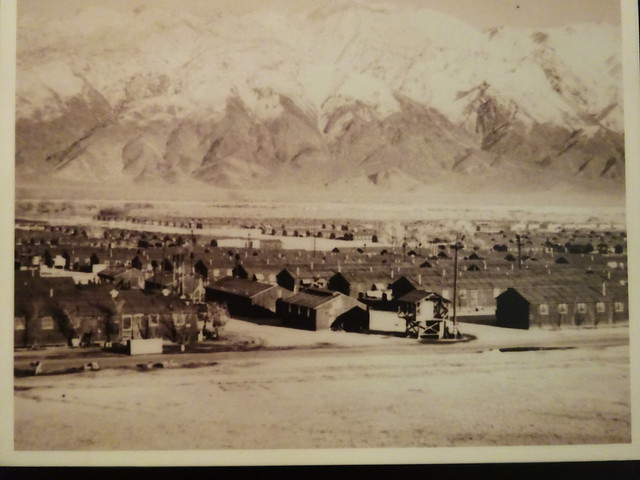 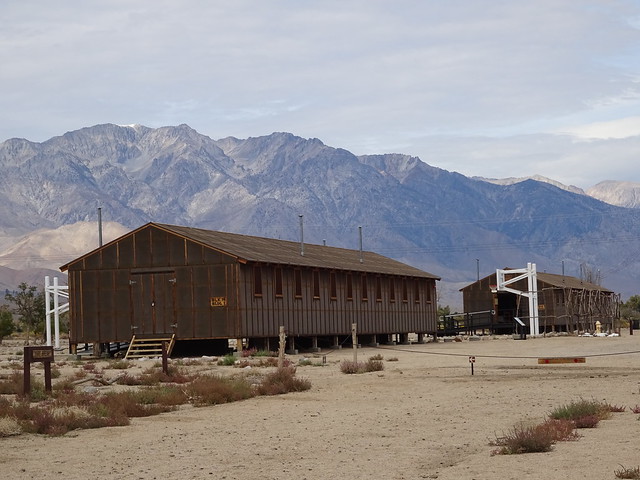 Internees personalized and beautified their barren surroundings by building elaborate gardens, which often included pools, waterfalls, and rock ornaments.  These gardens were built near the entrance to mess halls in an attempt to ease the drudgery of waiting in line for every meal.  One of the most extensive parks was Merritt Park, created by an internee who was a landscape designer. 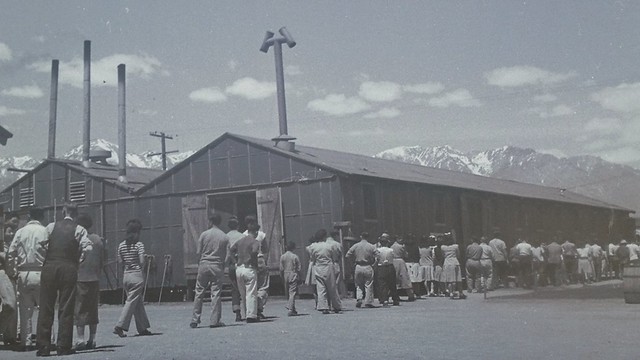 Waiting in line for every meal 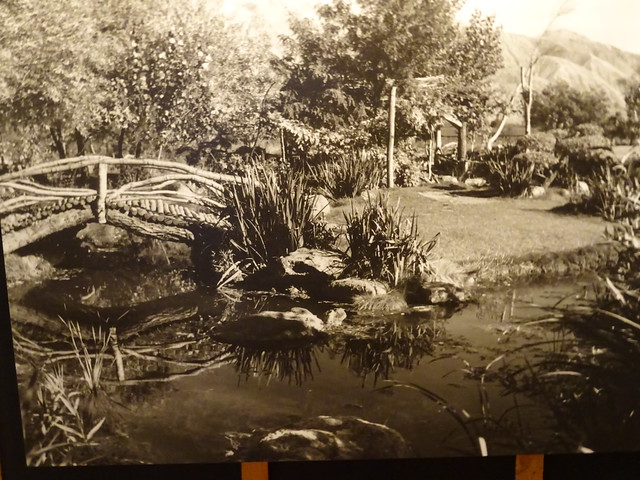 Over the years Merritt Park disappeared under several feet of sand.  In 2008 the children and grandchildren of the park’s designer returned to the camp and assisted the National Park Service and volunteers in unearthing the park. 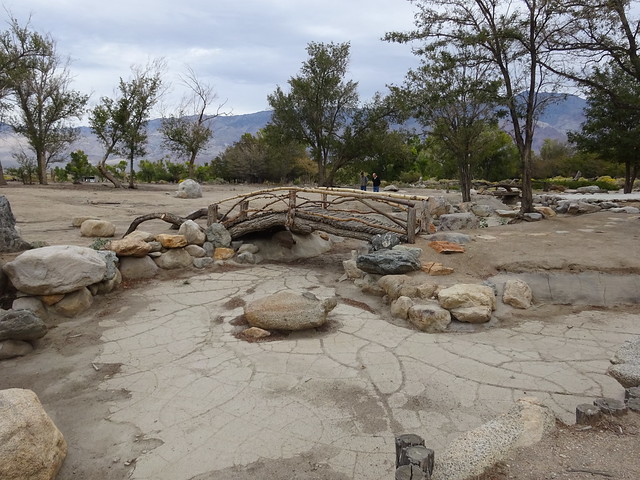 On the western edge of the camp a white obelisk marks the location of the camp’s small cemetery.  The Japanese characters read “Soul Consoling Tower.”   A master stonemason interred in the camp designed the monument as a permanent tribute to Manzanar’s dead.  He built the obelisk with the assistance of Block 9 residents, funded by fifteen cent donations from each family in the camp. 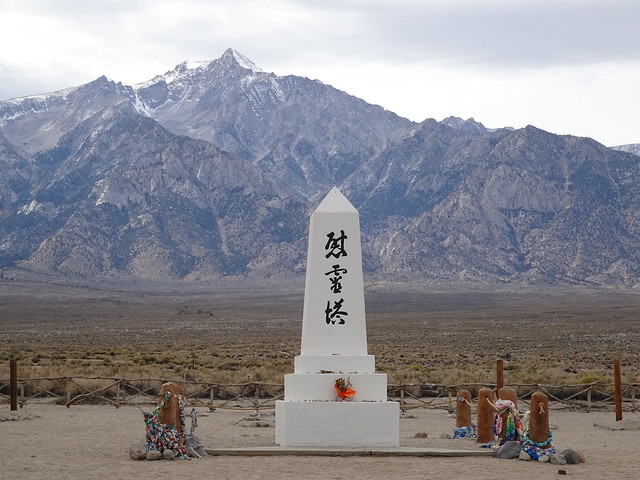 Obelisk with Mt. Williamson towering in the background

One hundred and fifty men, women, and children died while interned in Manzanar.  Fifteen of the deceased, mostly infants and older men without families, were buried in the cemetery located just outside the barbed wire surrounding the camp.  While some deceased were sent to hometown cemeteries, most were cremated and their ashes held in camp until their families left Manzanar.  After the war families requested the removal of nine of the remains leaving only six  in the cemetery today. 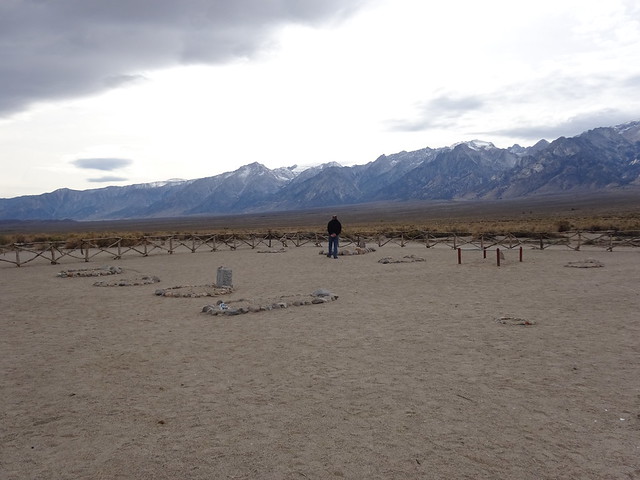 The remaining graves of the Manzanar Cemetery 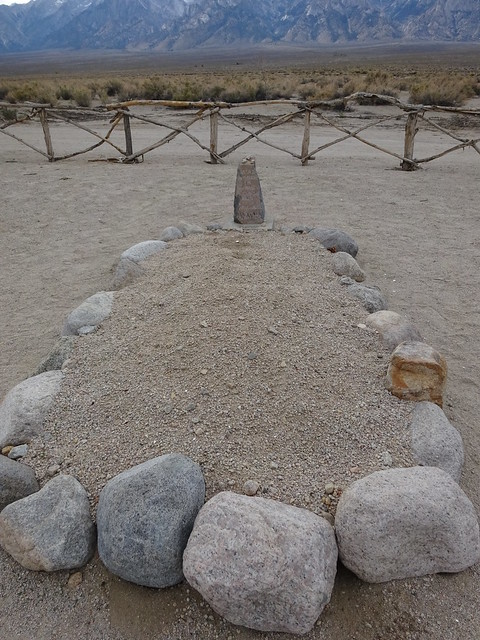 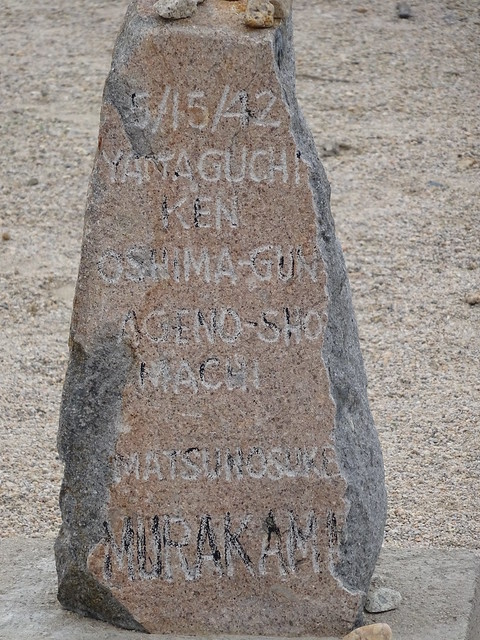 Since the end of World War II there has been debate over the terminology used to refer to Manzanar and the other camps in which Americans of Japanese ancestry and their immigrant parents were incarcerated by the government during the war.  Manzanar has been referred to as a “War Relocation Center,” “relocation camp,” “relocation center,” “internment camp,” and “concentration camp,” and the controversy over which term is the most accurate and appropriate continues to the present day. 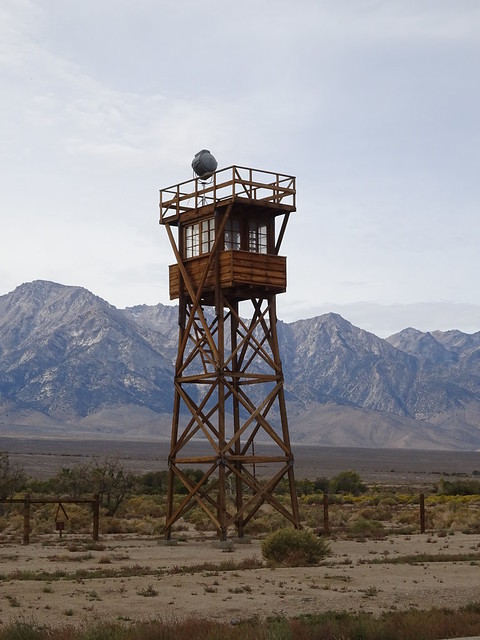 But to an American citizen forced to leave home and sent to a camp in the desert surrounded by barbed wire with guard towers manned by armed soldiers holding bayonet tipped rifles, the title of the camp probably held little importance at the time.

On December 21, 1969, about 150 people departed Los Angeles by car and bus, headed for Manzanar.  It was the “first” annual Manzanar Pilgrimage. The non-profit Manzanar Committee has sponsored the Pilgrimage since 1969. The event is held annually on the last Saturday of April with hundreds of visitors of all ages and backgrounds, including some former incarcerees, gathering at the Manzanar cemetery to remember the incarceration. The hope is that participants can learn about it and help ensure that what is generally accepted to be a tragic chapter in American History is neither forgotten nor repeated.