Back on the Road – A Stop in Louisville

OK, again it has been a while since our last post during a visit to the Thousand Islands in Northern New York.  Since then we returned to our former home town of York, PA to complete some yearly medical visits, spend some time with our daughter, and visit friends.  Now we are back on the road heading in a westerly direction.  When we heard that doggy friend Cody (oh yes, and David and Karen) were going to be in the Louisville area, we decided to make that our first stop.  So after a long two day drive (with an overnight at a Cabela’s in Charleston, WV), we arrived at the South Louisville KOA in Shepardsville, KY. 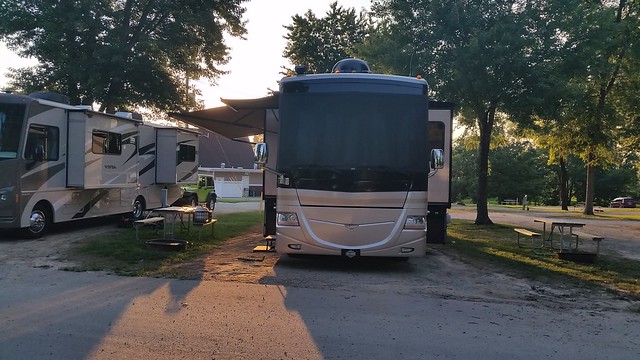 We had a decent site right next to David and Karen.  David is from Louisville and has many relatives in the area.  So the next day he invited us to join them for a visit to a newly acquired house on a lake south of Louisville owned by his nephew, Eddie. 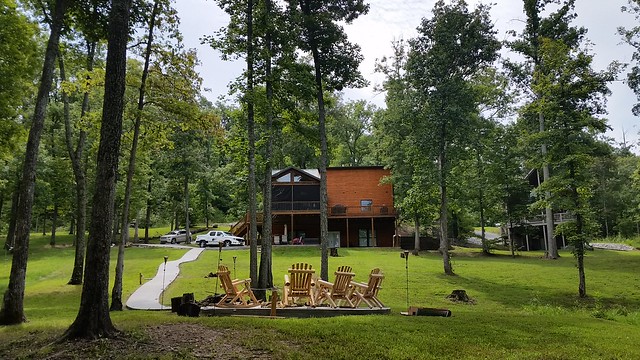 The house and nearby Nolin Lake are alive with activity on weekends, but things were pretty quiet during our mid-week visit.  Eddie was there doing some maintenance and offered to take us for a cruise around part of Nolin Lake in his pontoon boat. 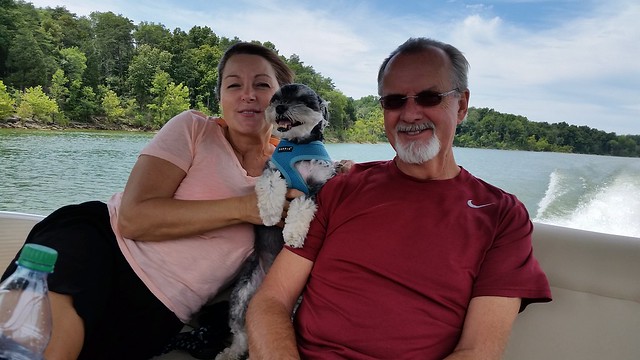 Karen, David, and Cody (the cute one in the middle) enjoy the breeze 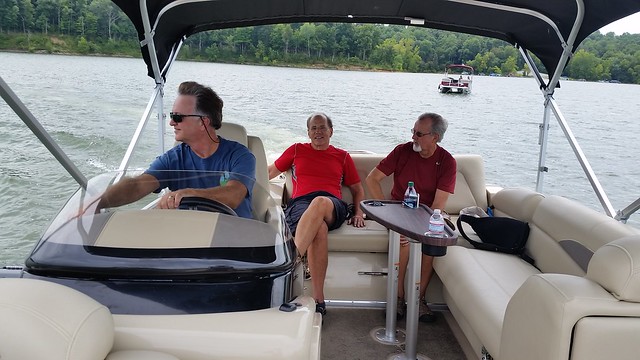 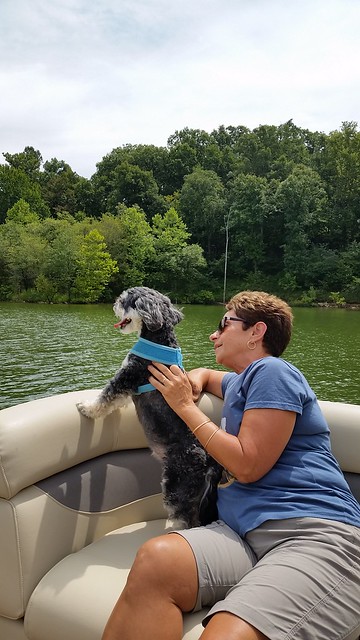 Pam and one of  her favorite buddies enjoy the cruise

The next day Cody rested in their RV while the rest of us went into Louisville for a visit to the Hillerich and Bradsby Company, makers of the famous Louisville Slugger baseball bat. 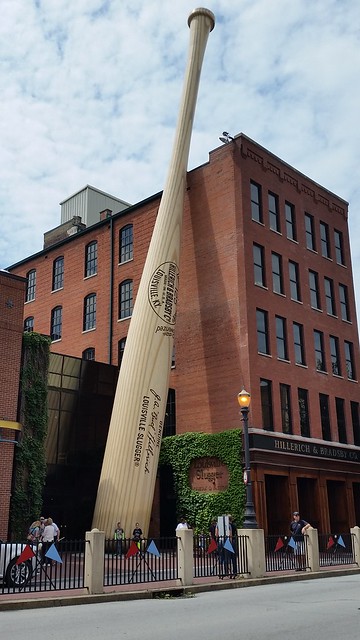 Giant “Louisville Slugger” in the entrance

J. F. Hillerich opened a woodworking shop in Louisville in 1855.  During the 1880s, Hillerich hired his seventeen-year-old son, John “Bud” Hillerich.  Legend has it that Bud, who played baseball himself, slipped away from work one afternoon in 1884 to watch Louisville’s major league team, the Louisville Eclipse.  During the game the team’s star, Pete “The Louisville Slugger” Browning, mired in a hitting slump, broke his bat. 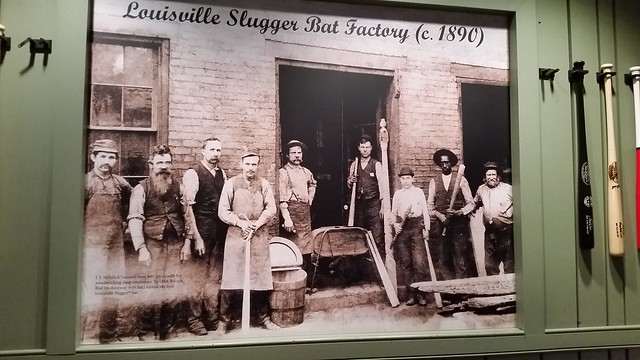 Bud invited Browning to his father’s shop to hand-craft a new bat to Pete’s own specifications.  Browning accepted the offer, and got three hits to immediately break out of his slump with his new bat the first day he used it.  Browning told his teammates, which began a surge of professional ball players to the Hillerich woodworking shop.  Soon bats were the shop’s only product.  Frank Bradsby, a salesman, became a partner in 1916 and the company’s name changed to Hillerich and Bradsby.  By 1923, H&B was selling more bats than any other bat maker in the country, and legends like Ty Cobb, Babe Ruth and Lou Gehrig were all using them.

Along the front of the building is a series of home plate shaped plaques with a bat next to them honoring many of the famous players who used a Louisville Slugger.  Below is a photo of the plaque honoring Babe Ruth. 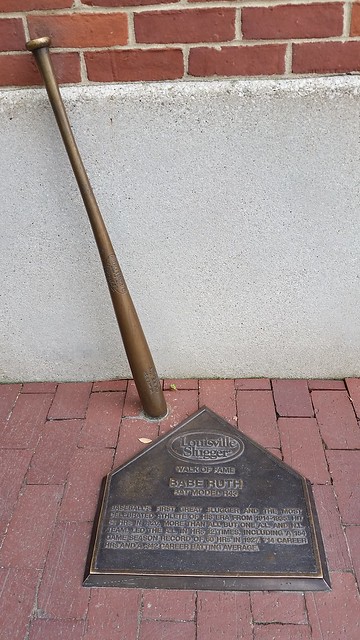 White ash and maple wood is shipped to the factory in a rough pole called a billet.  Originally each billet was placed in a wood lathe and milled by hand.  Now the milling is all completed in seconds by a machine. 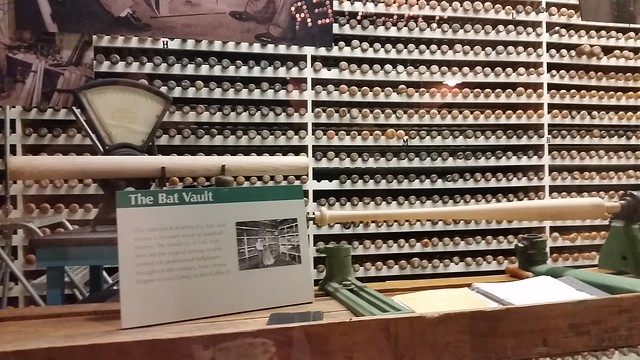 The factory has a nice visitor center with a number of displays. Below David and John test out replicas of the bats used by Babe Ruth and Hank Aaron. 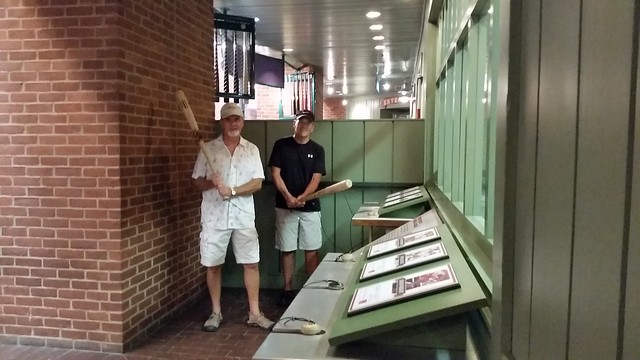 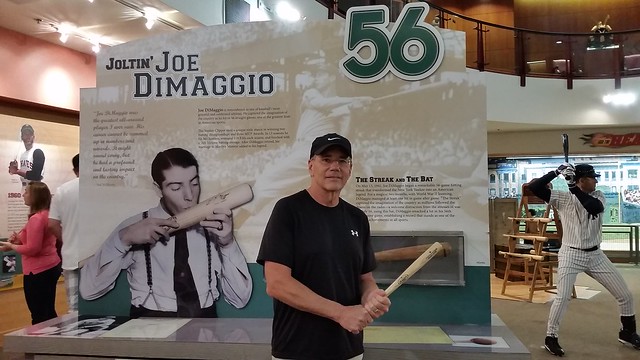 A bat looks a bit small in the huge hands of a former little league right fielder!

After a great visit we said good-bye to David, Karen, and Cody as they headed north for a visit to Michigan.  We are continuing to make our way west and have some stops planned along the way.

28 Responses to Back on the Road – A Stop in Louisville