For one of our last outings here in the four corners area of southeastern Utah we decided to take David and Karen to  the Moon House Ruins, a very neat set of ruins up on Cedar Mesa.  We drove about fifty miles to the Kane Gulch Ranger Station to purchase hiking permits.  These ruins have become popular for hikers and there is concern that they could be harmed by too many visitors.  To prevent this only 20 permits are issued each day.  Since we didn’t even see another car on the drive to the ranger station and there were only a couple of cars in the parking lot, we were not too concerned .  But we were disappointed to find that there were no permits available for the day, nor were any available for the next two days.

OK, time for a change of plans.  We asked the volunteer at the ranger station about suggestions for another hike in the area and were told that the trailhead to the Junction Ruins was just across the road.  This hike would be a bit longer than the one we had planned (just under five miles one way compared to a mile and a half) but we had plenty of food and water and a great deal of enthusiasm, so off we went. 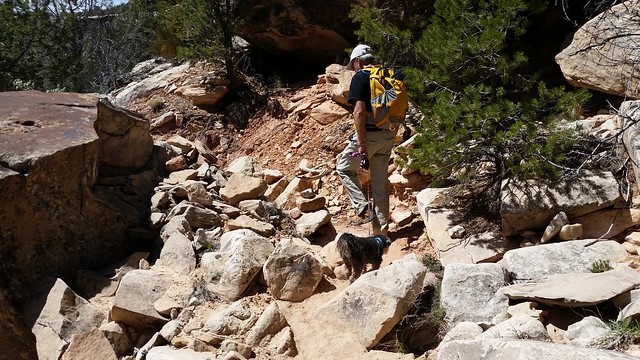 The volunteer in the ranger station must be quite a hiker as she described this hike as being pretty flat and easy.  We found it to be a bit more challenging than her description.  The trail was rough with many climbs around pour-overs.  Since we were following a wash down stream, we knew we would face a more difficult challenge on the return hike when we would be going up stream! 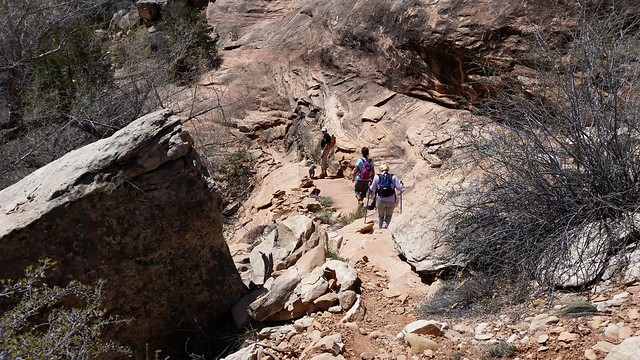 As we hiked further down the wash the views all around us were quite impressive. 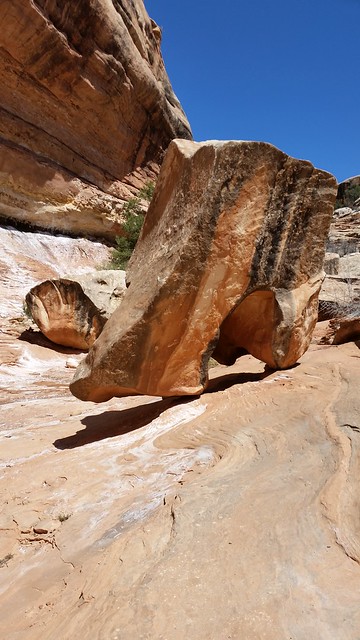 We named this Big Tooth Rock 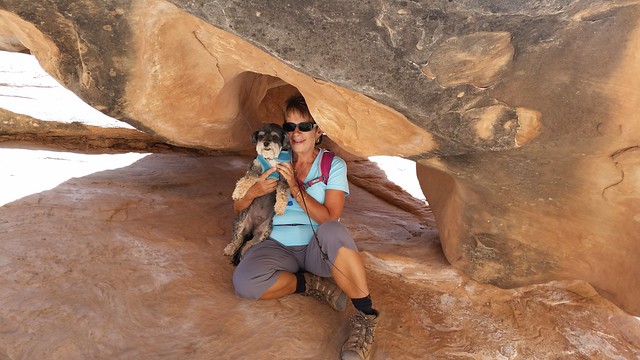 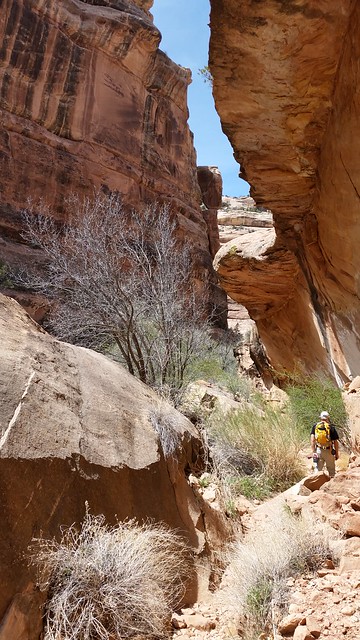 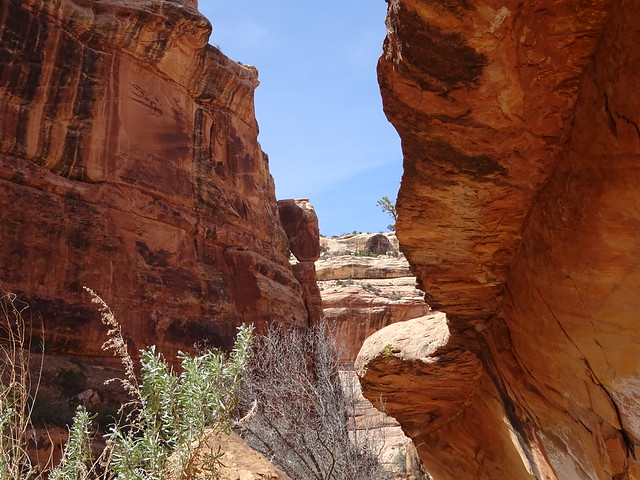 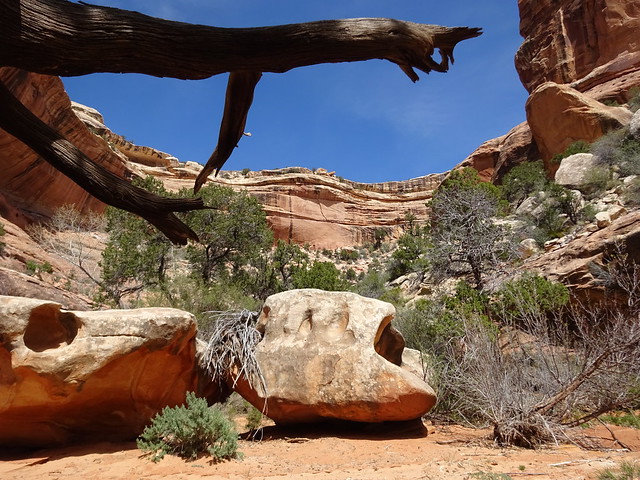 The temperature was very comfortable, but our hike leader constantly looked for shade along the trail. 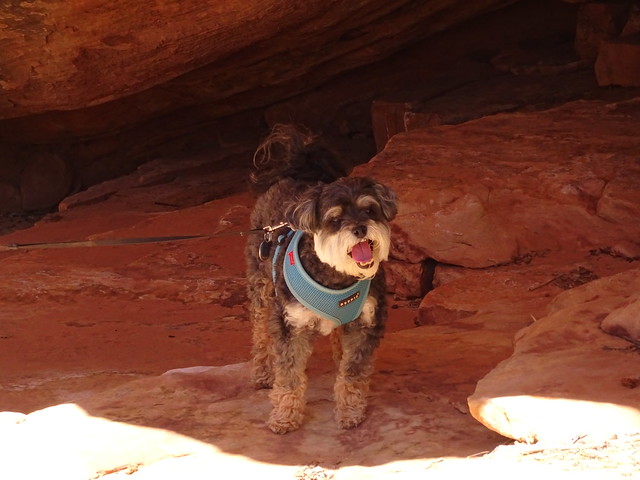 After hiking a bit over four and a half miles we rounded a bend and could see the ruins in the cliffs in front of us.  This is a two story settlement.  It looks like the upper area was the living quarters and the lower (behind the bushes) was used for ceremonies and cooking. There is no access to the upper level so we could only explore the the lower level. 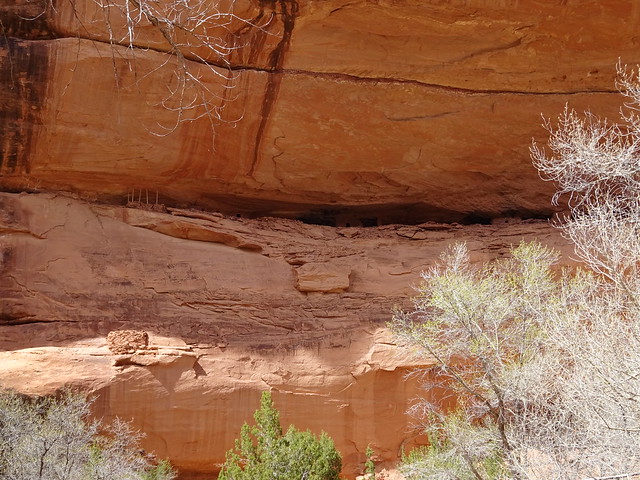 We passed a primitive campground with a few tents in it and made our way up and into the lower ruins. 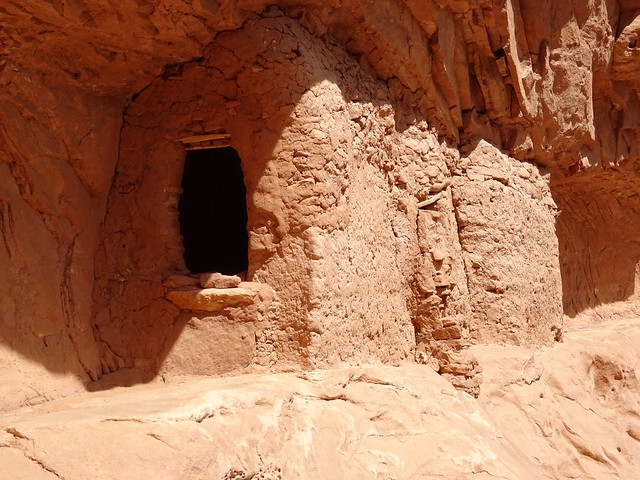 In the center of the ruins was the remains of one of two kivas at the site.  A kiva is a chamber, built wholly or partly underground, used by male Pueblo Indians for religious rites. 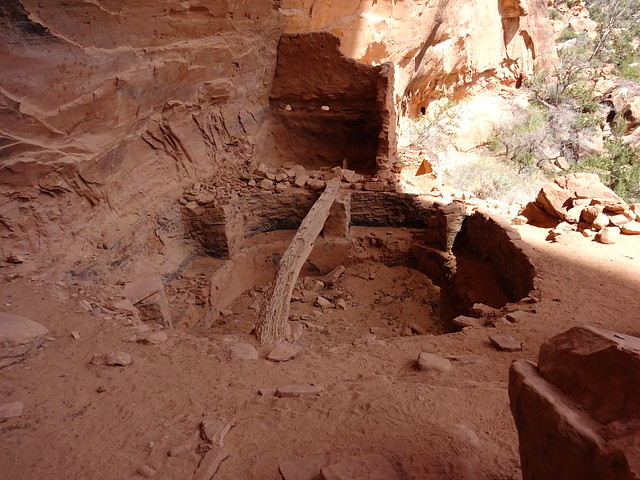 Remains of a kiva

There were also two large boulders with marks made from the grinding of grain. 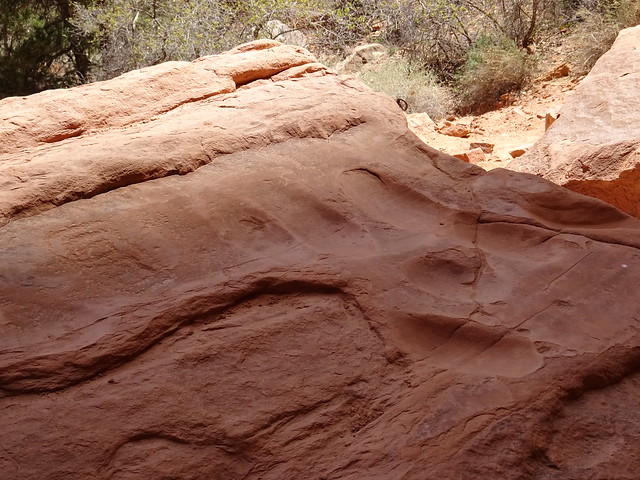 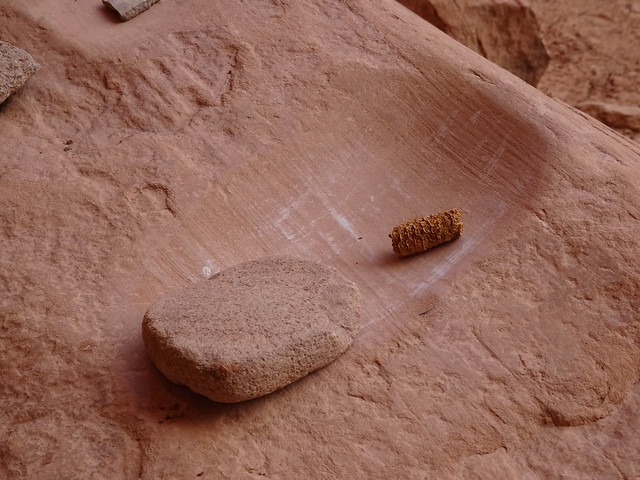 Some of the rocks were clearly used to sharpen tools. 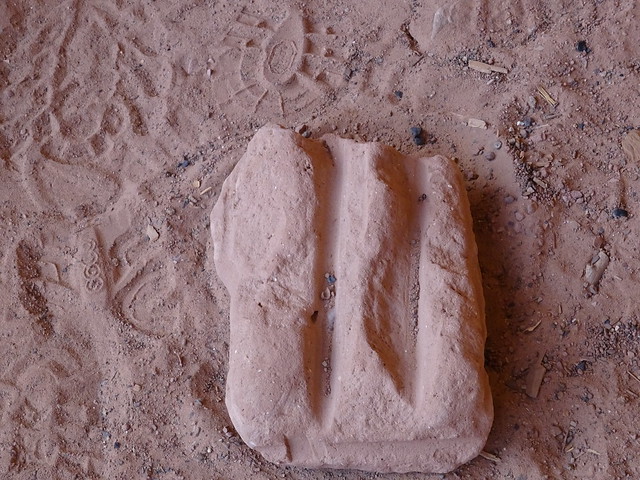 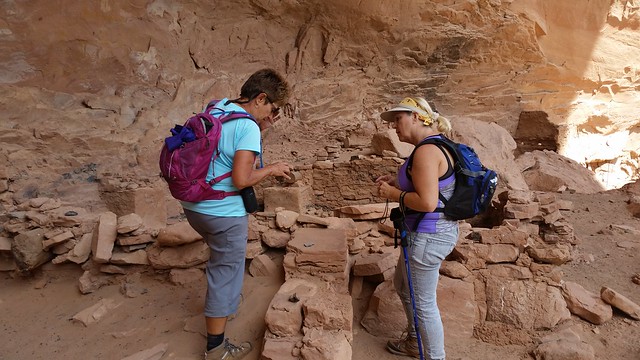 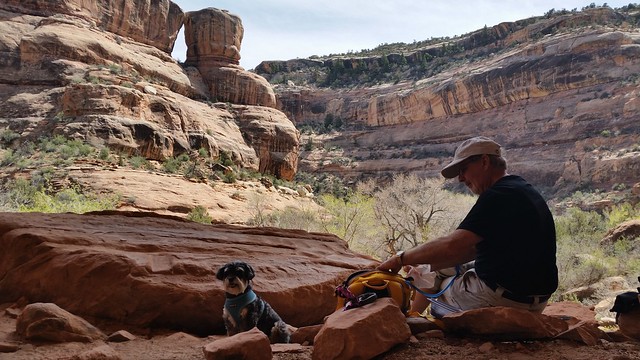 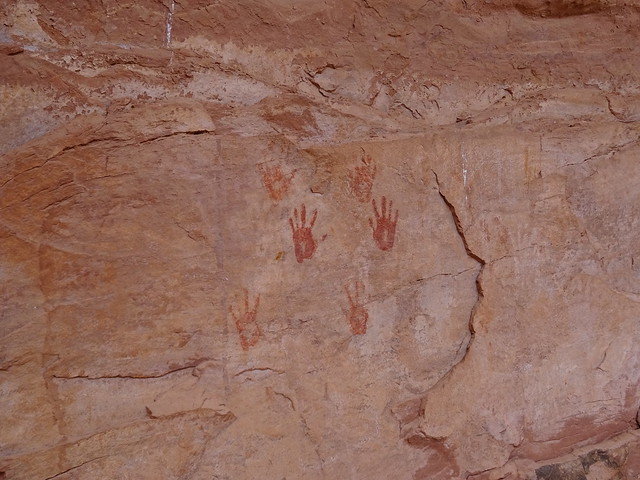 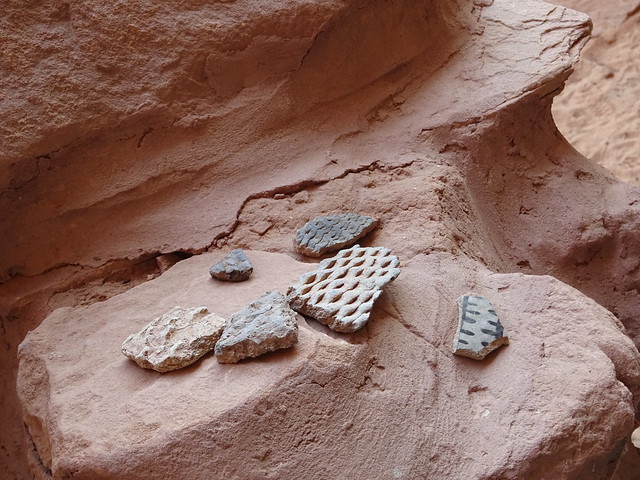 The area in front of the ruins is roped off as it is a midden, an area used as a dump for residents of the ruins.  Pottery shards, corn cobs, and burned pieces of wood are readily visible in the midden. 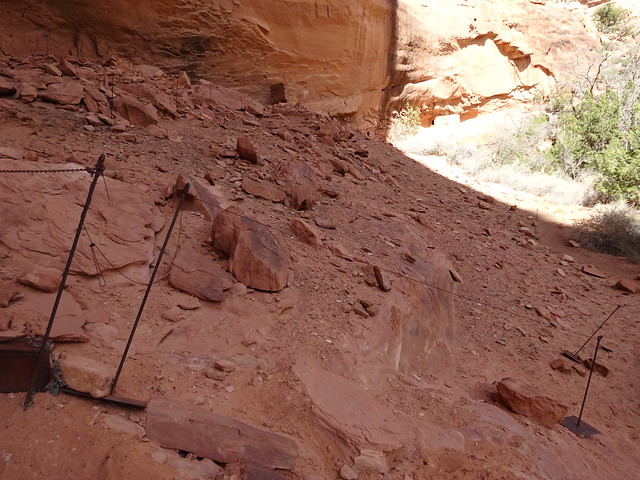 As we prepared to head back up the trail we suddenly lost the leader of the pack.  Apparently he was more than a bit reluctant to leave the cool shade of the ruins. 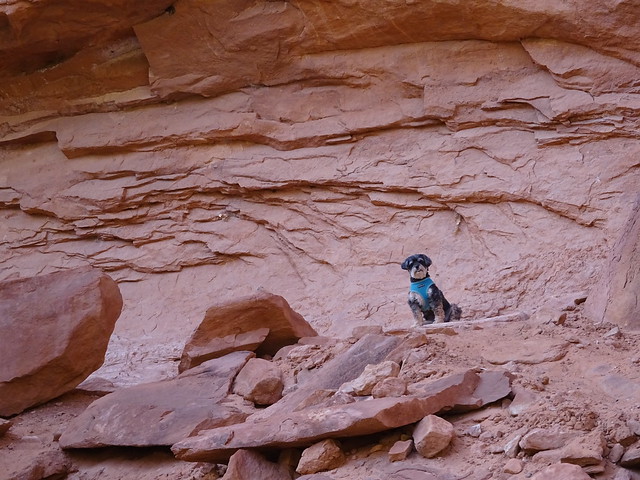 We quickly convinced our leader to get back on the trail and the group began the slow climb back up the wash. 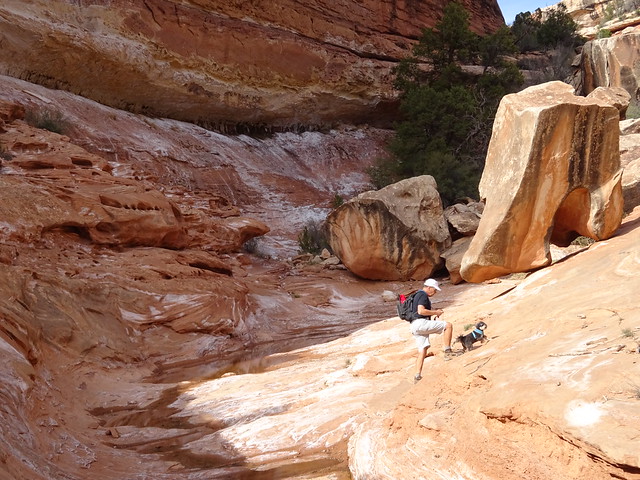 Passing “Big Tooth” on the way back

After a long climb back up the wash and out of the canyon we were happy to see the trailhead gate in front of us. 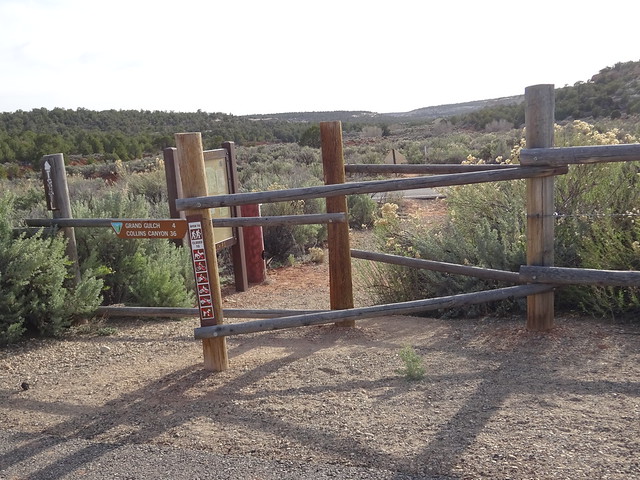 While everyone in  the group was a bit tired as we drove back to Bluff, the leader of the group just couldn’t keep his eyes open for the drive!  After all he did hike all nine miles this time! 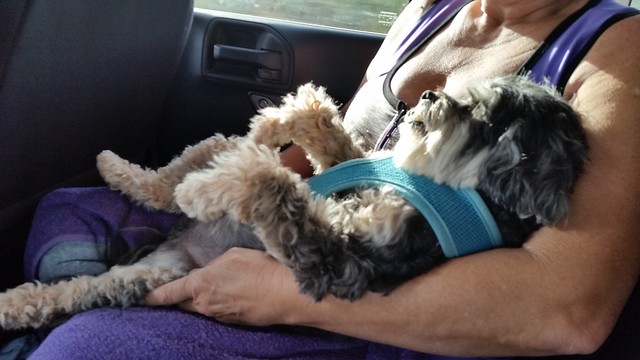 The disappointment of not being able to obtain permits to visit the Moon Ruins turned into a blessing in disguise.   We’ve completed a number of great hikes during our two visits to this area and the hike to Junction Ruins ranks close to the top of our favorites.