The Road Through Zion – Observation Point

John was up one recent morning and noticed the beautiful sunrise in the east (the normal direction of sunrises in Utah) so he snapped a photo of it.  He shared the photo with Pam later as she hasn’t seen a sunrise since retirement! 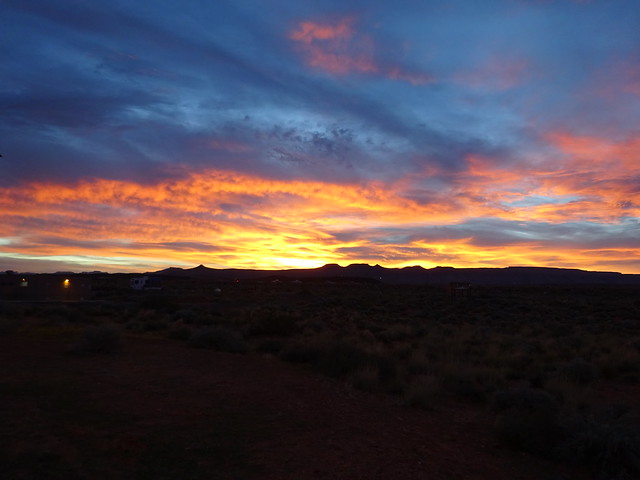 On our last day in southwest Utah we decided to drive through Zion NP and hike to Observation Point, high over Zion Canyon.  There are two ways to get to the point.  One involves a four mile hike on a trail that zigzags up the southern wall of Zion Canyon.  It’s a strenuous hike as it is almost all “up” until near the very end.  The other way is to drive to the east side of the park, take a dirt road north for about eight miles, and hike in three and a half miles on the East Mesa Trail.  This hike is shorter and doesn’t involve much change in elevation.  We hiked the canyon wall trail during our visit last year.  But the road to the East Mesa Trail was still icy (it was in March) and we found it very slippery, so we couldn’t get to the trailhead.  But there isn’t much ice in October, so off we went.

As we drove through the park on the Zion – Camel Highway (Rte. 9) we were reminded of the beauty found all along this road.  In our opinion, it may just be the most beautiful drives we’ve ever done.  Let’s look at some of the views along the way. 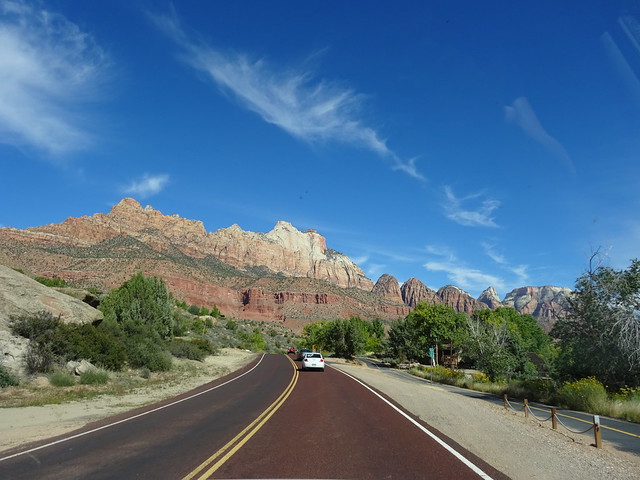 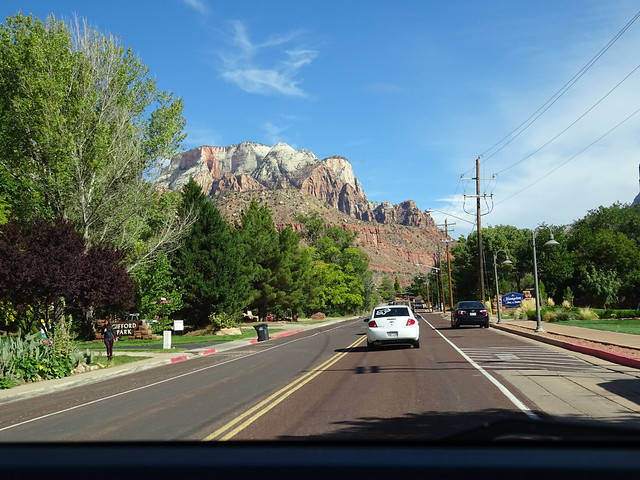 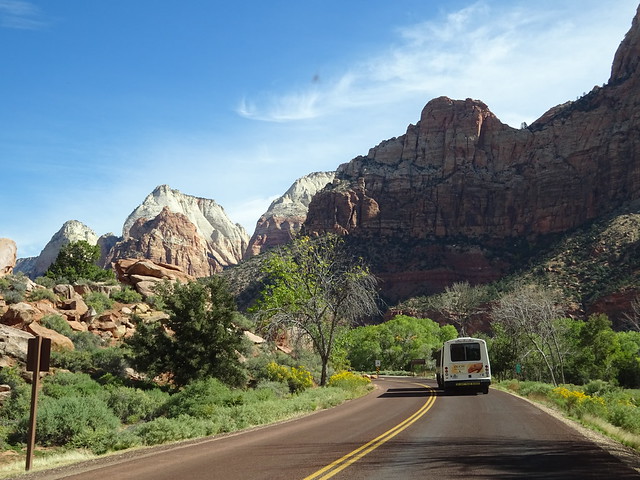 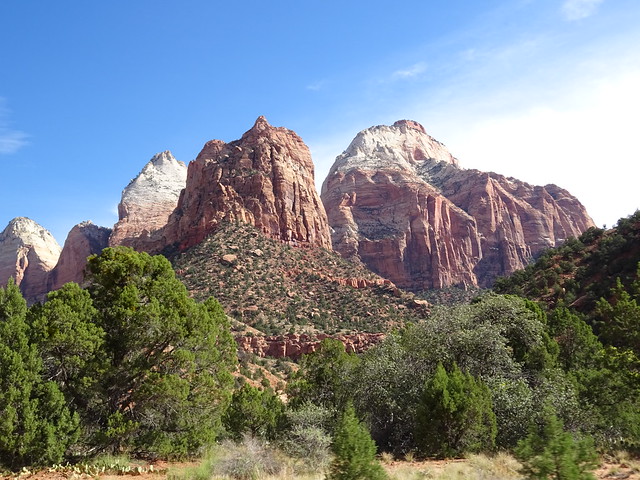 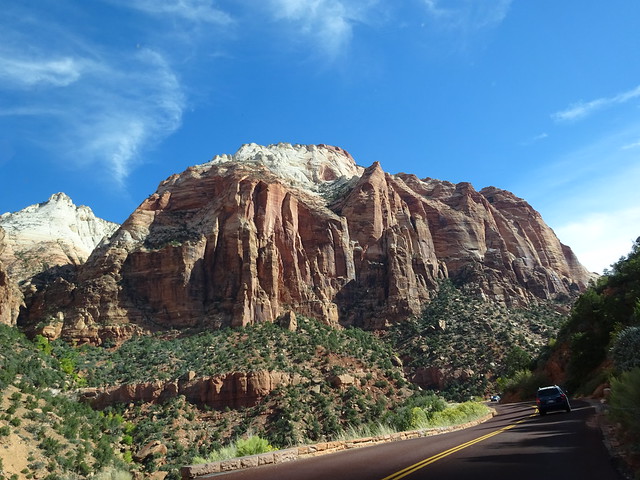 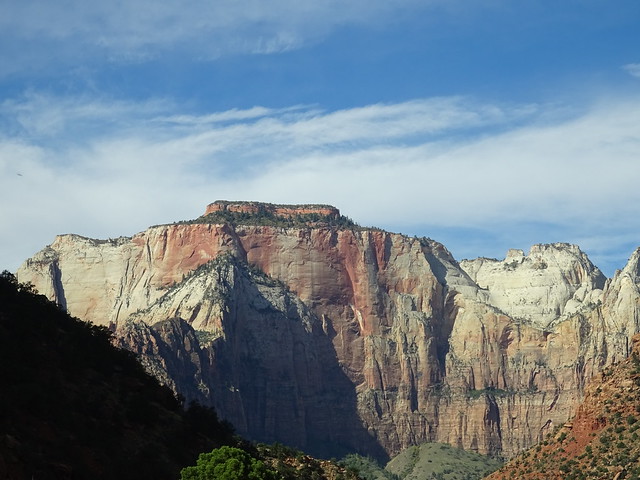 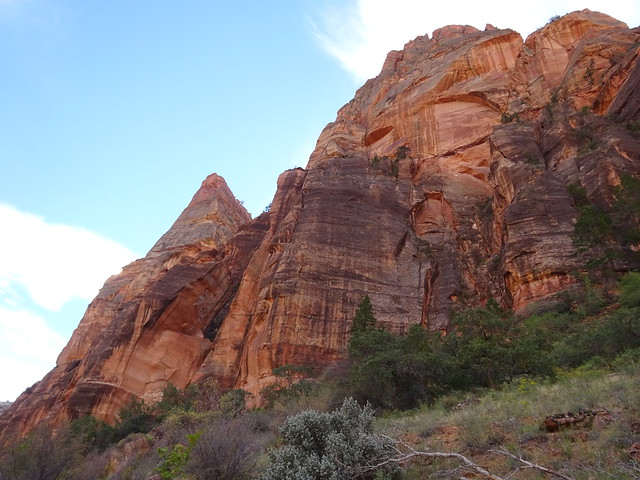 We found the East Mesa trailhead and set off over fairly flat terrain.  Two and a half miles in the trail began a slow descend to Observation Point.  Wow, this trail sure was easier than the hike up from down in Zion Canyon! 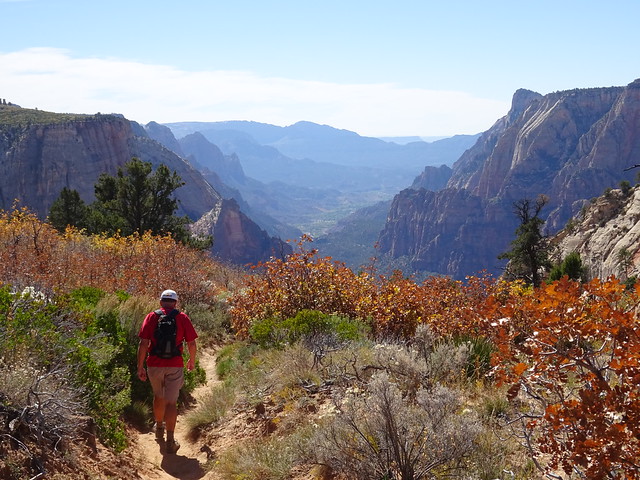 At Observation Point you get a great view of Zion Canyon to the south.  In the photo below Angel’s Landing, a famous hiking destination, is just right of center.  We thought maybe it was closed to hikers as we couldn’t detect any movement on it. 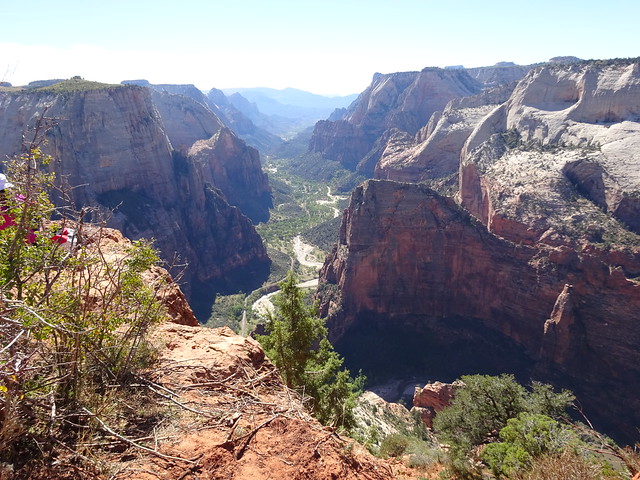 But a closer look revealed many hikers at its summit and along the trail. 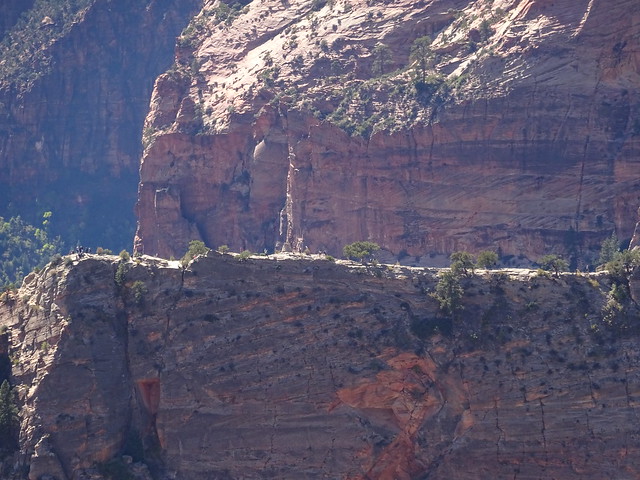 We looked across a small canyon to our left and could see the trail to Hidden Canyon.  This is a great hike that we did last year.  The trail has a bit of elevation change, but the real exciting part is when it goes around a rocky edge line with chains to hang on to.  Check out the white arrow in the picture below. 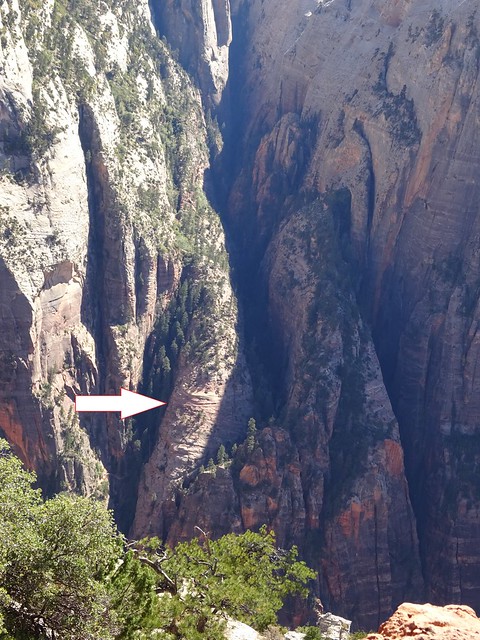 A zoom photo reveals a group of hikers moving down the trail.  It’s exciting but not as dangerous as it looks. 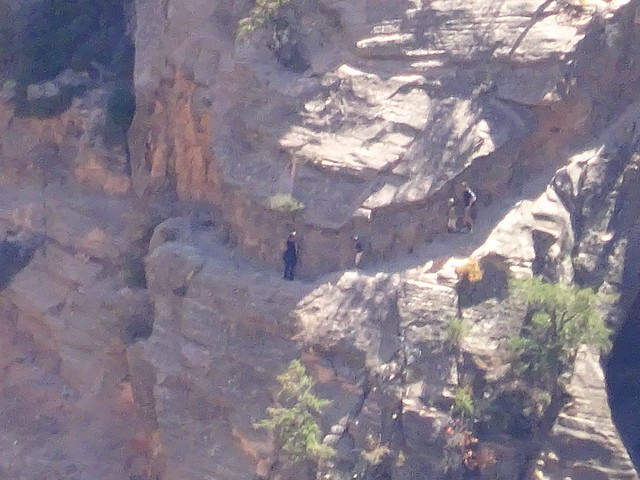 Below are a couple of views along the Zion – Carmel Highway as we returned back through the park. 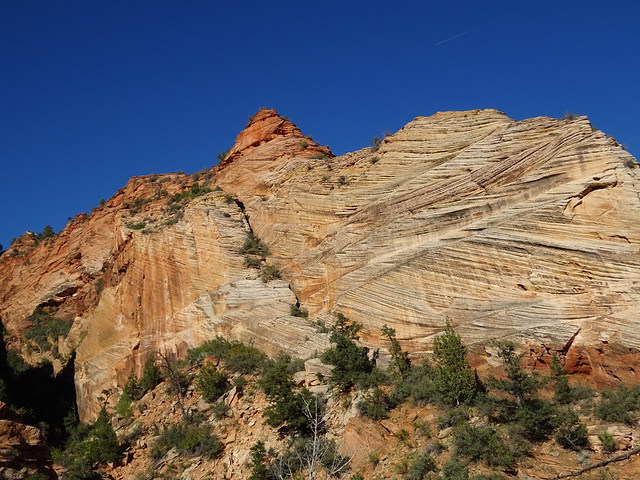 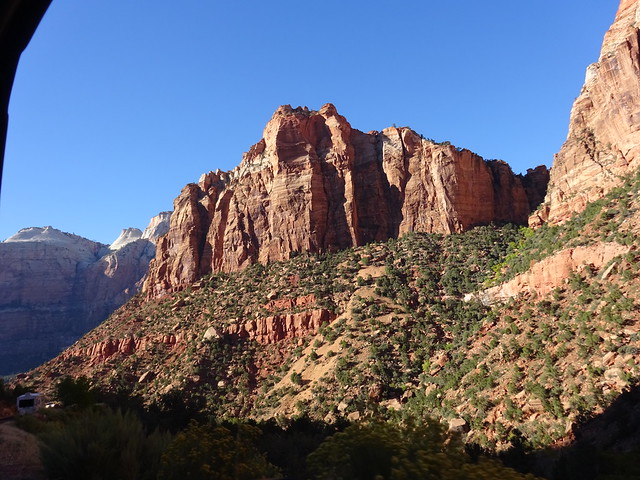 One of the great things about traveling without a firmly fixed agenda is the ability to be spontaneous.  A visit to southeast Utah was not on our agenda until the last minute.  We’re very glad the opportunity presented itself, as we had a great time.  There is just so much to see in this area it may deserve a third visit soon!

Note:  Thanks for all the feedback on our snake picture in an earlier blog.  The picture may have been a bit deceiving regarding the size of the snake.  It was a little guy, only about 15 inches long.  From comments we are pretty sure it was a baby Western Diamondback Rattlesnake with a button rattle.

Now it’s off to Valley of Fire, 50 miles north of Las Vegas, for a couple of days with no cell service.  More on that later . . .

33 Responses to The Road Through Zion – Observation Point