It’s been quite a while since our last blog so we thought a little update would be in order.  After returning from Colorado late in October we stayed home in Boulder City through the holidays.  At the beginning of January we headed south for a month long stay in Tucson, AZ. 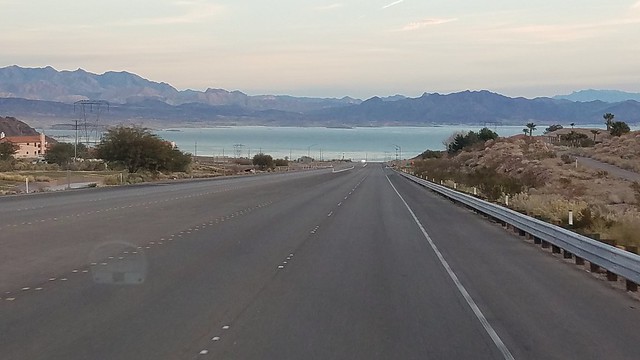 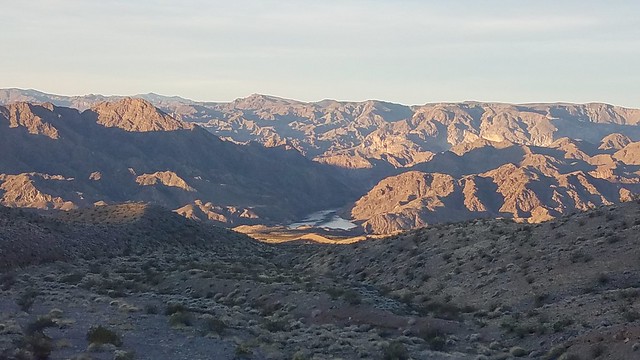 Sunrise over the Colorado River 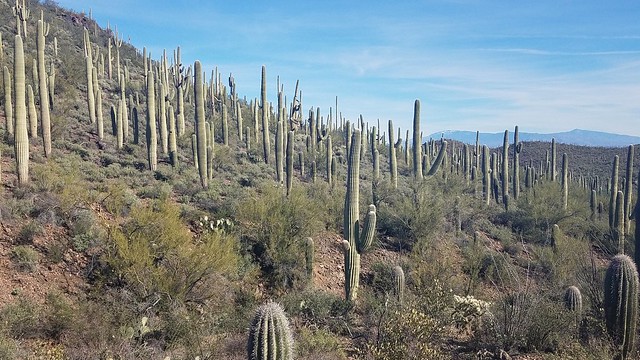 Back to the land of Saguaros 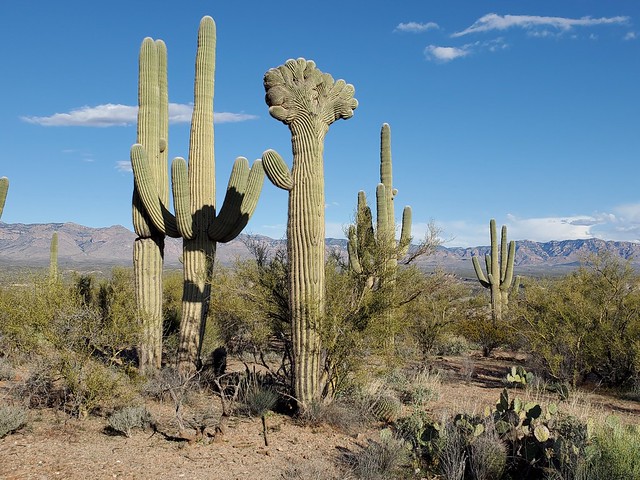 The nimble hiker still has a sharp eye out for a Crested Saguaro!

We left Boulder City at dawn and drove straight through to Tucson so that we could see Steve and MonaLiza (Lowe’s Travels) as they would leave early the next morning for an extensive (4 months) cruise.  We were joined by their friends Mark and Joodi (Chasing Dirt).  We enjoyed a hike with Mark and Joodi a few days later but failed to get even one picture of them. 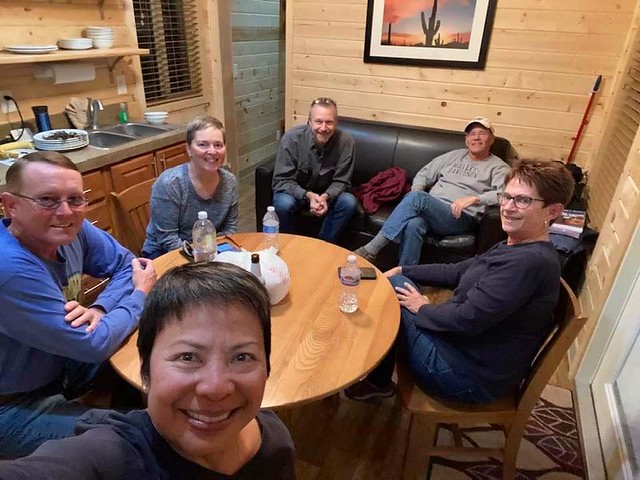 We’ve stayed at the KOA/Lazydays in Tucson a number of times and have explored the area extensively, so much of what we did was a repeat of things covered in previous blogs.

We did get to visit with friends during our stay.  One day we drove about 70 miles to the southwest to visit with Janna and Michael.  They split their time between their main home in Big Timber, MT ( where we saw them last spring) and Pearce, AZ where they are completely renovating a house they purchased a few years ago.  Jodee and Bill (On the Road Abode) joined us for this visit,  just like they did two years ago when we last visited Janna and Michael in Pearce.  The transformation of the house is quite incredible.  Check out their blog (Renovation Cowboy Style) to see the entire process). 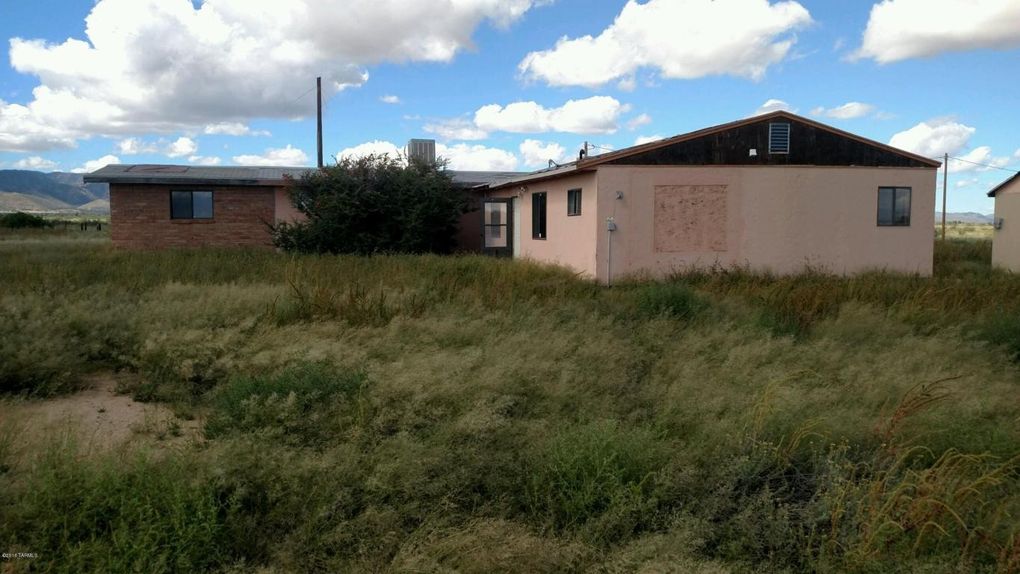 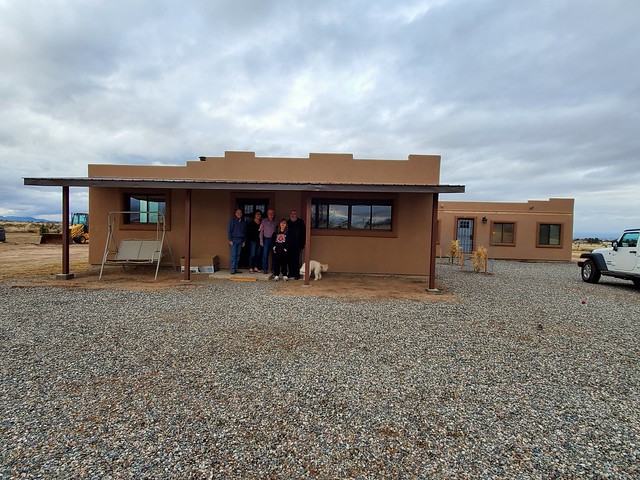 About half way through the month Dave and Sue (Beluga’s Adventures) arrived here after spending the holidays in Florida.  After not seeing them since the previous March, Lewis immediately recognized our motorhome.  He loves to come in and play ball with us. 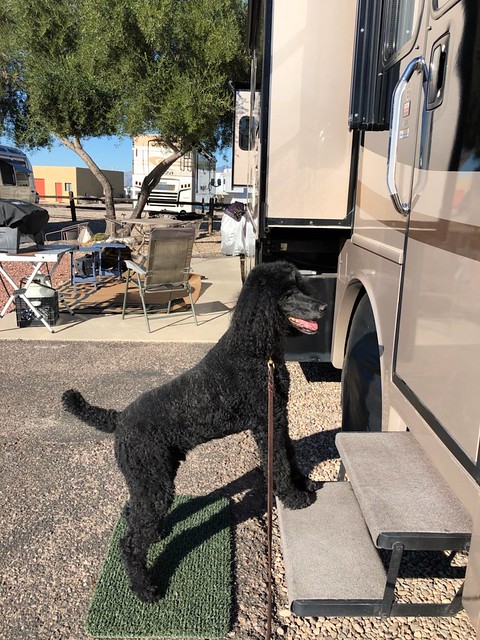 We were away, but Lewis knew who lived there! 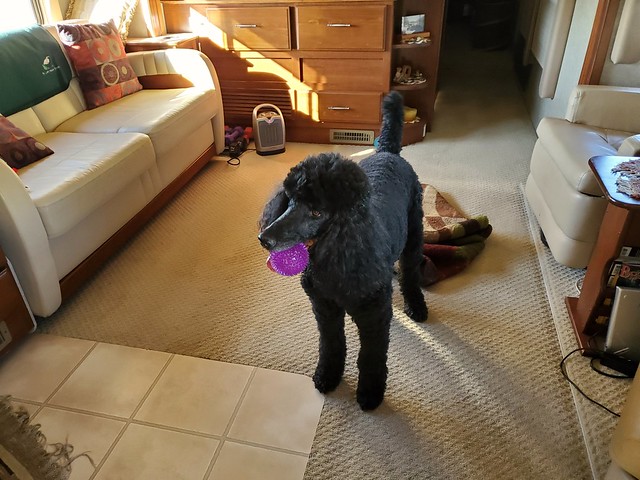 Finding the ball in our rug is his favorite activity

Dave and Sue joined us on a day trip to Tombstone to check out the house Jodee and Bill recently purchased there.  We had a great visit and loved their new digs, especially the 360 degree views of the surrounding mountains.  Unfortunately, no photos were taken.

At the end of the month we made the long (375 miles) drive into southern California to spend a couple of weeks in the little town of Borrego Springs, located in the heart of Anza-Borrego Desert State Park.  We love to stay in The Spring at Borrego, a beautiful park surrounded by a very nice nine hole golf course. 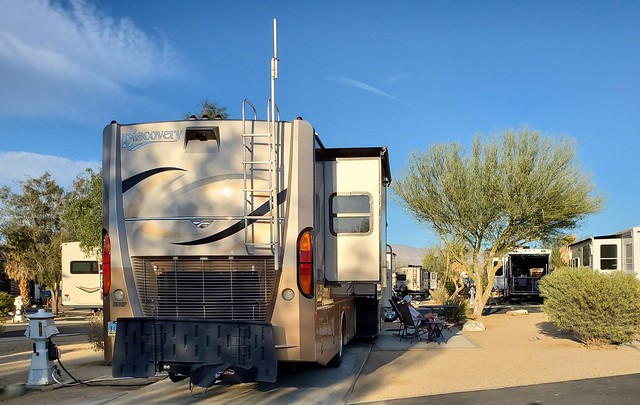 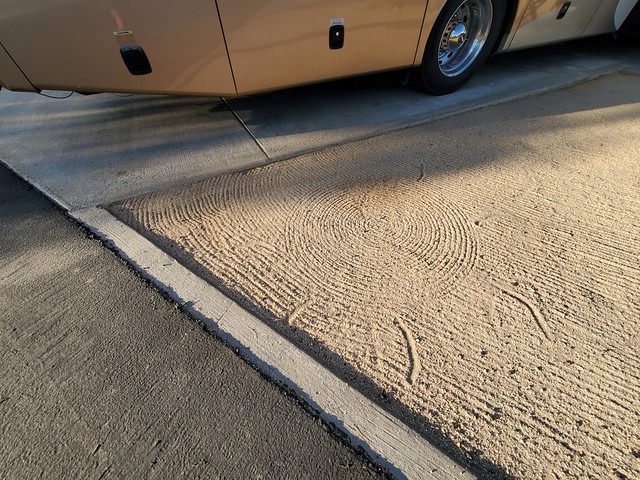 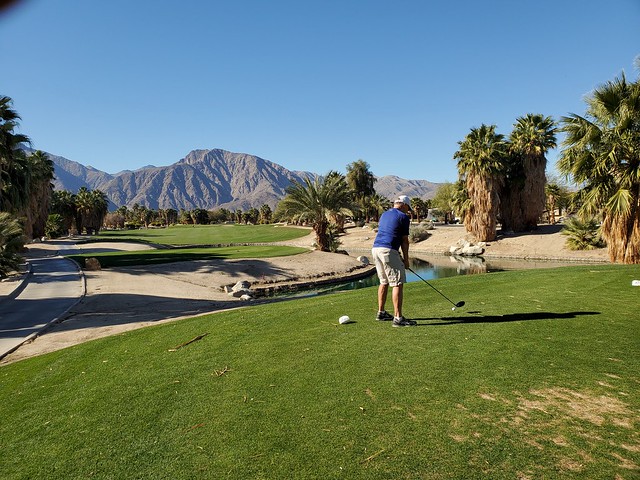 Hey, somebody has to do it. Right? 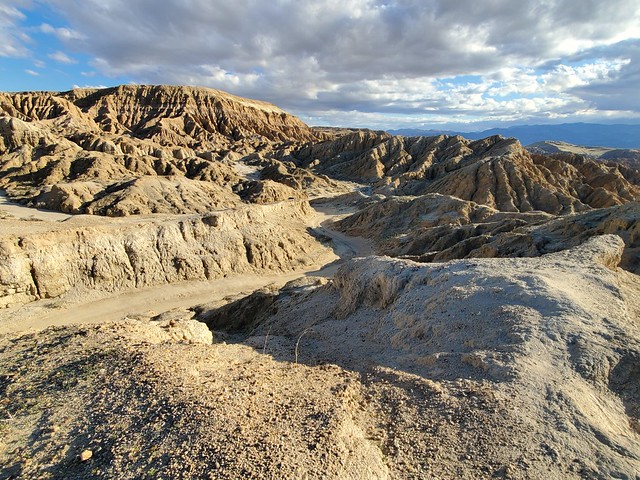 A Jeep ride into the badlands to Inspiration Point

One day Dave and Sue joined us for a long drive to the east side of the Salton Sea.  Along the way we stopped on the west side of the sea just north of Salton City.  There we drove west into the desert a couple miles on a narrow dirt path to check out a small arch in the Coral Wash. 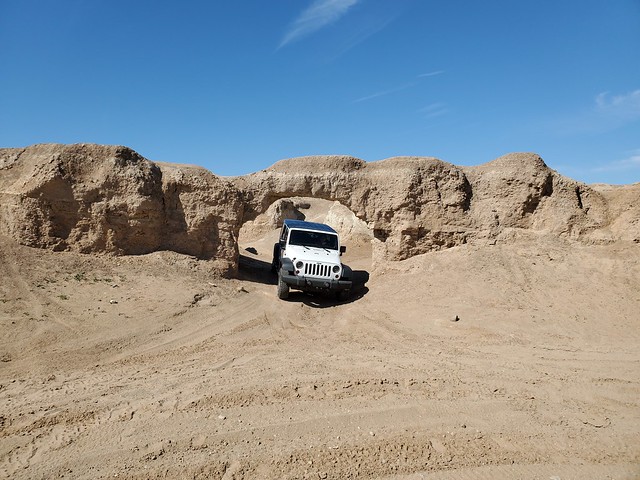 Returning back to the highway we continued north towards the town of Mecca where we rounded the end of the sea and headed south.  After about ten miles we turned to the east and drove to a parking area for a visit to the Dos Palmas Preserve, a small oasis of palm trees.  There we enjoyed a short walk on a designated path through the palms, which towered over our heads. 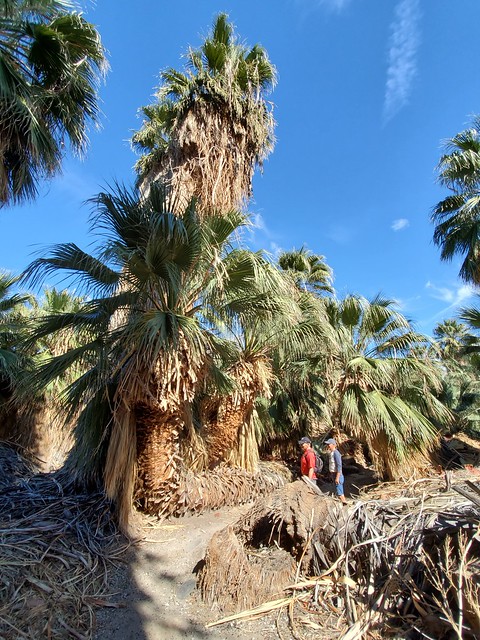 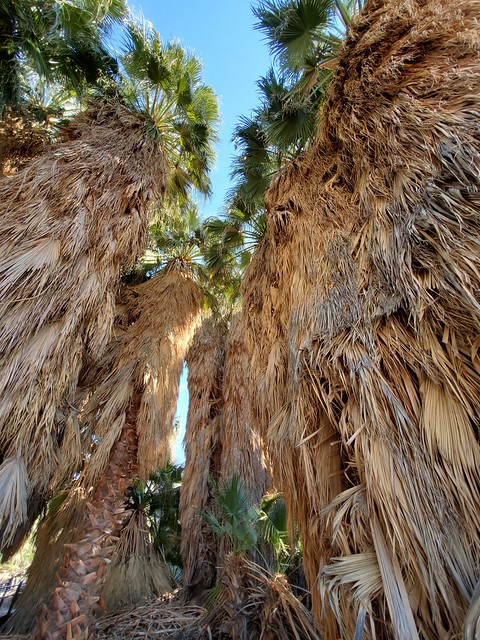 Leaving the preserve, we continued down the east side of the sea for about 20 miles to visit the tiny community of Bombay Beach.  We were here a few years ago and thought it to be one of the saddest communities we had ever seen.  Recently a volunteer at the Anza-Borrego Desert State Park said that artists had moved into the town and were attempting to revitalize it.

We didn’t see any real “revitalization” going on but we did enjoy some of the artwork covering many of the abandoned buildings. 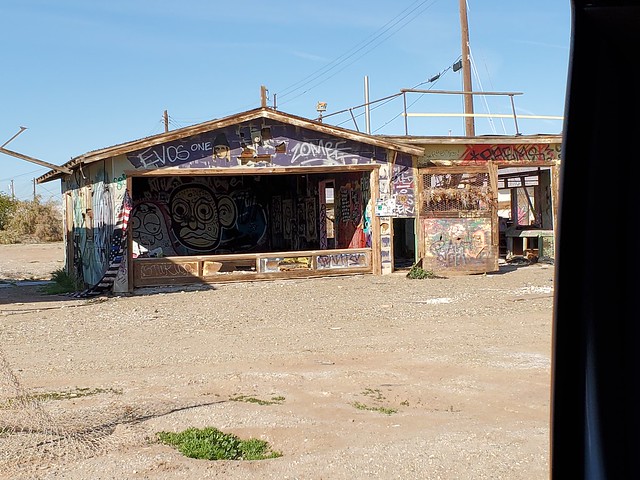 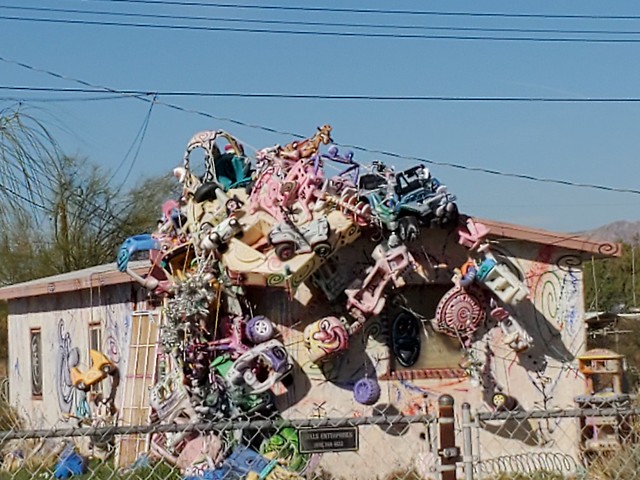 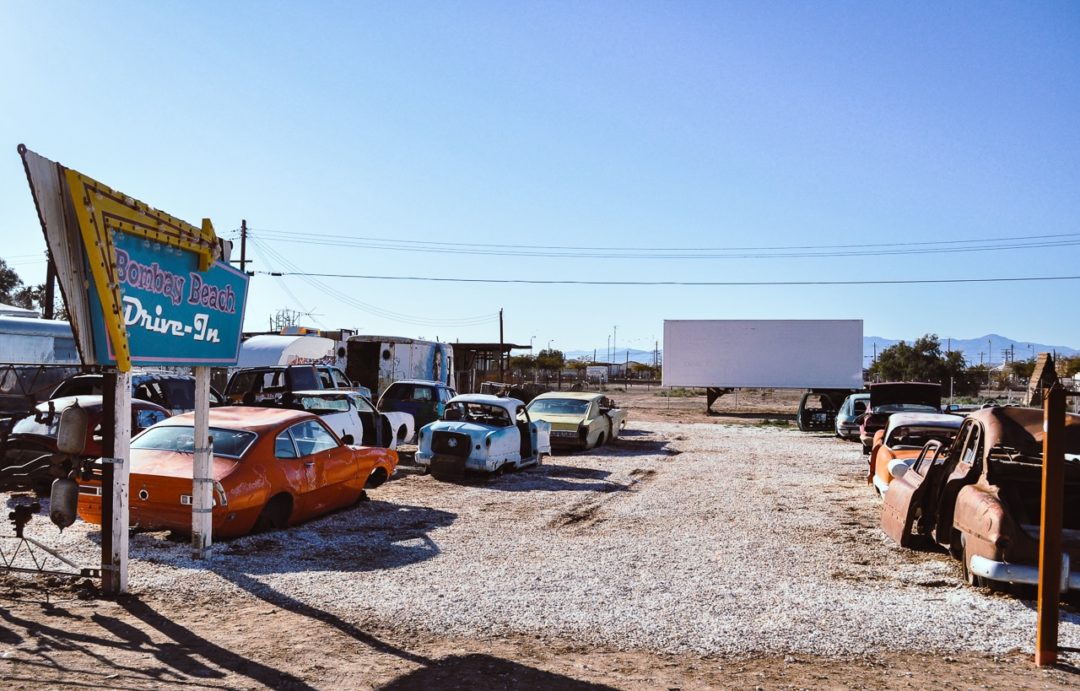 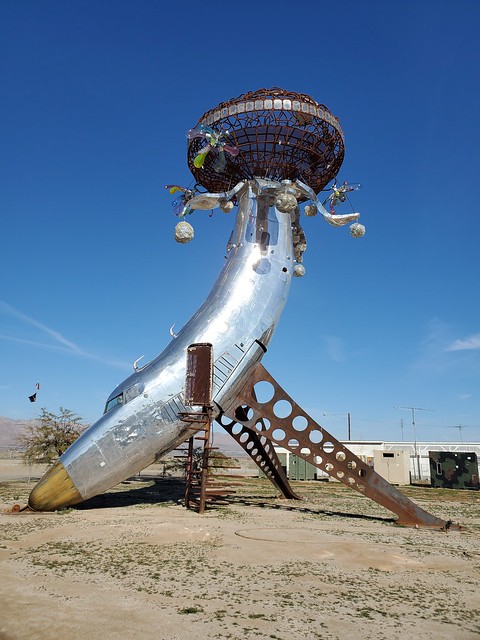 Lodestar, which has also appeared at Burning Man and the Coachella Valley Music and Arts Festival.

The night before we left Borrego Springs we joined Dave and Sue for a ride out to Fonts Point for snacks and to enjoy the sunset.  Fonts Point is a high, rocky point east of Borrego Springs with fantastic views of the Borrego Badlands to the south and Borrego Springs to the west.  You need a four-wheel drive vehicle to get there as it is a four mile drive off the main highway on a narrow road of soft sand. 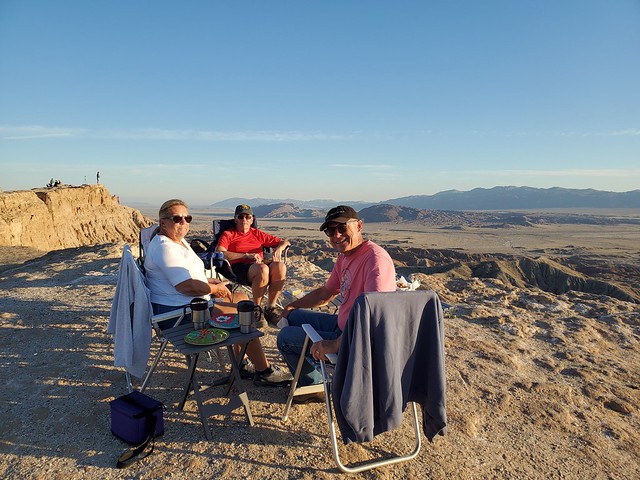 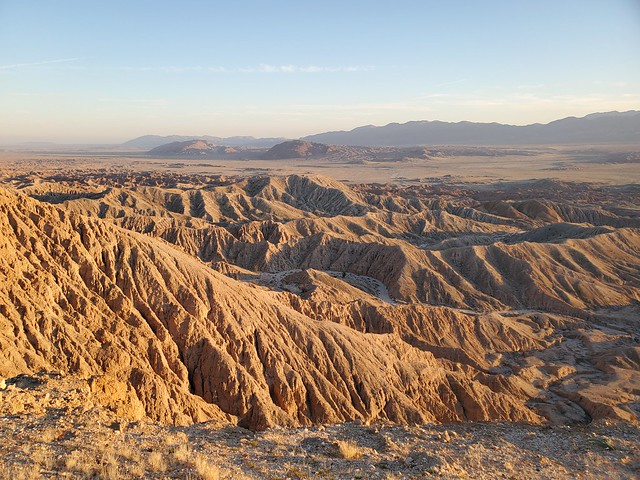 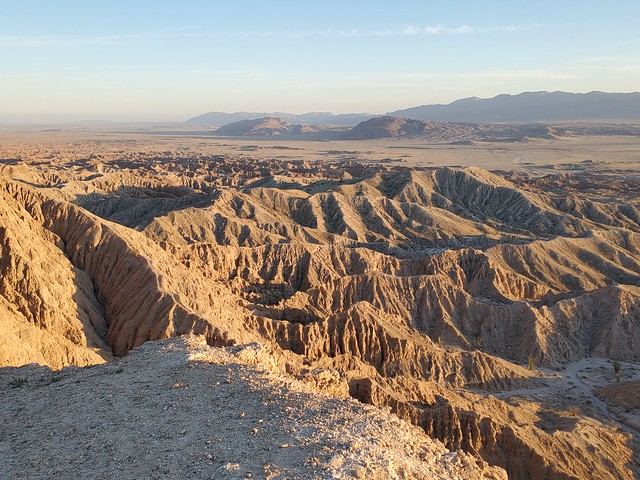 We are now heading back to Boulder City for a few months.   In May we’ll hit the road again for a trip north into Oregon and Washington.

20 Responses to A Little Winter Trip