A Visit to Mesa Verde NP

Posted on October 3, 2019 by placestheygo

We visited Mesa Verde for a few days last October, but rain and cold limited our exploration.  We returned this year to blue skies and warm temperatures, allowing us to visit a section of the park we missed last year. 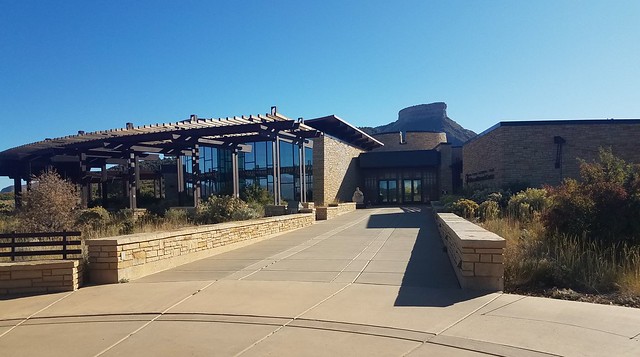 After a stop at the visitor center to check on conditions in the park we headed up the entrance road.  Mesa Verde is a huge park and we had a drive of about 25 miles to reach our destination, the Wetherill Mesa (the least visited section), named after a family of local ranchers who explored the area in the late 1800s. 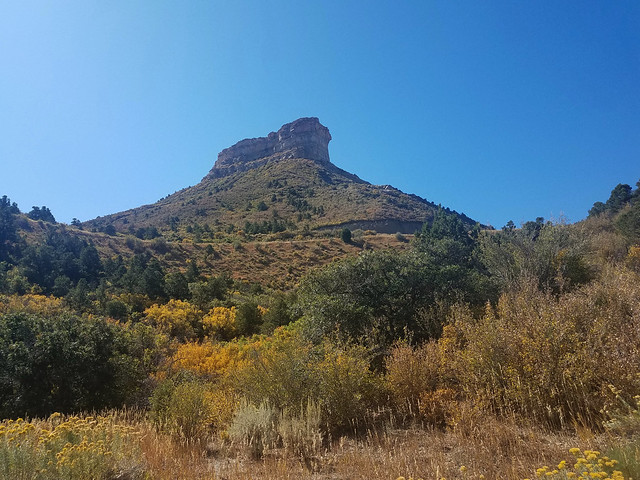 After a drive of about 27 miles we came to the end of the road on Wetherill Mesa.  From the parking area you can hike or bike to a number of ruins left by the Ancestral Pueblo  cultures.  During the summer a tram takes visitors around a loop road to all the sites, but it was not operating during our visit.  Once parked, the first thing we did was hike about a mile down a paved trail to the Step House Ruins. 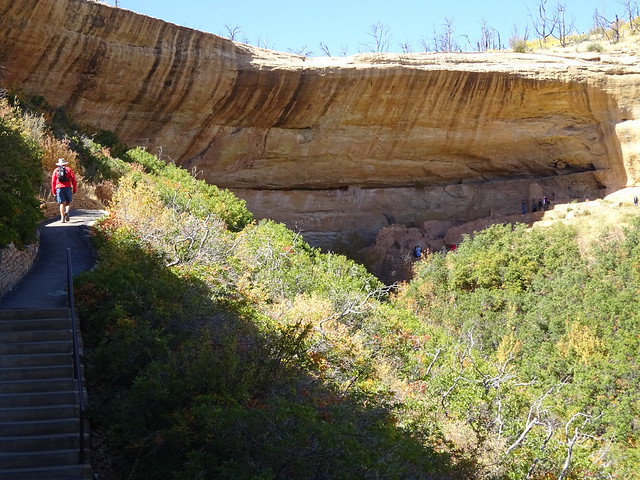 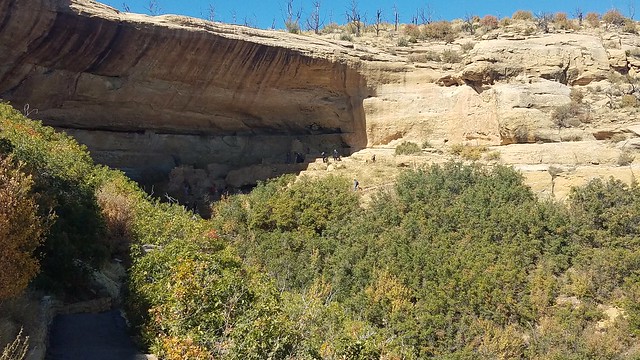 The alcove containing the ruins 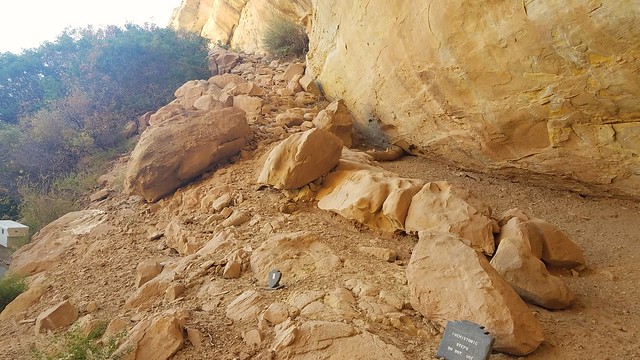 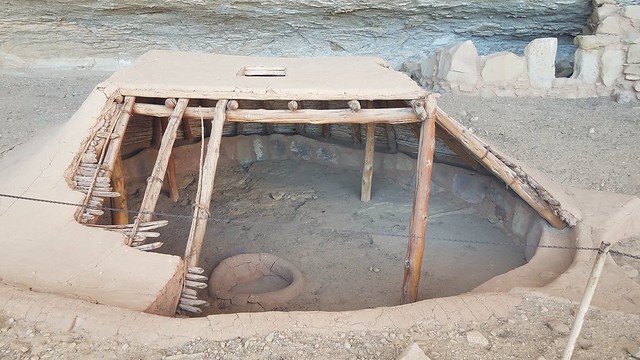 A reconstructed pit house which was standard housing for centuries

In 1891 Swedish scientist Gustaf Nordenskiöld carved “No21” in a rock, his identification number for the Step House as he and other were exploring and digging here.  Grooves near the number were used by the residents to shape and sharpen stone tools. 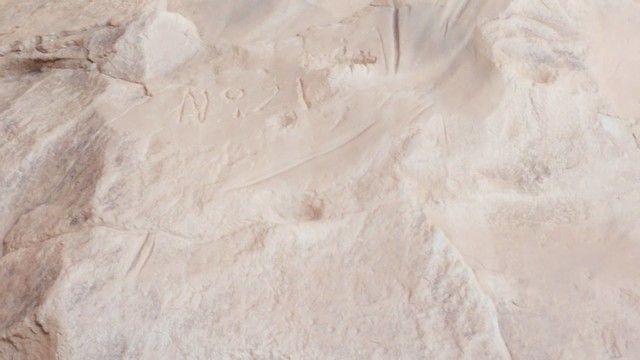 A short ladder allows access to the upper level of the ruins. 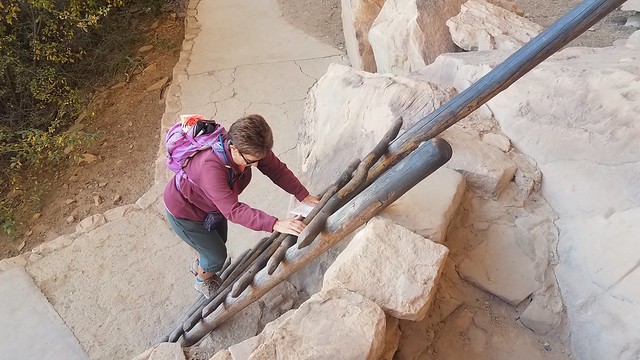 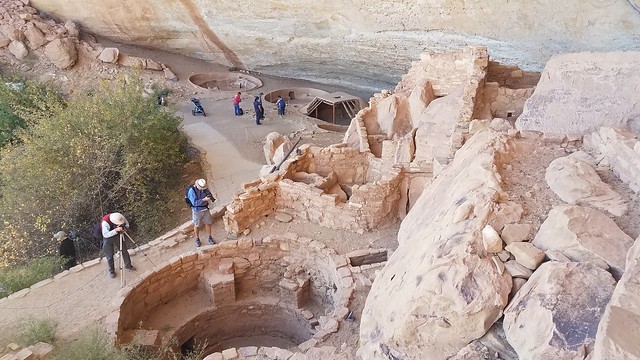 Looking down from the upper level 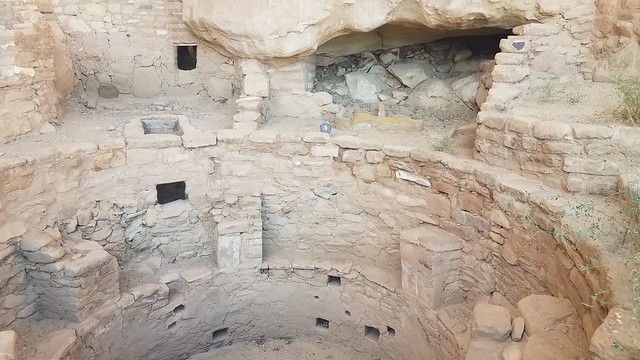 Large kiva in the upper level 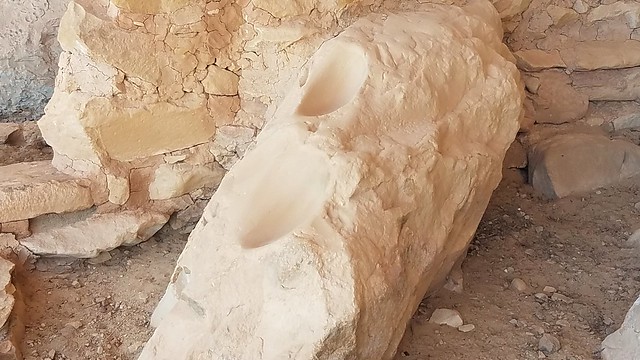 We returned to the parking area and picked up a trail leading to the south.  After a half mile we took a side trail to the right and hiked almost a mile to the Nordenskiöld Overlook.  The trail went through an area that had burned in the 2000 Pony Fire.  Fire is a frequent visitor to the mesa, mostly caused by lightning strikes. 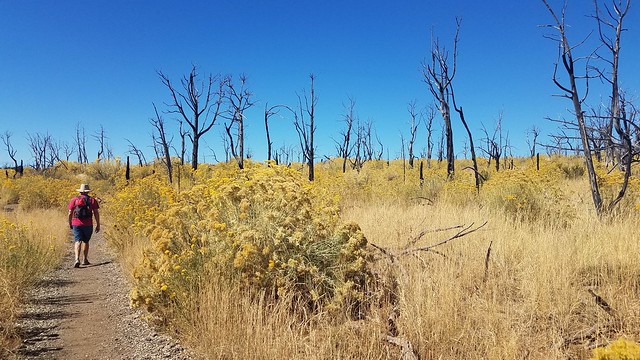 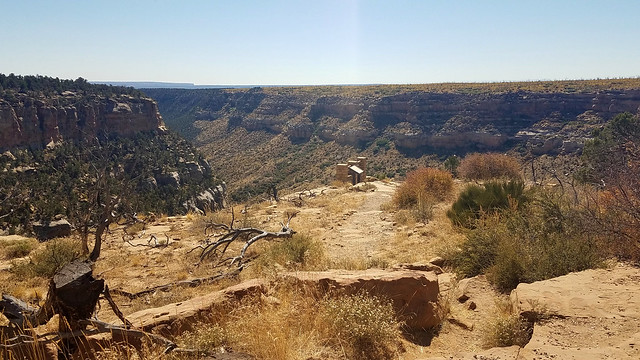 Across the canyon from the overlook is what is called Nordenskiöld Site #16.  There is no access to this site for visitors. 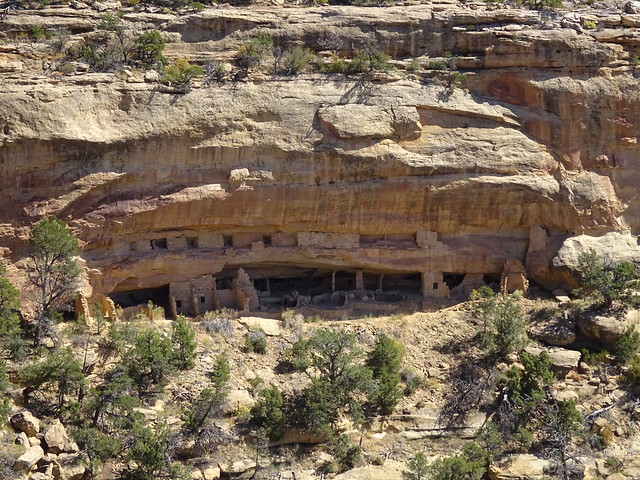 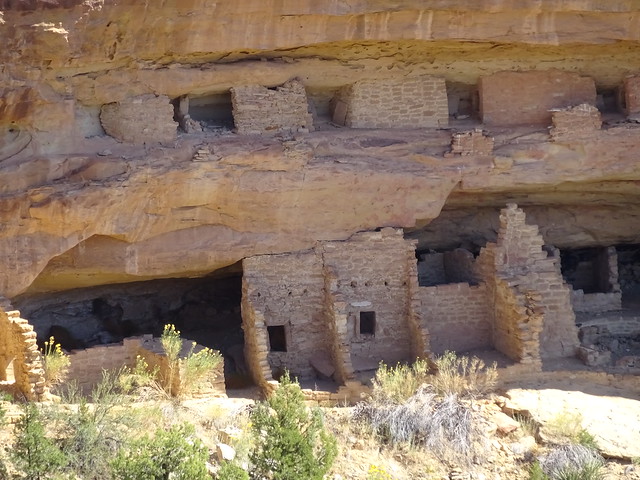 The upper area was used as storage 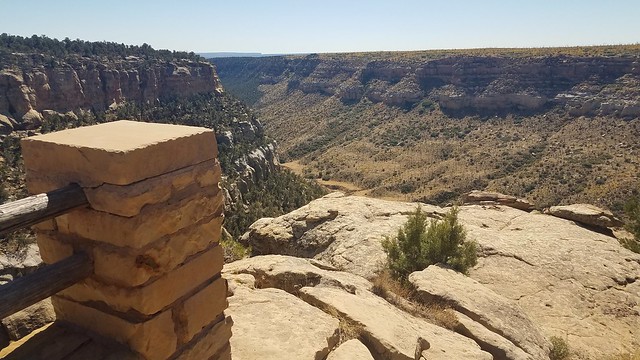 Looking south from the overlook

We hiked back to the main trail and continued south for about a mile to the Badger House Community.  The Badger House Community consists of mesa top dwellings.  There are  four covered sites along a paved and graveled trail.  Each of the sets of ruins in this area are protected by a metal building. The first building houses some Basketmaker pithouse ruins. 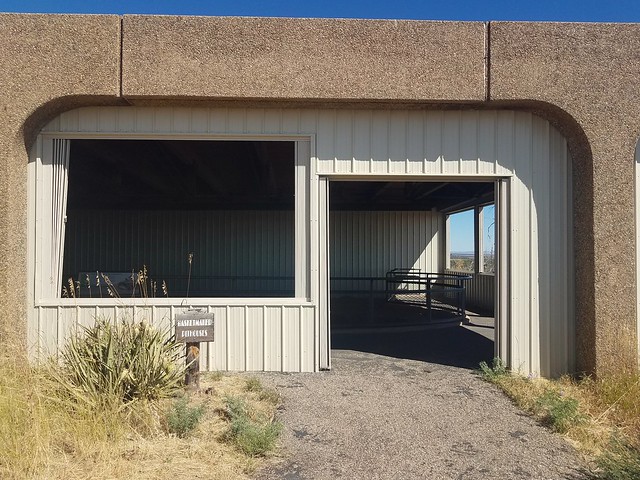 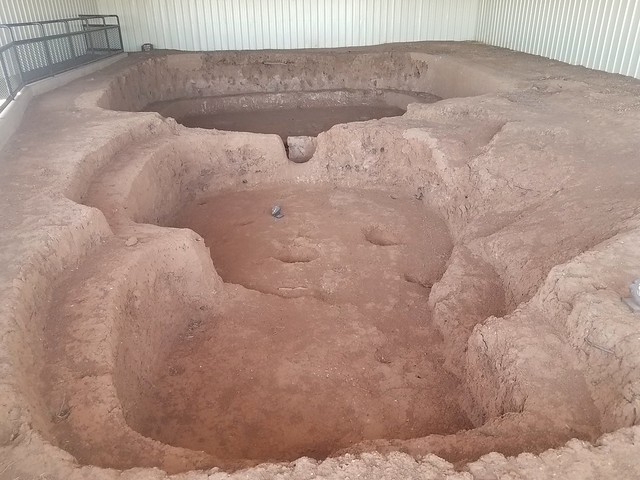 The next site is a pueblo village which is followed by the Badger House ruins. One of the nice aspects of these various sites is how they show the progression of the Ancestral Puebloan people over hundreds and thousands of years from the archaic nomadic type lifestyle through the Basketmaker and Pueblo times. 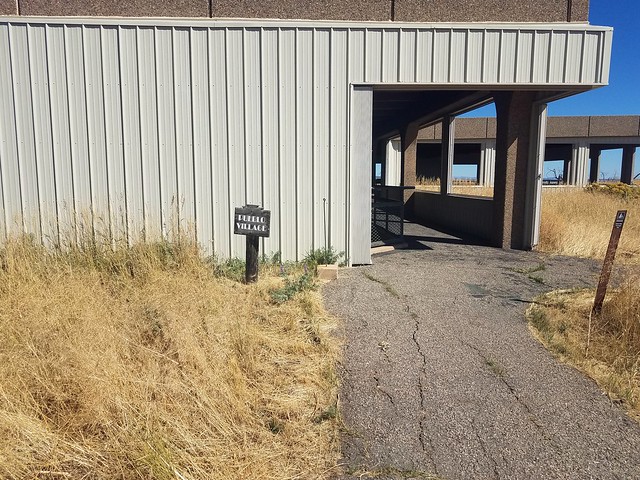 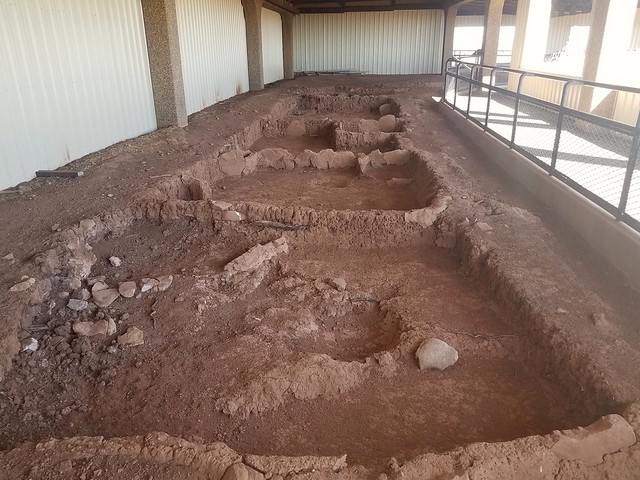 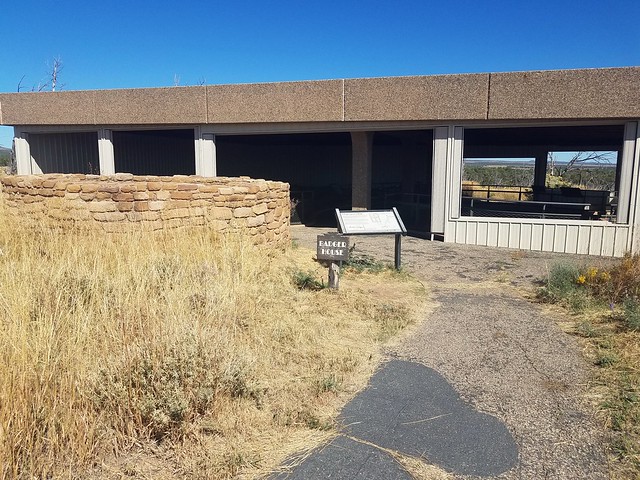 In the Kiva pictured below you can see an opening to a tunnel.  The tunnel ran into the remains of tower pictured above. 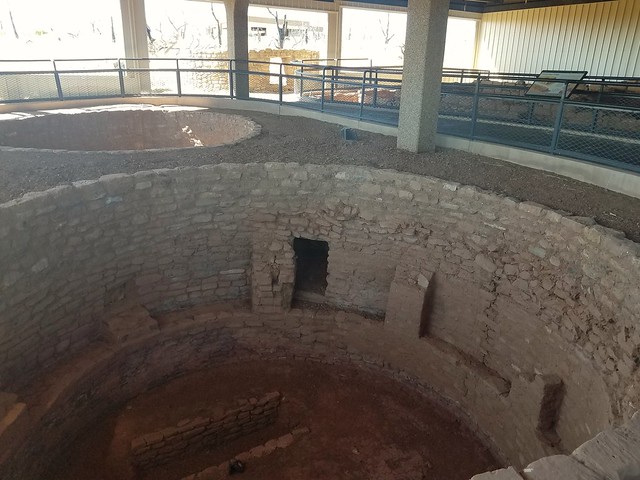 We left the Badger House Community and hiked a short distance to an overlook where we could look down at the Long House Ruins.  The Long House village includes about 150 rooms, 21 kivas, and a row of upper storage rooms.  It may have been home to as many as 175 people.  You can purchase tickets for a ranger led tour of this site. 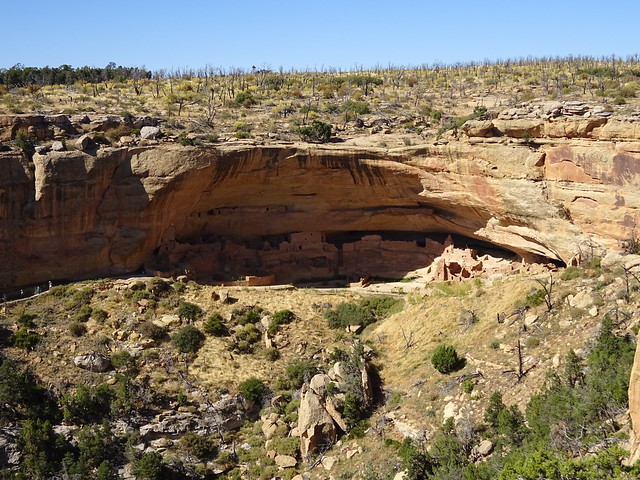 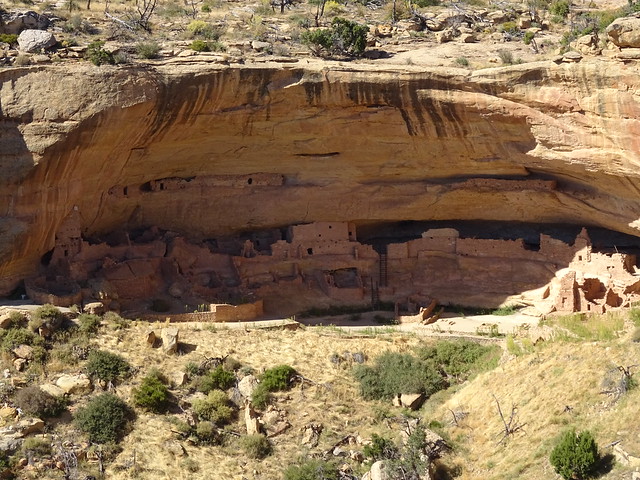 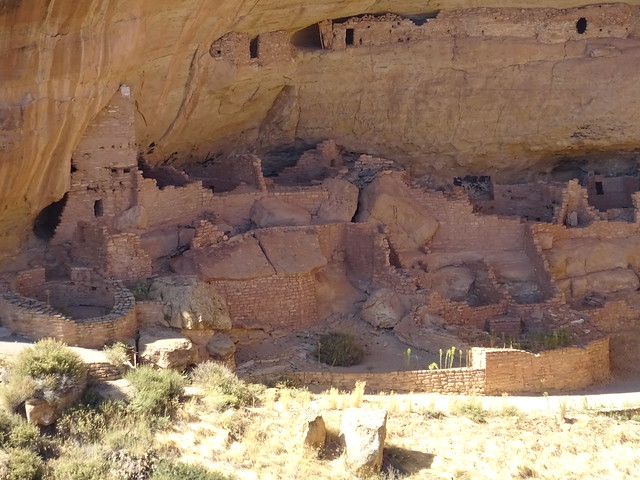 After hiking over five miles through the various sites we returned to the Jeep and headed back toward the park entrance.  A number of viewpoints along the way provide great views of the valley to the north. 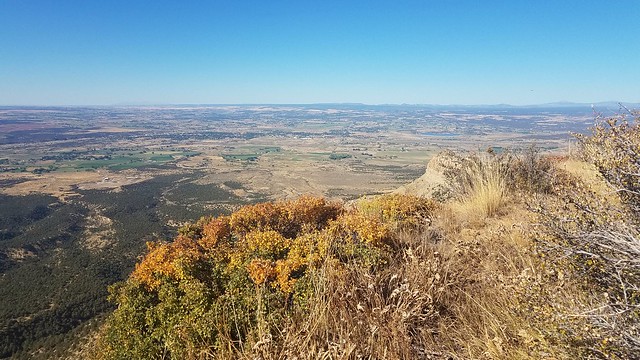 Looking down on Cortez

The next day we moved about 75 miles west into Utah to visit the little community of Bluff.  We’ve stayed here many times before to hike the many canyons in the area, but this visit is just a one night stop.  What we really came here for was to have a bowl of delicious chicken noodle soup at the Twin Rocks Diner.  Unfortunately they have their off season menu and don’t have the soup now!

19 Responses to A Visit to Mesa Verde NP