The Black Canyon of the Gunnison

Posted on September 30, 2019 by placestheygo

One of the main reasons we wanted to visit this part of Colorado was to explore the Black Canyon of the Gunnison National Park.  We left the town of Gunnison and drove back east on US 50 for a stay in the town of Montrose so we would be closer to the park entrance.

The Black Canyon is a 48 mile long section of the Gunnison River.  The deepest section of the canyon is the 12 miles that are within the national park. The canyon’s name owes itself to the fact that parts of the gorge only receive 33 minutes of sunlight a day.  The park is basically in three sections: the East Portal, the South Rim, and the North Rim.  While you could see almost everything in one day, we took three days and visited one section each day.

The East Portal is a small section of the park right along the Gunnison River.  It is accessed by a narrow, paved road that begins just past the park entrance.  The road is extremely steep (16% grades) with hairpin curves. Vehicles with an overall length greater than 22 feet are prohibited. 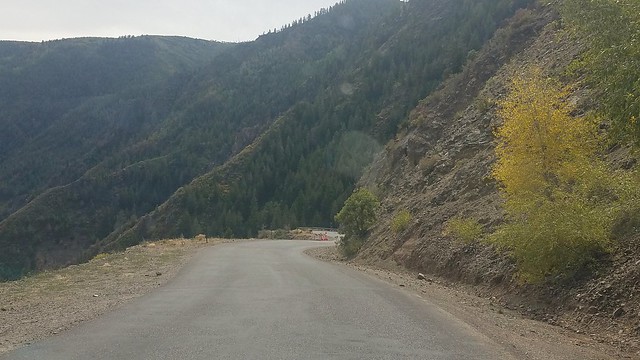 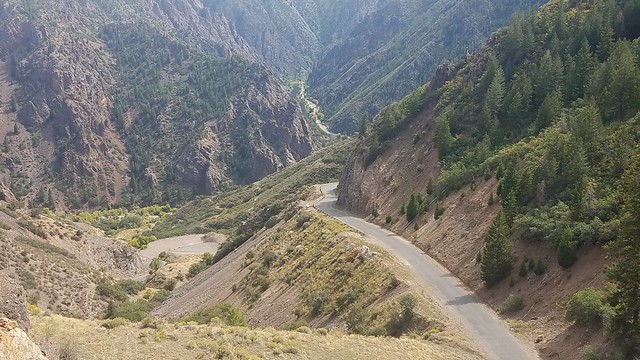 After a five mile drive steeply down and around numerous curves, we arrived at the fairly tranquil Gunnison River. 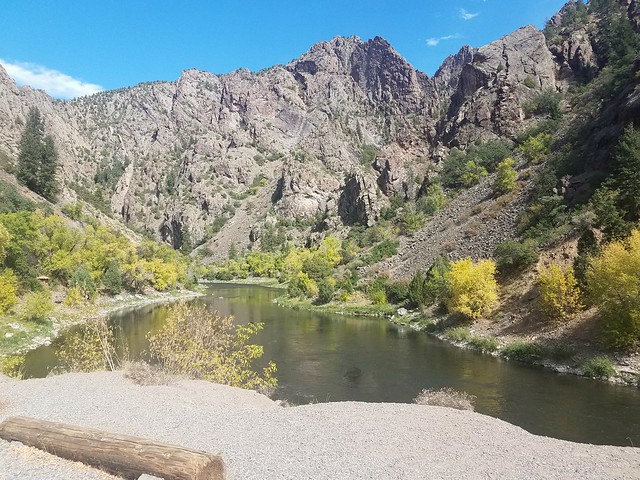 The main feature of East Portal is the Gunnison Tunnel.  The Gunnison Tunnel is an irrigation tunnel constructed between 1905 and 1909 by the U.S. Bureau of Reclamation.  At the time of its completion, it was the longest irrigation tunnel in the world and quickly made the area around Montrose into profitable agricultural lands.  The 5.8-mile tunnel cut right through the sheer cliffs of the famed Black Canyon, taking water from the Gunnison River and funneling it to the semiarid Uncompahgre  (Un-come-PAH-gray) Valley to the west. 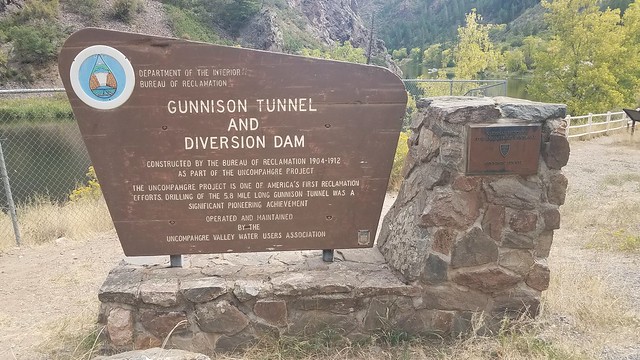 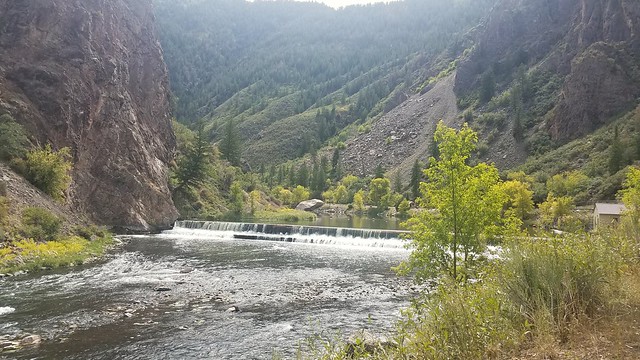 The tunnel is 5.8 miles long and is 11 by 12 feet in cross-section, with square corners at the bottom and an arched roof.  It drops about 40 feet over its length.  At the deepest, it is about 2,200 feet beneath the surface of Vernal Mesa. 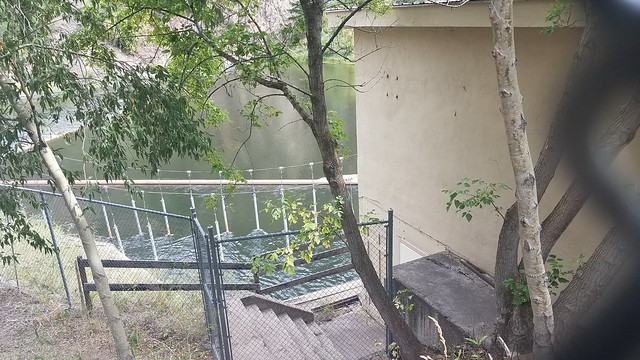 The ripples in the water show it flowing into the tunnel

There is a trail along the river downstream from the diversion dam.  It is mainly used for people fishing, but we decided to hike it to find a spot to have lunch. 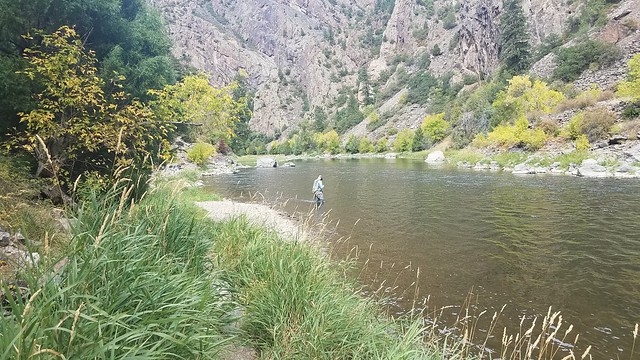 We only hiked about a mile before large areas of rock slides made the going a bit too rough.  Time to turn around. 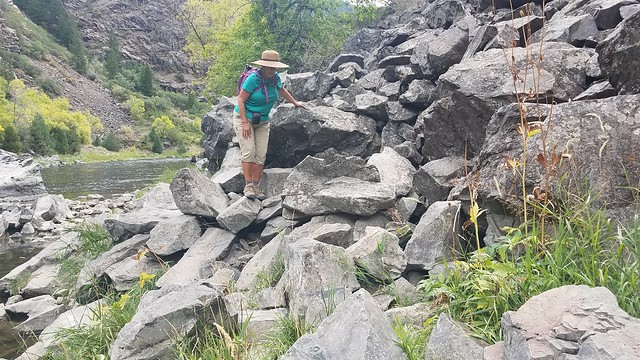 The South Rim Drive is 7 miles from Tomichi Point to High Point, and has 12 overlooks. Most are reached by walking a short trail.  There is a nice visitor center at the beginning of the drive where they show an informative video about the canyon.  After enjoying the video we did the drive and visited all the view points. 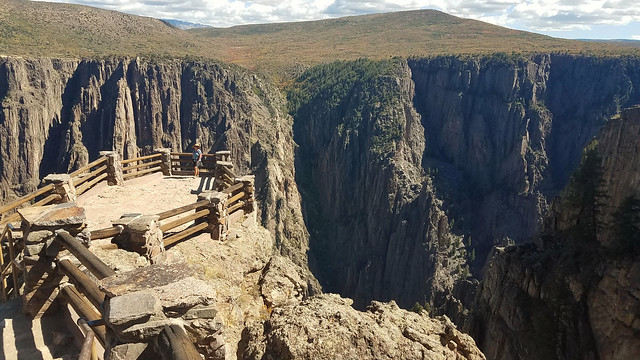 The first overlook behind the Visitors Center – Gunnison Point 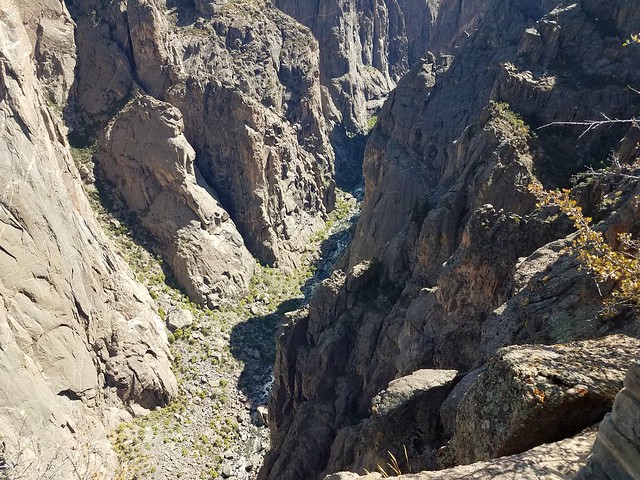 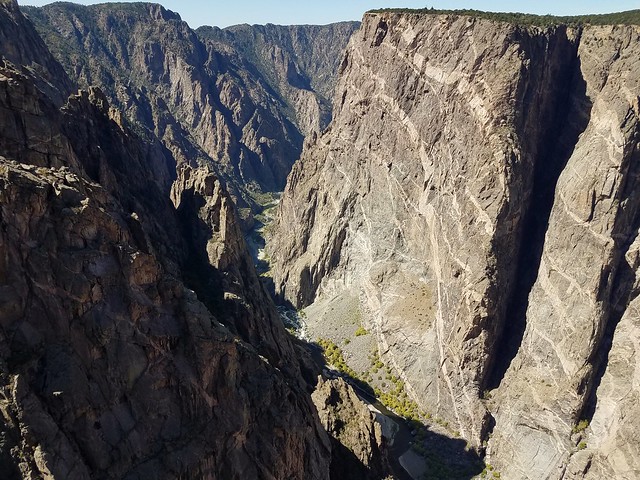 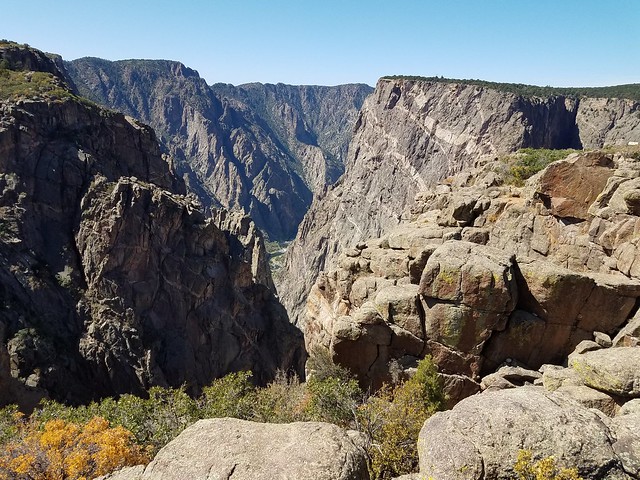 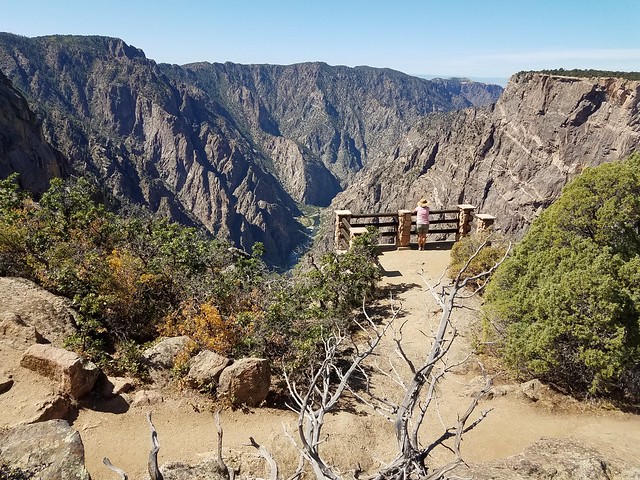 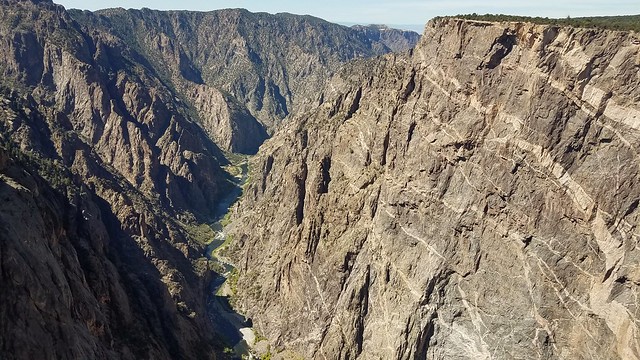 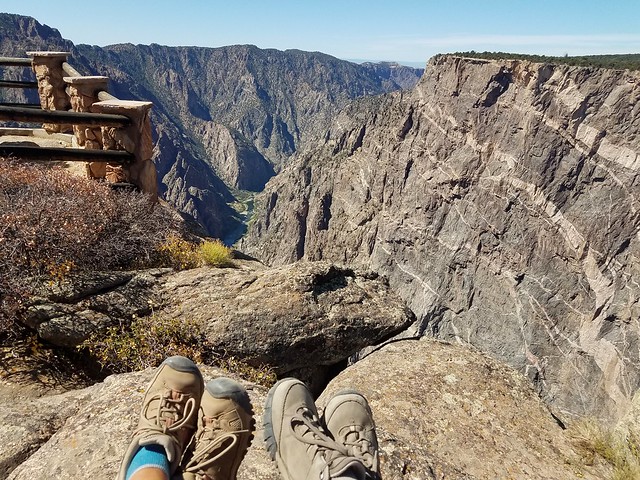 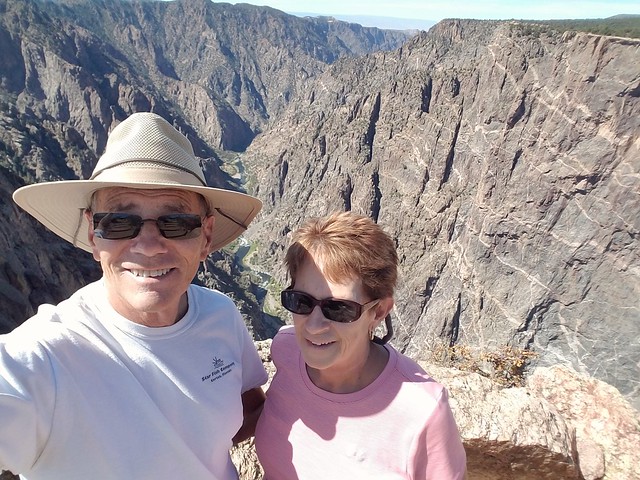 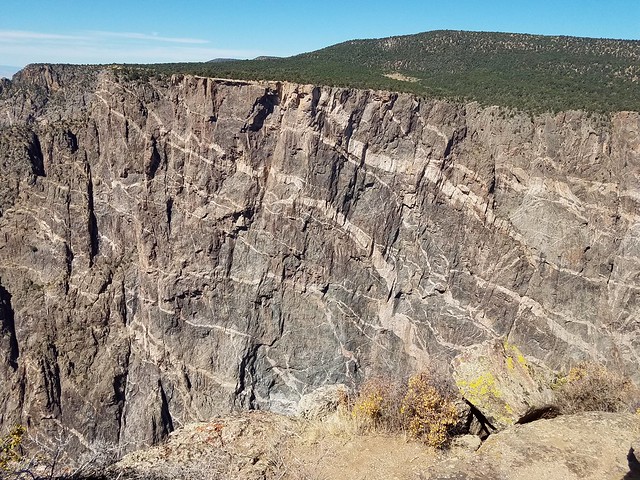 Most of the paths to the observation points were fairly short, about a quarter mile round trip.  But the last one required a hike of a bit over a mile to Warner Point.  We did every view point and ended up hiking about four miles total. 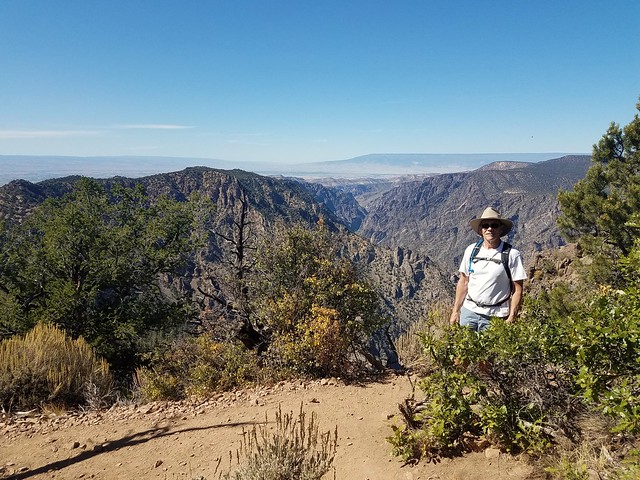 Near Warner Point at the north end of the national park

While the South Rim is easily accessed from Montrose by a 12 mile drive,  to reach the North Rim requires a 65 mile loop around the canyon. The North Rim Road provides access to 6 overlooks. The canyon walls on the North Rim are almost vertical, offering some of the most impressive views found in the park. 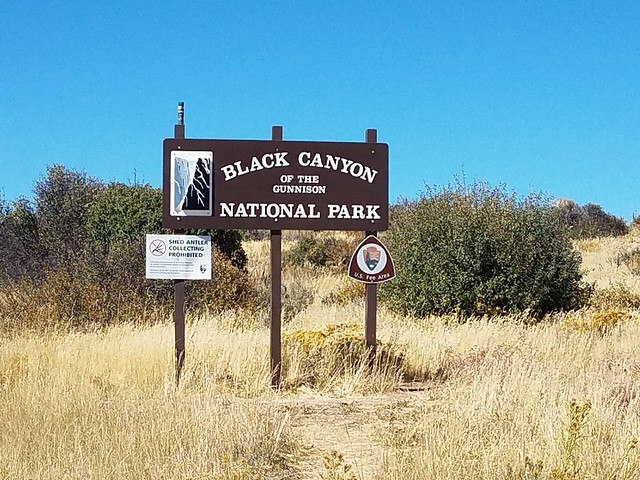 Although there are less observation points, we thought most were more impressive than those on the South Rim, and there were very few people sharing them with us. 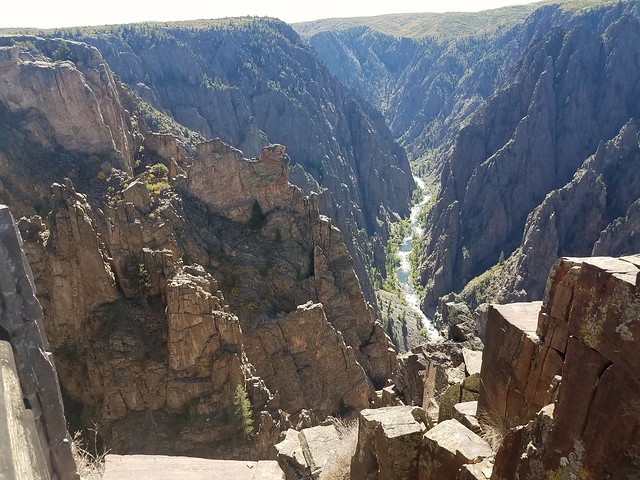 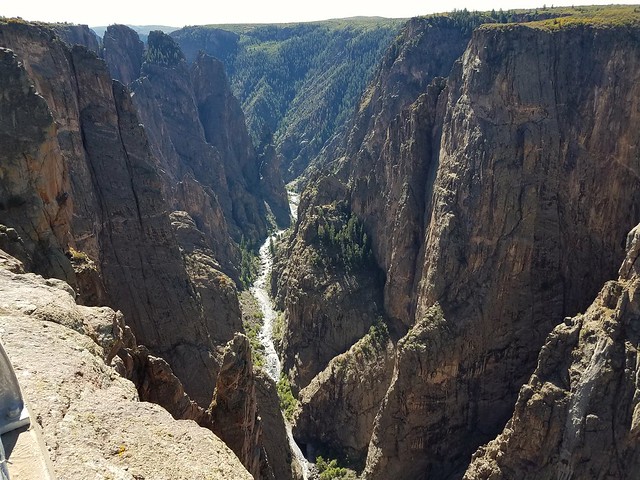 While most of the viewpoints on the North Rim are very near the road, Exclamation Point requires a hike of a mile and a half along the North Vista Trail. 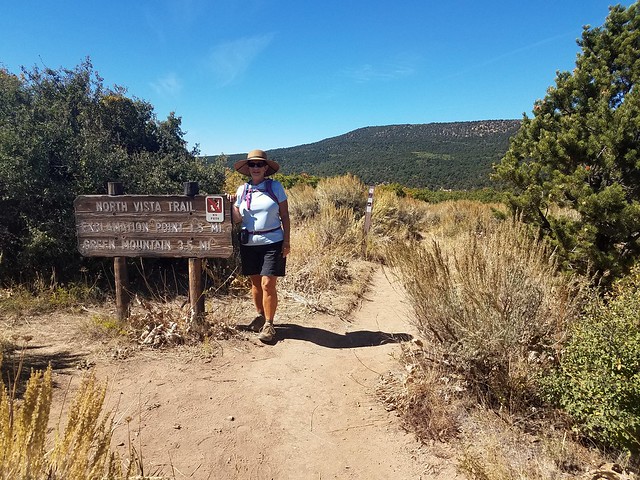 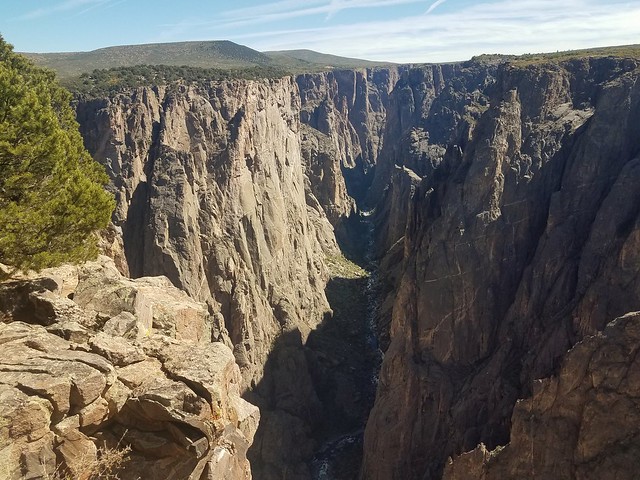 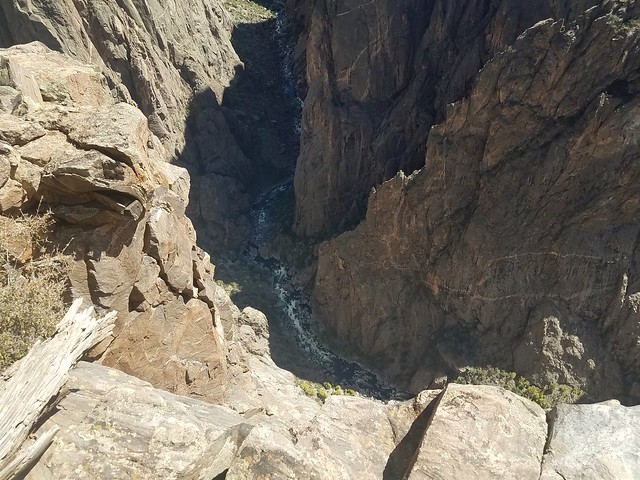 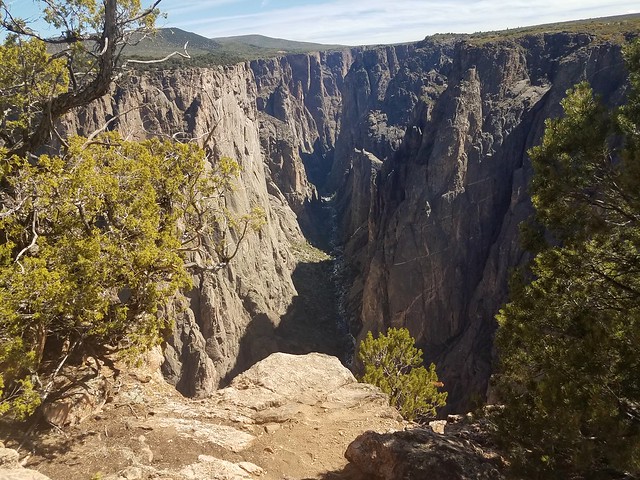 Our final adventure in the Montrose area was a drive up through the mountains to Owl Pass.  We’ll share that in our next blog.

20 Responses to The Black Canyon of the Gunnison