A Ghost Town, an Old Mine, and a Dams – Gunnison, CO

Posted on September 28, 2019 by placestheygo

We did a number of small hikes and drives while in the Gunnison area, but we’ll share two of them with you.  The day before the Jeep was scheduled to be repaired (new fuel line) we again used Joe and Gay’s blog (good-times-rollin) to find a drive to a neat little semi-ghost town not far from Gunnison, with a short hike to an abandoned mine thrown in.

Pitkin, founded in 1879, was the first mining town in Colorado west of the Continental Divide.  By June of 1882 there were over 60 business structures and 300 to 400 residences.  It had a population of over 1,000 and the surrounding hills were bursting. 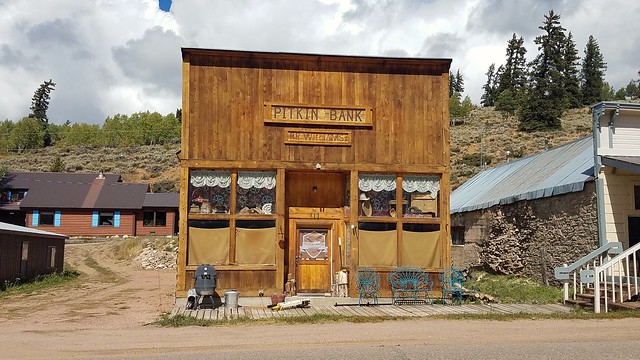 The town’s early success began to fade by the summer of 1882.  Mineral veins that were rich near the surface began to play out and didn’t justify further development.  By the spring of 1883, Pitkin had lost half its population. 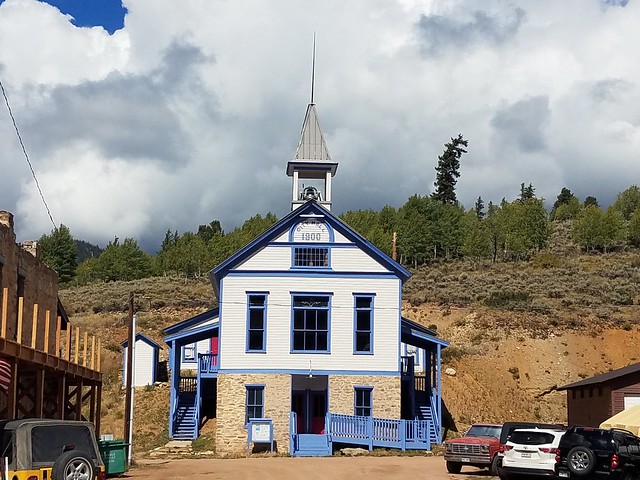 In the 1920’s and 30’s the timber industry and the fish hatchery helped to keep Pitkin alive.  The depression of the 1930’s caused further reductions in population to below 100 people, where it has remained.  During the Winter Pitkin has 80 year round residents, but summertime brings the count up to between 200 and 300. 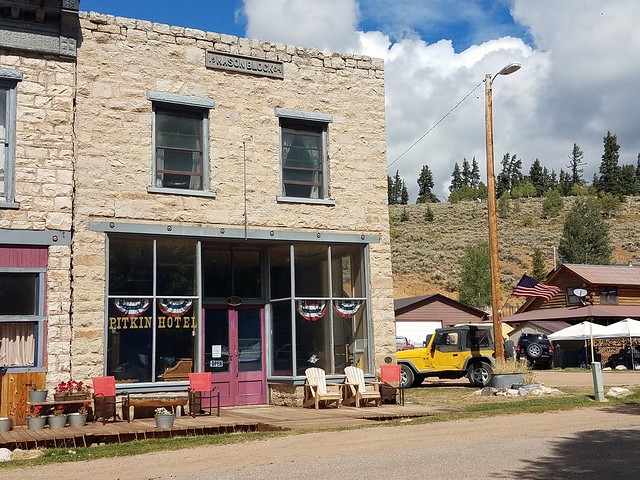 While the main street consists mainly of original buildings (nicely maintained) many of the houses looked to be pretty new, so there is new life in the town as it has developed into a summer destination for riding ATVs and mountain bikes. 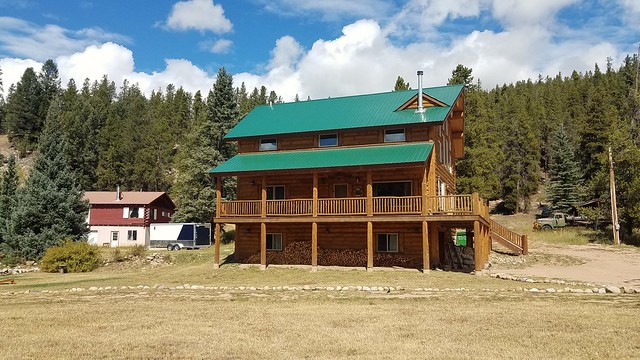 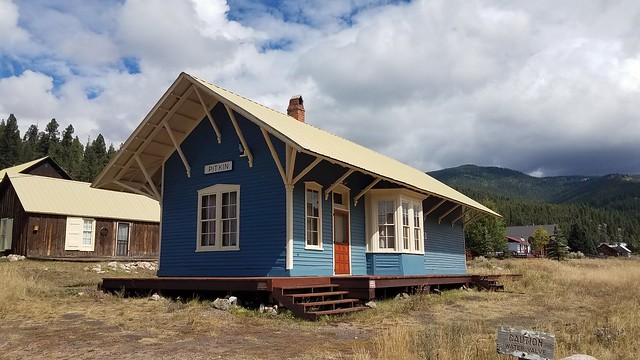 Joe and Gay also alerted us to a short hike to an abandoned mine that began just off the main road a few miles south of the town .  We found the trailhead on the east side of Rte. 73 in a small pull over parking area. 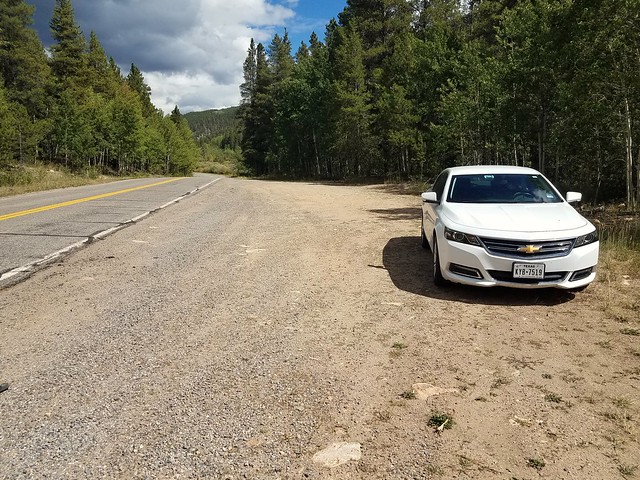 Our rental in the parking area 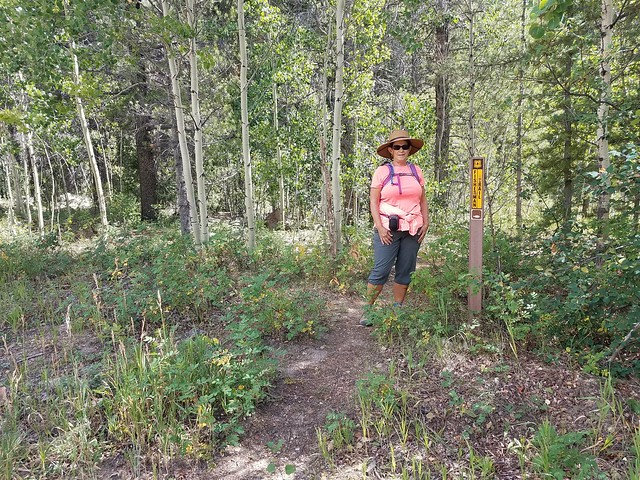 After a short distance the trail went across Quartz Creek and continued north along side the creek. 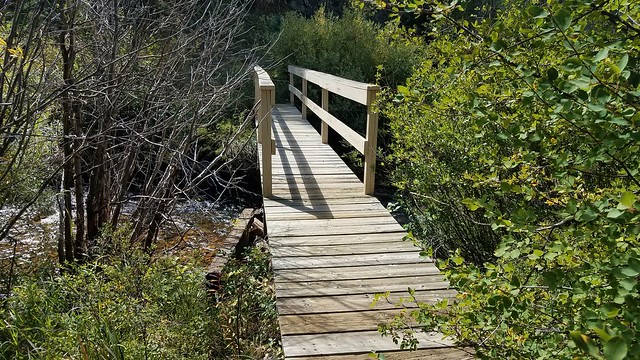 We soon came to the remains of a power plant along the creek that provided electricity to the nearby mine. 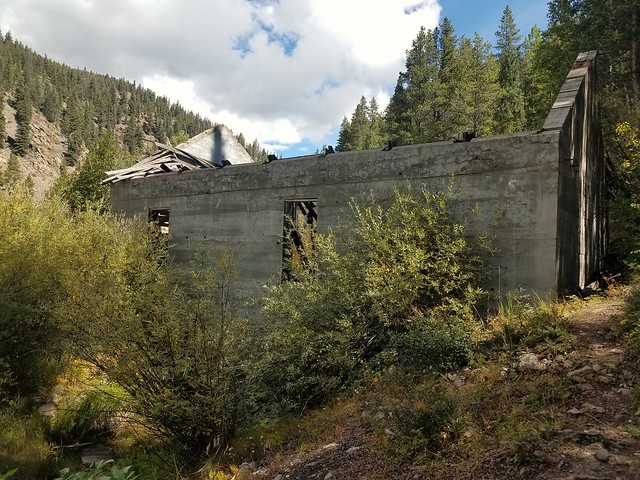 The trail went steeply uphill above the power plant to a two track road.  We followed the road around a switchback up to the entrance to the mine.  We’ve visited many abandoned mines in our travels, but have never seen such a cool entrance. 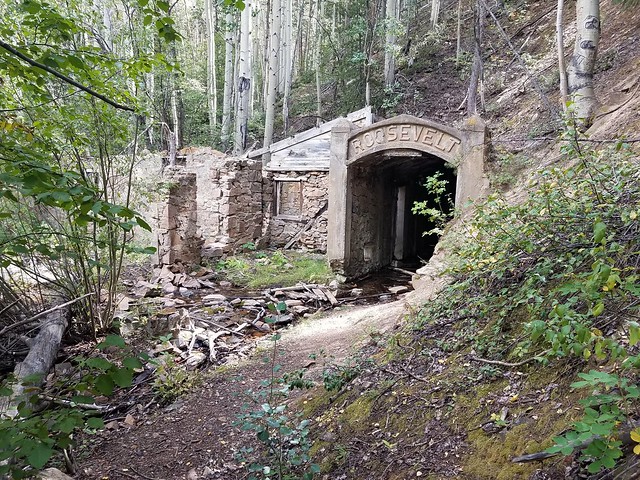 The Roosevelt Mine opened in 1907 with a great deal of promise and operated into the 1930’s.  But low grade ore and some sort of controversy stopped its operation.  We couldn’t find any information of where the mine got it’s name (OK, Theodore Roosevelt was the president so that may have something to do with it) or what the controversy was.

Later in the week we drove west on US 50 about 25 miles past the Blue Mesa Reservoir to the Pine Creek Trailhead, located just a few miles west of the Blue Mesa Dam.  This trail is typically utilized for a boat tour on the south side of the Black Canyon to the Morrow Point Reservoir. The trail starts with a 180 foot (232 stairs) descent to the river/reservoir, then follows the Gunnison River for a little over a mile along a former narrow gauge railroad bed.  The trail eventually ends where the river banks are too narrow for a trail. 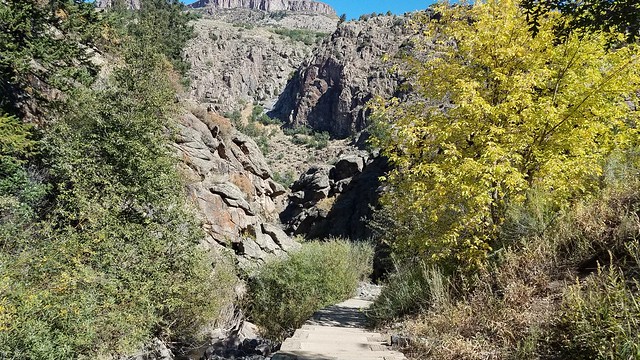 Looking down the stairs at the start of the trail 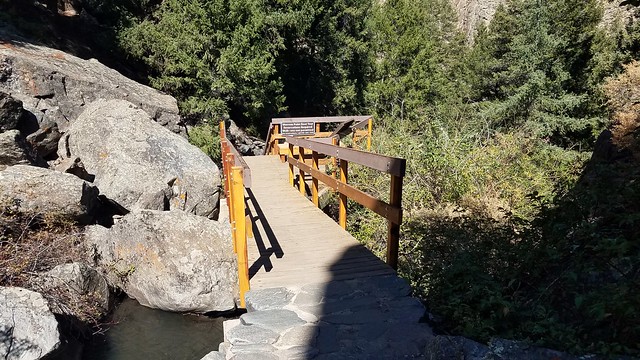 Crossing a small stream on the way down 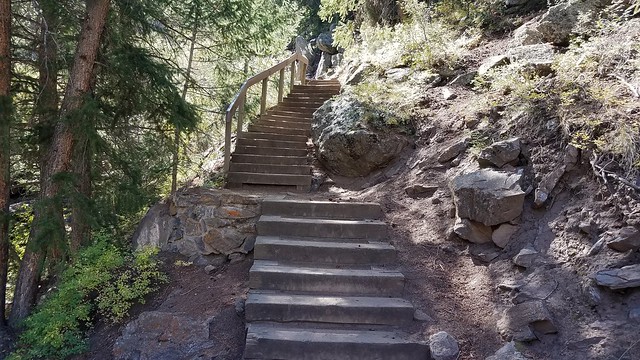 Once section of stairs

The Gunnison River below 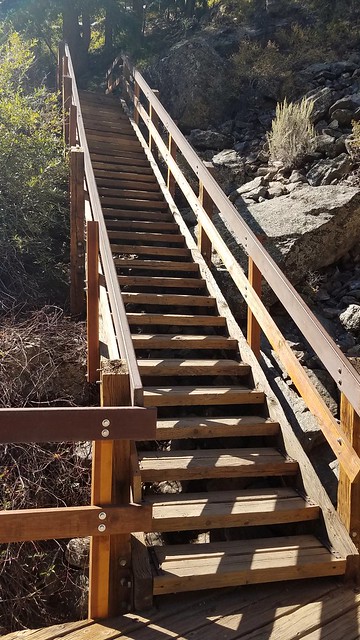 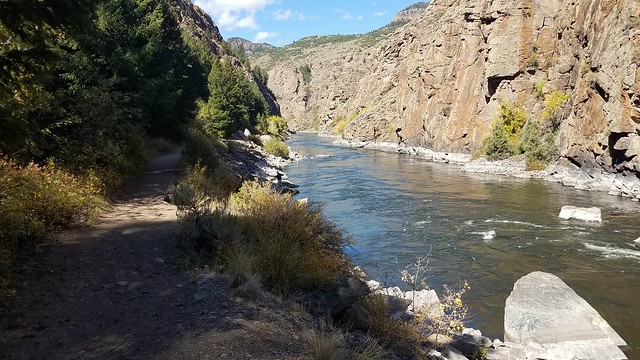 Down on the trail, finally!

At the base of the stairs the river is mostly rapids.  But soon it widens a bit and turns tranquil from the effects of the Morrow Dam located further down the river. 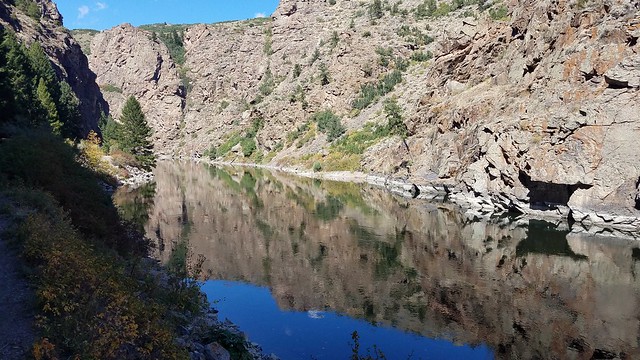 Three quarters of a mile down the trail we came to the dock used by the National Park Service for a boat tour during the summer.  We had inquired about taking the tour but the service stopped that Sunday and all tours were full the previous week. 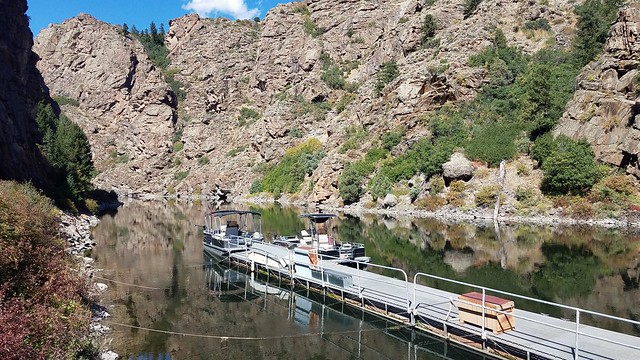 We continued beyond the dock, enjoying the beautiful views of the Upper Black Canyon of the Gunnison. 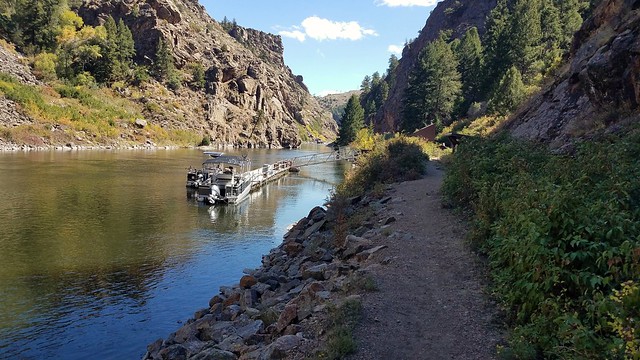 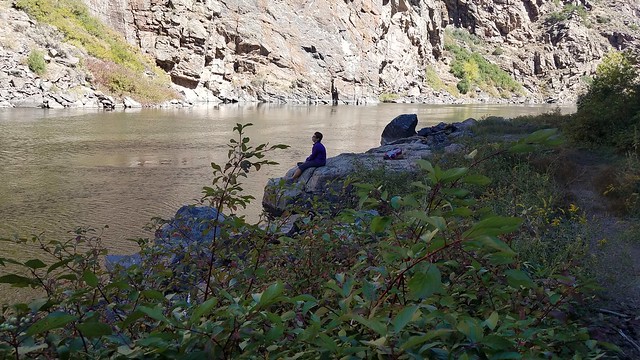 We returned back up to the parking lot (gravity was not our friend on those stairs) and drove across the Blue Mesa Dam, a 390 foot earth fill dam. 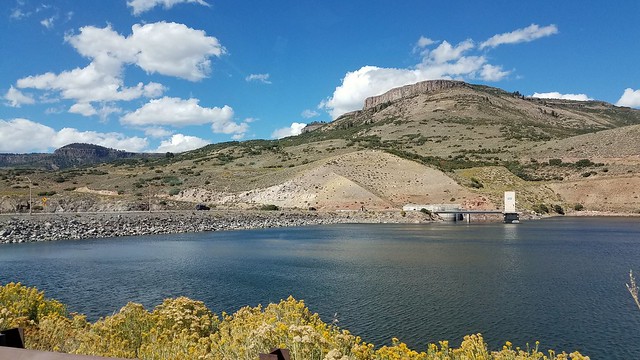 Blue Mesa Dam on the left 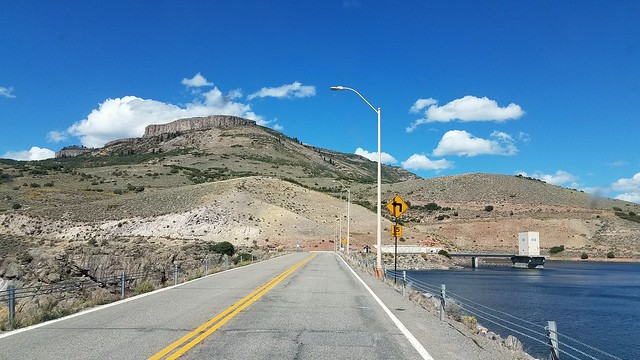 The road over the top of the dam

After crossing the dam on Rte. 92 it is a short drive up to an observation point where we could see the dam to our east and the boat dock on the river below us. 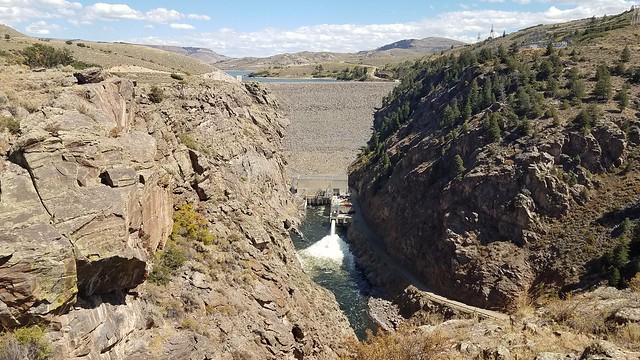 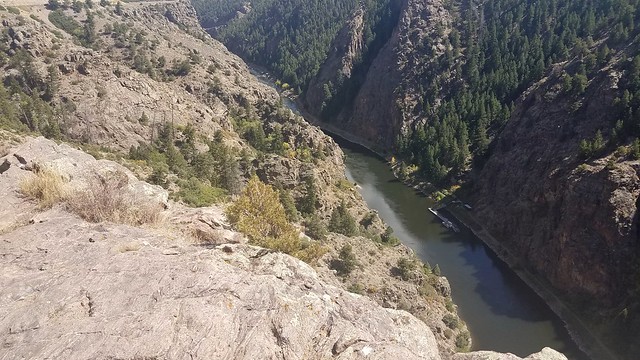 That’s the dock way down below

Driving back to Gunnison along the Blue Mesa Reservoir we enjoyed the spectacular views across the water. 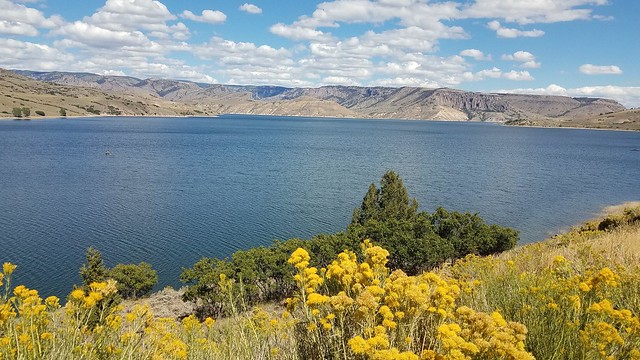 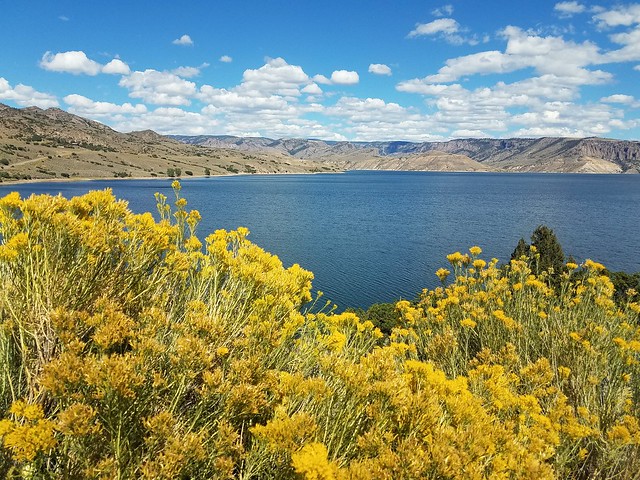 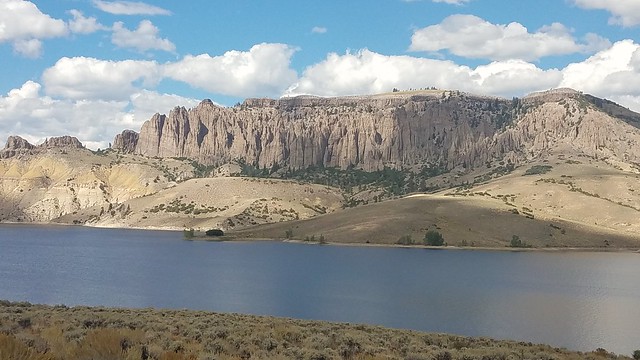 We are nearing the end of our stay in Gunnison but have one more adventure to share.  More on that later . . .

18 Responses to A Ghost Town, an Old Mine, and a Dams – Gunnison, CO