Posted on September 26, 2019 by placestheygo

We left Ridgway on September 13th and drove about 90 miles east to Gunnison, CO.  The drive took us through the town of Montrose (5,800′), where we will be staying next week, and across US 50.  After crossing over the Cerro Summit (8,000′) and the Blue Mesa Summit (8,850′) the highway parallels the Blue Mesa Reservoir, the largest body of water in Colorado. 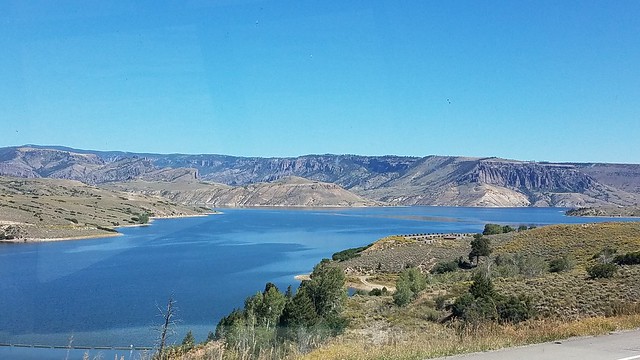 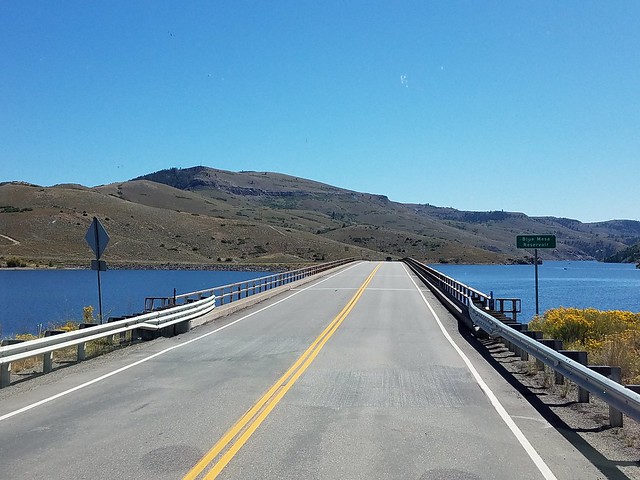 We easily found our home for the week at Palisades RV Park on the west side of the town and were escorted to our site.  Once set up we drove into town to check out the visitor center.  Upon our return to the park we hit a snag in our plans for the next couple of days. 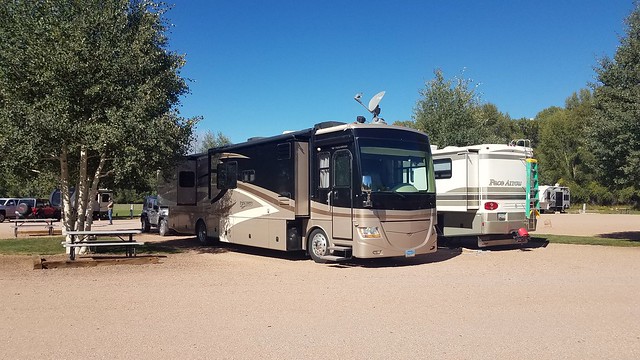 One day previous to leaving Boulder City, soon after having the oil changed, we detected the smell of gasoline in the garage.  John checked under the hood and the floor but couldn’t see anything leaking.  When no smell was detected the next day we decided it must have come from a passing vehicle and forgot about it.  But recently the faint smell has re-occurred.  Again, nothing appeared to be leaking.  But this time the smell was quite strong.  John again raised the hood (the bonnet to our English friends) and could see fuel leaking from the fuel line right in the center of the (hot) engine.  Not a good thing!  Of course it was approaching 4:30 on a Friday afternoon.  We found a nearby repair shop that had good ratings and was open on Saturday so John immediately headed there (1.5 miles away), fire extinguisher in hand, to check the place out and see what they could do.  Owner Robert of Robert’s Auto Repair looked at the Jeep and immediately called to order parts.  The parts would not be delivered until Tuesday so, since it was too dangerous to drive the Jeep, we spent Saturday walking around Gunnison and watching football, then rented a car for Sunday and Monday. 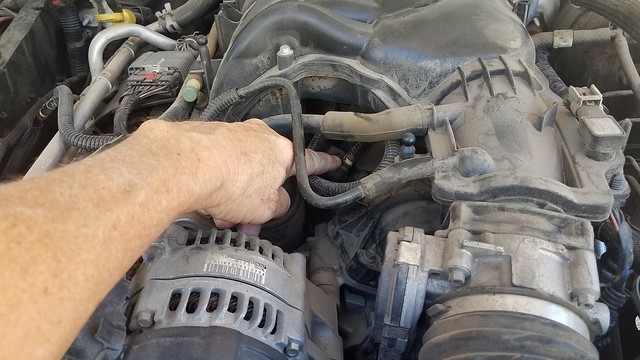 On Sunday we drove our rental car north about 25 miles to the ski resort town of Crested Butte (pop. 1,600 – elev. 8,900′).  This old mining town is a mixture of hippie/artsy types and the rich (most of whom reside in the nearby ski area of Mt. Crested Butte).  We went into Crested Butte to visit the weekly farmer’s market. 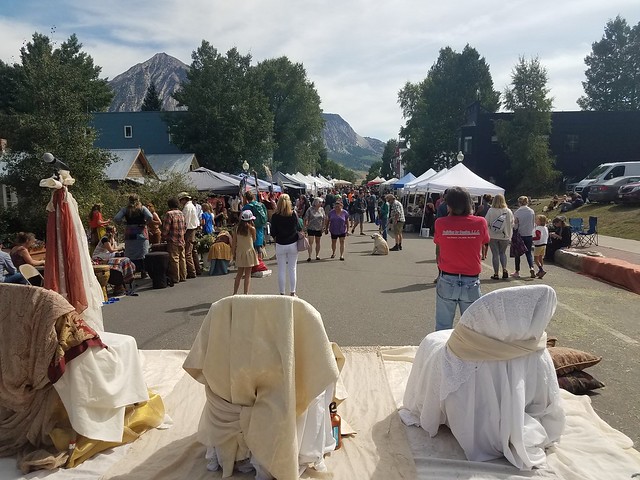 The farmer’s market was pretty good for such a small community.  As is typical, there were also many arts and crafts displays plus some sort of a strange festival going on with participants wearing weird costumes. 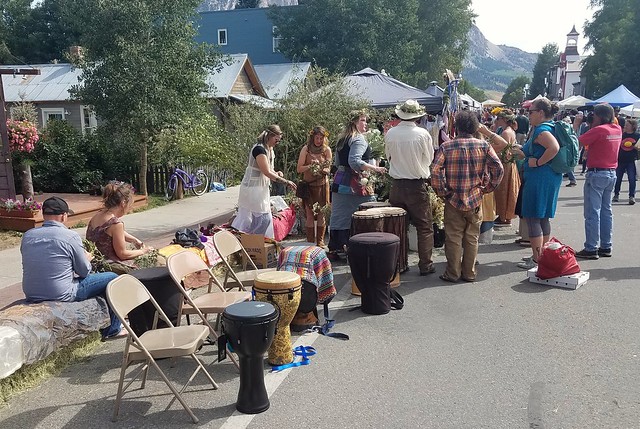 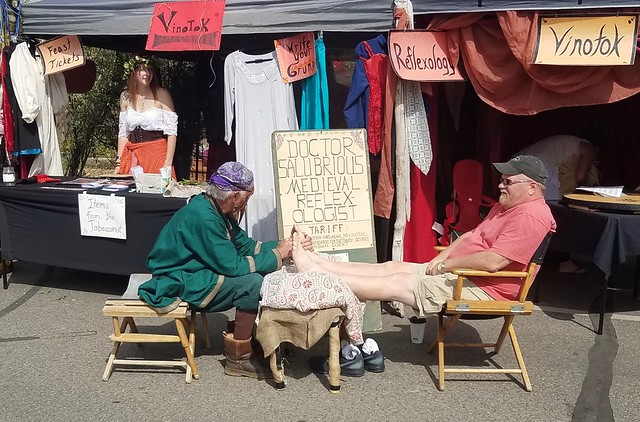 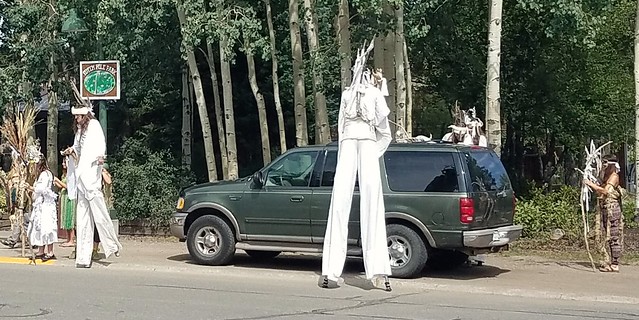 Festival participants coming out of a small park 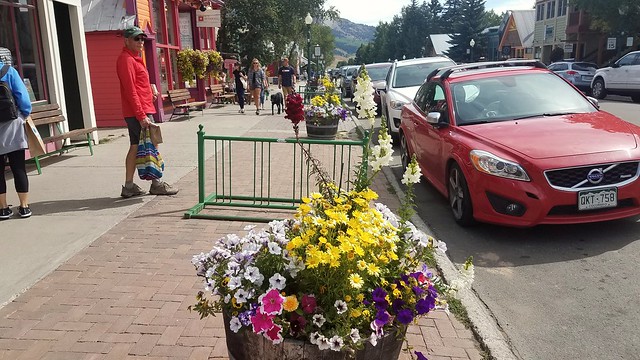 The main street of Crested Butte is very colorful

Friends Joe and Gay stayed a month in nearby Gunnison a couple years ago and we relied on their blog for many of our explorations in this area (good-times-rollin).   One of the hikes they did was the Three Lakes Loop.  Since it was a trail easily reached with our rented sedan, we decided to hike it.  To get to the trailhead we drove about 17 miles out Kebler Pass Road, a well-maintained dirt road, and turned south at the sign for the Lost Lake Campground.  After two or three miles, just before the campground, we found the large parking area for the trailhead. 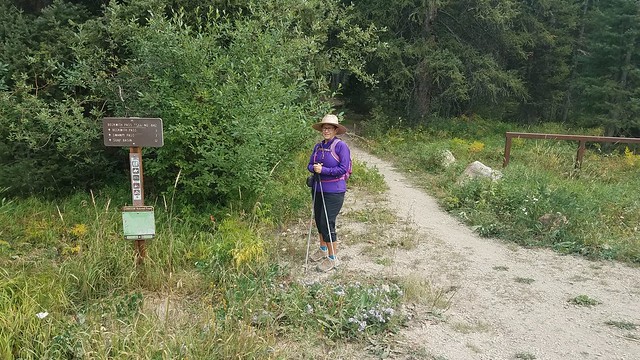 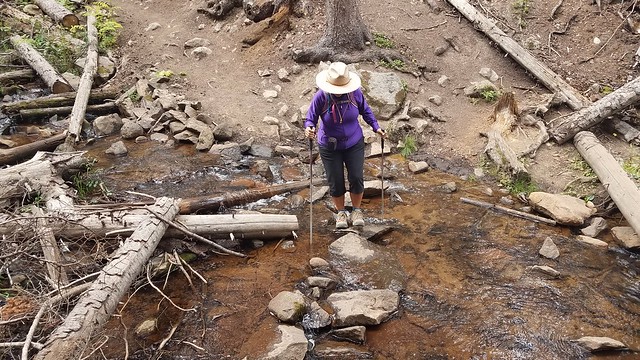 The trail took us up along the first of the three lakes, Lost Lake Slough.  The sky was cloudy during our hike, so we were disappointed in the views, and photos.  To see them on a sunny day check out Gay’s photos from their visit (see earlier link). 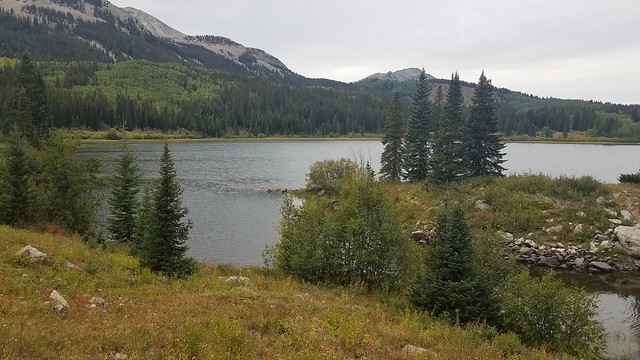 After passing the first lake the trail continued up the hillside. 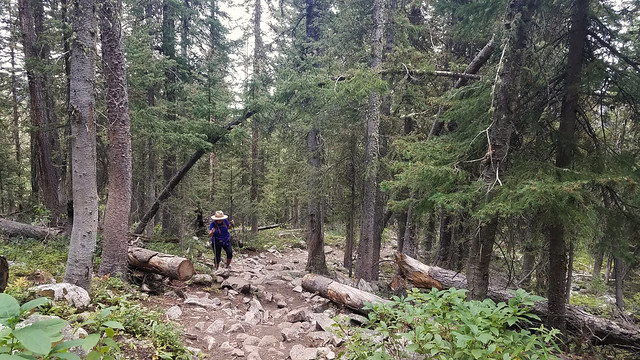 Rocky trail heading up the slope

At a “T” junction we turned left for a short hike to the second lake. 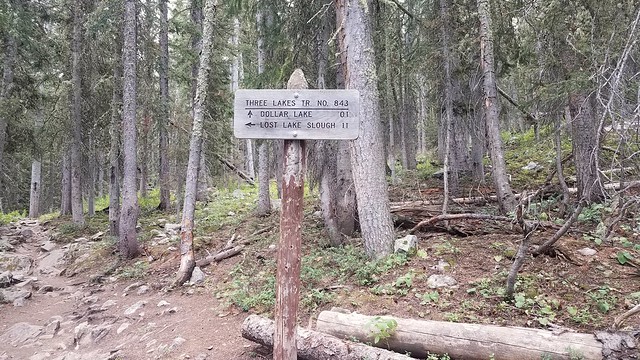 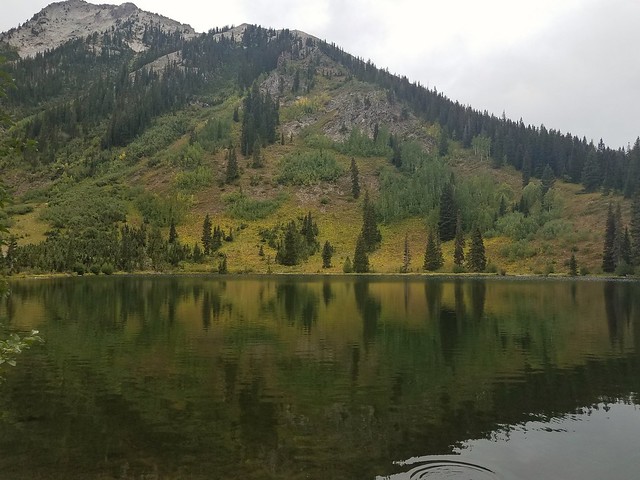 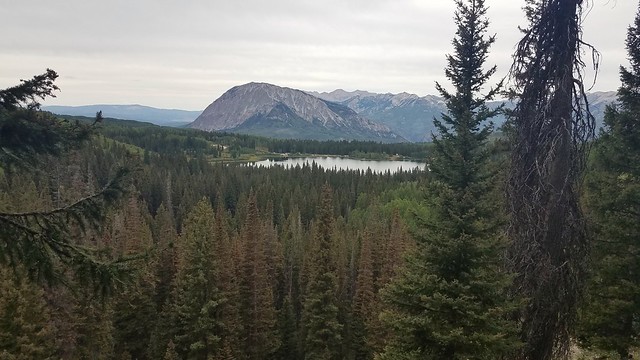 Lost Lake Slough in the distance

Returning back to the main trail we past a nice waterfall near the trail. 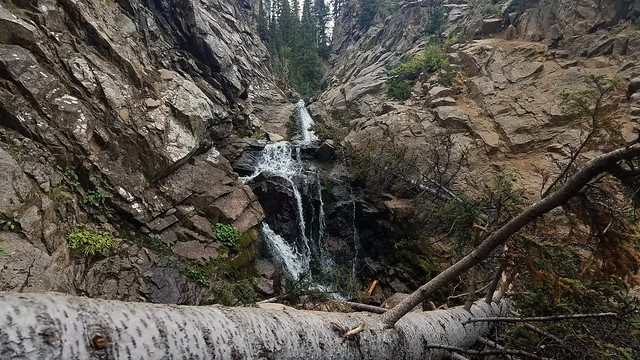 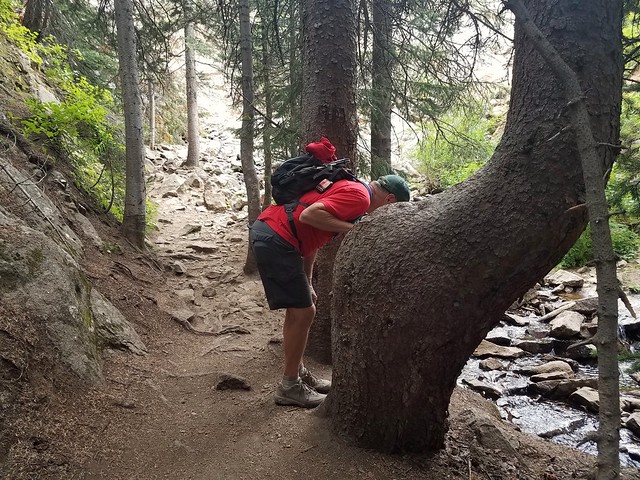 The elusive “Butt” tree in the wild!

After passing the waterfall the trail continued down the hillside to the third and final lake, Lost Lake. 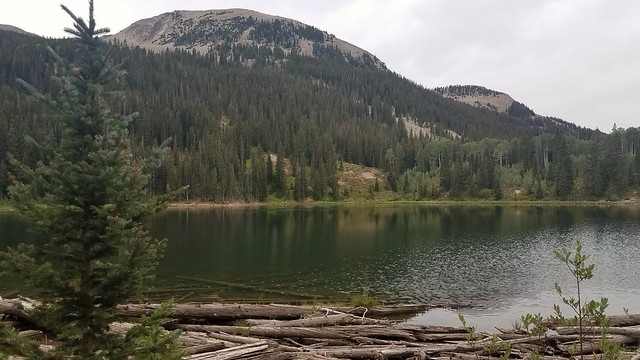 It was a short hike from Lost Lake back to the campground and parking area.  We enjoyed this hike but were disappointed with our photos due to the cloudy skies, especially when we looked at Gay’s beautiful photos taken on a sunny day!

We didn’t see any wildlife on either the hike or the drive but we were stopped by the flock of sheep in the photo below,

We wondered who was in charge of this group, but we soon drove by the boss who quickly forced them off the road and into the trees. 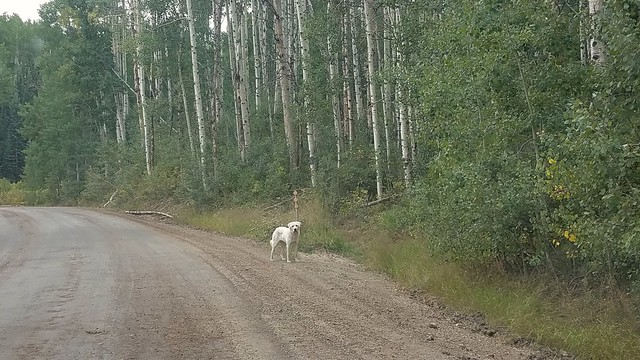 We have one more day until the Jeep is repaired so our next adventure will definitely not involve any rough terrain.  Chevy Impalas don’t have much clearance!