Posted on September 23, 2019 by placestheygo

Ouray’s Perimeter Trail is a unique six mile hiking experience that takes you up and around the town.  The trail begins across from the Ouray Visitor’s Center on the east side of US 550.  Parking space is available behind the Visitor’s Center.

To begin the hike walk across the main road to a large pink boulder, sign and tree.  The trail starts on a wood edged path north of a planted berm behind some condos.  It climbs wood stairs in the hillside to Cascade Cliff. 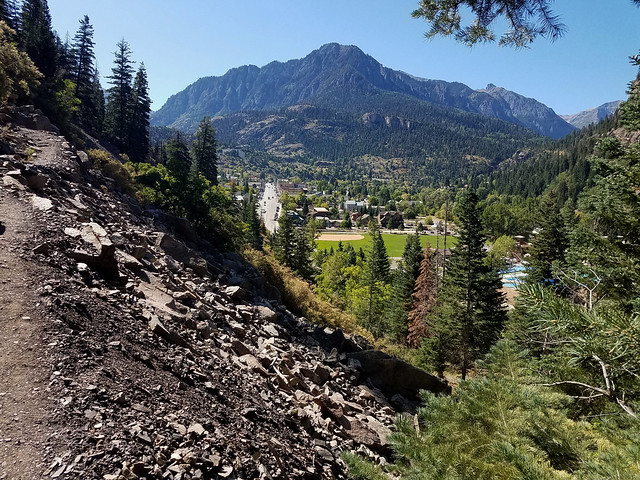 The trail begins with a steep gain in elevation

Once up on the ridge we enjoyed nice views of the town below as we hiked. 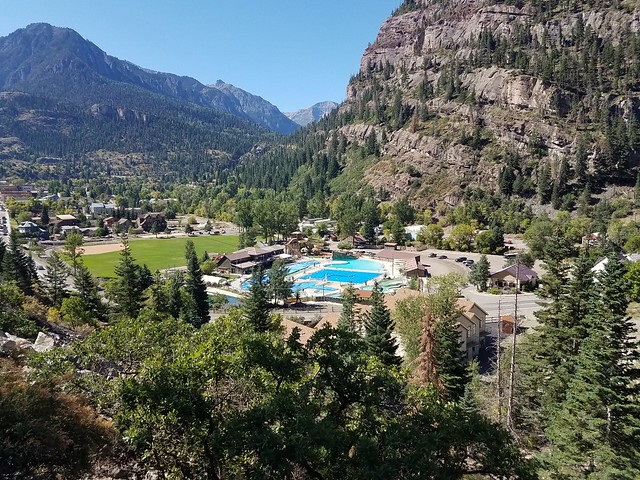 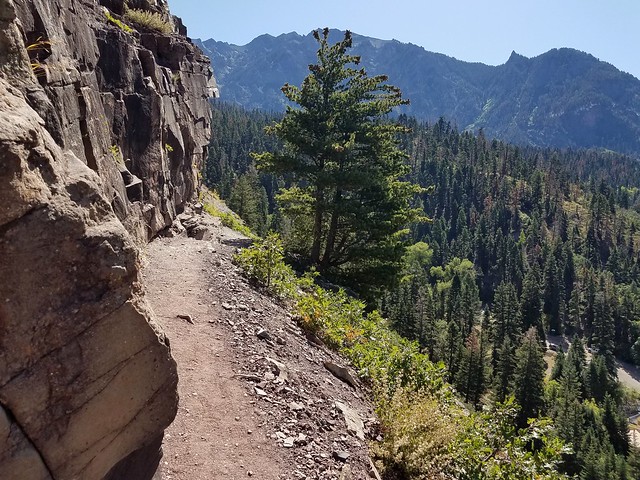 The narrowest part of the trial 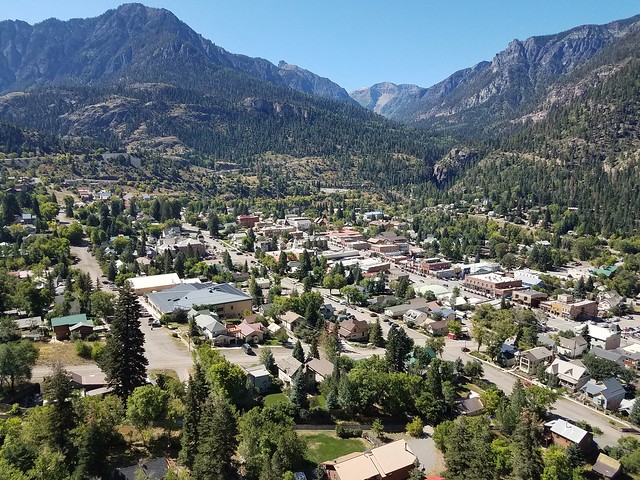 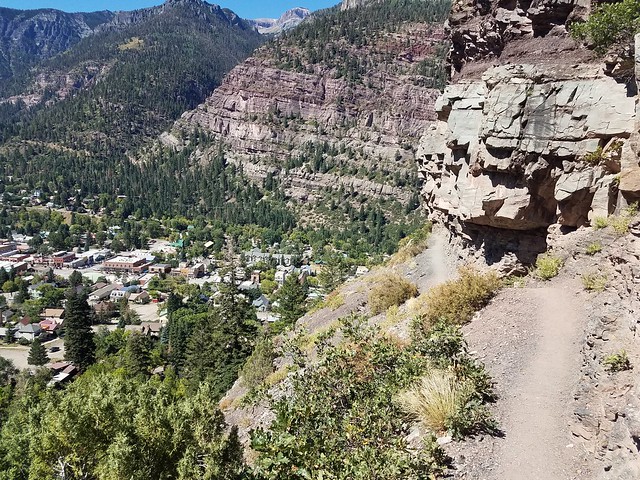 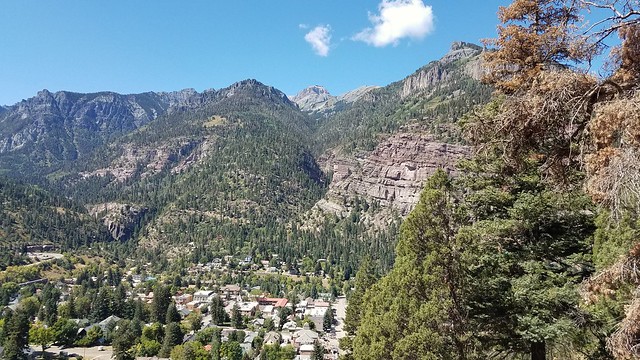 After a little over a mile we came to Cascade Falls and the Cascade Creek bridge. 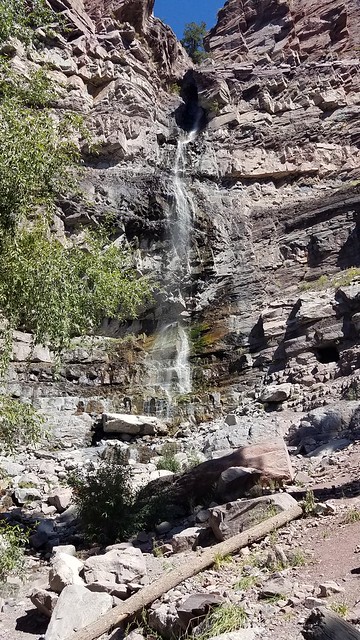 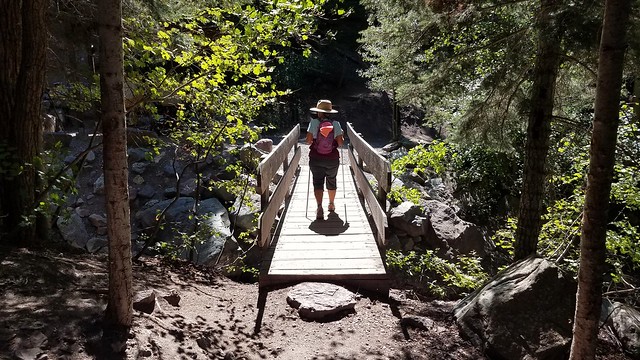 After a steep uphill climb and a short walk on Amphitheater Campground Road we hiked a short trail along Little Portland Creek to a nice area called the Baby Bathtubs. 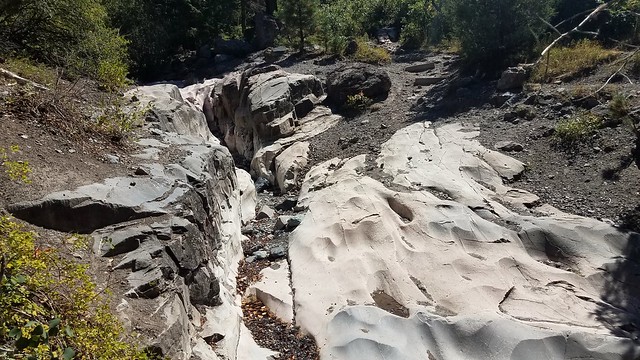 We followed the trail up through the woods  and onto Portland Mine Road.   The road goes uphill a short distance and the trail turns right into the old miners’ Potato Patch. (They really grew potatoes here.) 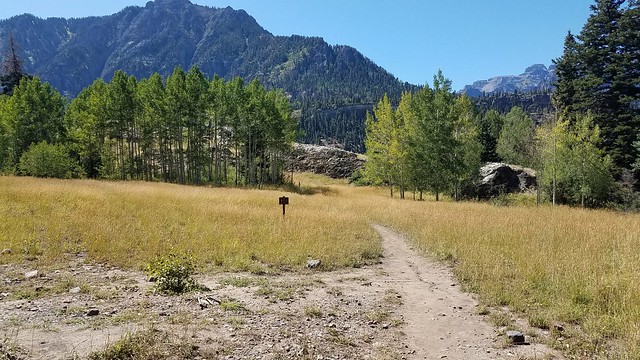 The trail went across the Patch to a rocky knoll that features great views.  This is the highest point (8,500′) on the trail. 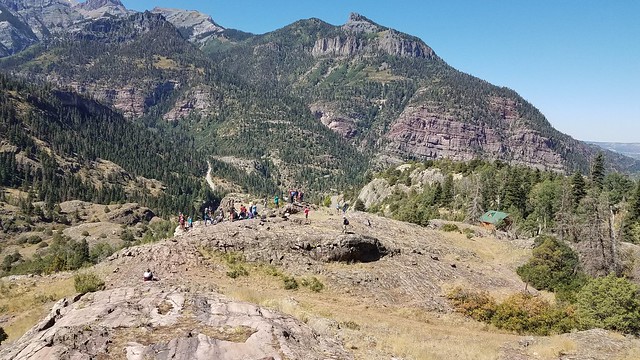 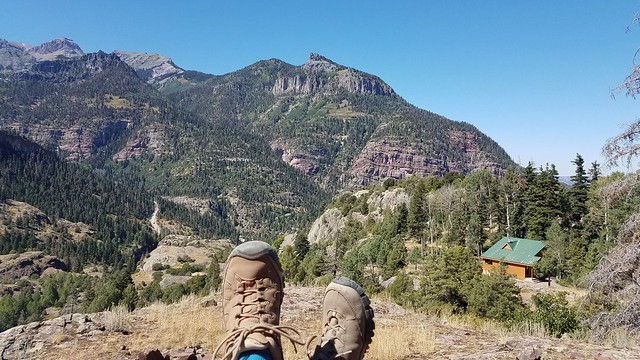 Climbing down from our lunch perch we crossed US 550 (carefully!) and followed one of the trail signs down a dirt access road for a half mile before turning back on to a trail. 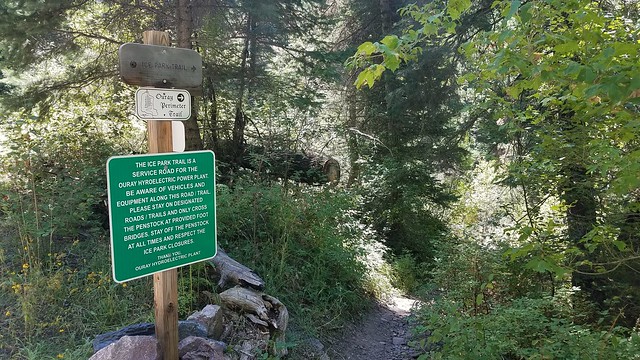 A short distance down the trail a bridge crosses the Uncompahgre River (un-COME-pah-GRAY). 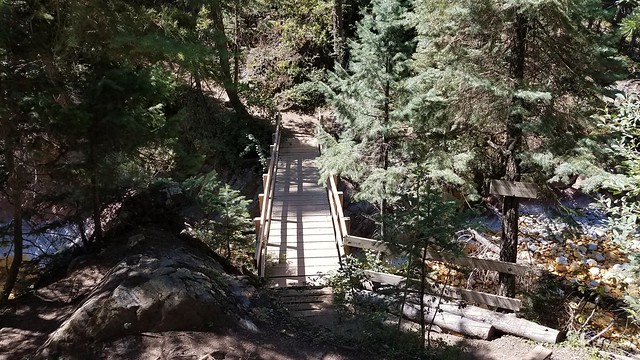 Uncompahgre is a Ute Indian word that means “dirty water” or “angry water” or “red lake,” because mountain minerals color the water. 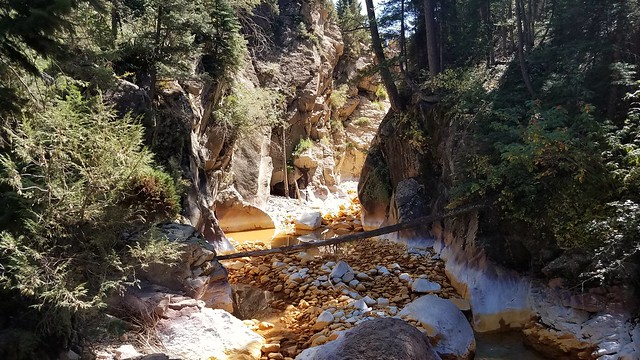 After crossing the bridge we continued uphill to a large water pipeline and a metal stile. 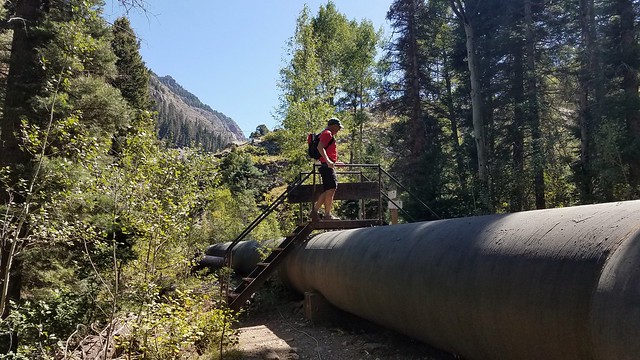 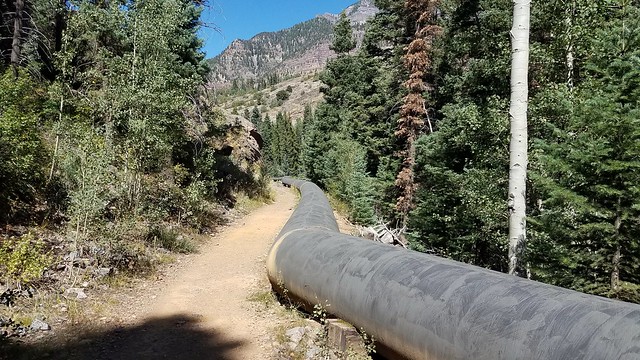 Moving down the trail we passed a wall of rock on the other side of the river.  This area is known as the Ouray Ice Park.  In the winter, sprinklers pour water from the pipeline, allowing giant icicles to form down the gorge’s walls, attracting ice climbers from all over the world. 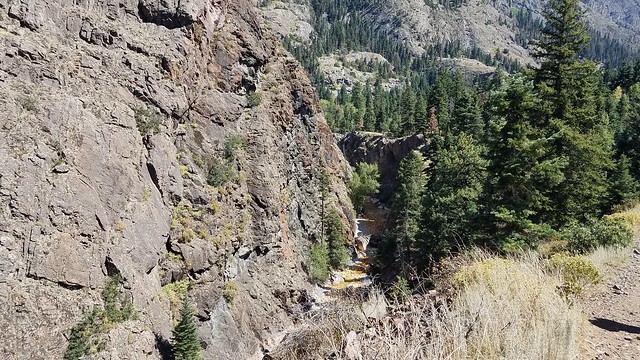 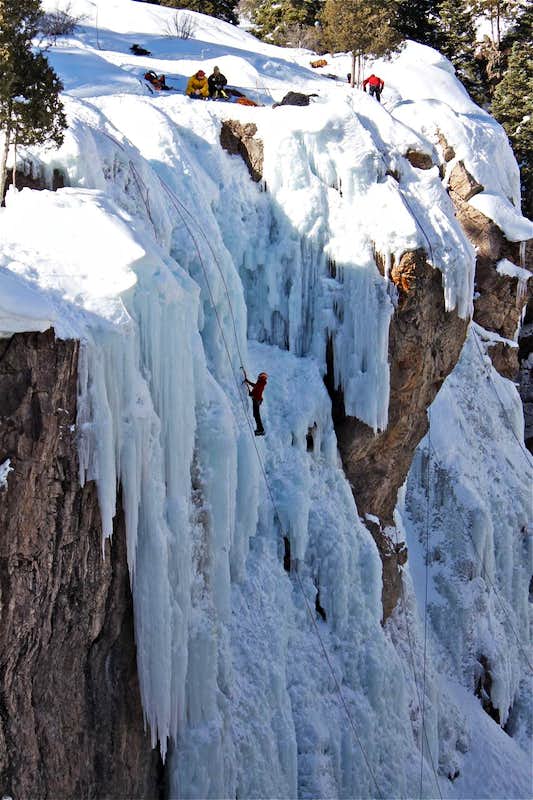 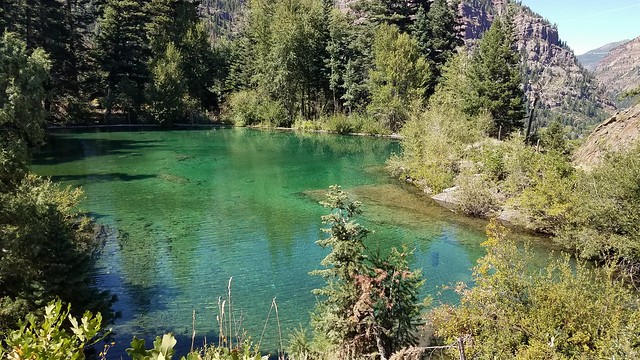 Past the reservoir the trail veered slightly off the road and soon crossed CR 361.  It then heads to the Box Cañon high bridge  over Cañon Creek’s spectacular gorge, 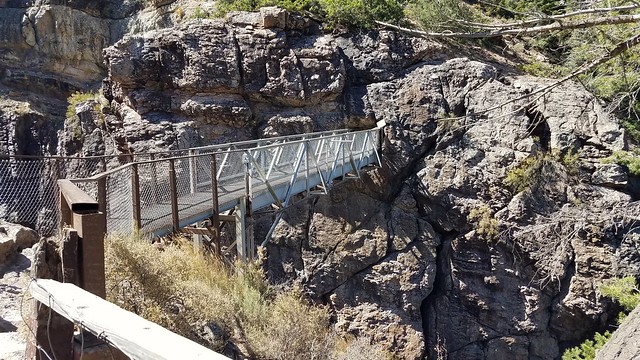 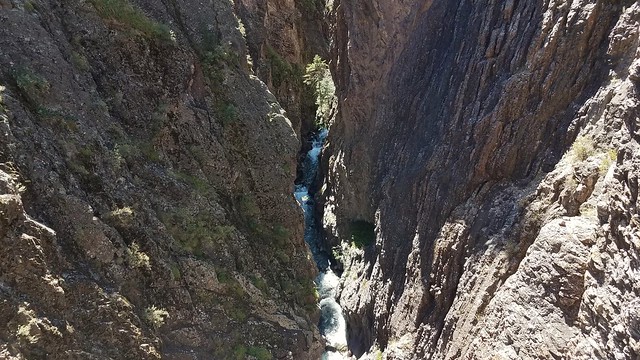 View of Cañon Creek from the bridge

Past the bridge, the trail passes through a low-hanging tunnel that was built for a water pipeline project in the early 20th century before it was abandoned in the 1950s. 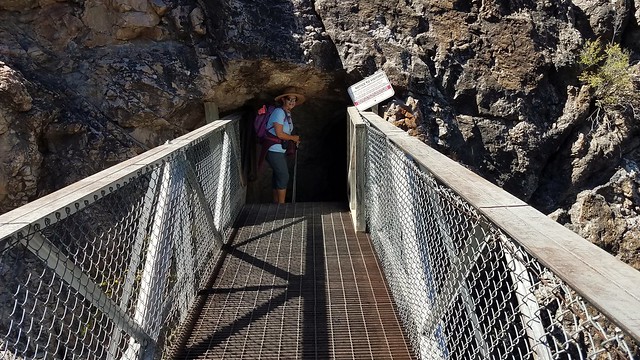 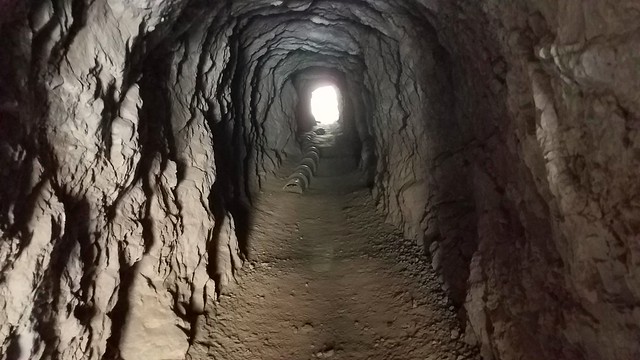 Once through the tunnel the trail goes down a steep set of steps with a fence on the edge and a cable along the wall to help hikers. 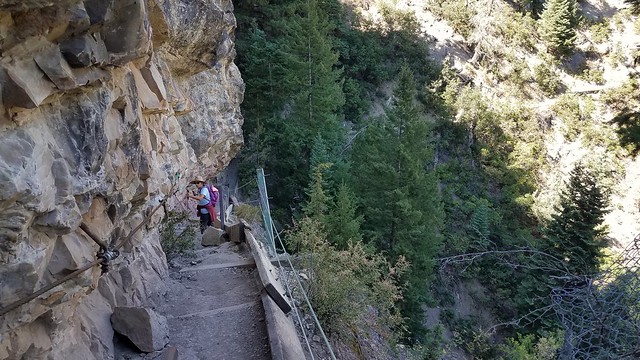 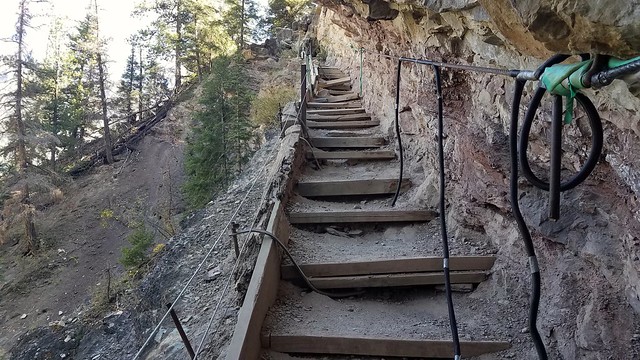 The remainder of the circuit consists of road walking, beginning with a downhill stroll on the unpaved Pinecrest Drive.  After crossing Oak Creek you take a left on Oak Street, a residential drive that parallels the Uncompahgre River as it heads northward.  At the town maintenance garage take a right and cross the pedestrian bridge over the river and follow the path back to the Visitor’s Center and parking lot where the hike began. 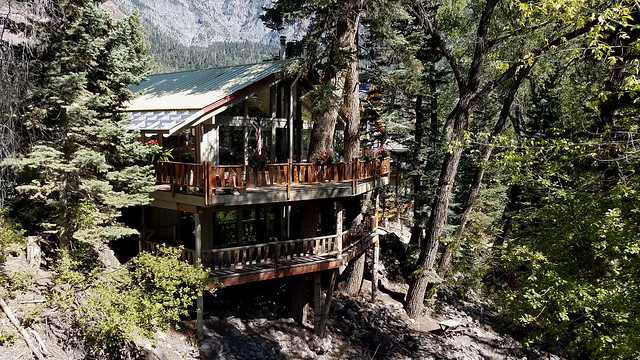 The 6.5 mile Perimeter Trail is a great way to experience a variety of terrain while enjoying great views of the town of Ouray.  If you are a hiker, this is a must-do experience while visiting Ouray.

Next up for us is a visit to the towns of Gunnison and Crested Butte.  More on that later . . .