Posted on September 19, 2019 by placestheygo

One day during our visit here we drove south on US 550 through the little town of Ouray and up and over the San Juan Mountains for 23 miles to the town of Silverton.  One of the main objectives of this trip was to drive the Million Dollar Highway, which is what the section of US 550 from Ouray to Silverton is frequently called.

The road was originally built as a toll way in 1883 and operated as such until the 1920s, when it was rebuilt.  No one is certain of why this highway has its name.  One explanation is that an early traveler was so overcome by vertigo on the steep and winding stretch of road that he insisted he would never travel it again, even if he was paid a million dollars.

Another explanation is that the construction of the road in the 1930’s cost one million dollars per mile, or that the land cost a total of a million.  Also, some people think that the name has to do with the fact that builders used gravel from the nearby silver and gold mines and that the dirt was so rich in ore, it was worth a million.  Who knows what the reason, we just know that the views are worth a million of something! 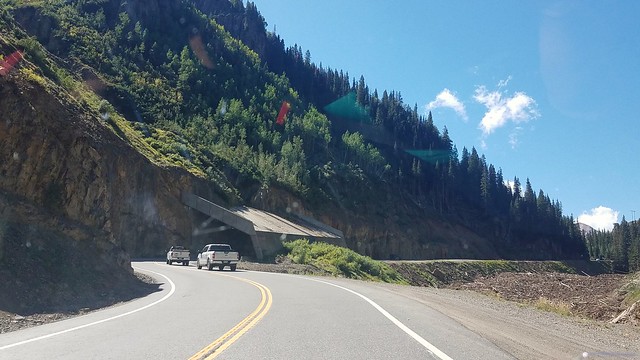 A snow shed over the highway

This journey takes you winding and weaving through the mountains, clinging to tight curves with breath-taking views. It climbs up three very steep high mountain passes: Red Mountain Pass (at an elevation of over 11,000 feet), Molas Pass and Coal Bank Pass. 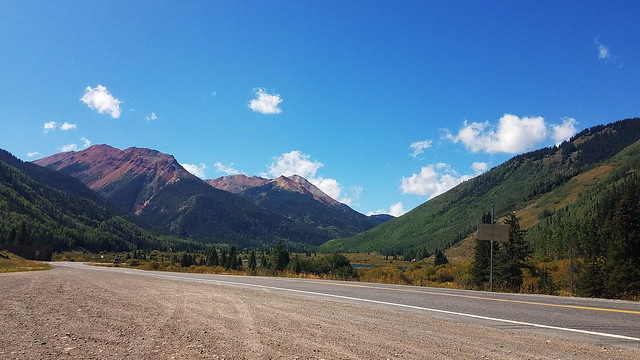 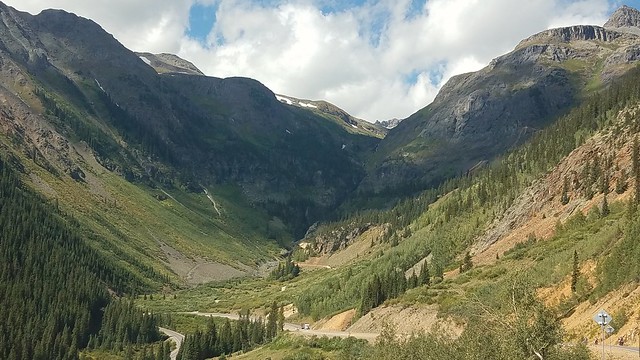 Looking south from a high pass 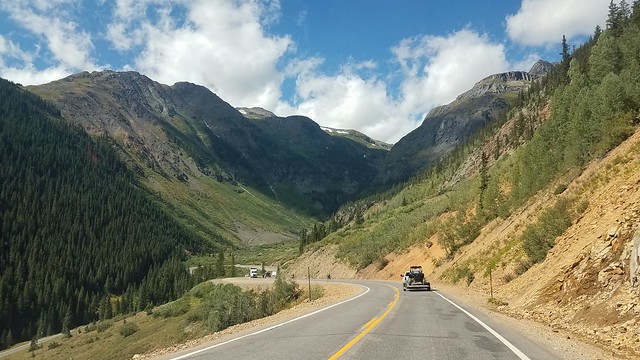 Another view to the south

After crossing over the mountains we arrived at the little town of Silverton (pop. 630).  Silverton was founded in 1874 to support the numerous mining operations active in the area.  Silverton no longer has active mining, but subsists by tourism, maintenance of US 550 , mine pollution remediation, and retirees.  Most or all of the town is now included in a federally designated National Historic Landmark District called the Silverton Historic District. 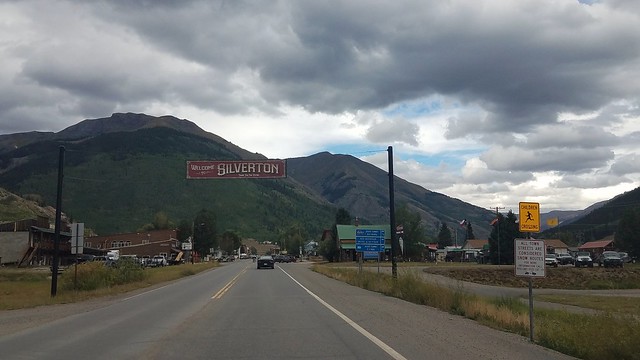 Silverton is the northern terminus of the Durango & Silverton Narrow Gauge Railroad, a three foot narrow-gauge heritage railroad that operates 45.2 miles of track and offers tourists a tour through the mountains between Durango and Silverton. 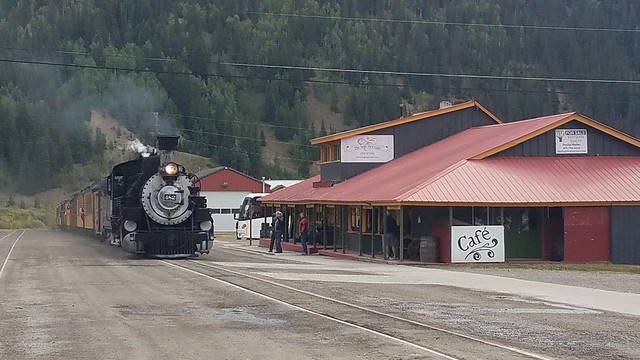 The train pulling into the station

We by-passed the train ride and headed north out of town on County Road 2 (Greene Street) to explore a section of the Alpine Loop, a series of unpaved roads winding through the mountains between Ouray and Silverton past a number of abandoned mines and ghost towns.  While the meadows and tundra are accessible to ordinary passenger vehicles, a high-clearance 4-wheel drive vehicle is required to travel the entire route. 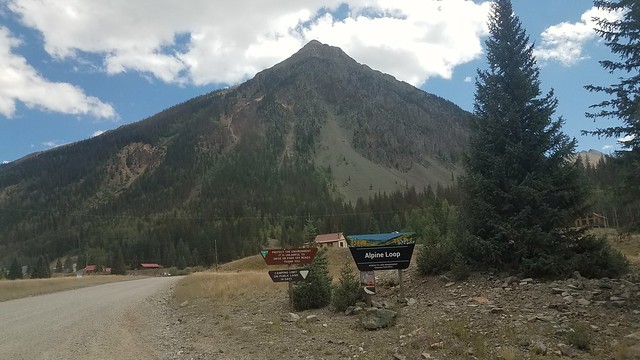 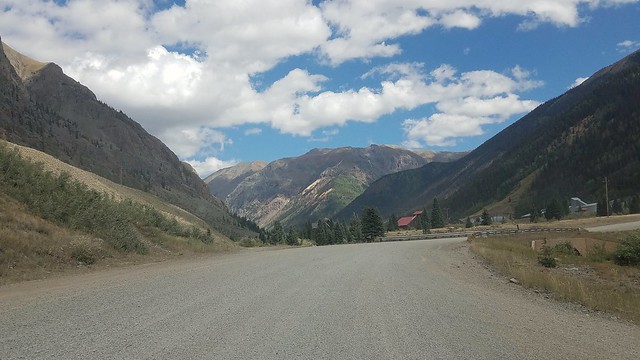 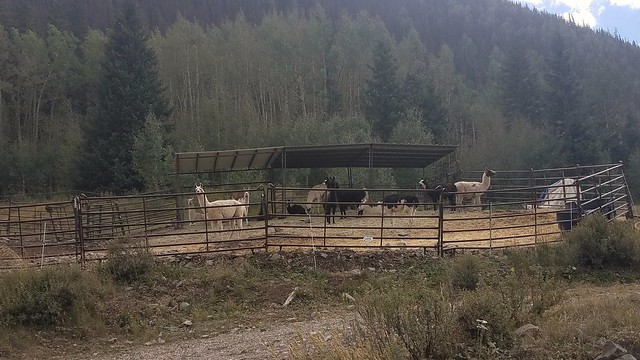 A herd of vicious Llamas guard the roadway 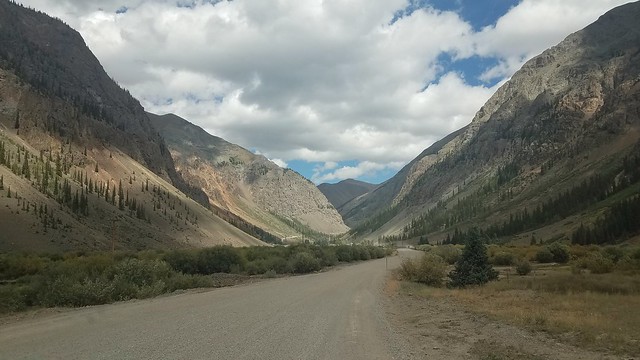 The loop is quite scenic 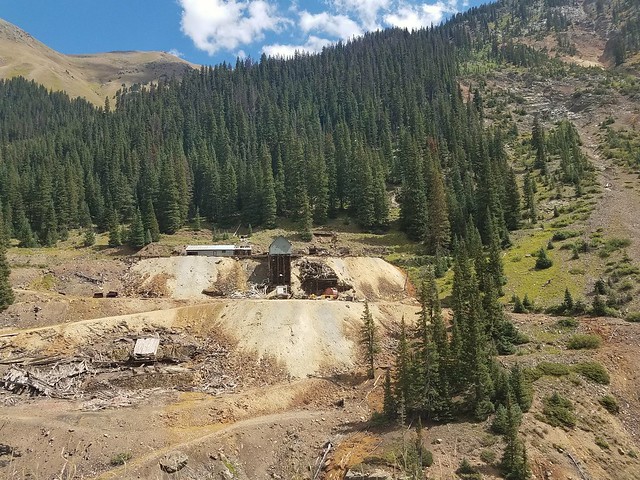 One of many abandoned mines in the area

As the road gained in elevation we passed a number of still unmelted banks of snow. 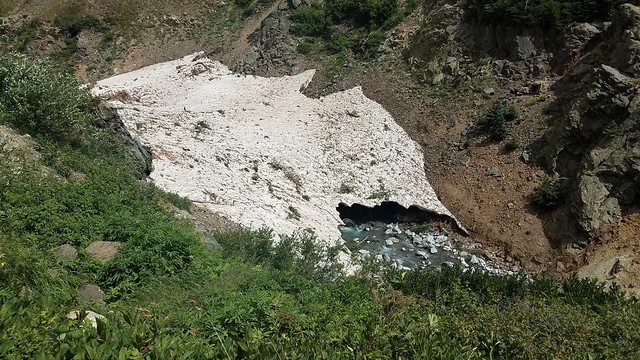 Soon we came to an area where a huge avalanche during the past winter had blocked the road.  Apparently this section of the road was only opened for travel in late June. 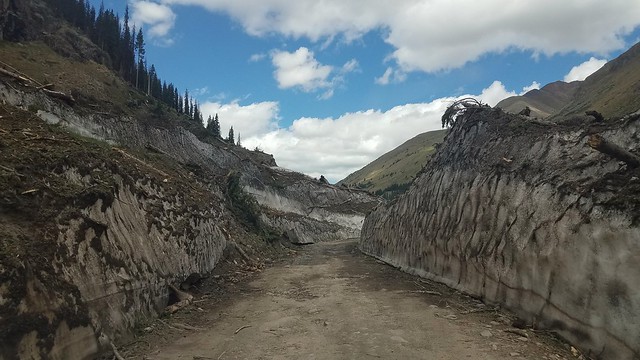 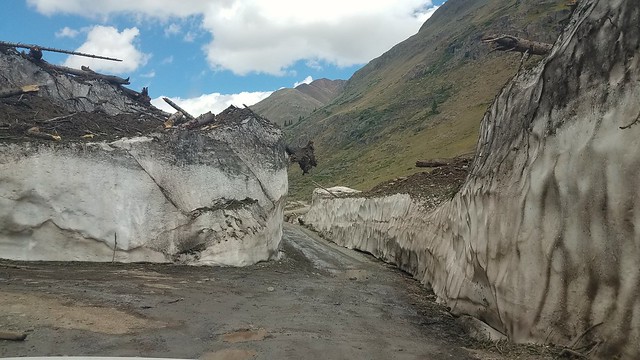 The road narrowed and became rougher as we drove north.  After about 12 miles we came to our destination, the ghost town of Animas Forks.  At over 11,000 feet, Animas Forks is one of the highest mining camps in the Western US. 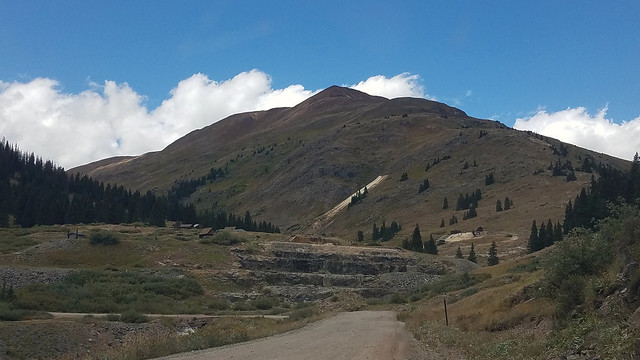 Buildings of Animas Forks visible along the tree line 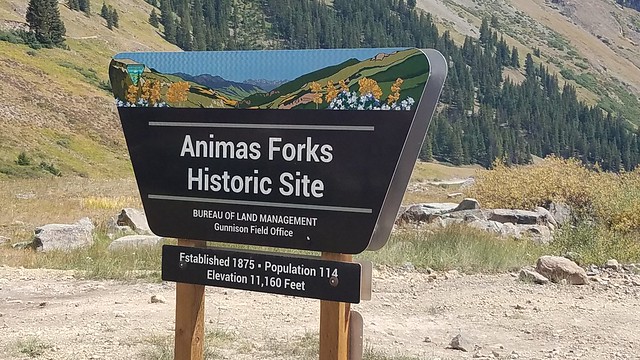 The town’s first log cabin was built in 1873 and by 1876 the community had become a bustling mining community.  At that time the town contained 30 cabins, a hotel, a general store, a saloon, and a post office.  By 1883 450 people lived in Animas Forks and in 1882 a newspaper, the Animas Forks Pioneer, began publication and lasted until October 1886. Every fall most of the residents of Animas Forks migrated to the warmer town of Silverton.  In 1884 a 23 day blizzard inundated the town with 25 feet of snow and the residents had to dig tunnels to get from building to building. 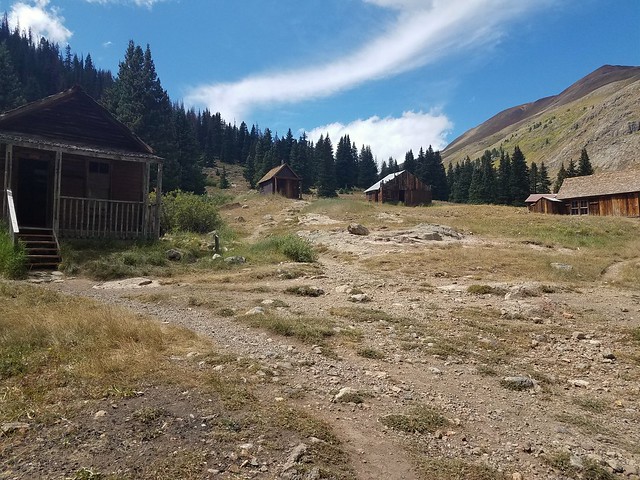 When mining profits began to decline, investment in Animas Forks was no longer justified.  The Gold Prince Mill closed in 1910 and in 1917 most of the mill’s major parts were removed for a new facility in another town.  The mill’s dismantling signaled the beginning of the end for Animas Forks.  The town was a ghost town by the 1920s. 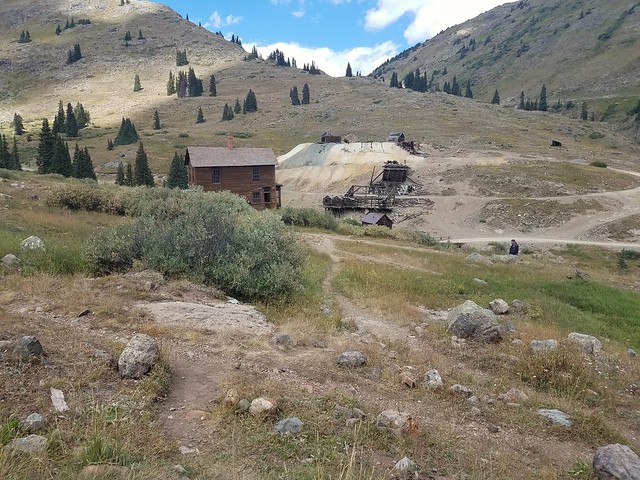 Below is a photo of the Gustavson House, built in 1906.  A couple from Scandinavia lived here year round with their four children for four years. 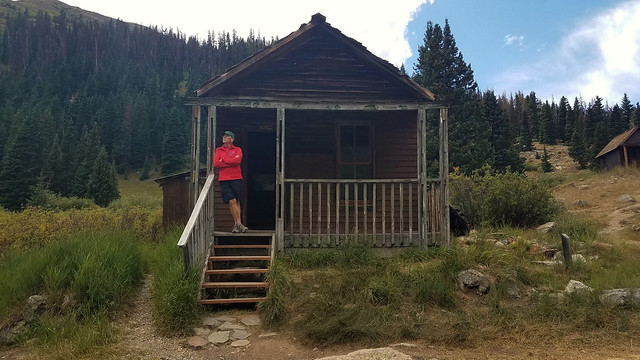 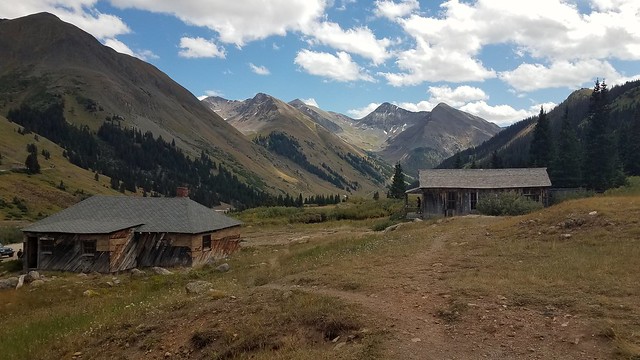 The rehabilitated 1879 William Duncan House (below) belonged to one of the first miners to live in Animas Forks year round. 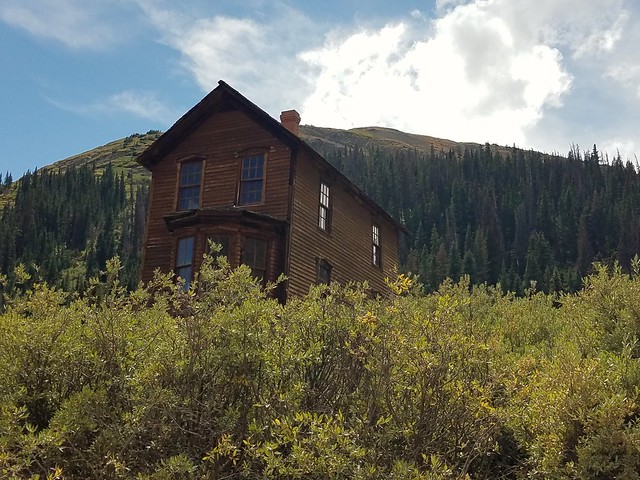 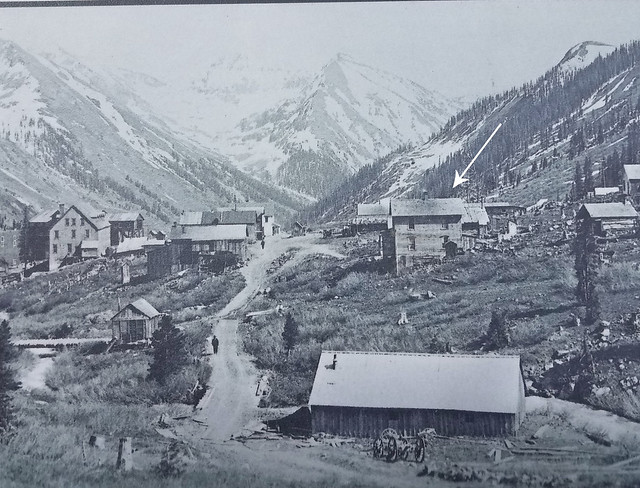 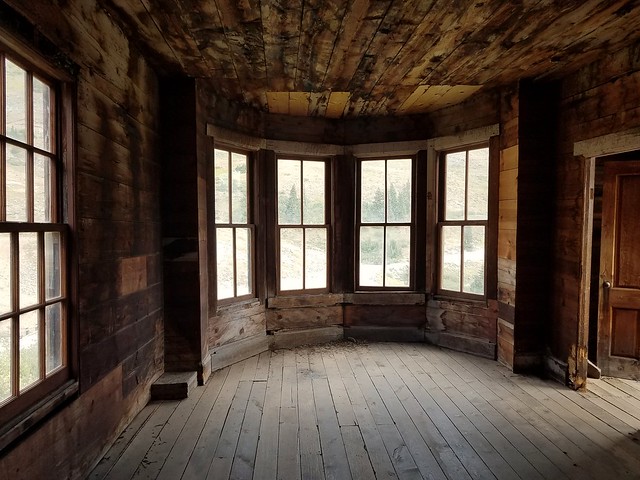 After exploring the ghost town buildings we headed back down the loop road, going back through the avalanche area. 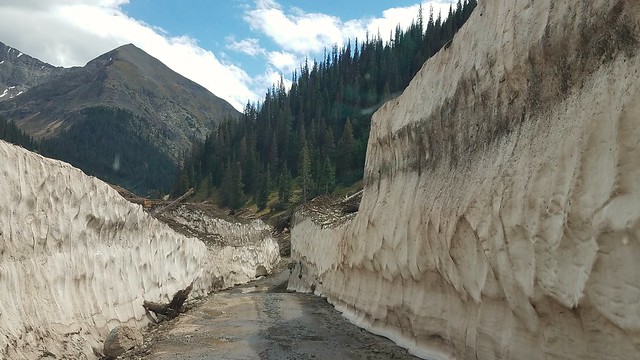 Returning back over the Million Dollar Highway we had some great views during the descent back down into Ouray. 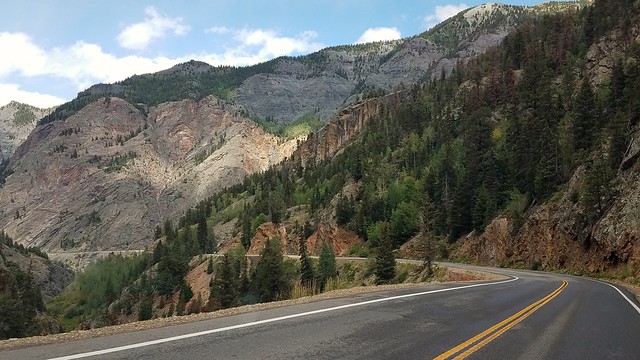 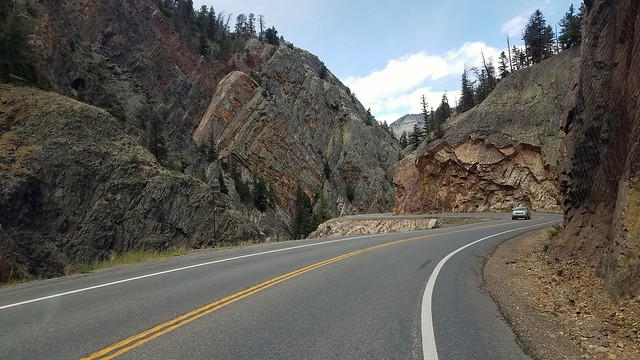 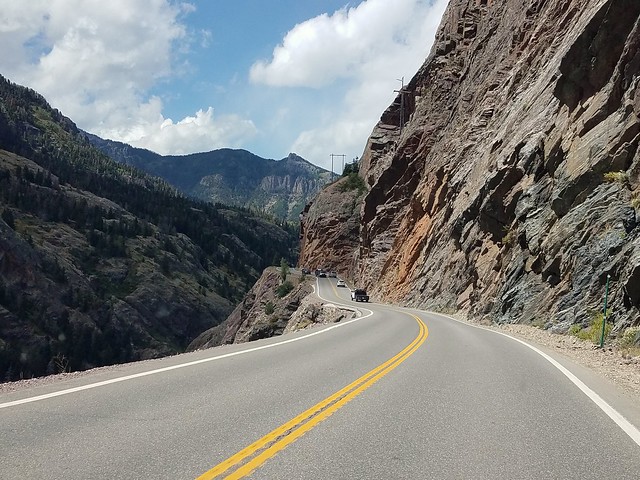 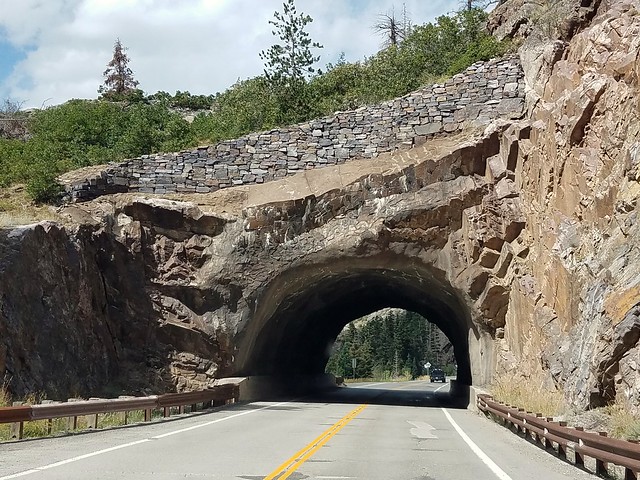 Next up for us is a hike on the Perimeter Trail, a loop trail going high around Ouray.  More on that later . . .

21 Responses to Jeep Roads and the Million Dollar Highway