A Visit to Telluride, CO

Posted on September 15, 2019 by placestheygo

After a three night visit to Cedar City, UT we headed north on I-15 then east on I-70.  Heading east the highway climbs up into the mountains, cresting at Clear Creek Summit with an elevation of 7,180 feet.  It then descends into the Sevier Valley and goes around the cities of Richfield and Salina.  After leaving exit 56 in Salina, I-70 continues for 104 miles  to the first Green River exit 160.  Though there are a number of exits in between the two cities, this is the longest distance in the Interstate Highway System with no motorist services directly along the highway.  About 30 miles west of Green River the highway descends through a series of beautiful canyons that are part of the San Rafael Swell. 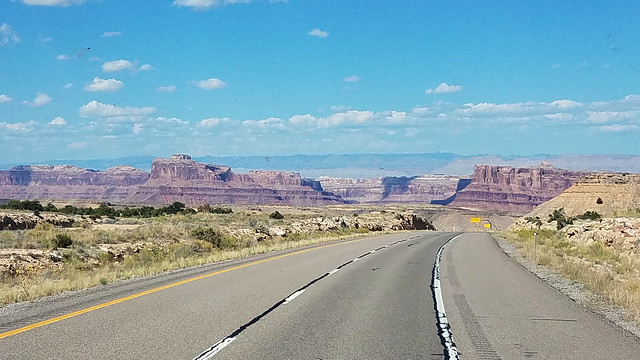 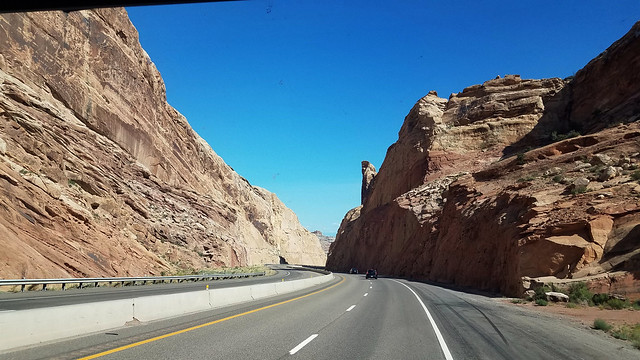 Going through the Swell

Once down through the Swell the landscape flattens out all the way to Green River.  We stopped there for the night at Shady Acres RV Park, a decent park for an overnight stay, before continuing into Colorado. 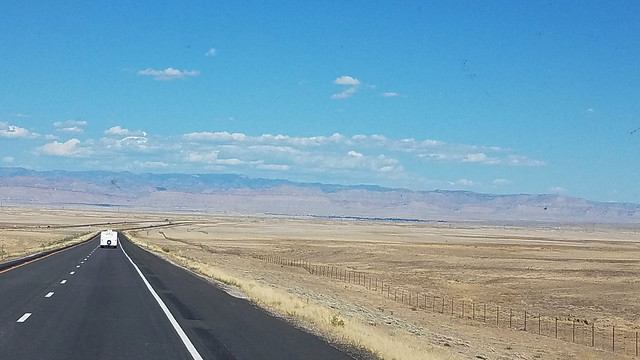 After our overnight in Green River we continued on I-70 to Grand Junction, CO where we turned south on US 50.  Driving through Grand Junction, Delta, and Montrose we arrived at Ridgway State Park, where we had a reservation for five nights. 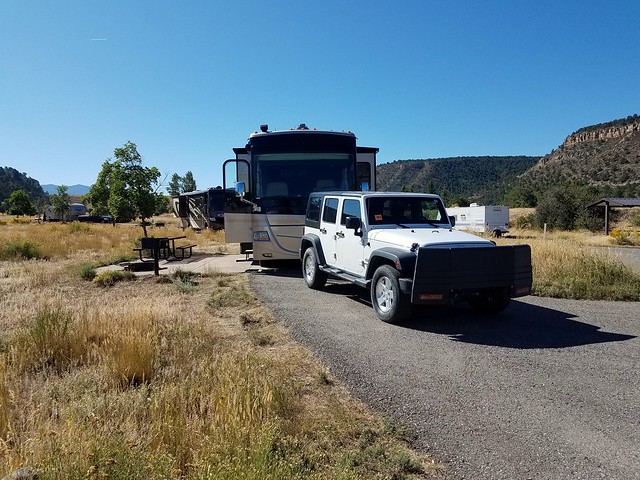 Ridgway is a nice state park right along the Ridgway Reservoir and the Uncompahgre River.  The park is in three sections, with two located along the reservoir and one north of the dam along the river. 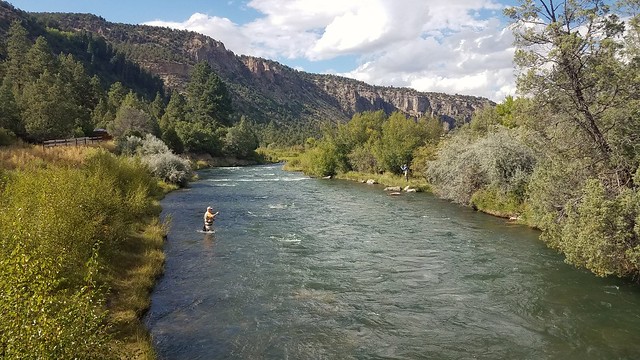 Fly Fishing along the Uncompahgre River near our site 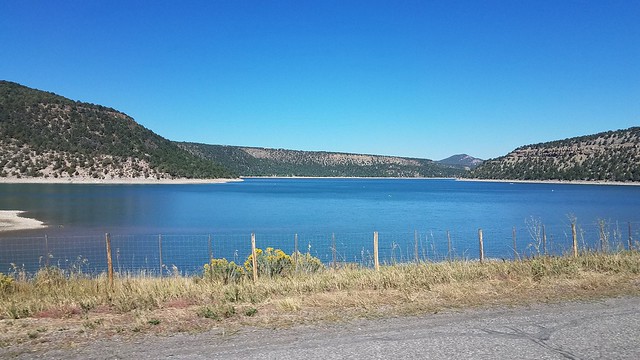 Driving south between the separate units of the state park the Sneffels Range of the San Juan Mountains comes into view.   Many of those peaks are over 13,000 feet with the highest being Mt. Sneffels at 14,150 feet. 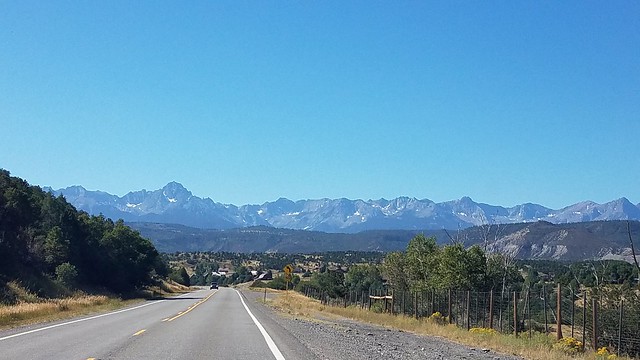 Our first activity in this area was a visit to the ski resort town of Telluride, about 40 miles southeast of Ridgway.  The town is a former silver mining camp on the San Miguel River in the western San Juan Mountains. The first gold mining claim was made in the mountains above Telluride in 1875, and early settlement of what is now Telluride followed.   The town sits in a box canyon at an elevation of 8,750 feet.  A recommended way to visit Telluride is to park in the nearby small, upscale community of Mountain Village almost a thousand feet above Telluride and ride the free gondola system into the town.  We followed that advice and parked in the free parking garage in Mountain Village.  There we boarded a gondola for a 12 minute fairly level ride into the center of Mountain Village. 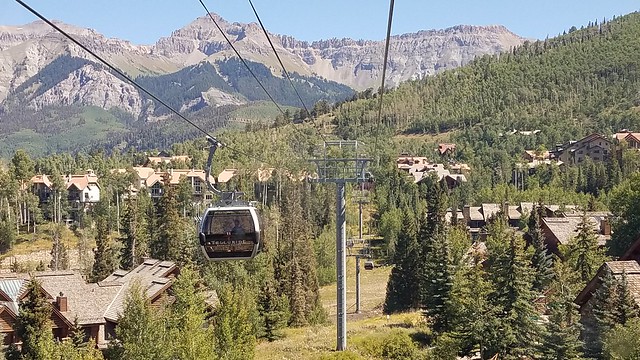 In the main section of Mountain Village we boarded another gondola that took us up over the San Sophia Mountain ( if hiking or biking the mountain you get off here), then steeply down into Telluride. 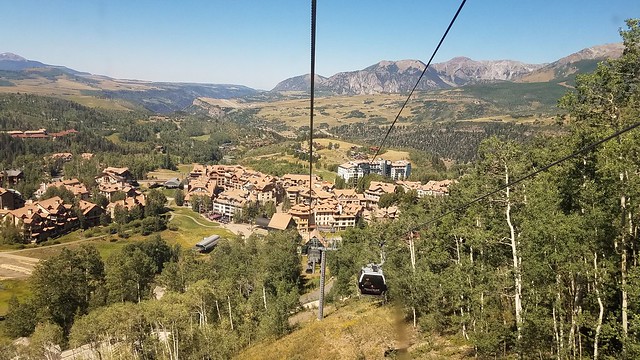 Looking back down into Mountain Village 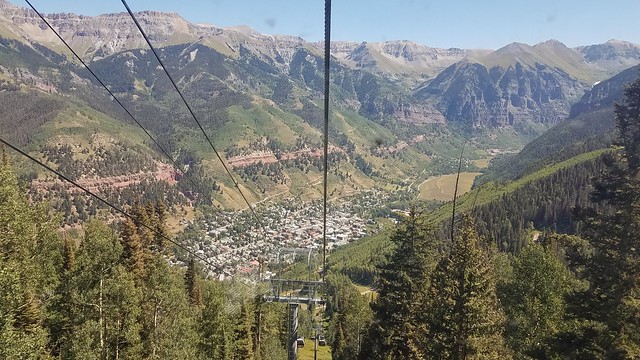 Crossing over the peak and looking down into Telluride 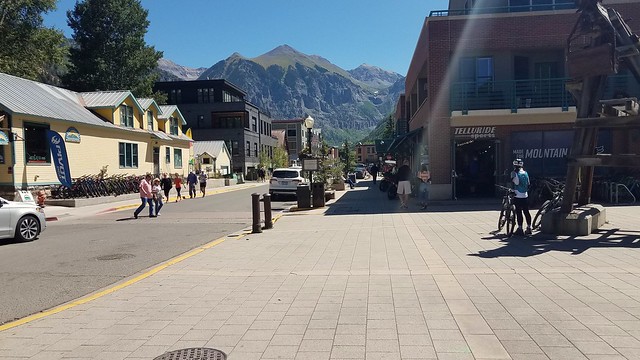 Exiting the gondola in Telluride 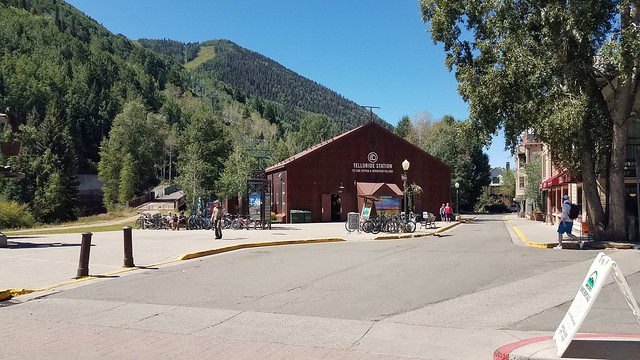 Looking back at the gondola entrance

Telluride is a neat little upscale ski town with a population of 2,325.  The main street is filled with shops and restaurants. 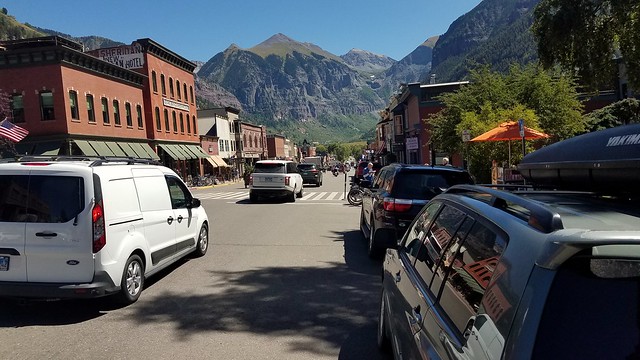 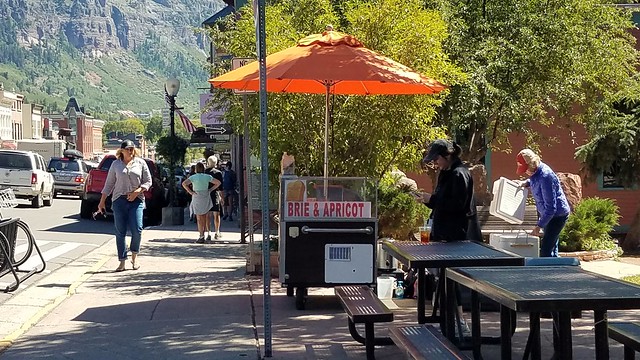 No hot dog vendors in this town!

After exploring the main area of town we boarded the gondola and enjoyed the cool ride up and over the mountain, stopping in the center of Mountain Village to enjoy a few moments at one of those chain coffee shops out of Seattle.  Pam had read in Ingrid’s blog (Live Laugh RV) about a Jeep road called the Last Dollar Road that went 18 miles up and over the mountains between Telluride and Ridgway.  We asked about it at the visitor center and found that it was open to high clearance vehicles.  It sounded like a fun drive so off we went.  To get to the Last Dollar Road we had to head into Telluride, giving us a spectacular view of the box canyon where the town is located. 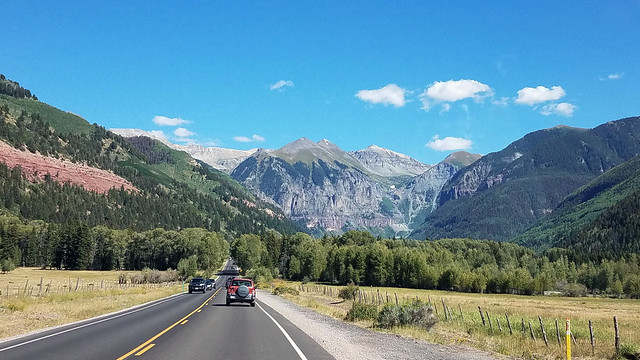 The view heading into Telluride

We turned north at the sign pointing at the Telluride airport and headed up the mountain.  Just beyond the airport the pavement ended and we continued on a well maintained dirt road that rose up into the mountains in a series of switchbacks. 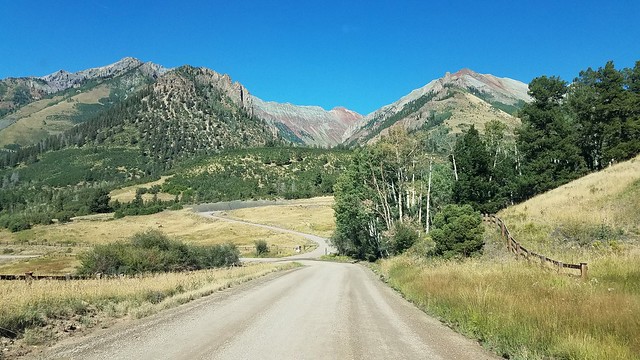 Nearing the summit the road became rough and narrowed to one lane.  We didn’t need four-wheel drive but high clearance was necessary in some areas. 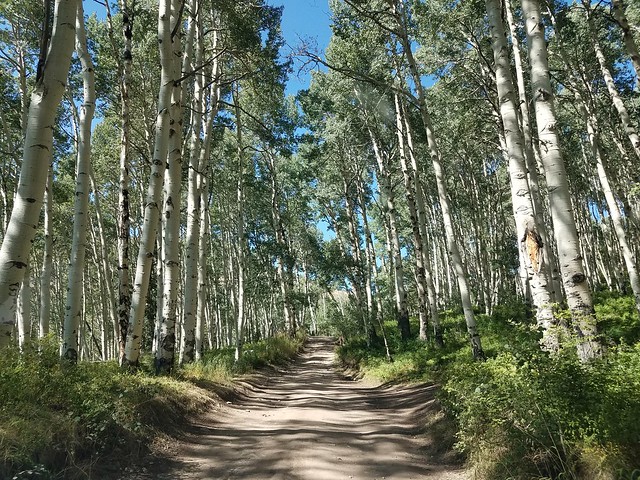 When the leaves change this “tunnel” should be quite stunning 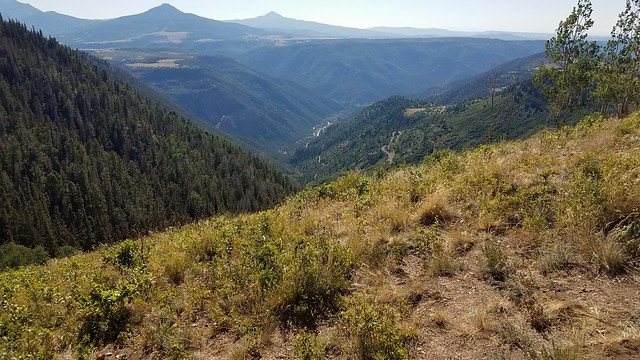 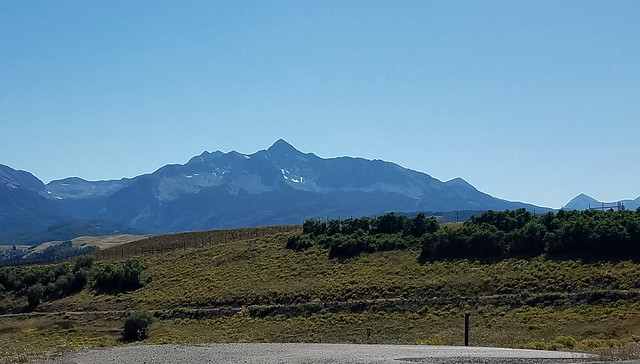 The peak may look familiar to those who enjoy a Coors beer, as it is the peak featured on the beer’s label. 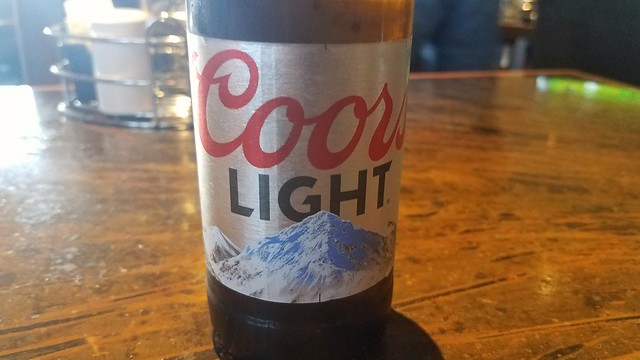 As we descended down the Last Dollar Road we were treated to a beautiful view of the mountains near a pass called the Dallas Divide. 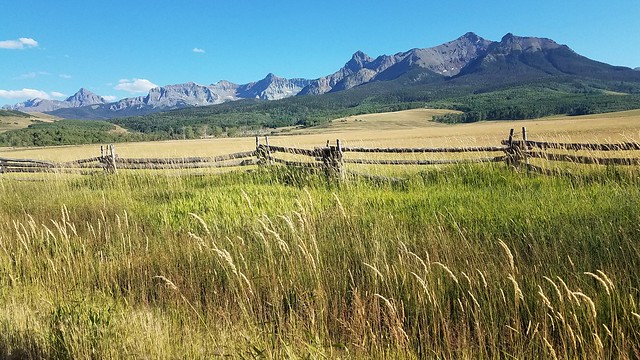 Next up for us is a drive up and over the mountains on the Million Dollar Highway.  More on that later . . .

41 Responses to A Visit to Telluride, CO