As with most towns (large and small) in the U.S., the 4th of July is a big deal in Boulder City, with family friendly activities all day.  The main event, again as with most towns, is a parade through the main section of town.  Since afternoon temperatures have been over a hundred degrees, the parade began at 9:00 AM, before the high heat arrived.  We walked up to a spot along 5th Street and got there just as the first group arrived. 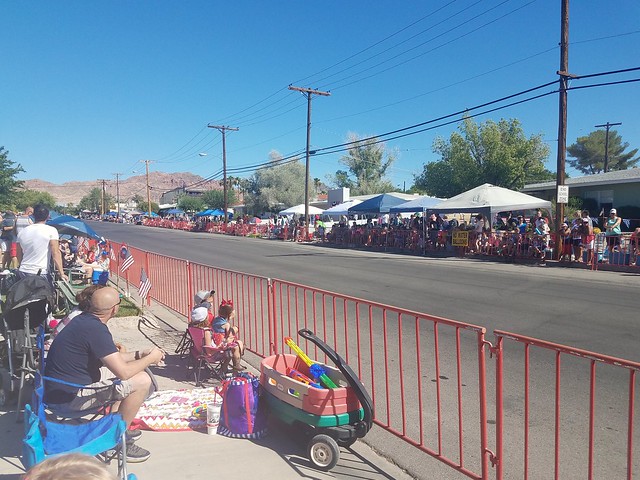 Waiting for the parade to begin

Once the first group passed us it was non-stop activity for almost two hours. 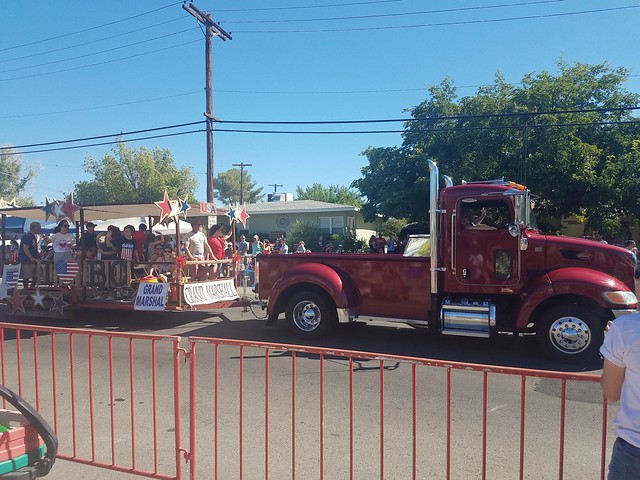 The Grand Marshall (we didn’t know who he/she was)

The Boulder City Democratic Club had a very large turnout. 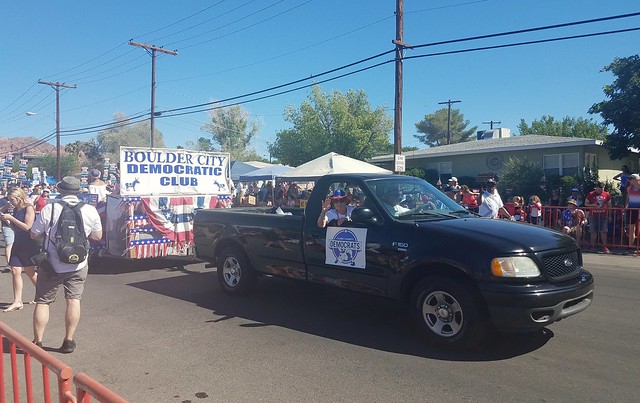 They even had a top presidential candidate, Sen. Cory Booker, marching with them! 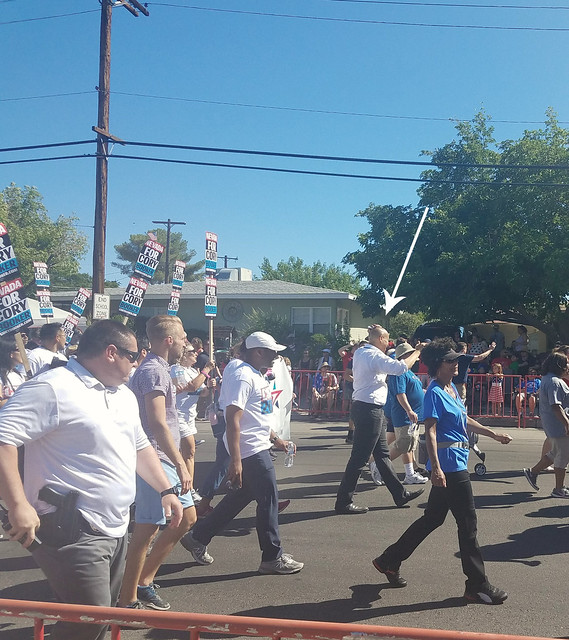 Sen. Booker turned and returned a wave at John.  When John gave him the “thumbs up” the senator responded right back at him.  Times sure have changed.  Who would have every believed a life-long Republican would be excited to get a response from a Democrat candidate!  Let’s hope many Republicans feel the same way next November! 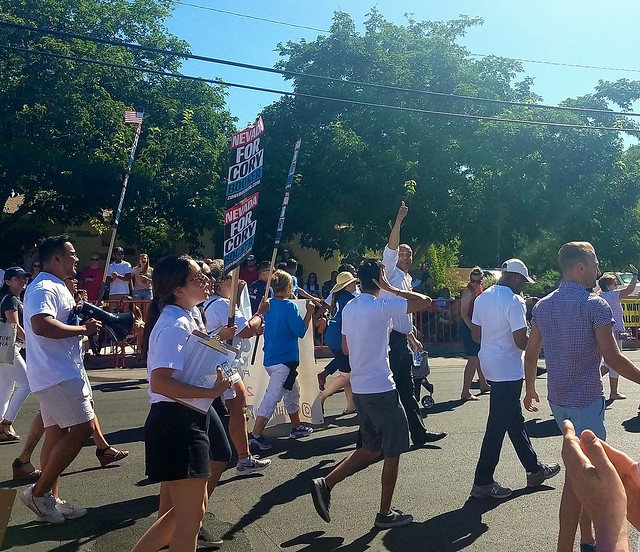 Thumbs up from Sen. Booker

The crowd marching with Sen. Booker was large, happy, and loud.  Right after him came another pretty large group, backers of Sen. Kamala Harris. 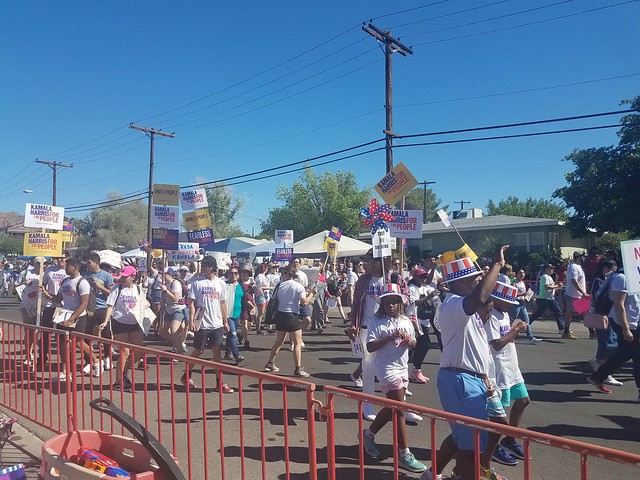 They were followed by a much smaller (and older) group supporting former VP Joe Biden.  Later in the parade a small group of Bernie Sanders supporters marched by.  We waited for a Republican group but didn’t see one. 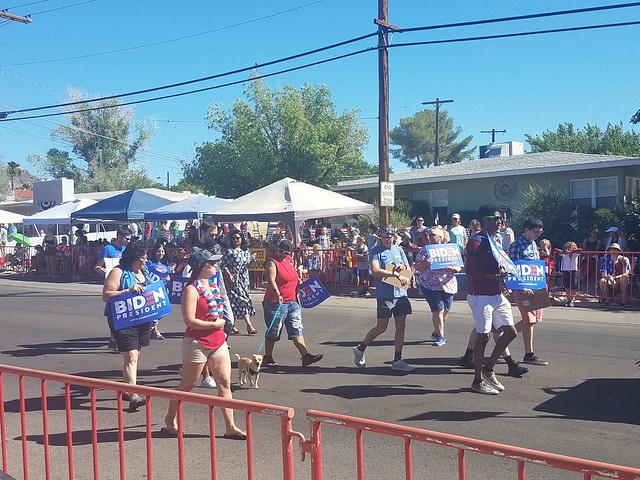 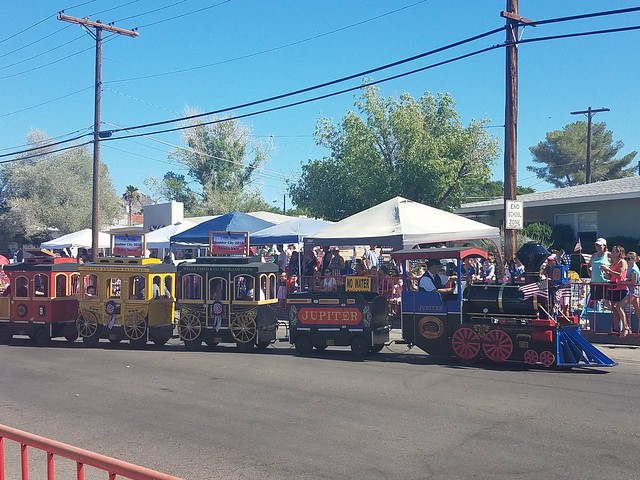 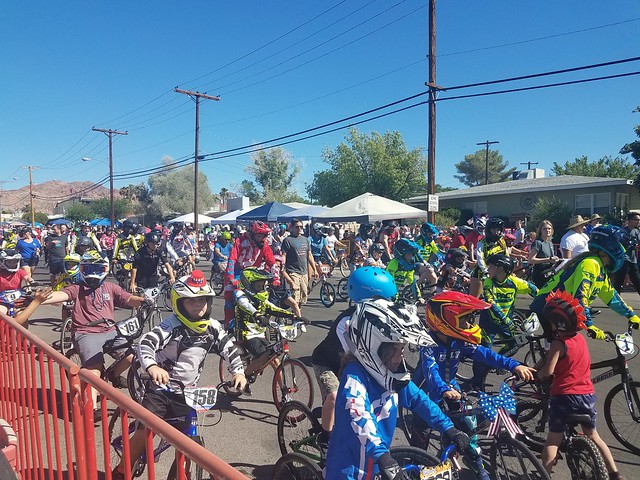 The town maintains a bicycle motocross track for this group 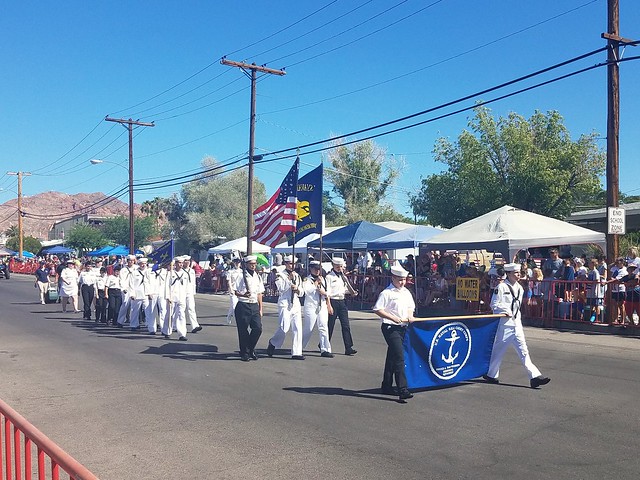 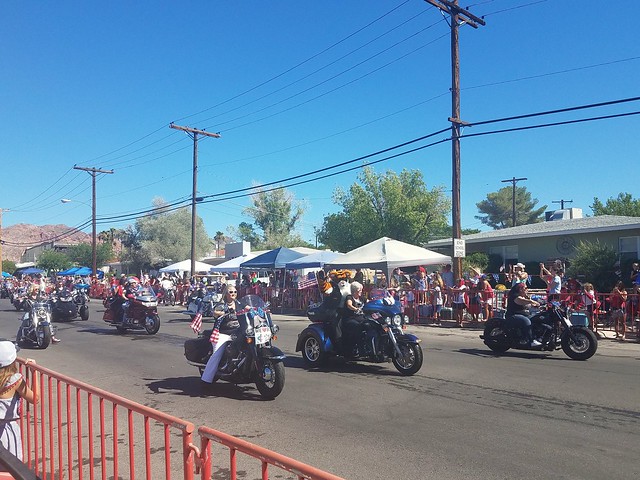 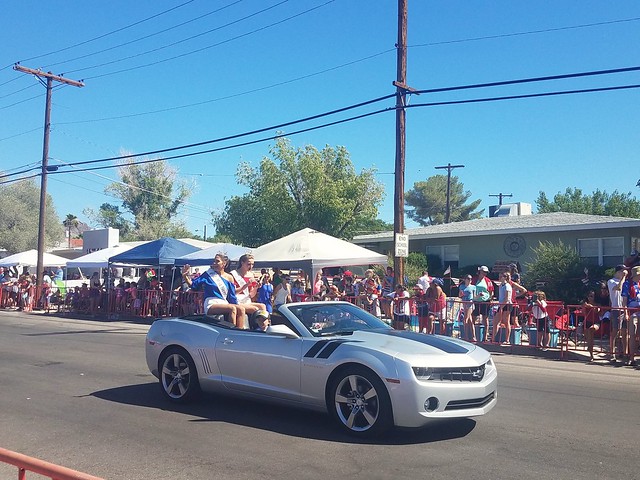 We had read something about “water areas” and “no water areas” along the parade route but really didn’t think much about it.  But about half way through the parade the crowd around us began to get excited, coolers full of water appeared, and large water guns were brought out.  It turns out that the highlight of the parade each year is a huge water fight between people in the parade and spectators, and we were standing right in the area designated as a battle zone! 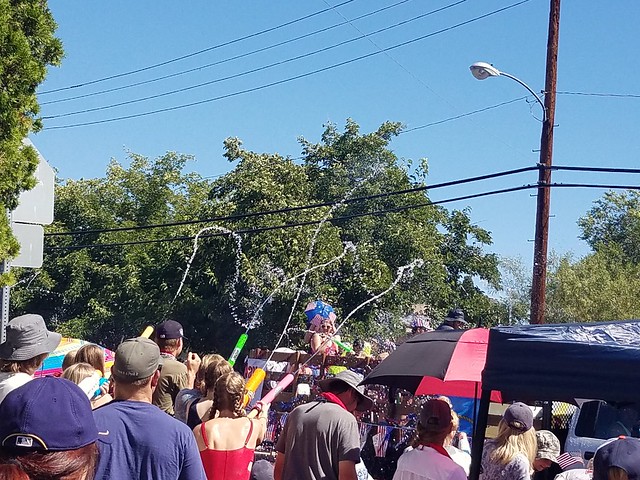 We didn’t mind getting a little wet, but these people meant business.  If you remained near the street you had to be ready to get drenched, so we moved back a bit down a side street and just watched the fun. 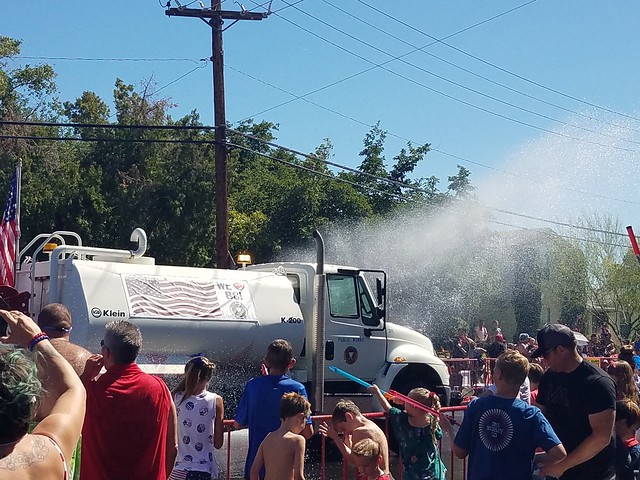 A city owned water truck had a large tank of water . . . 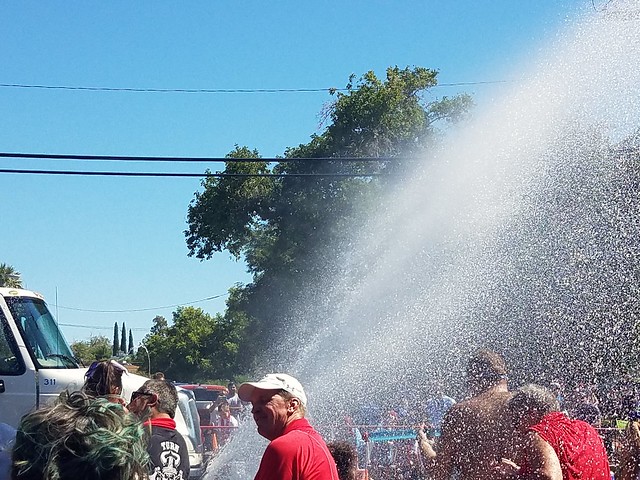 Pick-up trucks with plastic bed liners filled with water passed by.  A tank truck had large hoses extending from its rear that were used on the crowd.  But the spectators valiantly fought back with a variety of water weapons.  Everyone had a blast (literally) and within minutes they were all soaked and exhausted, but they thoroughly enjoyed themselves. 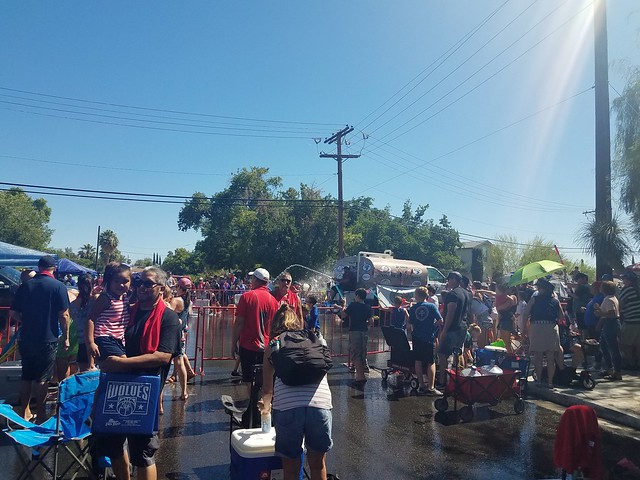 As we walked home we observed a river of rushing water going down the street.  It seems a bit strange to see this in a desert town, but we know it will all make its way back to the Colorado River. 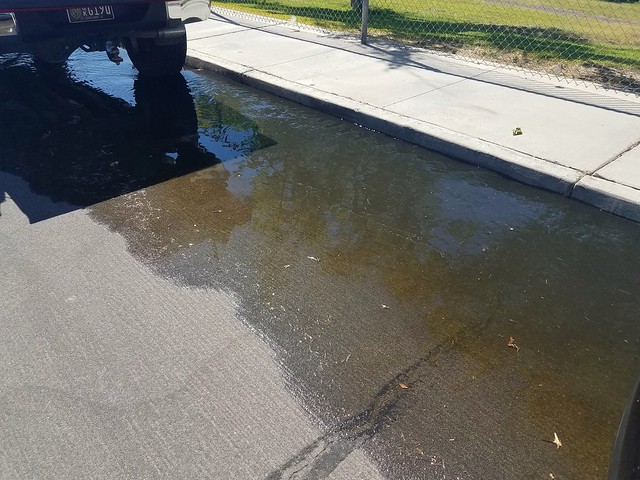 That night there was an impressive fireworks display at one of the nearby parks.  We enjoyed it from our back yard. 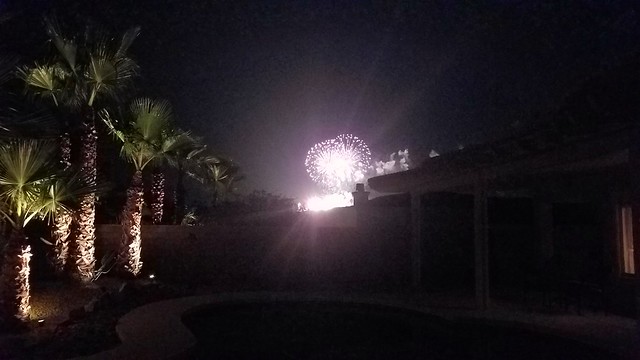 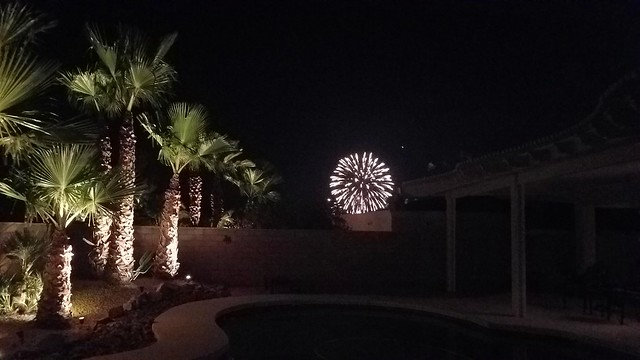 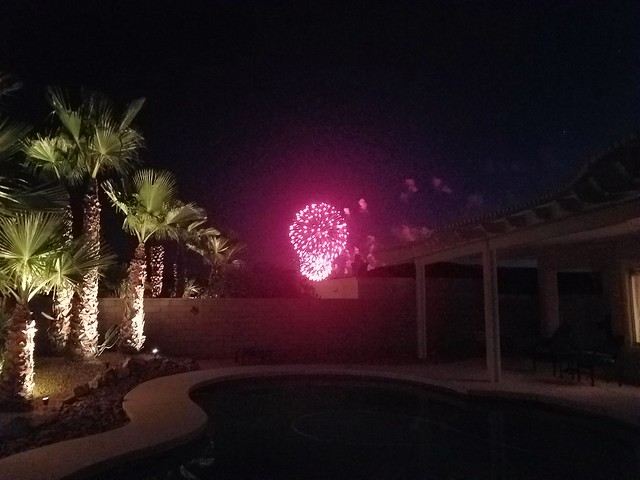 In July of 1776, founding father John Adams wrote about the Declaration of Independence to his wife, Abigail.

“I am apt to believe that it will be celebrated, by succeeding Generations, as the great anniversary Festival…It ought to be solemnized with Pomp and Parade, with Shews, Games, Sports, Guns, Bells, Bonfires and Illuminations from one End of this Continent to the other from this Time forward forever more.”

We’re certain he would have loved the celebration in Boulder City!