Hitting the Jackpot (Nevada) With Friends

We left Ketchum and headed south through Twin Falls, ID to Jackpot, NV.  There is nothing in Jackpot but Cactus Jack’s Casino, so we probably would not normally stay here.  But we found that good friends Steve and Mona Liza (Lowes Travels) would be here for a couple nights on their way north.  We haven’t seen them in a long time so we altered our route to fix that. 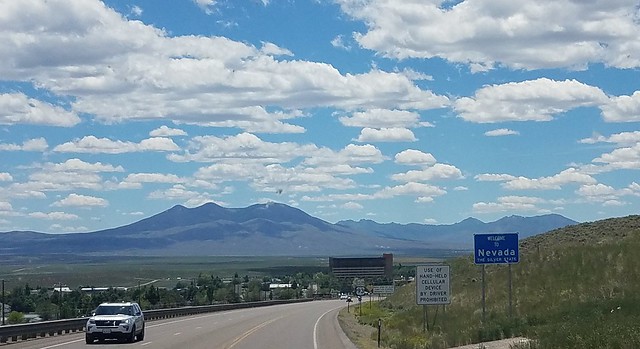 The state line just north of the casino

As we pulled into the RV park located behind the casino we saw Steve waving from behind their motorhome.  Seems they had just arrived and had just finished setting up.  Steve had checked in the office and found we were assigned to the site next to them, so we were able to quickly get settled. 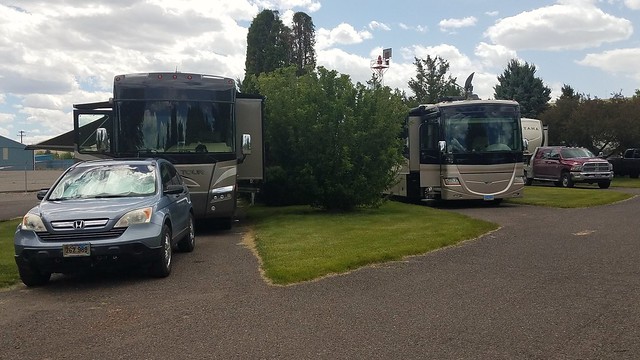 After a couple of hours catching up during a happy hour at their site, we headed over to the casino hotel to find a good restaurant.  We quickly settled on 36 Steak and Seafood, a small, upscale eatery. 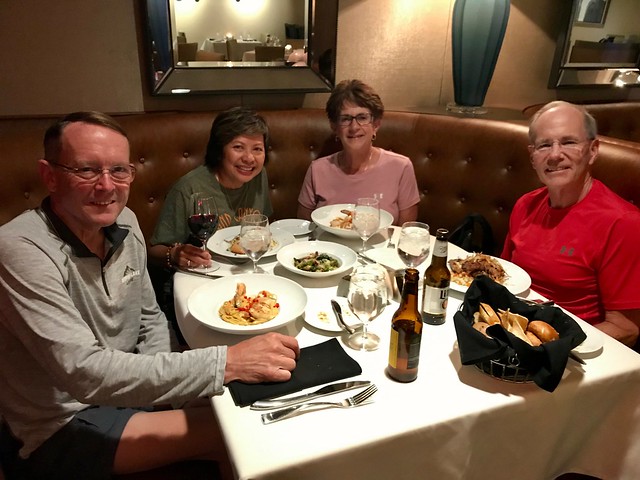 A great meal with great friends

To top off a delicious meal Mona Liza twisted arms to get us to agree to share a Creme Brulee.   A surprise addition to that was when our server showed up with a complimentary serving of four huge strawberries dipped in chocolate!  Two of the strawberries disappeared so quickly they didn’t make the photo below. 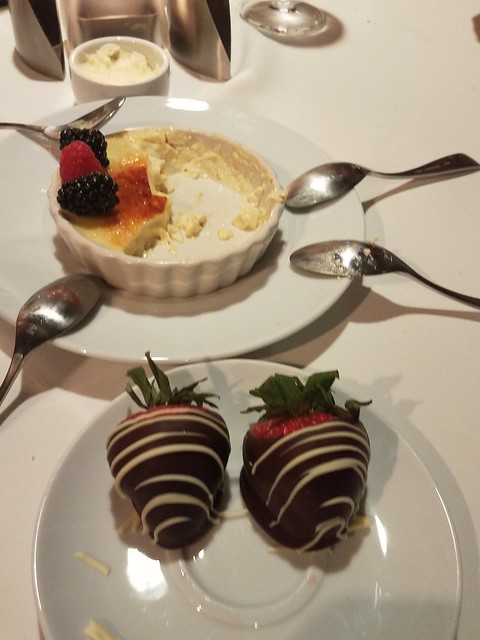 The next morning we were up and about early, as we had a long drive ahead of us.  Steve and Mona Liza were staying one more night so we said our good-byes to them and headed out.  By the way, if you ever stay in this park be careful as it is only 30 amps (which is not a problem).   In the morning both motorhomes experienced dangerously low voltage (which is a problem).  Steve later informed us that the power was so bad the day we left that they unplugged and ran their generator.  He couldn’t even report that to the office as it was closed that day and the next! 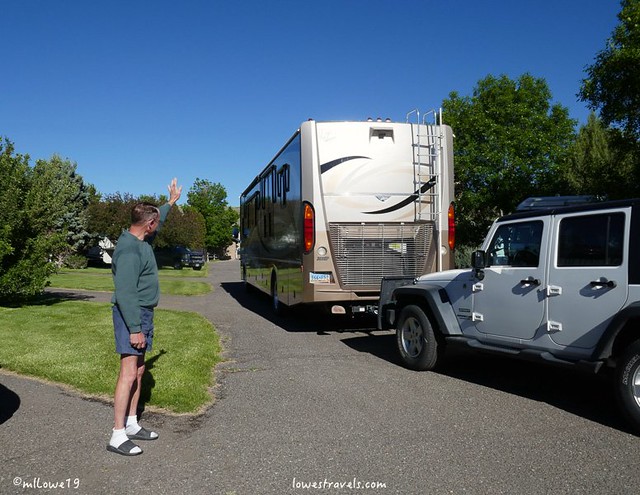 See you in the Fall!

We had over 500 miles to drive to get home to Boulder City from Jackpot, so we decided to divide it into two days.  We made the first day a long drive (330 miles) to a park in the little town of Caliente, NV, which made the second day a drive of  only 170 miles.  The highway (U.S. 93) is a smooth, two lane road without much traffic and the snow covered mountain ranges along the way made for some great vistas.  Please pardon the bugs on the windshield in the photos below.  It seems that when you clean the bugs off, more magically appear! 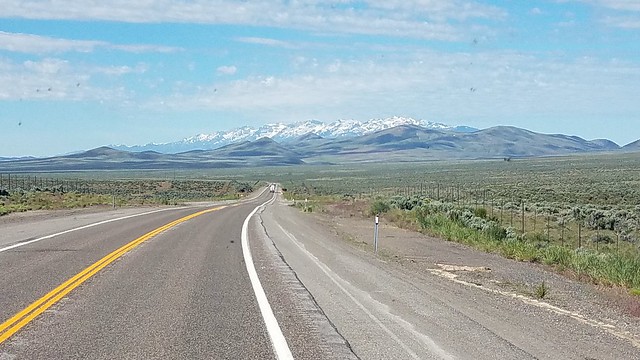 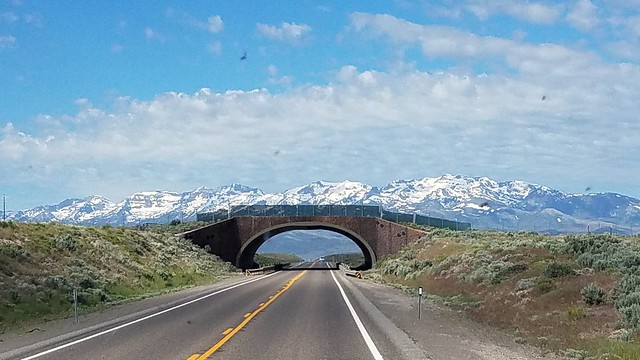 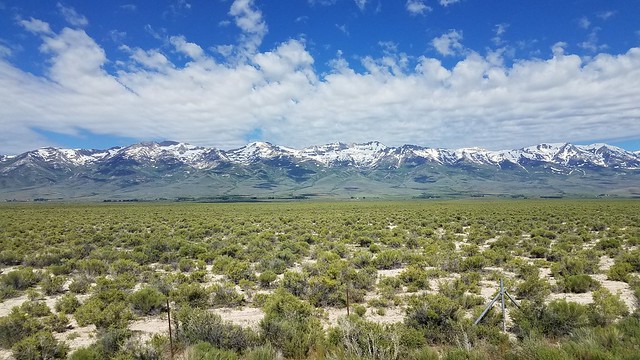 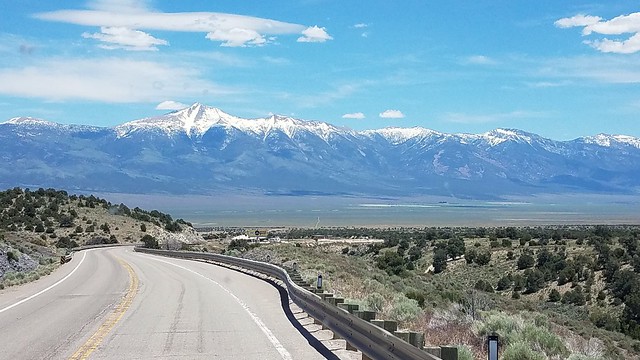 Wheeler Peak, the second highest peak in Nevada, is part of Great Basin National Park.  During a visit to the park a few years ago we hiked almost to the summit before being stopped by ice on the trail (and exhaustion). 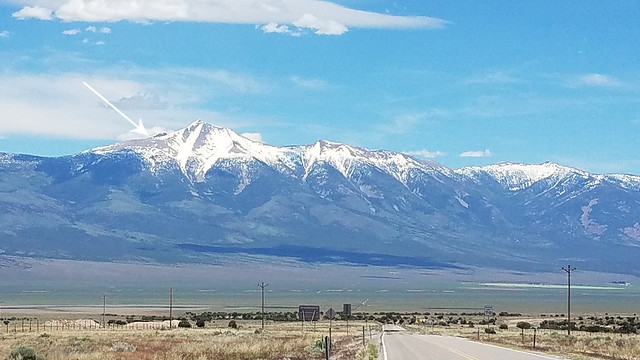 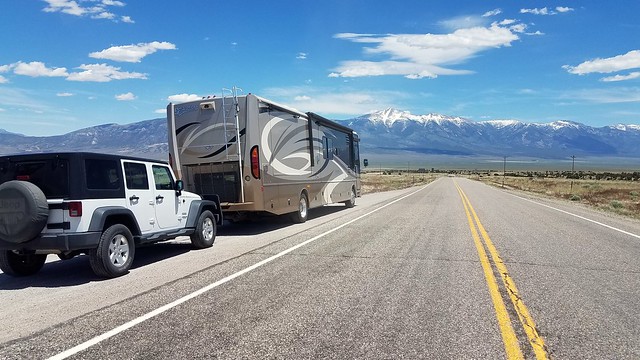 Wheeler Peak in the background

After a good night’s sleep in Caliente we continued our journey, passing through some scenic cliffs just south of the town. 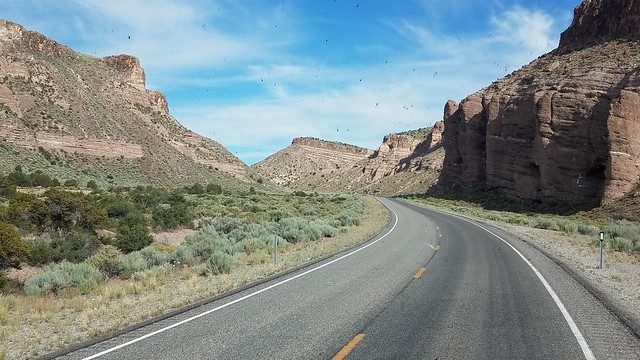 Once through the cliffs and over a high pass we descended into a wide plain where the highway stretched straight in front of us for miles and miles. 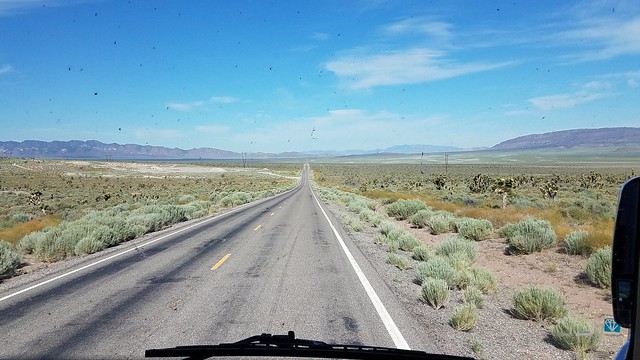 After zipping around Las Vegas on the interstate we arrived back home safe and sound.  After some time unpacking we settled in to enjoy the backyard before heading down to nearby Hemenway Park to check out the Big Horn Sheep, who enjoy feasting on the grass there. 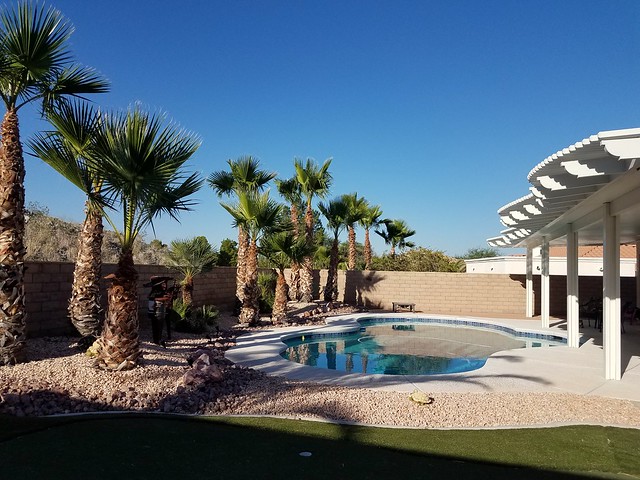 Big Horn buffet with Lake Meade in the background

We plan to stay put in Boulder City for most of the summer so blogs will be few and far between for a while.  But as the weather changes and the kids head back to school we plan to head into central Colorado in September.

28 Responses to Hitting the Jackpot (Nevada) With Friends