Saturday morning dawned with bright sunshine lighting up the snow on the mountains overlooking Provo, UT.  We pulled out of Utah Lake State Park a bit after 9:00 heading north on I-15.  After just a few miles we exited the highway on to UT-52 and drove east for about 3.5 miles.  At that point UT-52 ends at the intersection with US-189.  We then headed north through the beautiful Provo Canyon and continued for 21 mile to Heber City. 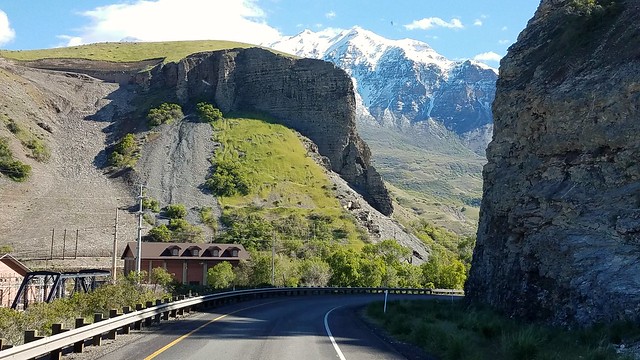 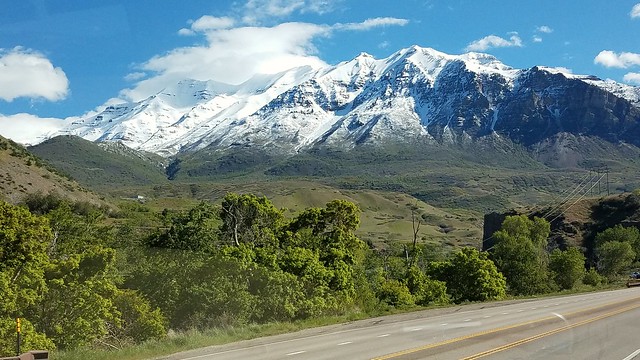 In Heber City we turned north (left) on to US-40 and continued for 18 miles to where it intersects with I-80.  We then headed east on I-80 into Wyoming.  It was about 150 miles on the interstate to Rock Springs, where we exited the highway on to US-191 north. 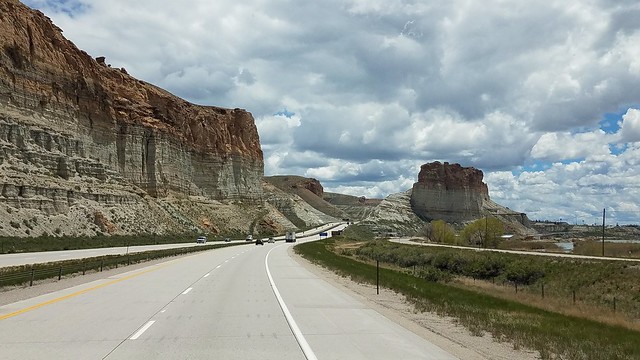 There is certainly a sharp contrast between driving on I-80, filled with truck traffic, and US-191.  Apparently not too many people were headed into central Wyoming on that day, as we saw very little traffic (or any other sign of life, for that matter except for cattle and pronghorn). 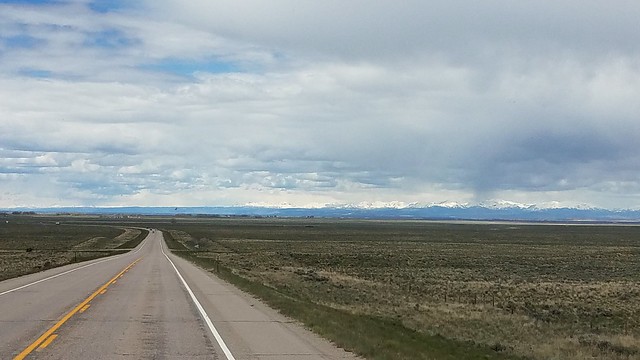 After 40 miles we came to the tiny crossroads community of Farson, where we turned right (east) on to WY-28.  It was a 75 mile drive across the high prairie and over a high pass before descending into Lander, where we had a reservation at Sleeping Bear RV Park.  The first half of the drive on WY-28 was straight across open prairie, not too exciting.  But for the second half of the drive the road goes over South Pass (over 8,500 feet), where it is still winter! 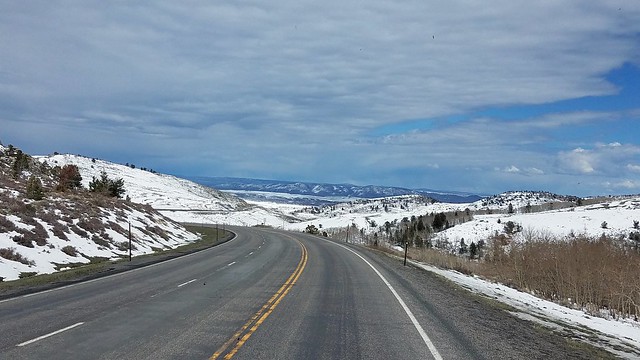 We arrived at the Sleeping Bear RV park after a drive of over 300 miles (more than we like to do in a day) and settled into our site.  The park sits on a hill overlooking the town of Lander.  We pulled into our site nose first to give us a great view of the town and distant mountains.  The only down side is that the little dog area is right in front of us, allowing for a bit of foot travel around our site.  But the park isn’t that big so we think use of the area will be minimal. 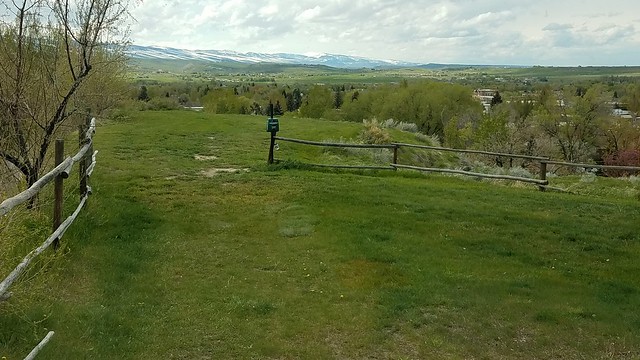 View from the front seat of the motorhome

On our first day in Lander the weather report had the possibility of thunderstorms, so we didn’t want to stray too far from cover.  So we drove a few miles south of town for a visit to Sink Canyon State Park, one of the “must see” spots in the area.

The state park is named for a portion of the Popo Agie River where it flows into an underground limestone cavern, named the Sinks, and emerges a quarter-mile down the canyon in a pool named the Rise.   We began our tour at the small visitor center next to the Sinks.  From there you can walk a short distance to a point where you can see the water disappear, then take a short path down to the water. 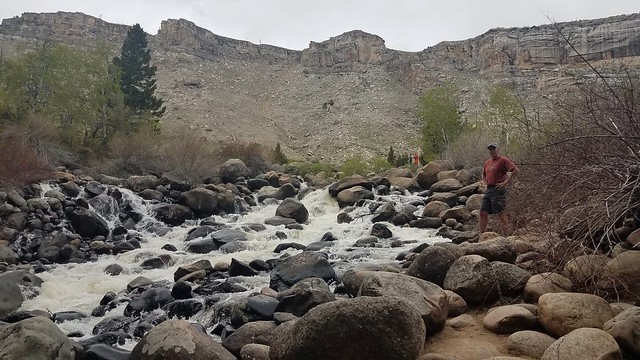 The Popo Agie River just before the Sinks 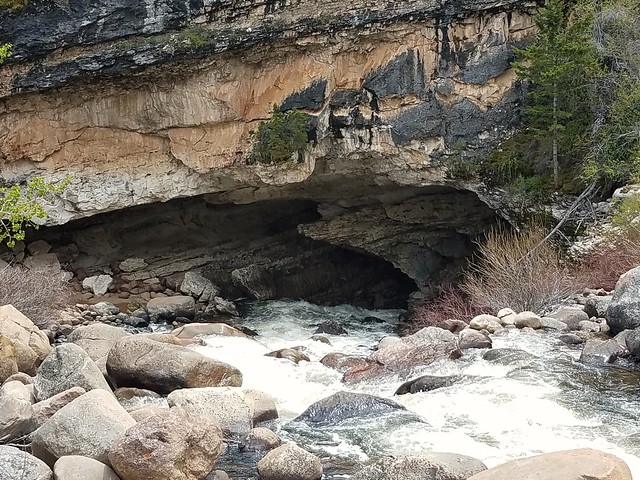 The river heads into the Sinks

Just inside the alcove the water flows into a little pond and disappears. 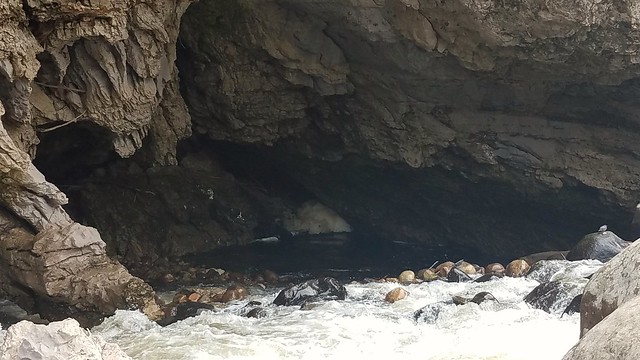 During periods of heavy snow melt the volume of water in the river exceeds the capacity of the Sinks.  Water then overflows that spot and the excess spills over into a seasonal stream bed called the overflow channel.  The snow melt hasn’t begun in this area yet since it continues to snow even though it is the end of May. 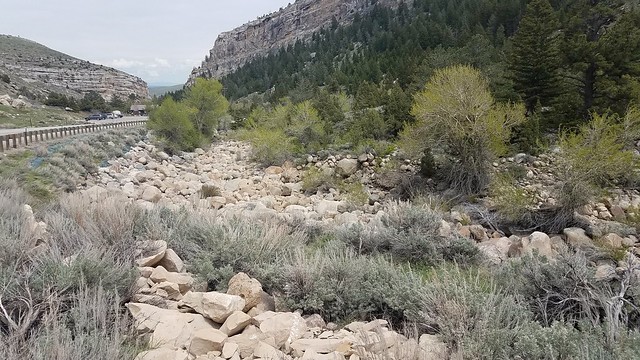 About a quarter mile down the canyon the river reappears in a large pool called the Rise. 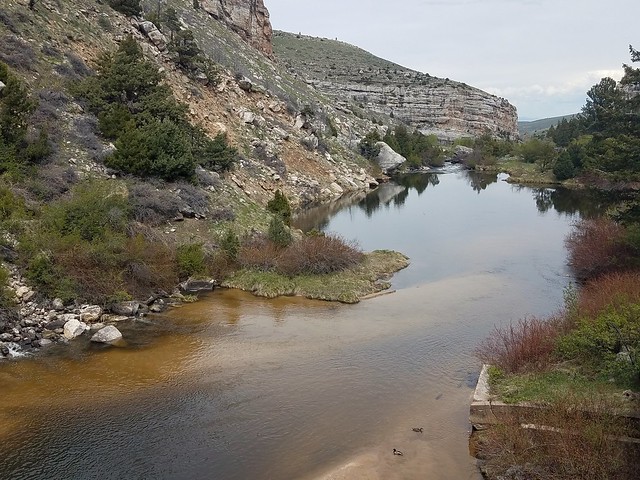 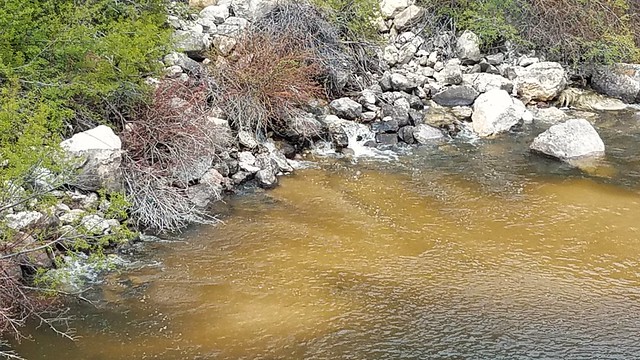 Note the water flowing out of the rocks

At one time no one was certain that the water emerging at the Rise was the same water disappearing at the Sinks.  But dye tests have shown that the water is the same and takes over two hours to make the 1/4 mile journey.  Geologists think that there are many winding underground passages the water has to work its way through before it bubbles back up at the Rise.  It is also likely the water underground mixes with water from other smaller sinks in the area, as the volume of water entering the Rise is greater than the volume entering the Sinks.

We then drove further up the canyon and came upon a series of rock walls high above us. 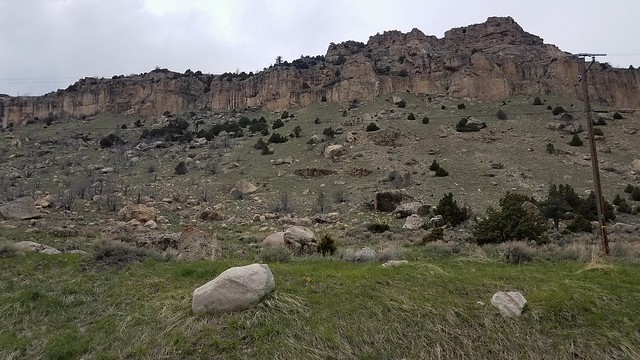 We were surprised at the number of vehicles parked along the road.  Where were all the people?  A closer look at the rock walls above us revealed a number of climbers hanging on ropes as they climbed the steep face of the walls. 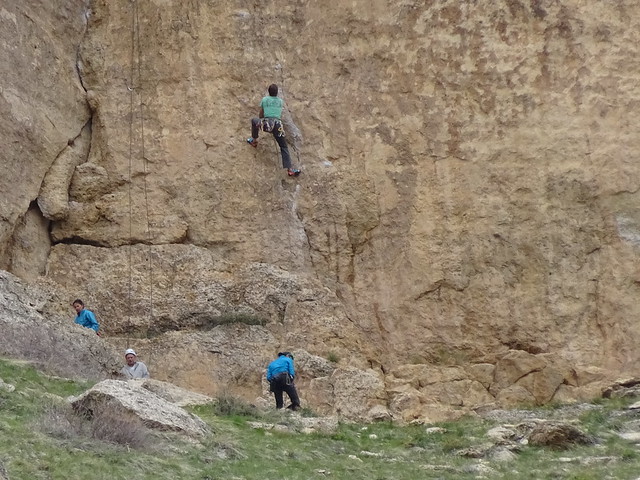 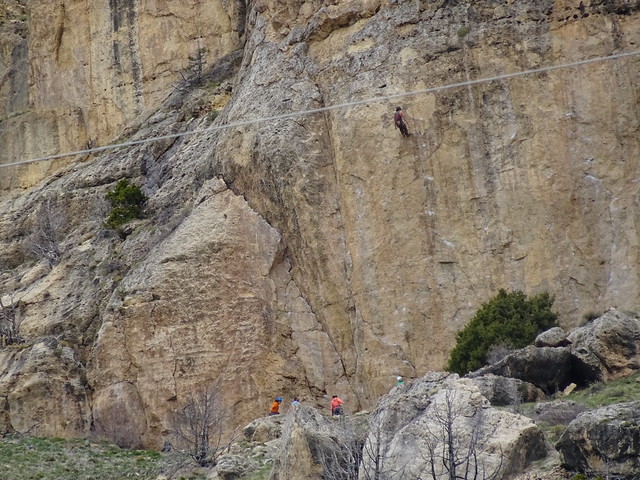 The next two days have rain in the forecast so our outdoor adventures may be limited until later in the week.  But we always find something interesting to do to keep us busy.

21 Responses to Traveling to Lander, WY