South Fork Indian Canyon, located just a few miles northwest of Kanab, contains an alcove along a steep cliff with a nice display of pictographs painted between 452 AD and 62 BC.  The trip to the alcove involves a drive through some deep sand and a short hike down a steep cliff.  To get there we headed north on US-89 for 7.2 miles.  Just past mile marker 71 we turned west on Hancock Road.  After 5.9 miles on the paved Hancock Road we turned left (south) on the dirt road 50.  It is not really a dirt road as much as a sand road.  A four  wheel drive vehicle is required as the sand is very deep in spots. 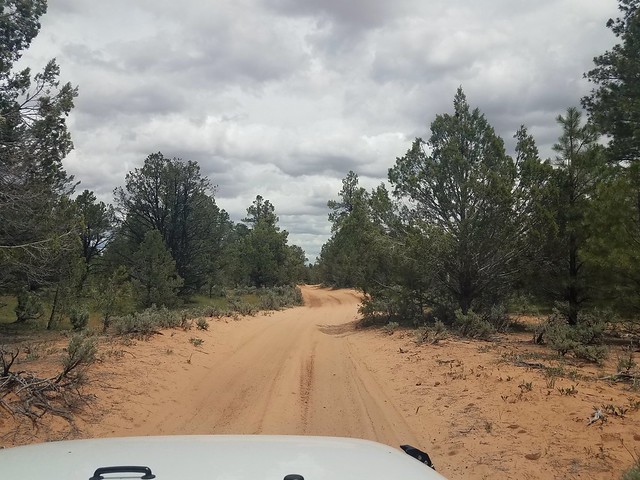 The road runs right along the boundary for Coral Pink  Sand Dunes State Park, passing a sandy, steep path leading into the park. 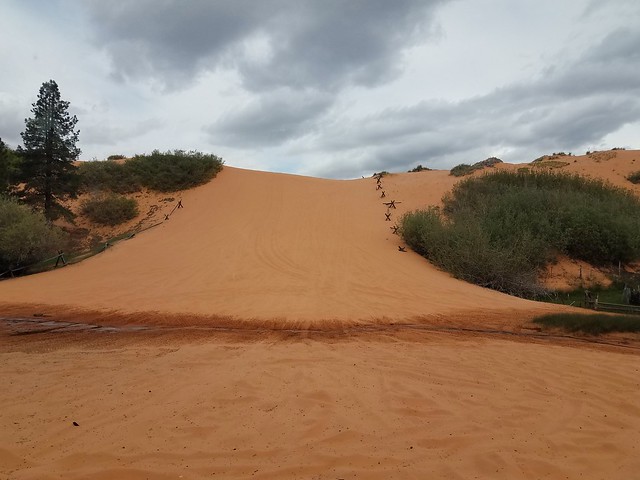 After 3.4 miles on the narrow, sandy path the road ended in a small parking area at the trailhead. 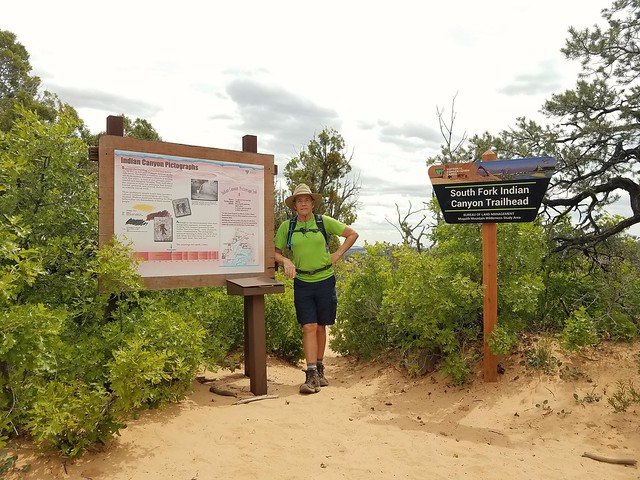 Sue and Dave (Beluga’s Excellent Adventure) drove to the trailhead during a recent visit.  But they decided to skip the hike to the pictographs when they saw the sign indicating that there was a 1700 foot elevation change. 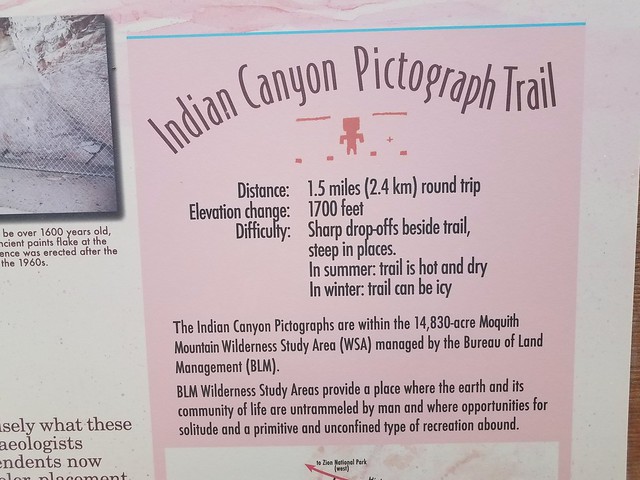 Oops, turns out someone added an extra zero when they made the sign, and the elevation change is only 170 feet! 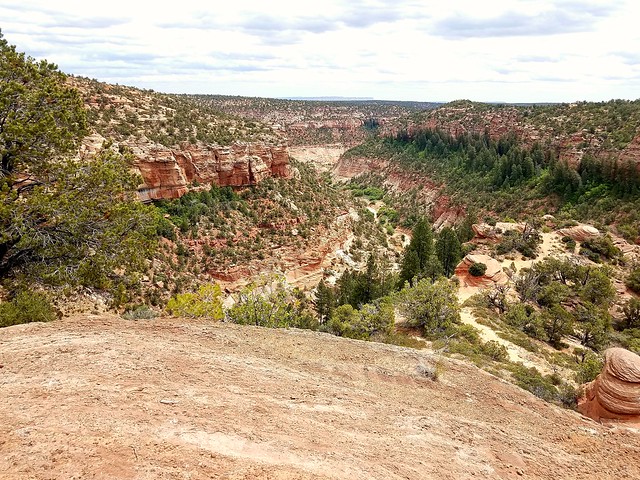 Canyon view near the trailhead

The hike to the pictographs is less than a mile (one way) but there are a couple of steep sections.  A flyer we picked up at the visitor center said the difficulty level was easy.  We would rate it more moderate due to that steepness. 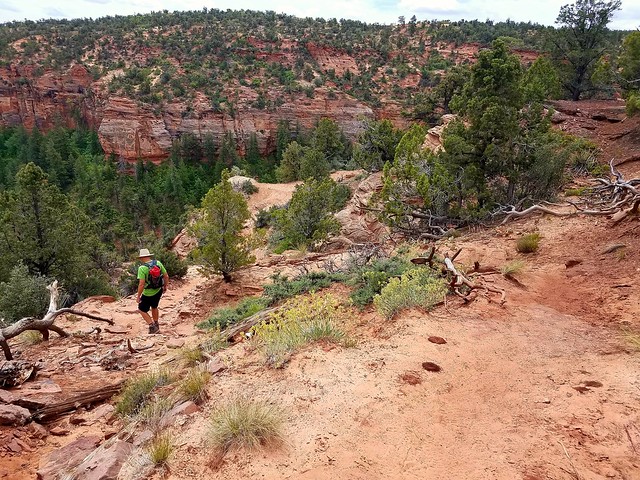 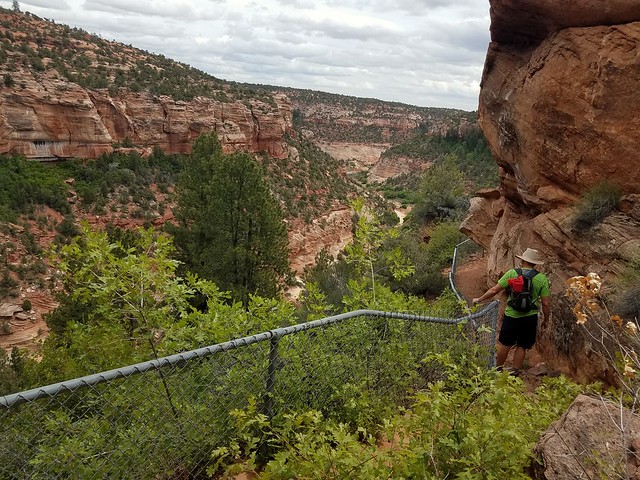 Making our way along the base of a high stone wall, we soon came to a large alcove containing the pictographs. 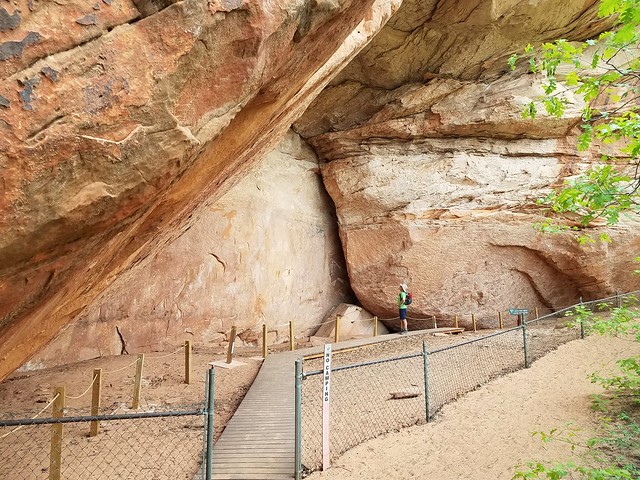 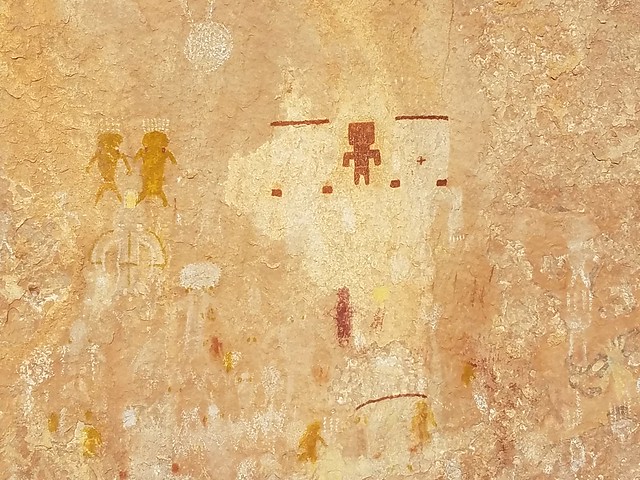 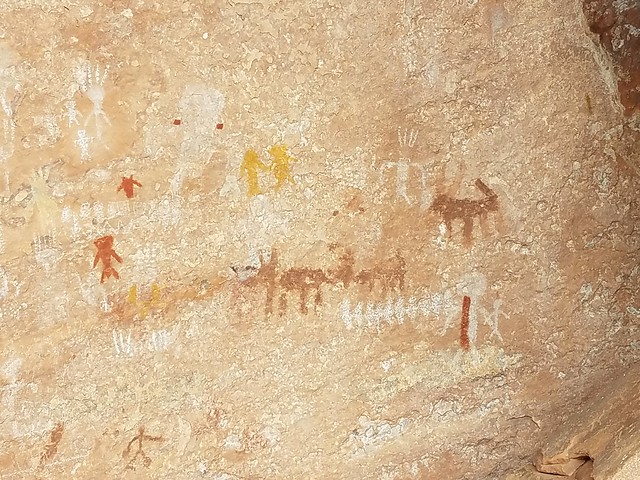 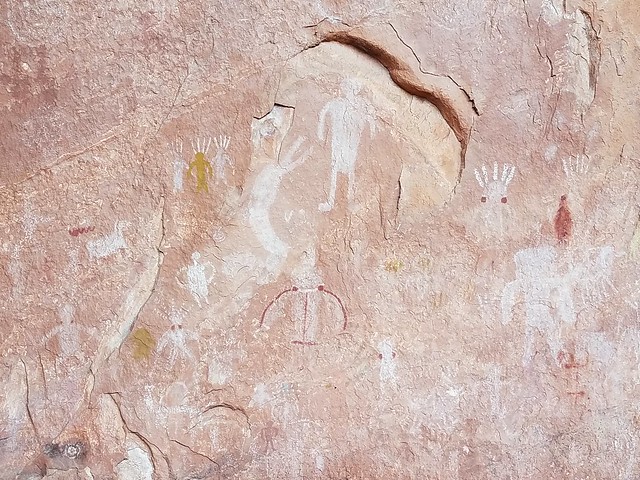 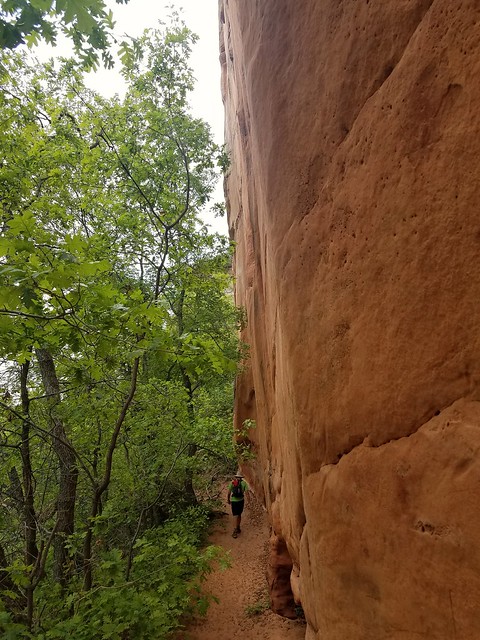 Heading back up the trail along the high stone wall 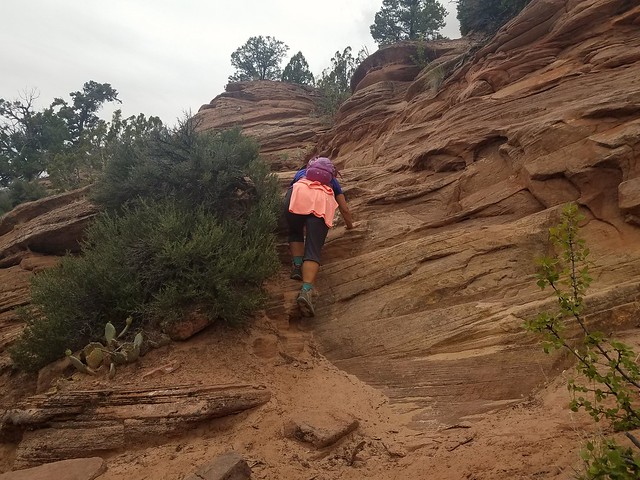 The steepest part of the trail

On our way back to Kanab we took a little side trip to visit Hidden Lake (called Underground Lake on Google maps).  To get to the lake we turned on to Angel Canyon Road.  This is a loop road that begins and ends on the east side of US-89 and runs through the Best Friends Animal Society,  which is the largest facility of its kind in the US.   About half way around the loop there is a turn onto a side road heading east.  This narrow dirt road soon crosses a cool, narrow channel of Kanab Creek before winding another .8 of a mile (stay to the left at the Y) ending at the lake. 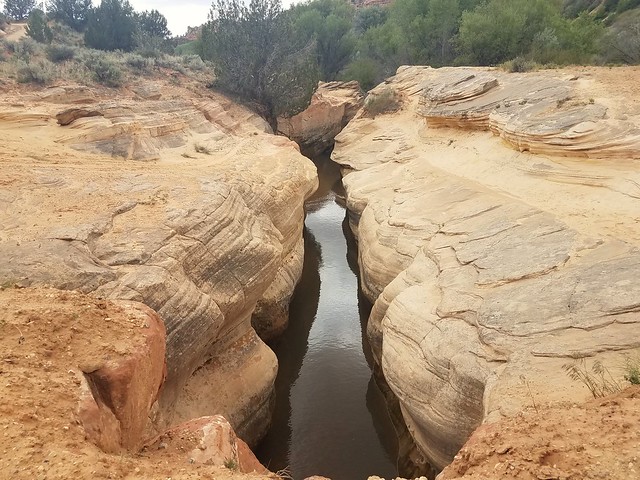 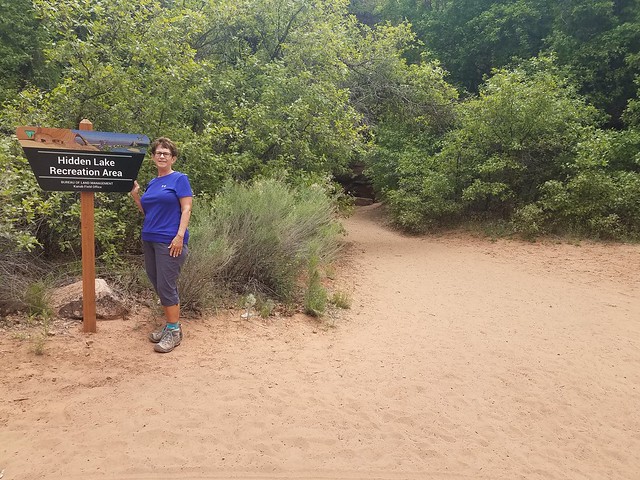 Hidden Lake is really just a small pond of water inside a rock alcove.  But it is a cool spot for a quick visit. 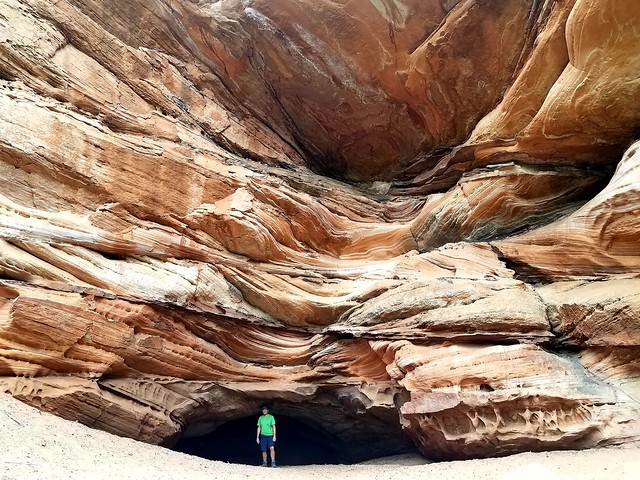 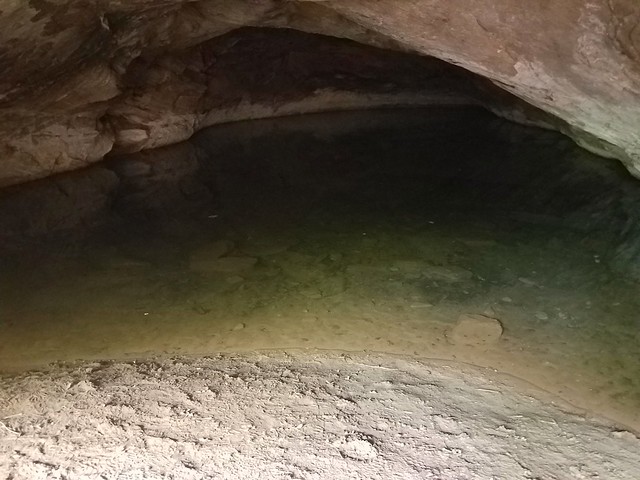 Driving back out, just a short distance from the lake, we spotted an alcove above us.  A narrow side road seemed to lead up to it so we drove up to check it out.  It appeared to be a storage area for early inhabitants of the area. 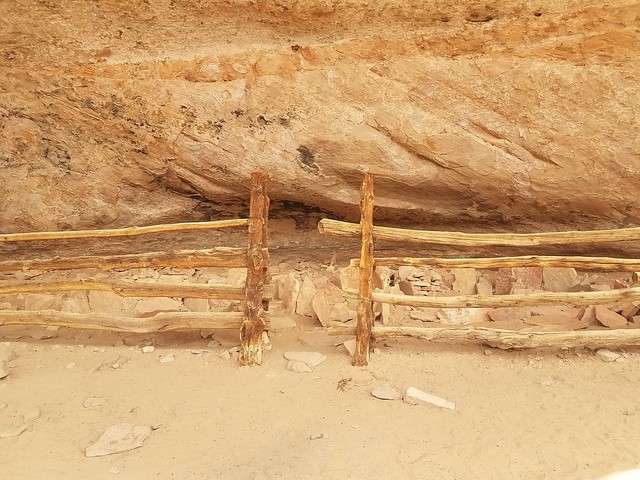 Someone at the visitor center later told us they believe the inhabitants built round storage containers (cisterns) and filled them with a variety of things including grain and even dead bodies at times. 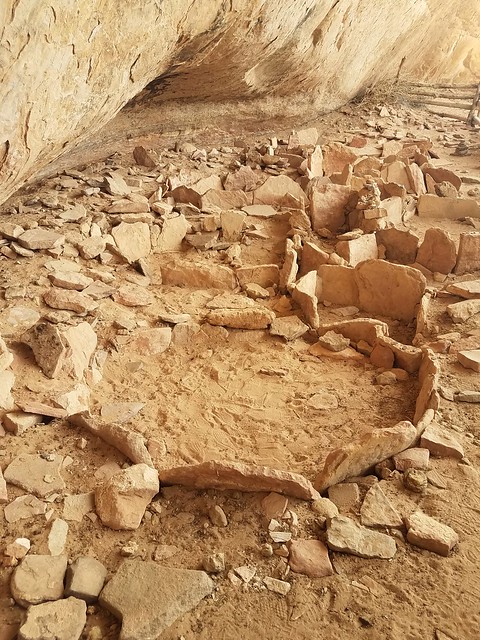 Several round cisterns are bordered by slanted flat rocks

Along the east side of US-89 between the two junctions with the loop of Angel’s Canyon Road you can see a few large openings in the rocks. 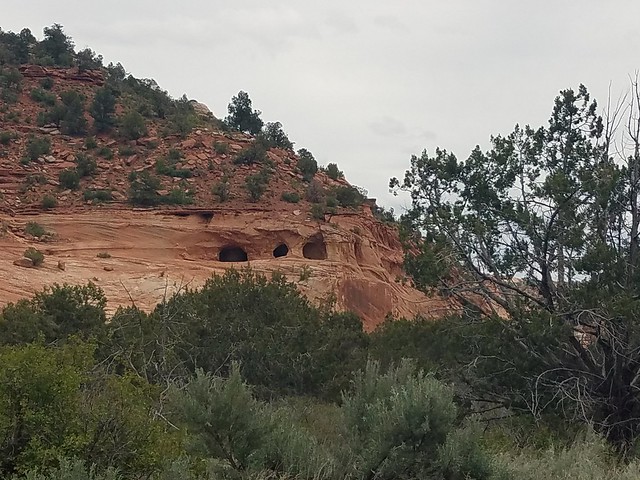 These openings are part of what are called the Sand Caves.  Just a bit before mile marker 70 there is a small area on the west side of the highway where we parked.  After crossing the highway going east we found a path leading to the steep wall of slickrock.  It is a bit of a climb to get up, but after a short distance there is a path along the ridge leading to the caves. 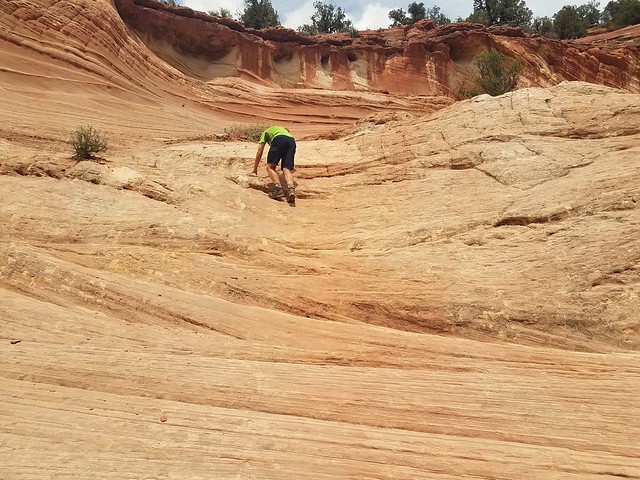 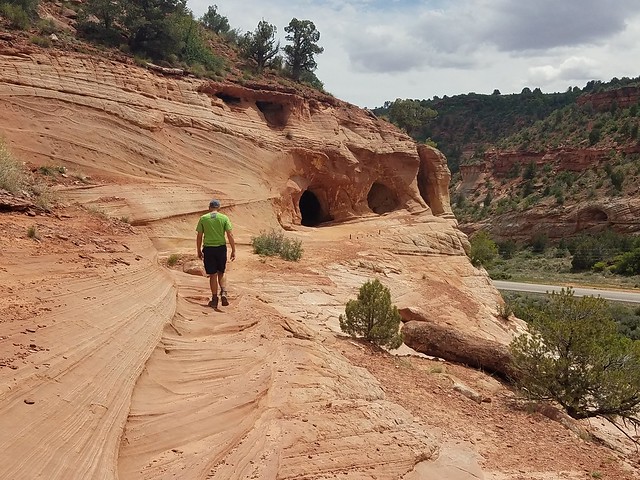 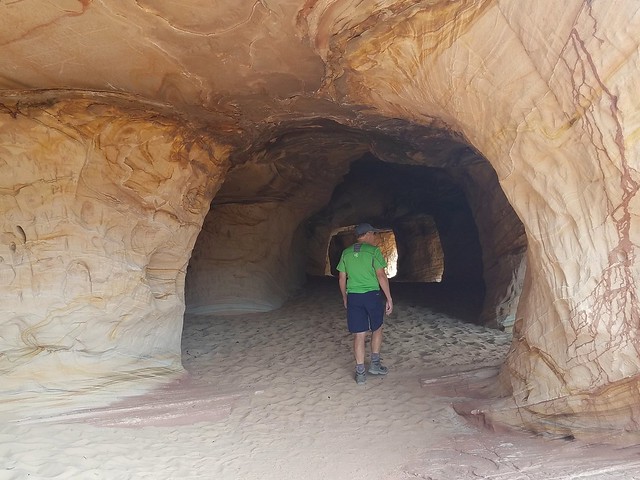 These sand caves were man made when they began mining for the sand in the area.  The mining process was short lived, leaving theses cool caves for us to explore. 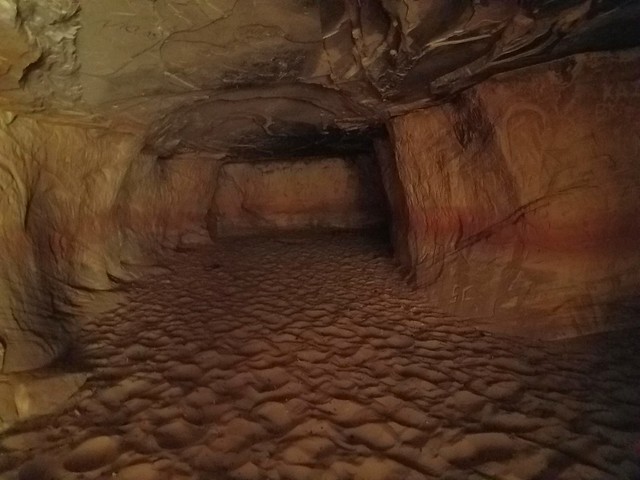 The end of the caves 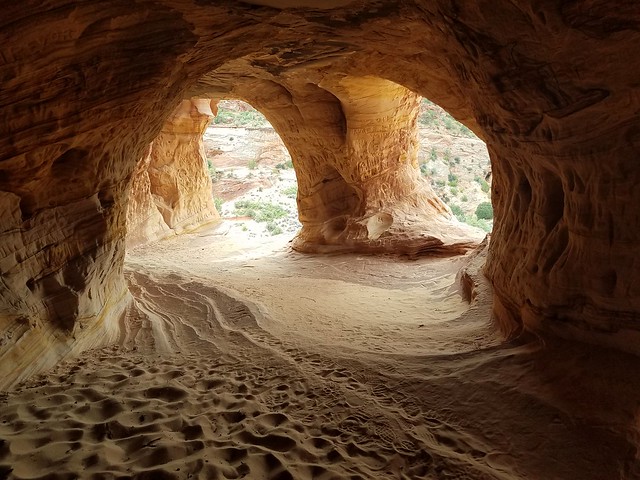 Three adventures within a few miles of Kanab!  And the coolest place to visit is in the same area.  We plan to go there tomorrow so stay tuned!