Heading East – Part 4 (the final one)

The final stop on our eastern summer tour was a visit to Clayton, NY.  Clayton is a small village on the St. Lawrence River in the beautiful Thousand Islands region.  It is also the home of Pam’s mother, Fran.  We go to Clayton each summer to visit with Fran, complete some chores around her house, and spend some quiet time along the river. 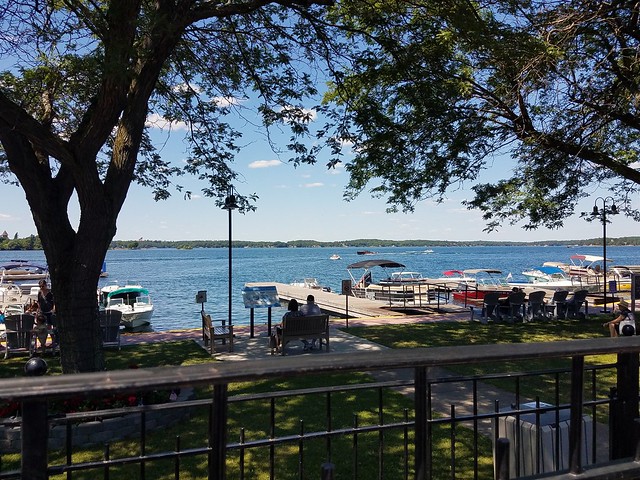 Along Riverside Drive, the main street in the village, is Rotary Park Docks, a great spot to enjoy a beautiful view of the river.  At street level  two rows of benches overlook the small, grassy park area and the docks for small boats.  We enjoyed many evening hours eating ice cream and watching the boats while checking out some great sunsets. 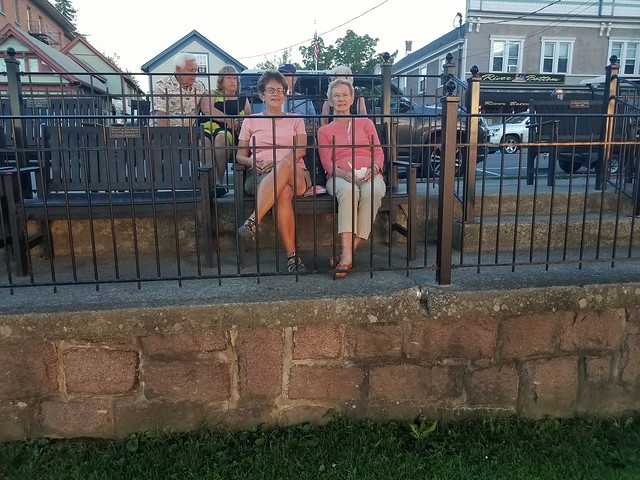 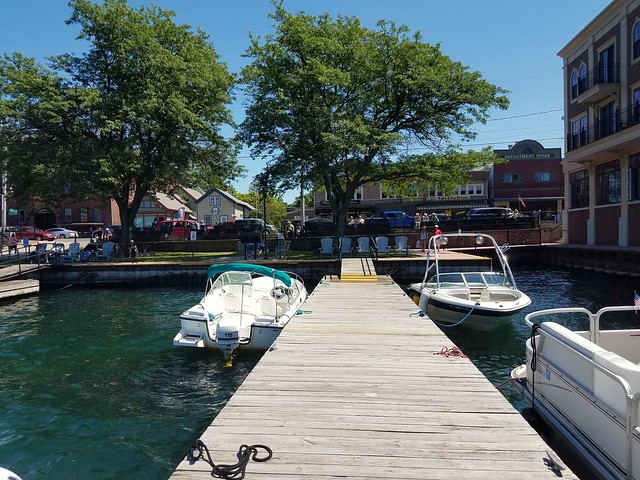 The view from the end of a dock

Pam’s sister also lives in the village.  One day niece Daniela came over with her buddy Buster to give us our dog fix for the visit.  Buster is full of energy and enjoys cleaning out the food dish of the resident cat. 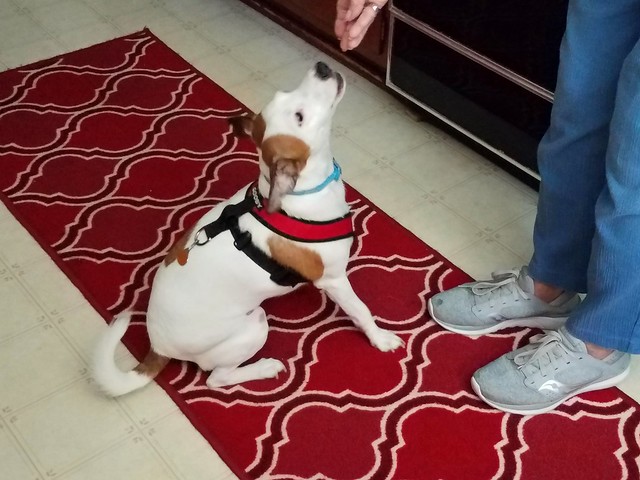 Clayton is a sleepy little village for most of the year.  But during the summer it comes alive with visitors, many brought here to attend the numerous weekend activities.  The highlight of our visit was the 1000 Islands Charity Poker Run, with over 75 power boats (sometimes called Cigarette Boats) participating.  For two days the village streets were filled with power boats on trailers pulled by fancy trucks. 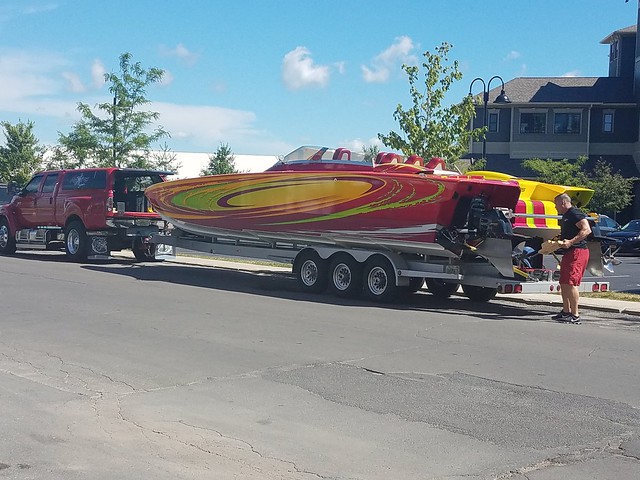 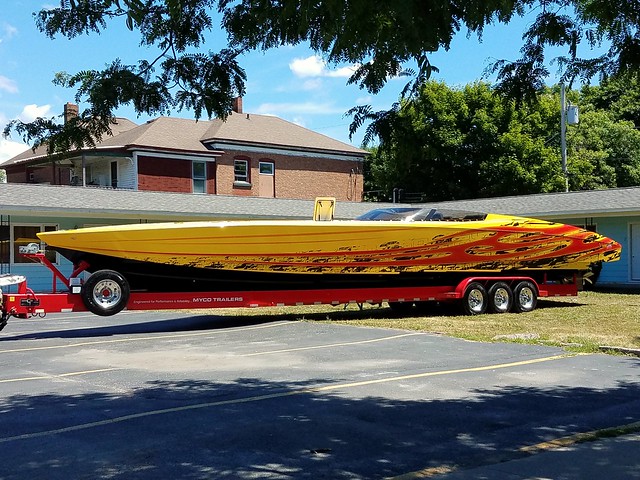 Clayton is located on a U-shaped peninsula with water on three sides.  Most of the boats were put into the water at a public boat ramp on one side of the village. 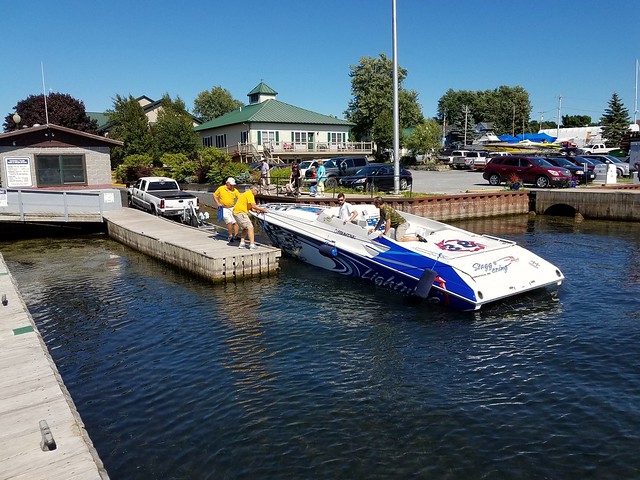 Once in the water they went around to the other side of the village to the Municipal Marina, a new facility adjacent to the new 1000 Islands Harbor Hotel.  The normally quiet dock area was filled with people checking out the boats. 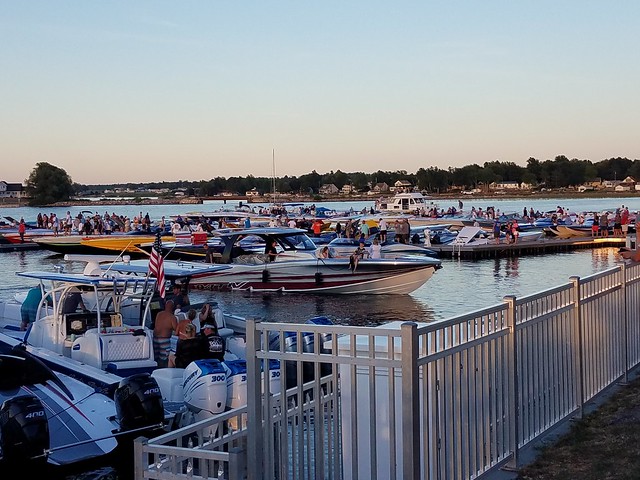 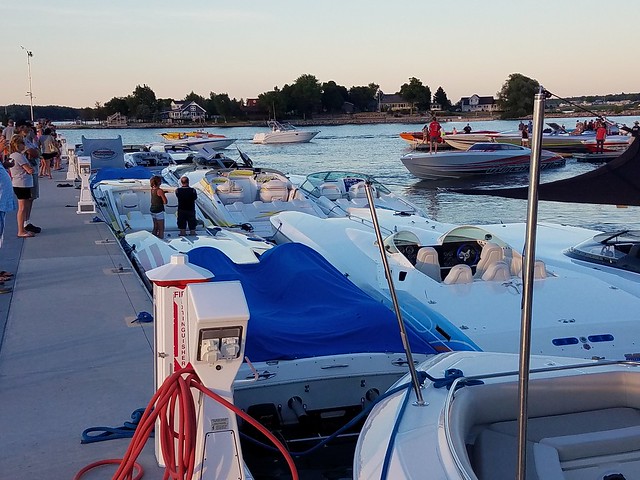 These boats are very powerful (and expensive).  The red boat below had an open engine cover, allowing visitors to check out the engines. 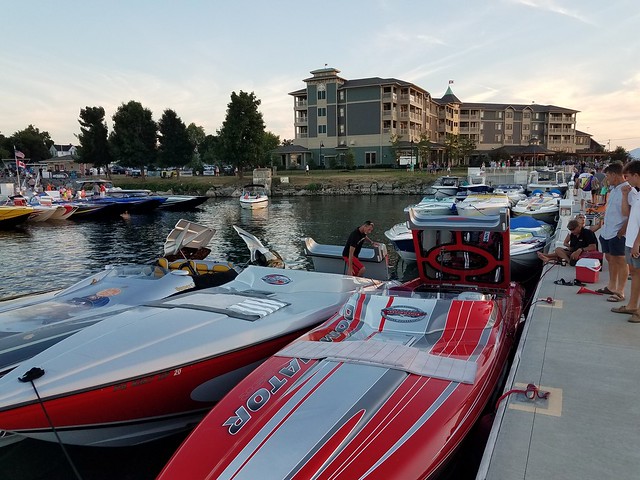 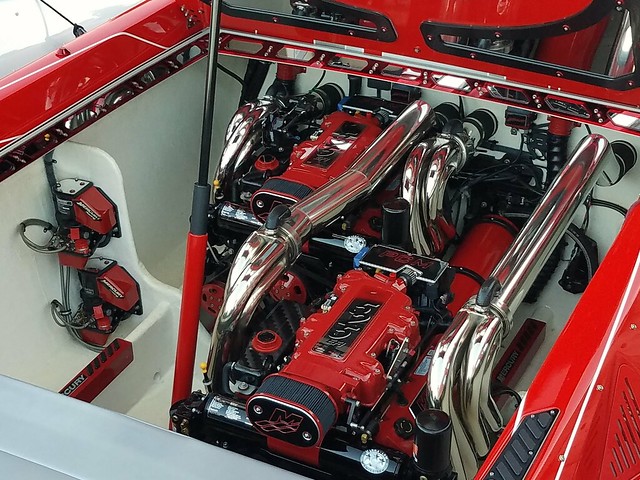 One of the many activities for the weekend was an evening street fair, where a couple of the large boats were on display. 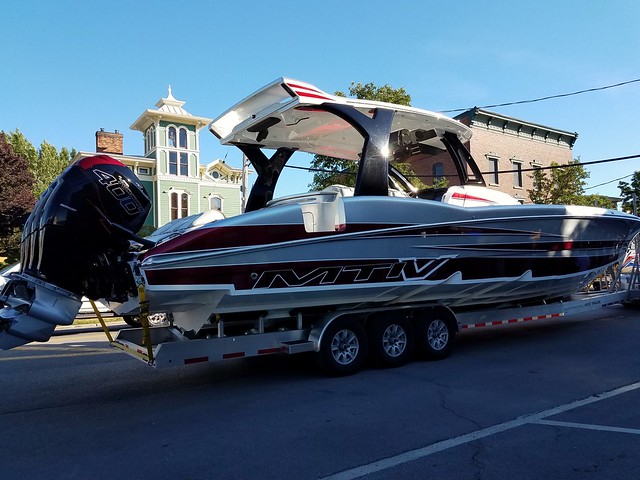 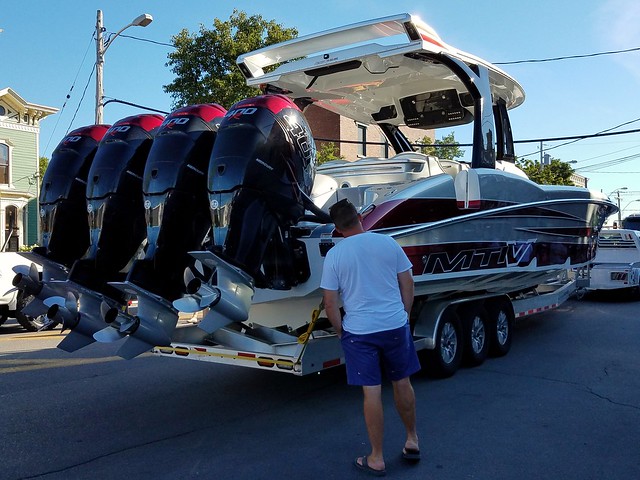 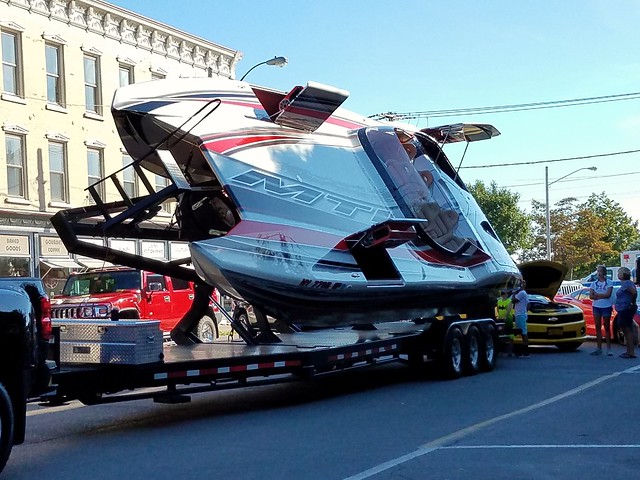 This is not a sport for the financially challenged.  The boats are very expensive, as are the trailers that transport them and the trucks that pull them.  Below is one of the odder looking trucks parked in the hotel lot.  Its license plate revealed it to be from the state of Washington. 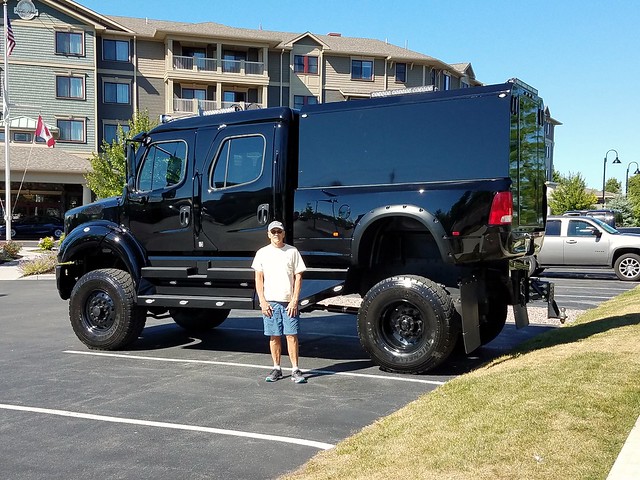 Saturday morning all the participating boats pulled out of the marina and assembled in the main channel of the river in front of the village. 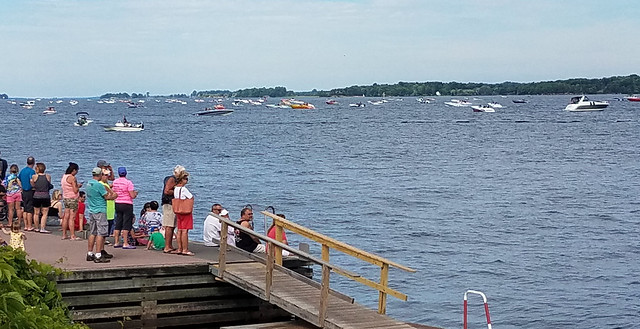 At the appointed hour they all raced up the river at the same time.  Their planned route would take them around Grindstone Island, then south for about 15 miles to Cape Vincent.  They would return to Clayton for lunch before heading up river for a long voyage of about 45 miles to Ogdensburg and back.

Right after the boats headed out that morning we said our good-byes to Fran and drove back south to Dave and Sue’s spot along Conesus Lake near Geneseo.  We spent almost a week there enjoying some golf and doing a couple of minor maintenance tasks on the two motorhomes while dodging some rain.  Toward the end of our week the skies cleared a bit so we were able to enjoy a cruise on a nice pontoon boat belonging to one of Dave’s former business partners. 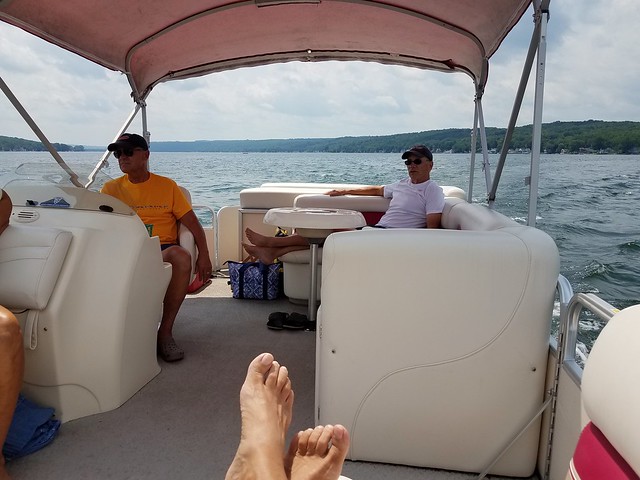 The captain and first mate (ignore the feet) 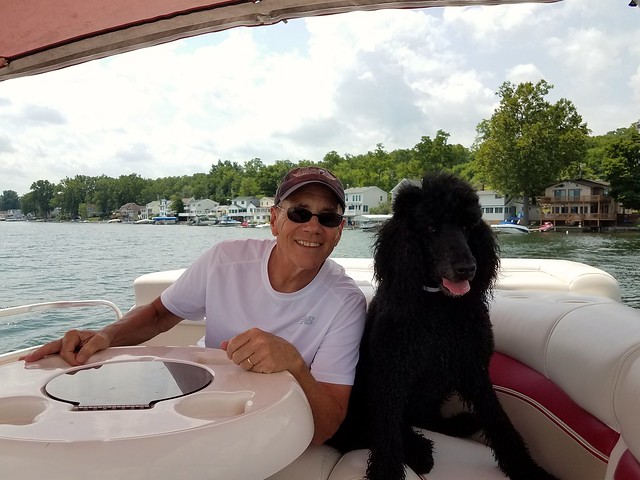 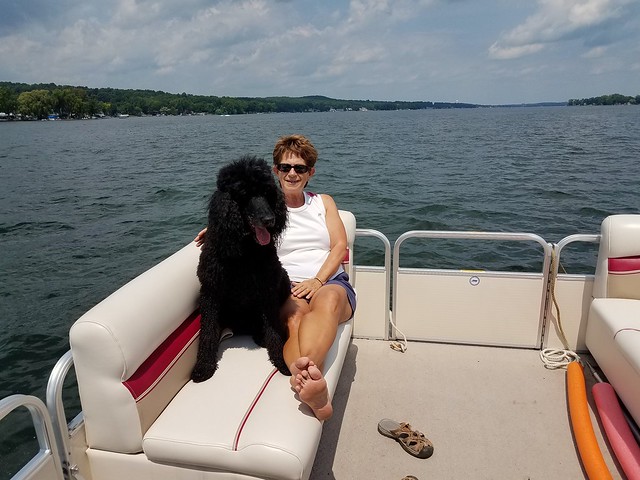 He loves being with Gramma Pamma

Toward the end of our stay the four of us traveled north of the lake to the village of Honeoye Falls for dinner.  Before eating we stopped at the nearby falls from which the village gets its name. 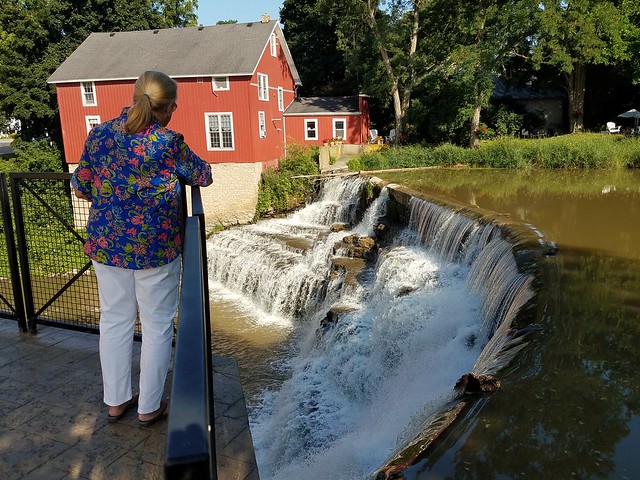 Sue in her classic pose

A few blocks north of the falls is the restored Lower Mill Building.  The Rabbit Room is an upscale restaurant located on the first floor.  It is only open on Thursday evenings and Saturday for lunch.  The menu is a bit pricey, but the food is excellent! 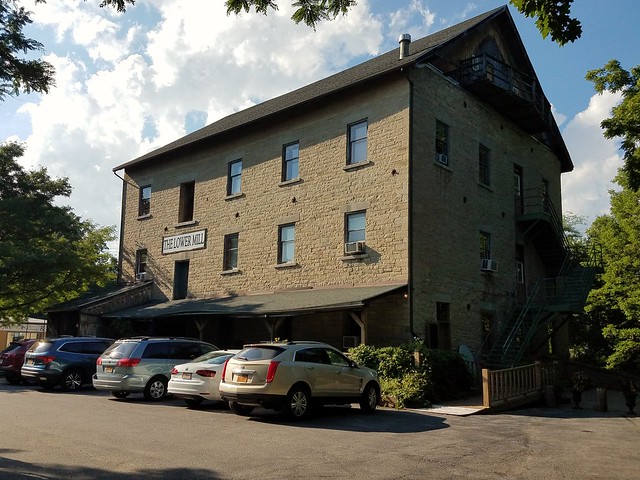 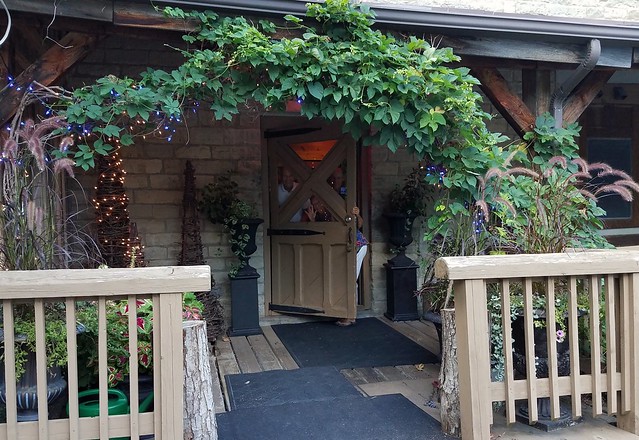 Can you spot three patrons behind the door? 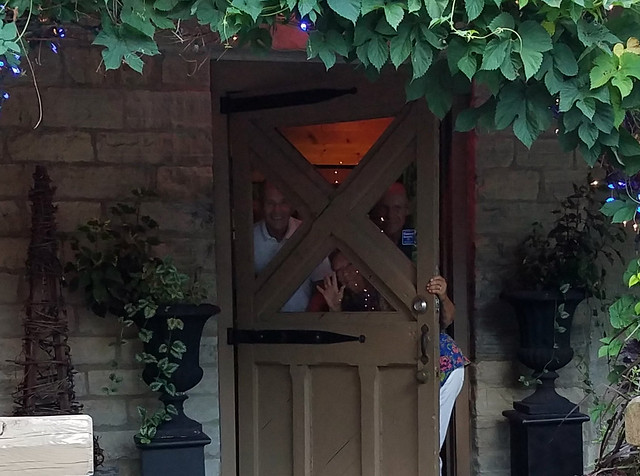 At the end of the week it was time to say good-by to Dave, Sue, and Lewis and begin our journey back to Nevada. 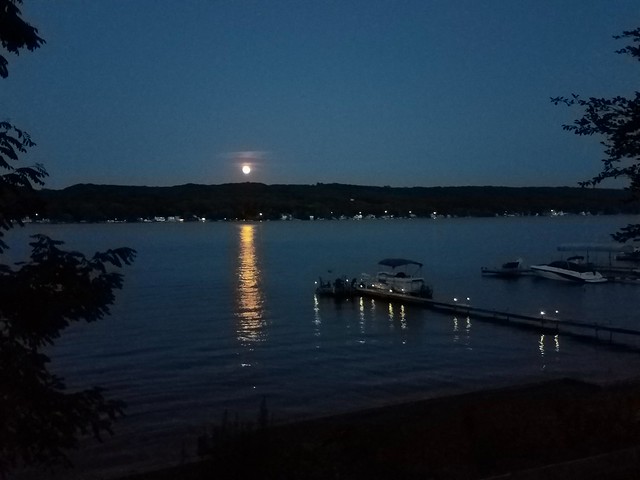 Final moon rise over the lake 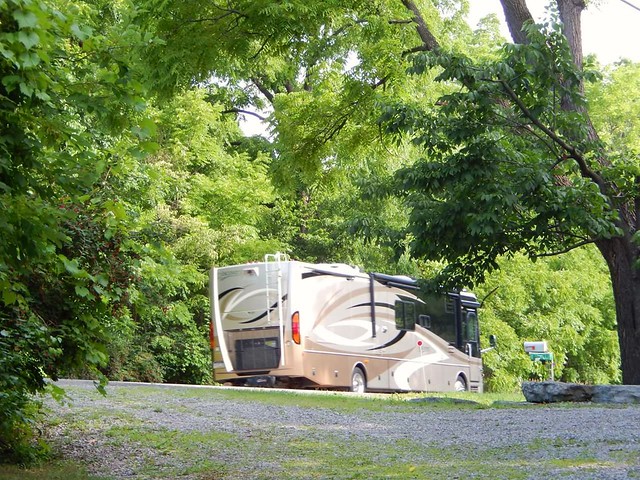 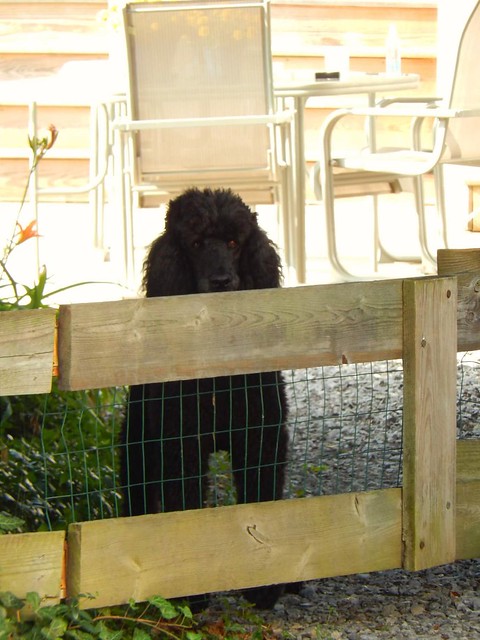 Where are they going?

Our plan is to drive back to Boulder City, NV to unload the items we retrieved from a storage unit we rented in York, PA.  We’ll stay there for a week or two before heading north to explore some locations in Idaho and Montana.  But plans have not been completed at this point.