Time sure flies by!  Hard to believe it has been a month since our last post.  We left you in Gaffney, SC where we waited to have the motorhome serviced.  Since we didn’t have an appointment, we knew we would have to wait a couple of days before they could fit us into their schedule.  But after waiting a day and a half they took the motorhome into the shop and began their work just after lunch.  After changing all necessary fluids and replacing two rear airbags the work was completed the next day, and we were back on the road heading north.

We stopped for one night at the Mayberry Campground in Mount Airy, NC.  Most people know the name Mayberry from the Andy Griffith Show of the ’60s.  Mount Airy is the hometown of Andy Griffith, and the fictional town of Mayberry is based on his memory of growing up.  It’s a nice little town with many shops and sights, many related to the TV show as the locals have cashed in on the Mayberry theme.  We’ve visited Mount Airy before and have seen all the Mayberry sights so we didn’t go into town.  Our main reason for this stopt was so we could visit our son Kevin’s alma mater, Wake Forest University, located about 30 miles south of here outside Winston-Salem. 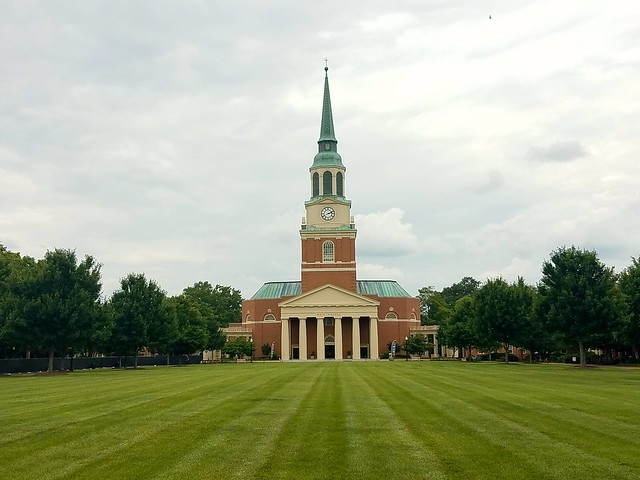 Wait Chapel on the main quad 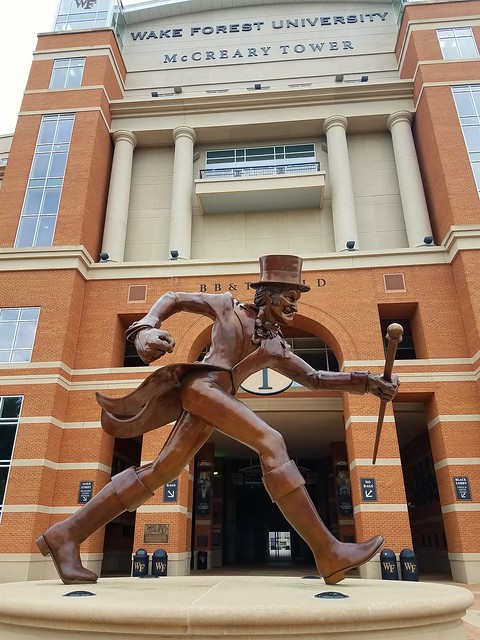 The Demon Deacon mascot outside the football stadium

Storms were predicted for the next afternoon so we were up early and drove about 50 miles further north to Ft. Chiswell, VA, where we stayed at the Ft. Chiswell RV Park for two nights.  This allowed us time to visit one of our favorite spots in this area, the Blue Ridge Parkway Music Center. 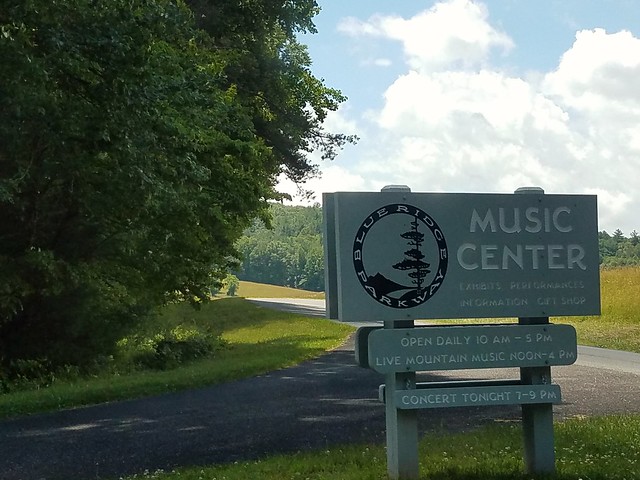 Every afternoon there is live music in a small covered area between two of the buildings.  On previous visits we listened to an impromptu jam session with a variety of people joining in.  This time we were treated to a nice “concert” by a local musician named Ron Ireland, who plays there the last Saturday of every month. 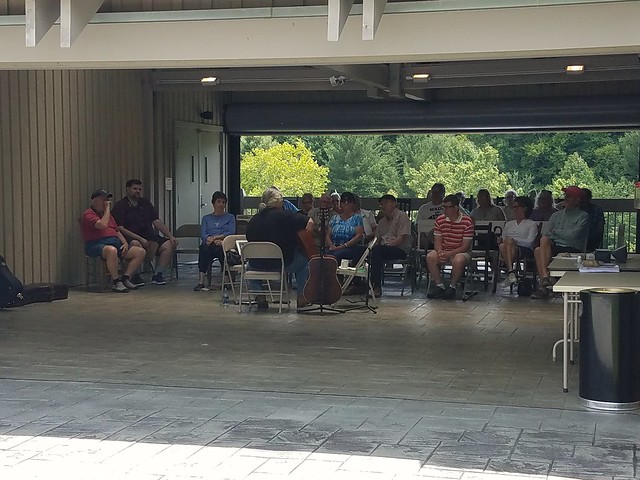 Concert in the breezeway 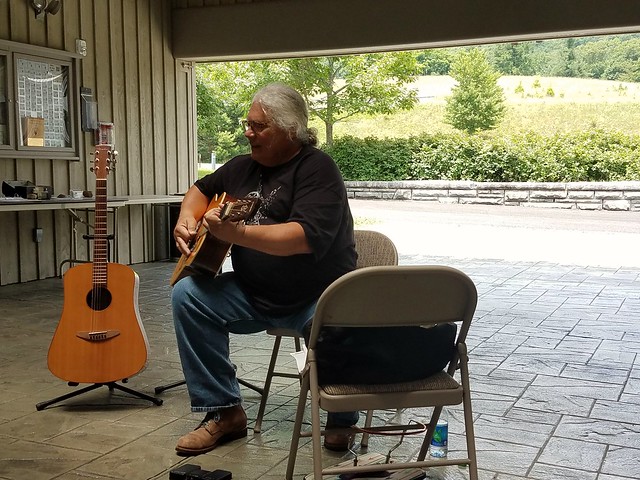 Later, as we drove through the nearby town of Wytheville, we got a laugh out of the sign outside a local elementary school. 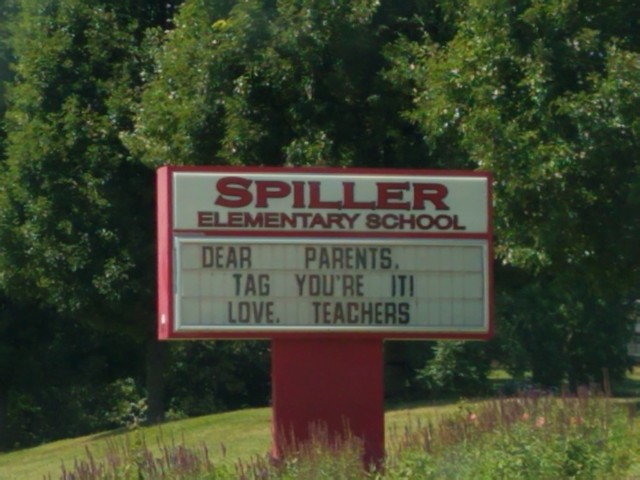 We then continued our trek north to our former hometown of York, PA.  Our daughter, Jessica, still lives there with her husband, Dan.  We spent quite a bit of time with them during a two week visit. 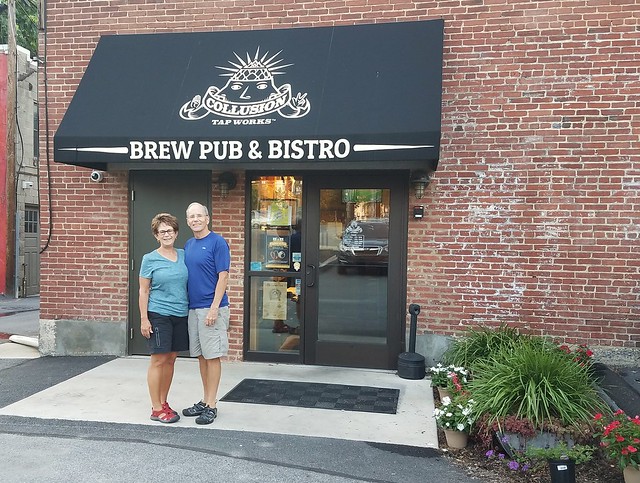 One evening we enjoyed an adult beverage and meal with them at Collusion, a new brewery in York.  We were surprised to find this pub in business since a high ranking governmental official has repeatedly told us there is No Collusion. 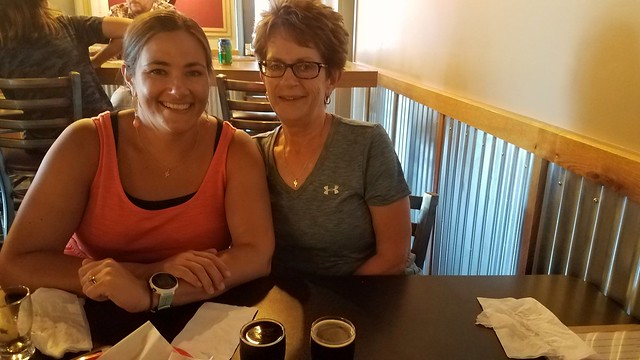 John’s nephew, Jamie, lives outside of Philadelphia and when he found out we were in York he invited us for a visit.  The event quickly became a family reunion as John’s two sisters and brother joined the party, along with four nieces and nephews and their children. 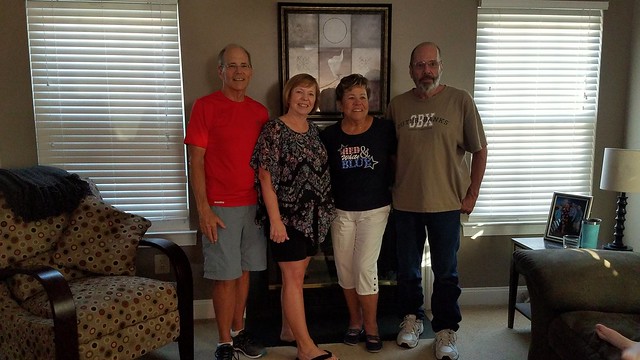 Despite the extreme heat and oppressive humidity, a splendid time was had by all participants! 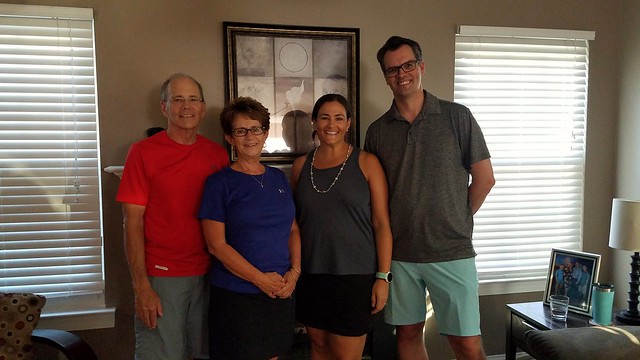 After a great visit to York we continued north, taking US 15 along the Susquehanna River.  About half way to our destination we stopped in Lewisburg, PA for a lunch break.  On the north side of the town we found the ideal spot to park a motorhome in a large, mostly empty parking lot behind a small strip mall. 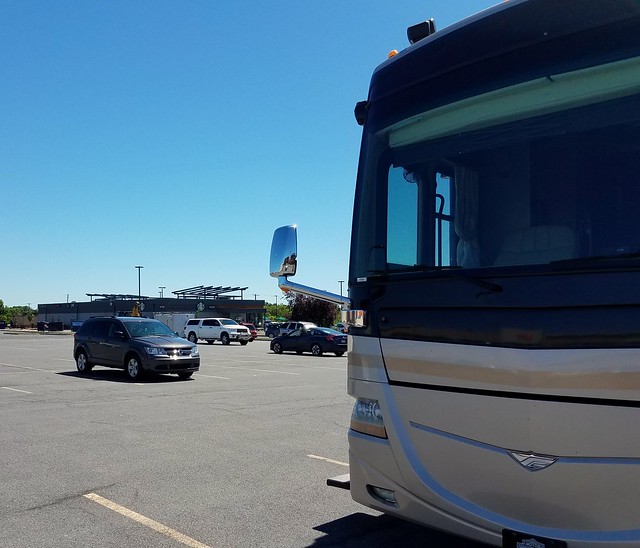 Can you see the signs on the strip mall in the distance?

The strip mall had two stores that are high on our list:  A Jersey Mike’s sub shop and one of those small chain coffee houses from Seattle.  Break time Nirvana! 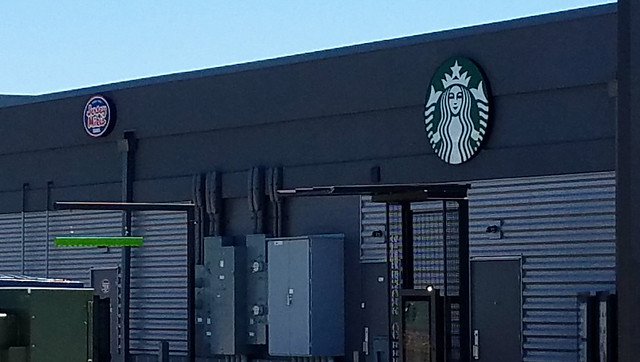 After lunch we continued our journey through the beautiful scenery of northern Pennsylvania and southern New York.  We exited I-390 at the small town of Dansville, NY  where we met friends Dave and Sue (Beluga’s Excellent Adventure), who guided us through the town on NY 256 north to their cottage on the west side of Conesus Lake.  We stayed here for a month four years ago when they still lived in a farm house a few  miles to the west.  At that time there was no structure on the lake property, as it was set up to park their motorhome there for the summer.  Since then they have constructed a small cottage, while maintaining the motorhome utilities and parking.  Our motorhome is backed up very closely, end to end, with theirs. 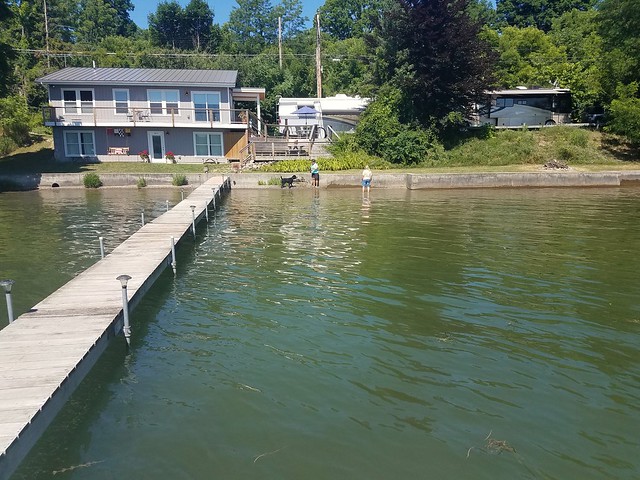 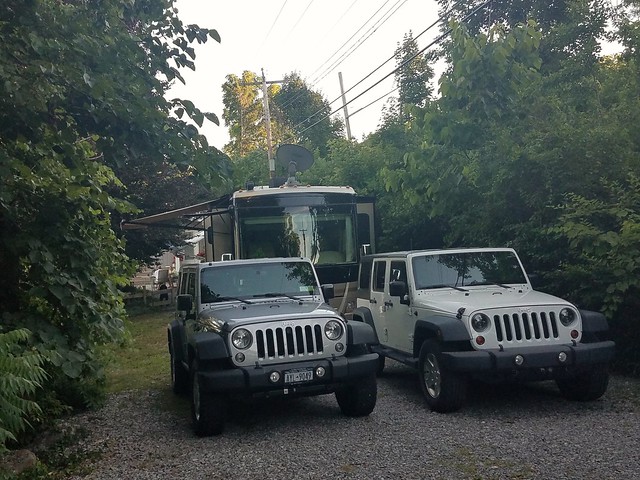 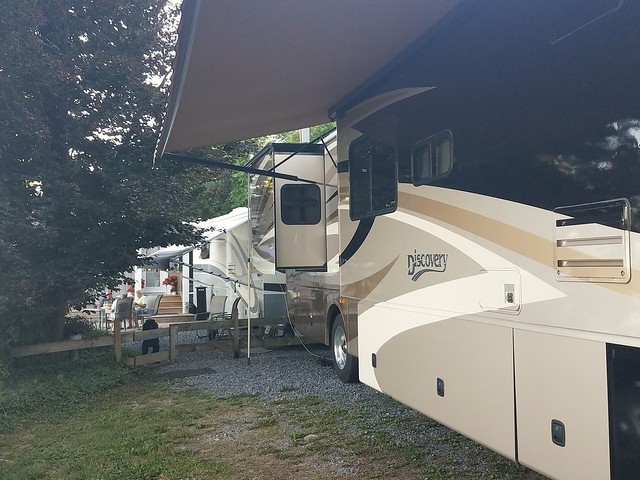 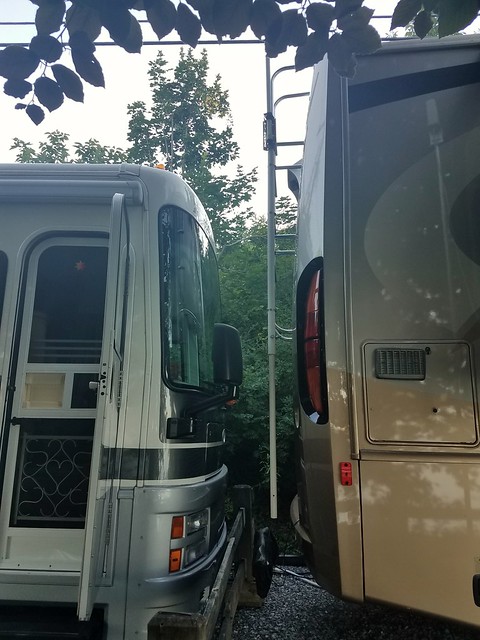 Tailgating to the extreme! 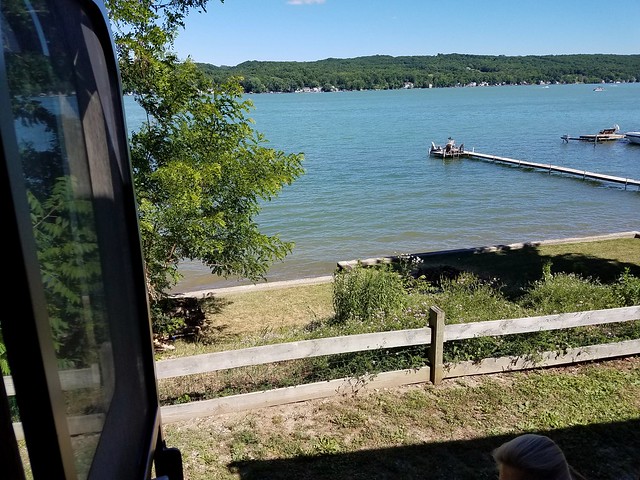 The view out our front door 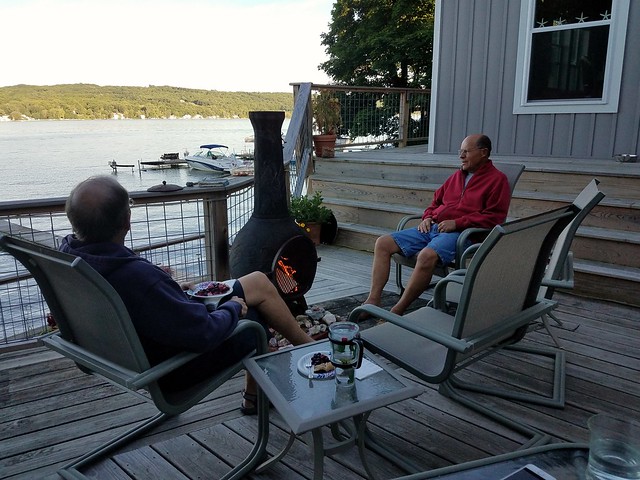 Deep intellectual discussion on the deck

While we enjoy spending time with Dave and Sue, our real purpose for staying here is to visit with Lewis. 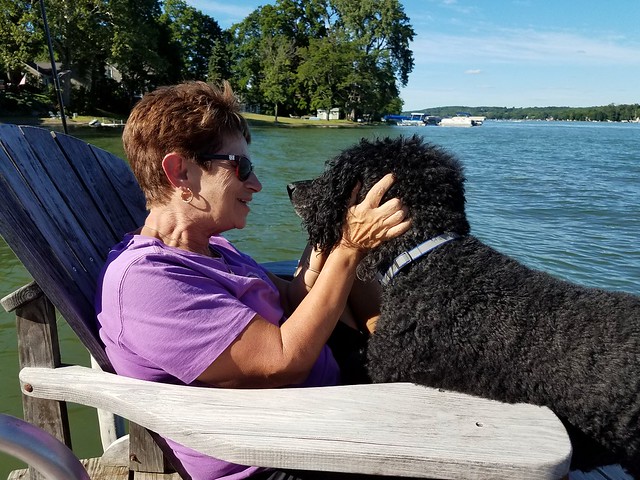 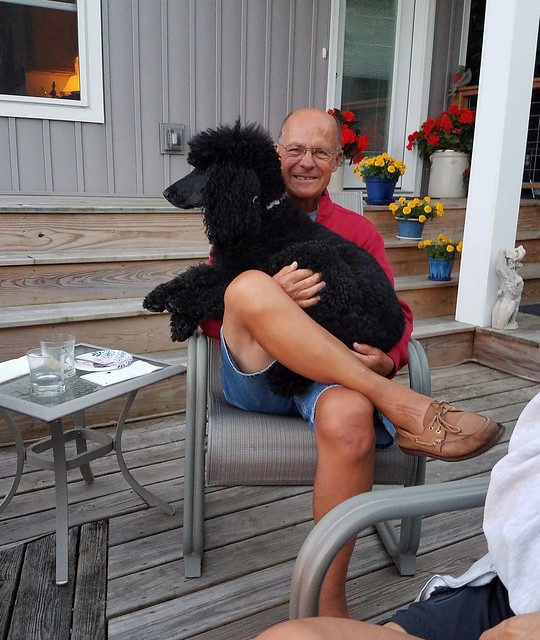 He thinks he is a lap dog 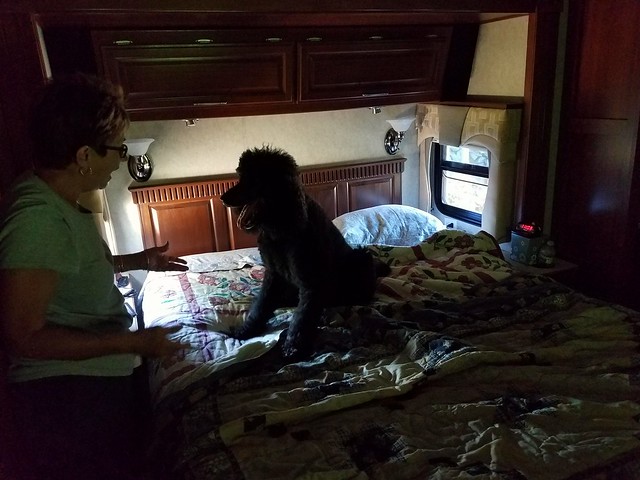 Lewis is very un-trained – he required detailed instructions to help make the bed! 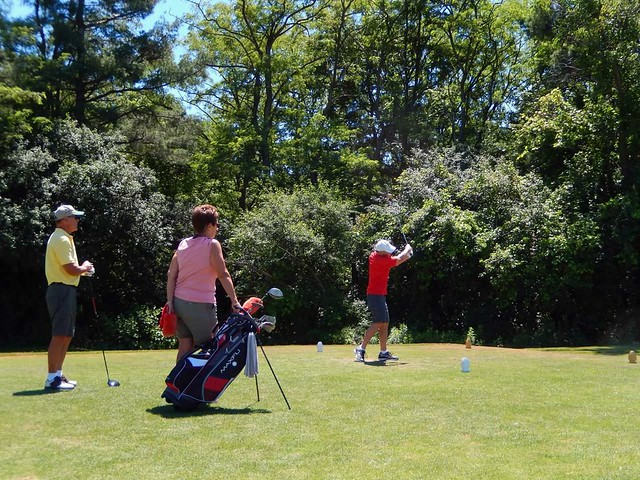 A bit of golf was high on the schedule

Pam’s mother lives in Clayton, NY, a small town on the banks of the St. Lawrence River.  After a few days on the lake we left the motorhome parked at Dave and Sue’s and headed north in the Jeep for a visit with her.