For many years before we retired we enjoyed touring the country on a 1999 Harley-Davidson Ultra Classic.  When we went full time in the motorhome, we purchased a trailer that would accommodate the bike and a car (front wheels on the trailer, rear wheels on the road).

We enjoyed the bike but found that we were not riding it much during our travels.  We also found that using the trailer was a bit of a hassle (take the car off, take the bike off, move the hitch to the car, move the trailer, etc.).  So in 2012 we sold the bike and trailer and bought our Jeep.  We always wanted a Jeep but since the manufacturer states not to tow a Wrangler with two wheels off the pavement, we couldn’t have one.  Once the bike and trailer were sold we were off to the Jeep dealer.  While we missed the bike, we loved the Jeep and the ease of towing it.

But we always said that if we ever bought another house, we would buy another bike.  When we bought the house in Boulder City recently, we decided to wait until the Fall to look for one since we would be traveling all summer (and will not take the bike with the motorhome).  But remember how quickly we found this house the first day we looked?  The same thing happened with the bike.  We were driving through Boulder City on our way to one of those chain coffee shops headquartered in Seattle when what do we see parked in an empty lot with a For Sale sign on it?  The exact bike we were looking to purchase in the Fall.  The next day we met with the seller (also a Boulder City resident) and struck a deal.  After a fun visit to the Nevada DMV for registration and four days from the time we first saw it, we were touring the shores of Lake Mead on our new ride! 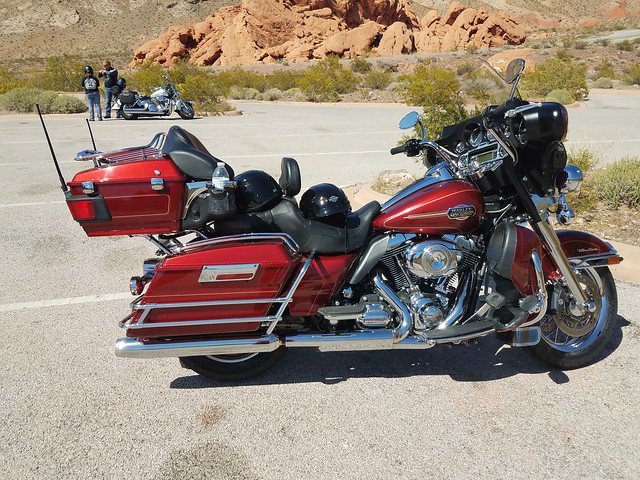 It’s a 2010 Harley Davidson Ultra Classic, almost identical (except the color and some improvements made by H-D) to the one we previously owned. 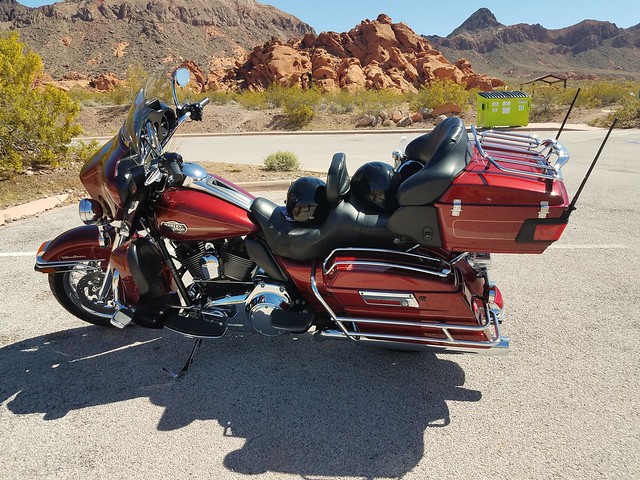 Our first ride on the new bike was along the west side of Lake Mead on Lakeshore Road.  This road runs for 14 miles from US 93 near Boulder City (and Hoover Dam) to an intersection where it becomes Lake Mead Parkway.  Continue on the parkway and you end up in Henderson.  We turned right and headed north on  Northshore Road (NV 168), which continues north another 55 miles to the small town of Overton, 10 miles south of its termination at I-15.

The road to Overton is one of the nicest motorcycle rides we have ever done.  The smooth road winds its way through colorful hills with stunning views all along the way. 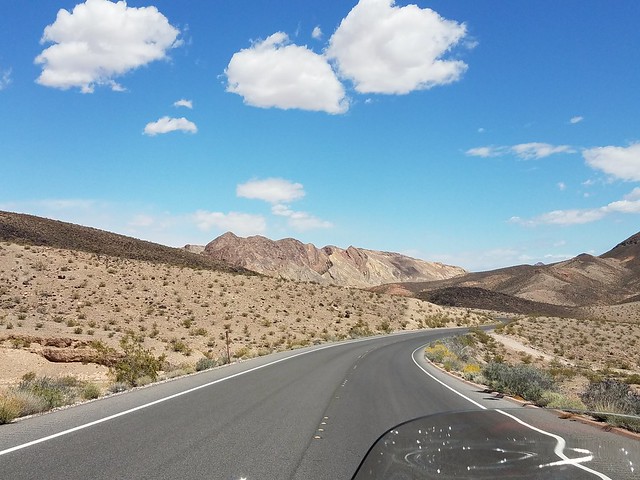 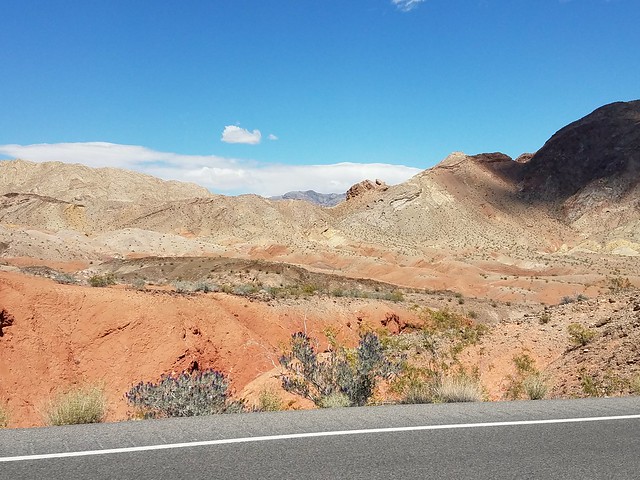 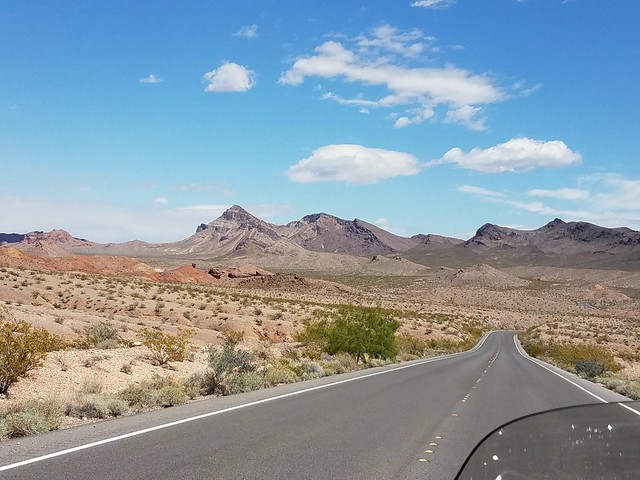 Our goal was to visit Valley of Fire State Park, south of Overton, to do some hiking.  But rain clouds to the north made us change our plans and stop at Redstone Trailhead,  a small area of red rocks with a paved parking area and picnic area (with toilets). 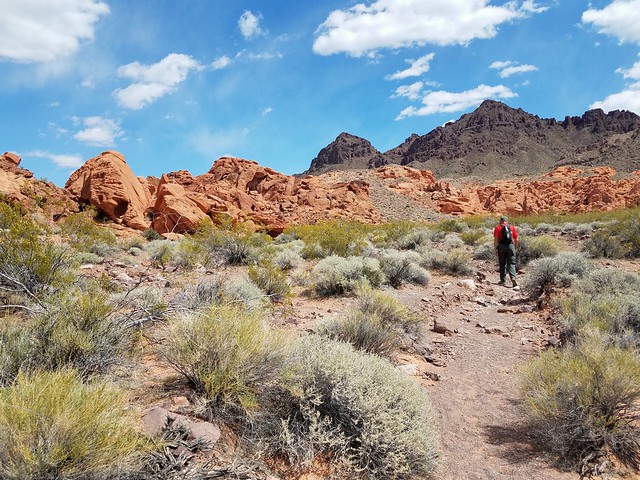 We hiked the half mile loop trail that goes around a major formation of red sandstone. 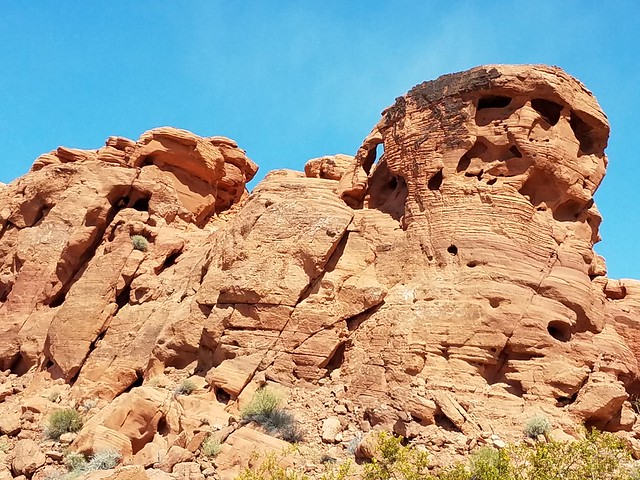 Looking west from the trail 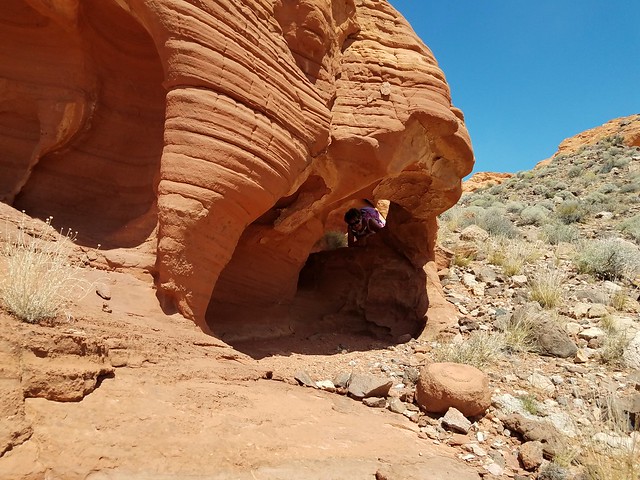 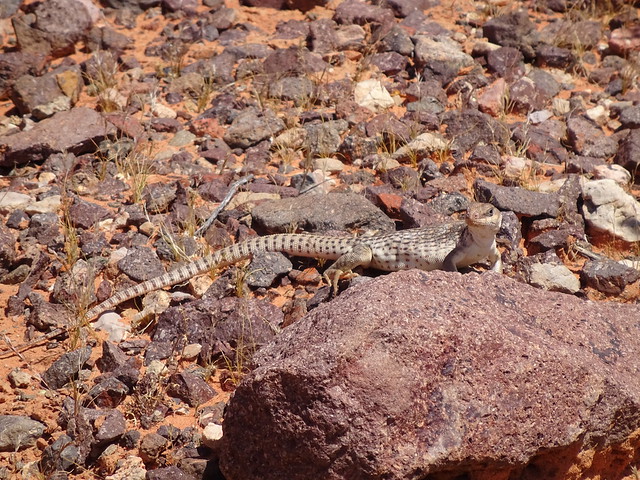 A little wildlife along the trail 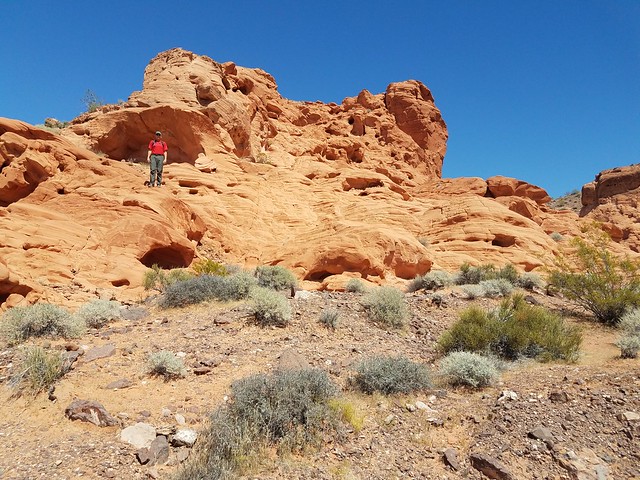 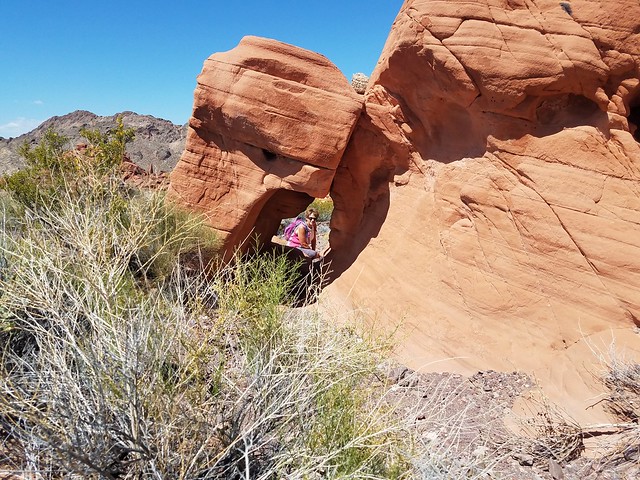 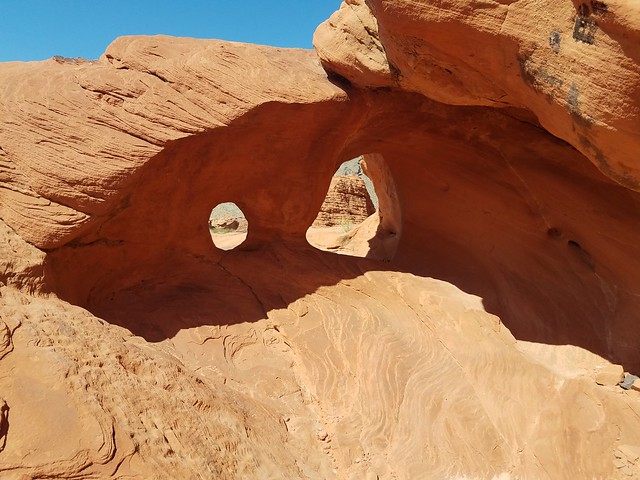 Friends, Steve and Joan (FOSJ), are nearing the end of their volunteer assignment at nearby Lake Mead National Recreation Area.  Since they also have a motorcycle, we contacted them and arranged a ride up the same roads on Sunday, this time continuing all the way north to Overton for breakfast. 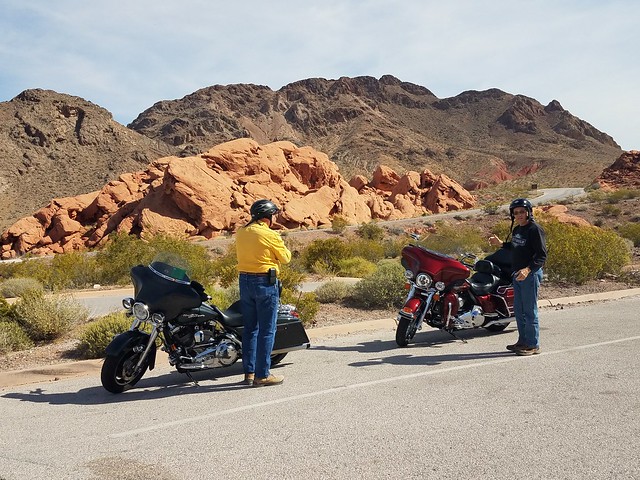 We took a short break at Redstone, where we had hiked two days earlier

Although we had ridden this route just two days earlier, the scenery is so stunning you could drive it every day and see something new every trip. 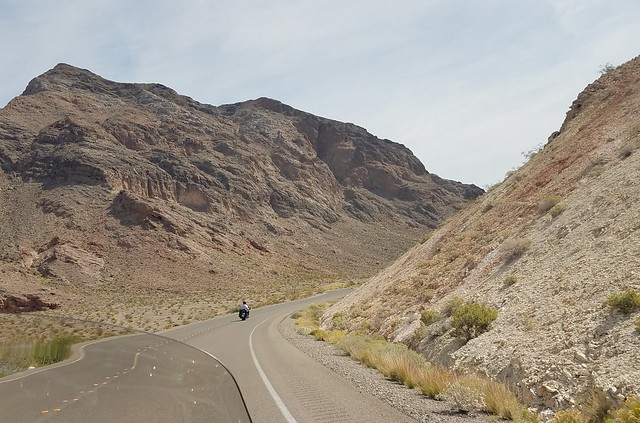 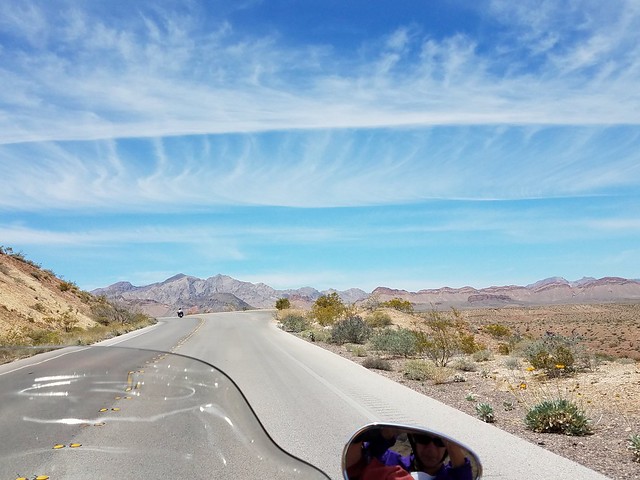 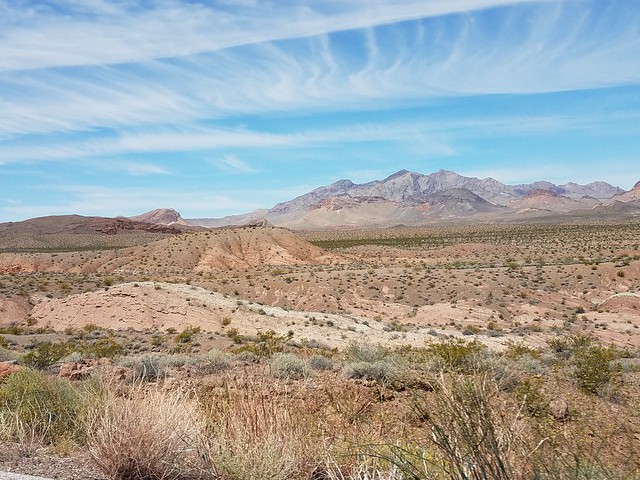 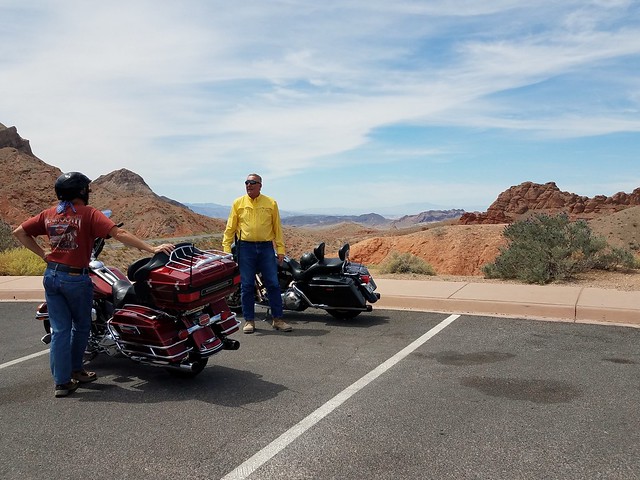 After a couple of days riding our new toy it was time to get some work completed.  The motorhome was in need of some cleaning, as it had not been washed since January.  With no significant rain since then the dust was building up.  Then we had driven on some wet roads leaving Bluff, which always sprays dirt all over the sides.  The roof over our RV space is not quite high enough to comfortably wash the roof of the RV (unless you enjoy crawling on hands and knees) so we pulled the motorhome out to the street so John could get up there with the hose. 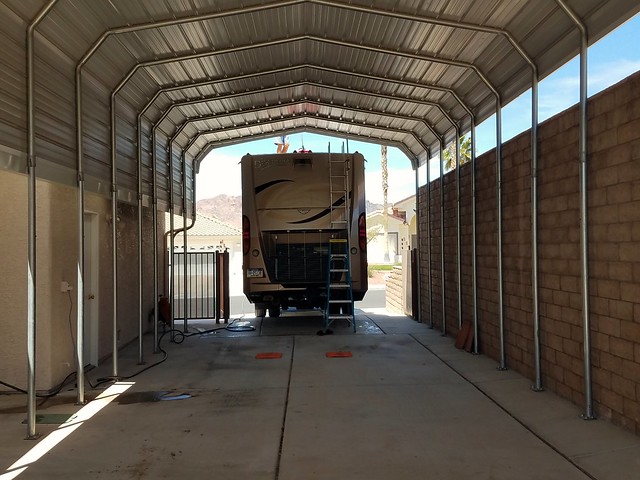 With the front wheels at the curb the back is still just under the cover, so a little crawling is needed to get up on top. 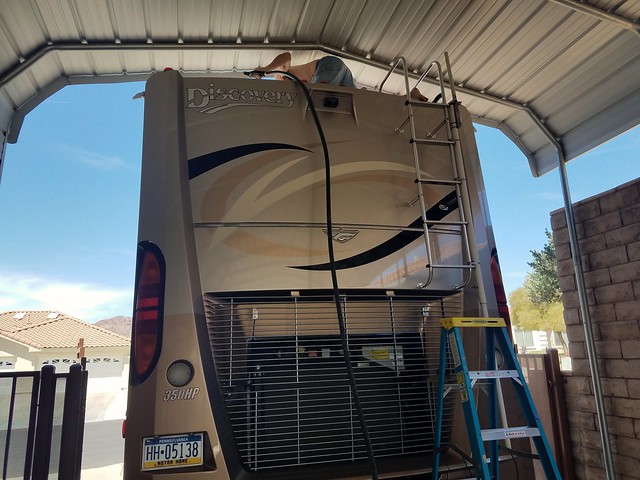 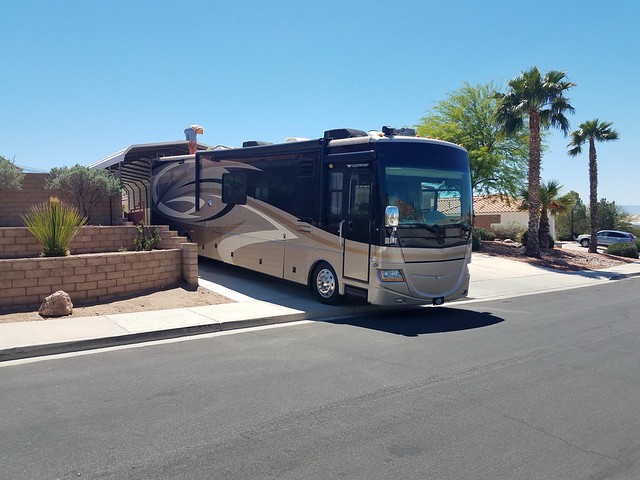 Once the roof was washed, we put the motorhome back under the roof so John could wash the rest of it out of the bright sunlight.  Some extensive cleaning is now on the schedule as we prepare for our upcoming summer travels.

But until then we will still find time to explore the area, with some hiking and biking on the agenda.  More on that later . . .

39 Responses to Enjoying a New Ride