After a week in Hurricane, UT we returned to Boulder City last Sunday to finish up with the purchase of our new home.  We signed the  final closing documents on Monday, then waited the required three days before closing on Thursday.  We met the sellers at the house before closing so they could give us information on all the nuances of the house.  We found them to be wonderful people who are very proud of their home and expressed relief that we appeared to be decent people who will continue to care for it properly.  Boy, did they misread us!  They will be staying in the house until the beginning of next week to finish moving some of their things and supervise a person they hired to do a final cleaning (although the place looks spotless to us).  We’re heading for Bluff, UT on Sunday anyway, so we told them they didn’t need to rush their departure (they have a townhouse in Huntington Beach, CA).

Jodie and Bill (On the Road Abode) had arrived in this park (Canyon Trails RV) before we left for Hurricane last week and were still here when we returned (they left on Thursday).  They told us about a nice Jeep ride they had taken recently on the south side of Lake Mead about 20 miles into Arizona.  We decided to call friends Steve and Joan (Friends of Steve and Joan) to see if they wanted to make the trip there with us.  Steve and Joan are volunteering at nearby Lake Mead National Recreation Area.  Their main assignment is to travel the many back roads in the area to check for damage, fix fallen signs, and monitor conditions.  They’ve been on just about every road in the recreation area so we knew they would be familiar with the route.  Sure enough, they had driven the roads numerous times in a park vehicle, but were more than up for another visit in their Jeep.  So we rendezvoused along US 93 at Nevada Way at the crack of dawn (ok, 9:30) Friday morning and headed into Arizona.  Near mile marker 19 we turned left (east) on to Temple Bar Road.  After 13.5 miles, the paved Temple Bar Road makes a 90 degree turn to the right.  We continued straight on to the maintained dirt road labeled 74 on park maps. 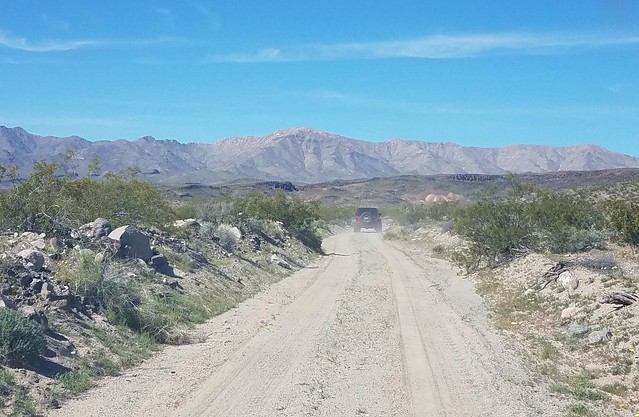 As we traveled on Park Road 74 we could see a section of Lake Mead in the distance.  The contrast of the mountains and the water always looks beautiful.

After four miles we came to a cross roads where we turned left (west) on to Park Road 71 (Cohenour Loop Rd. on Google Maps).   We stopped along the way to check out some ancient artwork. 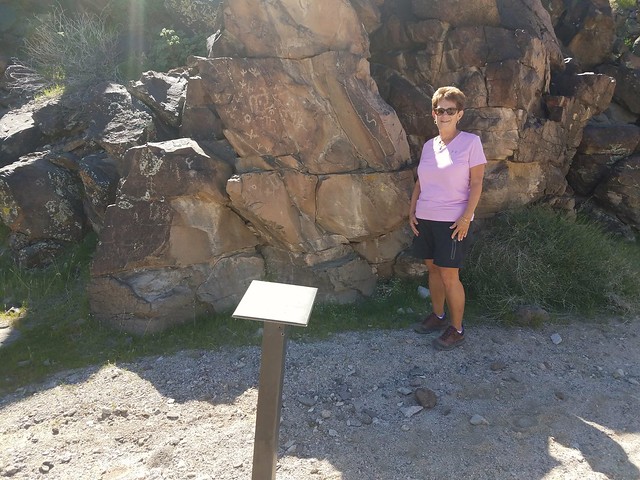 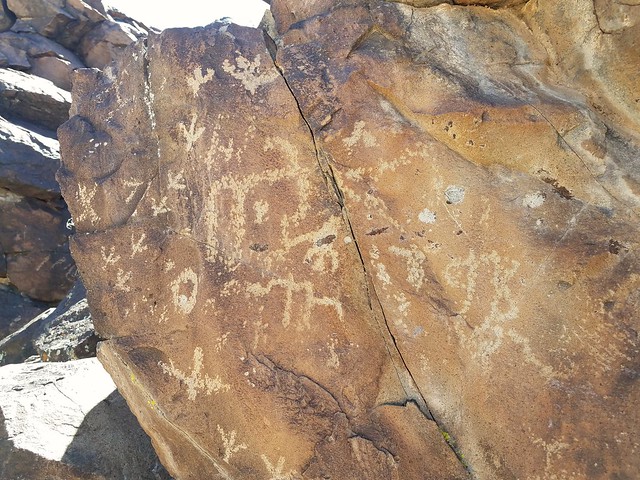 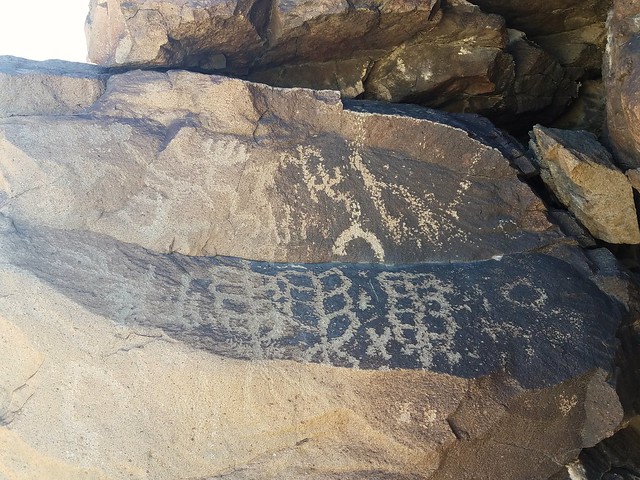 Just up the road from the artwork we came to our first wildlife sighting. 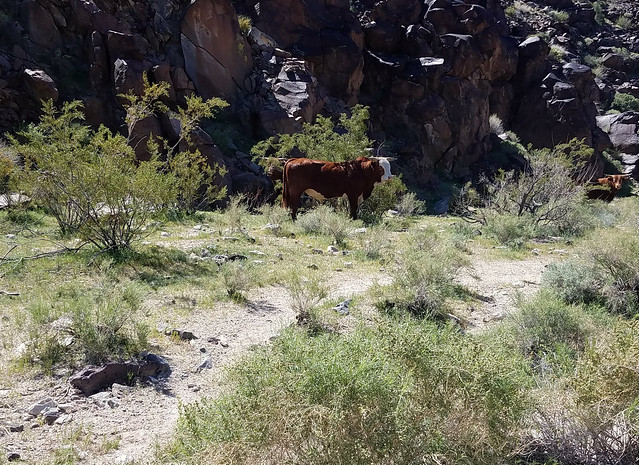 A group of three cows were enjoying lunch by the road.  The animals had no markings so Joan said they were probably wild.  Just a short distance further, Pam spotted a black animal moving off to our right.  We radioed ahead that we though it was a horse.  Joan said they had never seen a wild horse in the park, but it could be a wild burro. 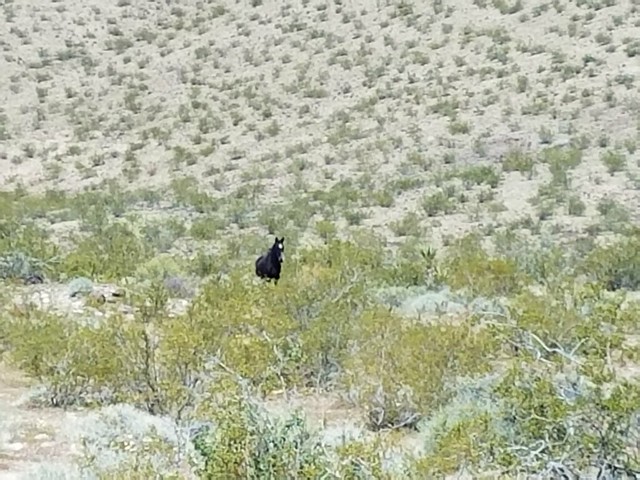 But a closer look revealed that it was, indeed, a horse.  He had no markings but looked very healthy.  Steve later reported both sightings to his supervisor at Lake Mead NRA. 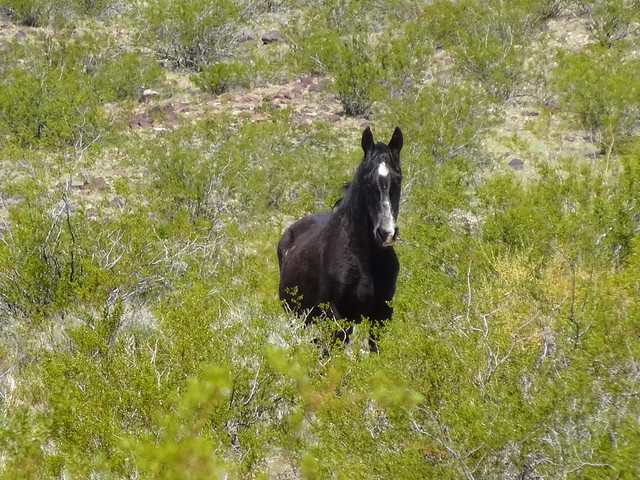 We continued driving up the loop road, stopping frequently to enjoy the scenery. 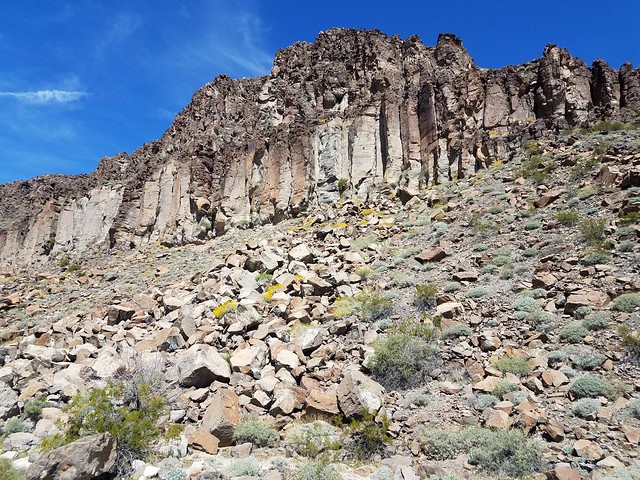 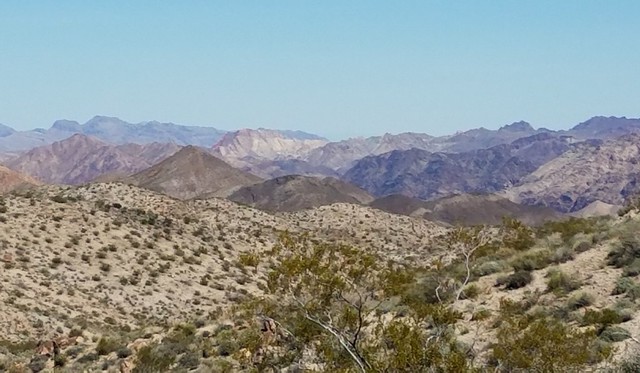 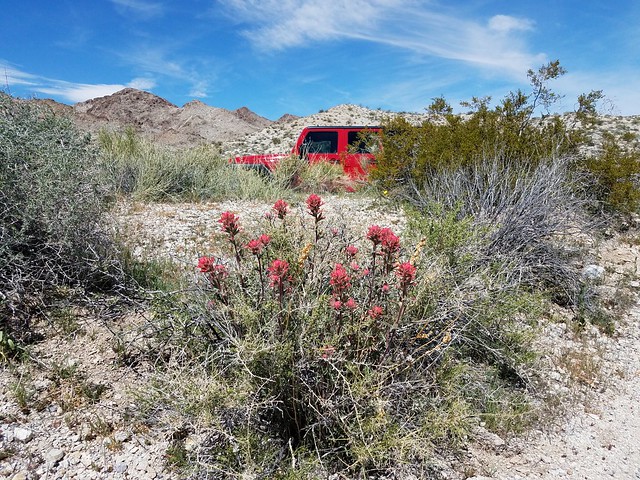 Steve and Joan try to sneak past us after a switchback

About half way around the loop we turned left on to Park Road 72, a short, dead end spur that leads up to a crest near an old mine.  At the end of the road we were treated to an outstanding view of Lake Mead below us and the skyline of Las Vegas in the distance. 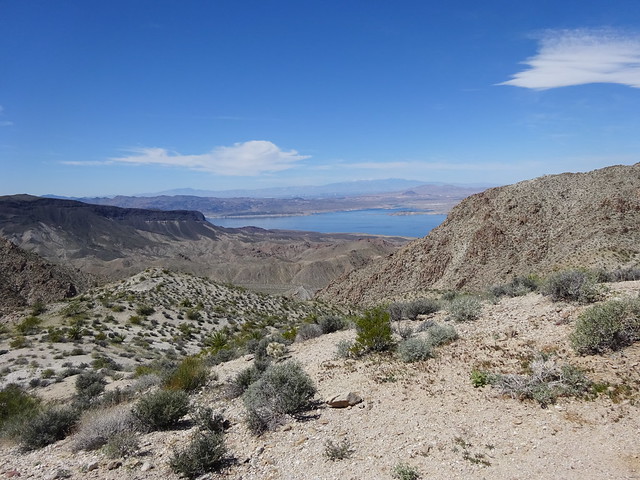 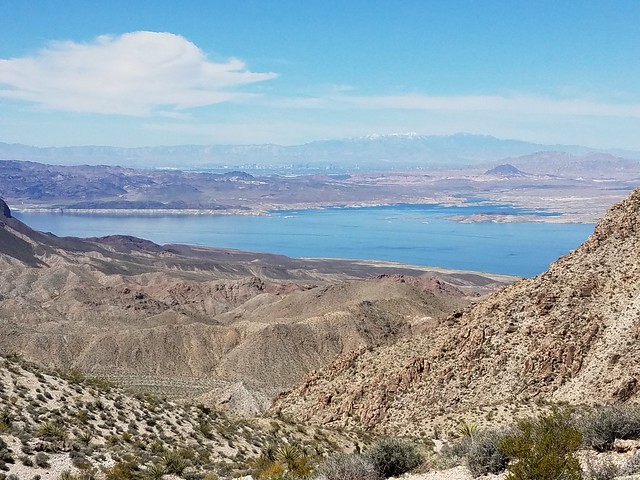 We returned back down to the loop road, enjoying the views all around us as we descended. 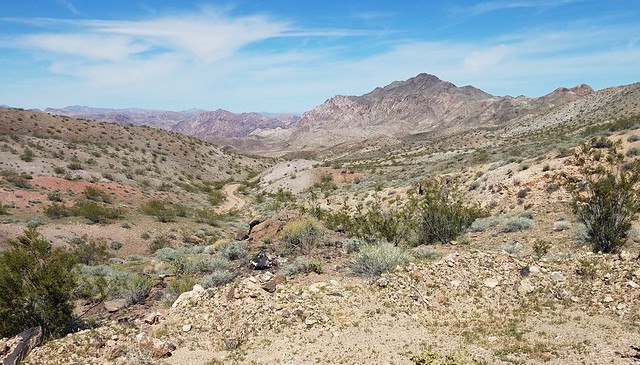 As we returned past the area with the art work, one of the sentinels kept an eye on us. 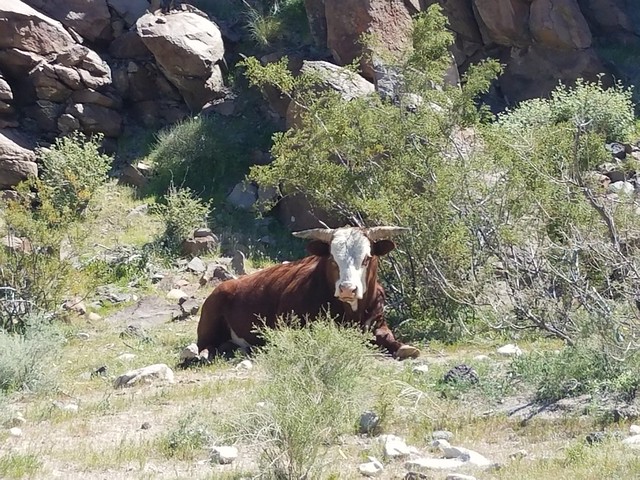 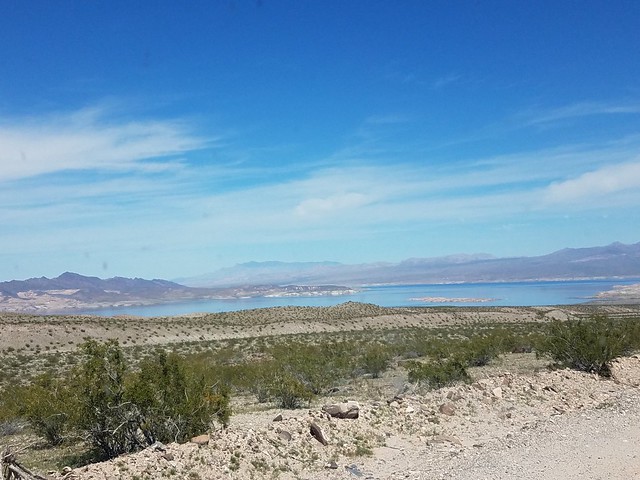 One last view of Lake Mead

Tomorrow (Sunday) we’ll head out very early because we have a long drive ahead of us.  Our next destination in Bluff, UT is really a two day drive for us, as we don’t like to drive further that 200 miles in one day.  But there isn’t a real convenient spot to stop along the way so we decided to just tough it out and make the 440 mile journey in one day.  Someone once said that only the strong survive.  We’ll see if that’s true tomorrow!