Gold Mine Tour and a Jeep Ride

While much of our time the past two weeks has been spent dealing with our purchase of a house here in Boulder City, we have managed to get out and have some fun.  One afternoon involved a drive to the south to visit an old gold mine and explore some Jeep roads.  Our friends Steve and Joan (FOSJ) have spent the past few months volunteering at nearby Lake Mead National Recreation Area.  This is at least the fifth winter they have worked here as road monitors, which means they drive a park service vehicle over many of the remote roads around Lake Mead to check for conditions that need attention.  This gives them unique knowledge about where to find the most interesting locations.  For this adventure we were joined in our Jeep by Dave and Sue (Beluga’s Excellent Adventures) as we followed Steve and Joan in their Jeep.  The group headed south on nearby US 95 for ten miles, where we turned east on NV 165.  After 13 miles on that paved road we came to the Nelson Ghost Town, home of the Eldorado Mine Tour. 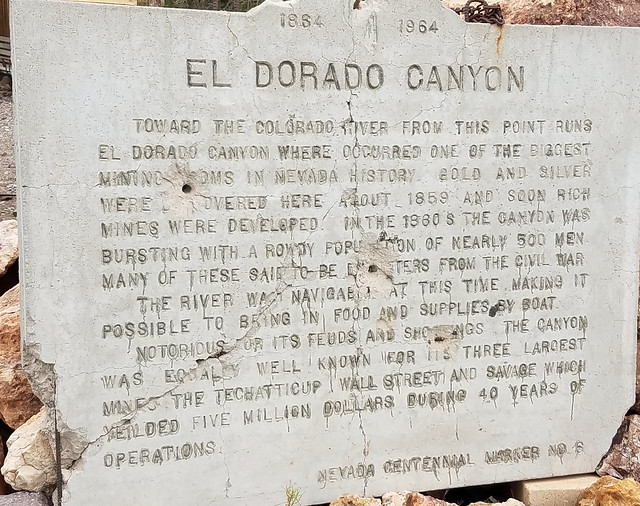 The area known as Nelson was originally called Eldorado by the Spaniards, who made the original discovery of gold in the area that is now Eldorado Canyon.  The town was the site of one of the first major gold strikes in Nevada and one of the biggest mining booms in state history.  Gold and silver were discovered here around 1859.  The rush to the canyon began in 1861 when several mining camps were established in the canyon along with a steamboat landing at the mouth of the canyon on the Colorado River called Colorado City.

In its heyday, the area established a reputation for being rough and lawless.  During the Civil War, deserters from both armies would wander there, hoping that such an isolated location would be the last place military authorities would look for them. 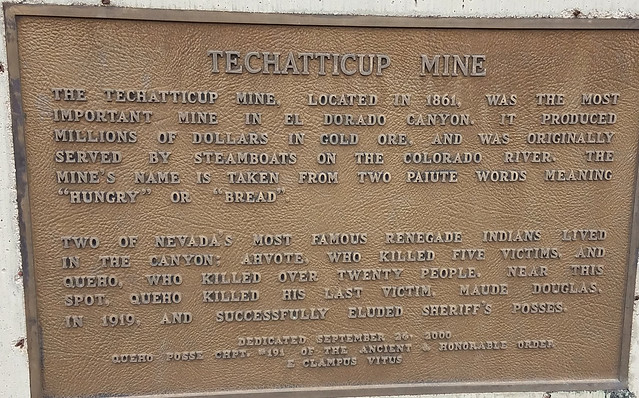 Among the early mines established was the Techatticup Mine in the middle of the canyon. Disagreements over ownership, management, and labor disputes resulted in wanton killings so frequent as to be routine and ordinary.  Despite the reputation of the mine, it along with others in the town produced several million dollars in gold, silver, copper and lead.  The mines in the canyon were active from about 1858 until 1945. 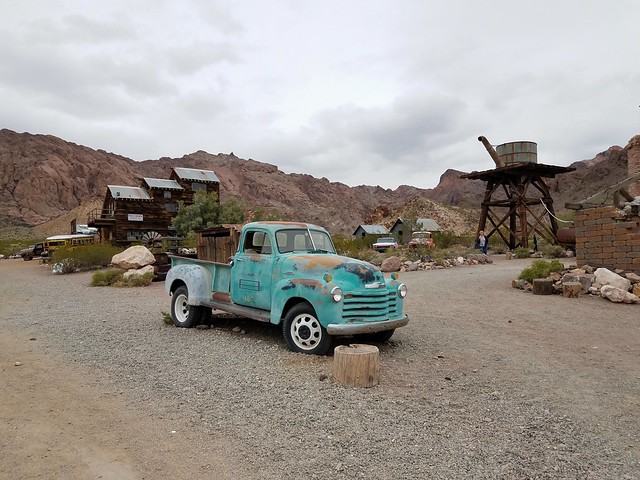 The current owners of the mine and the land around it are “collectors.”  The property is covered with old vehicles, while the main building is filled with a variety of “vintage” items. 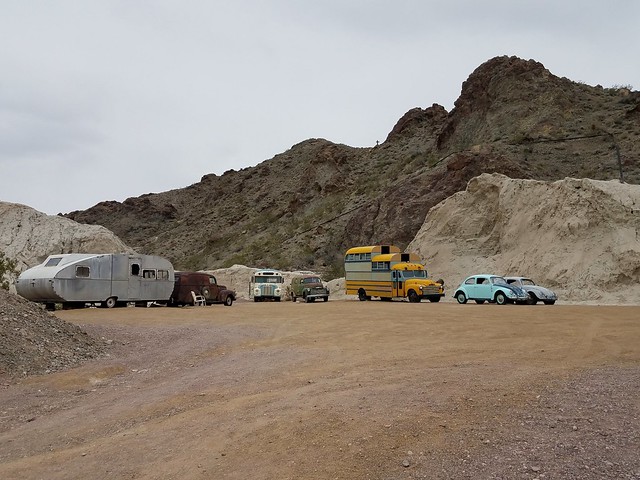 One oddity near the mine entrance is the tail and wings of an old airplane.  A 2001 Kevin Costner movie,  3000 Miles to Graceland, was shot here.  In one of the scenes an airplane is blown up, but the explosion failed to totally destroy it.  They placed the remains on a pole stuck in the ground, giving the impression that the plane crashed head first right there. 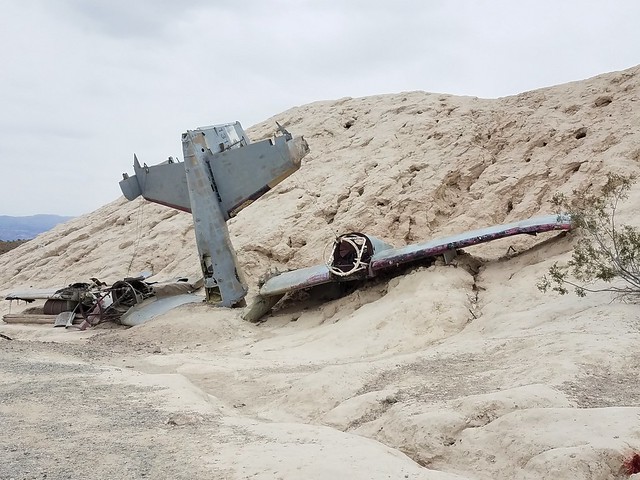 After paying our admission fee, $15 a person, we joined a small tour group and headed for the mine entrance.  Our guide was a bit rough around the edges but he was knowledgeable and had a good sense of humor. 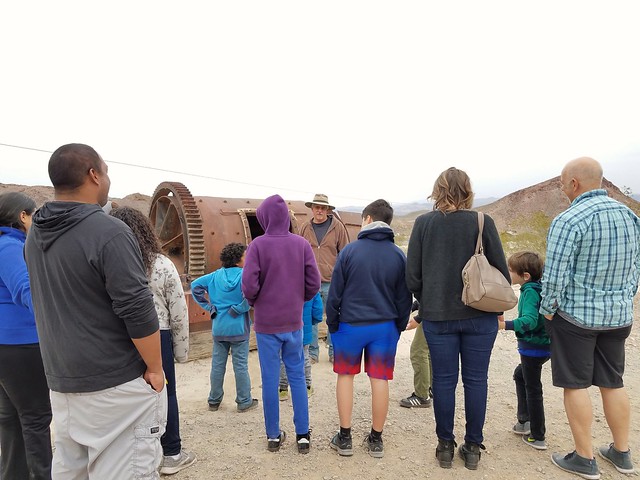 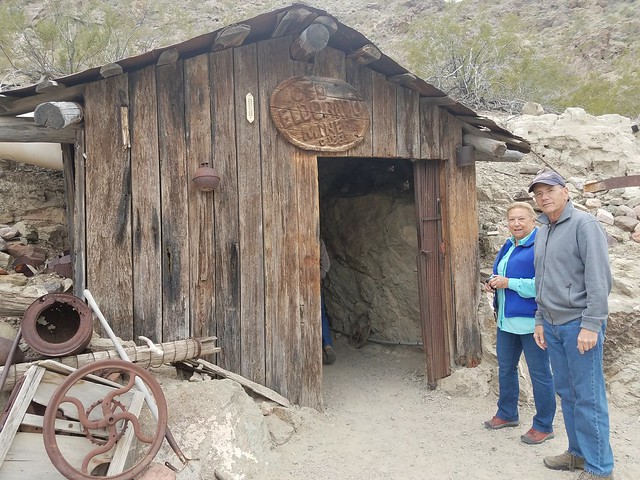 John and Sue at the mine entrance 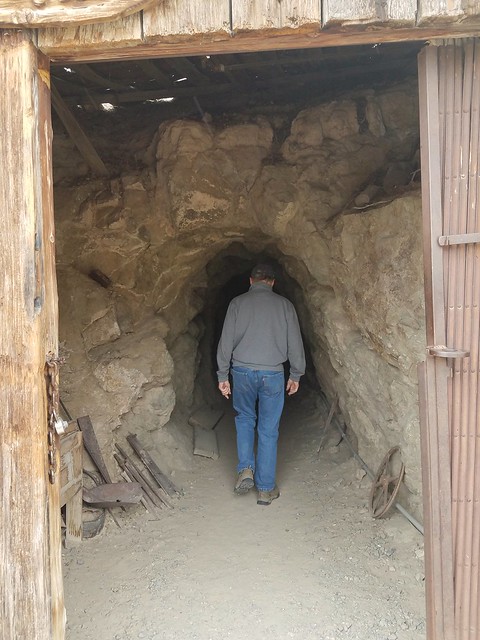 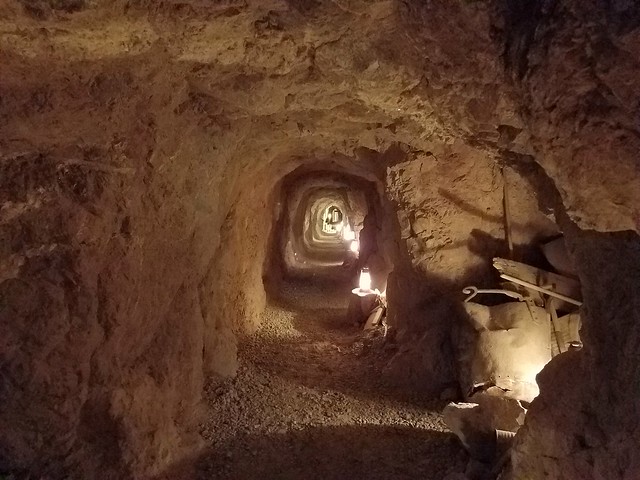 The tunnel is nicely lit up 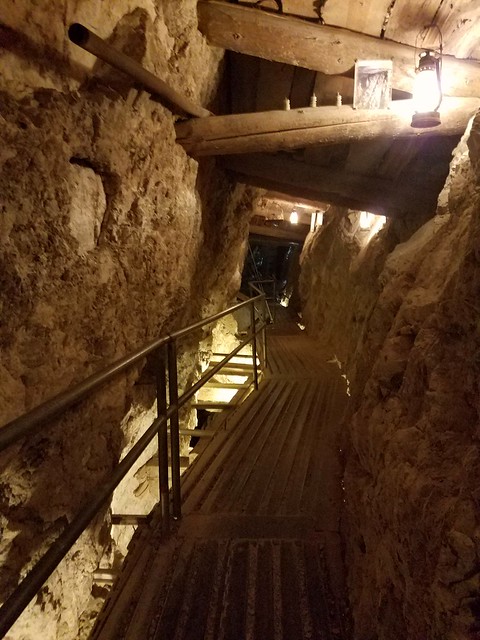 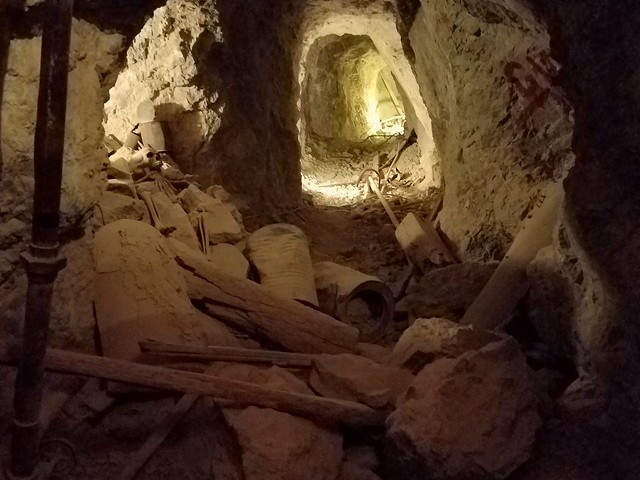 After the tour we loaded up in the two Jeeps and continued east on the paved road as it descended down to the Colorado River. 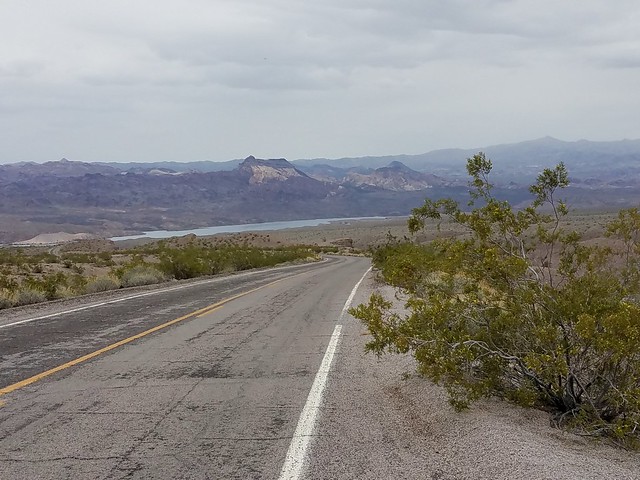 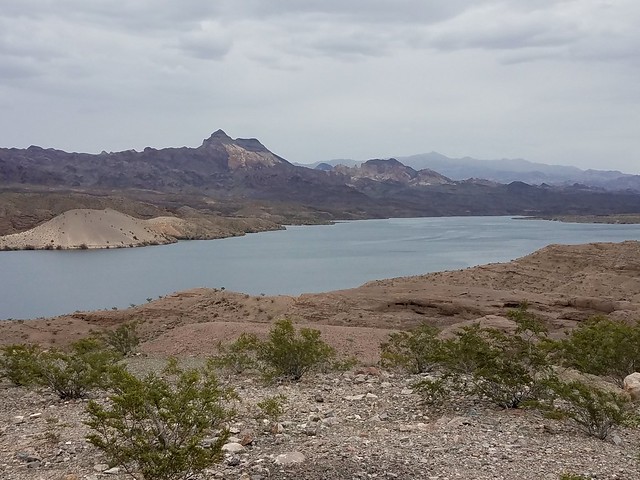 Near the river we left the paved road and turned back to the west on a Jeep road that  wound its way up into the hills. 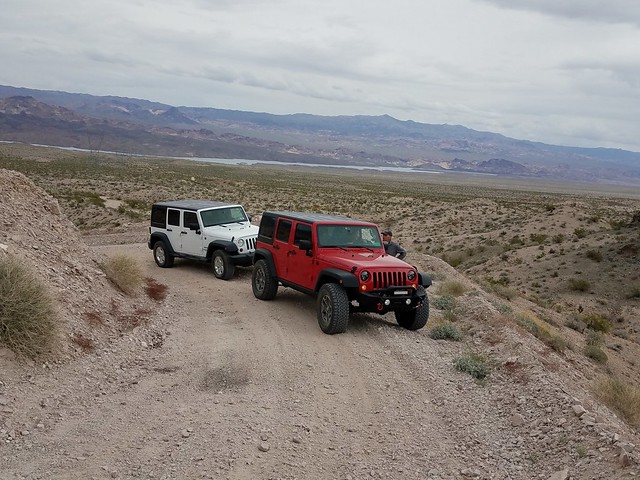 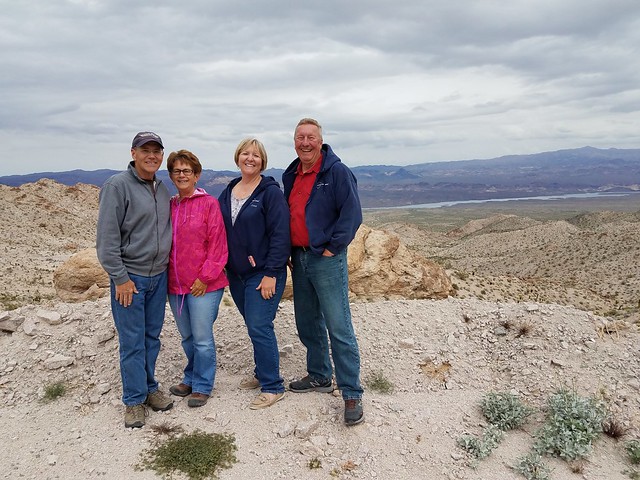 The road meandered up and down a series of hills.  At times Steve and Joan were driving below us . . . 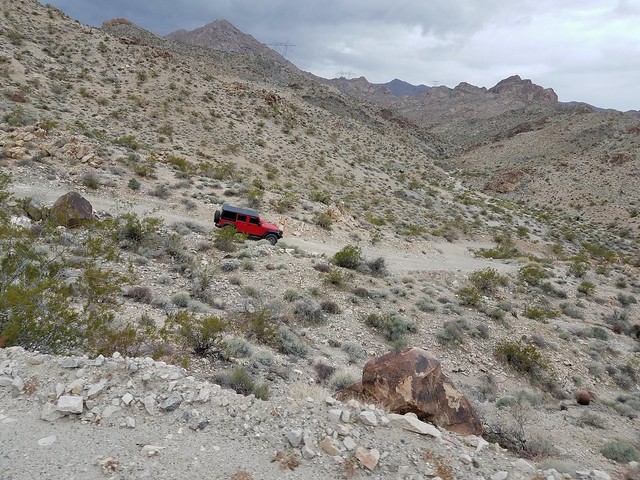 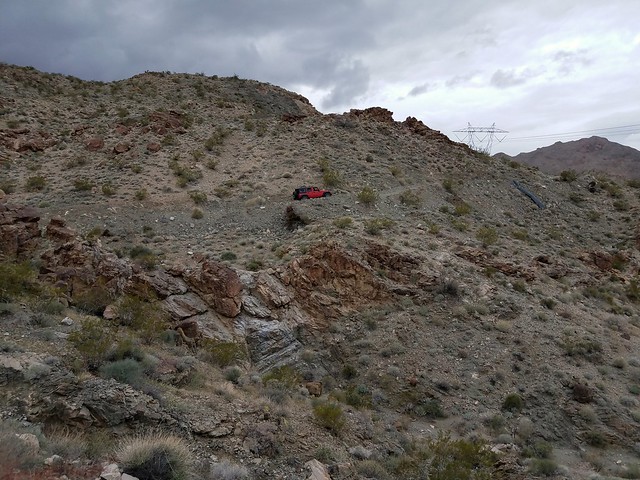 When we reached the highest point in the drive, we looked back to the east and could see the road winding below us with the Colorado River in the distance. 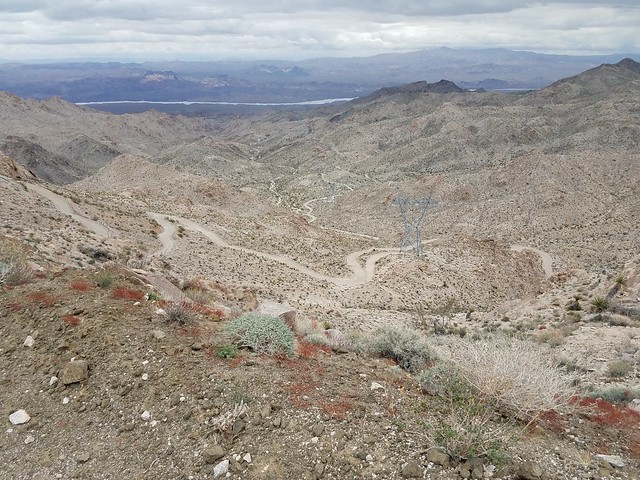 As we rounded a curve, Joan’s sharp eyes spotted this group of onlookers checking us out. 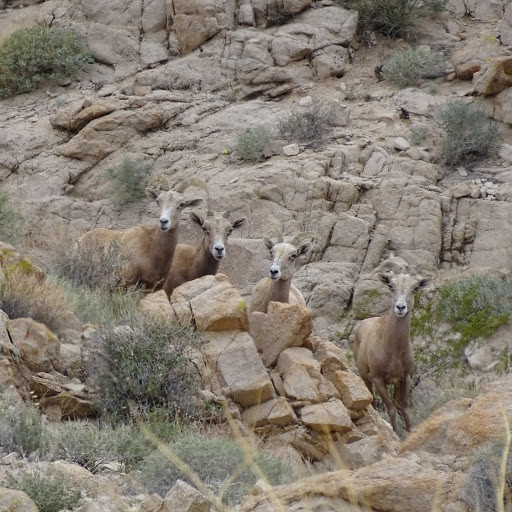 The landscape changed often as we made our way through the mountains.  At one point we passed an area thick with Teddy Bear Cholla. 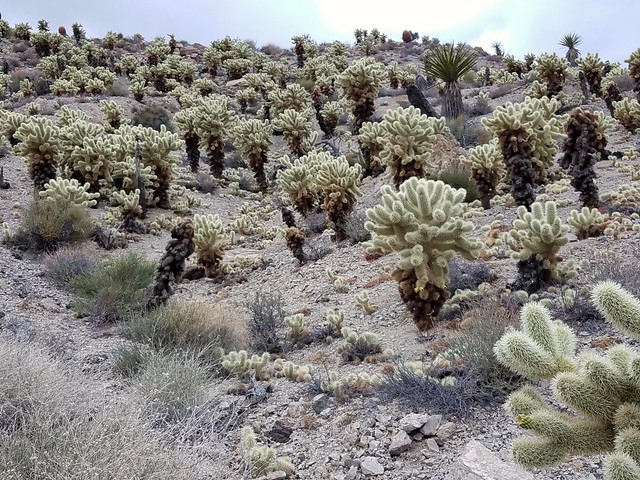 In a short distance the Cholla disappeared as we went through an area of rounded sandstone. 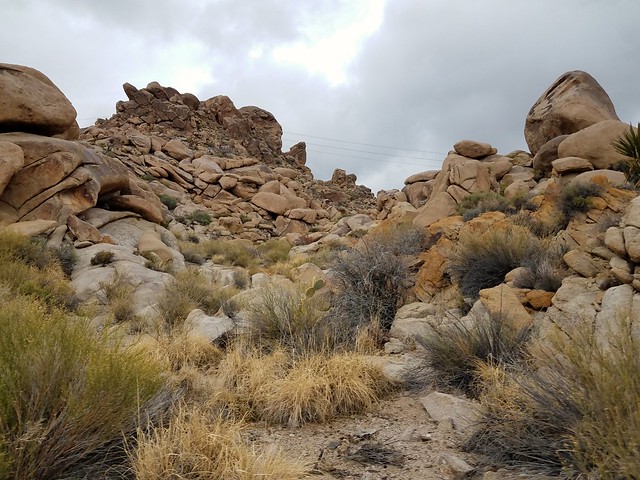 We ended a great day with a nice meal at a Mexican restaurant in Boulder City.

After finishing all the paperwork necessary to the purchase of our new home, we now head north into Utah for a week long stay in a state park outside Hurricane, just north of St. George.  We had originally planned to follow that with a trip to Page, AZ, along the shore of Lake Powell, but have changed our plans.  Next week we’ll return to Boulder City for final settlement on the house.

But before that we have some adventures scheduled during our stay here in Hurricane.  More on that later . . .

14 Responses to Gold Mine Tour and a Jeep Ride