A Small Purchase in Nevada

We left Tucson on March 3rd and drove north heading to Boulder City, NV, located just a bit southeast of Las Vegas.  The trip is much too far for us to do in one day so we stopped for a night at North Ranch, an Escapees RV Club park just north of Wickenburg, AZ. 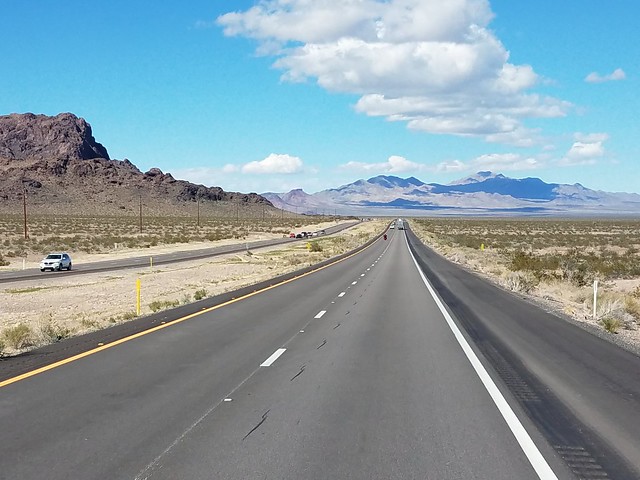 US 93 just north of Wickenburg, AZ

The ride from Wickenburg to Boulder City is beautiful, as you drive through a combination of flat desert and mountain.  But as you approach the bridge over the Colorado River next to the Hoover Dam things get really interesting. 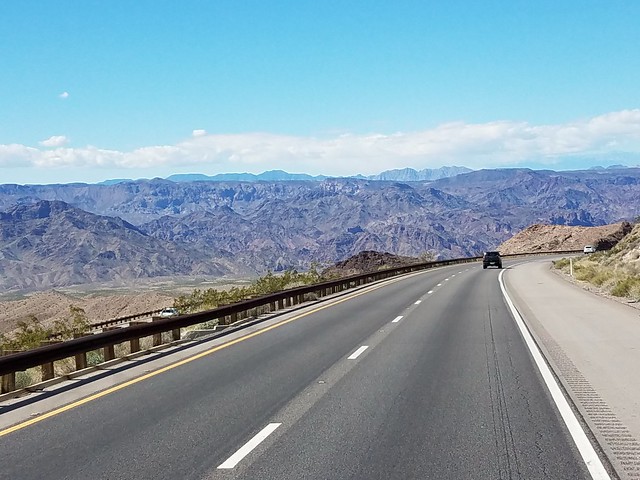 The Colorado River flows through those mountains 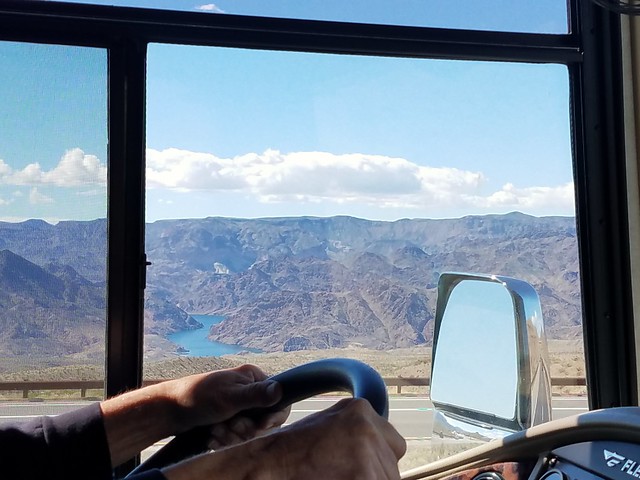 A brief view of the river 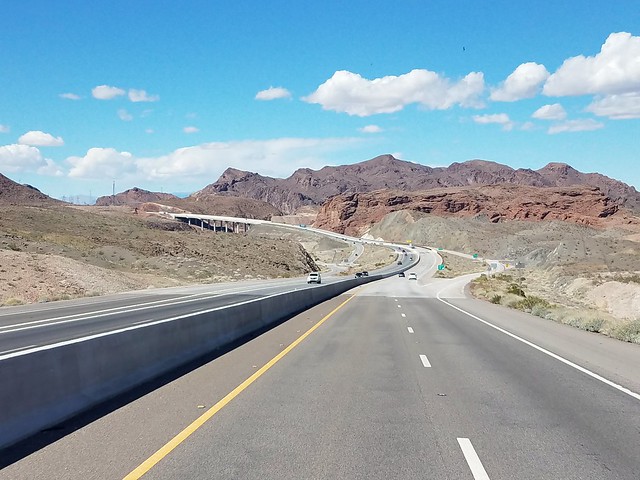 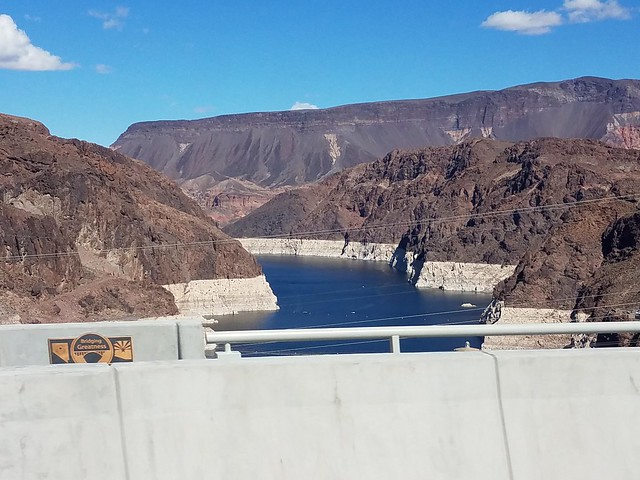 Crossing the Colorado. The water is Lake Mead, with Hoover Dam just out of sight below the railing

Once over the river you go up a long hill with Lake Mead just behind you. 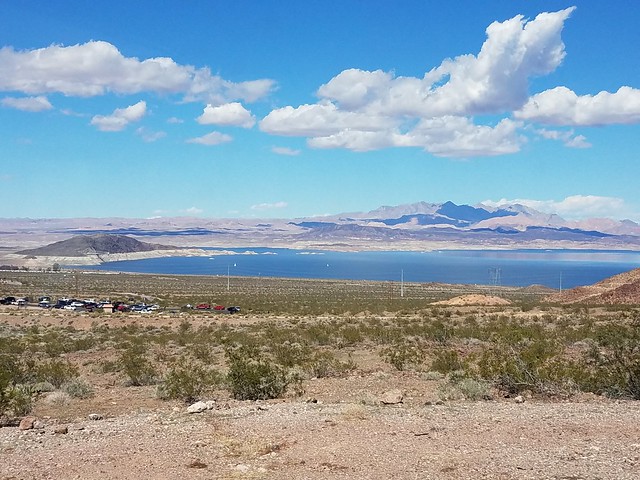 At the top of that hill is the small town of Boulder City. 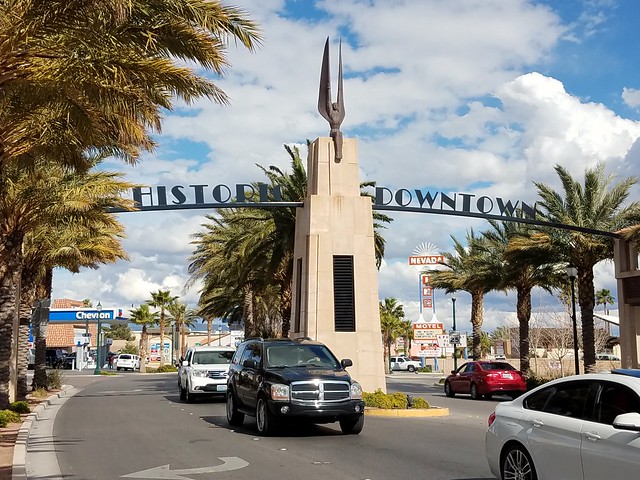 While we have stayed in Boulder City a couple of times during our travels, this visit was for a very specific purpose.  Everyone who is a full-time RVer (living in it year round) knows that one can’t do this forever.  So as you travel around you are always looking for a place where you might want to settle in the future.  As we walked through the small downtown area of Boulder City during our last stay here in October, John remarked that he felt really comfortable here.  Pam replied that she had been thinking the same thing.  Hmm, maybe this is the spot!  The weather is great, although a bit warm in the summer (but without the humidity we grew up in).  The town is near enough to the Las Vegas area that you can easily drive there for shopping and entertainment, but 25 miles and a mountain range keep the hustle and bustle of that area away (so does a law banning gambling).  The area is filled with great hiking trails (and Jeep roads) for us to explore.  Also, we’ve been getting the urge to return to a hobby from our pre-motorhome life, motorcycle trips.  For years we owned a touring bike and spent many weekends and vacations traveling on it.  We towed the bike on a trailer for the first two years of our full-time life but sold it once we found a love for hiking.  But the urge is back, and Boulder City is ideally located for long scenic trips in all directions.

So we spent some time during that visit touring the various residential areas in town to see if anything caught our eye.  While nothing jumped out at us during that visit, we continued to think about settling there.  Once we determined that it was an ideal location for us we decided to return in March to do some serious house searching.  In the intervening months we constantly monitored various real estate web sites for potential houses.  Since we did not see a single listing that fit our criteria, we thought that we may have to purchase a piece of land and build something that fit our needs.

After arriving in Boulder City late on a Sunday afternoon we headed to a realtor office Monday morning.  At Desert Sun Realty we met an agent named Shana who understood our needs perfectly (she and her family also own a motorhome).  She said that building lots were very limited in Boulder City as were existing houses that fit our requirements. But . . . .

Over the weekend she was told of a house to be listed by Desert Sun Realty that afternoon.  She said it appeared to fit our needs and strongly suggested that we take a look, as once it hit the web sites it may not last too long.  While we knew little about it (no pictures were available), we decided to take a look.  We drove over, took one look at the front of the house, and knew this could be the one.  Quickly returning to the realtor office we told Shana that we were very interested.  Fifteen minutes later we met her at the house and took a tour.  The more we looked, the more excited we became.  The house checked every box we had in our list of wants and needs, including a large covered area for the motorhome! 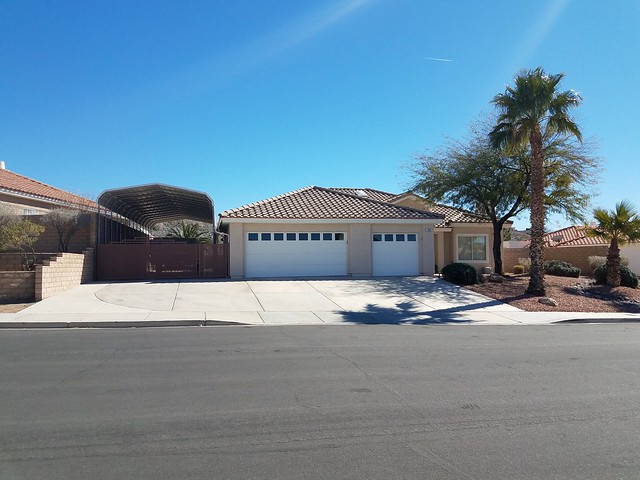 Since we had already done all our homework on this move, and this house had everything we wanted, we decided to make an offer on it.  After more questions to Shana we found the house was owned by a couple about our age who lived in California and only used this house as  a second home.  Hmm, what are they going to do with all the furnishings?  Shana quickly called her boss (who is the listing agent) to see if they would be interested in a deal for the house and everything in it.  Remember, we sold everything before going full-time and have zero furnishings.  Her boss felt they may be interested in that, so we raised our offer to include the furnishings.

Shana returned to the office to draw up a draft of our offer while we paid a visit to a local financial institution to secure financing.  Boulder City is a small town where everyone knows each other and things are less complicated than in other areas, so by the end of business that day we had a loan secured and an offer on the table.  Just after noon the next day our offer was accepted!  Wow, 25 hours and we had a home! 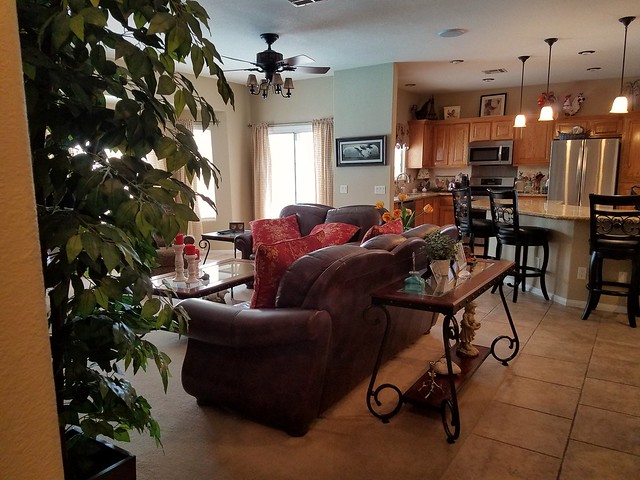 We were not really interested in having a pool, but there is one on the property so we will have to live with it (such stress).  There is also a small putting green that someone already has her eye on to replace with a cactus garden (we’ll see what happens). 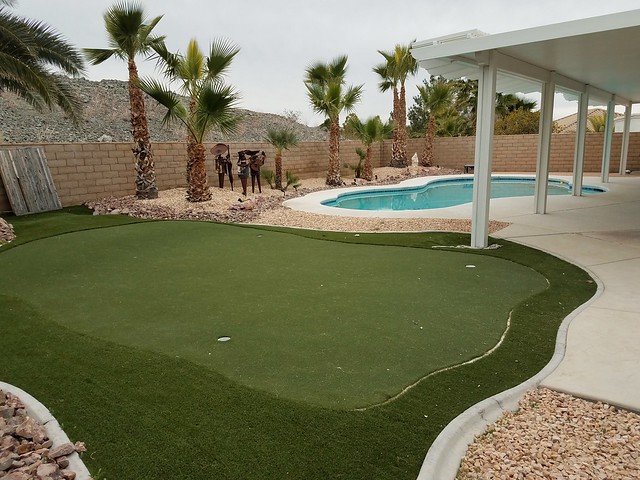 Part of the sales agreement required the sellers to provide us with a list of items they would be removing before they left.  We received the list and were astounded to find they would only be taking a few small personal items.  We will now be able to literally walk in and live there without purchasing anything!  Of course, there are some items that do not fit our style, but we can deal with them later.  For now we can move in without a problem.

Closing will be some time during the last week of March.  But we have reservations in Utah for return visits to Bluff and Moab for the month of April so it will be the first of May before we move in.  Then it’s back on the road with the motorhome for a trip east during June, July, and August.  After that we’ll return some time in the fall for a more extended stay.  But we are far from finished traveling in the motorhome, which is why we wanted to have it parked on the property.  We’ll keep it in traveling condition and plan to still spend a good part of the year in it.

70 Responses to A Small Purchase in Nevada