Climbing to the “A” and Hiking the Cat Mountain/Explorer Trail

As you drive along Interstate 10 through Tucson, if you look to the west, there is a large hill (or small mountain) with a white capital letter “A” near the top.  The hill is called Sentinel Peak and the “A” is representative of the University of Arizona, located near downtown Tucson. 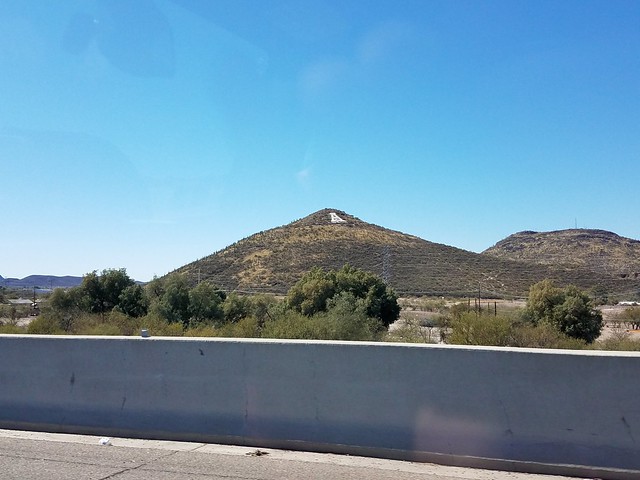 In the very early days of Tucson, an Indian fortification was constructed at the top of a small mountain that would come to be called Sentinel Peak—also sometimes referred to as Picket Post Butte.  This Indian fortification in time became known as the sentinel station because a sentinel or guard was posted there to watch for approaching enemies, likely Apache Indians.  During the Civil War, armed military guards were posted at the sentinel station and a canvas was stretched across the stone fortification, to keep the sun from hitting directly on the men posted there. 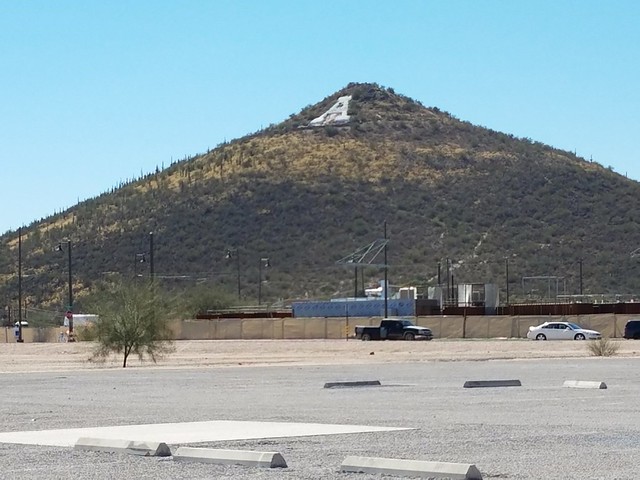 After Arizona football’s 7–6 victory over Pomona in 1914, a civil engineering student on the team convinced one of his professors to make a class project of the survey and design for a huge block “A” on Sentinel Peak.  Students finished the project in March of 1916, when the 70 ft. wide, 160 ft.  high “A” was whitewashed. The basalt rock used in construction of the “A” was hauled from a quarry at the mountain’s base which supplied stone for many foundations and walls throughout Tucson, including the wall surrounding the University of Arizona campus. 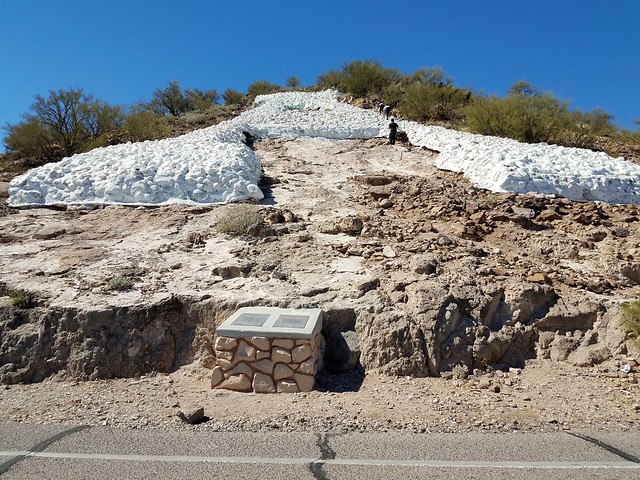 A paved road leads up to a parking area just below the base of Sentinel Peak.  From there it is a short hike to the top, with the “A” just below the peak. 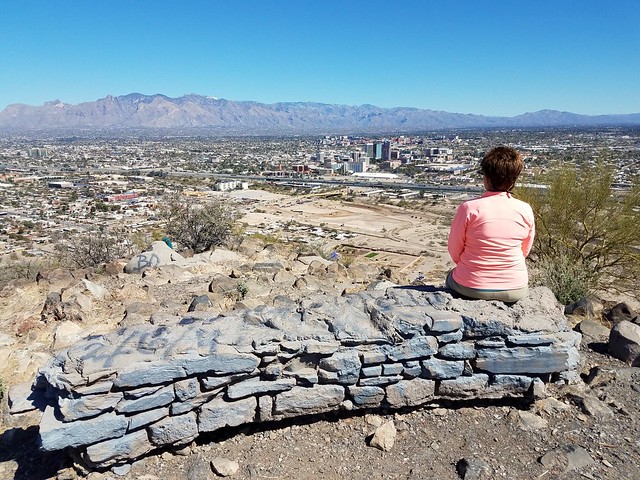 Downtown Tucson below, with the Catalina Mountains in the distance 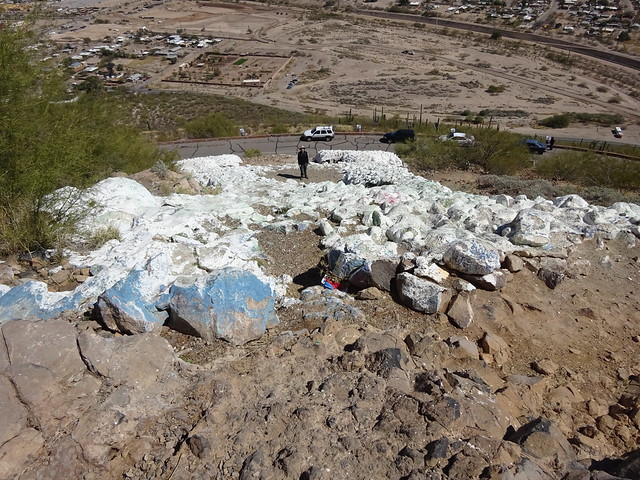 Looking down at John standing between the legs of the “A” 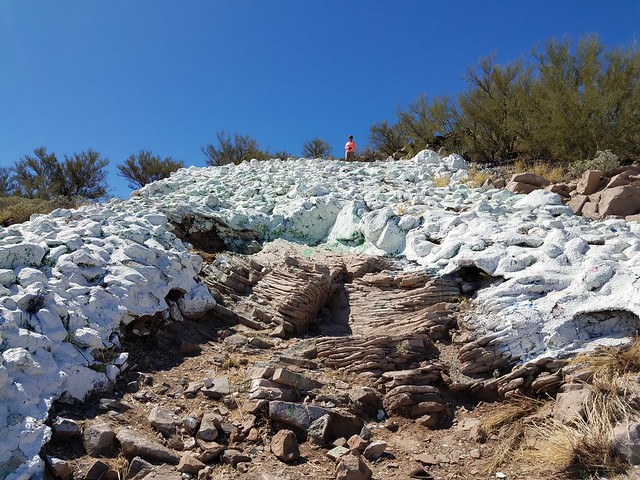 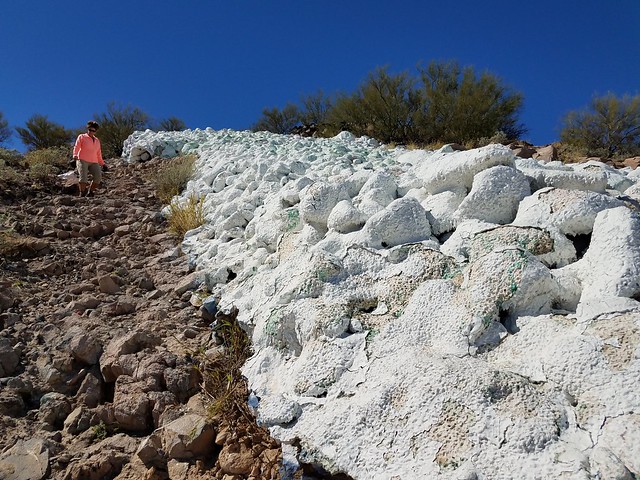 There are many strange saguaros on the peak (strange even by saguaro standards).  We spotted one crested saguaro along the road about half way to the top. 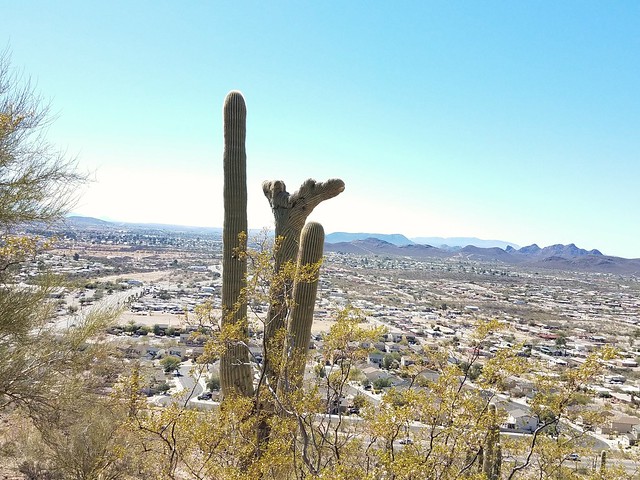 But along the east side many of the saguaros were very different than the thousands we have seen in our numerous visits to the area. 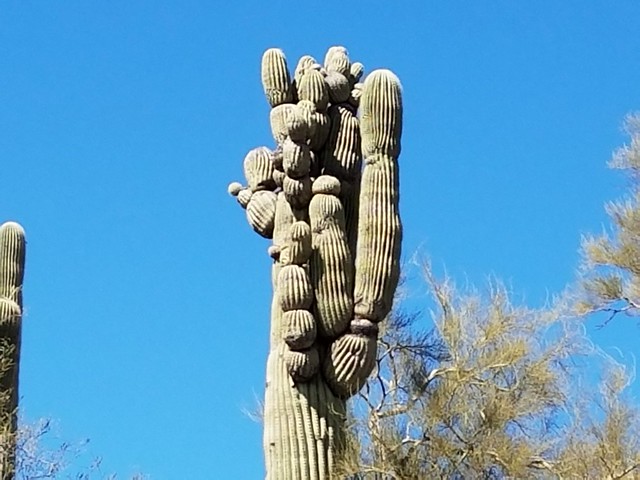 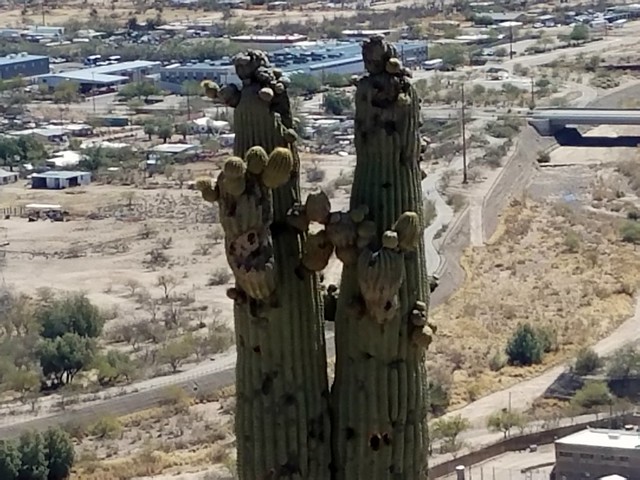 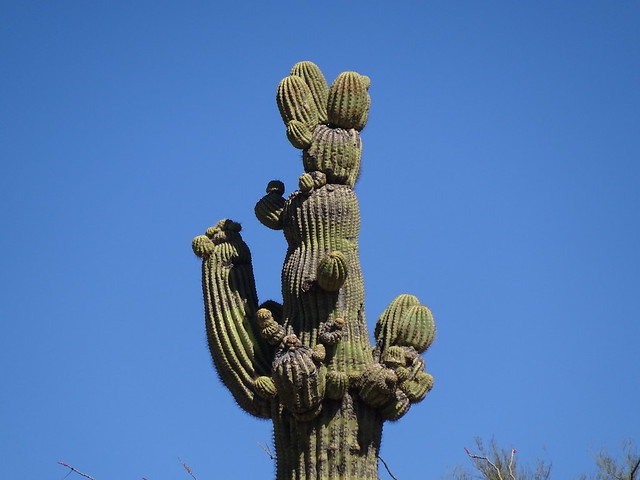 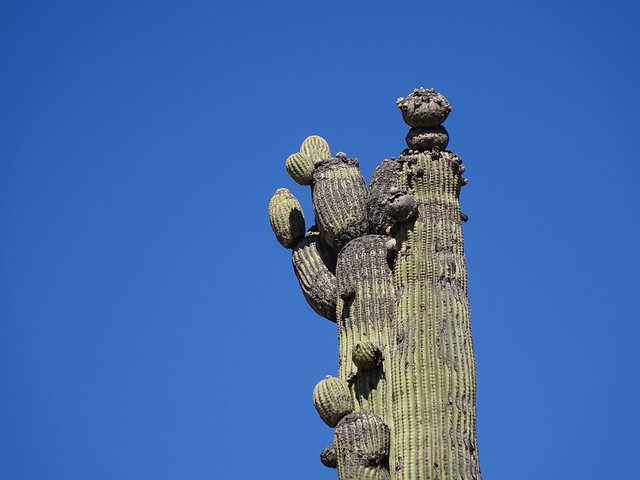 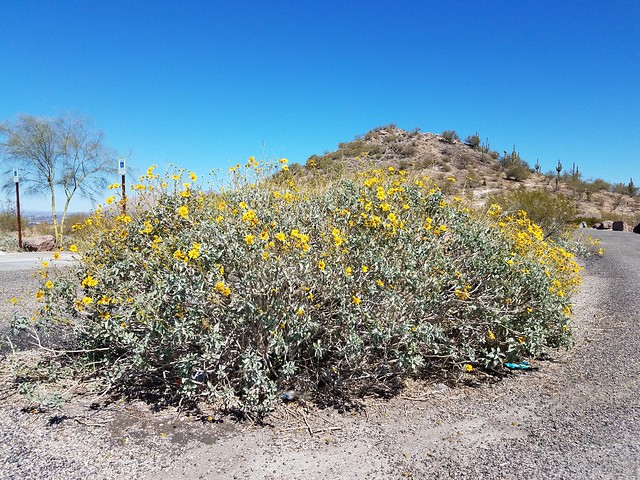 Late that same afternoon we were invited to Gay and Joe’s (good-times-rollin) site to enjoy a delicious dinner with them and Sue and Dave (Beluga’s Excellent Adventures).  We had such a nice time that we forgot to take any photos of the group.  But the food was delicious, the conversation stimulating, and the dog show very entertaining (they have three little dogs known as the Tan Clan). 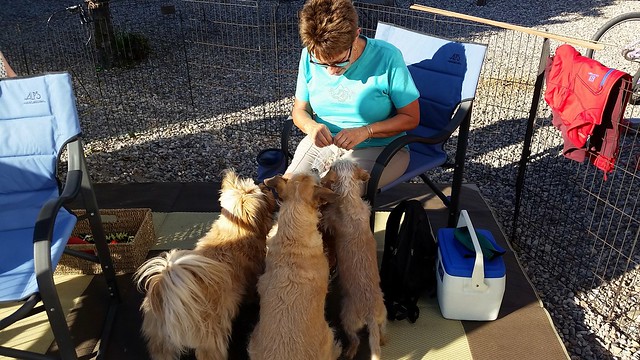 Our final day in Tucson was warm and sunny, so we decided to hike up part of the Explorer Trail (also called the Cat Mountain Trail on some maps) in Tucson Mountain Park.  Steve and MonaLiza (Lowe’s RV Adventures) had recently returned to our park after a trip south to Patagonia State Park so we invite them along for the hike.  MonaLiza was at an appointment but texted that she would love to go if she got back in time.  We waited a bit and had just decided to head out when she drove up and said she could be ready in just a few minutes.  Steve had to take their car in for some repairs so he wouldn’t be joining us.

MonaLiza was soon ready to go and we headed west toward the Tucson Mountains.  We took Ajo Way west for 2.4 miles from where it crosses Mission Road.  At that point there is a small turn-out on the north side of the highway with room for two cars.  The Explorer Trail passes right next to the parking area. 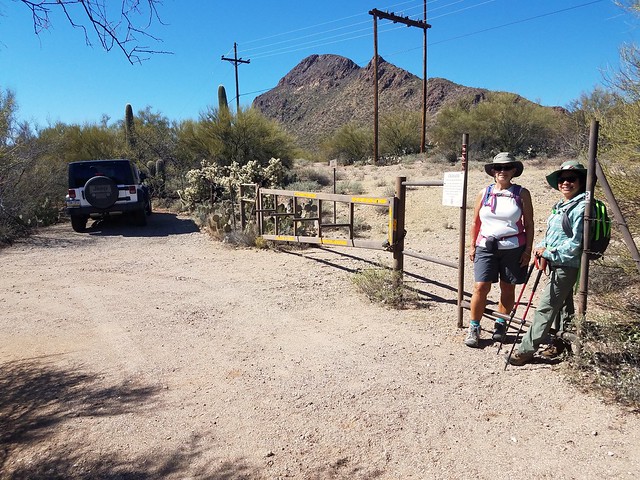 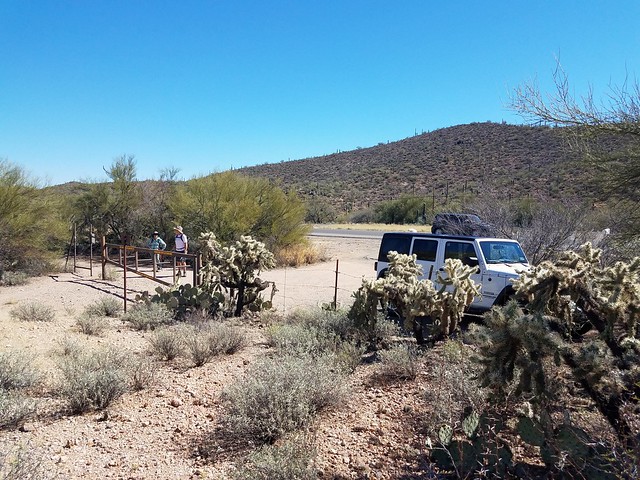 Ajo Way is just beyond the small parking area 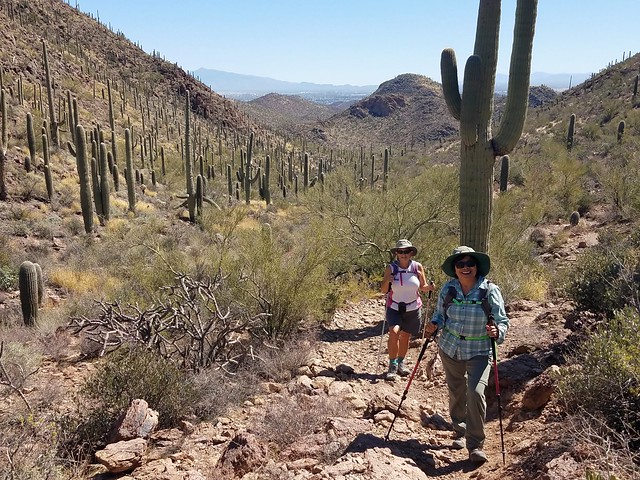 About a mile up the canyon we came to what we have labeled the “M.L. Crested Saguaro Arm.”  MonaLiza and Steve have hiked this trail before so she knew just where it was located. 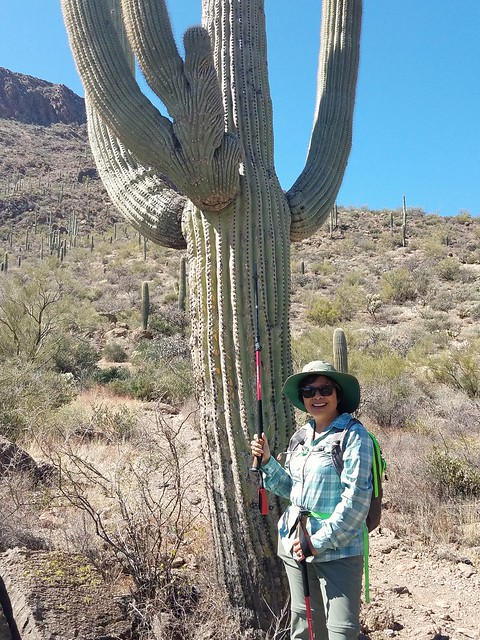 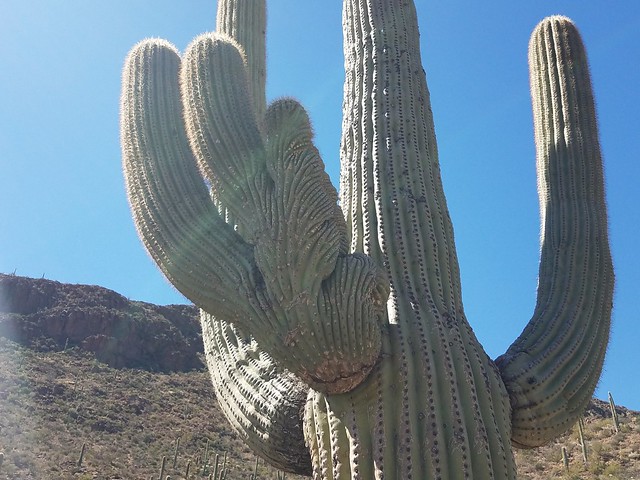 After two miles we came to where the Cat Mountain/Explorer Trail ends at a junction with the Starr Pass Trail.  This was our turn around point, so we hiked up on some high rocks overlooking Starr Pass and enjoyed a bite to eat before returning back down the trail. 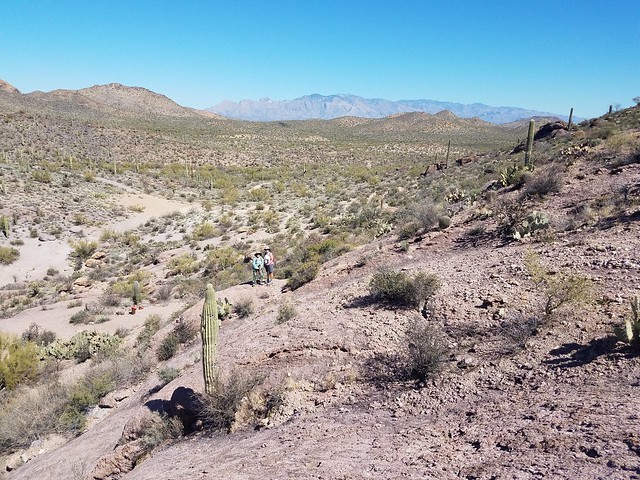 Two frisky young hikers overlooking a flat plain north of the Starr Pass before crawling to the lunch spot! 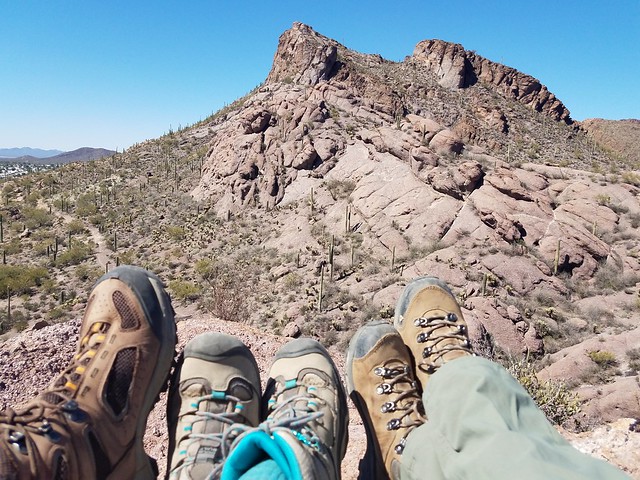 Lunch with a view (of the Little Cat Mountain)

Now our stay in Tucson comes to a close.  It’s hard to believe a month can pass that quickly.  We will now make our way north to Boulder City, NV for a couple of weeks.