Posted on January 1, 2018 by placestheygo

It’s been a while since our last post.  While we have been busy here along Mission Bay, we haven’t done much that would be “blog worthy.”  Since the traffic in San Diego can be a bit trying, we spent most of our time riding our bicycles around the bay to some of the nearby beach communities (riding 149 miles).  We did manage to join Steve and MonaLiza (Lowe’s RV Adventures) on a hike from their site in Sweetwater Summit Regional Park on the south side of San Diego. 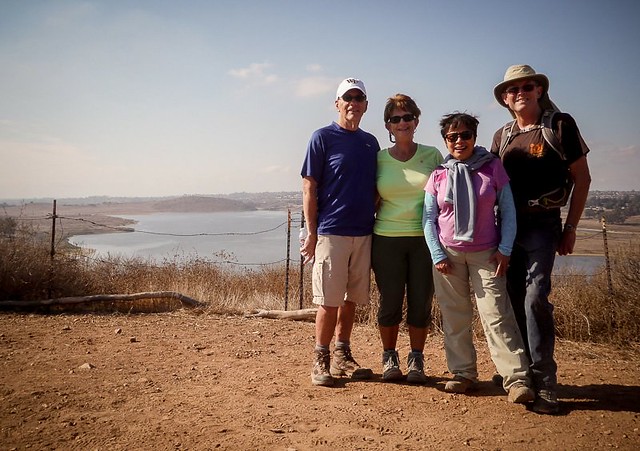 One afternoon we went down to the San Diego harbor area to visit the USS Midway, a decommissioned aircraft carrier permanently docked there and serving as a museum. 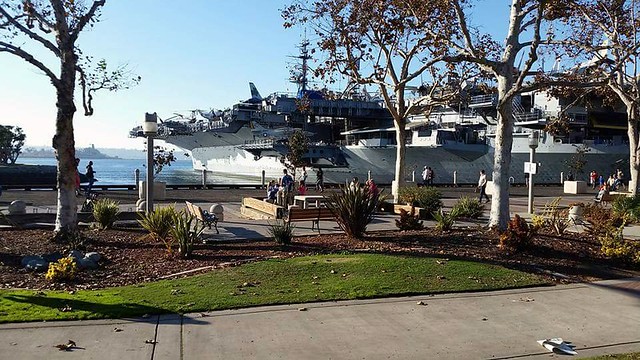 Side view of the Midway

The USS Midway was America’s longest serving aircraft carrier of the 20th century, from 1945 to 1992. Approximately 200,000 sailors served aboard the carrier, known for several naval aviation breakthroughs as well as several humanitarian missions. It was the only carrier to serve the entire length of the Cold War and beyond. 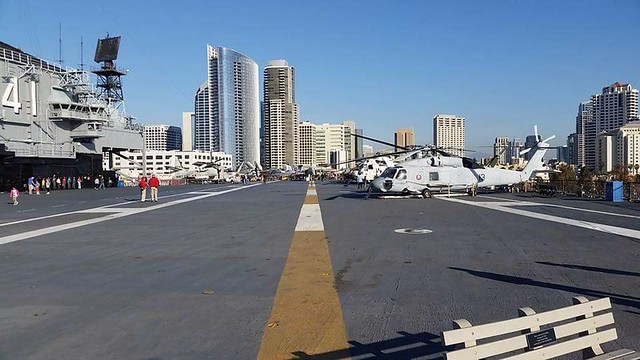 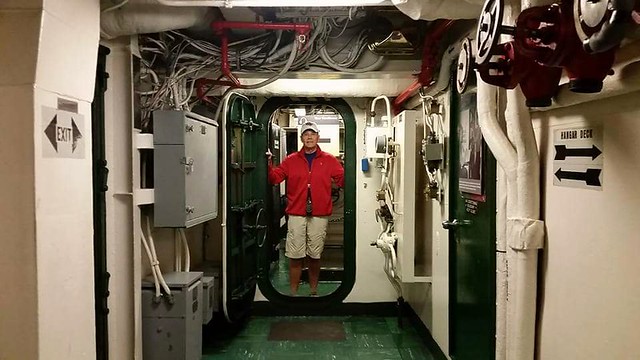 A young sailor makes his way to his battle station

We spent about three hours touring the ship and still didn’t see everything.  Don’t miss it if you visit San Diego! 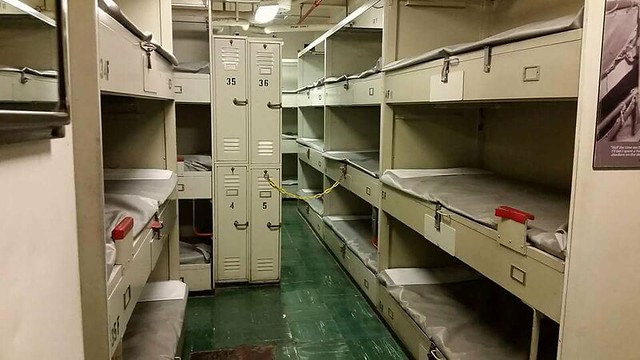 Sailors’ quarters – they had a locker and storage under each bunk

On Christmas Eve we drove down to the airport to pick up daughter Jessica and son-in-law Dan as they arrived on a flight from Baltimore.

The eagle has landed

One of the first things we did with them was to drive over the harbor to make one of the must do stops in San Diego, a visit to the old Hotel Del Coronado in Coronado. 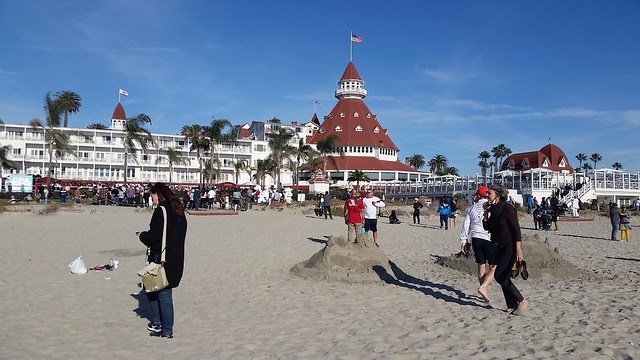 Looking at the old hotel from the beach

The hotel is one of the few surviving examples of an American architectural genre: the wooden Victorian beach resort.  It is the second largest wooden structure in the United States (after the Tillamook Air Museum in Oregon) and was designated a National Historic Landmark in 1977.  When it opened in 1888, it was the largest resort hotel in the world.  It has hosted presidents, royalty, and celebrities through the years and has been featured in numerous movies and books.  In fact, the night of our visit it was pictured in a skit on Saturday Night Live. 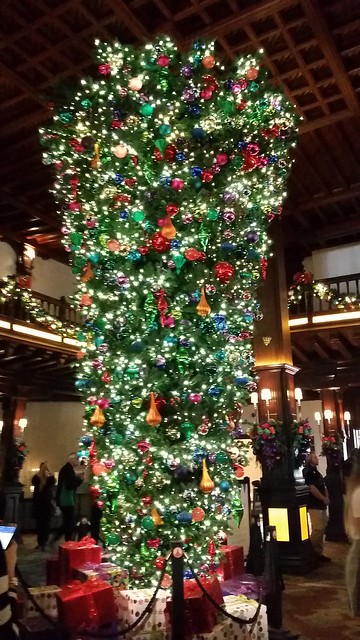 Upside down Christmas tree in the hotel lobby 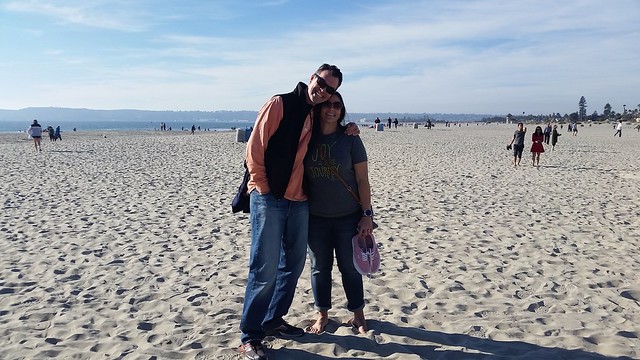 It’s a bit warmer than Baltimore! 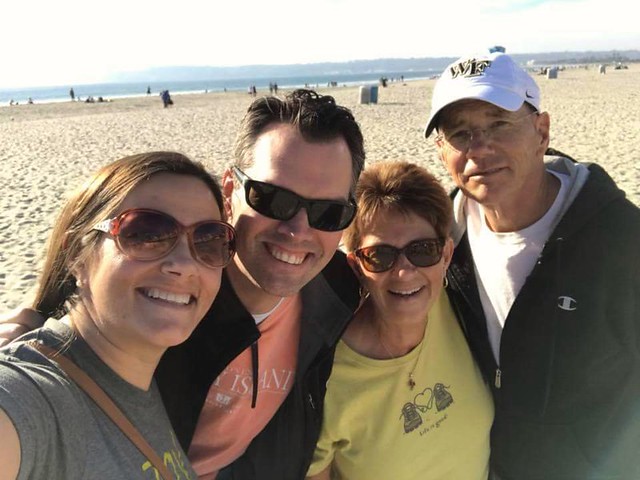 We wanted to share a desert experience with Dan and Jessica so one day during their visit we drove east about 80 miles to visit Borrego Springs and hike a slot canyon in the Anza Borrego State Desert Park.  We’re going to Borrego Springs for a month after we leave San Diego but thought the young couple from the east would enjoy visiting it.  Our first stop was at the Calcite Mine Slot Canyon. 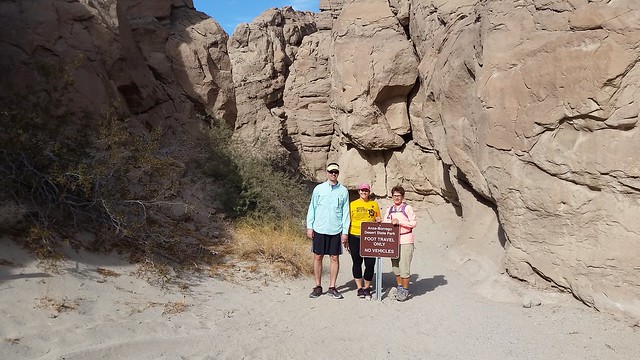 This is a great little hike if you don’t have a great deal of time but want to experience hiking up a slot canyon. 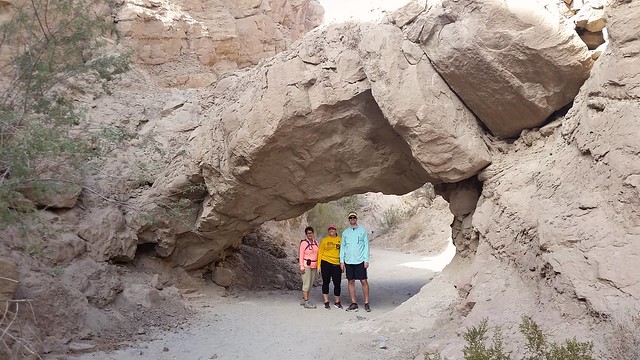 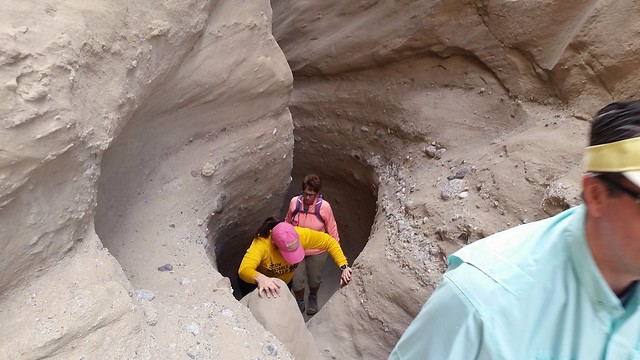 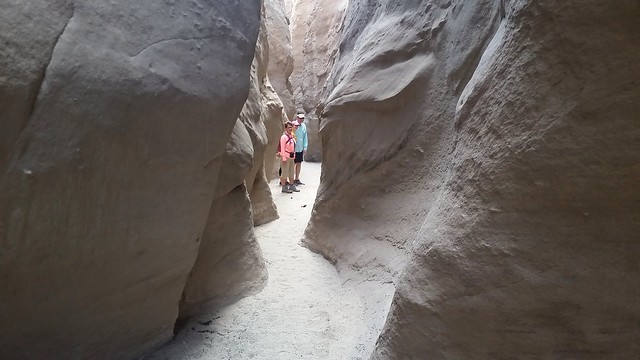 Next we drove out to Fonts Point for lunch overlooking the badlands. 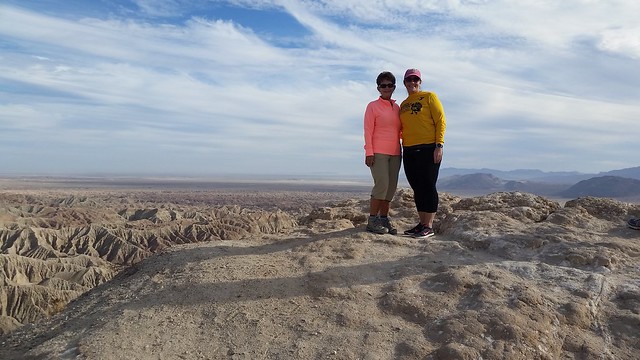 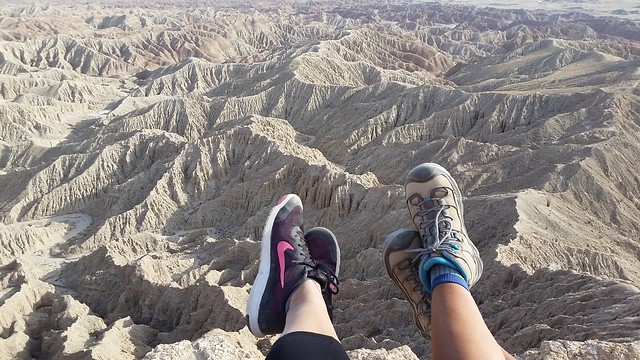 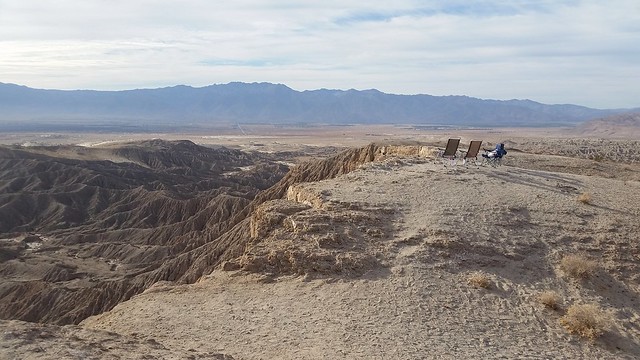 One afternoon we played tourist while visiting a couple of beach towns and a couple of craft breweries.  Our first stop was in nearby Ocean Beach where we enjoyed pizza at Pizza Port.  They had some craft beers on the menu but none of them sounded good to us, so we saved our tasting until after lunch. 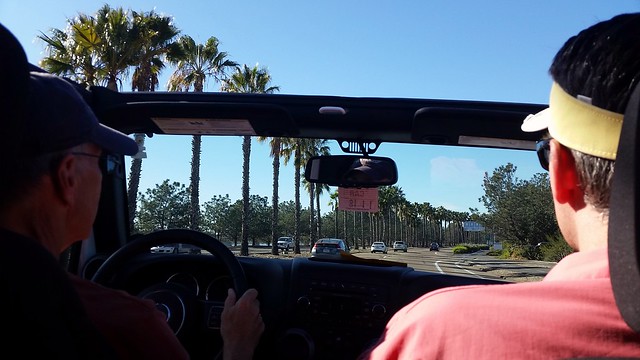 Clear skies and palm trees in late December. What’s not to like!

After lunch we walked a few blocks to the newly opened Belching Beaver tasting room. 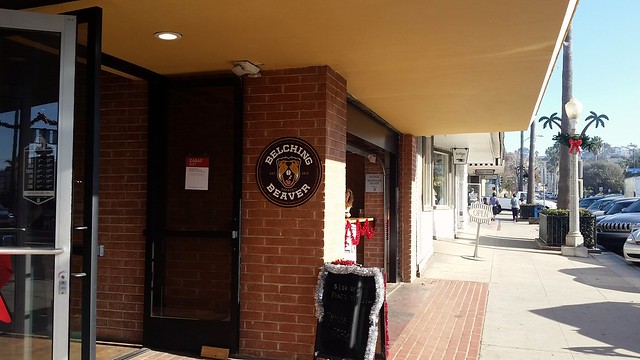 We enjoyed a flight of beers, but our favorite is still their Peanut Butter Milk Stout. 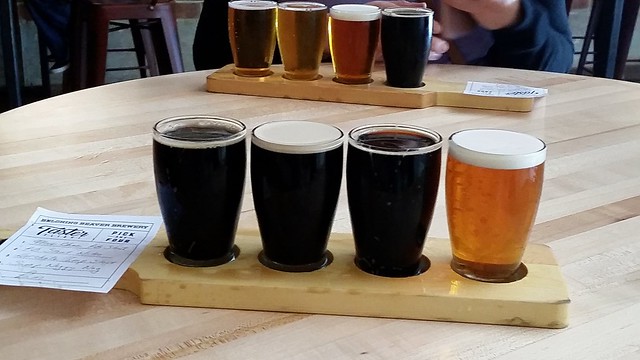 Jessica and Dan with the Ocean Beach Pier in the background 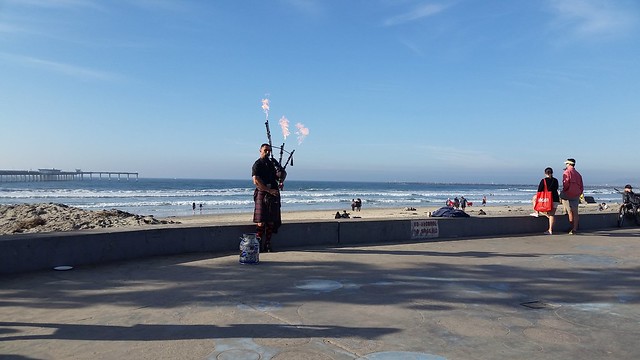 A busker with bagpipes was on fire! 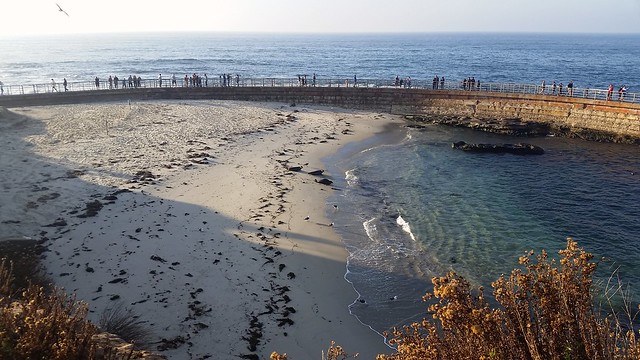 The pool has become a popular viewing area for harbor seals.  Seals and occasionally seal lions haul out on the beach to rest year round.  The Children’s Pool Beach is closed to public access during harbor seal pupping season, Dec. 15 through May 15. 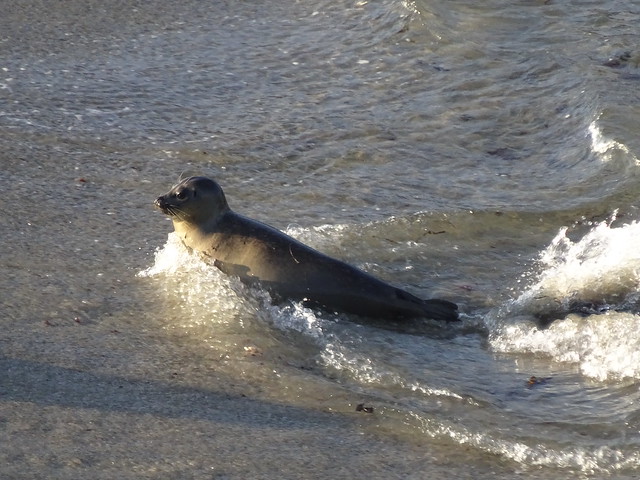 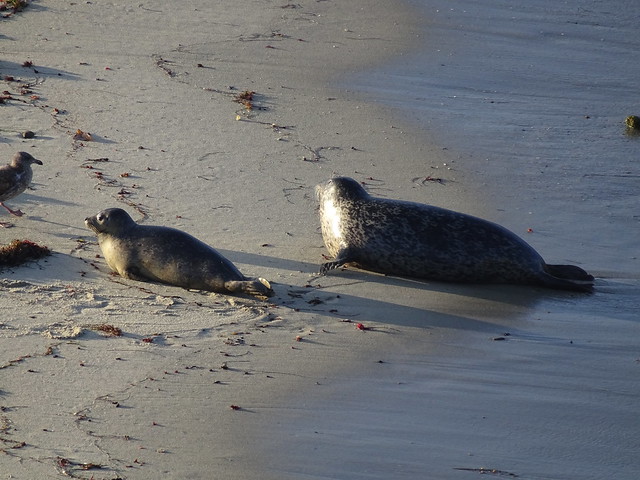 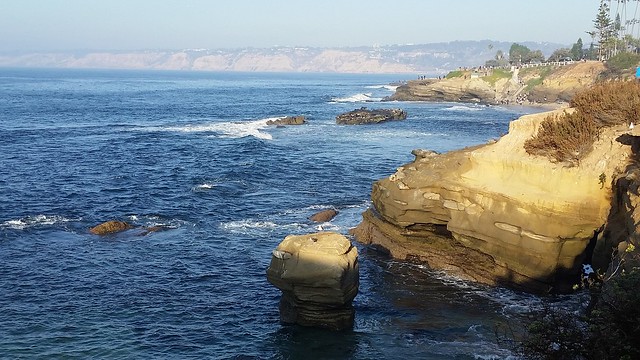 For dinner we drove east of La Jolla to Mirimar for a visit to the Ballast Point Brewing Company. 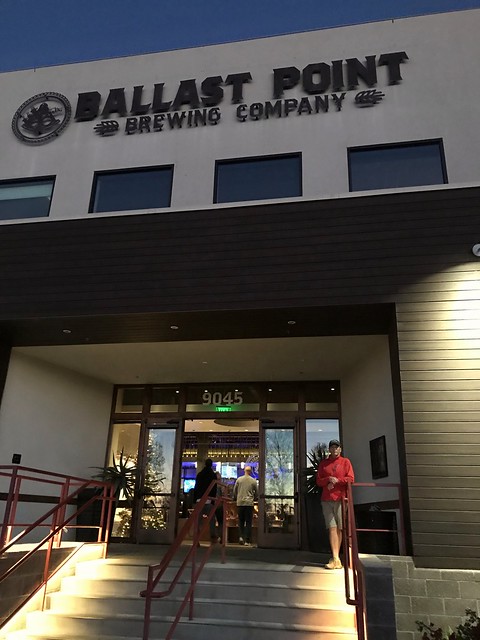 A celebrity waits by the door for his table

We enjoyed tasting some of their many craft beers and enjoyed a delicious meal. 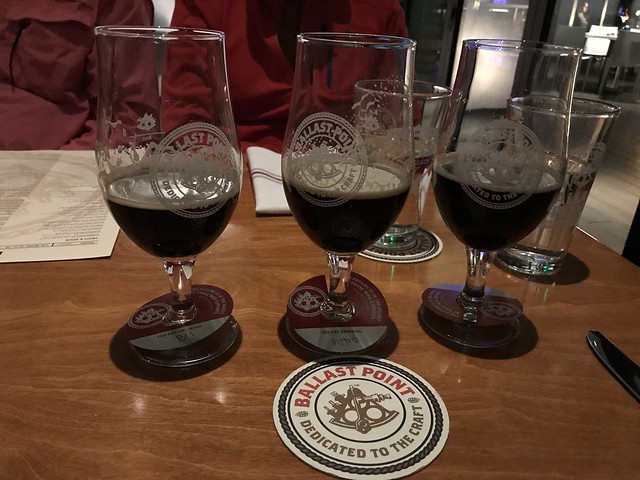 The nitro milk stout was our favorite

After a great visit, Jessica and Dan headed back to the east coast, and we headed east to the desert of Borrego Springs for a month of golfing and hiking.  Dave and Sue (Beluga’s  Excellent Adventures)  will join us so we get to have some pooch time with Lewis. 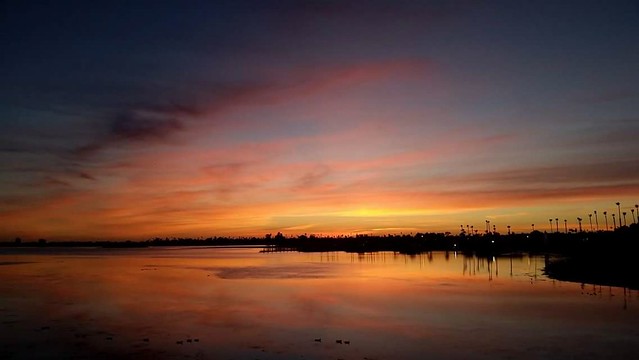 One final sunset over Mission Bay