We’ve been settled in at Mission Bay RV Park in San Diego for over a week now.  The park is basically a large, paved parking lot with lines designating the parameters for each site.  Our site backs up to the bay, giving us a nice view with some beautiful sunsets. 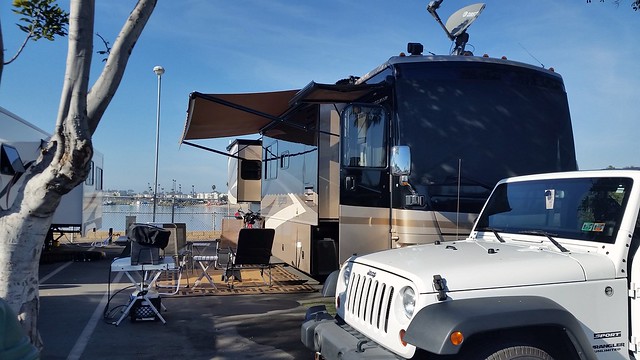 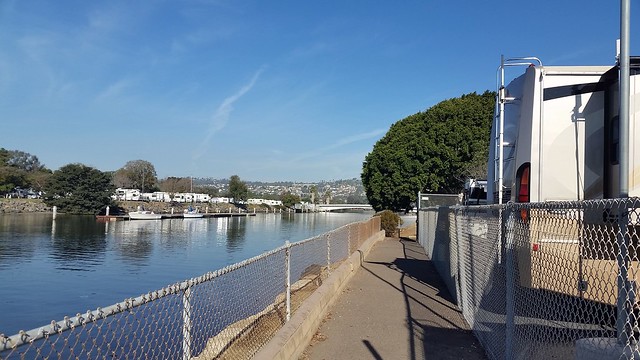 A walking path behind us 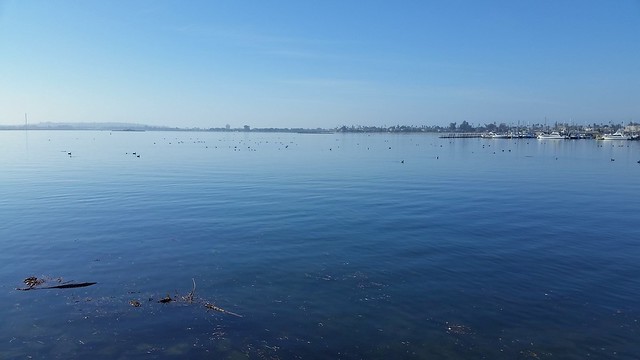 Mission Bay from behind our site

The day after our arrival we were treated to a visit by our friends from England, Neil and Lindsay.  Lindsay follows our blog, and we have met up with them at a number of places during our travels, the last being  December 2016 in Cortez, FL.  The four of us loaded into the Jeep and drove a few miles to the south for a visit to Cabrillo National Monument, located on the highest point at the tip of Point Loma on the north side of the entrance to San Diego harbor. 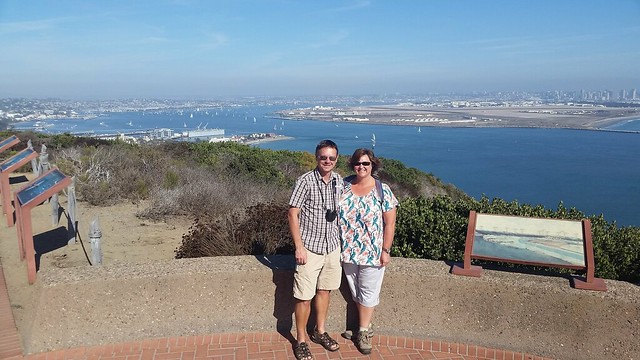 Neil and Lindsay with San Diego in the background

The park commemorates the landing of Juan Rodríguez Cabrillo at San Diego Bay in 1542.  This event marked the first time a European expedition had set foot on what later became the west coast of the U.S.  The Old Point Loma Lighthouse is the highest point in the park and has been a San Diego icon since 1855. The lighthouse was closed in 1891, and a new one opened at a lower elevation because fog and low clouds often obscured the light at its location 422 feet above sea level. The old lighthouse is now a museum, and visitors may enter it and view some of the living areas. 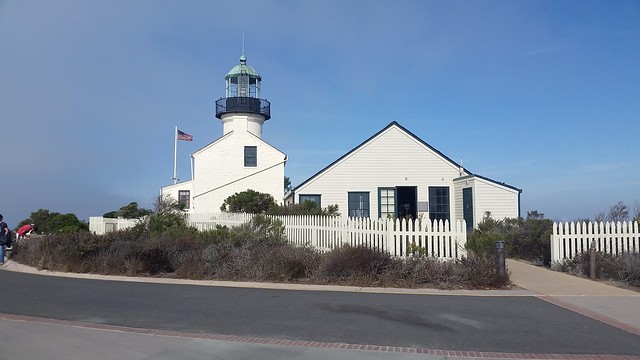 Just below the lighthouse is the entrance to the Bayside Trail, which runs for a bit over a mile down the side of the point.  We hiked down about a mile enjoying the view of the water and the San Diego skyline in the distance. 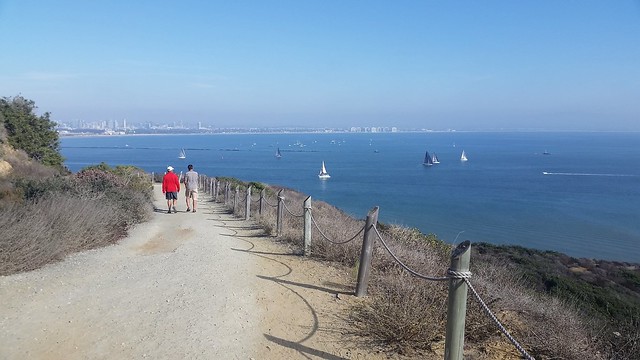 Once back at the top we watched as the USS Decatur, a destroyer built in the late 1990s in Bath, ME, head out to sea. 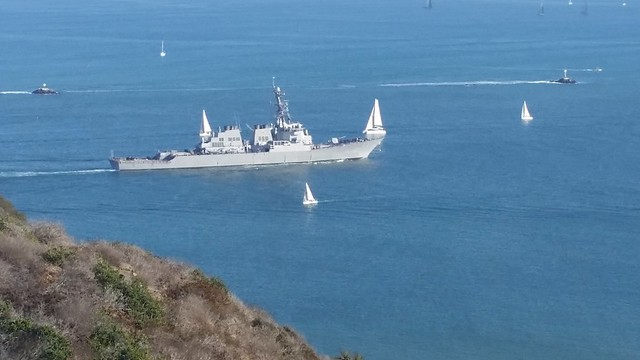 Leaving the monument we drove a short distance to Sunset Cliffs to check out the tide pools, since there was suppose to be an extremely low tide.  There was little to see in the way of tide pools when we arrived but the surf was very high and we enjoyed watching some of the many surfers taking advantage of the big waves. 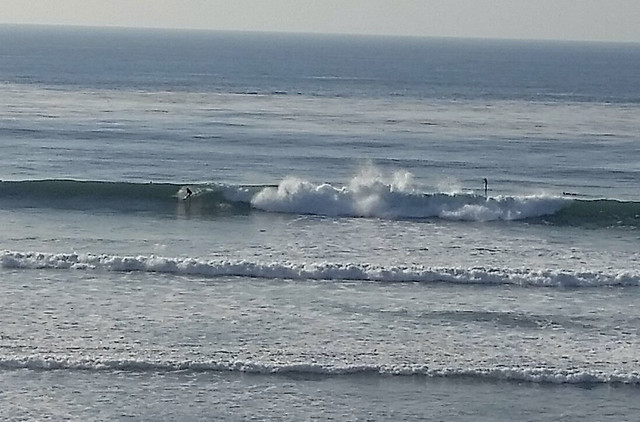 We finished the day with a nice meal at a nearby restaurant, Dan Diego’s, before saying good-bye to Neil and Lindsay as they faced a long flight back to England the next day.

The beach is just an easy bike ride from our park so we often ride there to enjoy the view.  One day while sitting on a low wall separating the beach from the biking/walking path we heard someone loudly saying “hello” over and over again.  It turned out to be an old fellow named Chief. 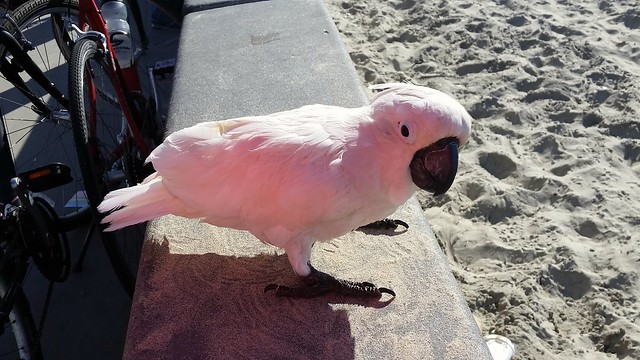 He was a friendly guy who even walked over to get a bit of affection from a local girl sitting on the wall. 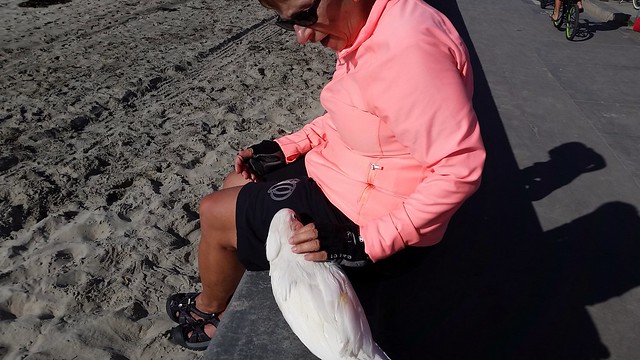 The Jeep has been making a tapping noise the past few months, indicating a collapsed or sticking lifter.  So we made an appointment with Rancho Chrysler Jeep, a dealer only a few miles from the park, and took it there the Monday after our arrival.  Since we were not sure how long the repairs would take we went across the street from the dealer and rented a car.  It’s been a long time since we drove around in a full size, four door sedan so it seemed strange to ride in a new Chrysler 300 for a day or two.  It is a nice vehicle but we think it would have trouble navigating some of the mountain and desert trails we take in our travels!  Our repairs were completed the next day so we only had the rental for a short time.  It felt good to return to the Jeep (without the annoying ticking from the bad lifter). 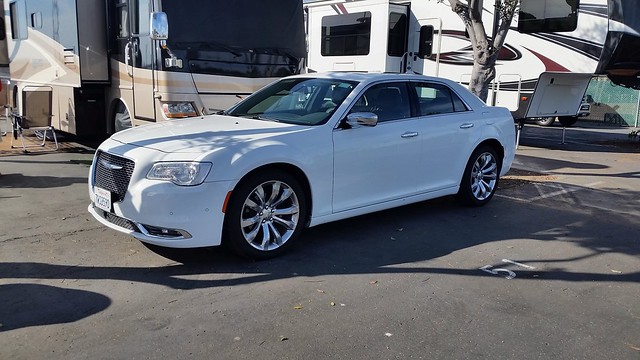 The same day we took the Jeep in for repairs we had a visit from friends Laurel and Eric, who were staying north of us near Poway.  They brought their bicycles with them so we could enjoy a nice ride around Mission Bay. 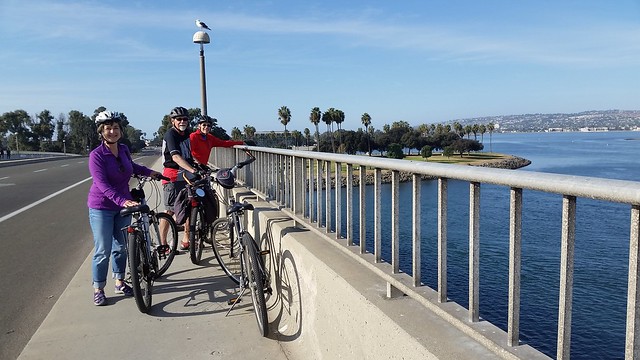 Late that afternoon we met them again at Liberty Station to do some sightseeing before joining a large group of friends for dinner.  Liberty Station is a mixed-use development  on the site of the former Naval Training Center San Diego in the Point Loma section of San Diego. When the Navy closed the base in 1997  the city took it over.  Since then it has been developed into several distinct districts: a retail and commercial district, a promenade focused on nonprofit activities, an educational district, a residential district, a hotel district, an office district, and a park/open space area along the boat channel.

The four of us spent about an hour roaming through part of the development enjoying the holiday decorations.  Cool temperatures added to the holiday atmosphere. 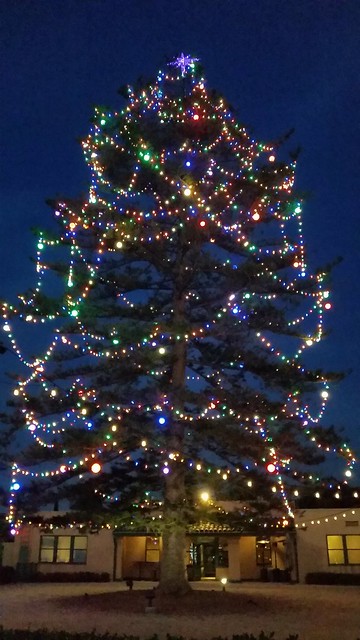 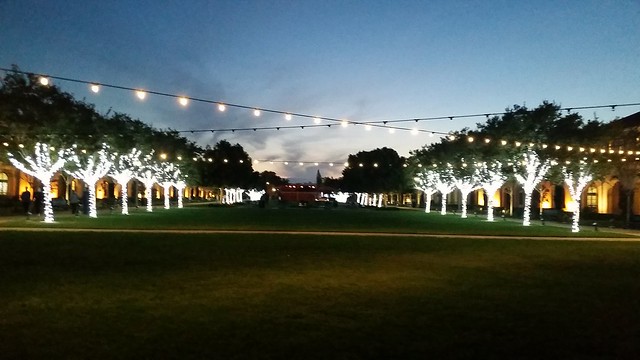 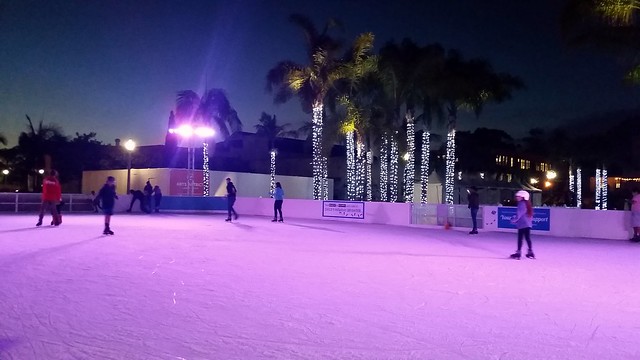 We then walked over to the Stone Brewing Co. where we had dinner reservations for ten.  The stars lined up here in San Diego and brought five full time RV couples together for a night.  We spent the evening enjoying a meal, an adult beverage, and great conversation as we caught up with each couple’s travels. 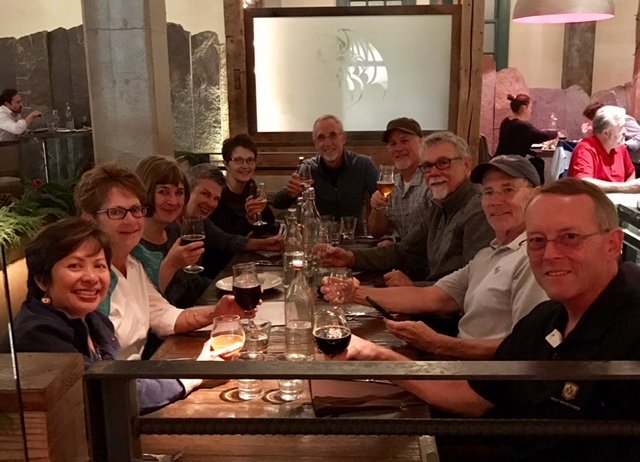 The next day we rode our bikes to Ocean Beach for lunch at Wonderland Ocean Pub, a nice bar on the second floor of a building with a great view of the Ocean Beach Pier.  We visited this pub a few times during our stay here two years ago and loved the Belching Beaver  Peanut Butter Stout and Pozole (Mexican soup with homony) they offered.  Unfortunately, neither were being served that day, but we did enjoy a stout and a cup of Clam Chowder while watching the surfers near the pier. 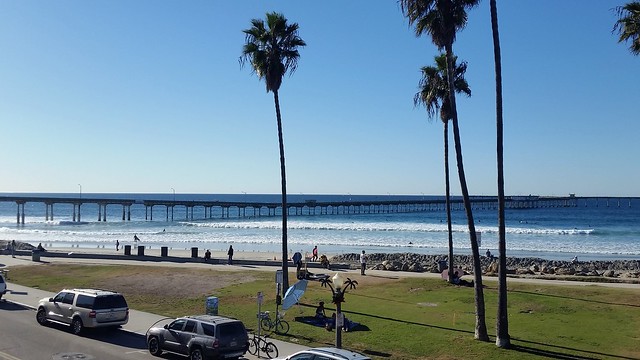 At the end of the week Hans and Lisa rode with us up to a point between Del Mar and Torrey Pines where we met Steve and MonaLiza for a little “urban hiking.”   San Diego is a unique location that is build on areas of land separated by undeveloped canyons.  So you can hike for a while in what seems to be wilderness, then climb up and find yourself in an urban neighborhood.  Hans and Lisa are former residents of San Diego and know a number of interesting hikes here, so they acted as tour guides. 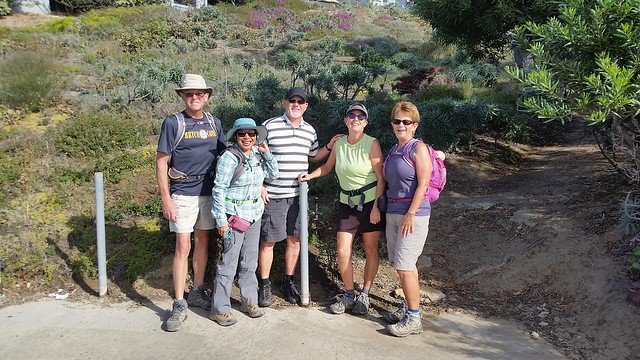 Steve, MonaLiza, Hans, Lisa, and Pam at the trailhead

We parked along Torrey Canyon Road and headed north into an area that is part of Torrey Pines Park Reserve. 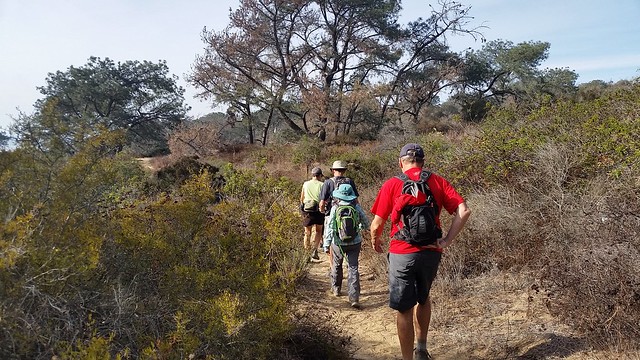 This is a classic urban hike.  For the most part we were down in a rough canyon that led through some narrow erosion channels. 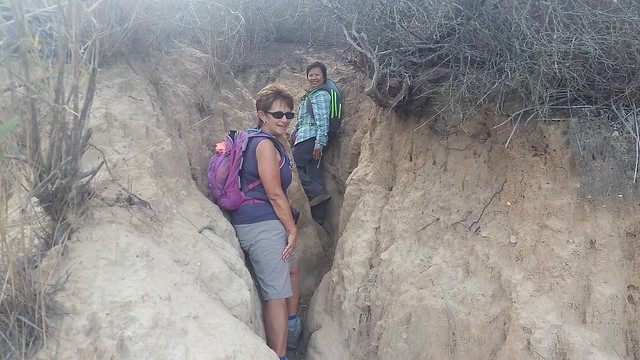 Then we would climb to the top of the canyon and take a sidewalk through a neighborhood. 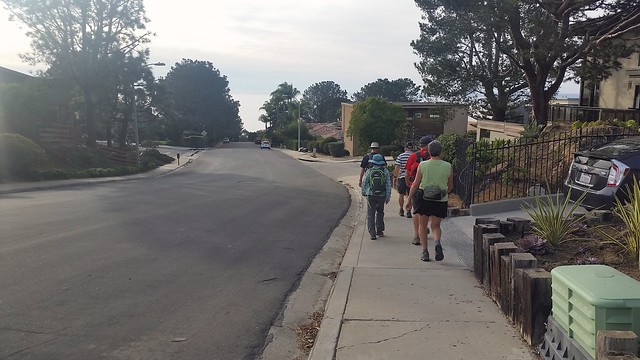 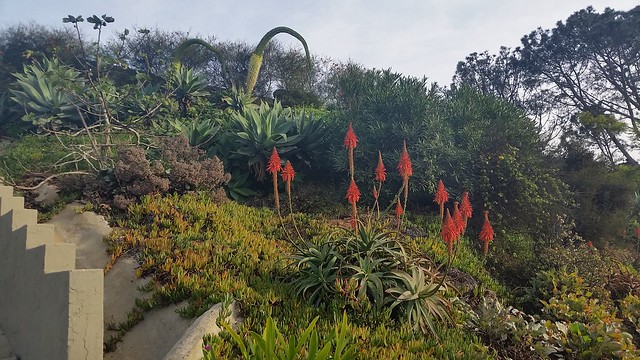 Exotic vegetation along the way 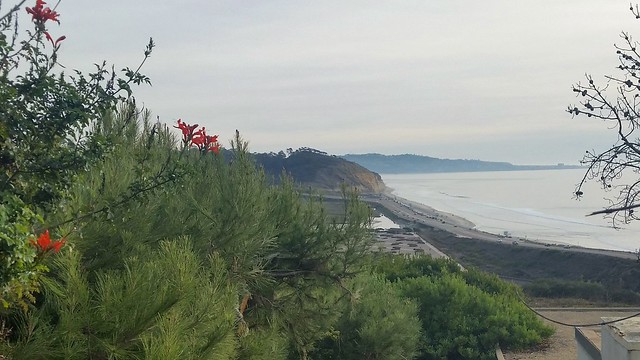 After our hiking adventure we returned to our site to enjoy a happy hour at sunset.  This group is very cooperative for a group photo as long as you shower them with compliments. 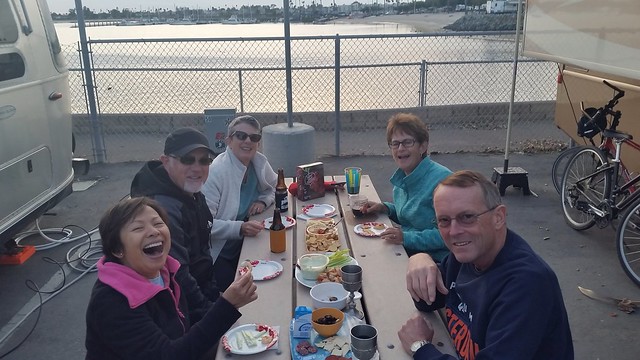 But just ask them to pose without giving any compliments and you get a quite different reaction! 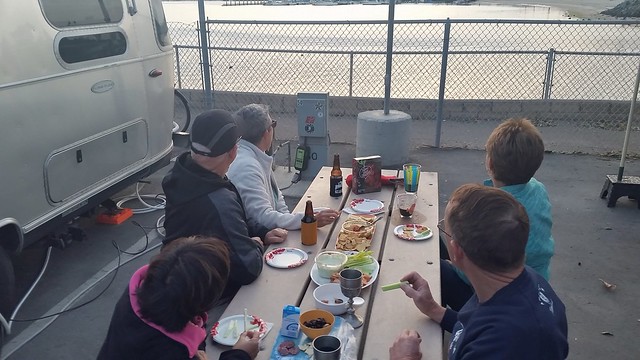 Hans told us about a Saturday evening happy hour at Humphrey’s Backstage Live on Shelter Island, just past Liberty Station along the San Diego waterfront.  Half price drinks and food with a band playing mostly oldies and no cover charge sounded great to us so off we went.  We had a nice meal while enjoying the music, and we were home at 7:00.  Wild times for sure! 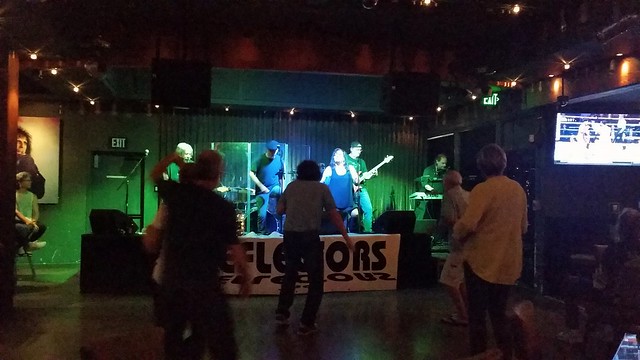 We’re only about a third of the way through our stay here so more adventures are sure to take place.  More on those later . . . 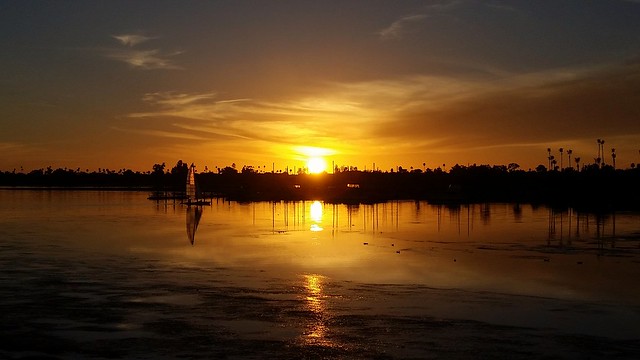 The sun sets over Mission Bay