A Visit to Hemet, CA

Posted on December 1, 2017 by placestheygo

As we make our way toward San Diego for the month of December we had a week to explore somewhere new.  It is about 160 miles from our last stop in Twentynine Palms to San Diego so we decided to split the trip in half.  We looked at a map and found the town of Hemet, CA almost exactly at the half way point, so we reserved a spot there in the Golden Village Palms RV Resort. 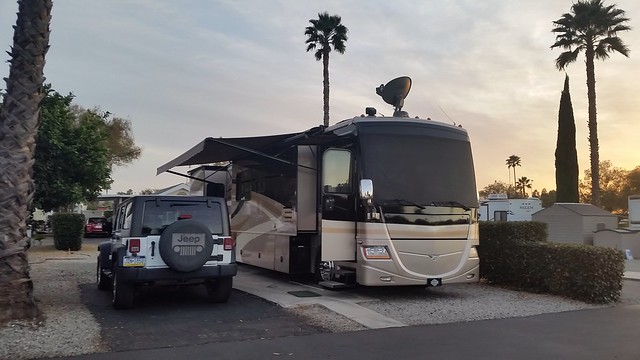 Hemet is a city of over 80,000 people located in what is called the Inland Empire.  We spent a relaxing time here, doing some cleaning and minor repairs to the motorhome.  But we did find time for a couple of decent hikes near the city.

Just a few miles to the south is Diamond Valley Lake.  The lake is one of the largest reservoirs in California and one of the newest, completed in 2003.  The water for the reservoir is pumped from just north of the Parker Dam on the Colorado River along the California – Arizona state line, over 200 miles away.  A number of hiking trails go around the lake.  We decided to hike the North Hills Trail about 2.5 miles up to a viewpoint overlooking the lake. 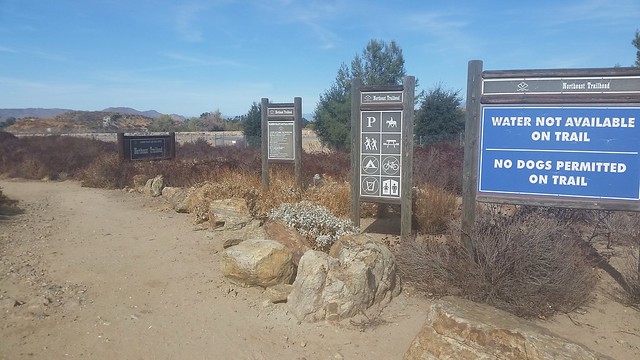 The trail goes up and down over a series of small hills before it turns to the south, going  around a water tower, then steeply uphill to the overlook. 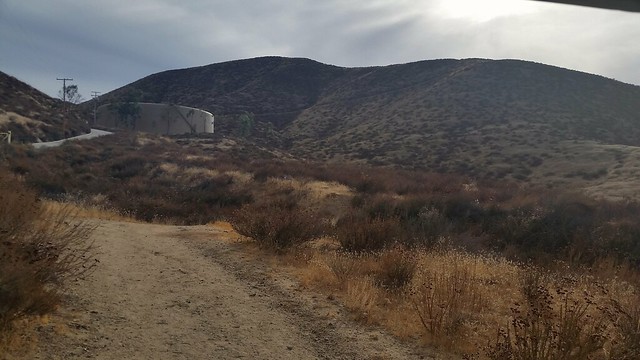 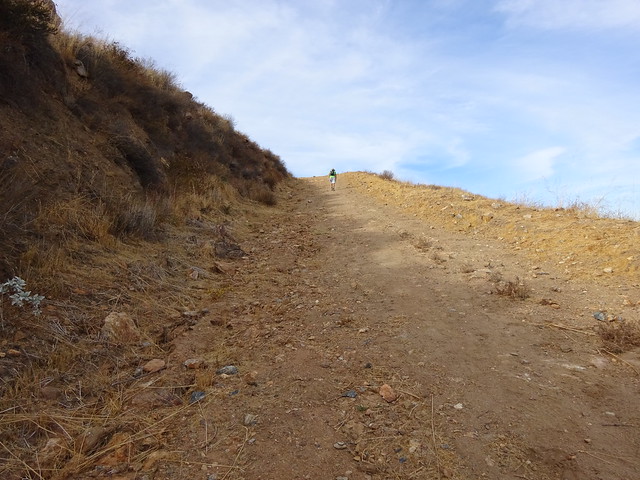 Going steeply up toward the vista

As we climbed the steep trail the lake came into view behind us. 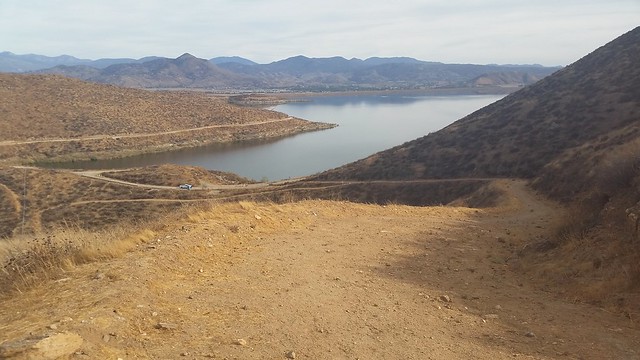 Near the top of the hill is a flat area with a picnic table.  We continued past it and headed further up the next hill behind the table. 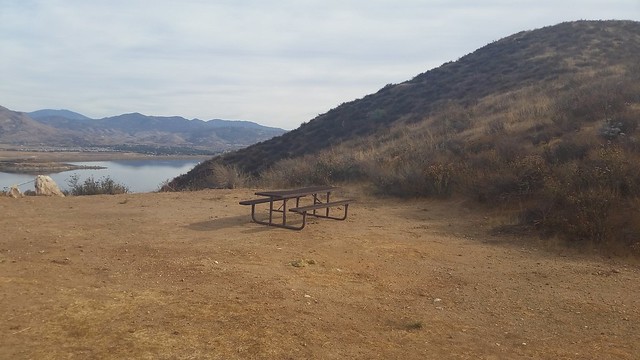 At the very top of the hill we had a great 360 degree view of the lake to the south and Hemet to the north. 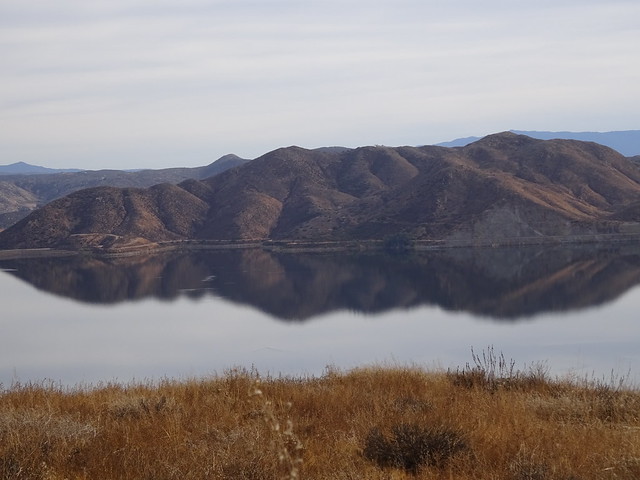 The view south across the lake 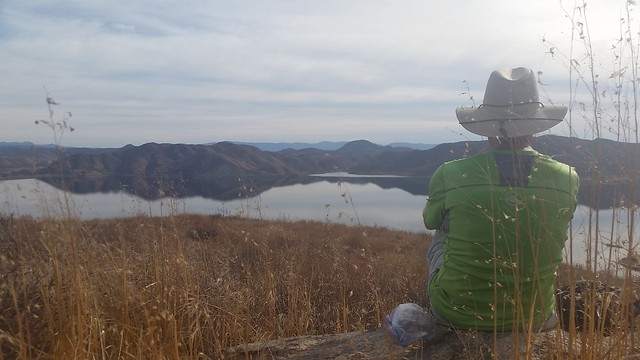 Walt Whitman ponders his next poem 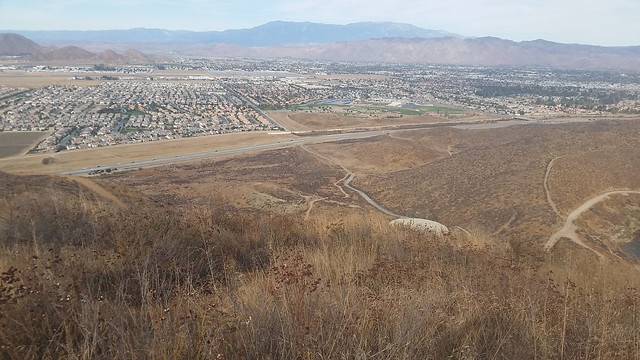 The city of Hemet to the north

Hemet sits on the western base of the San Jacinto Mountains.  One day we drove almost 30 miles up into the mountains to the town of Idyllwild, where we found our way to Humber Park located at 6,100 ft.  The small park located above the town serves as the trailhead to a couple of trails.  We went there to hike on the Ernie Maxwell Scenic Trail (Maxwell founded the town’s newspaper).  Towering over the parking area for Humber Park is Lily Rock (also know as Tahquitz Rock, part of Tahquitz Peak), a popular spot for climbers.  The rock is said to have a lily white appearance, which might account for the name.  Another theory is that it was named for Lily Eastman, who was the daughter of one of the founders of the nearby city of Riverside. 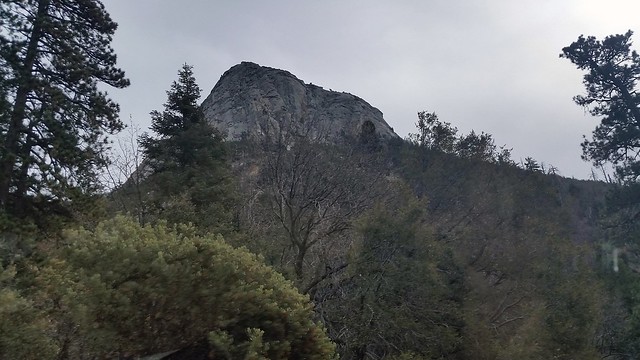 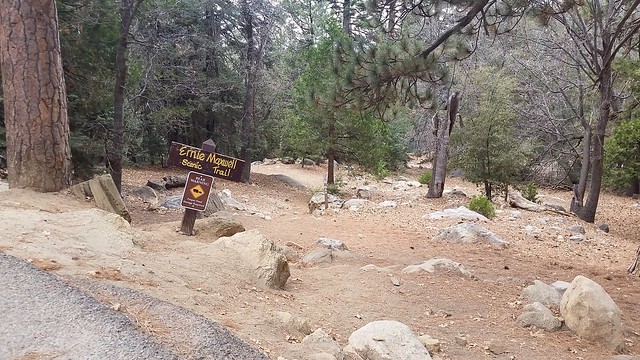 The Ernie Maxwell Scenic Trail goes slowly down the side of a hill for about 2.7 miles for a 675 ft overall descent.  We hiked about two miles before stopping for a snack and returning back up the trail. 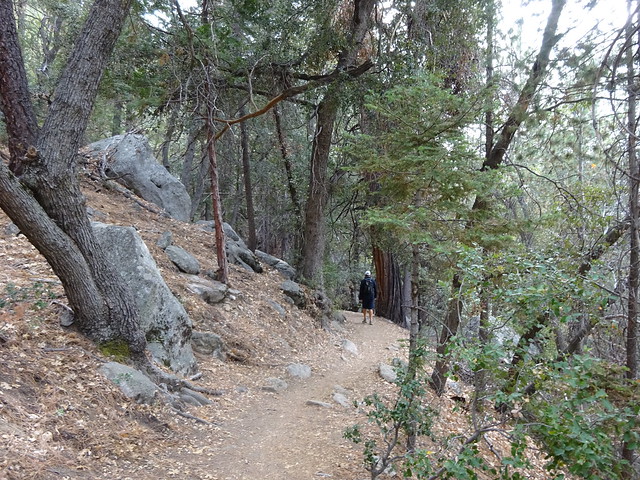 At one point we caught a glimpse of Diamond Valley Lake to the west. 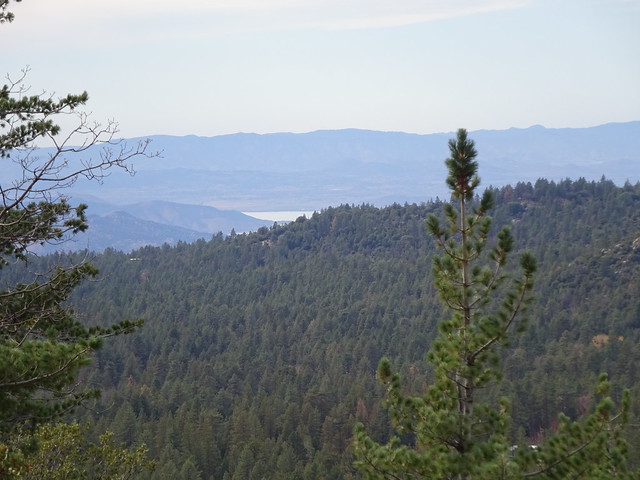 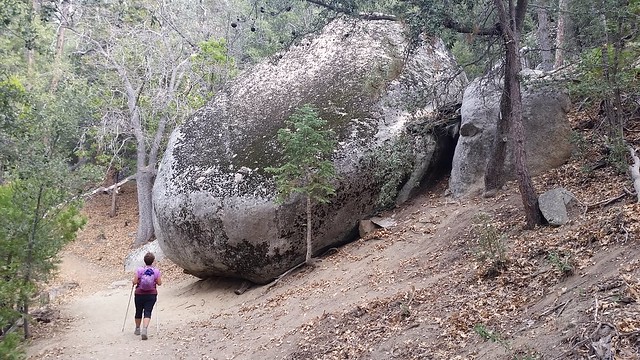 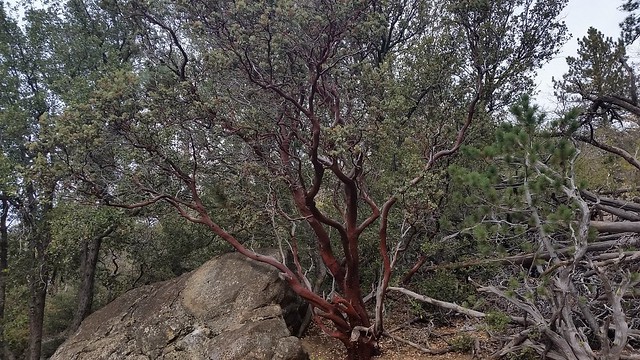 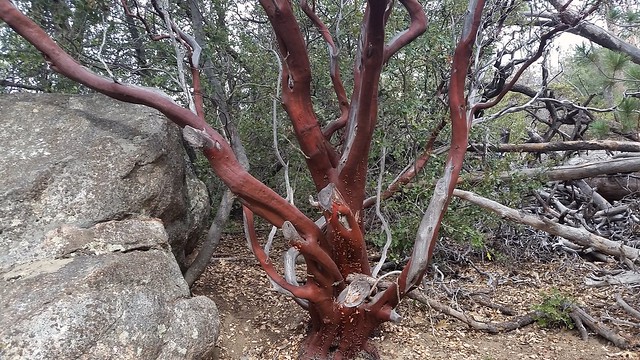 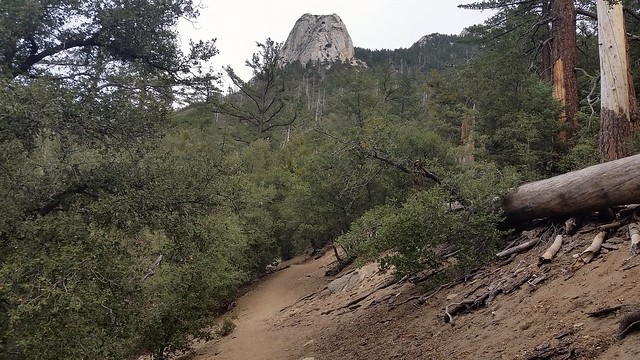 Nice view of Lily Rock from the trail

Just to our north we could see Suicide Rock.  According to legend, the name of Suicide Rock comes from a story of a Native American princess and her lover who, after being ordered to separate, instead committed suicide by jumping off the rock.  It is speculated that this story originated in an attempt to boost tourism to this area in the late 19th century. 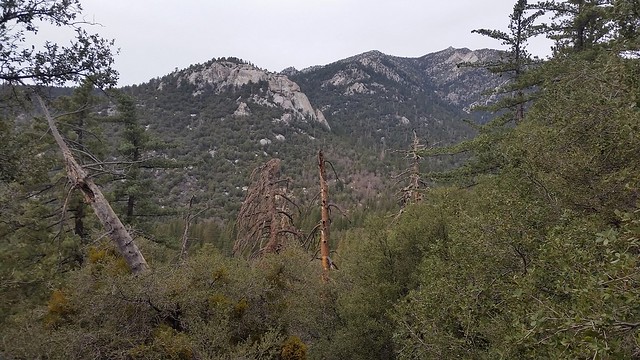 Suicide Rock on the left

Driving back down to Hemet we enjoyed some great views of the valley below. 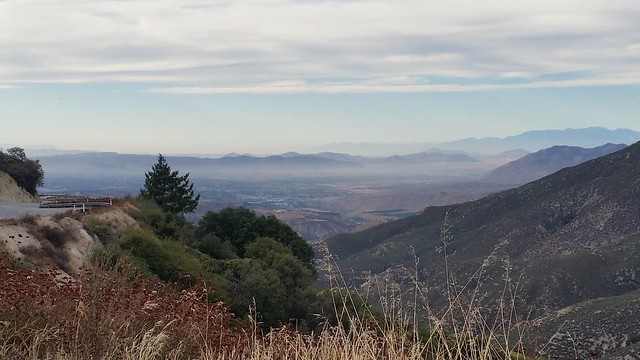 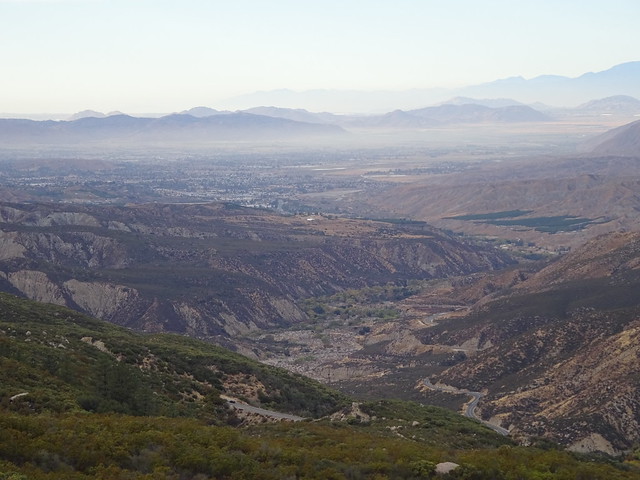 After a pleasant week in Hemet we will now complete our journey south to San Diego where we will be spending a month in Mission Bay.  More on that later . . .

18 Responses to A Visit to Hemet, CA