The Strip, a Golf Tournament, and some Hiking around Las Vegas

Posted on November 6, 2017 by placestheygo

Each season, the Bellagio Hotel and Casino transforms a large area called the Conservatory into a showcase of the sights and colors of spring, summer, fall and winter along with a special display for Chinese New Year.  We knew the fall display, called Proud as a Peacock, was open until the third week of November, so one afternoon we drove to the Las Vegas Strip to check it out.  On the way up Las Vegas Boulevard we passed the famous “Welcome to Las Vegas” sign, currently filled with mementos dedicated to the victims of the recent shooting. 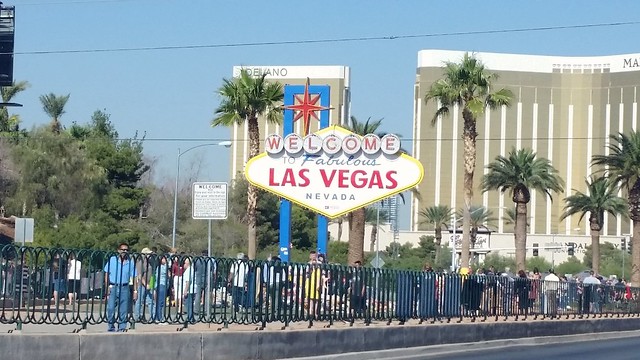 After parking in a large lot near the Tropicana Resort we walked up Las Vegas Boulevard enjoying the sights on The Strip.  Once at the Bellagio we made our way through the casino to The Conservatory where we enjoyed the beautiful displays. 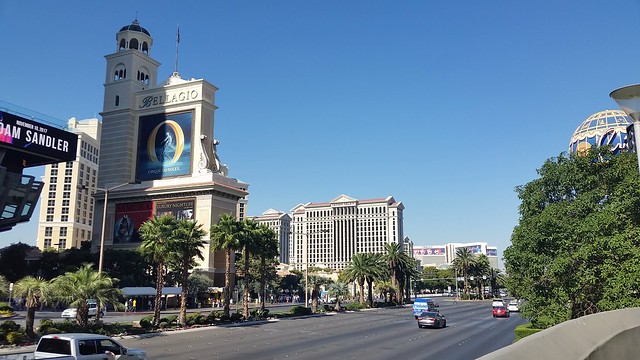 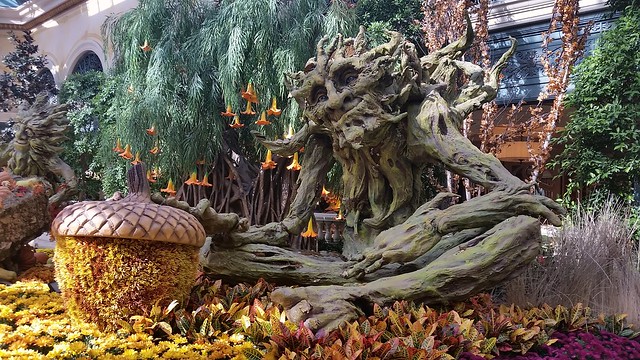 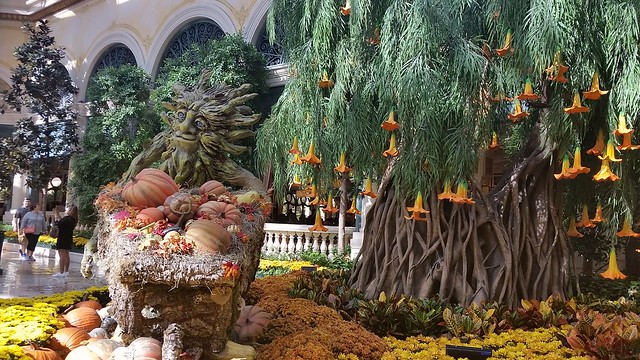 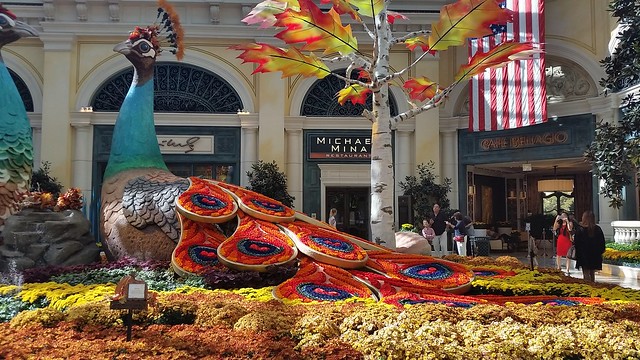 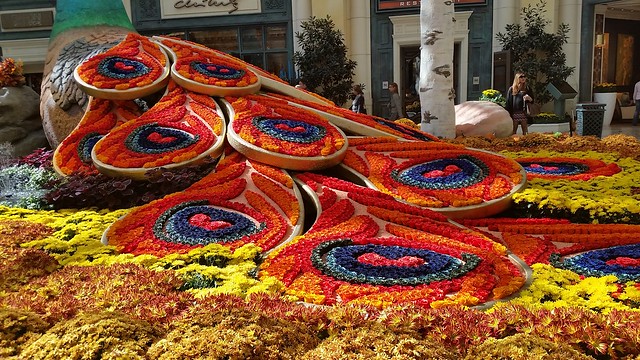 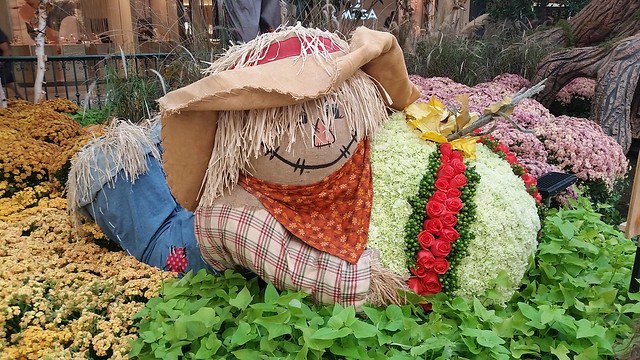 During our stay in the Las Vegas area, the PGA was holding their annual Shriner’s Hospital Open tournament at the TPC Summerlin Course.  We love golf and watch most PGA tournaments on TV but have never attended one before.  So we took advantage of our proximity to Summerlin, just northwest of the city, and attended the first round.  We enjoyed the experience, following a couple of our favorite golfers on the front nine, but decided that we would rather watch it on TV. 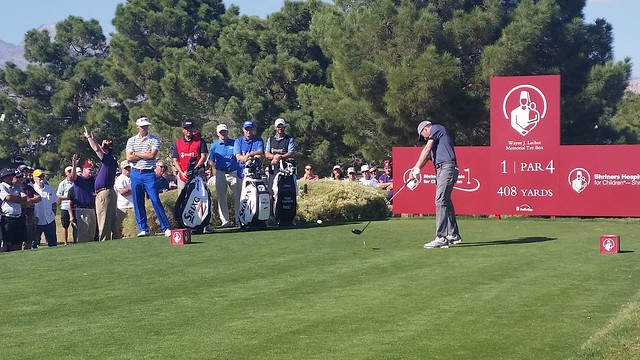 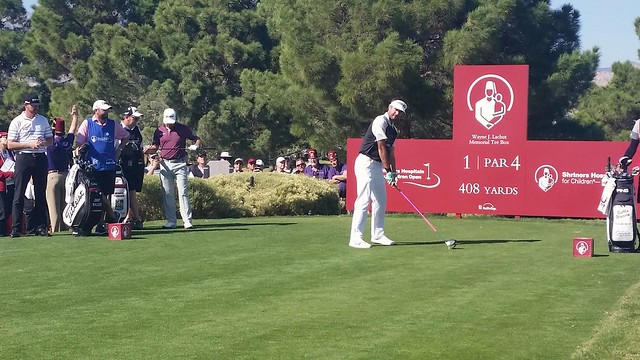 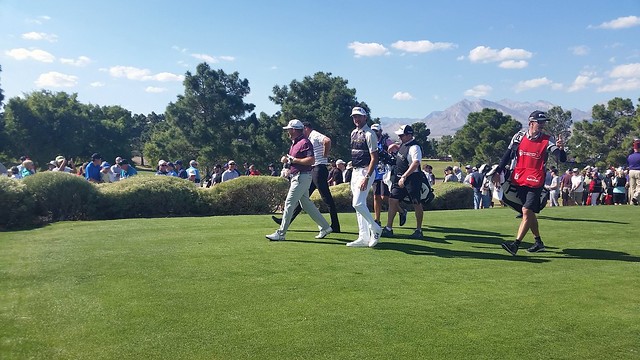 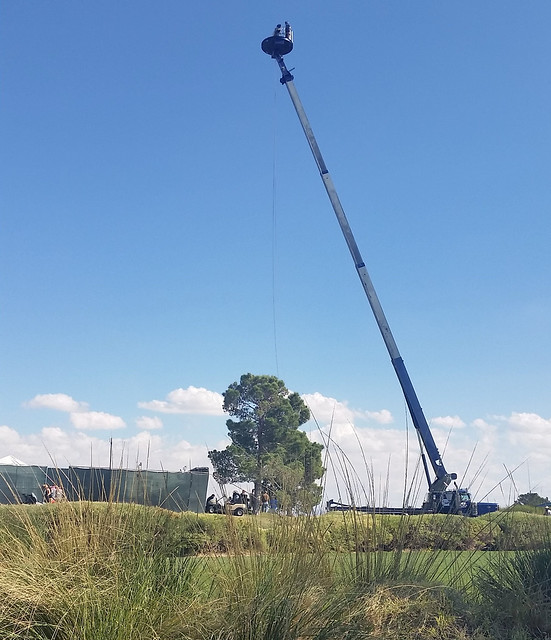 The best seat in the house

The tournament was shown live on The Golf Channel so we know most of you saw us on TV.  But for those of you who missed it, below is a photo from our appearance.  That’s John with the blue shirt and Pam next to him in pink. 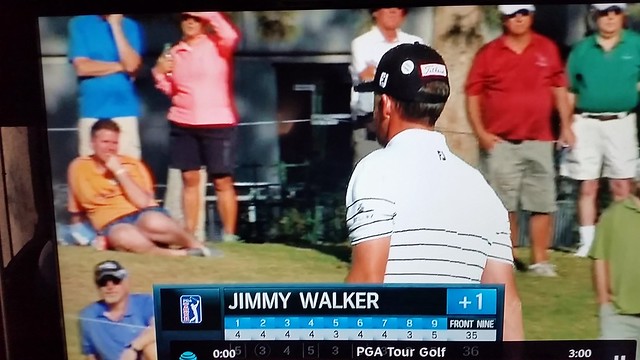 A pair of stars are born!

On our way home from the tournament we stopped in Henderson to share a dinner with a couple from our home town, Dustin and Jennifer, who now live in Henderson.  Dustin was a student in Pam’s third grade class a few (OK, more than a few) years ago.  They have kept in touch ever since but have not seen each other since he was in high school.  So it was great to catch up with the two over dinner at Claim Jumpers in Henderson. 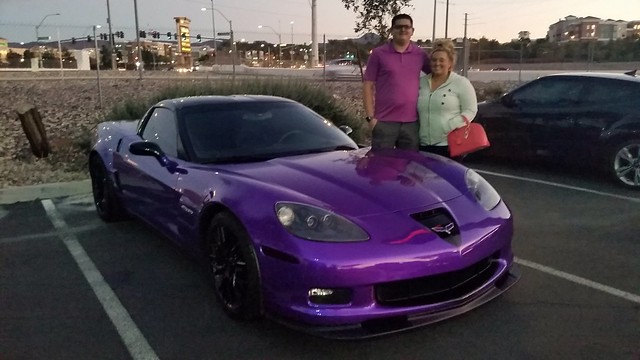 Dustin and Jennifer next to their pride and joy

Our last adventure for this visit to Boulder City was a hike in the River Mountains behind the Railroad Pass Casino.  The casino is located along US 93 between Las Vegas and Boulder City.  We parked in back of the casino and climbed up a bank to a paved bike path. 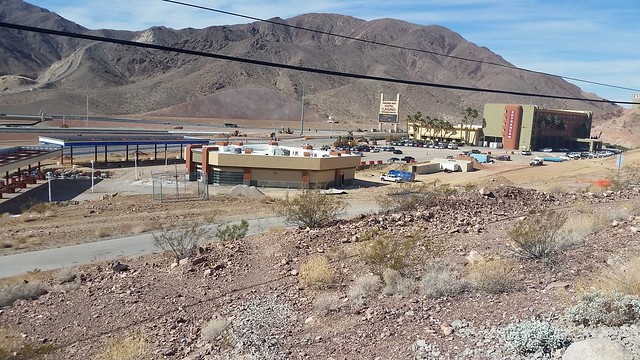 Looking back down at the casino

We walked the bike path for a short distance before crossing a set of railroad tracks and heading up the trail.  The bike path is a section of the River Mountain Loop trail, a 34 mile paved path that surrounds the River Mountains connecting Lake Mead National Recreation Area, Hoover Dam, Henderson, and Boulder City.  The hiking trail is part of a series of hiking and mountain biking trails in the Bootleg Canyon Park. 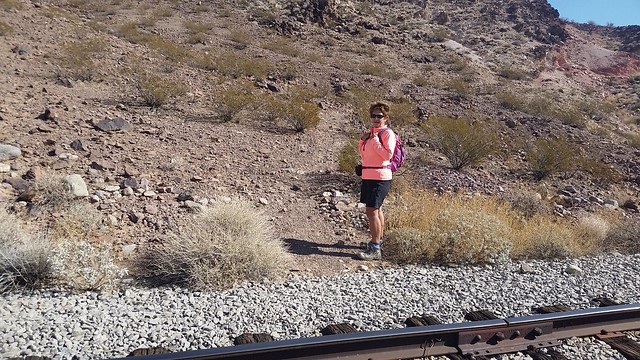 Heading up from the railroad tracks

We combined two trails, the Sh*t Trail (that’s how Google Maps spells it) and Ernie’s Trail, for a scenic five mile loop hike.  As we rounded a hill on the Sh*t Trail we could see what looked to be the entrance to an old mine on the hillside below us.  A look through binoculars revealed a bicycle sitting at the entrance along with a fairly new Weber grill. 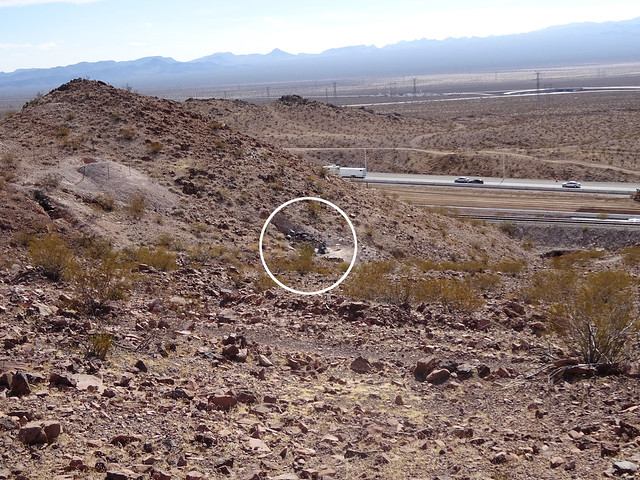 As we watched we were surprised when a man and a woman came out of the entrance and put something on the grill.  We don’t know if they are living in the mine or looking for gold during the day.  Very strange . . . 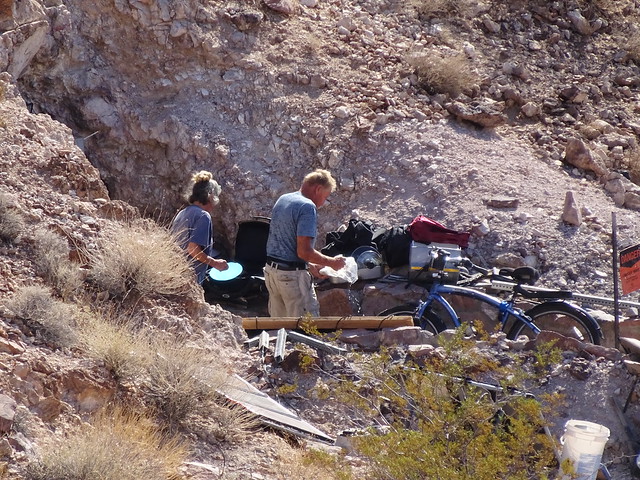 We continued around the mountain, with a nice look at US 95 coming into view to our south. 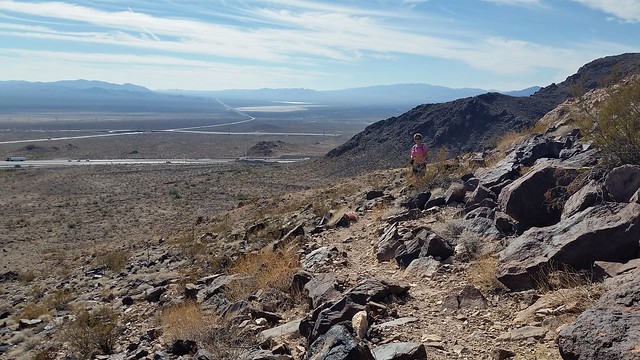 The view to the south

We continued up the canyon along the Cascata Golf Course to our east.  Cascata is a very exclusive course that is open to the public, if you’re willing to pay $395 for a round plus $50/player and tip for a fore caddie assigned to each foursome.  A fore caddie doesn’t carry your bag, you have to take a cart.  The caddie walks with the group and rakes traps and tends the pin. 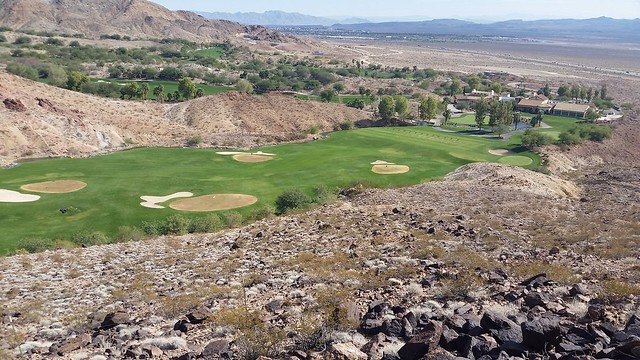 The driving range at Cascata

You can’t see the golf course from the highway but you can see what looks like a waterfall on the mountainside behind it.  The trail went up a hill right across from the waterfall so we were able to get a closer look at it. 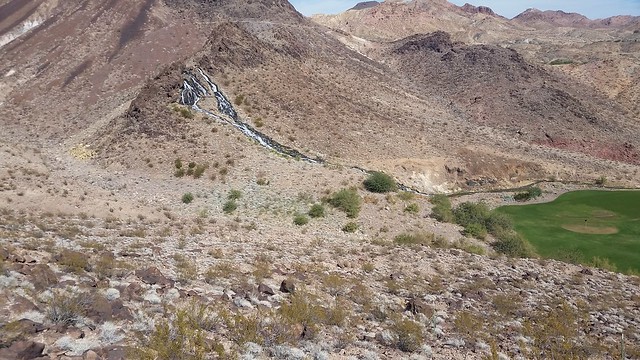 The water is pumped up there through a pipe hidden in the mountain to create a stream that runs right through the clubhouse. 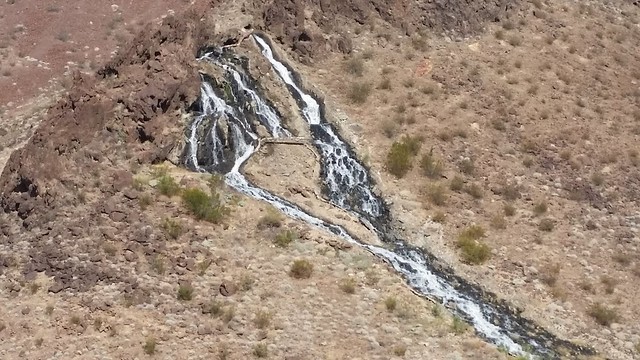 Where does the water come from?

The trail went up into a canyon, then turned and came back out going over the top of the waterfall. 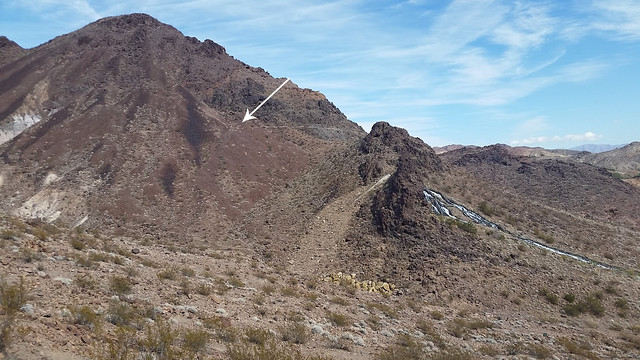 The arrow marks the trail ahead of us 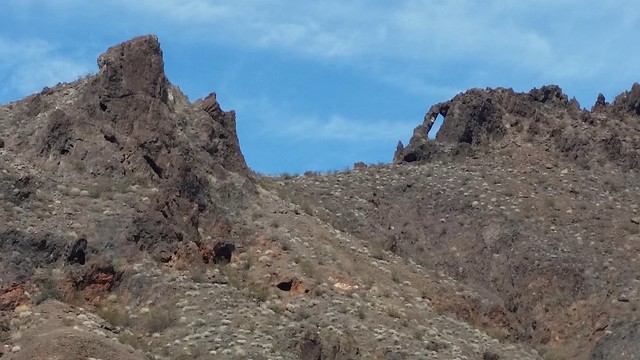 An arch sits above the trail 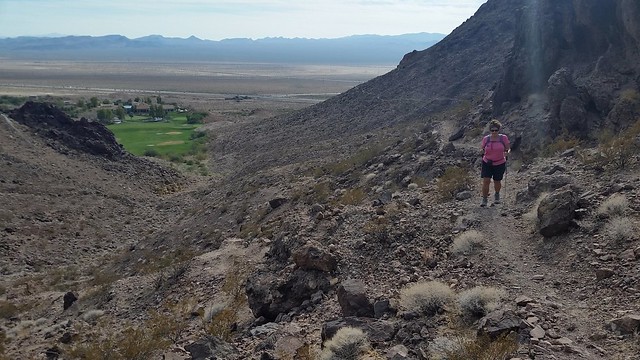 Hiking up past the golf course

As we hiked around the hill over the waterfall we could hear noise in the rocks above us.  We looked up and saw the fella in the photo below looking down at us. 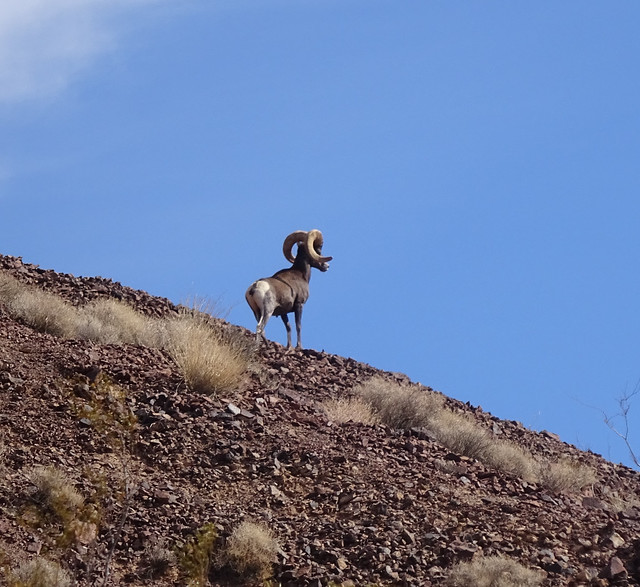 He watched us for a couple of minutes before scampering up over the hill. 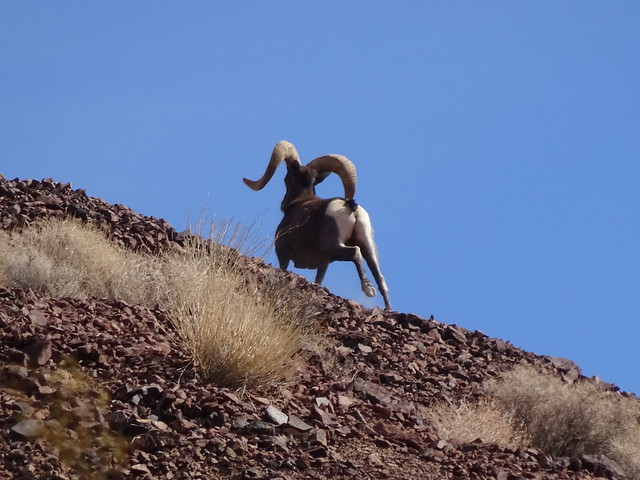 We rounded a bend to a point where we could again see the golf course driving range below us.  A look through the binoculars revealed a group enjoying a vegetarian lunch on the range. 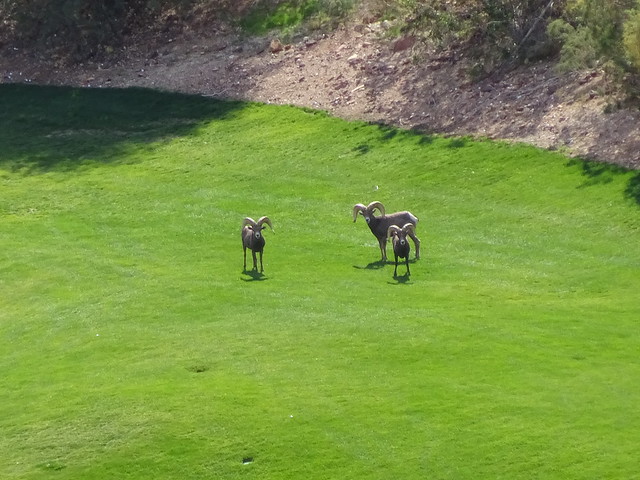 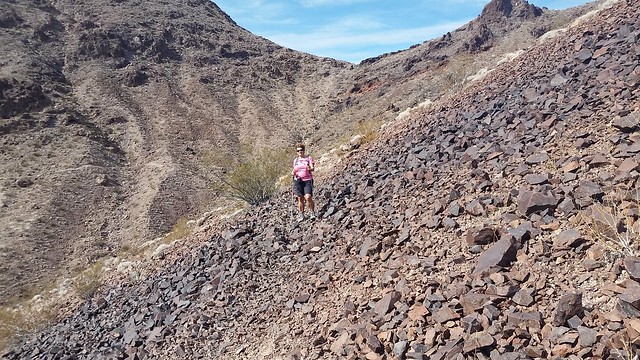 Scree field along the trail 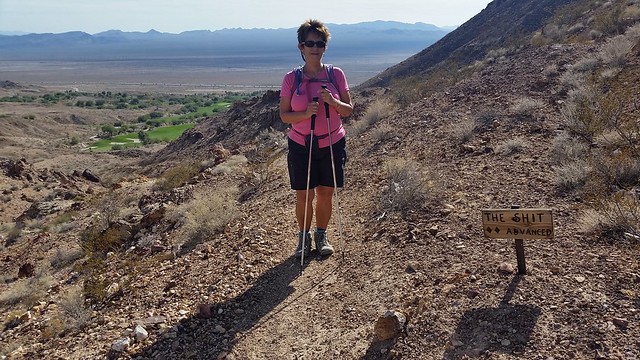 Junction of the Sh*t Trail and Ernie’s Trail 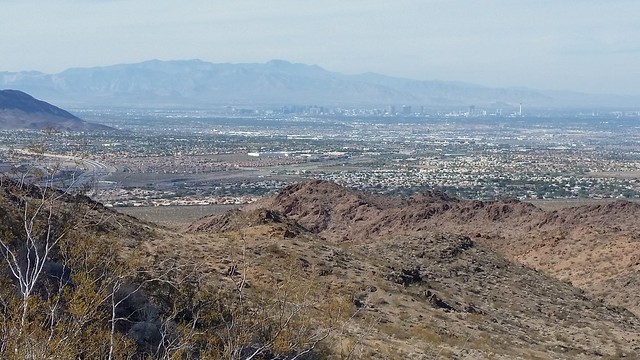 That wraps up our stay in this area.  We really enjoy Boulder City and will definitely return in the future.  We have no plans to settle down in the near future, but when we do this  town is high on our list of potential locations.

Next up is a stay in Bullhead City, about 80 miles to the south on the Arizona side of the Colorado River.  More on that later . . .

14 Responses to The Strip, a Golf Tournament, and some Hiking around Las Vegas